The 30 Funniest Tweets About Parenting

Laughter is the best medicine, but Twitter's a close second.

Between tackling tantrums, re-learning all that math you haven't touched since elementary school, and trying to actually get your teenager to talk to you, parenting is no easy feat. However, despite its difficulties, these celebrity moms and dads have taken to Twitter to prove that, no matter how much baby vomit you're wearing or how much crayon you have on your walls, you can still come out the other side with your sense of humor intact.

If you need a laugh (or a break from your own offspring), these hilarious tweets about parenting from celebrities are sure to crack you up. And for more absurd humor, enjoy the 50 Puns So Bad They're Actually Funny!

Chris Pratt wasn't above getting in a jab at his infant son's sleepless nights. And when you need a little more amusement in your life, try out the 20 Funny Things You Can Ask Siri! 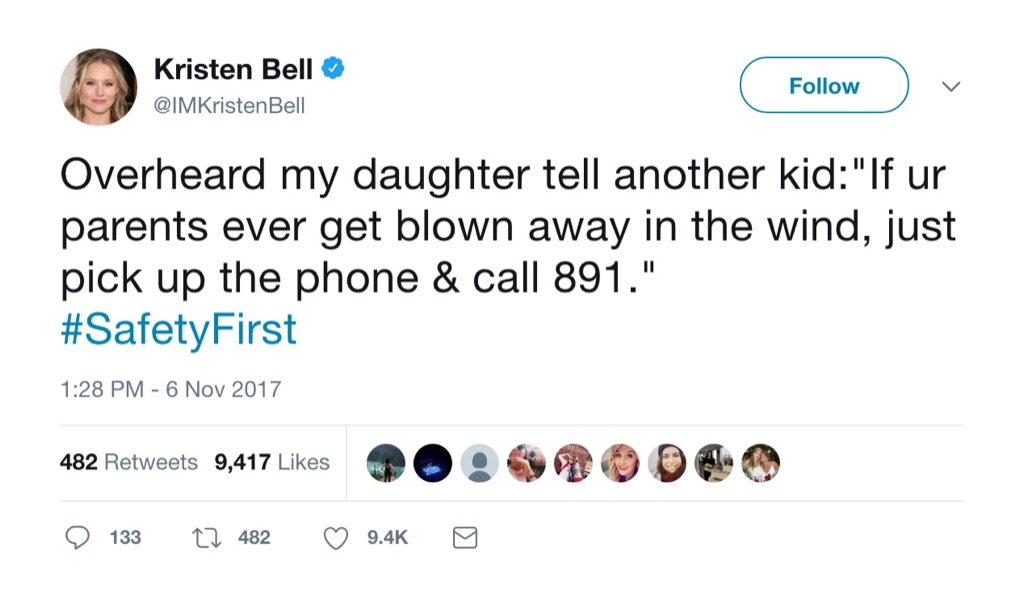 Kristen Bell's daughter certainly has creative ideas about how to react in case of an emergency. And about the likelihood of wind-related emergencies, in general. Think that's hilarious? Just wait until you see the 30 Worst Madame Tussauds Celebrity Wax Figures Ever.

Comedian Jim Gaffigan doesn't hold back when it comes to the peril of traveling with his son. And for more chances to crack up, check out the 30 Funniest Game Show Moments of All Time.

How I Met Your Mother star Alyson Hannigan isn't above admitting she needs a nap every bit as much as her kids do. For more silliness, turn to the 40 Facts So Funny They're Hard to Believe. 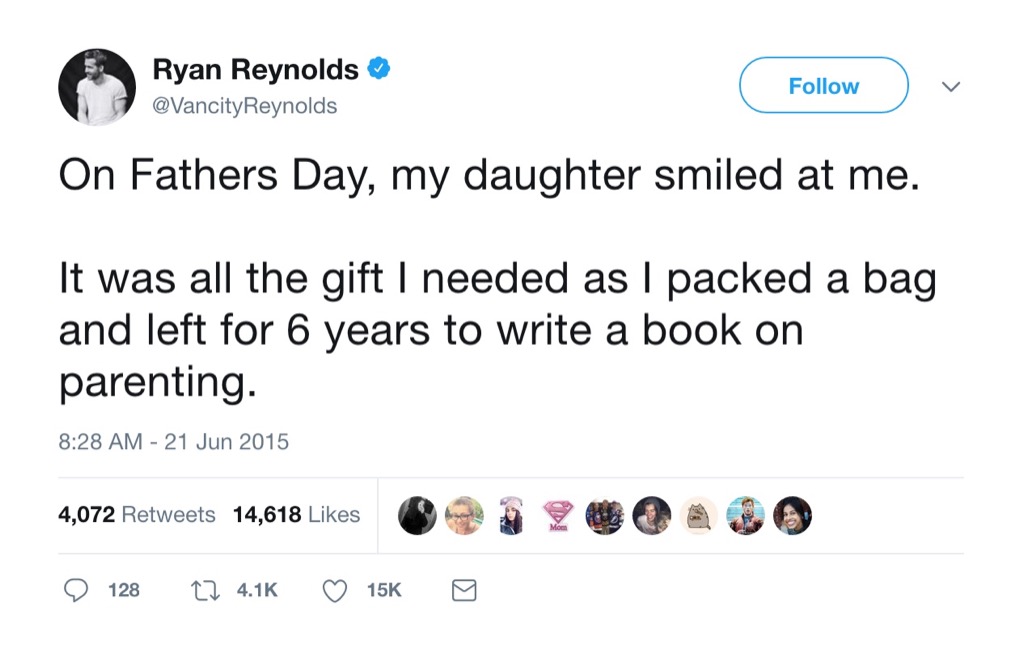 Consistently one of Twitter's funniest celebrities, Ryan Reynolds loves nothing more than joking about the all-to-relatable desire to bid farewell to his kids—for now, at least. Can't get enough of the Deadpool star's humor? You'll crack up reading Ryan Reynolds' 30 Funniest Tweets. 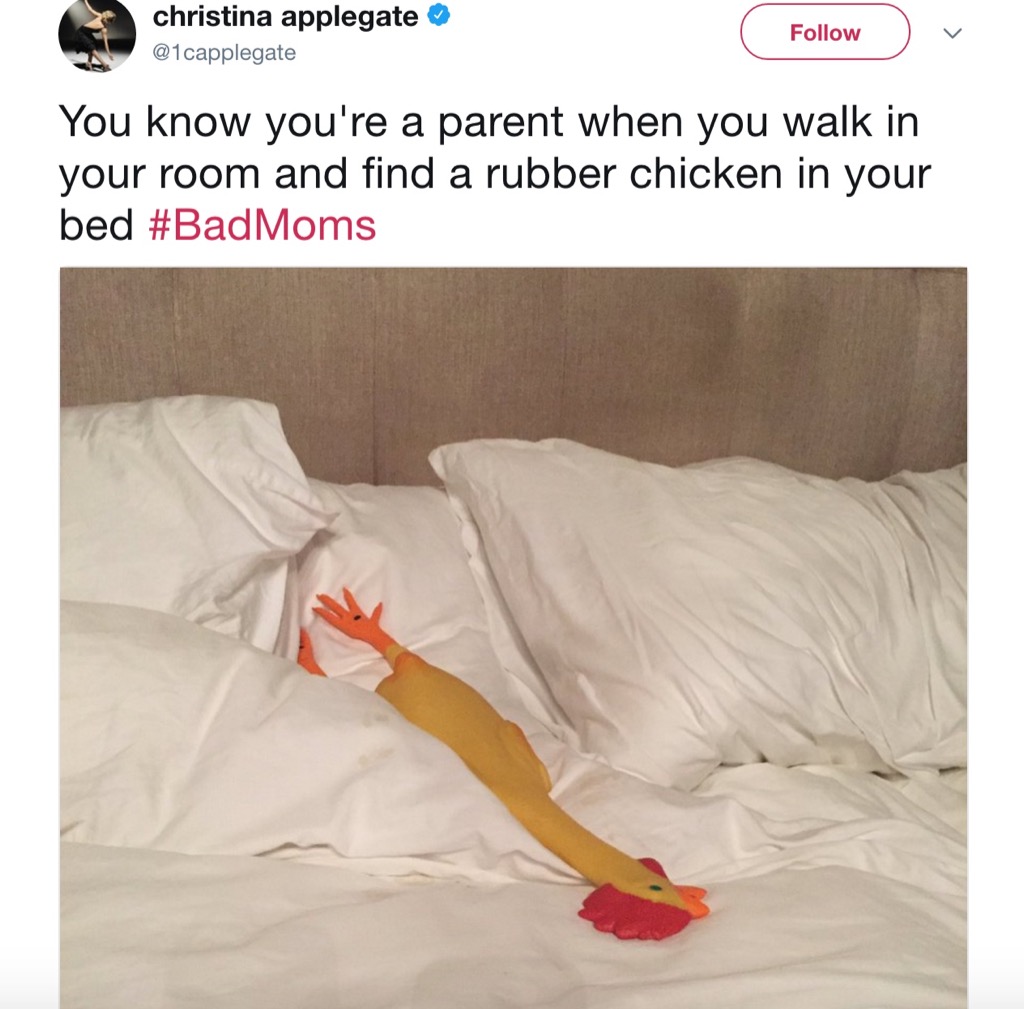 Conan O'Brien isn't above preparing his kids with painful, but necessary, life lessons. And for more on the intersection of parenting and social media, here are the 50 Instagram Accounts That Every Dad Needs to Follow. 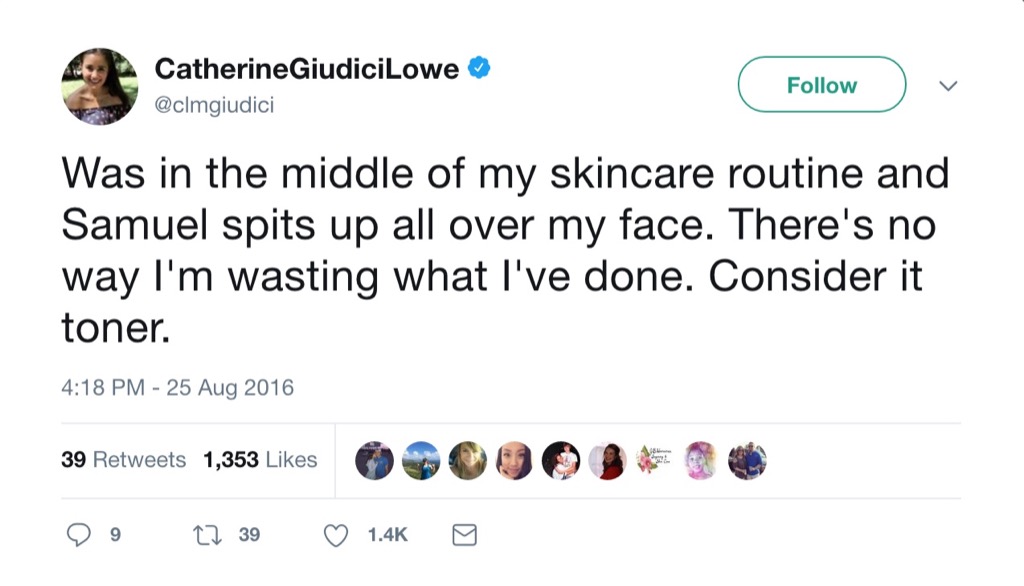 Is it worth it to start your whole skincare routine over because of a little baby spit? Not even close, according to Catherine Giudici Lowe. And hey: While we're discussing beauty routines, here are the 20 Beauty Products You Should Never Use.

James Corden wasn't about to share the spotlight with his wife, even if she was doing the bulk of the pregnancy labor, technically speaking. 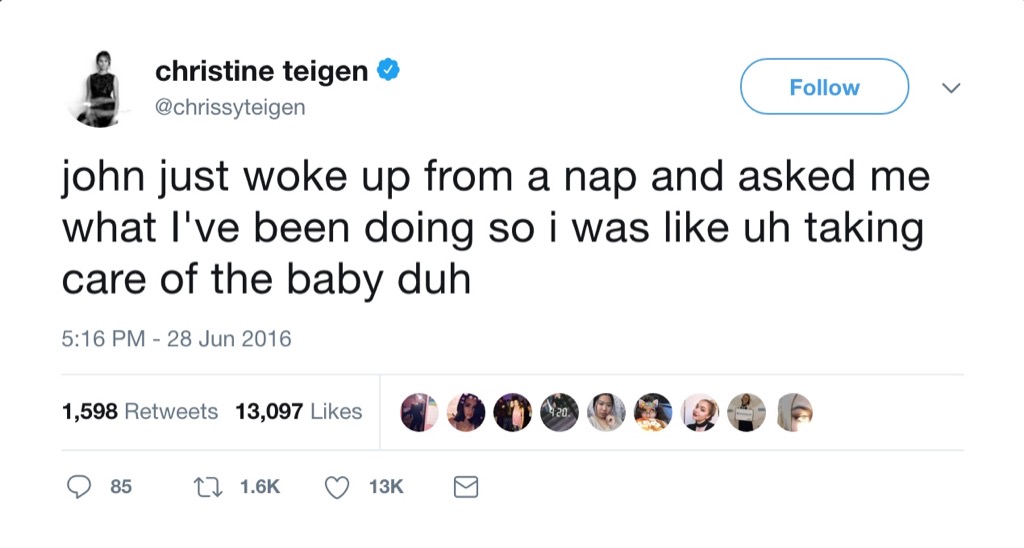 The supermodel gets real about the role moms tend to play in parenting versus the naps dads tend to take while they're doing it. Yes, Chrissy Teigen is definitely aware of the 30 Things Only Moms With Daughters Know. 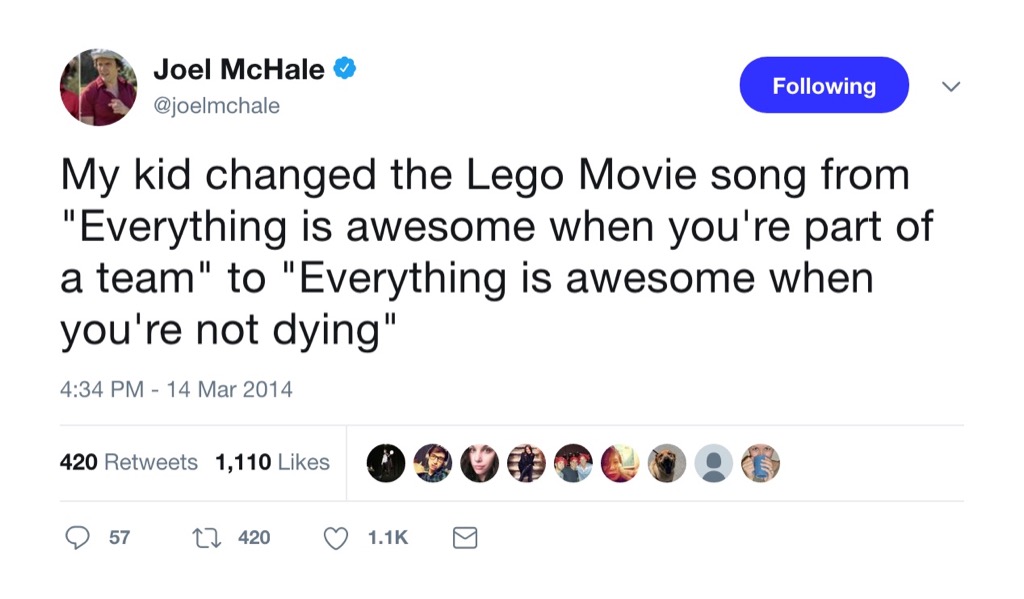 It doesn't have quite the same ring to it, but Community star Joel McHale's son isn't wrong, either. 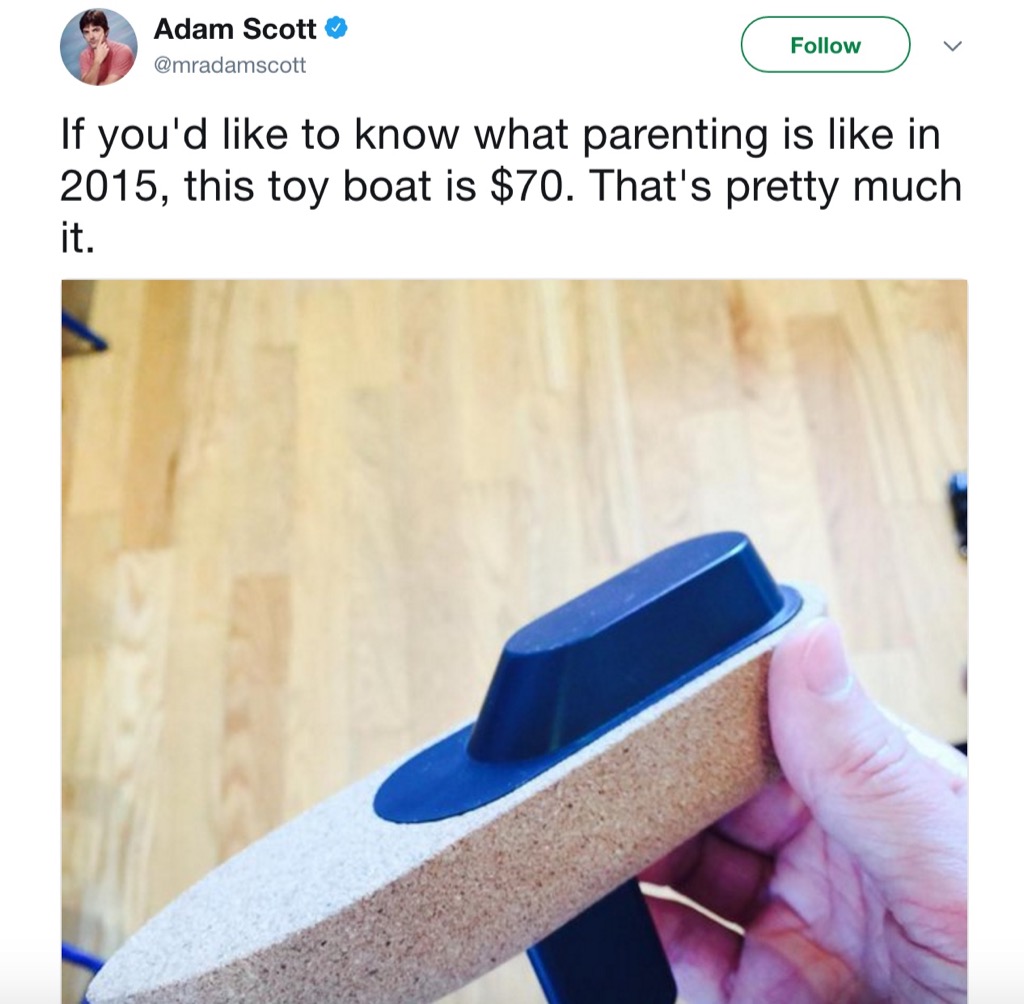 Even on his Parks and Recreation salary, Adam Scott knows that's too much money for a stupid boat. 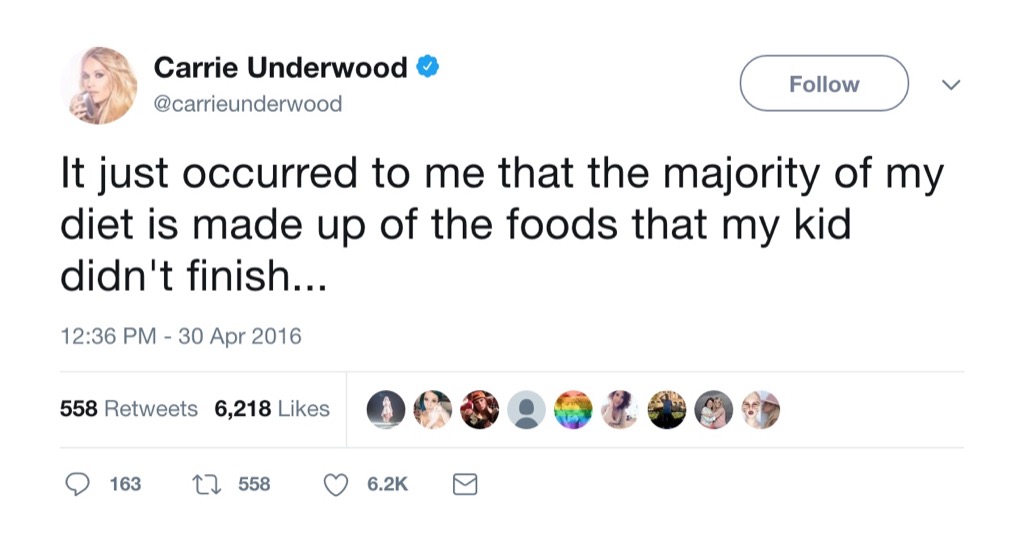 The secret for maintaining a Hollywood body? Eating only the remainder of other people's food, according to Carrie Underwood. 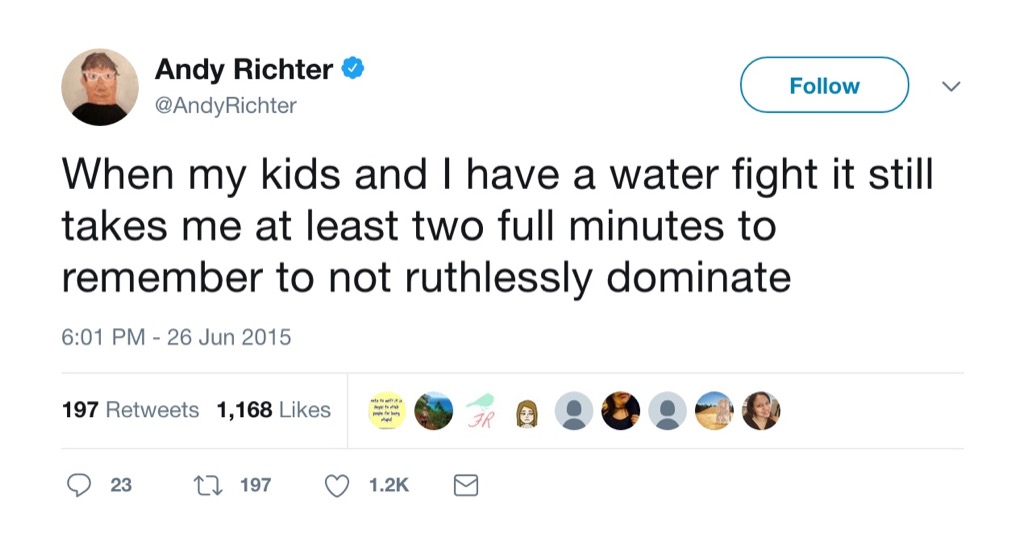 We can get behind Andy Richter's meditative, mindful parenting style. 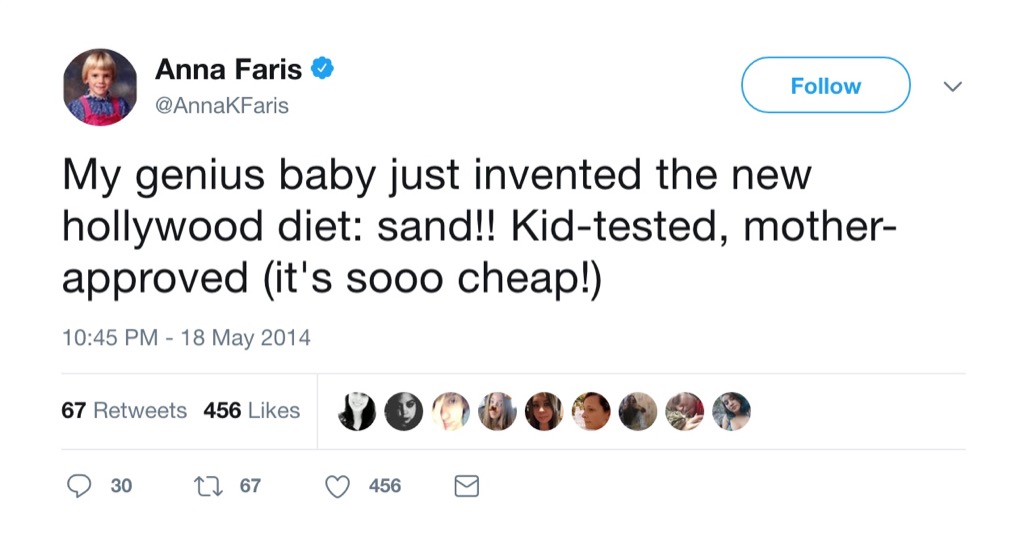 Just because you're a celebrity doesn't mean you're not into making economical meal. Just ask Anna Faris.

Jimmy Kimmel makes yet another excellent point about why you should never leave your newborn alone. And for more good, clean fun, here are the 50 Crazy Celebrity Facts You Won't Believe Are True. 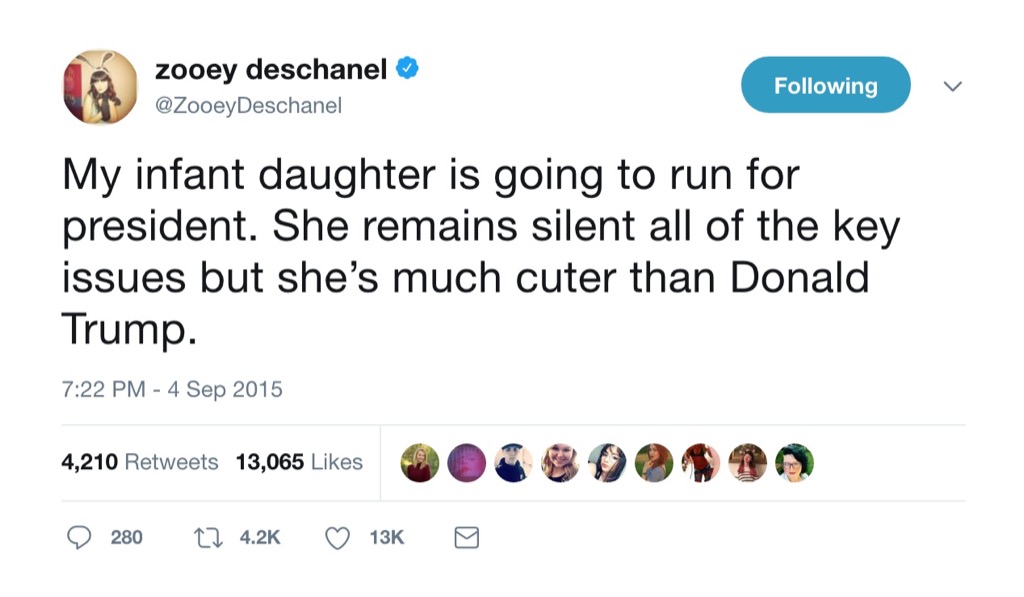 Zooey Deschanel isn't afraid to get political, especially when it comes to the cuteness of her baby daughter.

New Girl star Max Greenfield's daughter definitely has an eating philosophy most grownups can get behind. 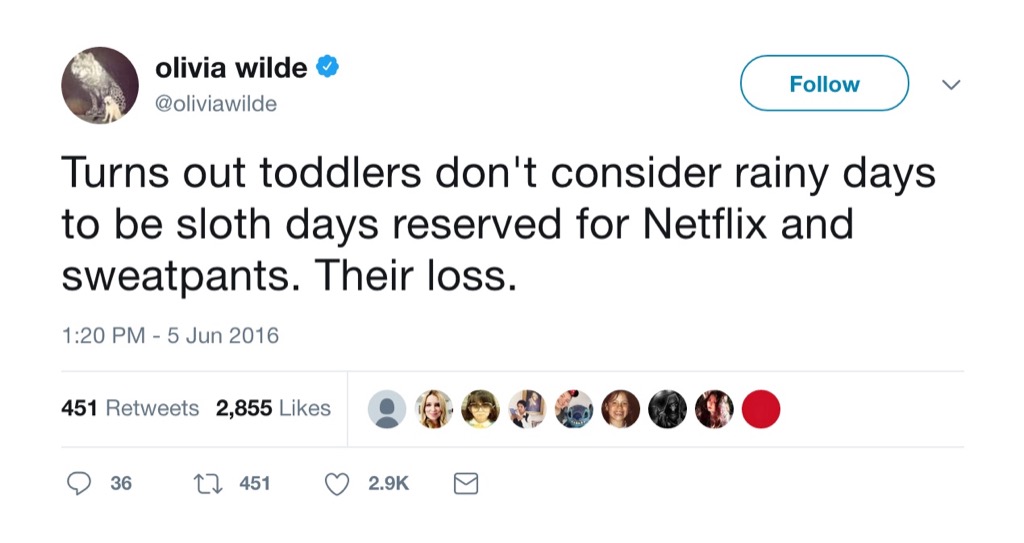 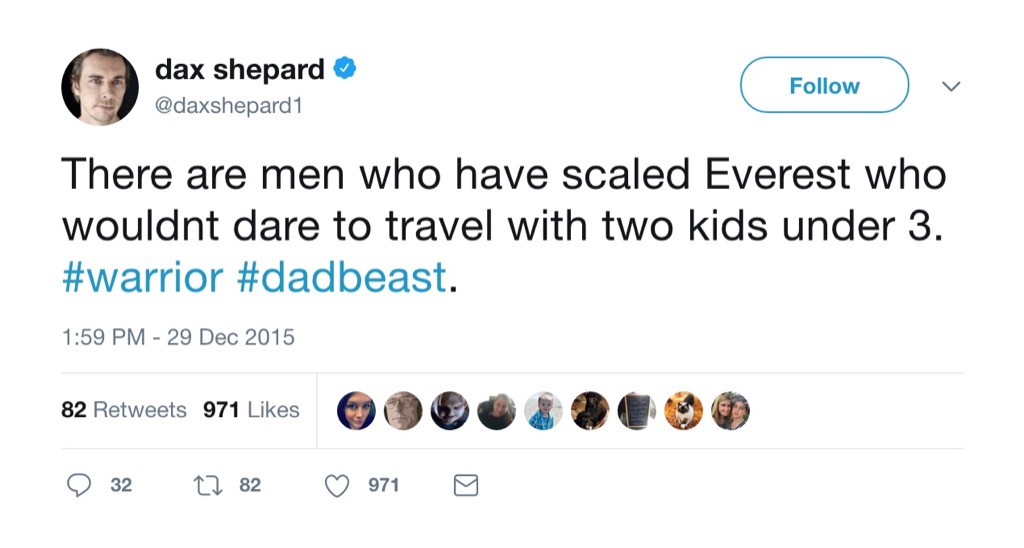 Dax Shepard doesn't mince words about the actual terror traveling with toddlers strikes into the hearts of most parents. 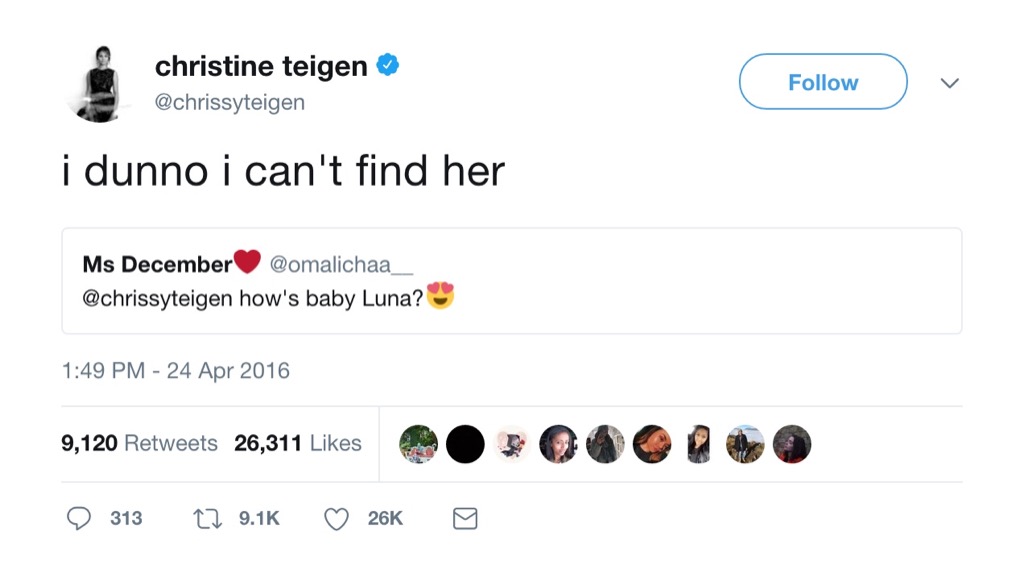 Chrissy Teigen wasn't about to engage with any online mom-shamers, so she headed them off at the pass with this funny quip instead.

The Hamilton creator gets real about the simple tastes of his son, Sebastian.

Even a glamorous designer like Nicole Richie still bears the physical and emotional scars of any battle-weary parent. 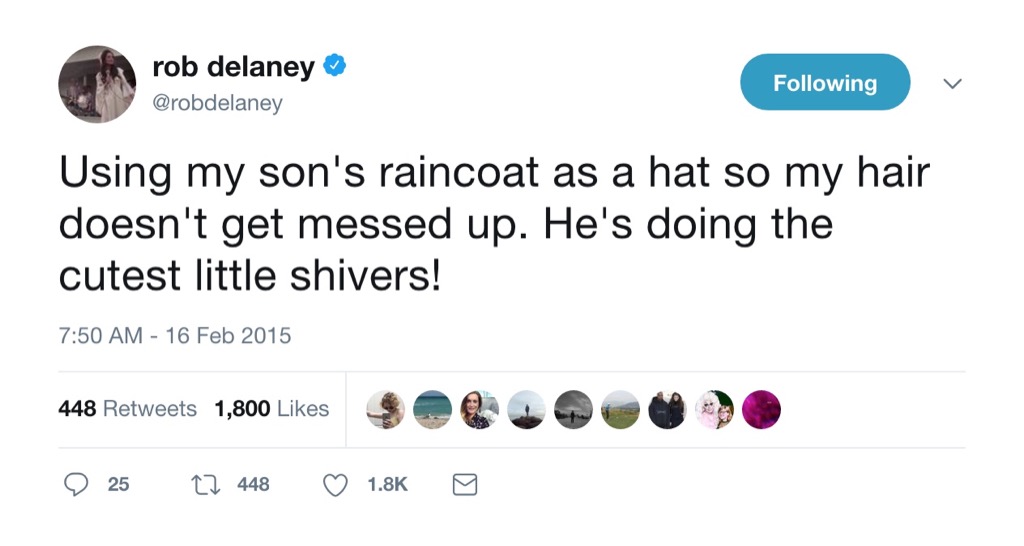 Comedian Rob Delaney wasn't above cracking this joke about his sub-par parenting skills. 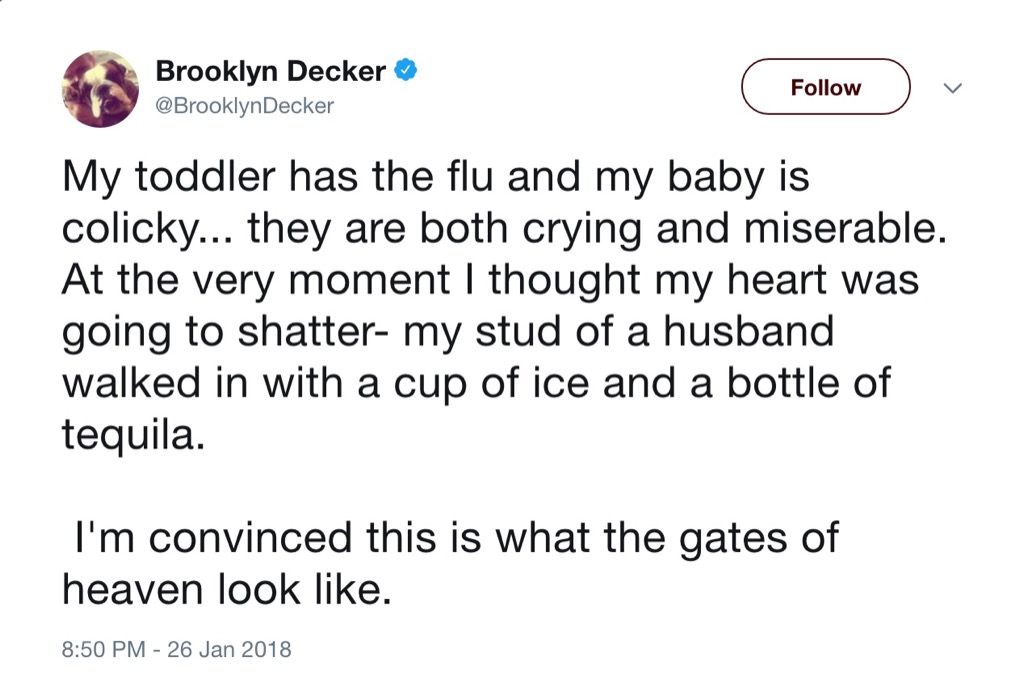 Grace & Frankie star Brooklyn Decker knows that there's no greater feeling than seeing your adorable children. Except seeing your husband at the door with some tequila, of course. 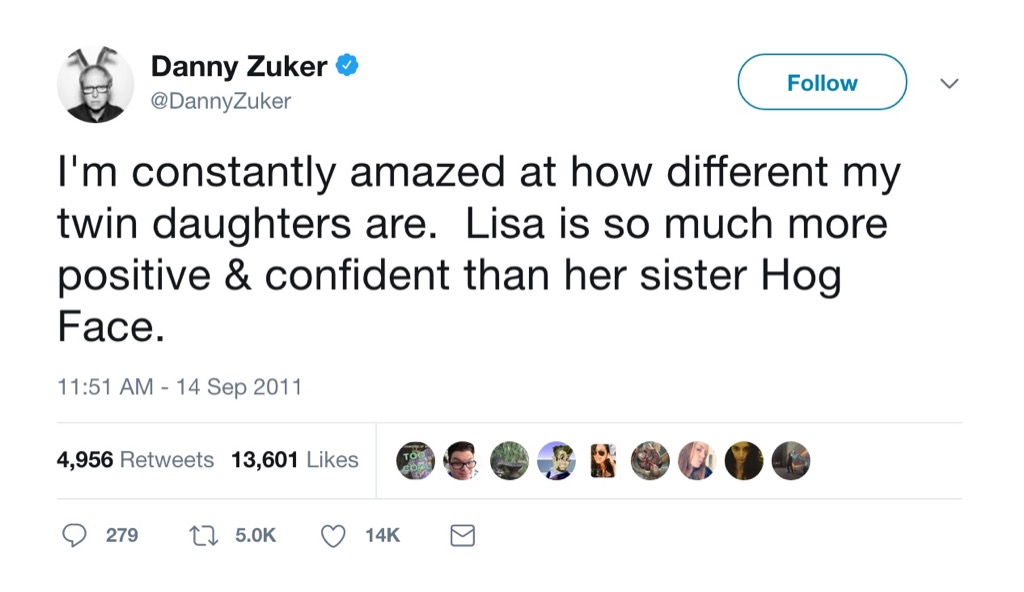 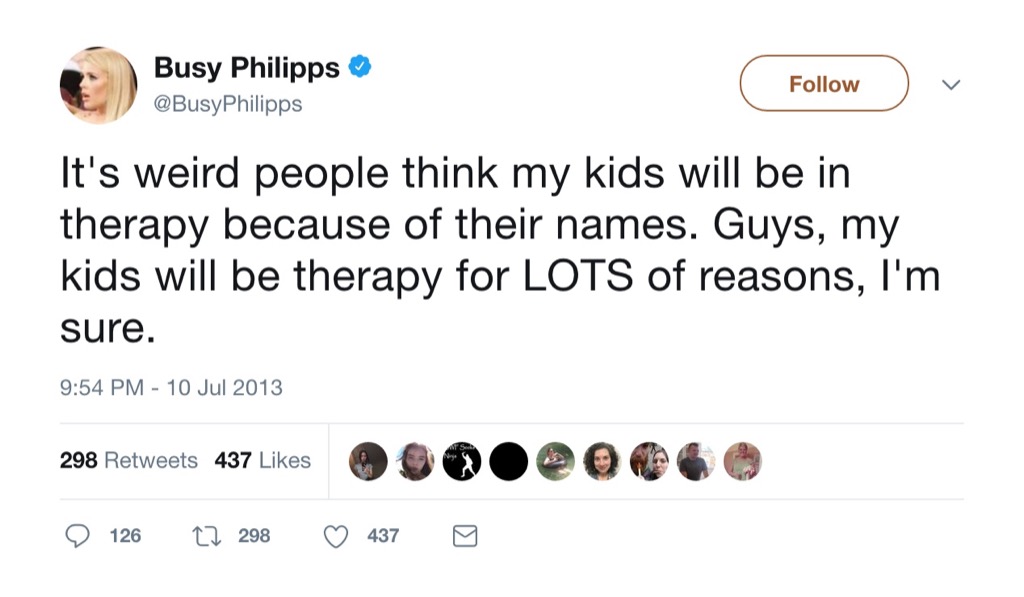 It seems the names Birdie and Cricket will be the least of Busy Phillips' daughters' problems. 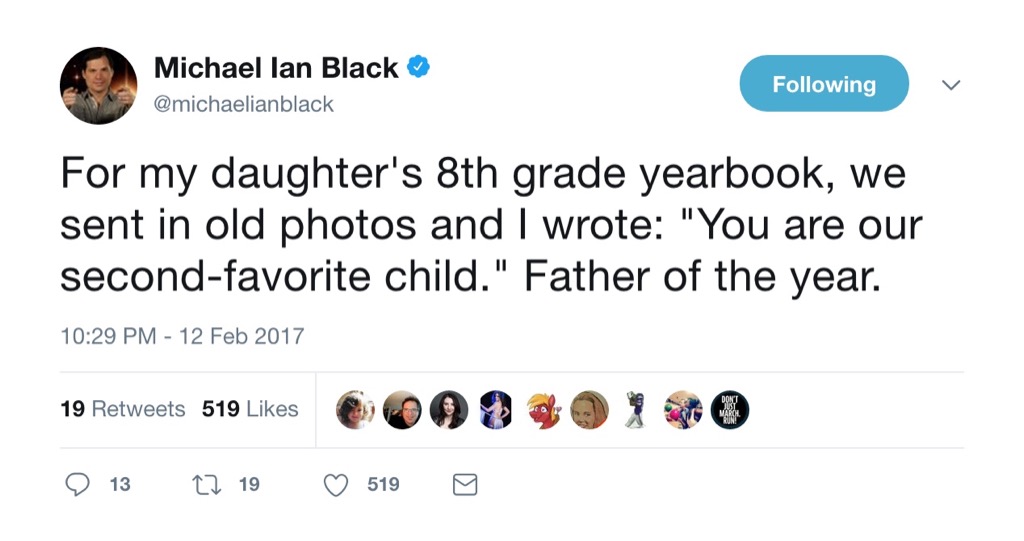 Michael Ian Black isn't about to let his kids get complacent by feeding them corny lines about loving them equally. 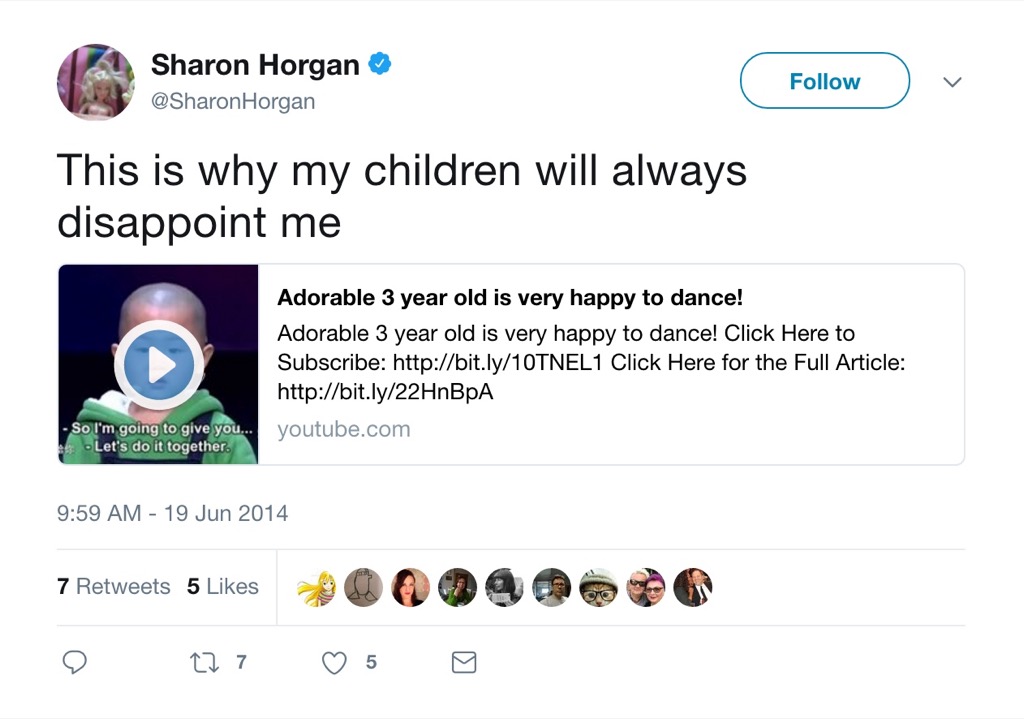 Sarah Crow
Sarah Crow is a senior editor at Eat This, Not That!, where she focuses on celebrity news and health coverage. Read more
Filed Under
Funny • Parenthood
Read This Next
Latest News
Read This Next