As anyone who has seen Deadpool, Waiting, or Van Wilder can attest, Ryan Reynolds knows how to deliver big laughs on the big screen. However, scripted roles aren't the only arena in which Reynolds' razor-sharp comedic talent shines. The actor has made a name for himself with his cutting humor on social media in recent years, delivering devastating burns to his fans, opening up about the messy realities of parenthood, and getting in some adorable jabs at wife Blake Lively along the way.

If you're having a bad day or just want to laugh until your sides hurt, these tweets are just what the doctor ordered. And when you want to make your own relationship as effortless as Ryan's, arm yourself with the 13 Best Marriage Tips from Blake Lively and Ryan Reynolds!

1
On the Joys of Fatherhood 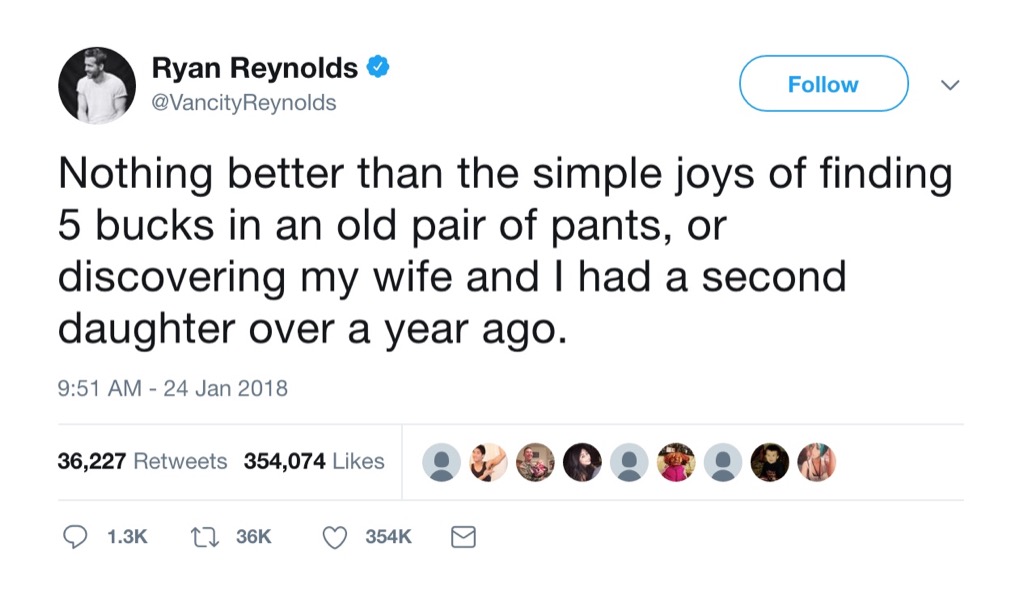 Finding money in unexpected places is the best. And parenthood is pretty cool, too, according to Ryan. And when you want to crack up some more, the 20 Things Everyone Secretly Finds Funny are sure to do the trick. 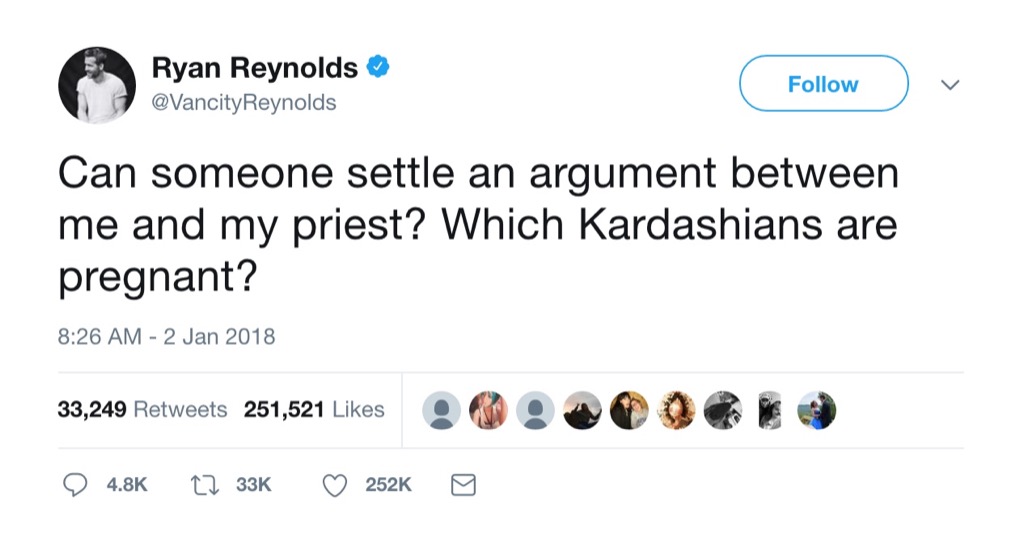 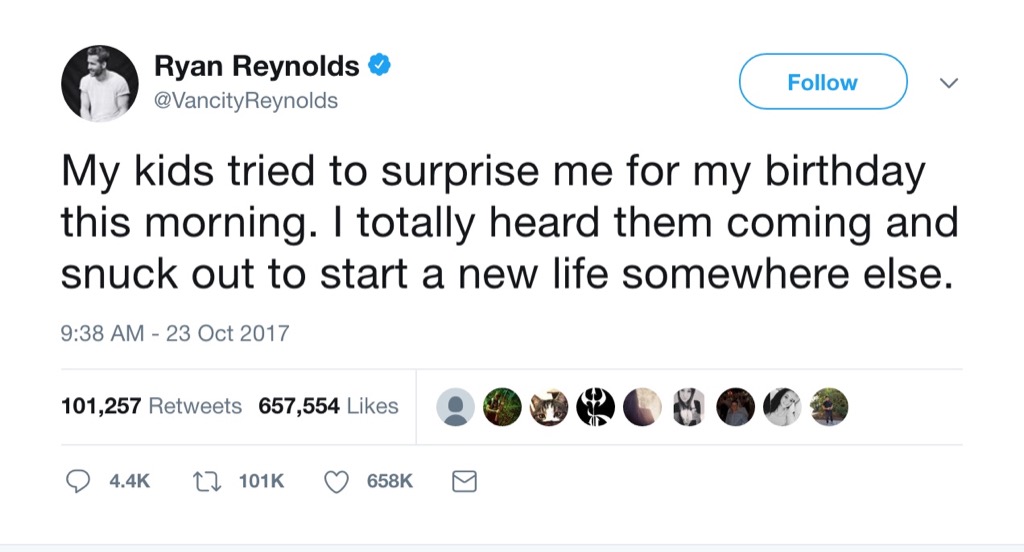 Parenting can be stressful. Fortunately, Ryan always has a backup plan. And for more sidesplitting humor, enjoy the 75 Jokes That Are So Bad They're Actually Funny. 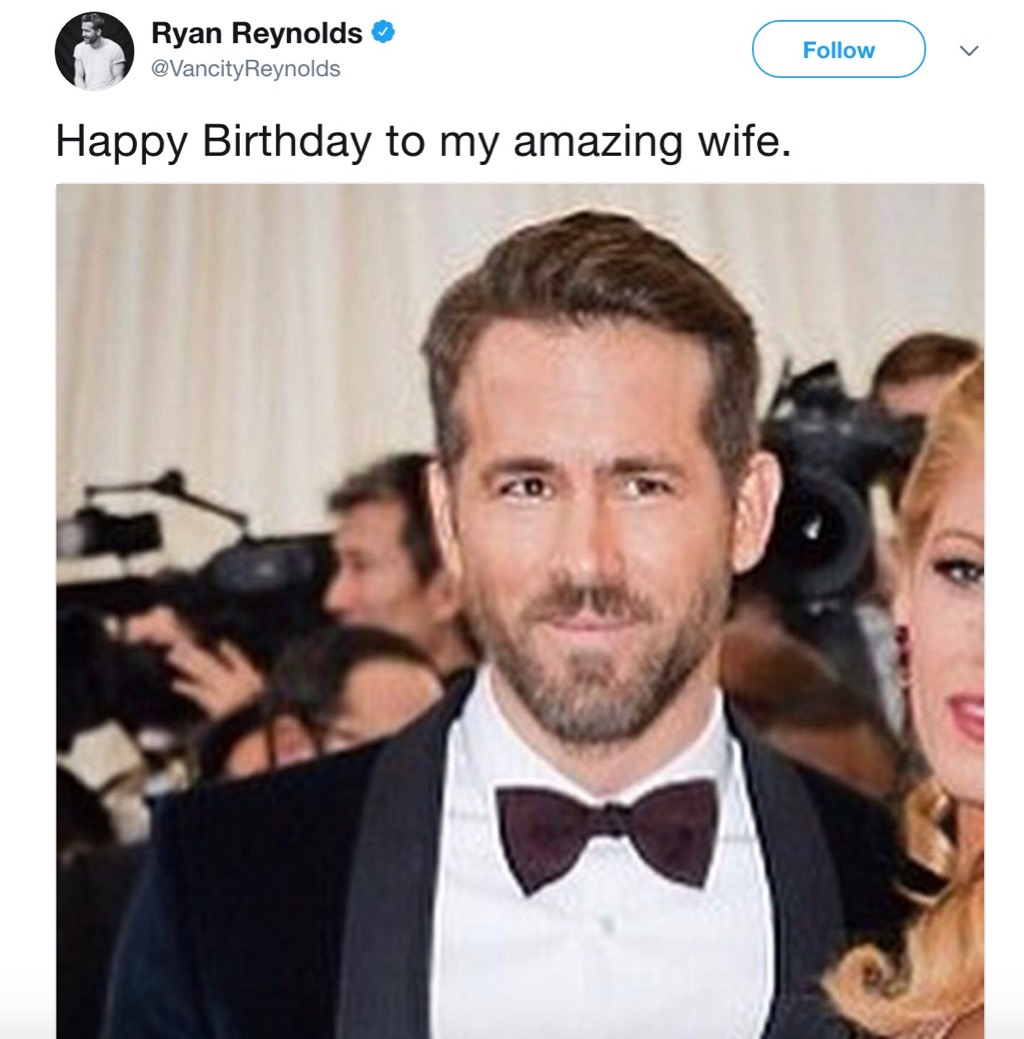 There's only space in the limelight for one celebrity, even in Ryan and Blake's marriage. If you laughed at that tweet, you'll love the 40 Facts So Funny They're Hard to Believe. 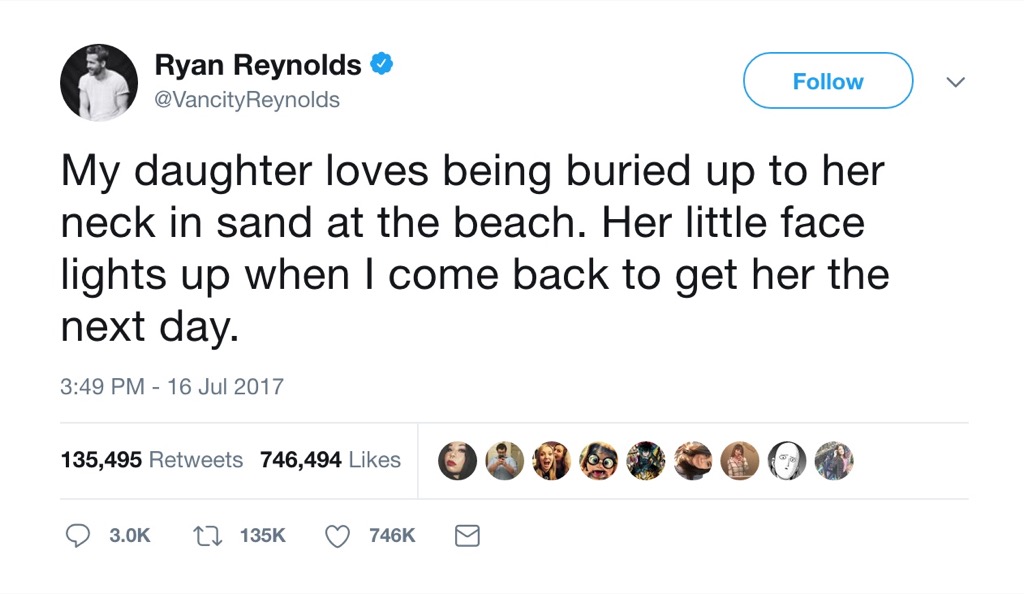 Ryan knows that the most important thing when watching young kids is ensuring their safety. And what's safer than immobility? And when you want to crack your own friends up, This Is the Best Way to Make Anyone Laugh.

6
On Being a Hero 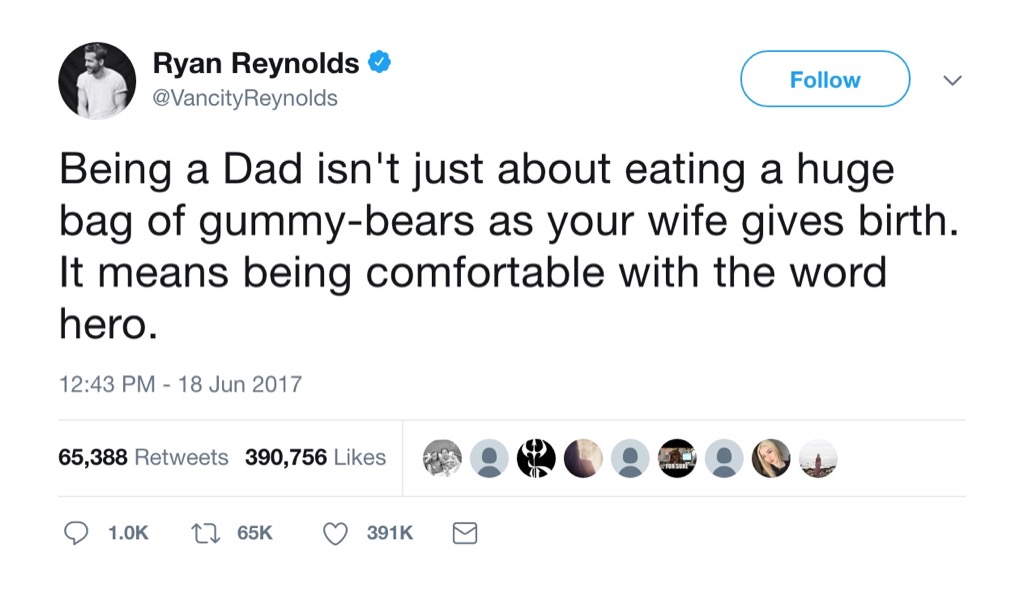 Hey, women aren't the only ones who have it rough during the birthing process. If that made you crack a smile, you'll be in stitches when you see the 30 Worst Madame Tussauds Celebrity Wax Figures Ever. 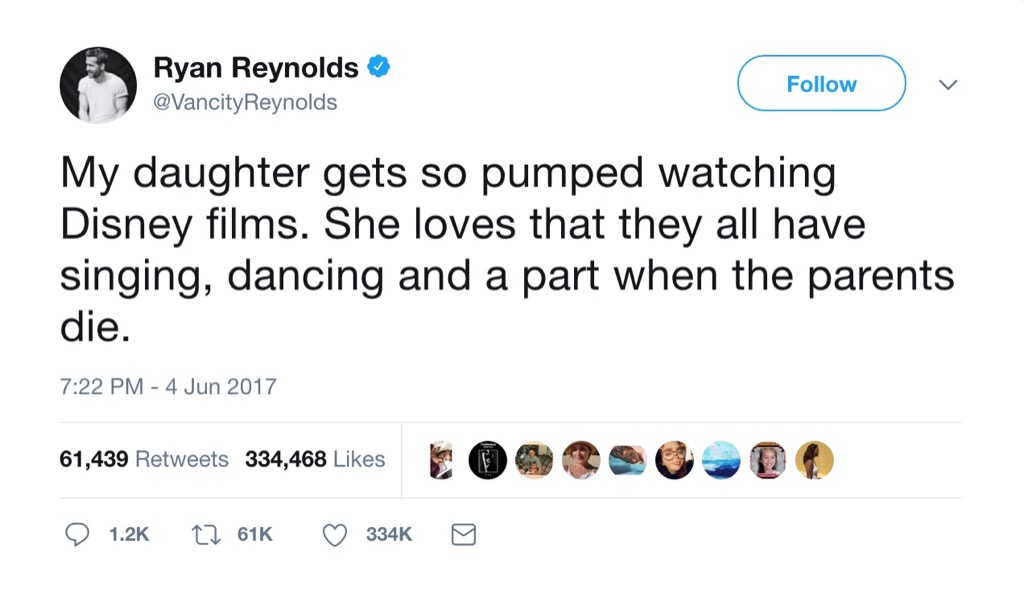 If you could get extensions from your college professors, it only stands to reason your partner should grant them, too. 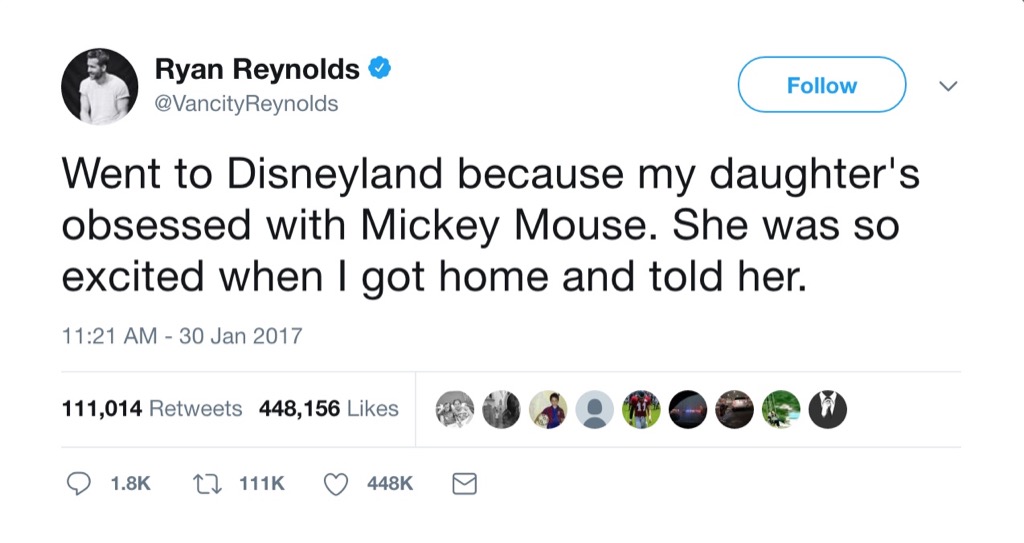 Being a good parent means sharing important experiences with your kids, but hey, Disneyland is expensive. 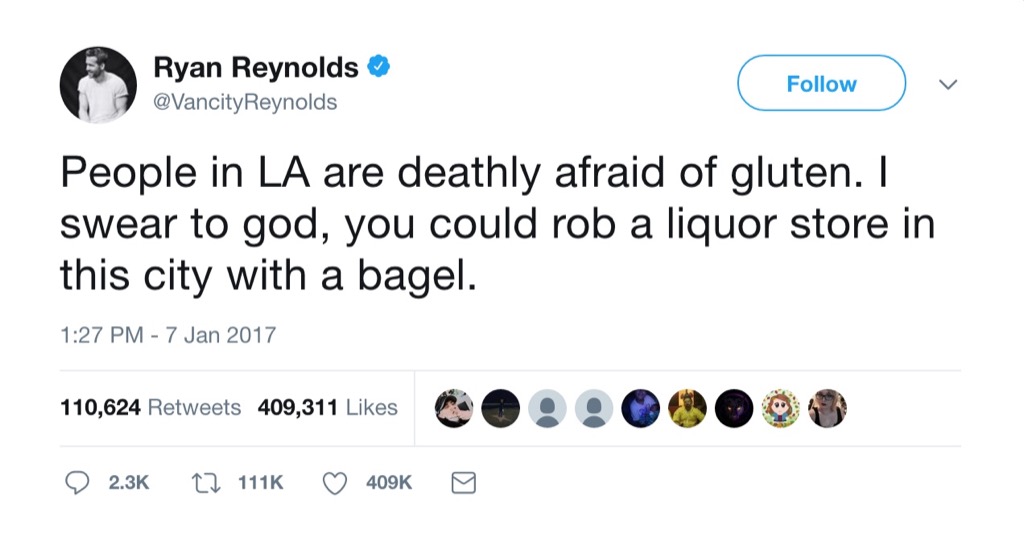 If acting doesn't pan out, Ryan can always make a killing with his bagel-based holdups. And if you want to make your own diet healthier, start with the 10 Healthiest Carbs That Won't Derail Your Six Pack! 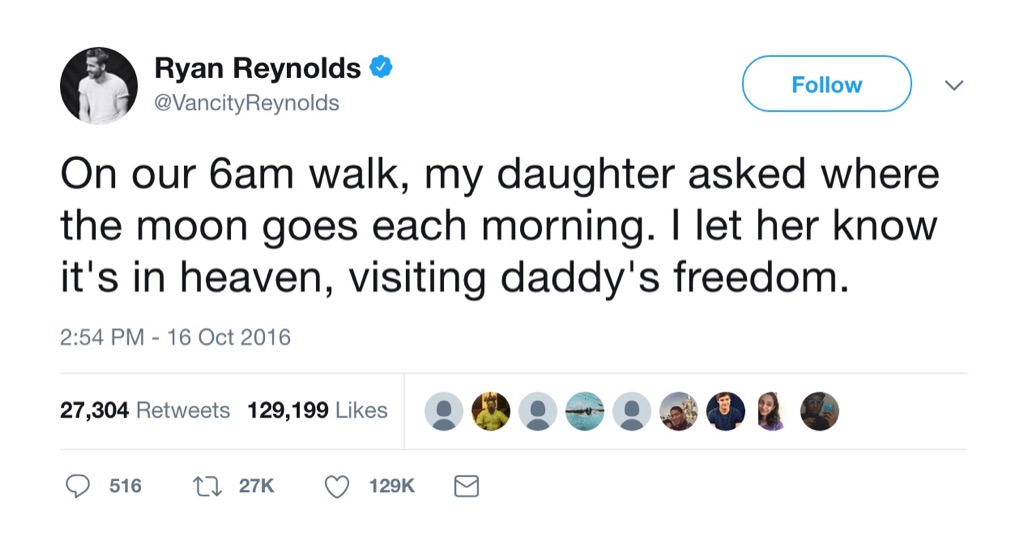 Parenting means sacrificing for your kids, especially when it comes to money and freedom. 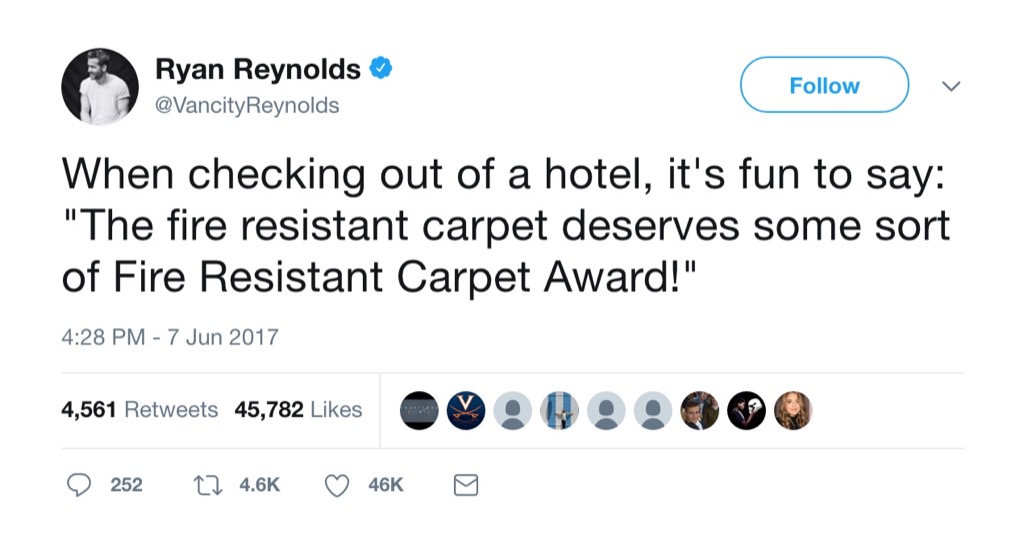 13
On Game of Thrones 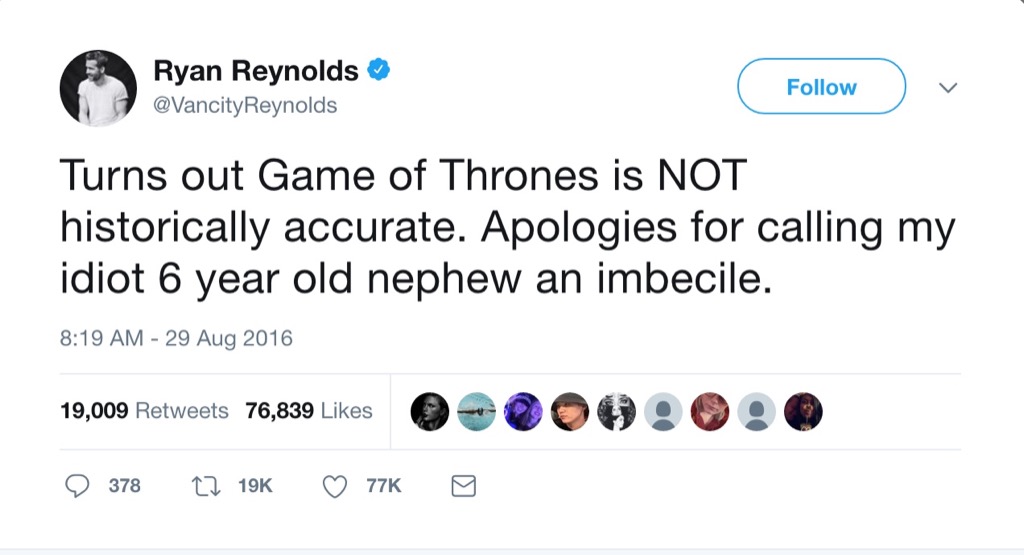 Ryan doesn't mince words, especially if you're a 6-year-old idiot. 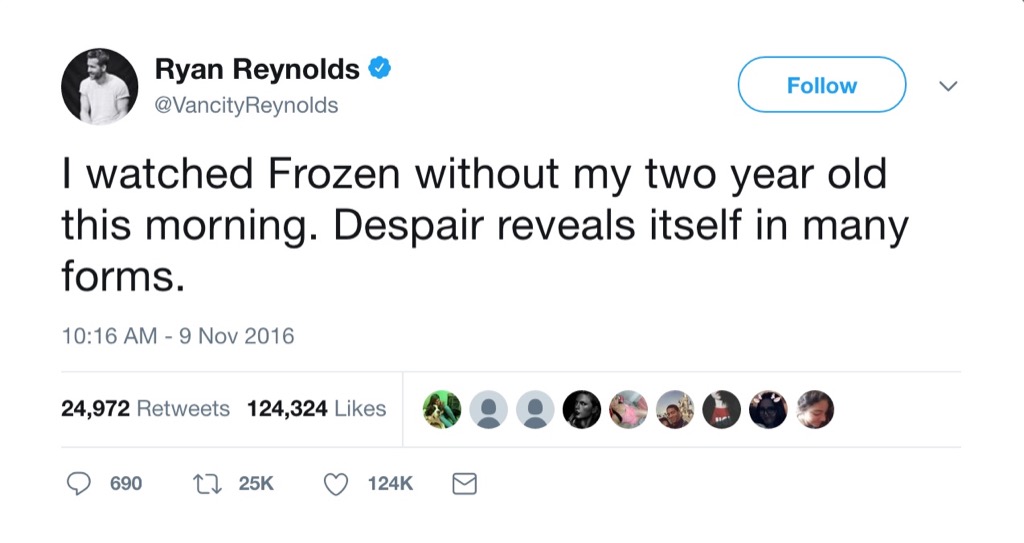 To paraphrase the actor: let it (it being the life you enjoyed before kids) go. 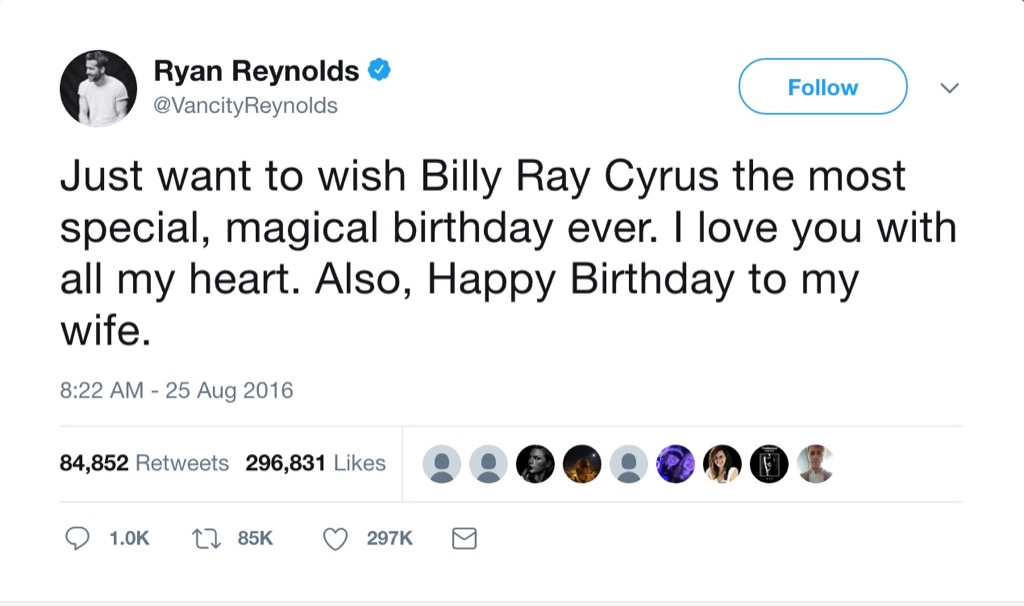 We hope this clever birthday tweet didn't leave Blake with an achy, breaky heart. And when you want to take some more inspiration from A-listers' romances, start with these 30 Best Celebrity Relationship Quotes. 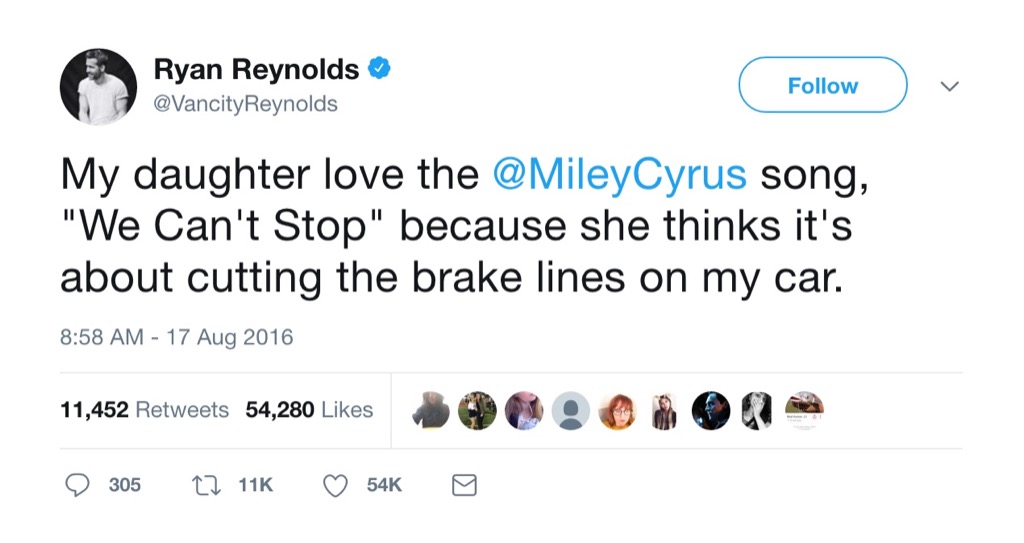 Humor, some light sociopathy, and a deep love for the Cyrus clan all seem to run in the Reynolds family.

17
On His Daughter's Milestones 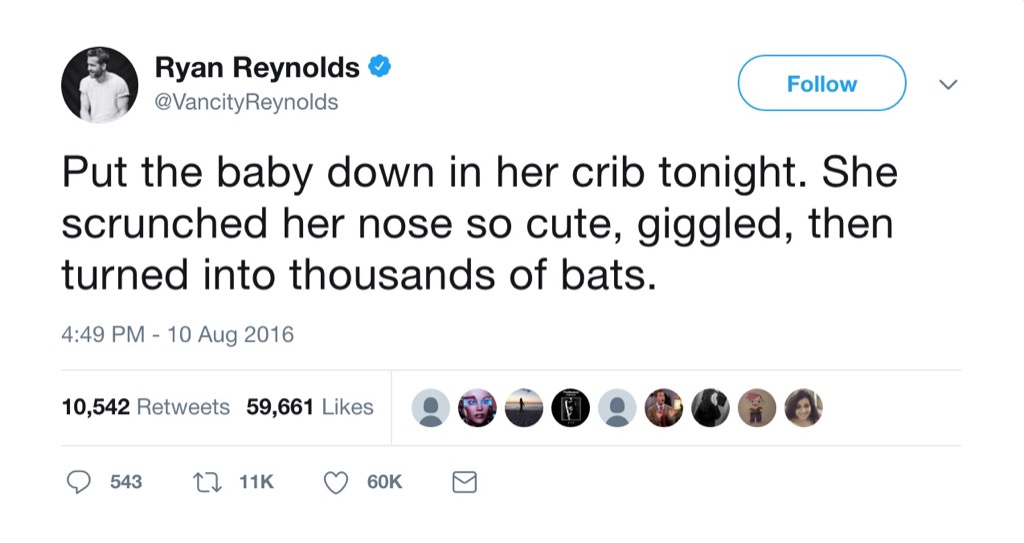 It's so cute when babies learn new skills, like vampirism.

18
On Getting the Snip 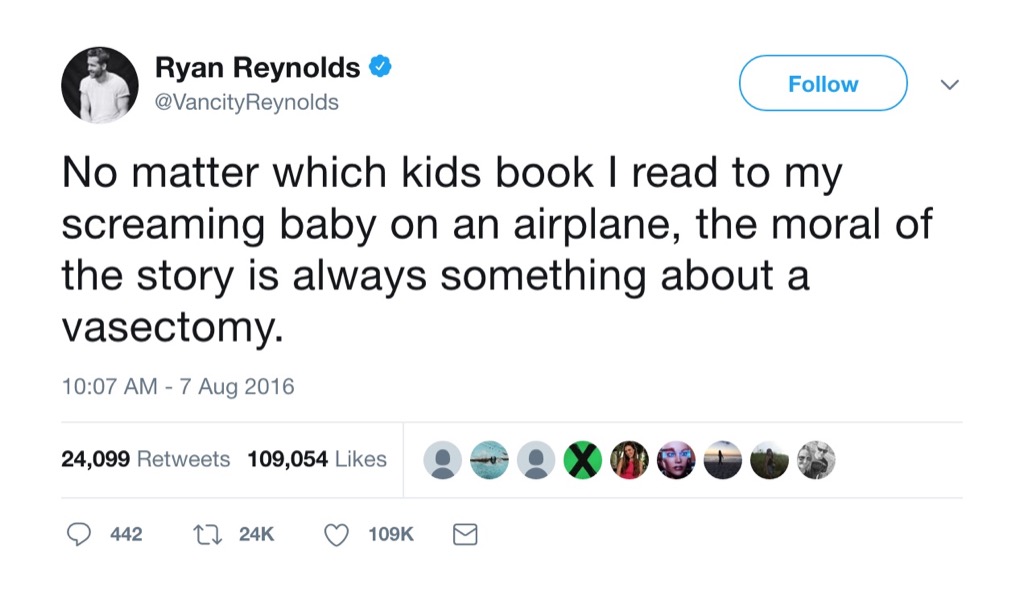 As Ryan makes clear, the only thing better than raising children is knowing you'll never have to do it again. 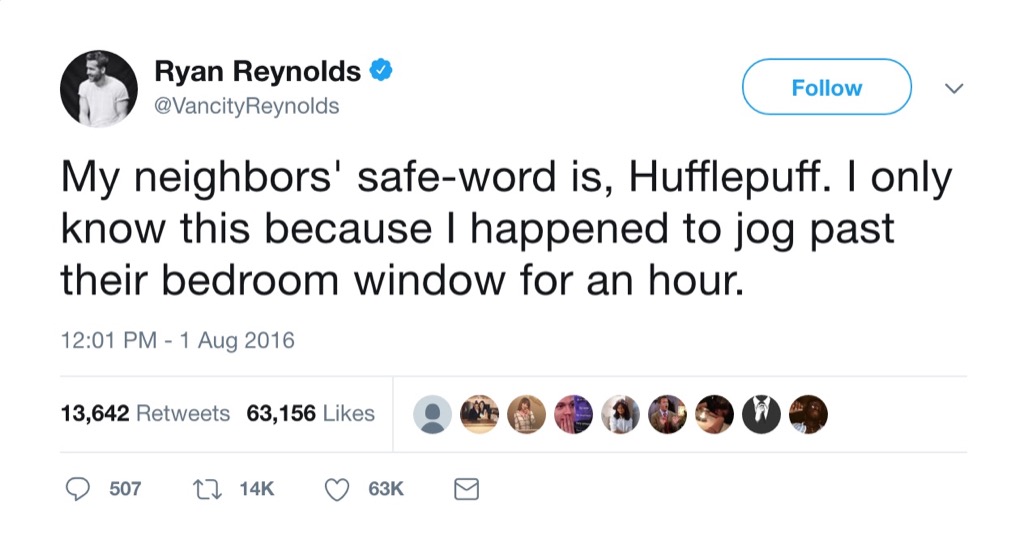 Ryan knows the importance of ensuring that everything's above board in the bedroom. Even when it's not your bedroom.

20
On His Parenting Priorities 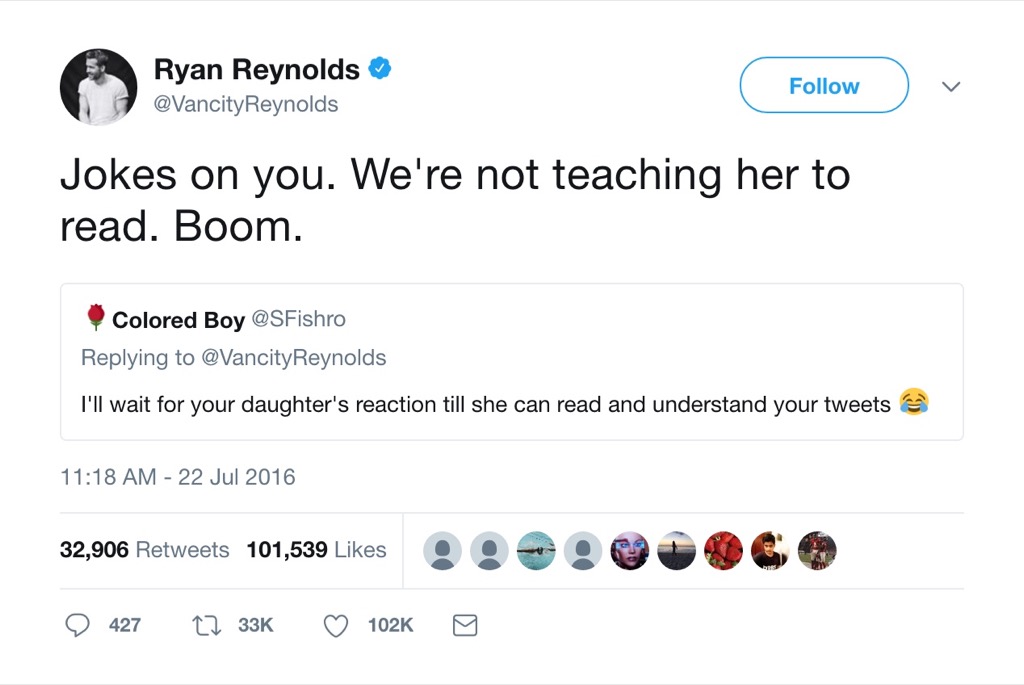 The actor wasn't about to let this fan think he'd gotten the last laugh about his social media presence.

21
On His Childfree Years 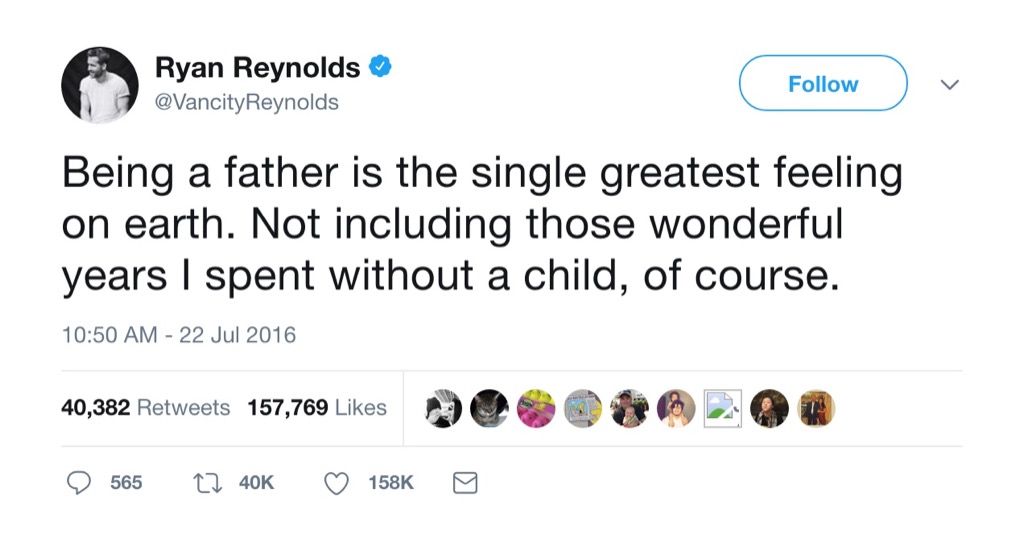 Raising children is wonderful, but being able to do whatever you want all the time is clearly better. 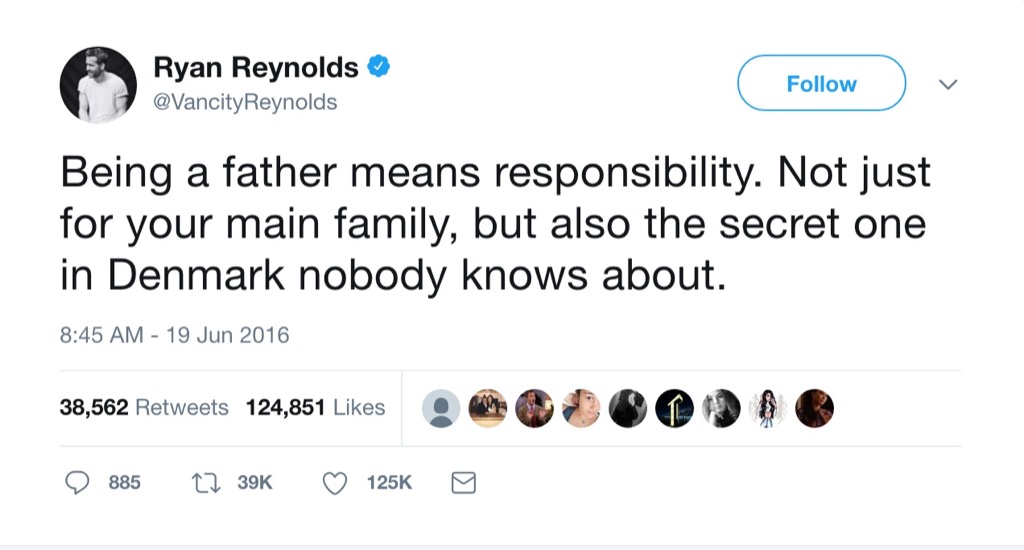 Ryan isn't about to let his career get in the way of his responsibility to his family, even if that means booking last-minute flights to Copenhagen at Christmas. And if you feel the need to keep somethings private, start with the 13 Secrets You Should Always Keep from Your Partner. 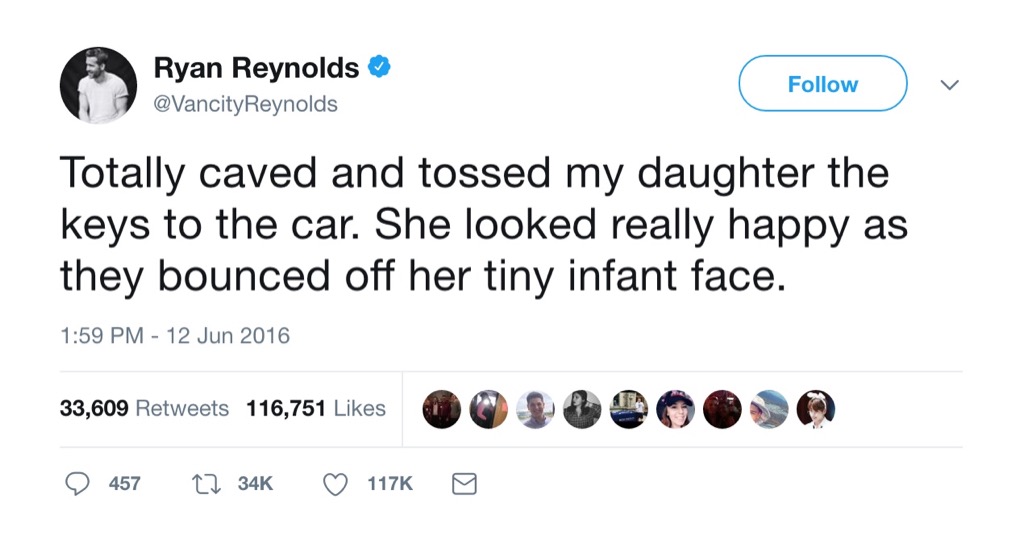 Teaching your kids to be safe on the road starts with plenty of practice, as Ryan and his lightly-bruised daughter know all too well. 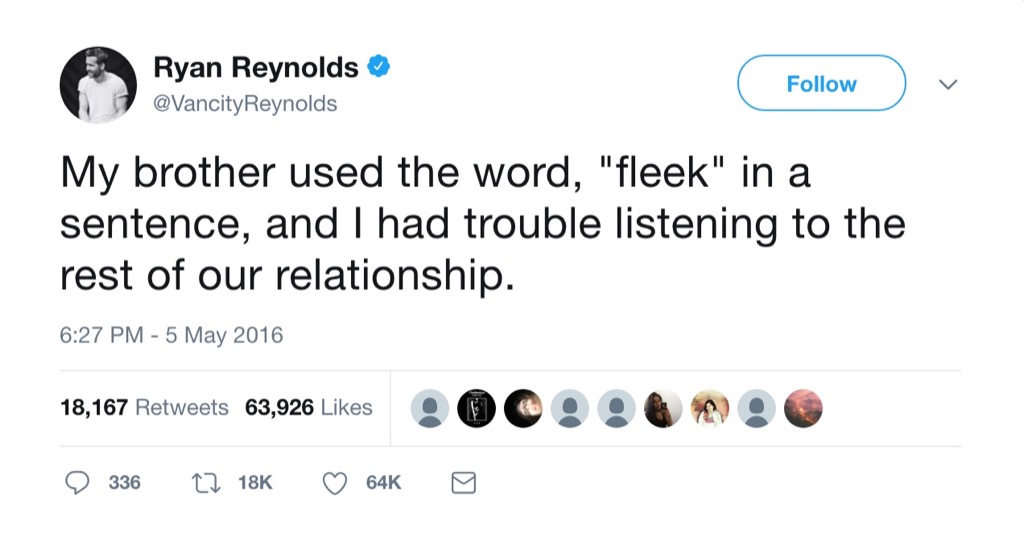 Note to self: dated slang will not pass muster in the presence of Ryan Reynolds.

Inner peace and inner torment all start in the same place. 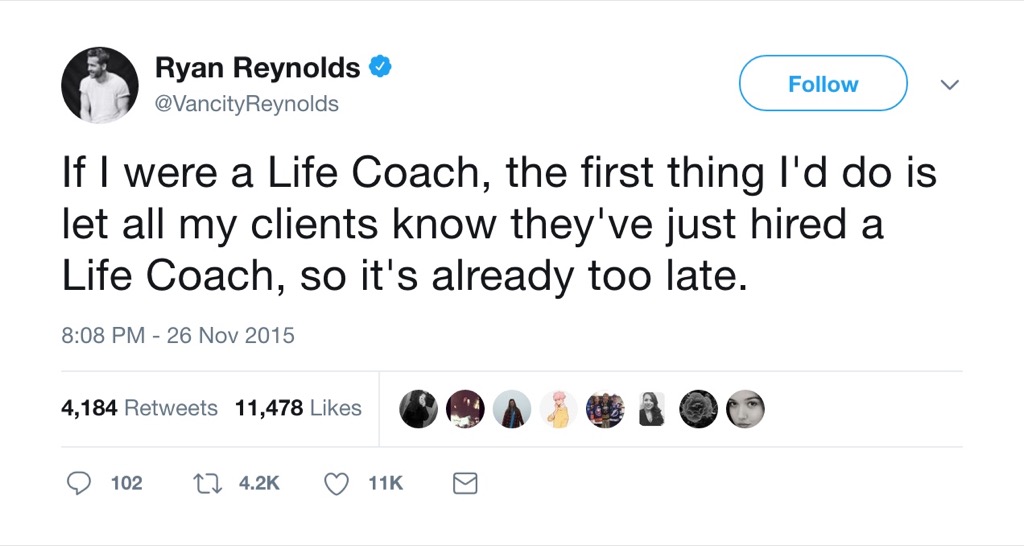 If you're hired a life coach, there's apparently no amount of life coaching that can help you. 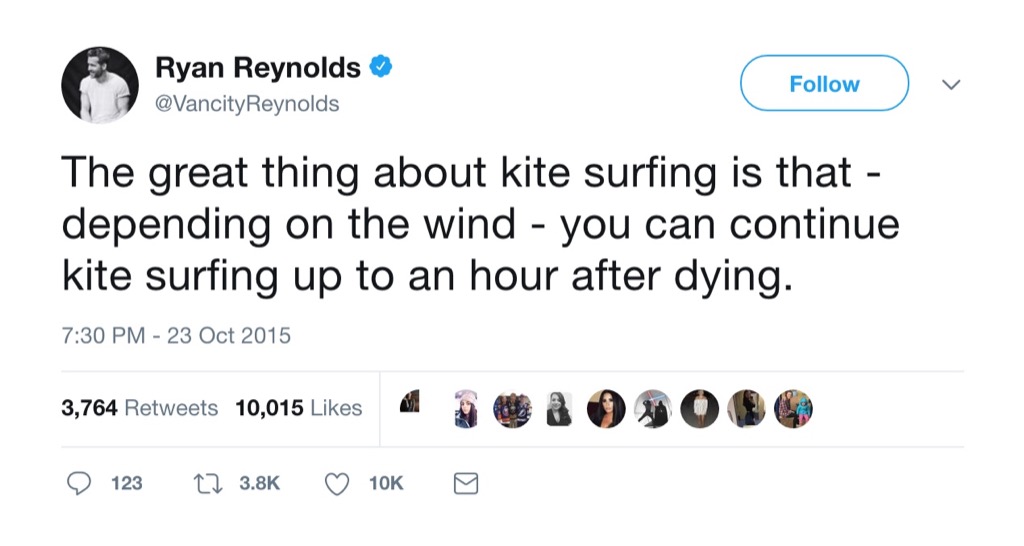 Having fun and traumatizing your loved ones and the staff at Club Med can go hand-in-hand, as Ryan pointed out in this hilarious tweet. 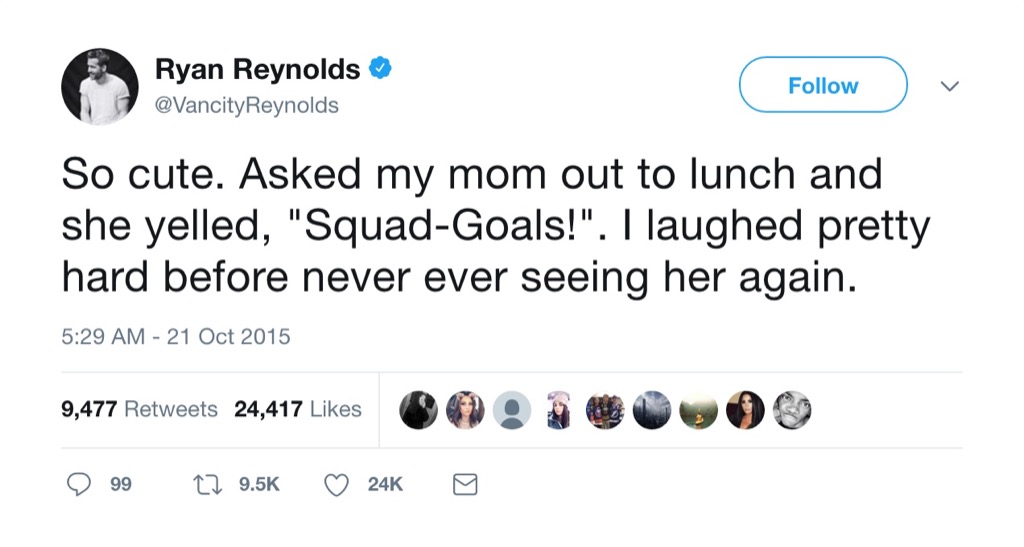 Cutting toxic people out of your life isn't always easy, but the Deadpool star knows when it's necessary. 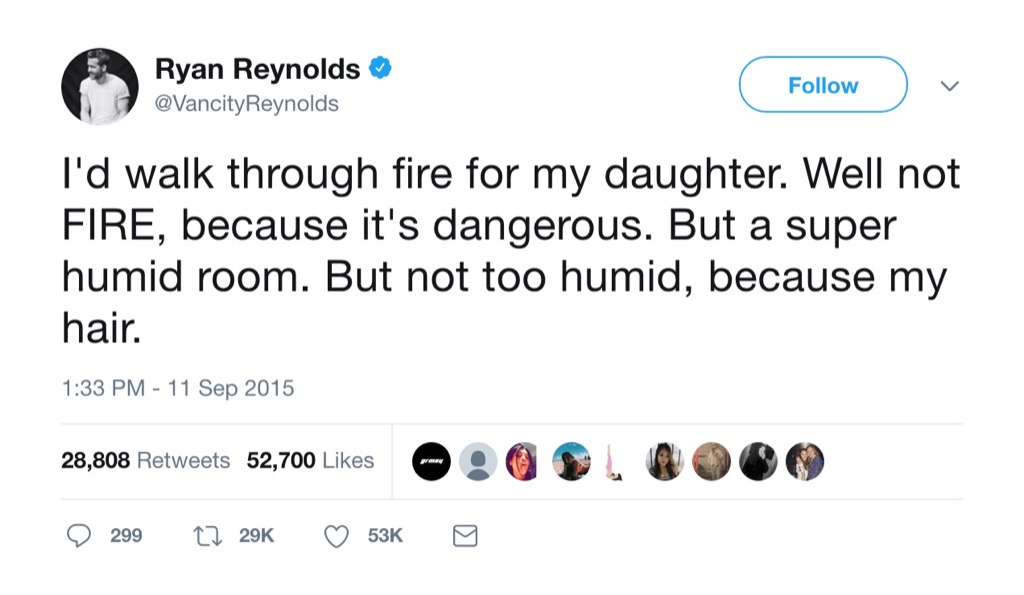 Just because you love someone unconditionally doesn't mean you need to look like an idiot while doing it, according to the actor. 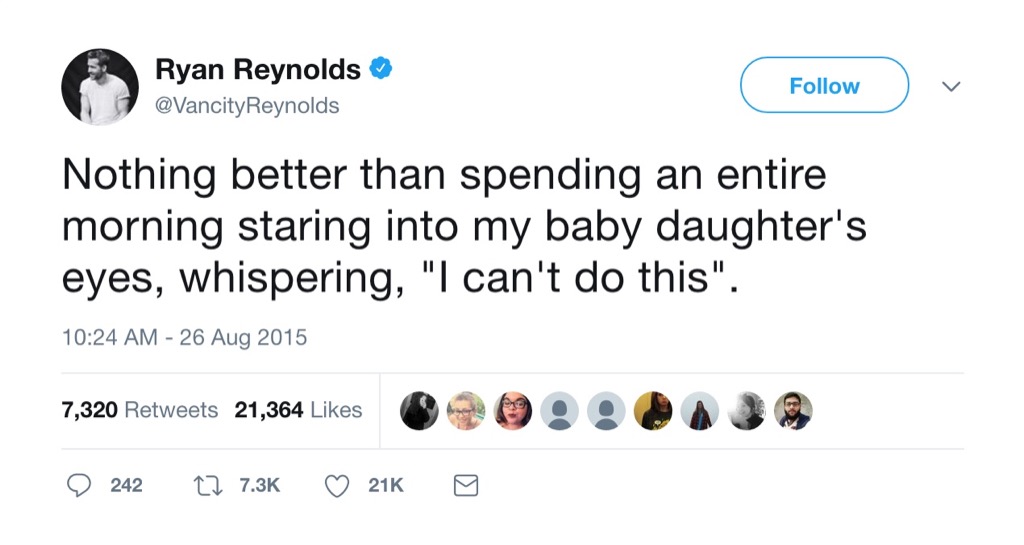 It's important for a child's development to have their parents talk to them, especially if it's going to be the last thing they hear before daddy leaves for good, as per this funny tweet. And when you want to take your own parenting game up a notch, start with the 20 Easy Ways to Be a (Much) Better Father.

Sarah Crow
Sarah Crow is a senior editor at Eat This, Not That!, where she focuses on celebrity news and health coverage. Read more
Filed Under
Funny
Read This Next
Latest News
Read This Next