Ever suffered from a bad case of "coddiwomple?" Read on.

Life is filled with minor annoyances. That's just part of being alive and on this planet; it's not always going to be fun. But you know what can be fun? The language we use to describe what's annoying us.

There are amazing words to describe just about anything that makes our days more difficult. Are you rushing to clean up your home before guests come over? That's called scurryfunging. Does your pet stare at you while you're eating, waiting patiently to see if you'll drop some food for him? That activity is called goraking. Feeling a vague sense of melancholy about the state of the world? You may be suffering from weltschmerz, a German word for the apathy caused by watching too much of the morning news.

And that's just the top of the iceberg. Here are 30 other words that do such a better job of explaining life's little difficulties. And for more comedically enlightening tidbits, read through the 40 Facts So Funny They're Hard to Believe.

Feeling a nervous fluttering in your stomach, enough that you want to stop whatever you're doing and run away.

EXAMPLE: "I almost asked her out. But then I got the collywobbles." And for more hilarious word play, check out the 50 Puns So Bad They're Actually Funny.

An old Yorkshire word for that weird clingy feeling when you're trying to break in a new pair of underwear. A "shive" is a loose thread in some clothing that won't stop rubbing you the wrong way.

EXAMPLE: "Sorry I can't sit still, but these new boxers are giving me the shivvies." 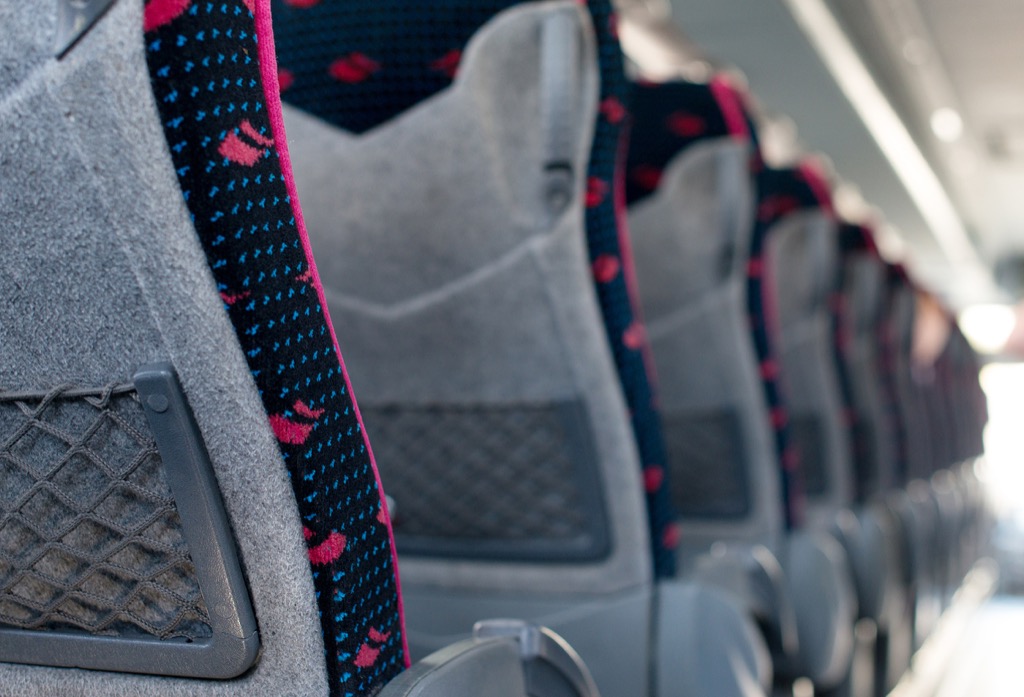 What happens to your body when you've been sitting in the same cramped, uncomfortable position for too long. It's kind of amazing how Scottish slang from the 18th century can perfectly describe the feeling of taking a nonstop flight from New York to LA.

EXAMPLE: "I was in the backseat for that whole road trip, with my knees up to my chin, and I still have the croochie-proochles." And for more on funny situations, here are the 20 Things Everyone Secretly Finds Hilarious.

Just read something that's painfully untrue? It's probably flapdoodle. It's like fake news, but fancier. Used since the mid-19th century, it's the less abusive way of saying, "You are full of it!"

EXAMPLE: "I wouldn't believe anything he tells you. All he does is read flapdoodle." 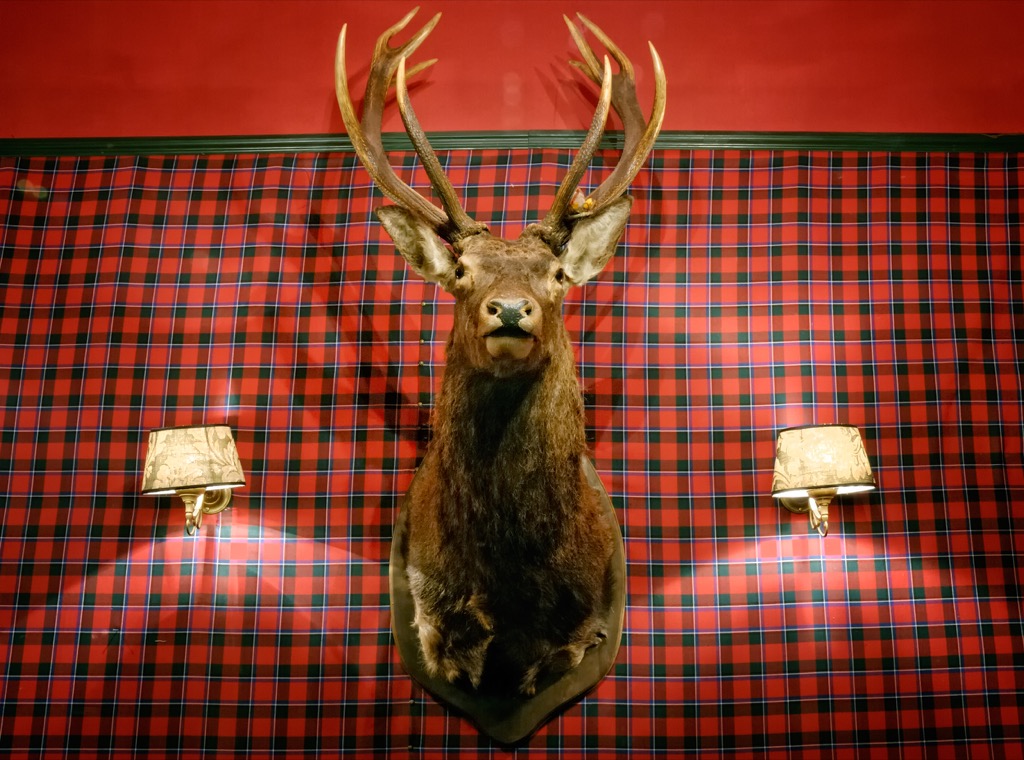 If you're the kind of person who decorates your home by covering every square inch of wall space with something—artwork, pictures of friends and family, a mirror—because it drives you crazy when there's any empty space at all, you're suffering from a condition called horror vacui.

EXAMPLE: "Maybe we don't cover that wall with a thousand paintings. I'm just saying, your horror vacui is starting to drive me batty." And for more home decor tips, these are the 30 Home Decorations No One Over 30 Should Own. 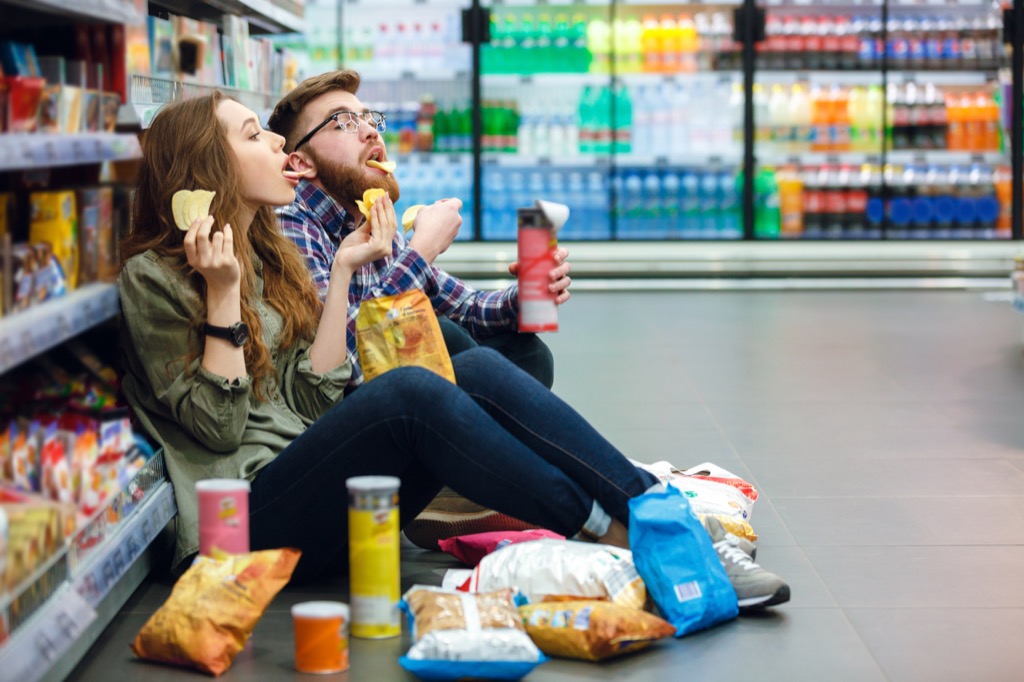 The bloated feeling you get after eating way too much or drinking to excess. It has its origins in the Greek word crapula, for a hangover caused by overindulgence.

EXAMPLE: "The last time I ate a whole plate of nachos by myself, I was feeling like crapulence for a week." And if you're fighting a hangover yourself, don't miss these 10 Best Science-Backed Hangover Cures.

A Yiddish word that first appeared in the U.S. during the early 20th century. It translated roughly as "I should worry?" It's not an actual question, but a flippant response. You're not concerned, despite whatever warnings you've been given.ae0fcc31ae342fd3a1346ebb1f342fcb

EXAMPLE: "Oh, he thinks I should get a lawyer, does he? Ishkabibble!"

Gorged a bit too heavily over the holidays? You may be experiencing yule hole. That's when you've reached the last hole on your belt buckle. We have the Scots to thank for this lovely reminder to go easy on the carbs in the New Year.

EXAMPLE: "I need to hit the gym. I overdid it during Christmas. I hit my yule hole." And if you're experiencing yule hole, here are the 10 Best Ways to Lose 10 Pounds Fast!

When you know you shouldn't be doing something but you do it anyway, you're being acrasia. Pronounced "uh-KRAY-zee-yuh", as in "You crazy, yah!" From a 19th-century Greek word meaning lack of strength or willpower.

EXAMPLE: "You're still smoking? You're acrasia!" And for more funny trivia, here are 75 Jokes So Bad They're Actually Funny. 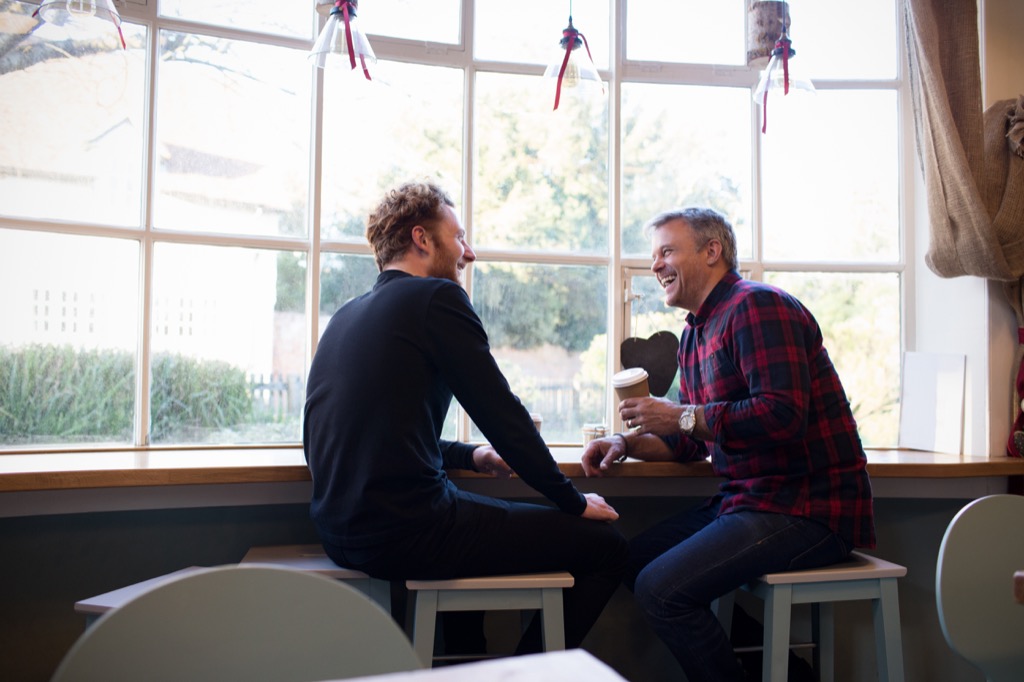 A naive or gullible person who is easily fooled. It's derived from the French word gober (to swallow) and mouche (fly). So basically, a gobemouche is "fly-swallower," somebody who'll accept just about anything.

EXAMPLE: "I have this friend on Facebook who's always posting stories about Bigfoot. He believes in it too. What a gobemouche!" 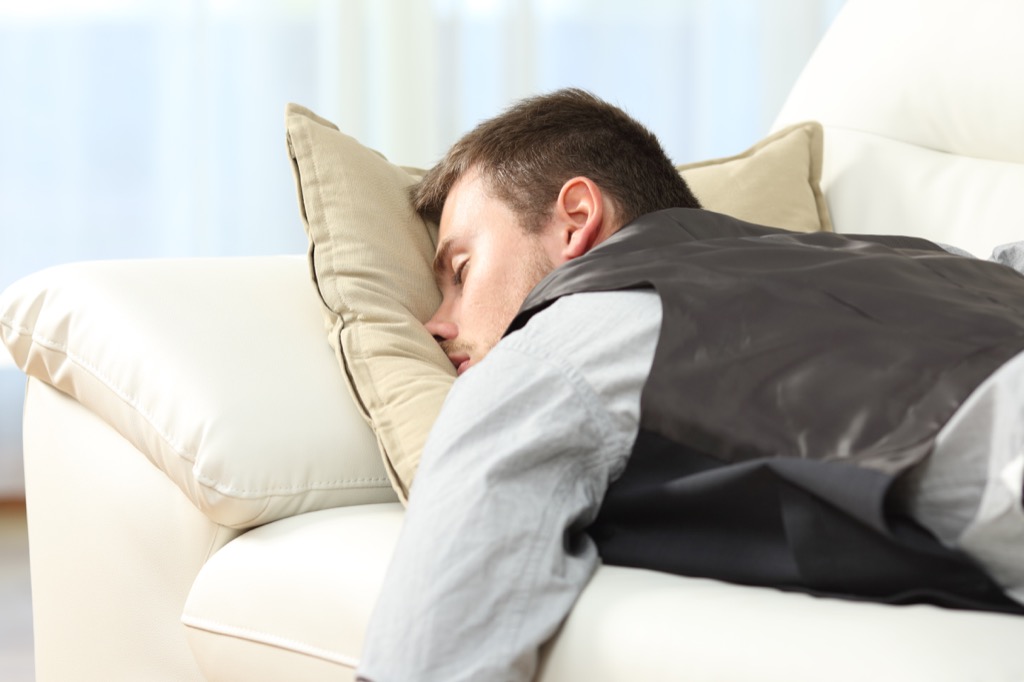 When you just can't summon the energy or enthusiasm to get to work. It originated in the 18th century to describe an imagined illness. You're not really sick, you just don't feel like showing up.

EXAMPLE: "I can't make it to our meeting today. I've got a bad case of humdudgeon." And if that sounds like you, check out these 30 Best Ways to Get More Energy Before Noon. 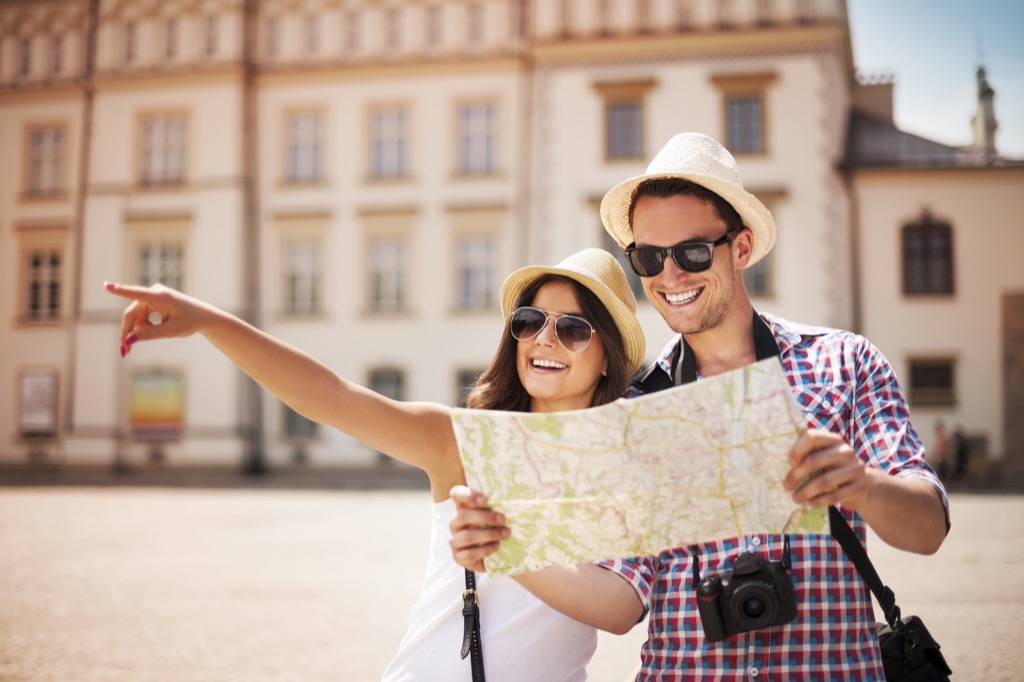 An old English word for not having any freaking idea where you're heading. If you've ever driven around on a weekend with no destination in mind, you've been out coddiwompling.

EXAMPLE: "I'm not in the mood to go anywhere. Let's just coddiwomple for awhile."

It sounds like it has something to do with a girl named Gwen, but this is actually a term for the tingling sensation, or "pins and needles," you can feel in your hands when they're numb from too much cold.

EXAMPLE: "I need to buy some gloves. I get the gwenders every time I try to throw a snowball with bare hands." 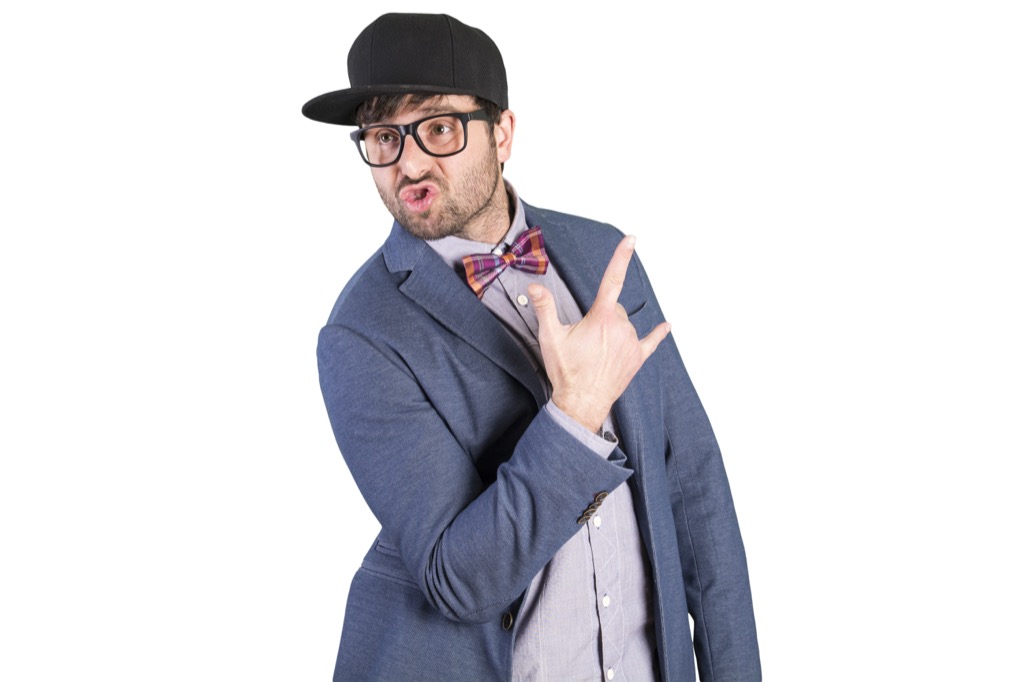 A less than intelligent person. Somebody prone to saying idiotic things. You're probably Facebook friends with a few of ninnyhammers.

EXAMPLE: "As politicians go, he's the biggest ninnyhammer of them all. And that's saying something!" 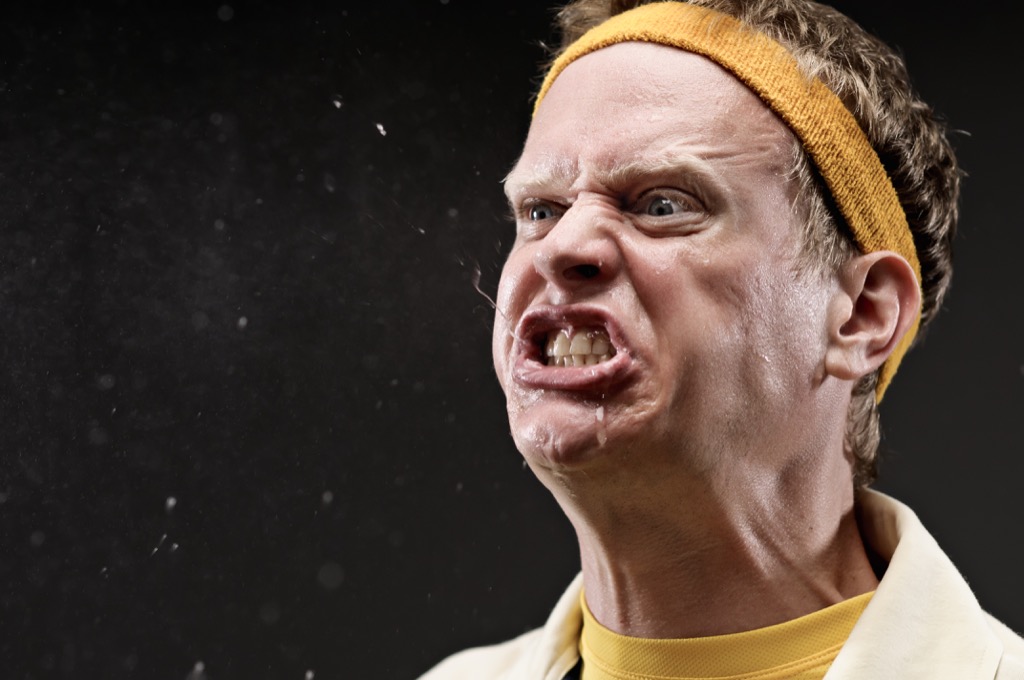 Originating from the ancient Greek words sialon ("saliva") and loqui ("speak"), it's when somebody can't speak without letting some spit fly.

EXAMPLE: "Hey, hey, hey, say it don't spray it. You're being sialoquent!" 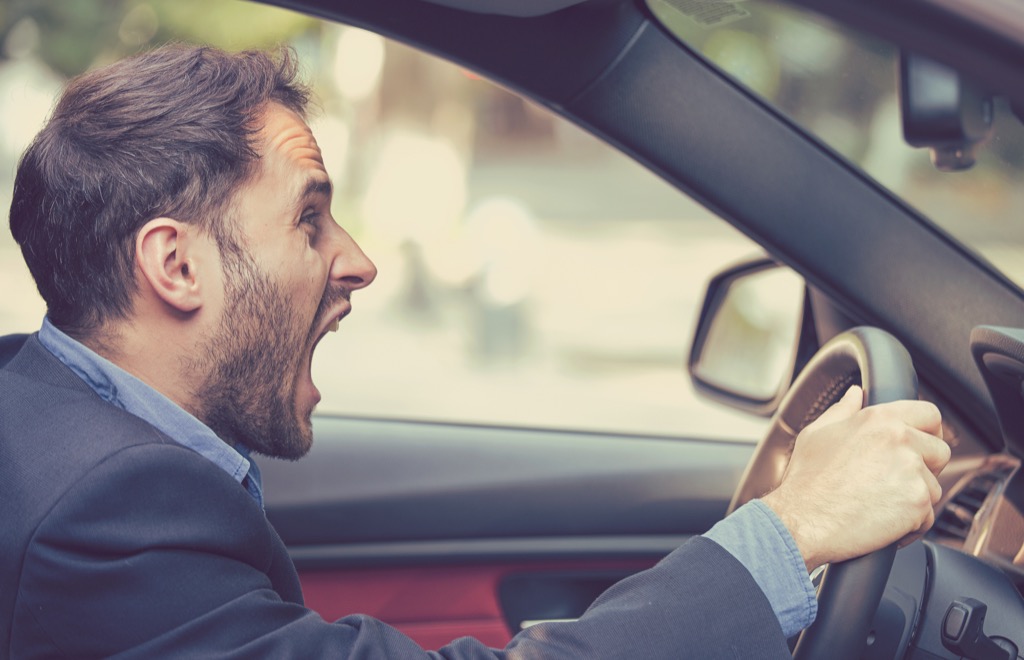 When you stub your foot or accidentally hit a finger while hammering a nail, your first impulse might be to curse. And that cursing bring a rush of relief. That emotional relief is called lalochezia.

EXAMPLE: "It hurt a little at first, but the lalochezia made it better." 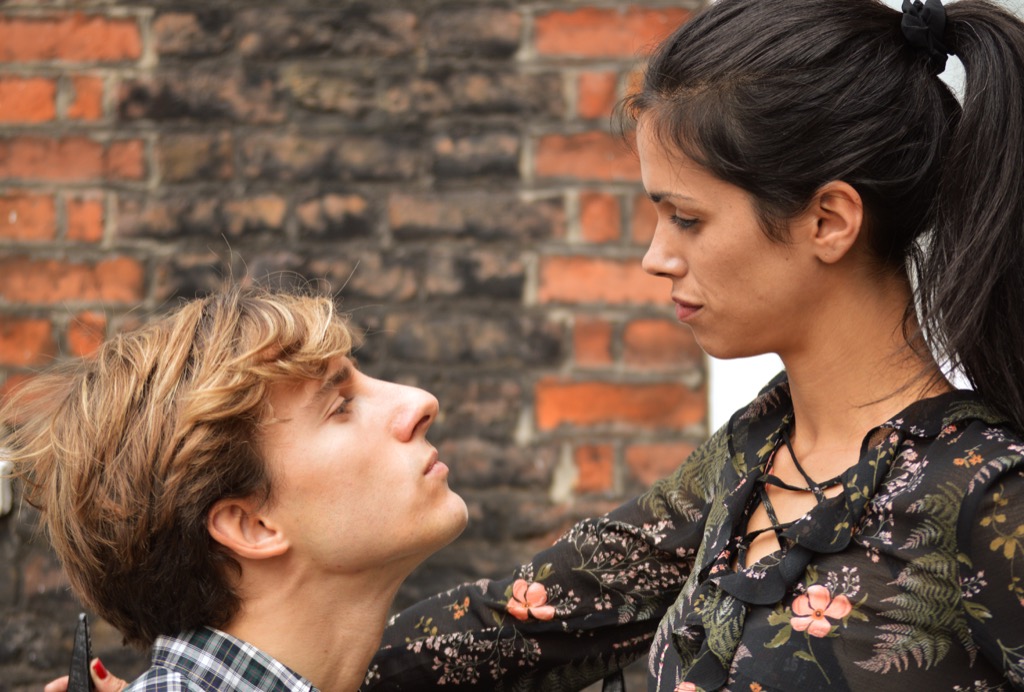 A tiny man who has grossly overestimated his importance or intelligence. It originated from the Dutch dialect kockeloeren, meaning "to crow like a rooster," because roosters apparently have a bloated sense of self-esteem.

EXAMPLE: "I just stop listening whenever that cockalorum starts bragging." 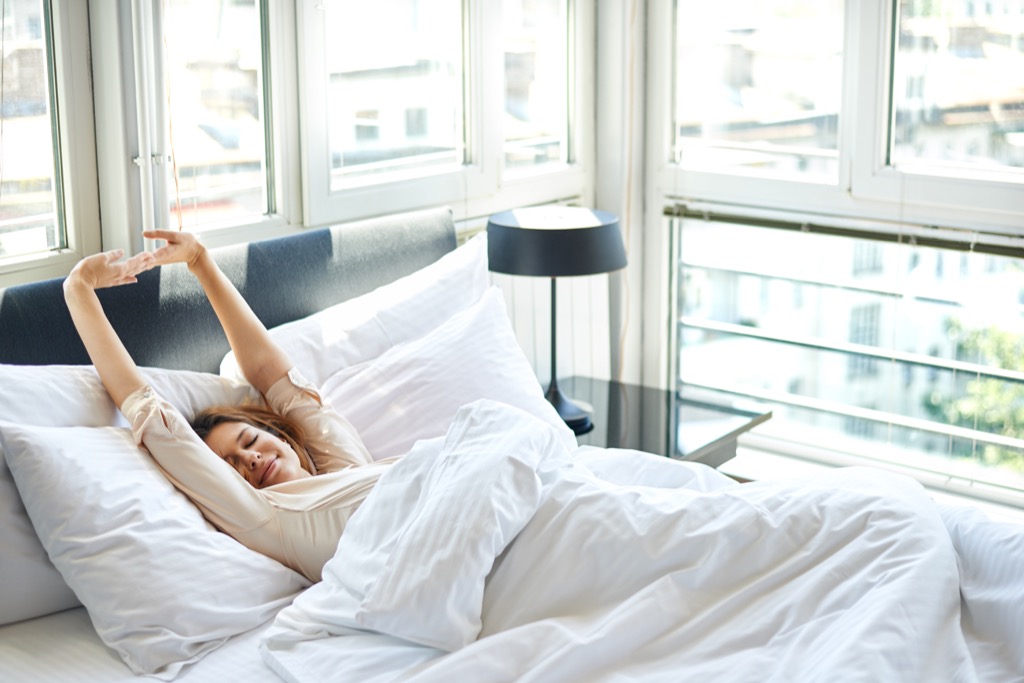 A word with Greek origins—clino for bed and mania for obsession—it's that uncontrollable feeling you get some mornings when you'd rather just stay in bed all day.

EXAMPLE: "I know I should go to the office. But it feels like a clinomania kind of day." 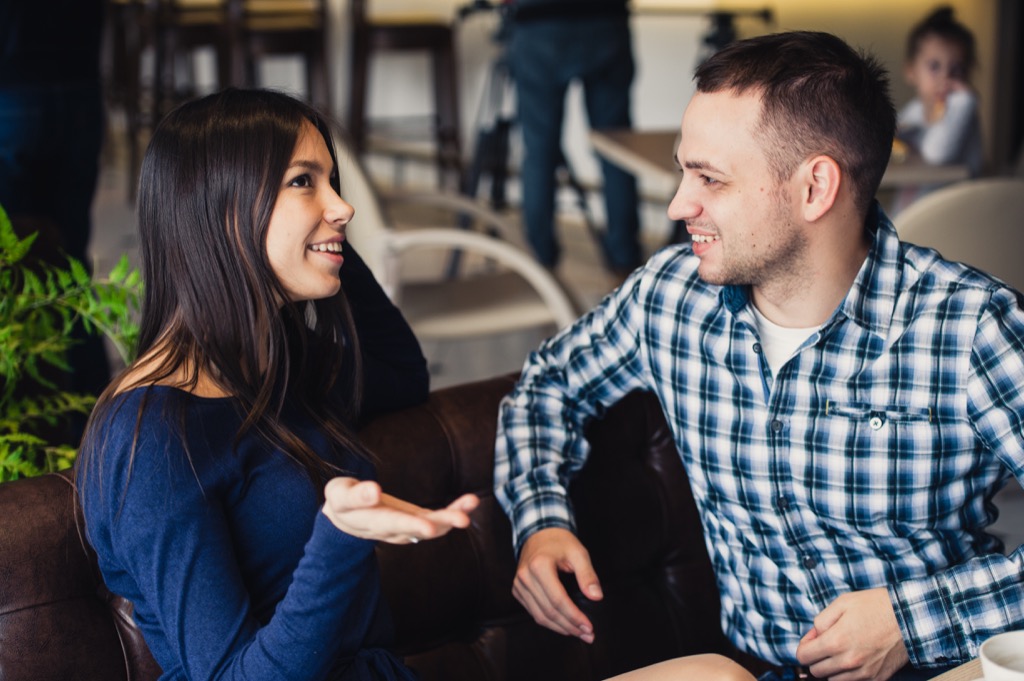 When you see someone so attractive that you can't take your eyes off of them, and you know that staring is creepy but you can't help yourself, you're smickering at them. This word has been around since at t least the 17th century, and possibly much earlier, and comes to us courtesy of Scotland.

EXAMPLE: "My girlfriend caught me smickering a girl, so now I'm in the doghouse."

When your stomach is rumbling, either from lack of food or too much digestion. It's derived from the Greek word borboryzein, which means "to rumble."

EXAMPLE: "I guess somebody's hungry. I can hear your gut borborygmus from here." And for more fun trivia, here are 20 Crazy Facts That Will Blow Your Mind. 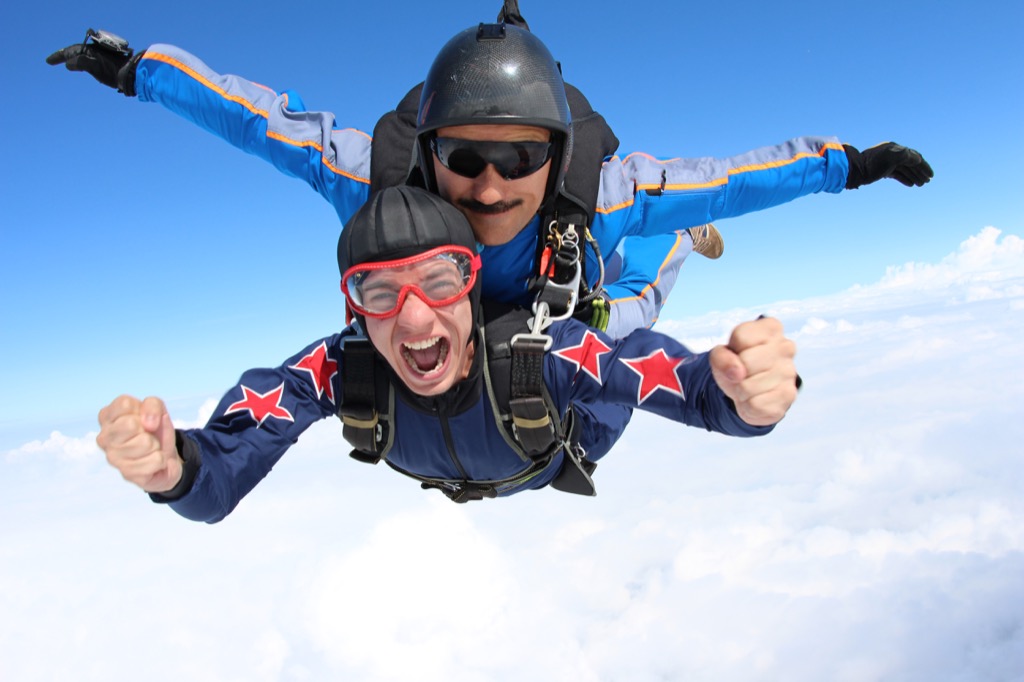 Being terrified, but in a pleasurable way. When you're at a scary movie and jump when a guy with an axe jumps does something horrible, or you're on a rollercoaster and the hairs on your arm stand at attention as you slowly click-click-clicks up the track, you're feeling the rush of frisson.

EXAMPLE: "I totally scared myself to death at Six Flags. I was feeling that frisson all day."

The rush of excitement when you realize your team is going to win. There's still time left on the clock, but there's no way they can blow it now.

EXAMPLE: "No way, man, it's over. Your boys are done! The game is over! Oh my gosh, I've got such crazy nikhedonia right now!" 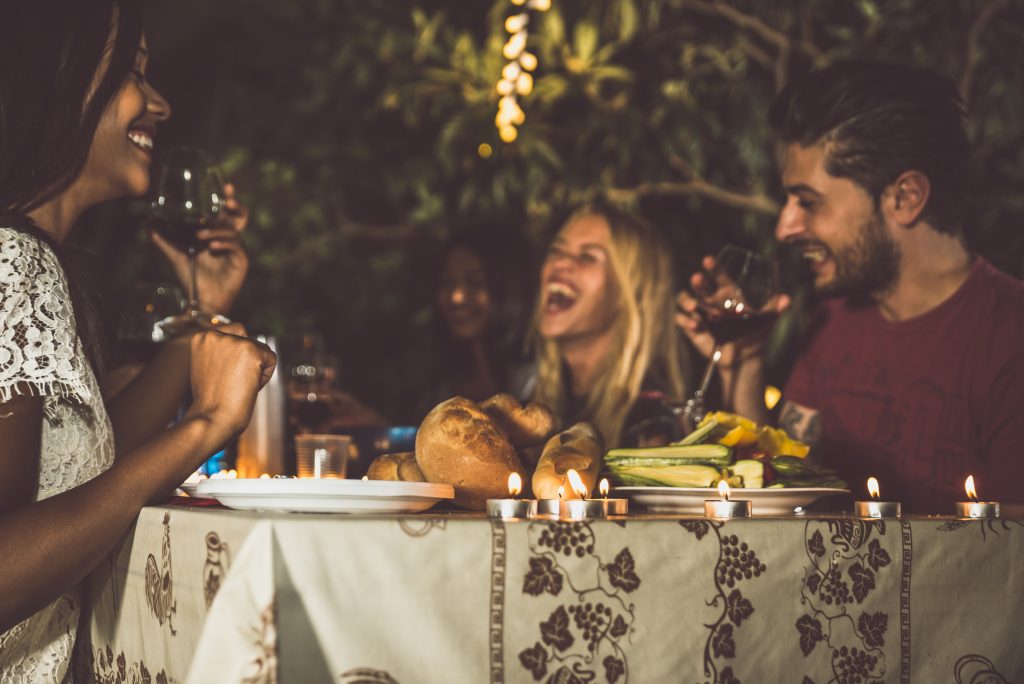 A cheap person. The guy who never picks up the bill or offers to pay for lunch this time. The word originates from 18th-century seafaring, given to a ship's purser who keeps more for himself than he gives to the rest of the ship's crew.

EXAMPLE: "We better split this three ways. Glenn is too much of a nipcheese to chip in."

It sure does look like you're working at your computer, but you're probably just playing solitaire on your computer.

EXAMPLE: "Of course he didn't meet his deadline. All he does all day is fudgel."

That bone-tired feeling after a long day of chores or busy-work. Unless you've been fudgelling at the computer all day, in which case you're a forswunke liar.

EXAMPLE: "I'm so tired, I can't lift a finger. I'm forswunke!" And if that sounds like you, here are 25 Non-Coffee Ways to Boost Your Energy Levels.

The scientific term for an ice cream headache. What, did you think that temporary pain in your thesphenopalatine ganglion wouldn't have a medical name?

EXAMPLE: "Ow, ow, ow! I ate that tutti frutti way too fast and now I've got a case of sphenopalatine ganglioneuralgia!!" 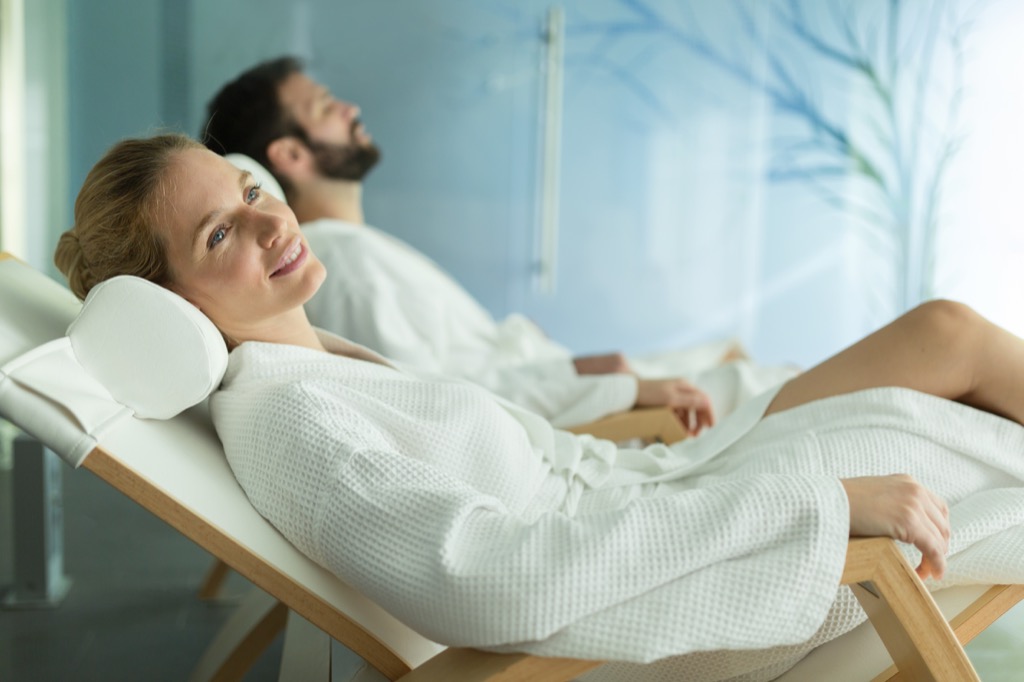 Not at all what you think it means. This Middle English word from the 13th century comes from "cover" (to conceal) and "slut" (an untidy woman.) It's the piece of clothing you wear to go outside when you don't feel like changing out of your shabby or unclean clothes.

EXAMPLE: "I'd love to go to breakfast, but I'd rather stay in pajamas. I'll just throw on this coverslut and nobody will notice." 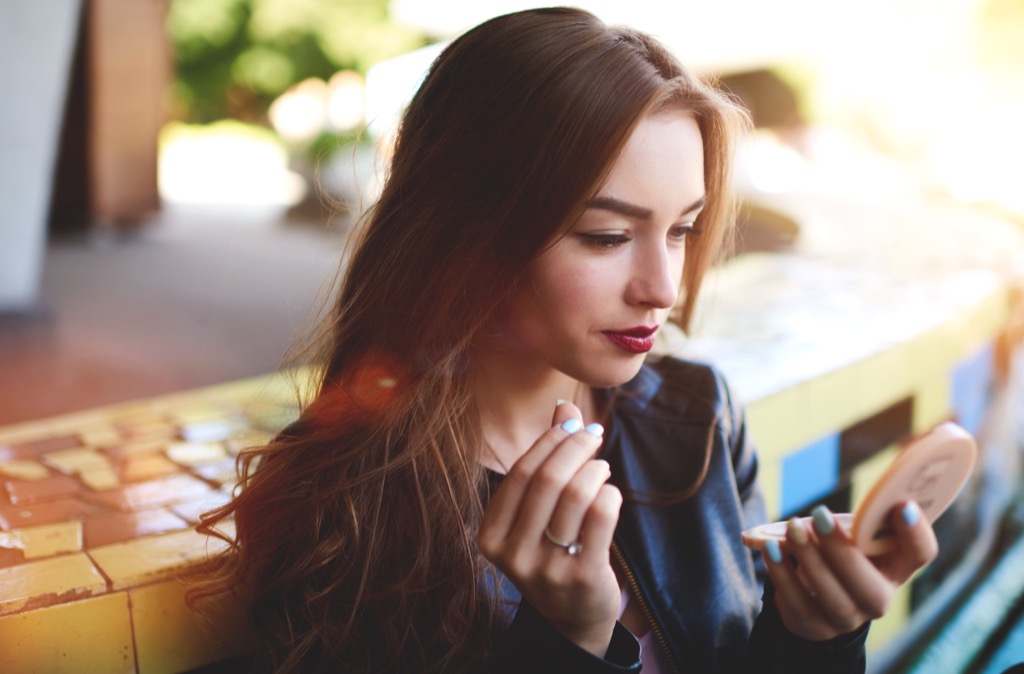 An old English word for putting on makeup. Don't say it too fast or they might think you're accusing them of something else.

EXAMPLE: "No, no, I say you're farding. Far-ding. As in putting on makeup. Why, what did you think I meant?"

If it's "beer-thirty," then it's officially quafftide time. It's a goofy word for indicating that happy hour is upon us and the time for drinking to excess had arrived. First used in a book from 1582 to describe the Roman festival Bacchanalia.

EXAMPLE: "Sure, let's get another round. It's quafftide " 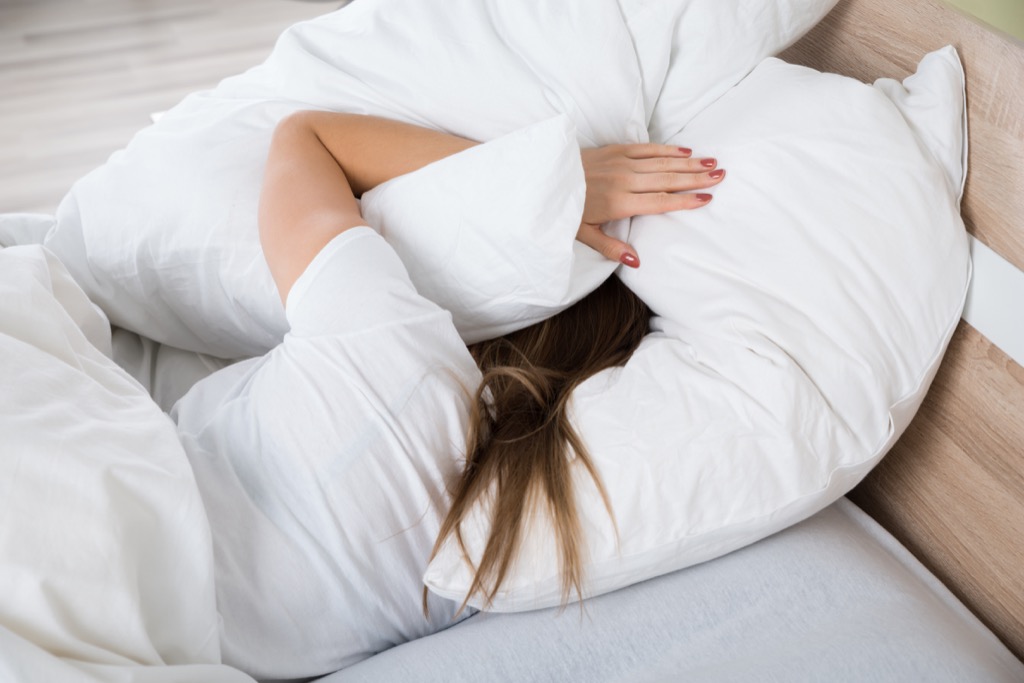 It's Sunday and you really, really don't want to go to work tomorrow. That heavy, sad feeling that all fun things will be ending soon is called sonntagsleerung, This word originated in Germany, which makes perfect sense. Who better to create a word for having a vague sense of dread about tomorrow?

EXAMPLE: "Ugh, is it Sunday already? No wonder I feel so much sonntagsleerung."