Celebs shell out enormous amounts of money to trainers, stylists, nutritionists, and makeup artists to maintain a particular look that lands them magazine covers and the admiration of fans. Unfortunately, there's one medium their look doesn't always translate so well to: the wax figure.

While wax sculptures of royals and other notable figures have been carved for hundreds of years, Madame Tussauds was the first to popularize the art form, with the museum's first permanent collection opening in London in 1835. However, despite wax sculpture being an art form honed over generations, many celebrity wax figures are so strange-looking, so creepy, and so unrecognizable that they're pretty shocking. We've compiled the 30 worst Madam Tussauds celebrity wax figures of all time, each a little weirder than the last. And for more bizarre art, check out The Ugliest Statue in Every State! 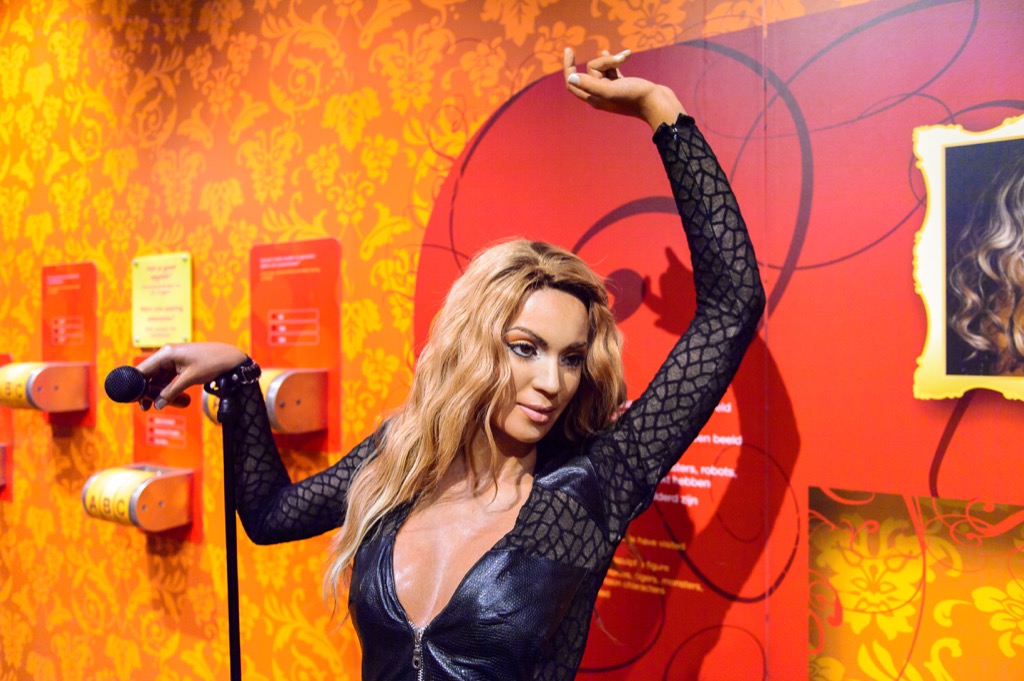 Despite being one of the world's most recognizable women, this statue of Beyoncé at the Madame Tussauds in Amsterdam might as well be a stranger. Not only does the statue have considerably lighter coloring than Queen Bey, the strange outfit, extremely shiny boobs, and thousand-yard stare make this one of the worst wax figures we've ever seen. The illuminati will definitely be hearing about this. Bey and Jay may have had their ups and downs, but they're wiser for it—discover what they had to say in our roundup of the 30 Best Celebrity Relationship Quotes! 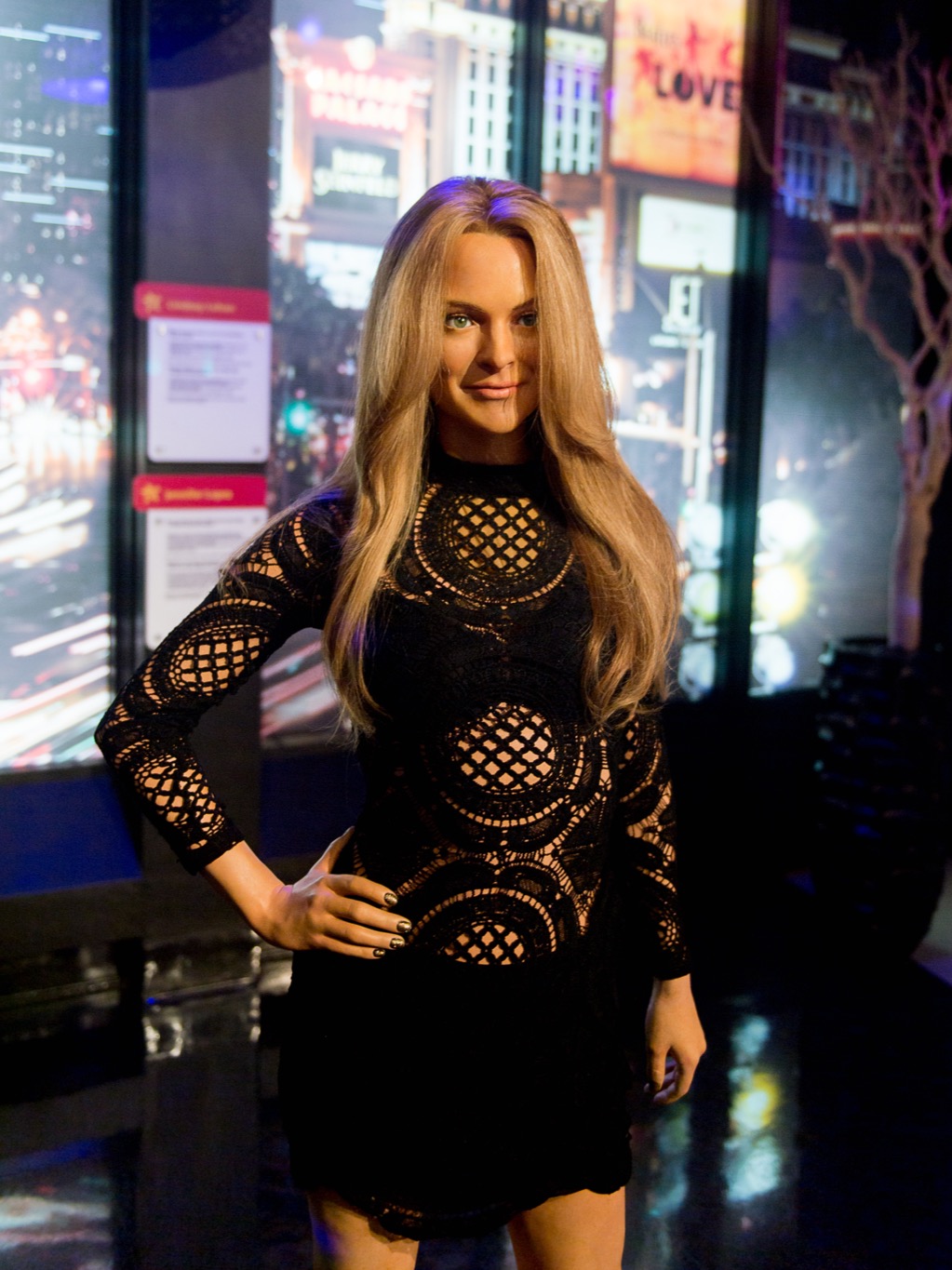 She doesn't even go here! Without red hair, freckles, and a cigarette in hand, Lindsay Lohan is virtually unrecognizable as it is. When you give her a forehead you could put a billboard on, she looks stranger yet. And for more fun celeb news, check out the Winona Ryder Shampoo Commercial Everyone's Talking About. 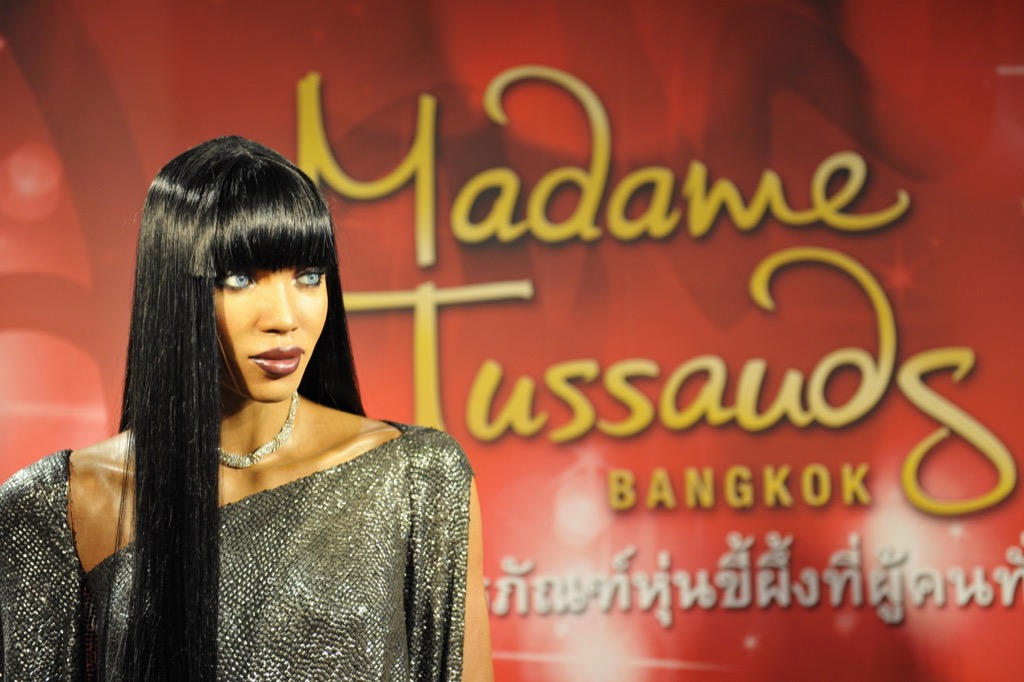 This statue of Naomi Campbell at Madame Tussauds Bangkok gets so many things wrong. In addition to completely misjudging the proportions of the supermodel's face, the artist also lightened her skin and traded Campbell's hazel eyes for bright blue ones. 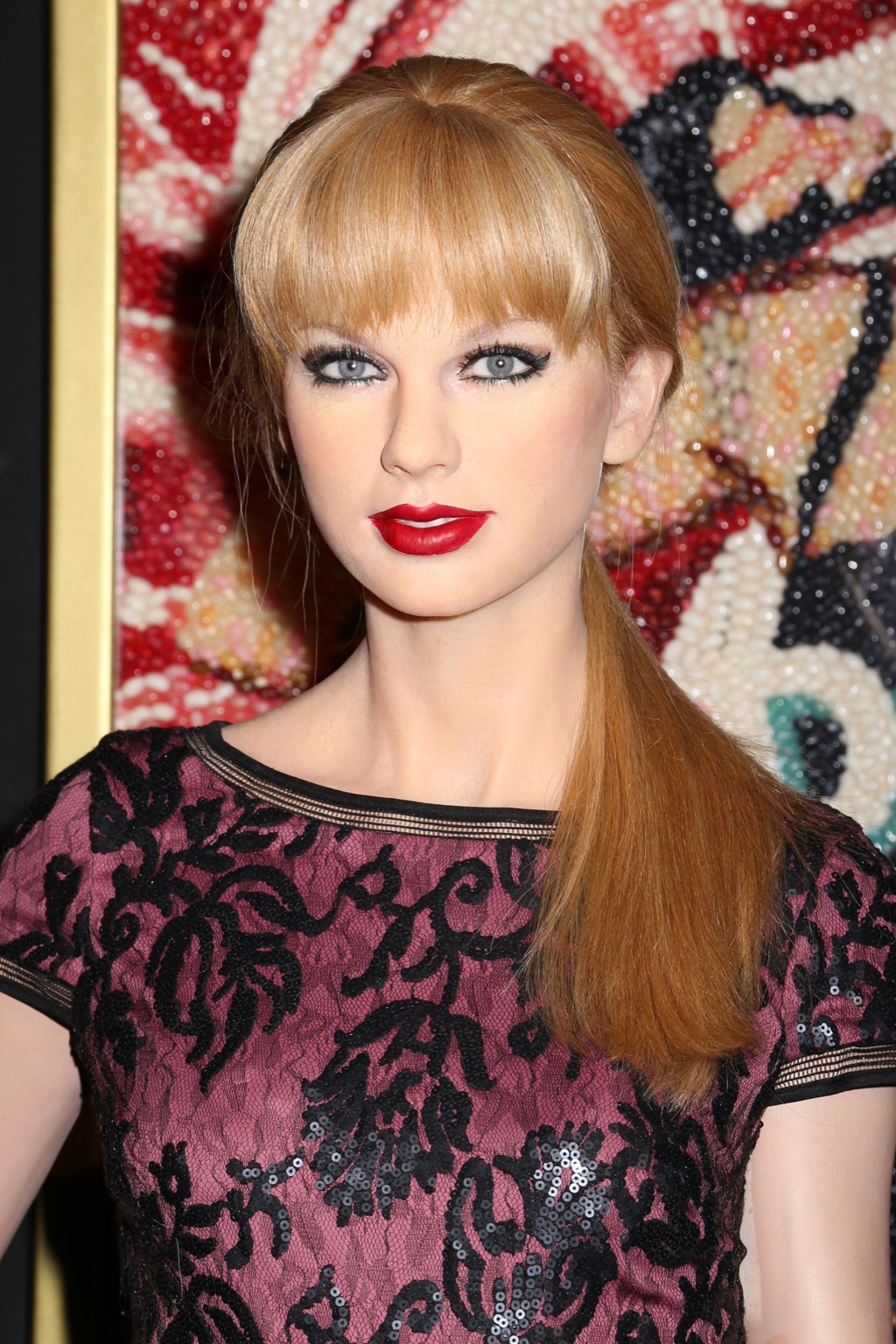 While they definitely got her trademark red lipstick, this statue of Taylor Swift at Madame Tussauds in New York, with its silver eye shadow and wispy bangs, looks more like an anonymous high schooler than the pop star. And for more on Tay Tay, read up on why Every Man on Earth Not-So-Secretly Loves Taylor Swift. 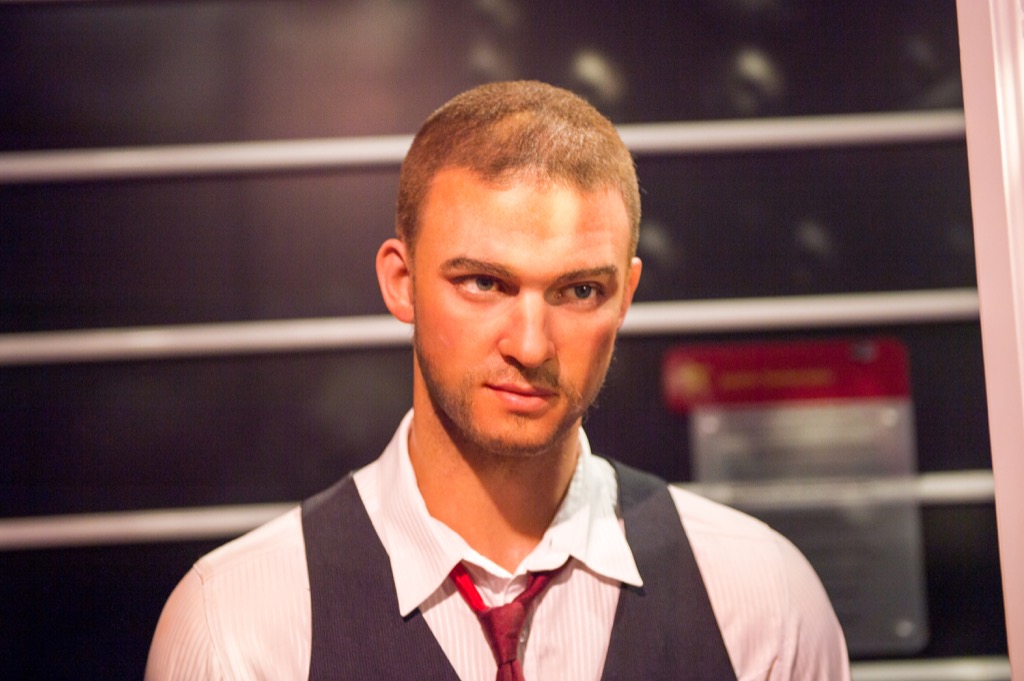 We can't stop the feeling that Justin Timberlake wouldn't love this balding, sparsely-bearded, leering version of himself at Madame Tussauds in Amsterdam. 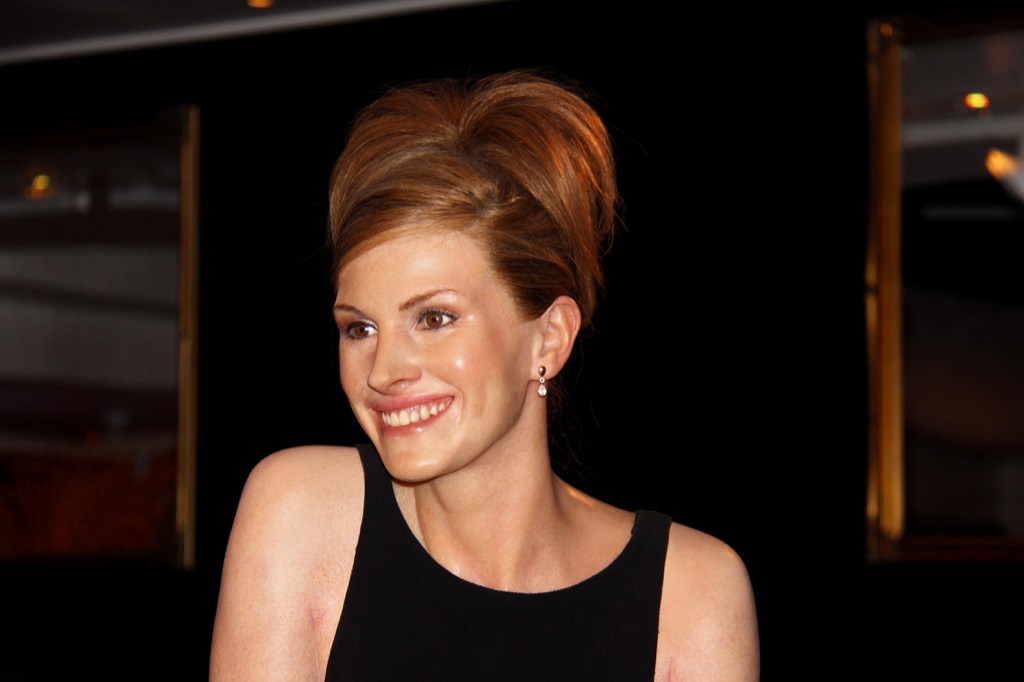 Julia Roberts' strong features are part of what make the actress such an icon. However, just add a few millimeters to any of her facial measurements and you get this scary-looking lady and her toothy grimace. 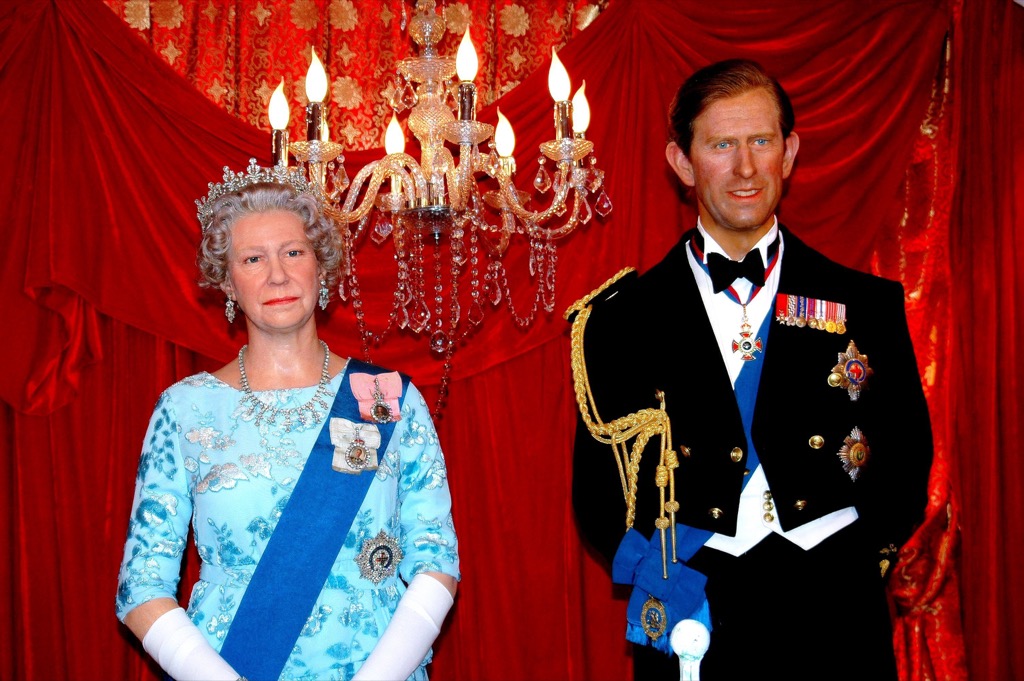 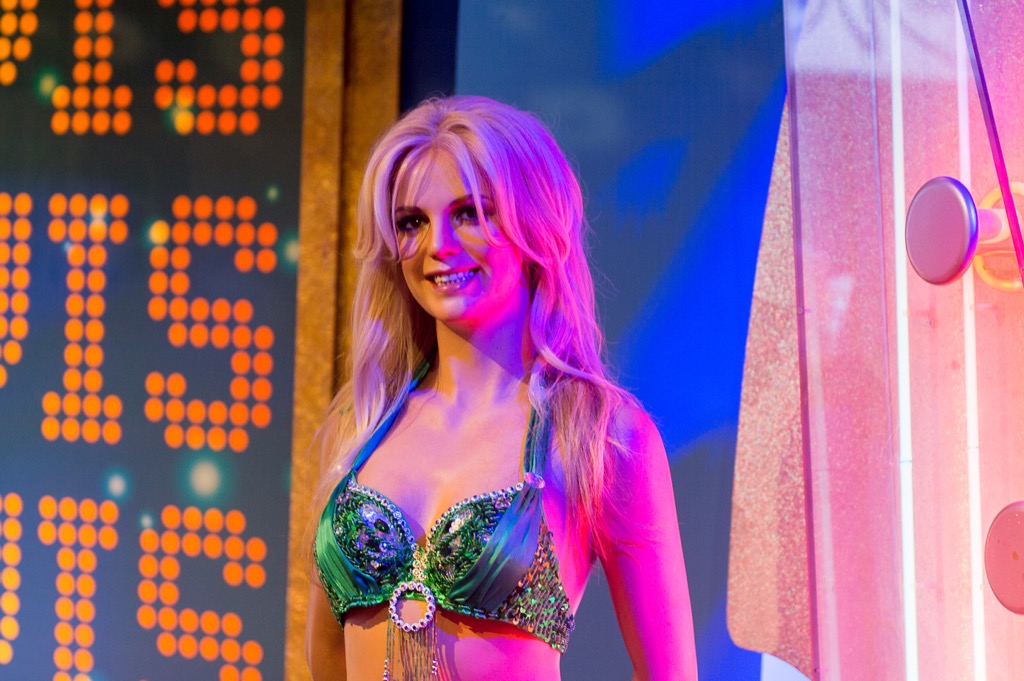 Considering that Britney Spears just finished a long-term Vegas residency, it seems that the city's Madame Tussauds could have at least tried to make a wax figure that looked remotely like her. 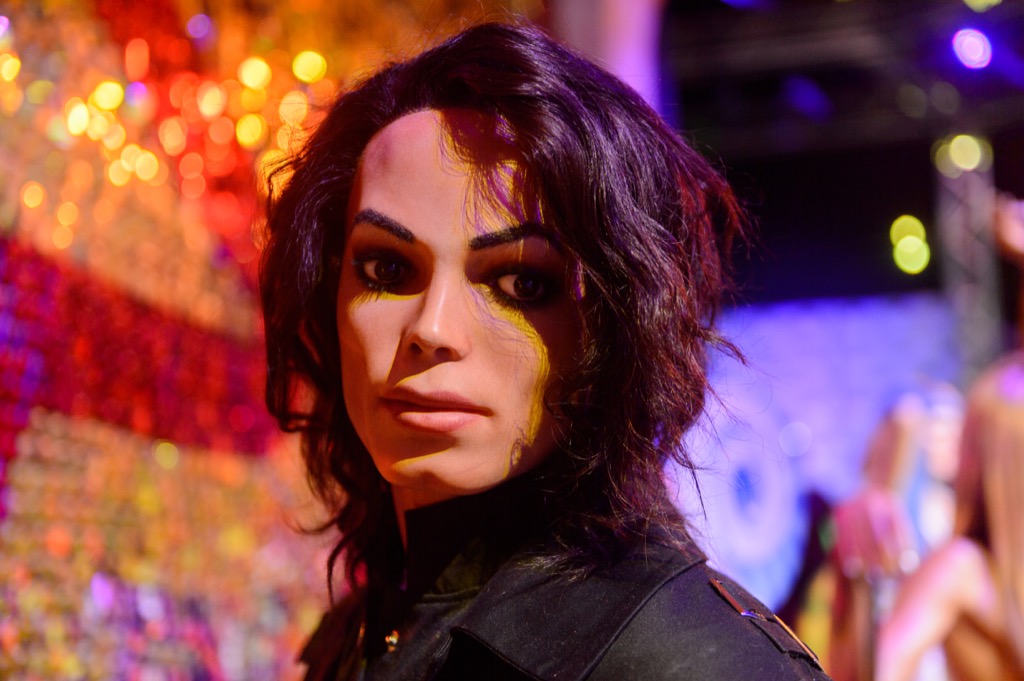 Michael Jackson's penchant for plastic surgery may have made his look difficult to pin down, but this looks more like a female mannequin in drag than the King of Pop. 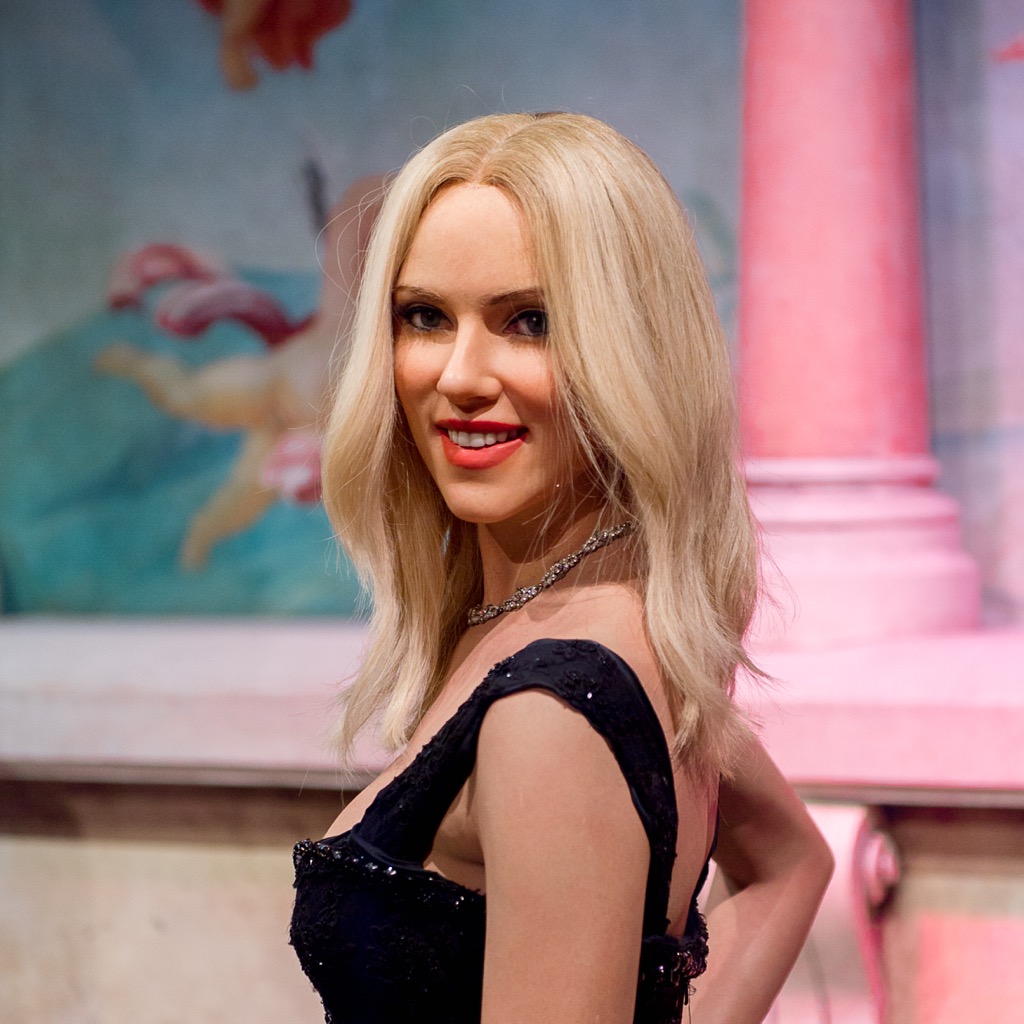 "Make her lips thinner, her forehead three inches taller, and while you're at it, make it look like she doesn't know how to pluck her eyebrows"—the artist behind this bizarre Scarlett Johansson wax figure, apparently. 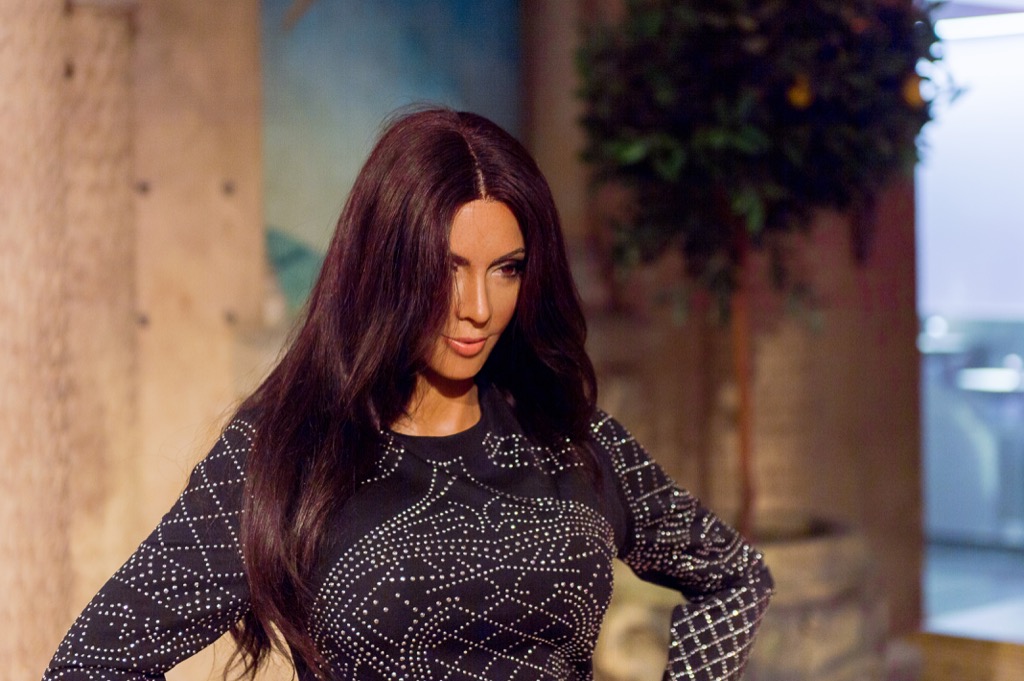 Considering that the woman has published an entire book of selfies, it seems like the artist making Kim Kardashian's wax figure must have gone out of their way to make this look so unlike the Keeping Up with the Kardashians star. 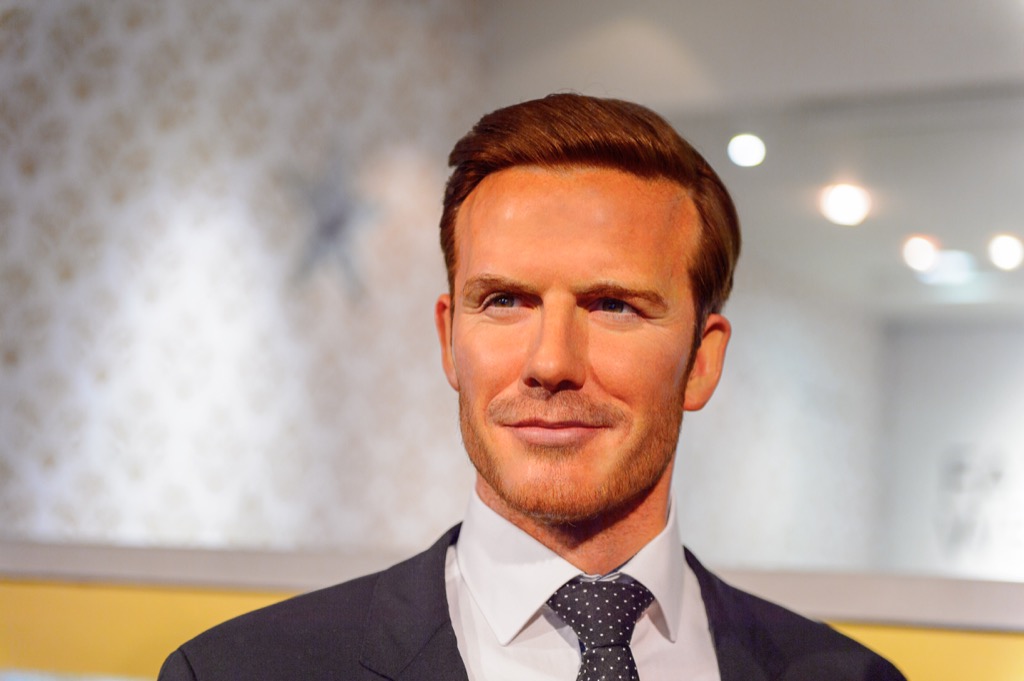 Patchy beard? Check. Shockingly long neck? Check. Eight-foot forehead? Check. Resemblance to David Beckham? Not so much. And when you want to know what your own features might suggest, discover the 13 Astonishing Things Your Face Shape Says About You! 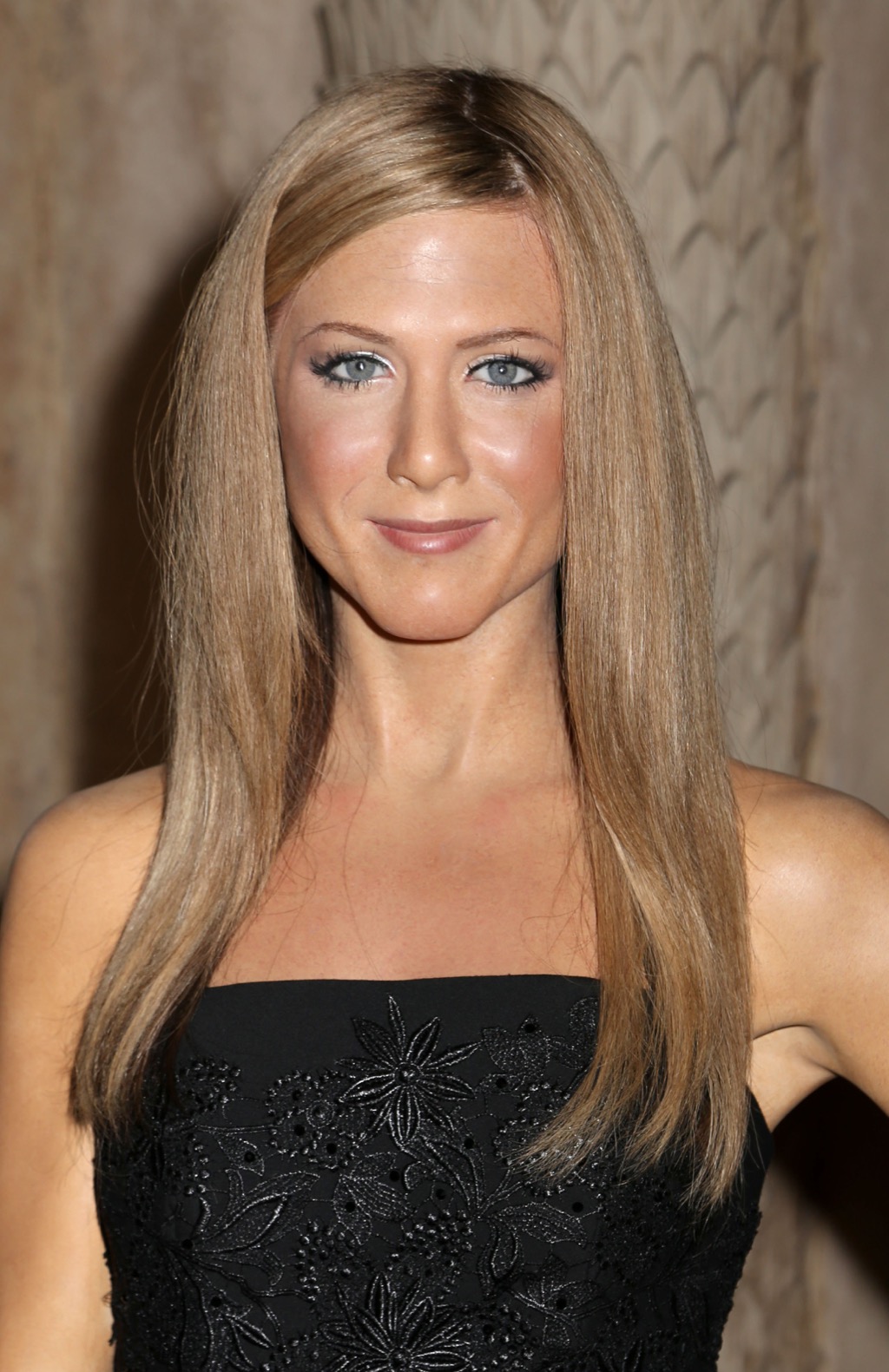 She'll be there for you when the rain starts to pour, whoever the hell she is. Luckily, Jennifer Aniston's Friends cast mate has had a better second act: just discover why one reporter says that Men Can Learn a Lot From the Way David Schwimmer Respects Women. 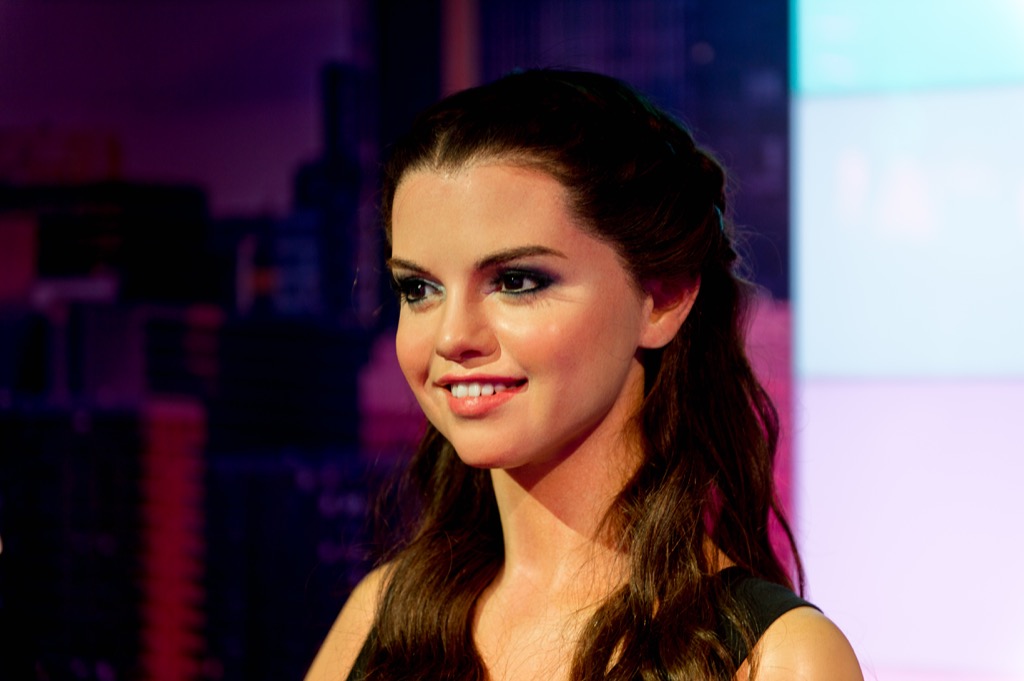 Thin lips, buck teeth, and a fivehead make one thing clear: Selena Gomez should never have crossed Taylor Swift, who clearly pulls a lot of weight in the wax world. 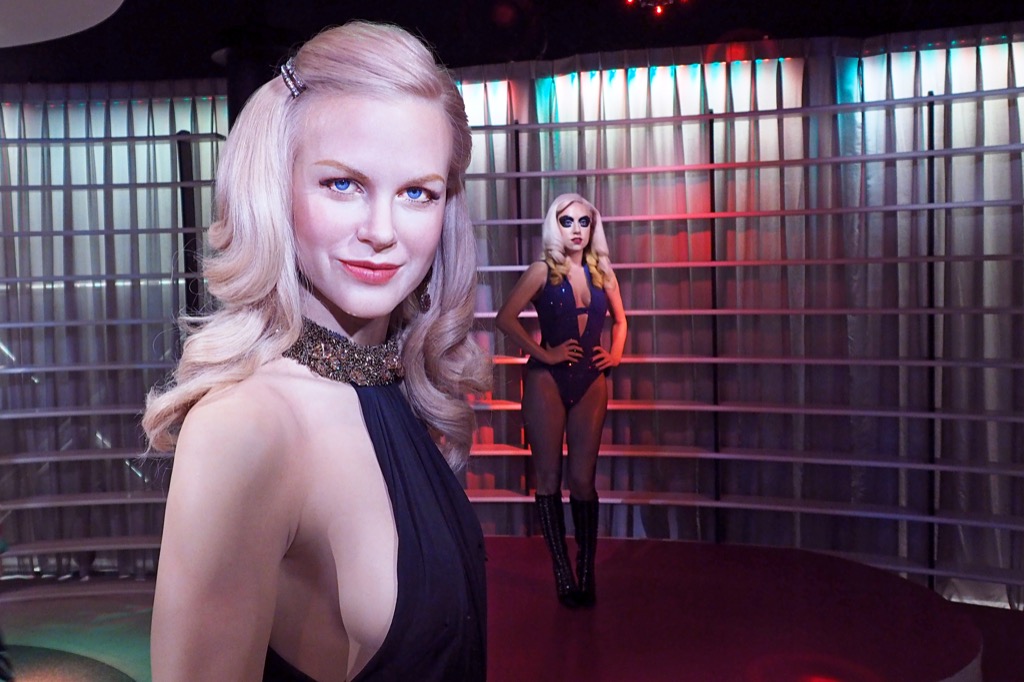 It's a tragedy nobody had one of those Eyes Wide Shut masks to stick on this horrifying Bangkok wax figure of Nicole Kidman, who's peering into your soul as we speak. 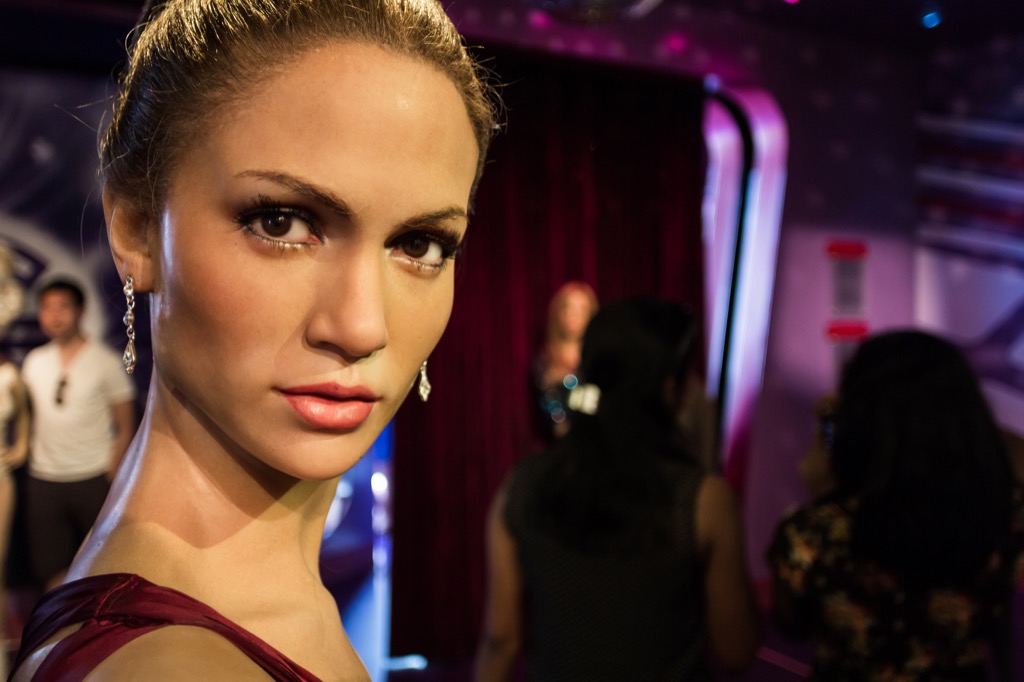 Meet Jenny From the Block, or, as we call this Jennifer Lopez wax figure, "Terrifying giraffe-neck girl from our nightmares." 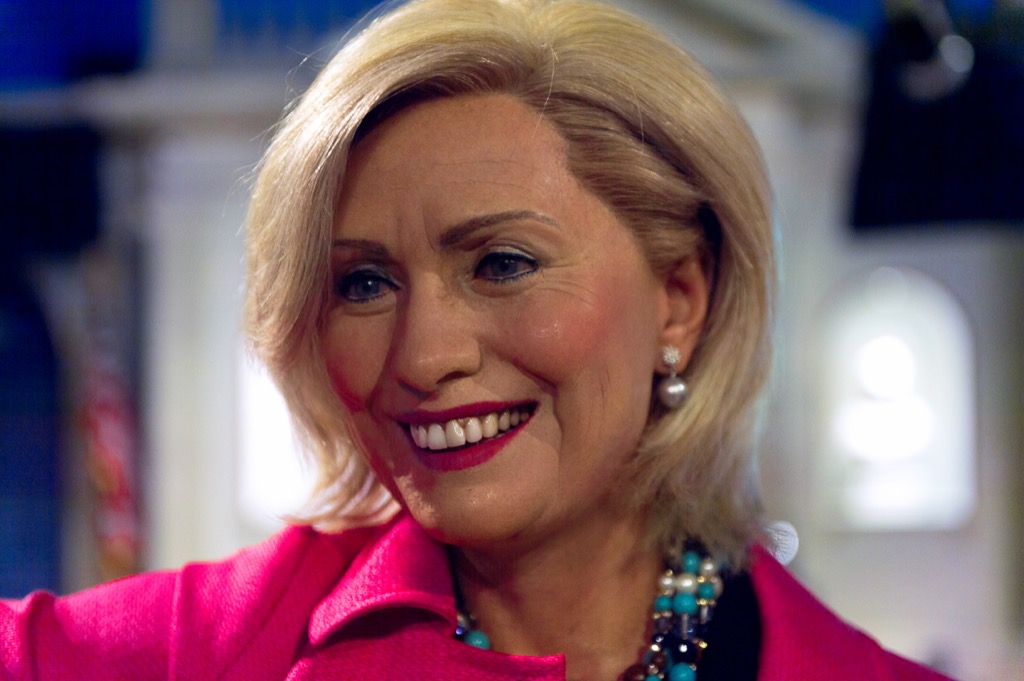 I'm with her? Not if it's this toothy terror you're talking about. 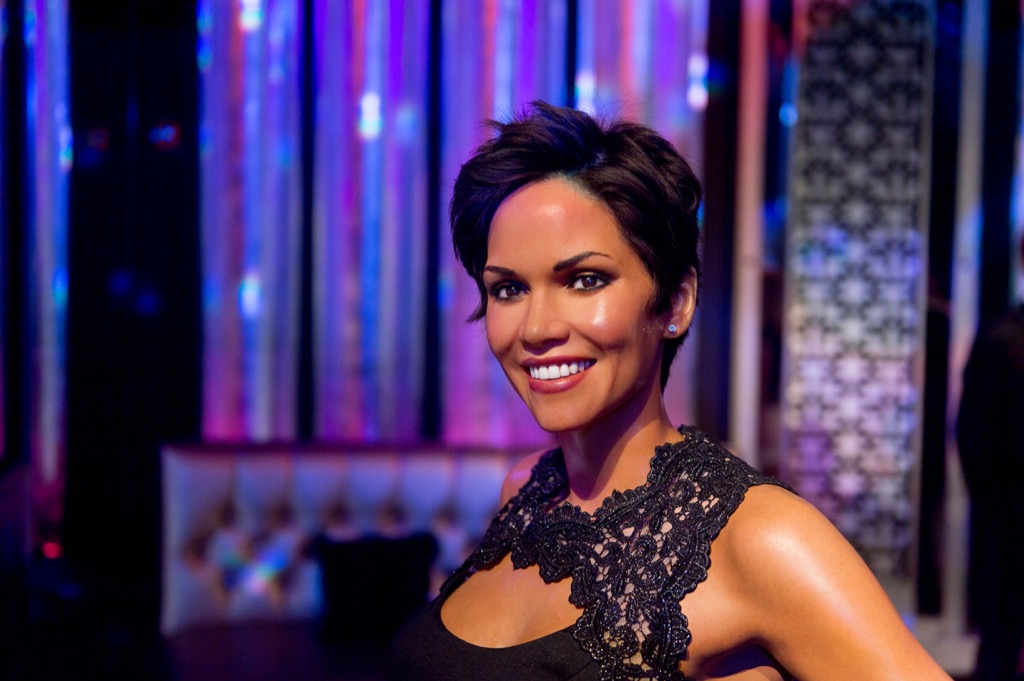 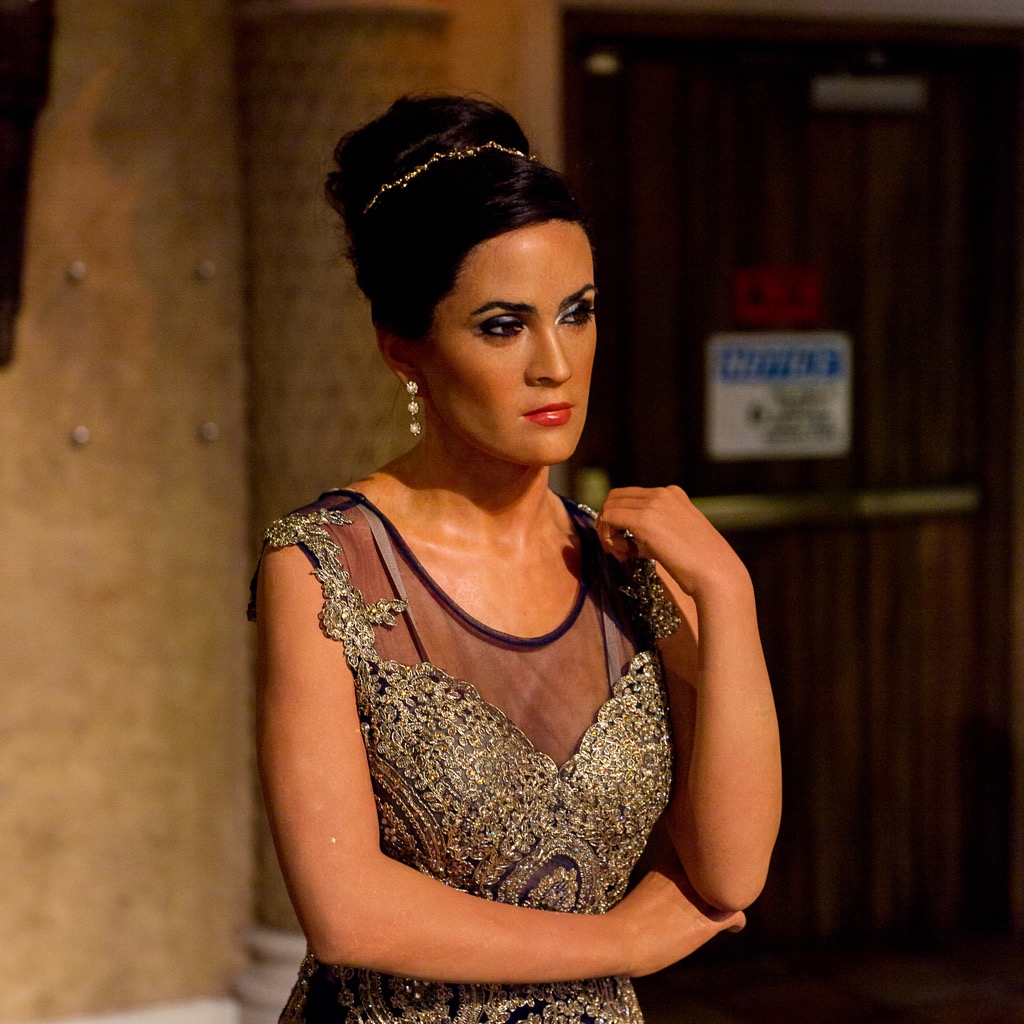 We're told this is supposed to be a wax figure of Salma Hayek. That must be a more common name than we thought. 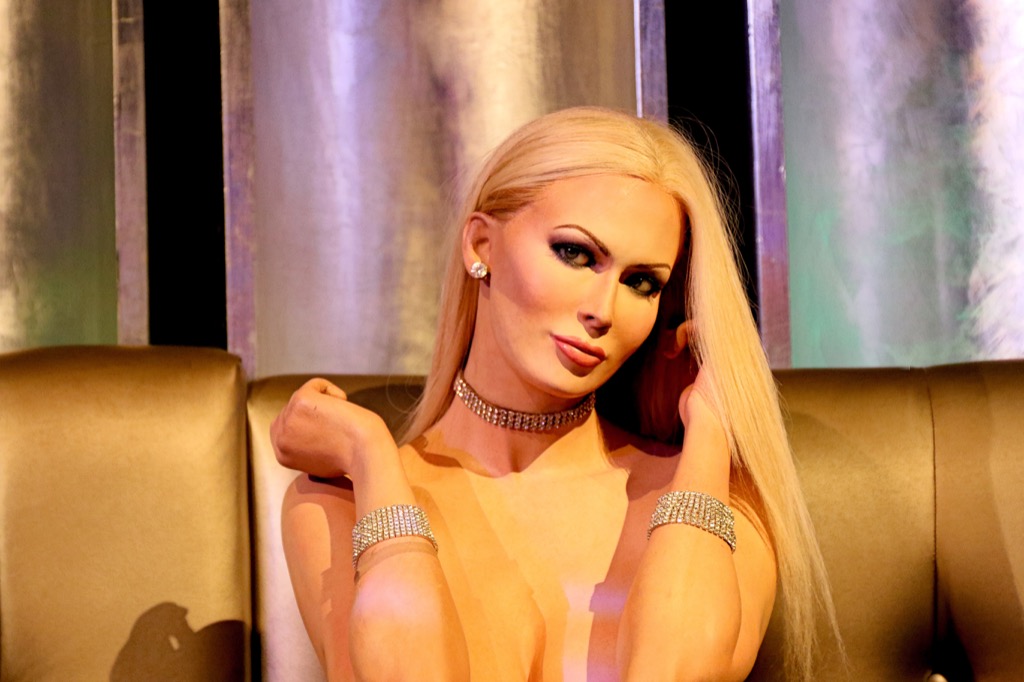 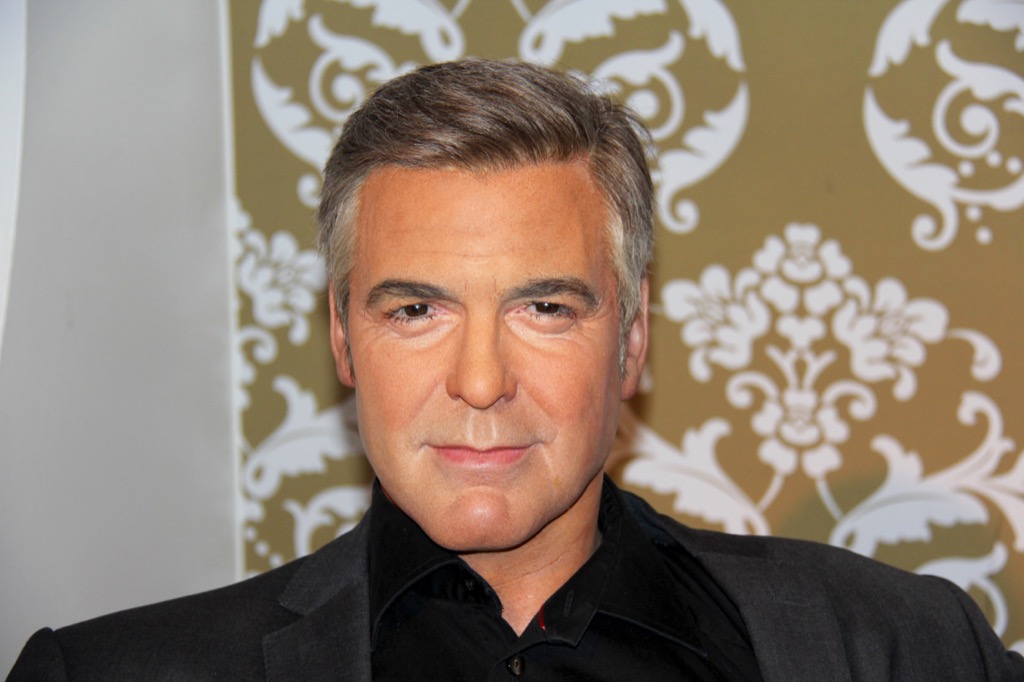 The stress of parenthood can take a toll on anyone's looks. It doesn't usually give them a face transplant, like this wax figure of George Clooney, though. If you're a dad (or are expecting), make sure you know the 20 Easy Ways to Be a (Much) Better Father!ae0fcc31ae342fd3a1346ebb1f342fcb 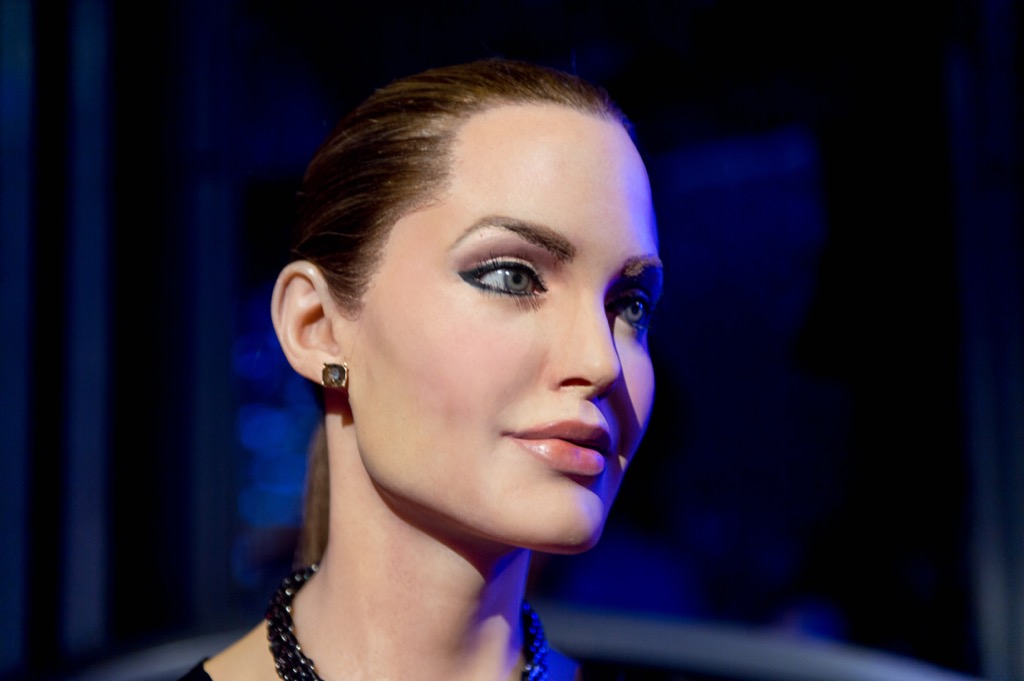 Make Angelina Jolie's nose sharper, her lips smaller, and tack on a smaller jaw and you get this average-looking lady posing as Angie at Madame Tussauds in Las Vegas. 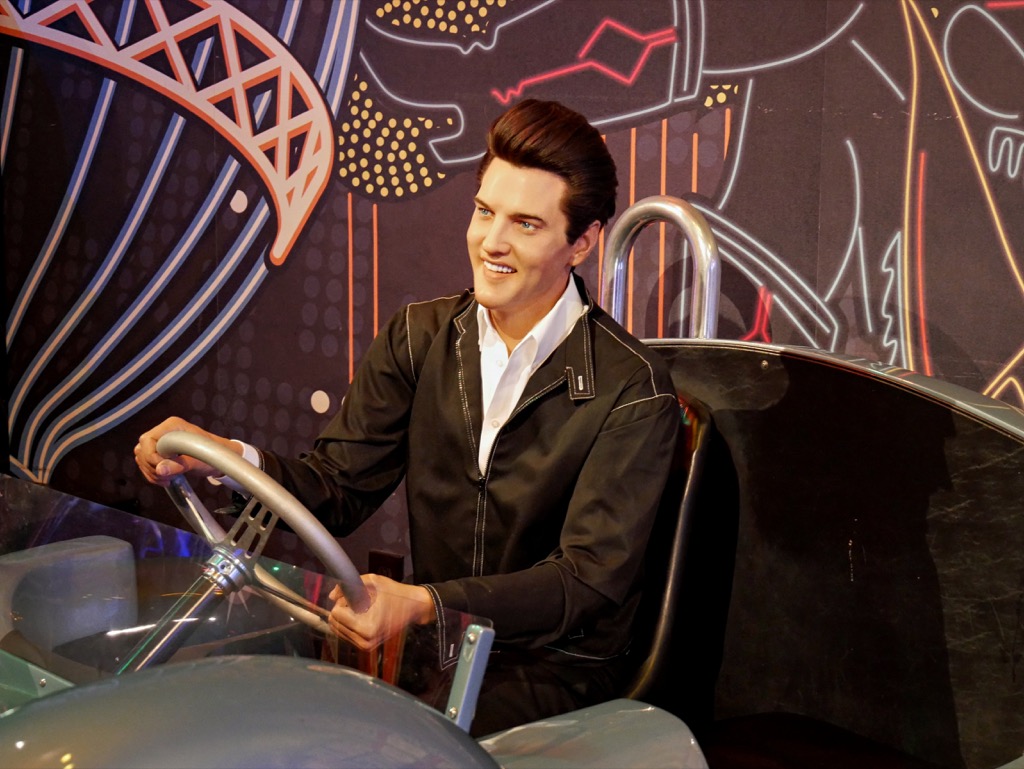 If he were alive today, we bet The King wouldn't be too pleased about this wax figure, which makes Elvis look like the love child of KD Lang and Chris Isaac. 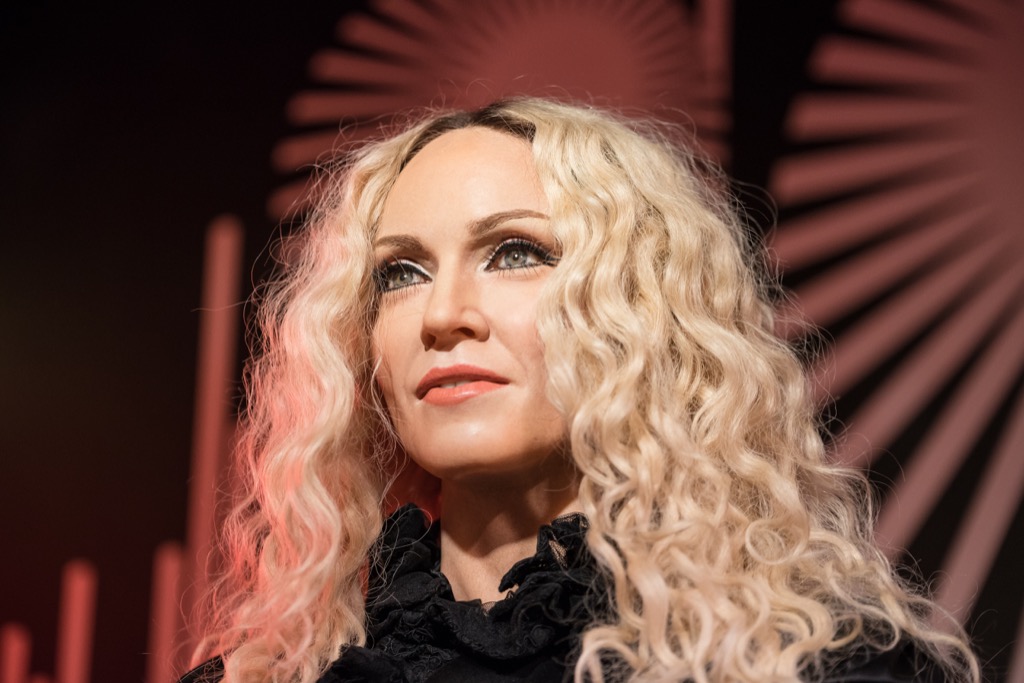 Soften the Material Girl's features and push her wig back and you get this bizarre Madonnabe in Bangkok. 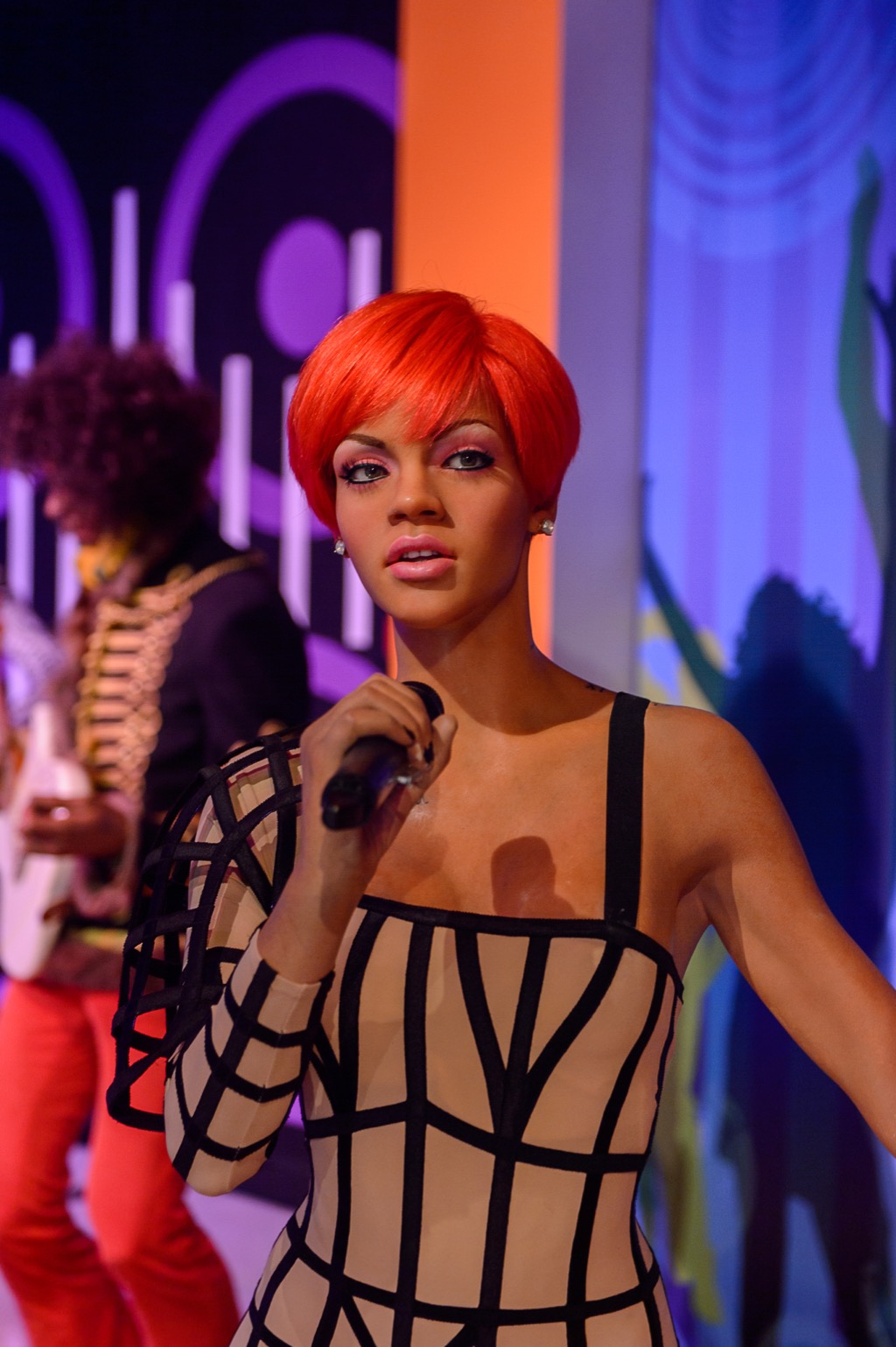 "I may be bad, but I'm perfectly good at it"—whoever created this Rihanna replica at Madame Tussauds in las Vegas. We get why Madame Tussauds in Bangkok dressed their Mark Zuckerberg wax figure in a t-shirt and hoodie. But the double chin, vampire fangs, and bangs? That's just mean. The next time you use Zuck's social media platform, make sure you know the 15 Facebook Habits You Need to Break! 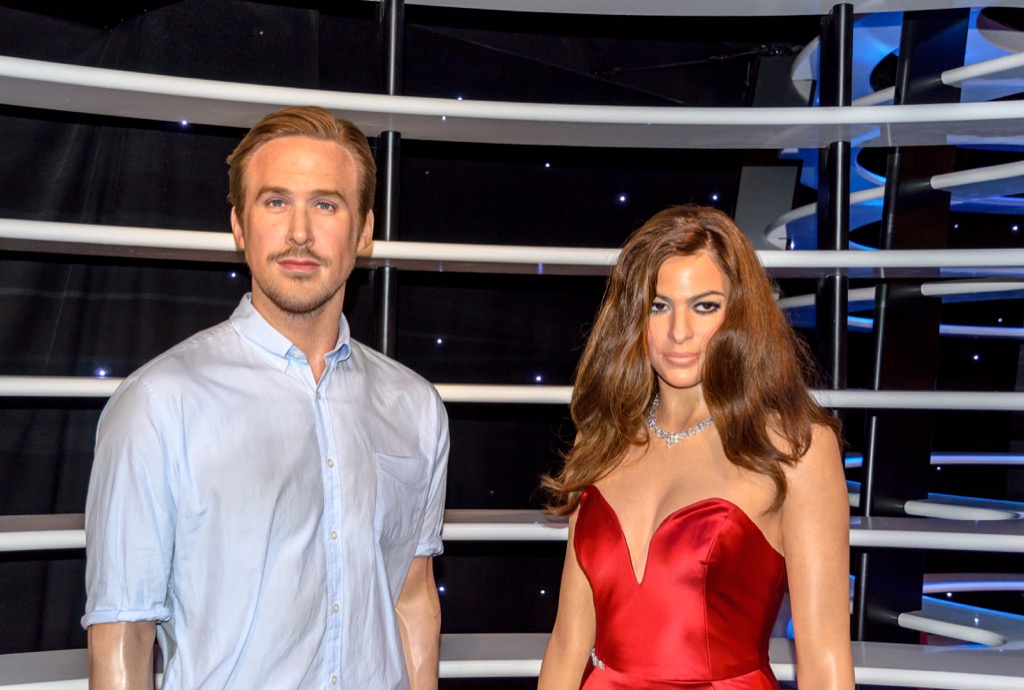 From the creepy mustache to the forehead you could ski down, the artist behind this Ryan Gosling-inspired monstrosity clearly isn't a fan of The Notebook. Unfortunately, his partner, Eva Mendes, doesn't fare much better. 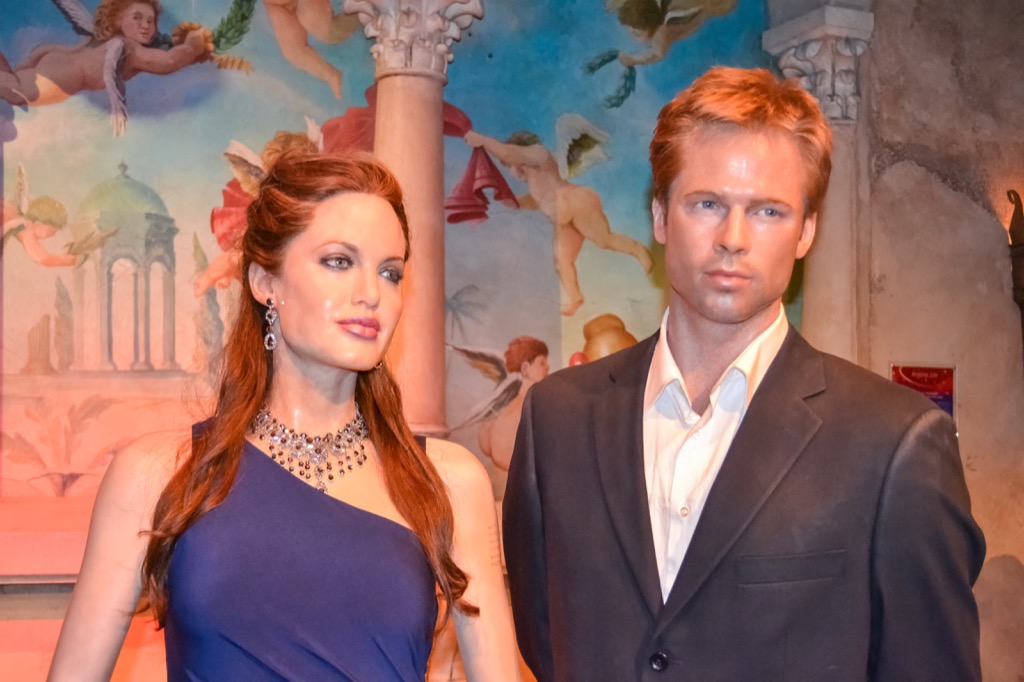 This Las Vegas wax figure duo commemorates that time Angelina Jolie stood near a Memento-era Guy Pearce. While his wax figure is bad, Brad Pitt is just one of the fortunate Famous Men Who Conquered Depression and Found Happiness! 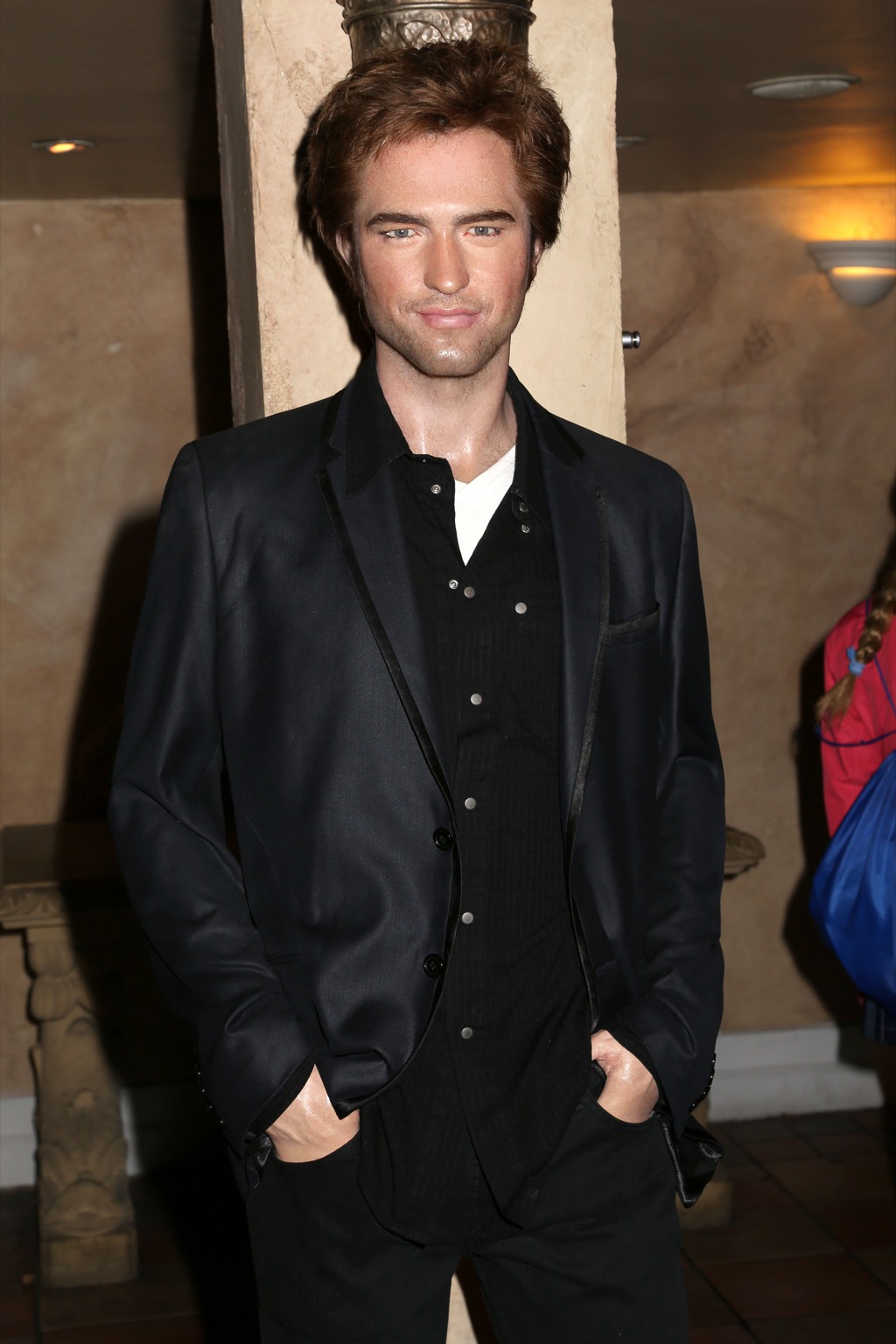 He may have played a vampire in Twilight, but the crazy hair on this Robert Pattinson wax figure makes it pretty clear some ancient aliens are involved. 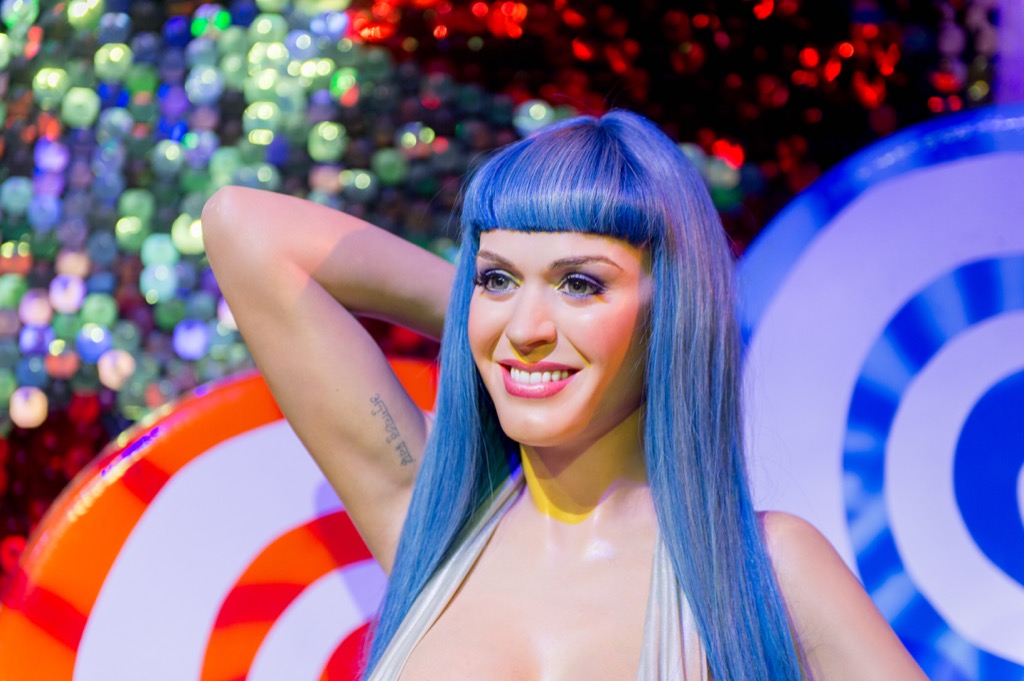 It's a shame that the artist behind this Katy Perry wax figure at Madame Tussauds Las Vegas chose to capture the pop star trying to hold in a sneeze. Fortunately, Katy is still a catch in real life—in fact, she's one of the 10 Celebrities Who Are on Tinder!