30 Funniest Commercials of the Last 30 Years

These ridiculous commercials will have you laughing out loud.

By the end of 2017, more than a quarter of U.S. households no longer had a traditional TV subscription. Those folks might be saving money, but they are missing out on the magic of commercials.

And while most of the time commercials are annoying—or, at the very best, provide us just the right amount of time to grab a snack—some of them are downright genius. If every commercial were as funny as the 30 on this list, people would be looking forward to watching them, rather than skipping past them on their DVR. For products ranging from sneakers to beer, these TV spots prove that a good piece of advertising is a work of art. And if you want some laughs you can take to your next party, here are 40 Facts so Funny They're Hard to Believe. 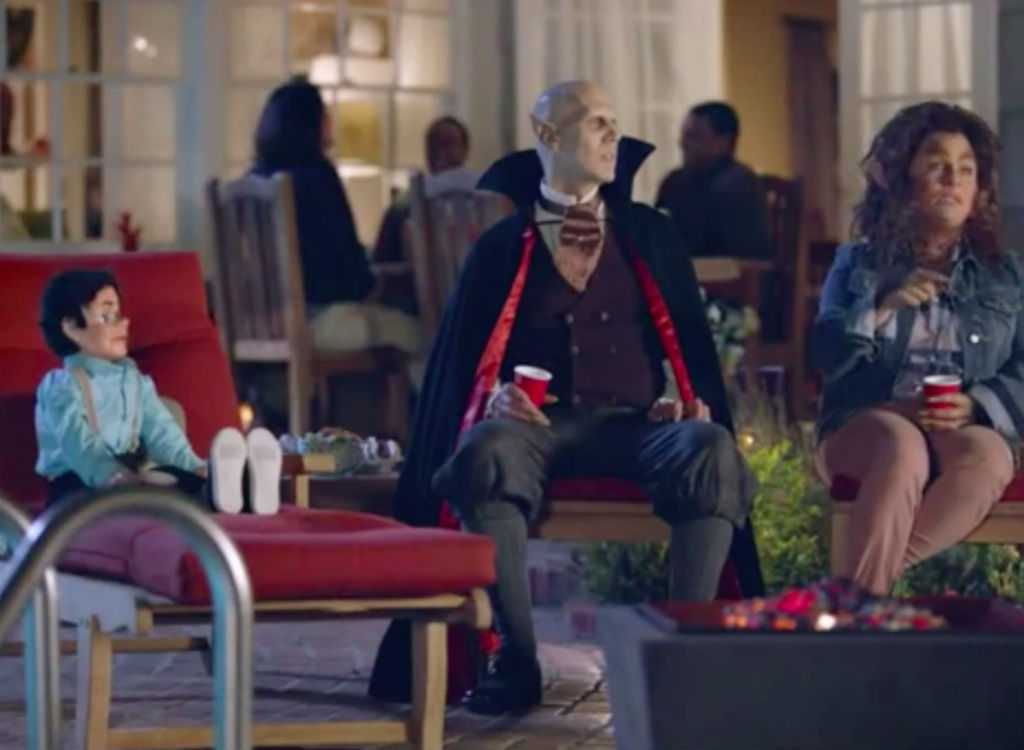 Even classic Hollywood monsters can't escape hidden contract fees from cable companies in this funny commercial from Spectrum TV, which features werewolves, a vampire, a haunted puppet, and a mummy, who is too gullible for his own good and admits to being tricked into his sarcophagus in the first place. If you're looking for more great laughs, check out the Funniest Sitcom Jokes of All Time. 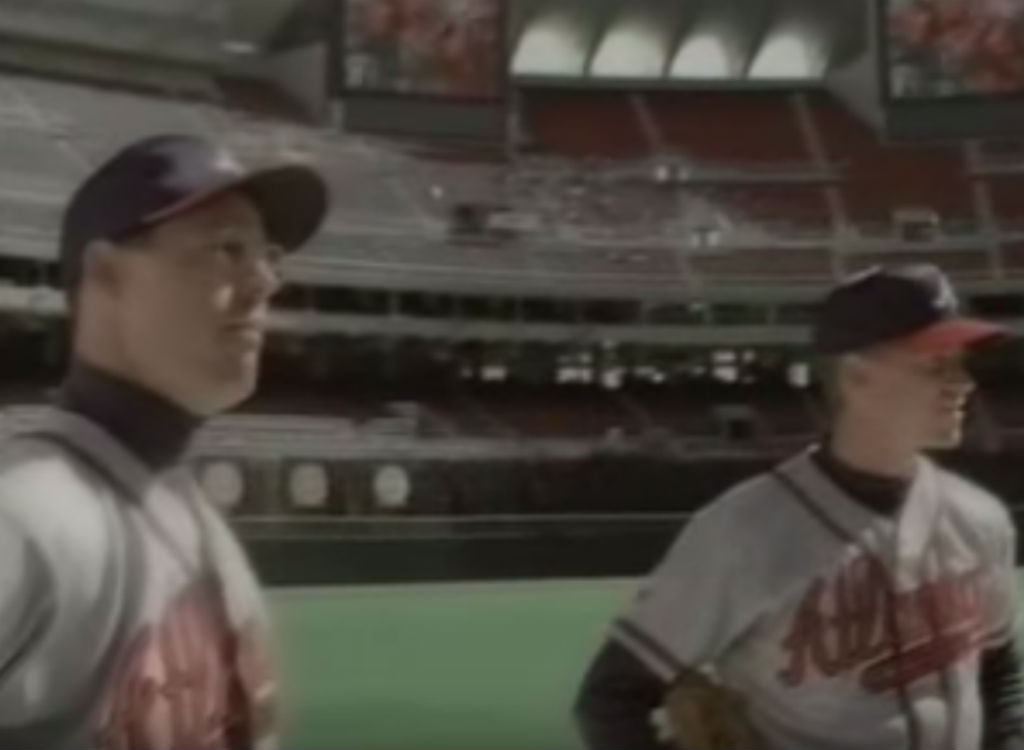 This classic Nike commercial has All-Star pitches Greg Maddux and Tom Glavine training to beef up like home-run slugger Mark McGwire, who seemed to get more female attention as a slugger and not a pitcher, brought the phrase "chicks dig the long ball" into the common vernacular. What makes it so funny is the fact that Maddux and Glavine are perfectly cast, and both are about as threatening as your typical high school math teacher. And for a different kind of sports laugh, check out the 30 Ugliest Uniforms in the History of Sports. 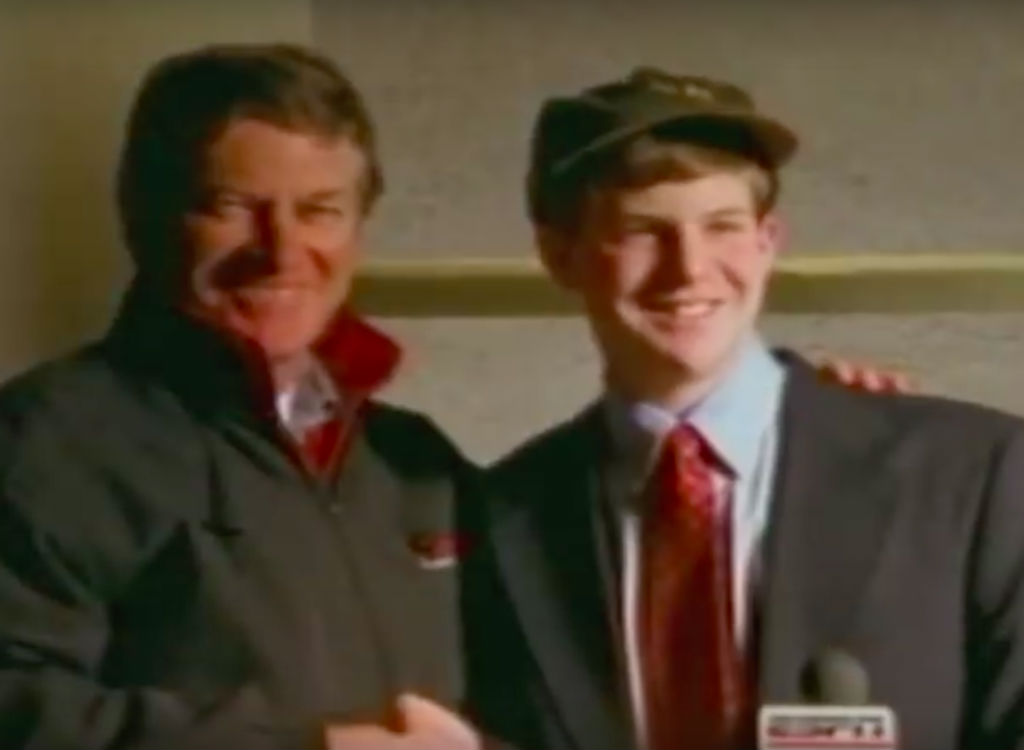 SportsCenter has released a slew of hilarious commercials over the years, but this one parodying a mistaken draft choice—they bring up a rookie broadcaster too young—deserves top marks for showing what happens when you promote green talent too quickly. And if you want more laughs from the youth of the day, check out these 50 Jokes From Children That Are Crazy Funny. 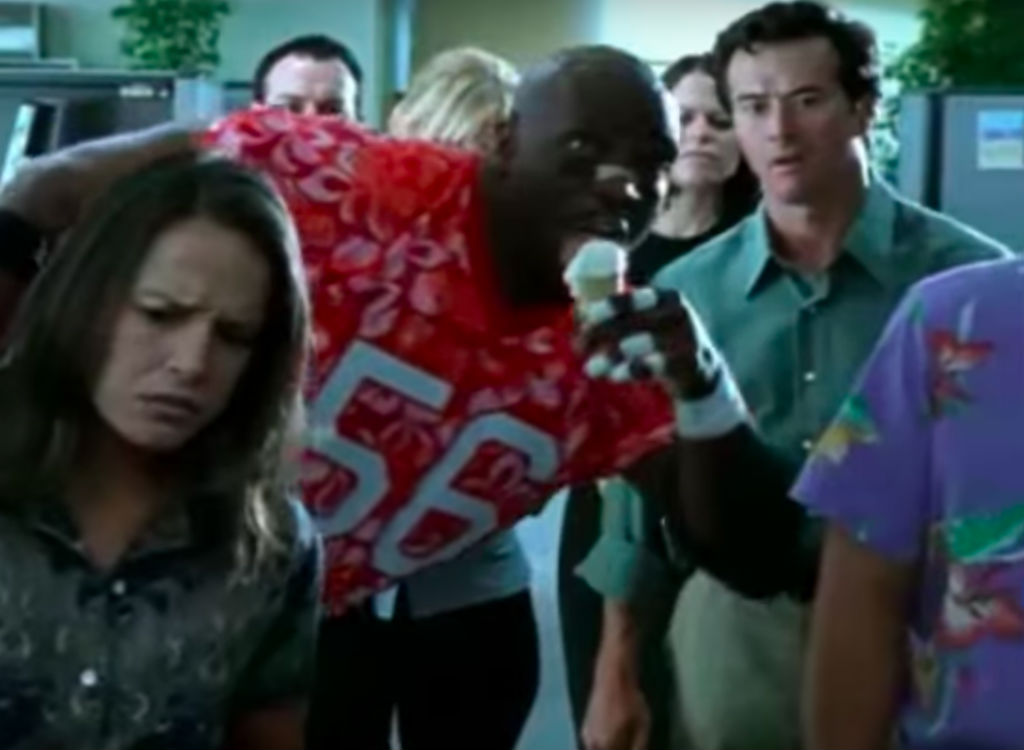 Traumatic brain injuries aside, it would be kind of wonderful to have an "office linebacker" like the one in this Reebok commercial to make sure people stick to workplace policies like refilling the coffee pot, recycling, and using the right cover sheets on reports. And if you're thinking a Terry Tate might not be for you, here are 20 Genius Ways to Make Work More Fun. 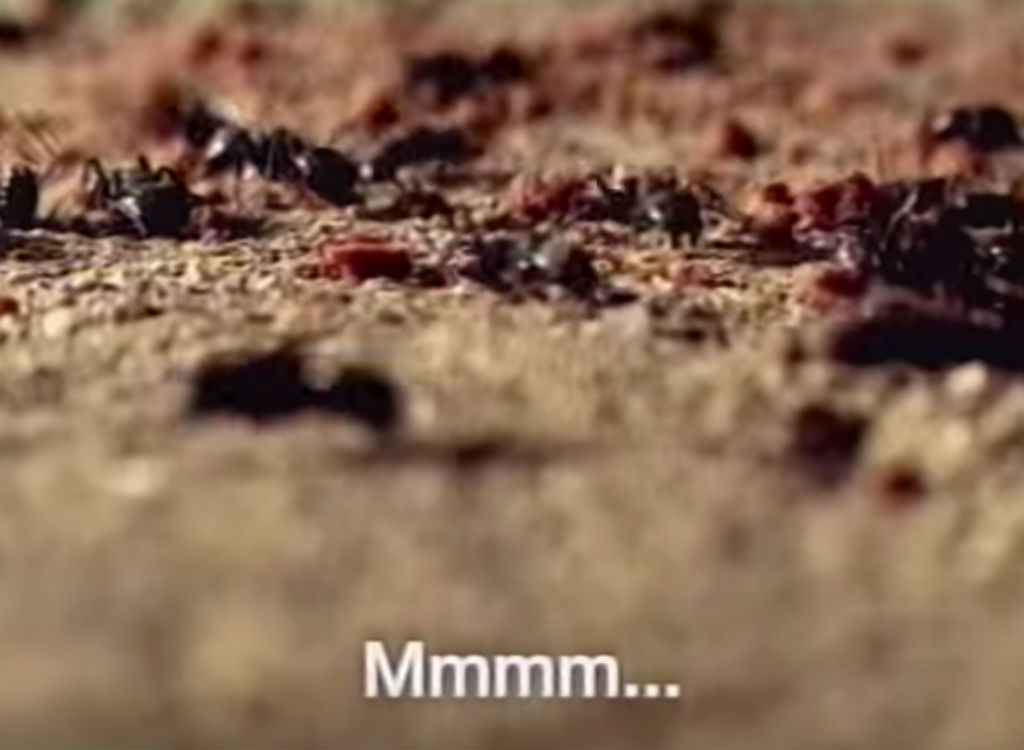 The only thing the ants want in this commercial is a little milk to wash down some brownies. But what they get is heartache when one brave fellow sets off on a doomed quest to bring something to drink back to his people. And if you think ants at a picnic are bad, check out the 30 Worst Things About Summer. The little lad who loves berries and cream in this Starburst ad is a comedic commercial classic. His wacky dance and strange song are still remembered over a decade later. It's the piñata man's over-the-top performance in this Skittles commercial that really sells it. And he has a right to be angry. To get beaten up by coworkers is bad enough, but to get beaten up for something as gross as chocolate Skittles really adds insult to injury. And for a lighter take on humor, here are 50 Funny Kid Photos That Will Make You Laugh Out Loud. This commercial from energy company Epuron about a lonely man who gets on the nerves of every single person he encounters has one of the best payoffs in the history of commercials when he is revealed to actually be the wind personified. And for more jokes you didn't see coming, check out 50 Puns So Bad They're Actually Good. Virgin Mobile takes us on a Cribs-style tour of the second-most famous man in the Pitt family, Doug Pitt, in this commercial. Yes, that really is Brad Pitt's brother, and his life is far from as glamorous as his famous brother's. And if this has got you feeling a little cringe-y, learn 20 Funny Jokes to Banish Awkward Moments. This Belgian commercial for Zazoo condoms offers a different take on responsible family planning, by reminding us all that if you don't have children, you'll never have to listen to them scream in the supermarket.

11
Old Spice — The Man Your Man Could Smell Like 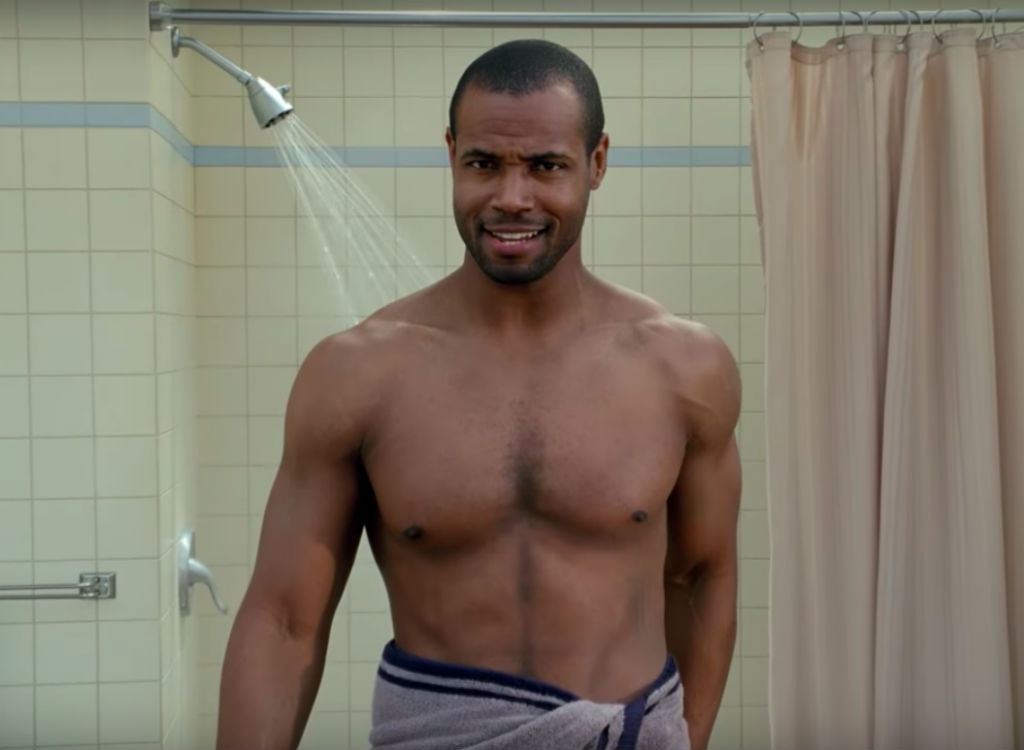 If the effects in this Old Spice commercial seem too good to be CGI, that's because they are. The entire commercial was filmed in one take and features Isaiah Mustafa explaining all the ways he's probably more manly than the man you're currently dating, including being on a boat and a horse. 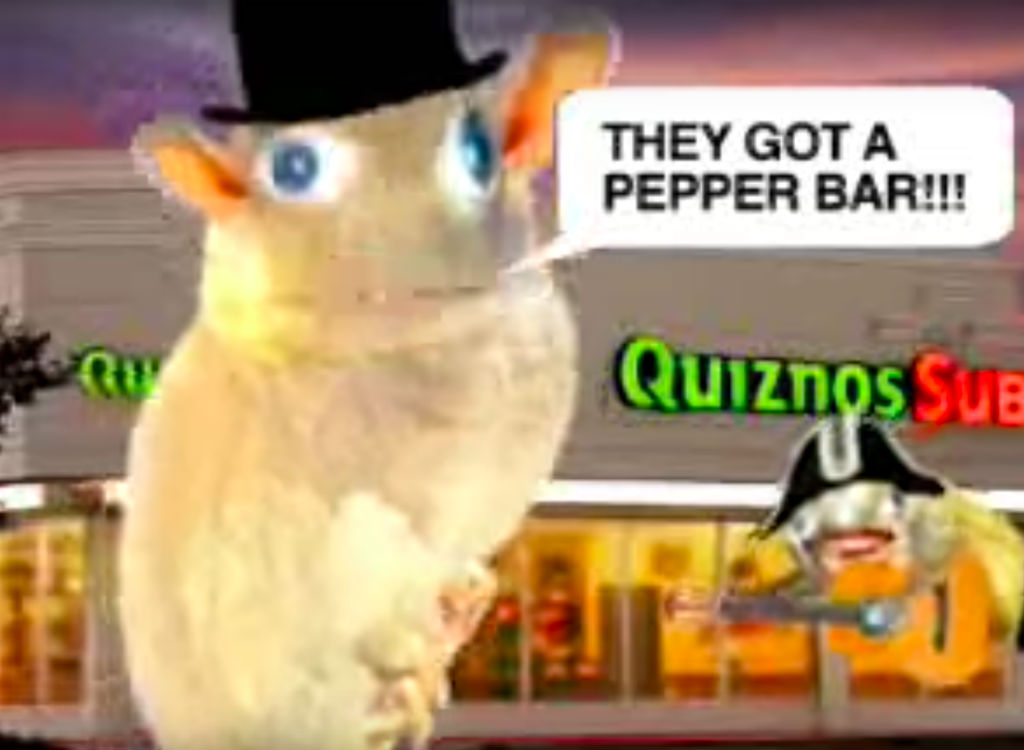 This strange, yet hilarious Quiznos commercial features the work of British animator Joel Veitch, known for his unique style. Some people found these creepy creatures and the song they sing (including a famous line about a pepper bar) mildly disturbing, but you can't deny their effectiveness. After 15 years, people are still laughing. 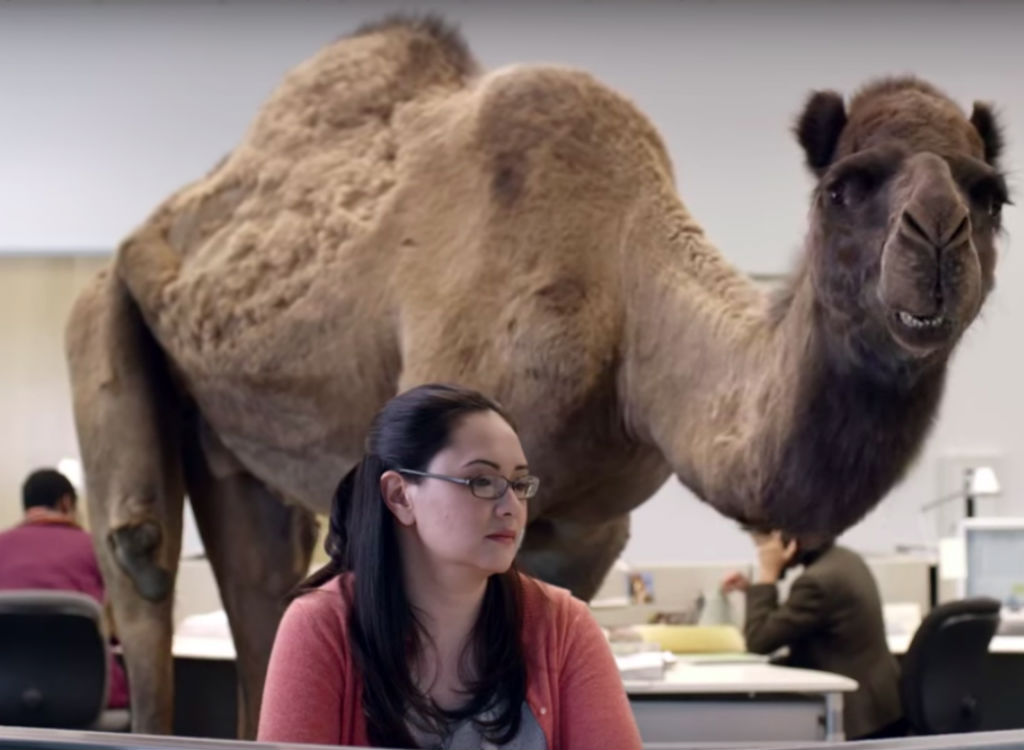 Geico has made too many hilarious commercials to count, but for sheer enthusiasm, the talking camel in this one can't be beat. After all, who's better to be excited about "hump day" at the office than your camel co-worker? 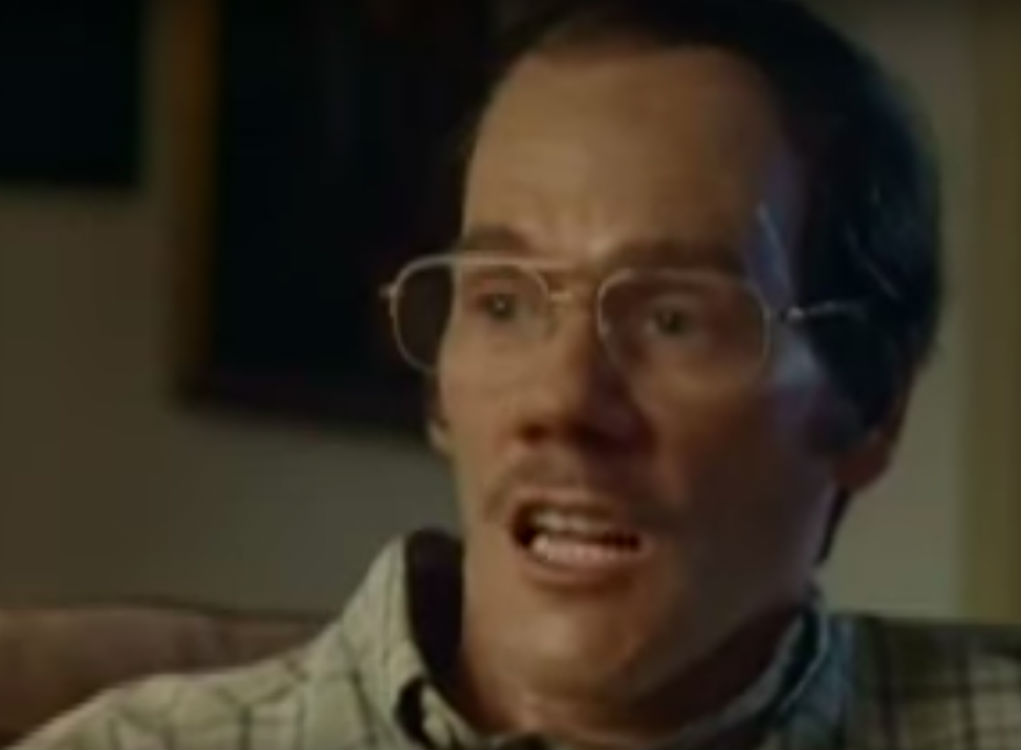 Kevin Bacon's Kevin Bacon impersonation in this commercial for Logitech is just off enough to be creepy and just on enough to be funny. He quotes his lines from movies and plugs his own band, all while looking ever-so-slightly not like Kevin Bacon, thanks to convincing makeup. 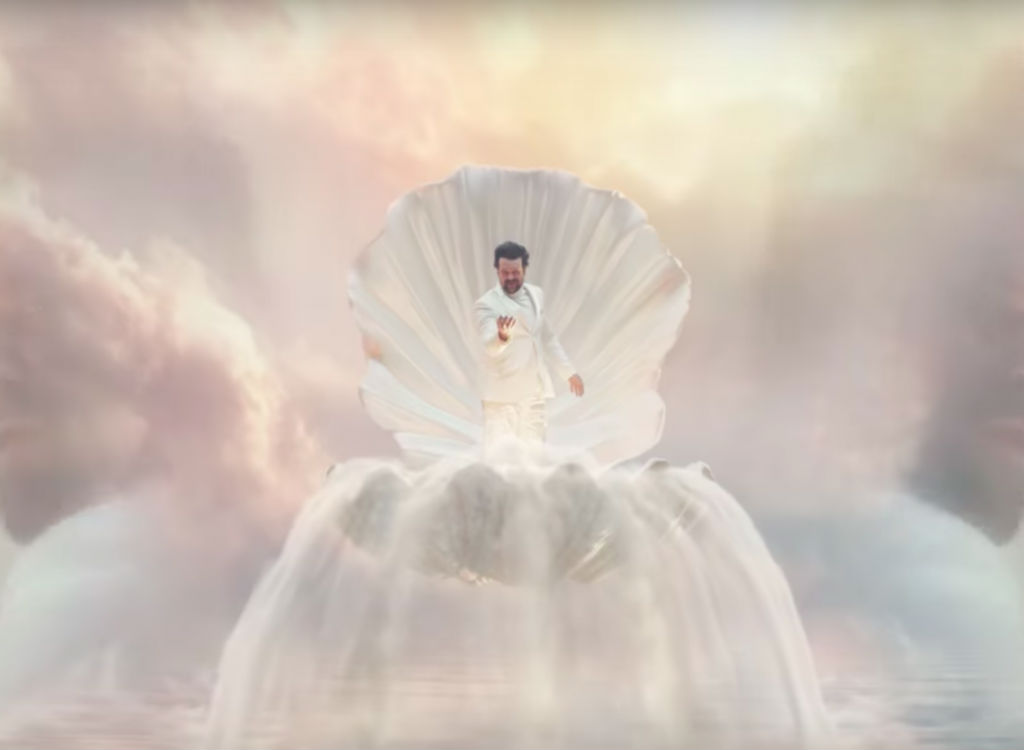 This commercial from Tide for the 2018 Super Bowl, featuring Stranger Things star David Harbour, was not only funny, it also managed to co-opt every single other ad that played during the game by virtue of pointing out that any ad featuring stain-free clothing is also an ad for Tide. And if you love David Harbour, you're not alone. Here are 7 Reasons We All Crush on Stranger Things' Jim Hopper. 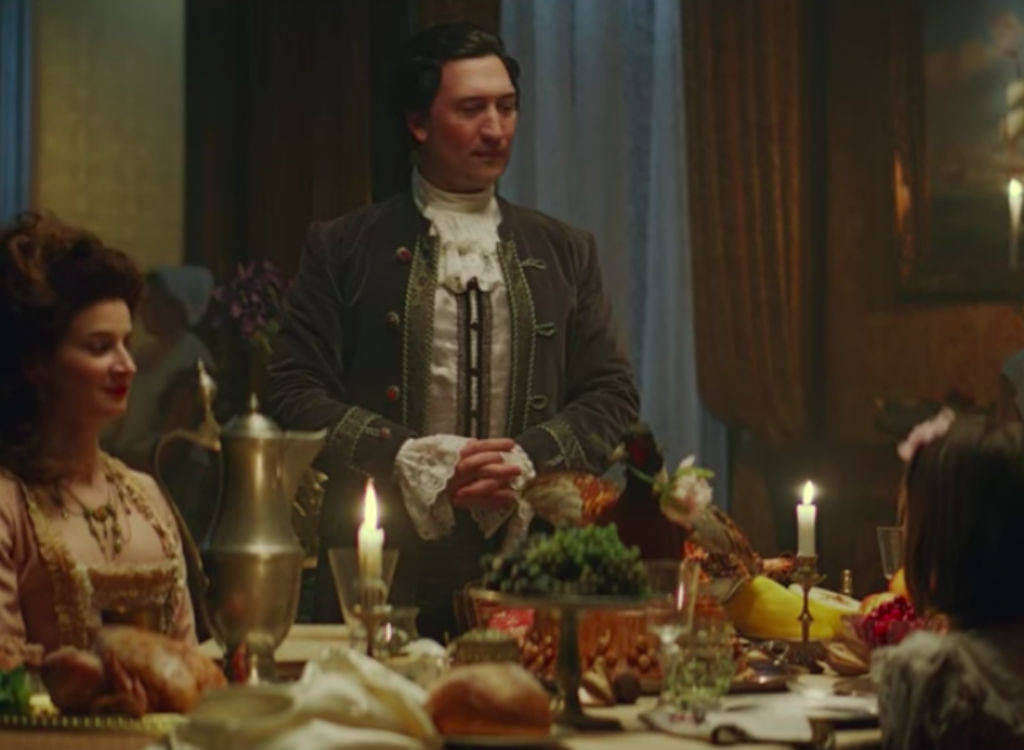 IKEA raises an interesting point in this commercial. If people lived like there was Instagram 200 years ago, everyone would have starved to death waiting for likes from their social networks to validate the painting of the dinner they're waiting to eat. 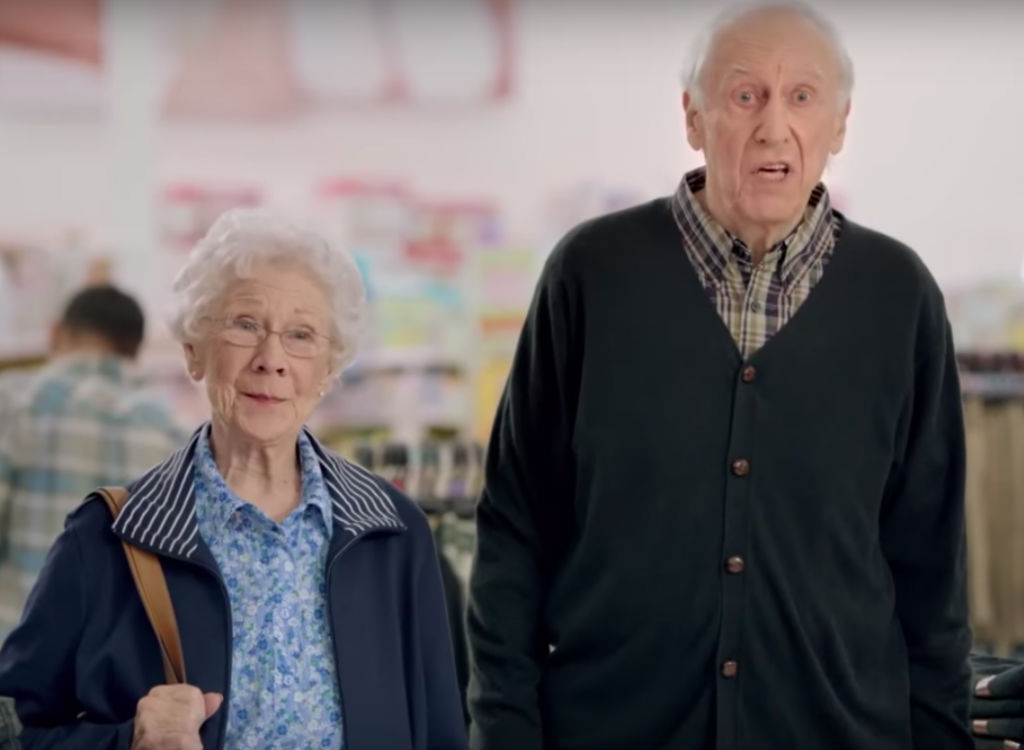 You'd never think an ad would be able to get so many laughs out of a single play on words, but Kmart nails it in this commercial about customers who are all very excited about shipping their pants. 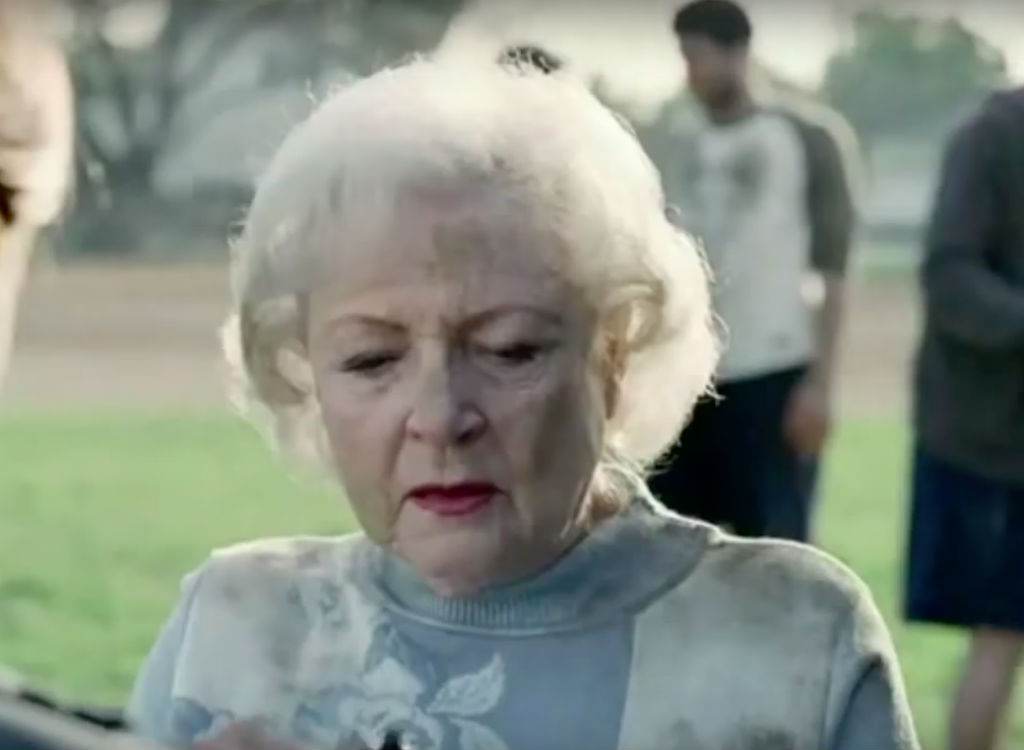 The humor in this commercial stems mostly from watching Betty White get tackled on a football field, which is equal parts funny and nerve-wracking. She also manages to chuck out a good insult before eating a Snickers and turning into the man she was all along. 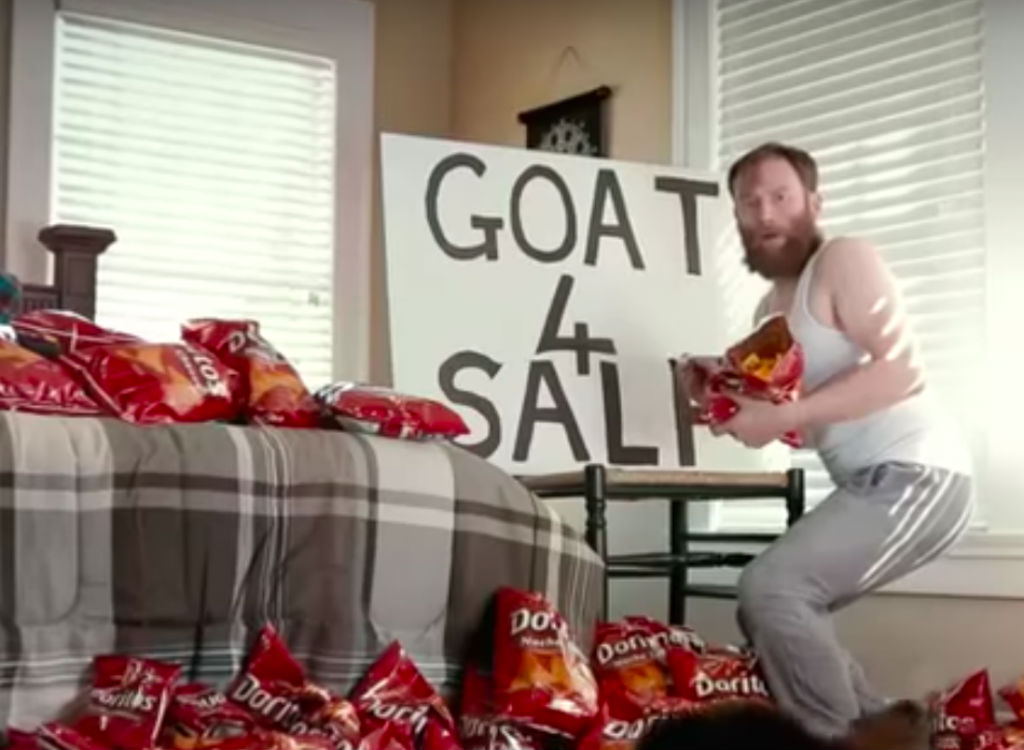 You can say whatever you want to about this Doritos commercial, but you can't deny that it is always hilarious to hear a goat scream. And fortunately there are goat screams aplenty when the pet a man brought home in a rather foolhardy manner discovers that its endless supply of Doritos has dried up. 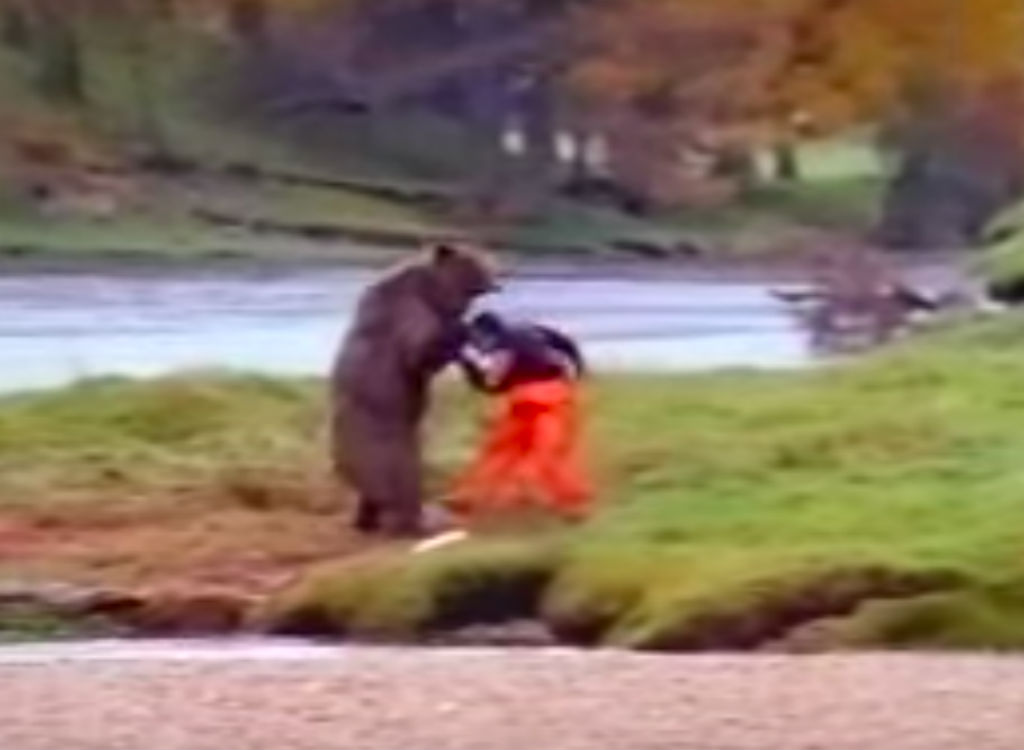 It's man versus bear in this ridiculous commercial from UK seafood company John West, where an employee goes head-to-head with a bear to bring back only the best salmon for the company. 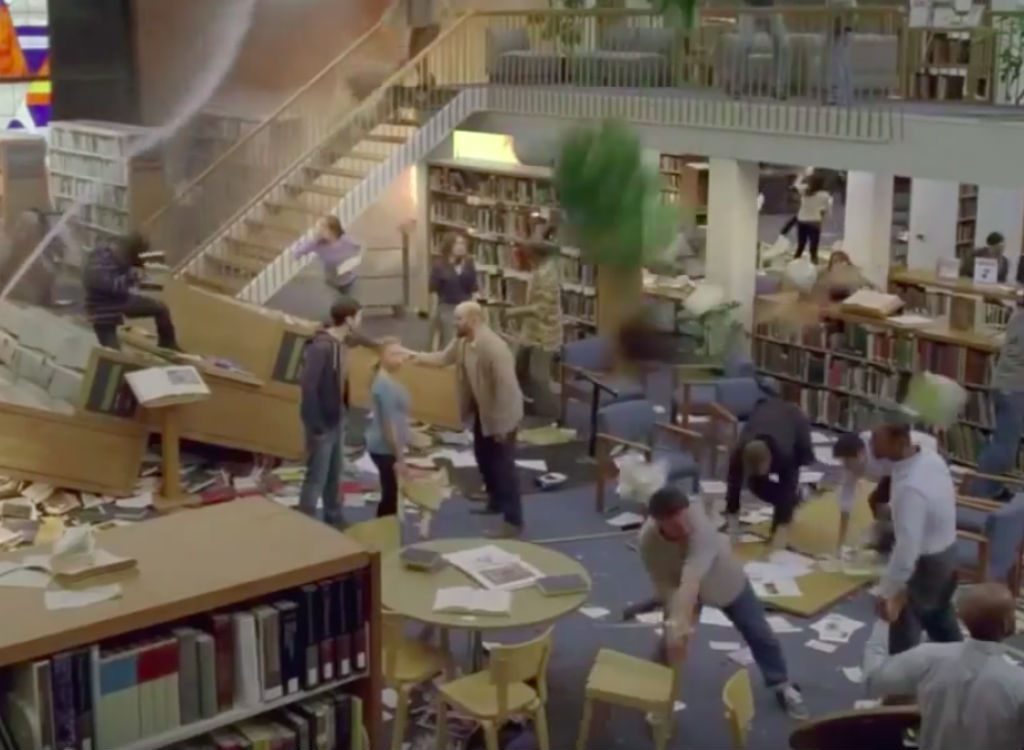 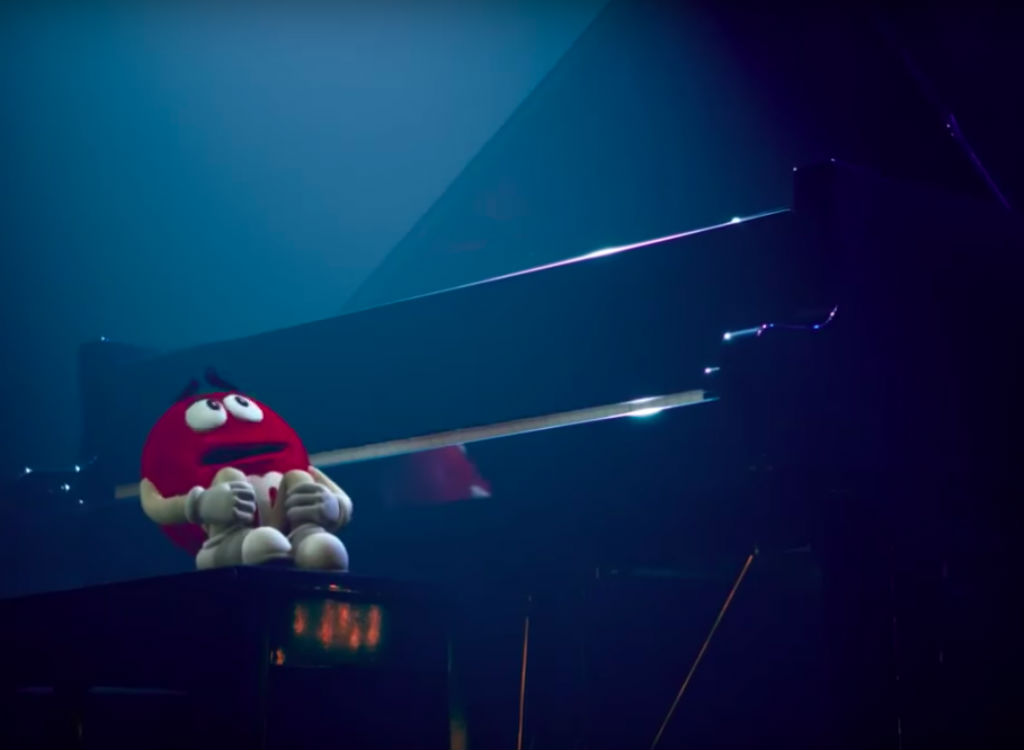 People joke about the cannibalistic tendencies of M&M ads, and this commercial really highlights the sheer horror an anthropomorphized piece of candy would have to live through to be in a relationship, including getting tossed into an oven, stuck in a bowl of popcorn, and even getting licked on the couch while trying to watch a movie. 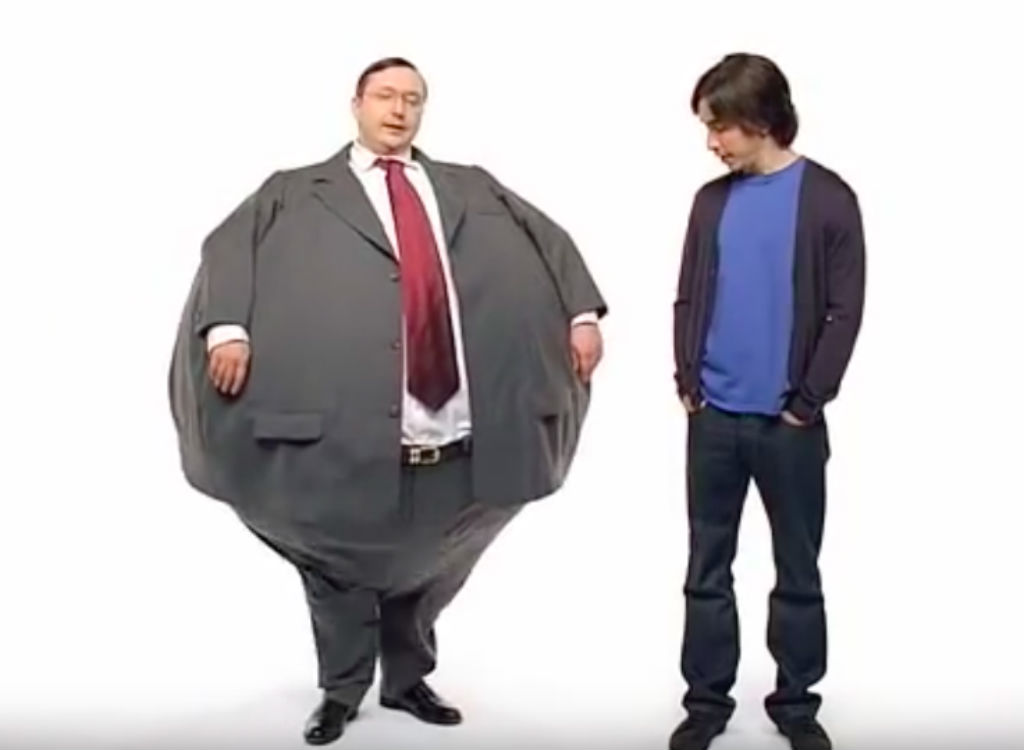 This is just one of many ads from the classic Mac vs. PC commercials from the late '00s. Rather than standing around and comparing themselves, in this one John Hodgman shows up in an enormous suit made of bloatware and trial programs to deliver a little physical comedy instead. 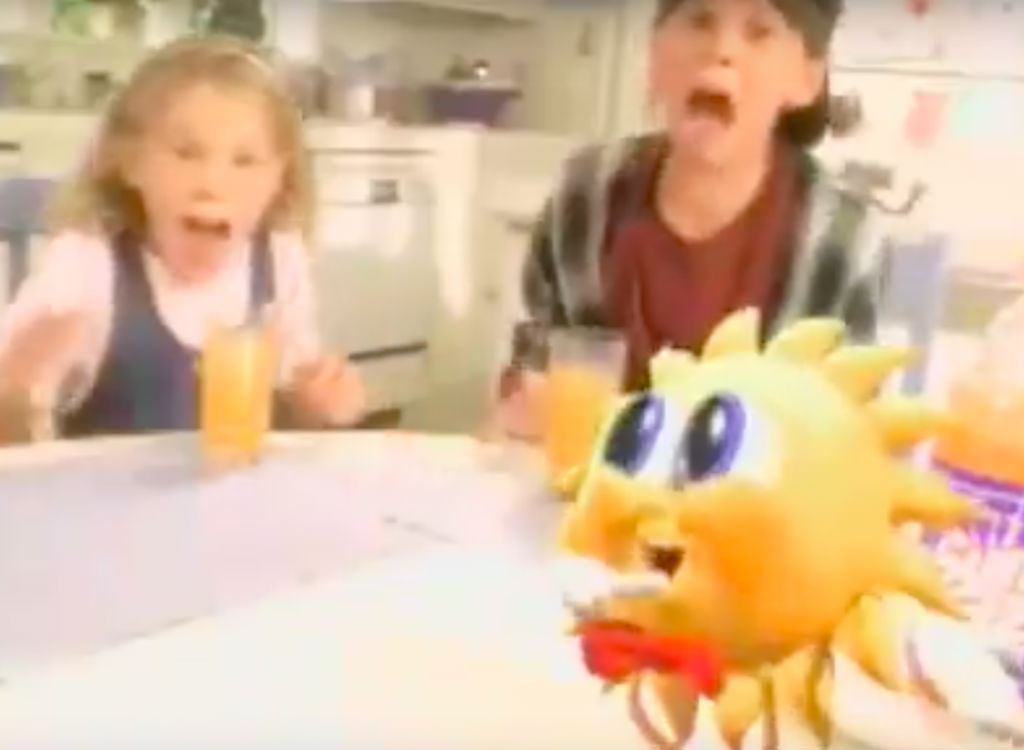 Image is nothing, and thirst is everything in this Sprite commercial about how terrifying it would be if a beverage mascot unexpectedly sprang to life. One minute these kids are drinking some "Sun Fizz," and the next, a cartoon sun is chasing a screaming family around their home. 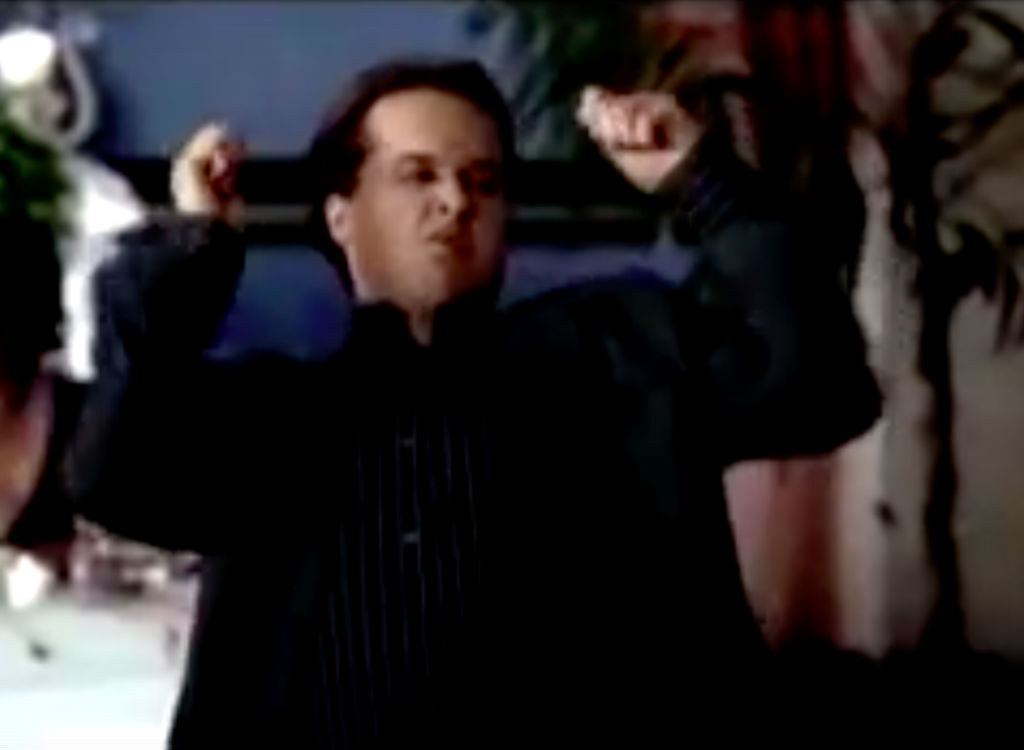 The Bud Light Real Men of Genius series of commercials featured several hilarious ads, but it's hard to top this one, which has a man dancing enthusiastically—and terribly—at weddings, in an elevator, and pretty much anywhere else he can. A man in the recording studio singing his praises is the cherry on top. 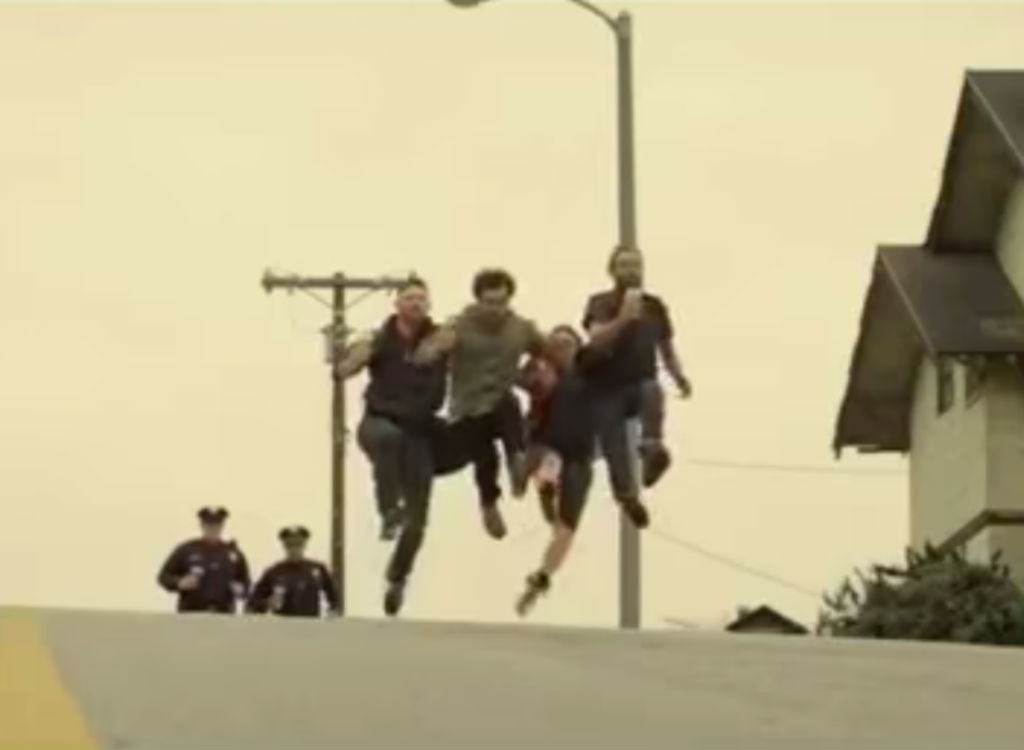 This ad for Australian beer Carlton Drought does a humorous take on a classic chase scene by removing the cars entirely to prevent drunk driving. Instead, it features a lively foot chase between a bunch of robbers and police officers that still hits all the car chase tropes, including smashing through glass, careening into a pile of boxes, and a slow motion leap over the crest of a giant hill. 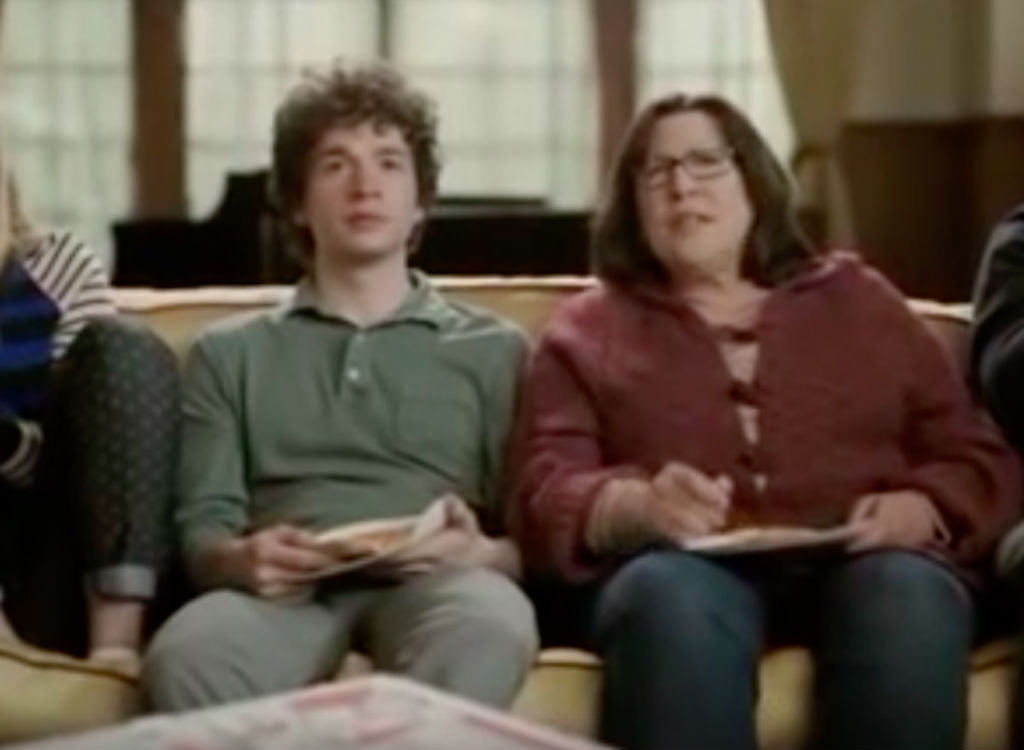 HBO Go raises an important point about the pains of watching TV with your family in this advertisement. Namely, your parents are going to interrupt the entire show with questions and try to identify where they recognize the actors from instead of watching the program. Although, if you're watching Game of Thrones and the most awkward part is only that your parents talked the whole time, you've really gotten off pretty lucky. 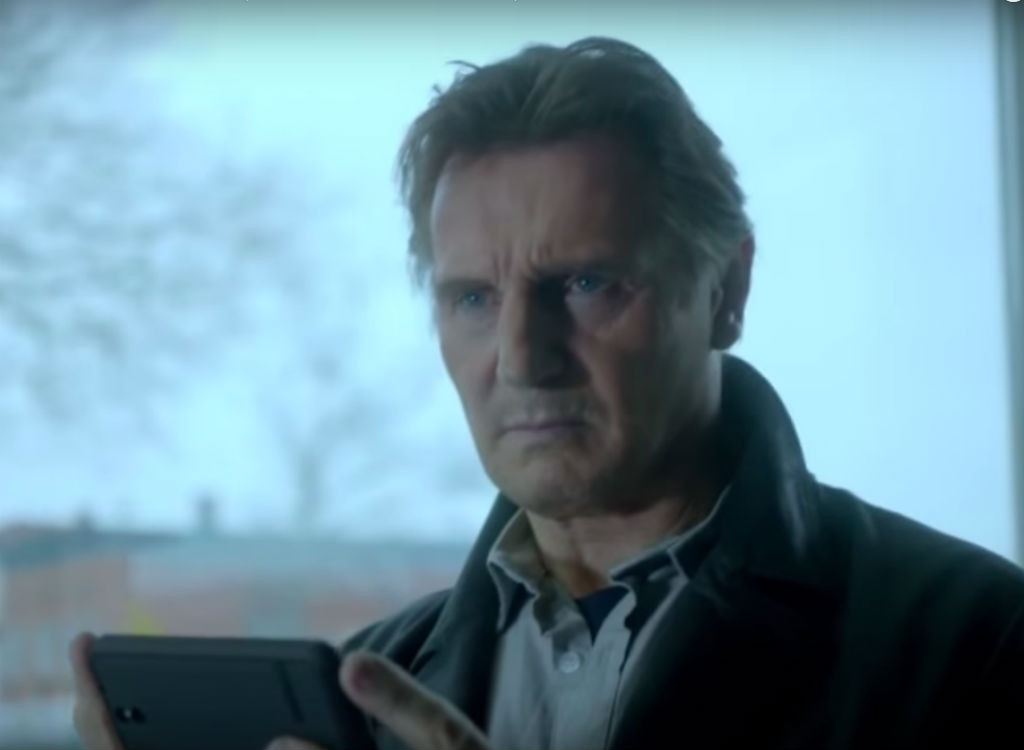 This funny ad for Clash of Clans uses Liam Neeson's reputation for exacting revenge onscreen as the setup and makes him say "Big Buffet Boy 85" as the punchline by setting him on a quest for vengeance in the game after being defeated. 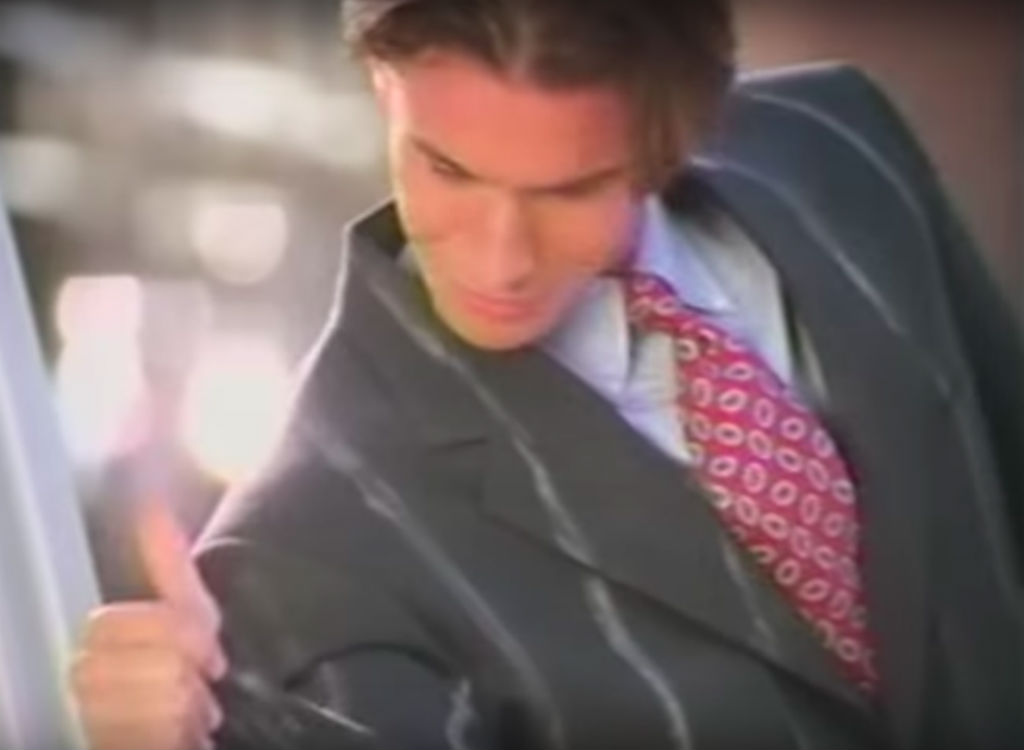 Mentos commercials like this one, where a guy gets some paint on his suit, were huge in the '90s, so much so that Foo Fighters even used them as inspiration for a music video. In hindsight, though, it kind of seems like Mentos are really good at giving people really bad ideas, because the best solution to sitting on a freshly painted bench that hasn't dried yet probably isn't to cover your entire suit in paint.

30
Cadbury — In the Air Tonight 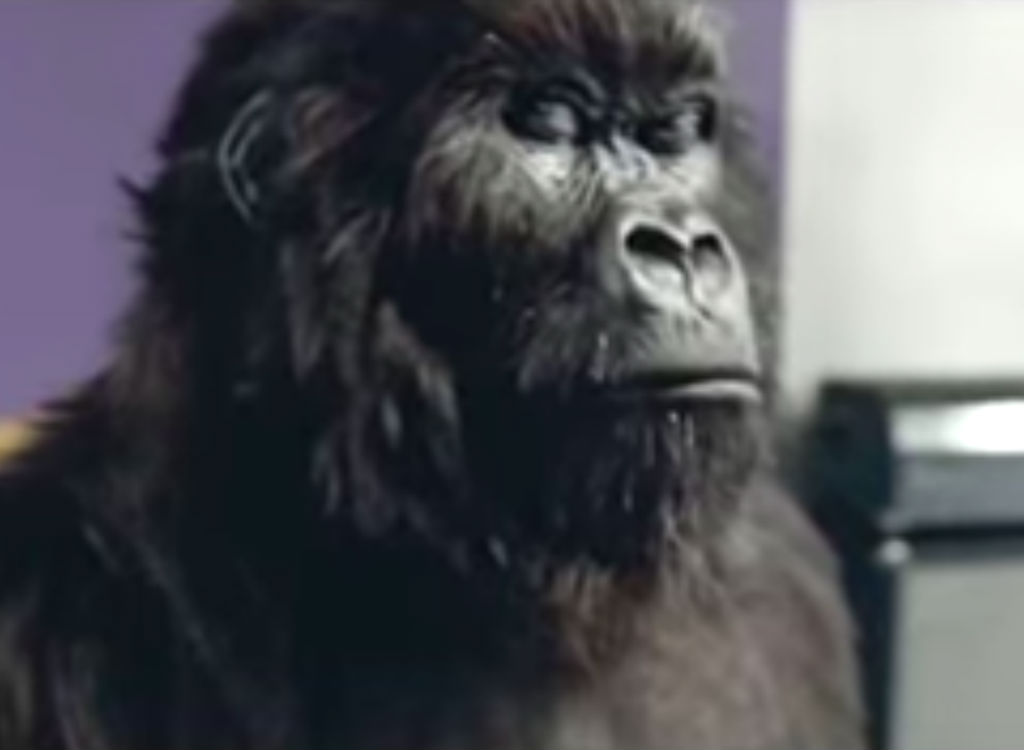 Nobody, not even a gorilla, can resist Phil Collins' drumming in his song "In the Air Tonight." What does that have to do with Cadbury chocolate? That's still unclear, but at least we got a hilarious ad out of it, which features a gorilla behind a drum kit passionately playing along to the tune. And if you want even more laughs, check out the 30 Funniest Celebrity Commercials.