30 Ugliest Uniforms in the History of Sports

Welcome to a true sports Hall of Shame.

When it comes to sports uniforms, it's generally understood that simpler is better. Alabama, Penn State, the New York Yankees, the Chicago Bears, Notre Dame—they all share a common thread: no-frills design and strong, simple colors. The 30 uniforms that follow? Well, they're the exact opposite: a collection of spectacularly loud and obnoxious sartorial misfires that deserve a place in a clothing design Hall of Shame. For a tour of true eyesores, ranked from ugly to supremely ugly, read on (but we'd advise you to wear a pair of sunglasses). And for more on bad style, don't miss the 40 Things No Man Over 40 Should Wear to Work.

This probably wouldn't have made the list if Yankee great Derek Jeter hadn't been sent to the minors on a rehab assignment in 2011. But he was, and there he is: one of the greatest players to ever live, dressed as an optical illusion. Now, for more of what you should wear, here are 14 Must-Have Looks from The Year's Most Anticipated Movies.

There must have been a logical reason that Madrid's Club Deportivo Palencia Balompié thought dressing their players like a museum exhibit on human muscle was a smart competitive move, but we can't for the life of us think of
what that might be.

Why nobody at the LA Kings said, "You know everybody is going to think this looks like the Burger King mascot," is simply beyond us. For more fun facts, check out these 30 Celebrity Names You're Mispronouncing.

At 55, Prince Hubertus von Hohenlohe was the second-oldest winter Olympian in history. But he remains the first Olympic skier to wear a mariachi outfit.

If there's one thing we all know about sports, it's that everybody plays better in plaid. For more style coverage, here are 38 Things No Man Over 40 Should Wear. 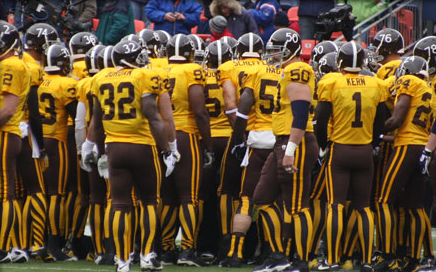 Maybe it was the yellow and brown color combo. Maybe it was the vertical-striped leggings. Whatever the case, you put them together and you've got one truly hideous football uniform.

If you thought, "Hey, that looks like a rapper designed it," you'd be right! Flo Rida thought this would be a fitting tribute to his alma mater. Please note not one but two Native American headdresses: one on the head, one on the pants.

You know you've got a great uniform where it immediately makes people think of the fisherman mascot from Gorton's Fish Sticks.

Team USA's 1999 Ryder Cup Polo was a true atrocity, covered in dozens of framed pictures of… what exactly? If your shirt looks like something your uncle made for a family reunion, it doesn't belong in a professional sporting event.

The price is wrong, Fresno! Of all the theme night ideas in all the world, you had to go with… The Price Is Right?

This "everything but the kitchen sink" design is giving us vertigo. Even the helmet can't decide what it wants to be! Sorry, Maryland, but you're taking that whole state-flag branding thing too far.

There are a lot of terrible role models for professional athletes to have, but Charlie Brown is probably the worst of them. You know he always missed the ball, right?

Stars. It's such a great team name. Do you have to make everything in a bull, Texas?

Yes, they look like waitstaff uniforms for a sheriff-themed diner next to a highway rest-stop.

If there's one thing that make kids more excited than tickets to a ballgame, it's hearing their dad say, "Good news, it's 'Tribute To Memphis, Egypt Night,' with uniforms written in hieroglyphics!"

The Norwegians raided my grandfather's closet!

Some retro throwback uniforms are a great idea, but some end up looking like this. Is there anything that strikes less fear in an opponent than barber-pole stripes?

Is that the font from The Munsters?

The 1990s saw the explosion of all things purple, teal, and, you know, in your face! This was the uniform equivalent of that trend totally "jumping the shark."

Forget the faux formal wear and check out the 20 Sharpest Suits You Can Buy On Amazon Right Now.

We're all for honoring our veterans. But there's gotta be a better way than this.

It's hard to tell if they've come to play hockey or dance their buns off to "Disco Inferno."

These "throwback" uniforms were brought back by the Steelers in 2012 to celebrate the team's 80th season in pro football. And also because they apparently wanted to dress like the girl in that Blind Melon video.

There's a reason why shorts are one of the 40 Things No Man Should Ever Wear to Work. That applies to baseball players, too.