There are four extremely unexpected things that came out of Netflix's incredible second season of Stranger Things.

3) Bob the Brain went from boring dude that you couldn't wait for Joyce to dump to superhero whose untimely demise you cried over for the rest of the series. (#justiceforBob)

4) And, as anyone who's watched the show can tell you: Jim Hopper became hot.

This transition came as a bit of a surprise, because while the town sheriff is undoubtedly a good dude who saves the day in Season 1, he's also kind of a sad, shlubby drunk, whose main purpose seems to be punching people. It's not that you disliked him in Season 1, it's just that you didn't think of him that way.

Then suddenly, you're midway through episode 3 of Season 2 and you realize you're starting to feel things that you don't know what to do with. All of a sudden you're fantasizing about living with this curmudgeonly nicotine addict in his murder shack in the deep woods, eating Eggos for breakfast and making trip wires all around the house so you can do the dirty in peace for days.

Even David Harbour, who plays Hopper, knows that he's become both a dad and a daddy:

So what happened? Let's deconstruct.

1)His dad vibes are seriously hot.

From the moment that you first see that wide-angle shot of him eating dinner with Eleven, you can't help but fall in love with him. Sure, it's nice enough for him to take her in, given that, you know, it can lead to him being imprisoned and/or killed by an evil government agency, but then he totally leans in to the whole awesome dad thing. It would be so easy for him to be like, "Hey, kid, hide under the covers while I'm out, and stay out of my way when I get home," but he actually puts in the effort to discipline the little starling, instilling strict rules, making sure she eats dinner before dessert, teaching her how both sweep and use Morse code.

In the final episode, you're reminded that Hopper lost his daughter, Sarah, to cancer when she was around Eleven's age. If you really want to be stabbed in the heart with emotion, take note of the fact that the bracelet that Eleven wears to the Snow Ball is Sarah's old hair tie, which he wears throughout the show.

2) His "struggling not to cry because I need to be brave for this little girl" face is unbearably sweet.

There's nothing wrong with a man crying (and, in fact, expressing emotions is healthy and attractive), but the way he struggles with his own anguish and feelings of failure, especially in light of Sarah, in order to make Eleven feel like she's being take care of by someone who has his stuff together is heart-achingly paternal. 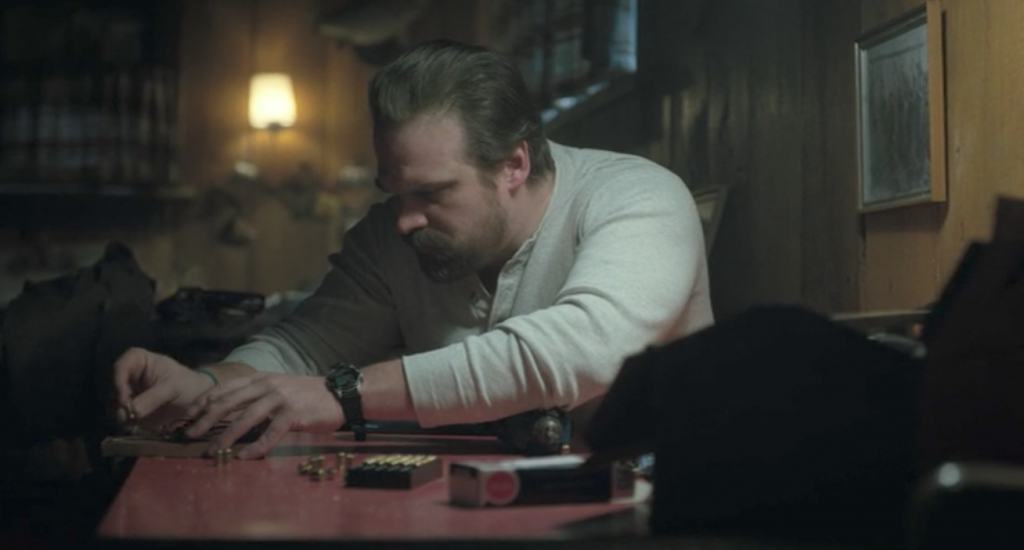 It's a bit of a cliché, but it never stops being hot when a man knows how to both make dinner (even if it's a TV frozen dinner) and make a trip wire and teach a little girl to do it. Hopper's the kind of guy you're going to want around when the apocalypse comes, that's for sure.

4) He learns from his mistakes. 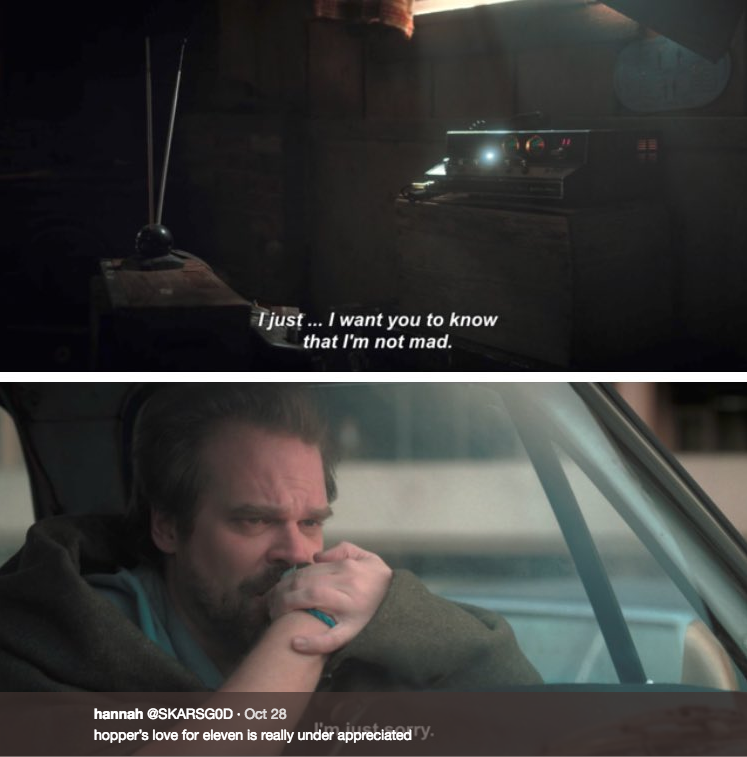 The importance of this cannot be overstated, and it's an especially hard quality to find in men with gruff exterior like Hopper, whose sense of masculinity often seems to be based on the myth of I am the man and I am always right. Hopper, on the other hands, knows when he's done messed up. And more importantly, he knows when to push his pride aside and admit that to the one he's wronged. Those are the building blocks of a healthy relationship right there.

It only lasted a few seconds but as soon as he started shimmying his hips to Jim Croce in an effort to cheer up a gloomy and malnourished Eleven, you knew it was going to be iconic. Indeed, there is now an entire Twitter account dedicated to him doing the Hopper to everything from Despacito to Barbie Girl to NSYNC, and each one clip is funnier than the last. As much as you want a man who will be there for you and protect you, you also want one who's going to put his serious face aside to do something unabashedly goofy to brighten up your day.

6) He's always there for the people he loves. 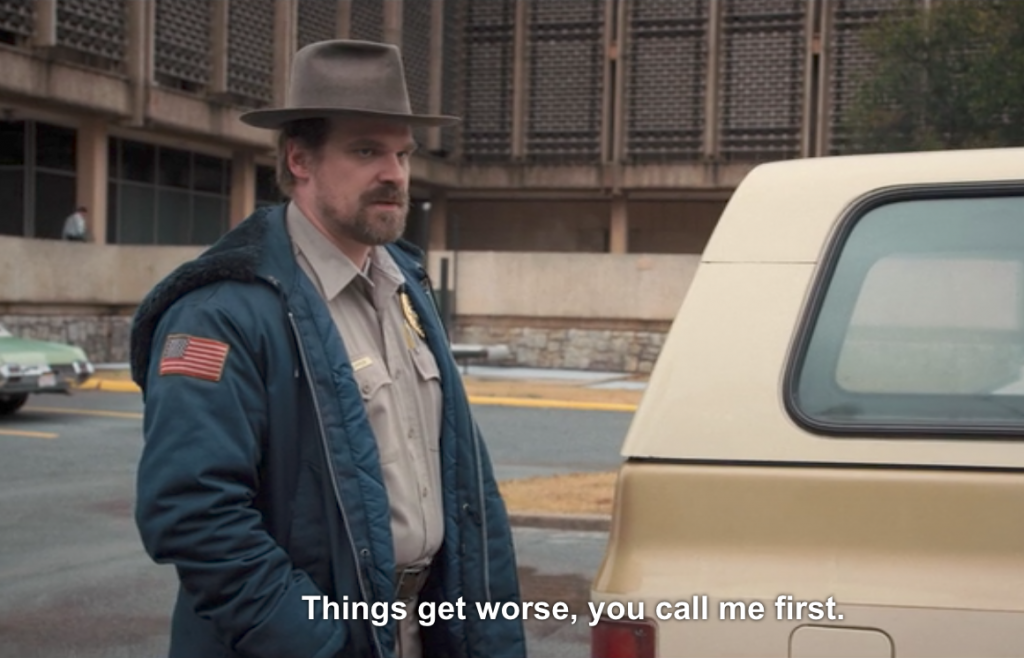 Ultimately, this is the most important thing. The moment I really decided to lean into my attraction to Hopper was halfway through episode 1, when he and Joyce are walking out of Hawkin's Lab after Will's checkup, and he tells her "Things get worse, you call me first," and then repeats it. When he gets the call, he doesn't ask questions. He just gets in his car and drives over. That's the kind of reliability that makes a man a man.

7) The face he makes whenever he looks at Joyce.

This is obviously the oldest trick in the book, but the whole man-pining-over-high-school-sweetheart never fails to pluck at heartstrings. In Season 1, they seemed to have a pretty straight -up small town sheriff and hysterical-mom-looking-for-her kid vibe, but the relative normalcy of the second season shows that they have some pretty cute history.

Smoking together in middle school is pretty much the small town Americana formula for falling in love, which begs the question: were they ever involved? Is there a reason that Joyce gives him a knowing look when he teases her new beau? Are these feelings new or old feelings resurfacing? We'll probably have to wait until Season 3 to find out, but either way, while everyone here is like all "Get you a man that looks at you like Mike looks at Eleven," I am here coveting the husky, lingering stare of my warm, lumbering grump.

Diana Bruk
Diana is a senior editor who writes about sex and relationships, modern dating trends, and health and wellness. Read more
Filed Under
Entertainment • TV
Read This Next
Latest News
Read This Next