The 30 Funniest Things Celebrities Have Said About Marriage

A little humor goes a long way in marriage.

Anyone who's entered into the bonds of marital bliss can tell you that being committed to one person can be an exhilarating, perplexing, and ultimately hilarious ride. While some relationship issues are best discussed behind closed doors, these celebrities know that Twitter is often a better forum in which to reveal the good, the bad, and the funny of their marriage.

If you're ready to crack up, check out these hilarious celebrity tweets about marriage. And when you want to heat up your own union, start with the 50 Best Marriage Tips of All Time! 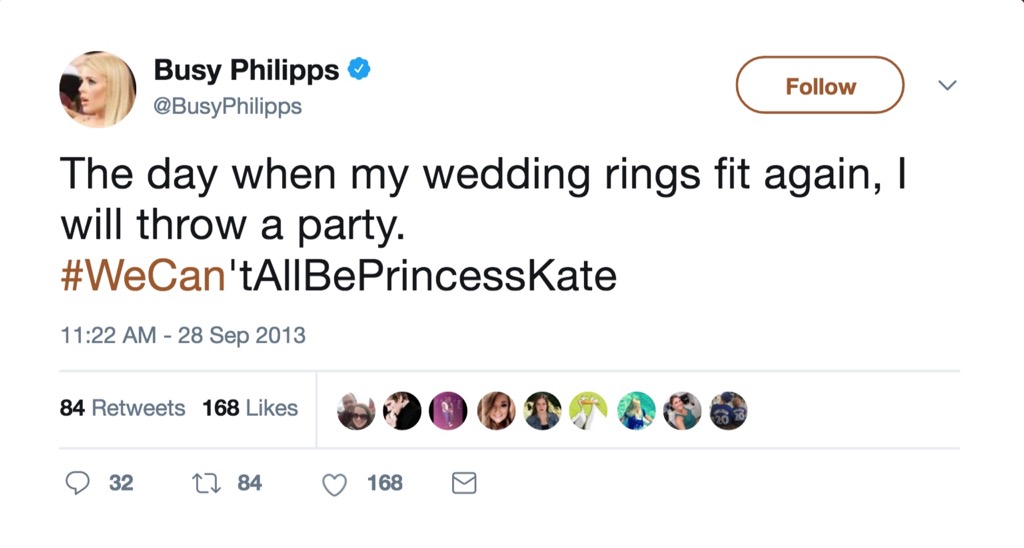 Those symbols of commitment still mean something to Busy Phillips, even if she can't wear them. And for more hilarity, brush up on Ryan Reynolds' 30 Funniest Tweets!

2
On Setting Up Future Spouses 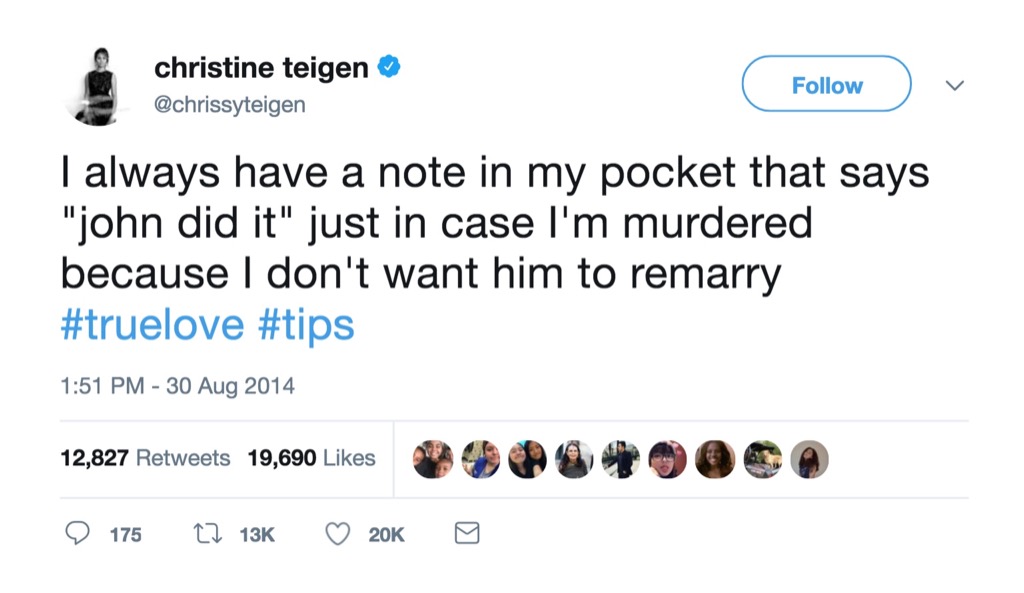 Chrissy Teigen isn't about to let her husband, John Legend, move on so easily when she's gone. And when you want to snag a catch of your own, try out one of the 50 Pick-Up Lines So Bad They Might Just Work! 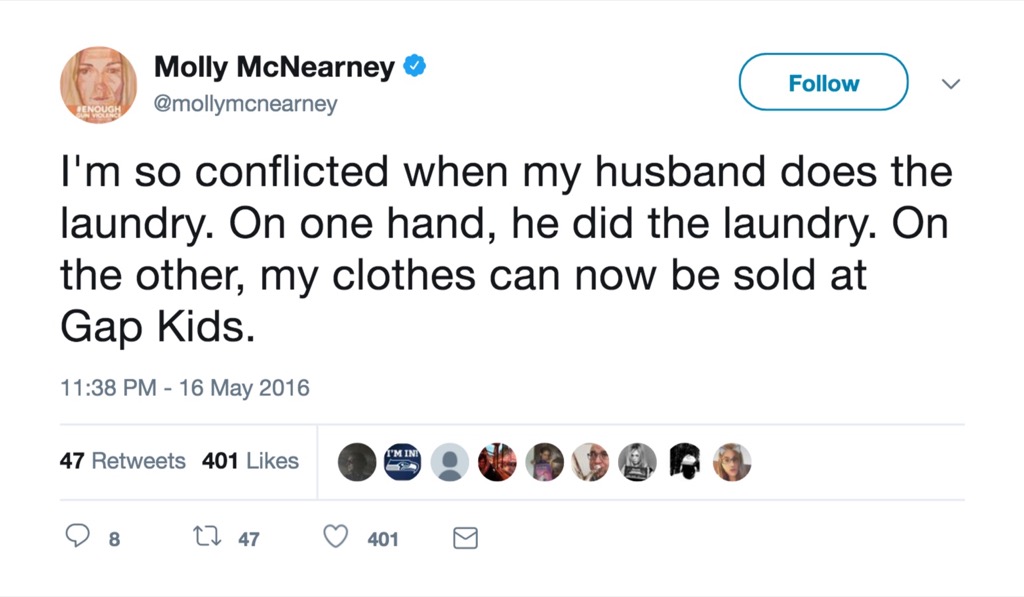 Jimmy Kimmel Live! head writer Molly McNearney likes her husband, Jimmy Kimmel, to help, but knows his limitations. And when you want to really crack up, take a peek at the 30 Worst Madame Tussauds Celebrity Wax Figures Ever! 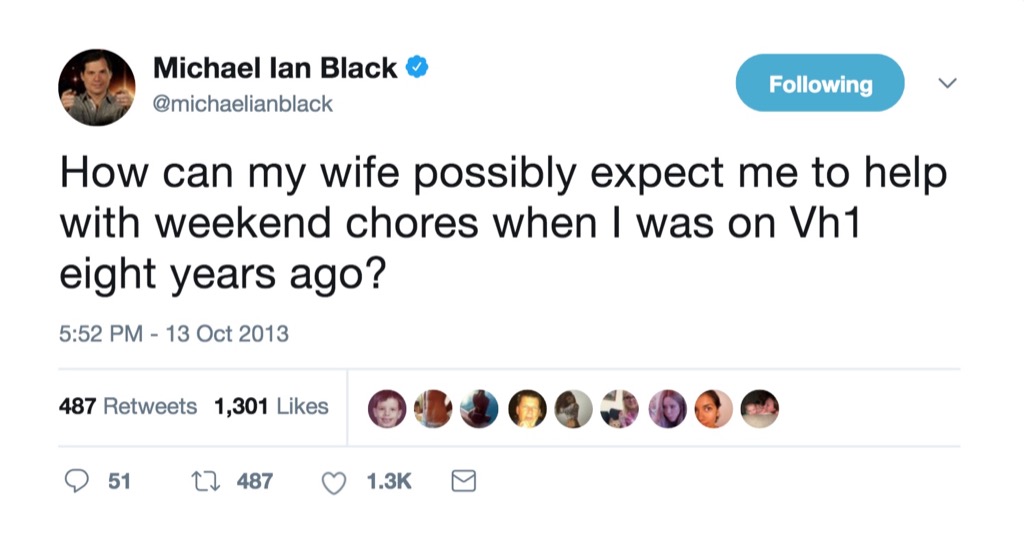 Michael Ian Black was really big in the 2000s, so how is he supposed to help his wife vacuum? And for more silly humor, check out the 75 Jokes So Bad They're Actually Funny!

5
On Hating Each Other 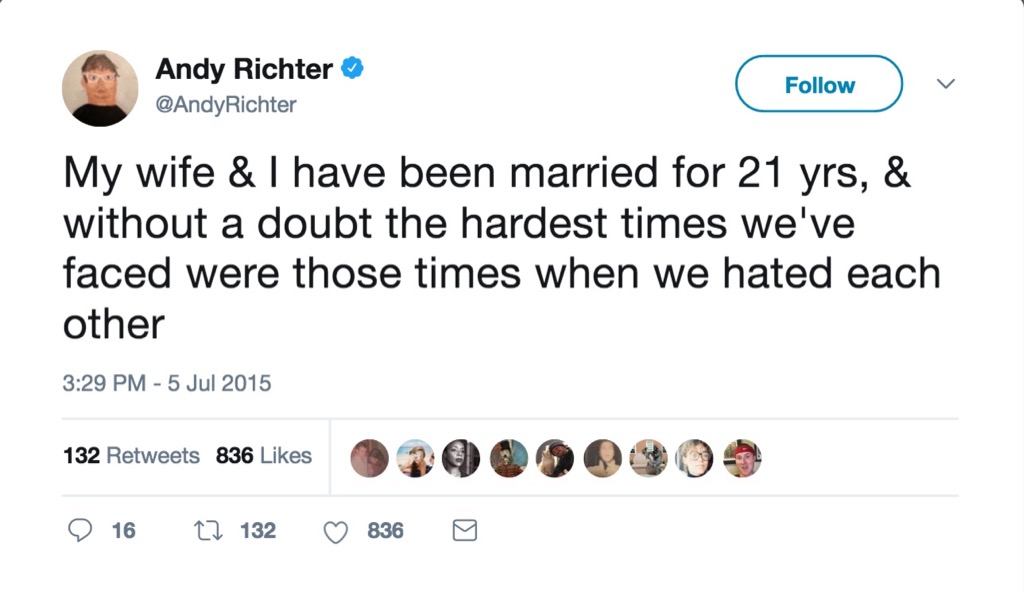 Andy Richter gets real about what really comes between couples: hatred, in his case. And if you think that's hilarious, just wait until you read the 30 Funniest Pieces of Celebrity Parenting Advice!

6
On Making Time for Each Other 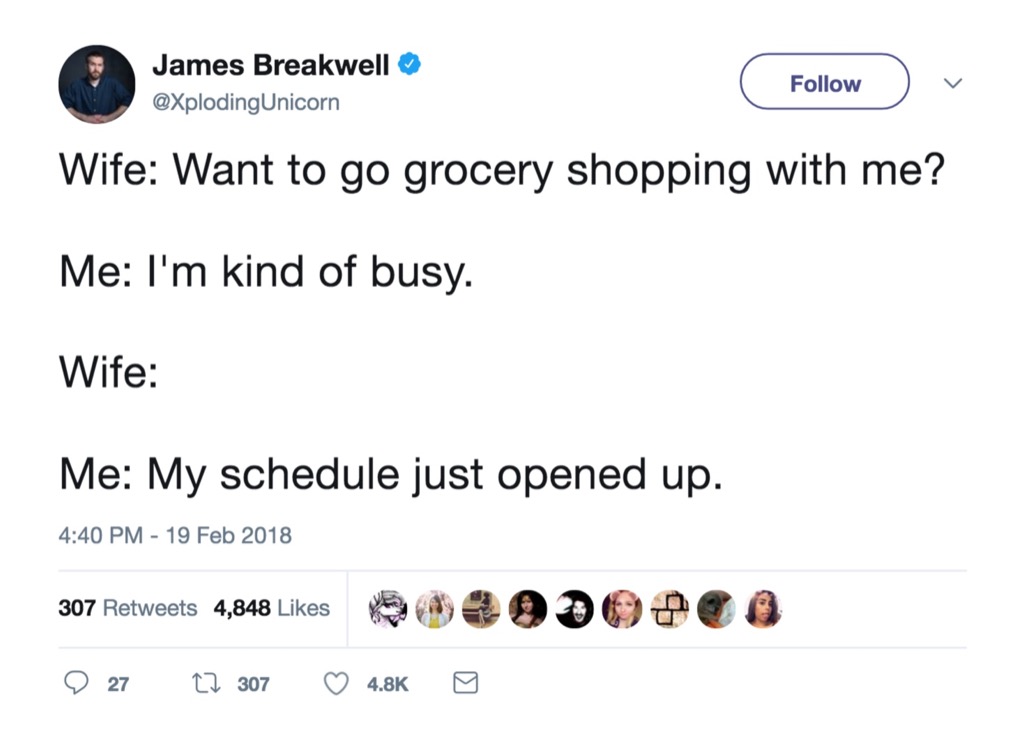 Humorist James Breakwell knows when it's important to free up his schedule. 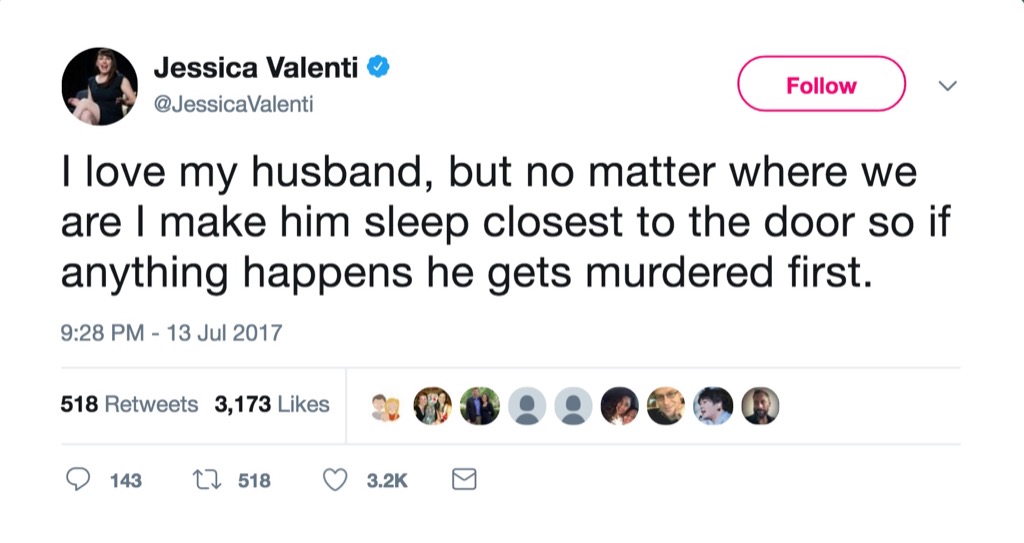 Writer Jessica Valenti's love for her husband doesn't mean she won't use him as a human shield.

8
On Protecting Each Other 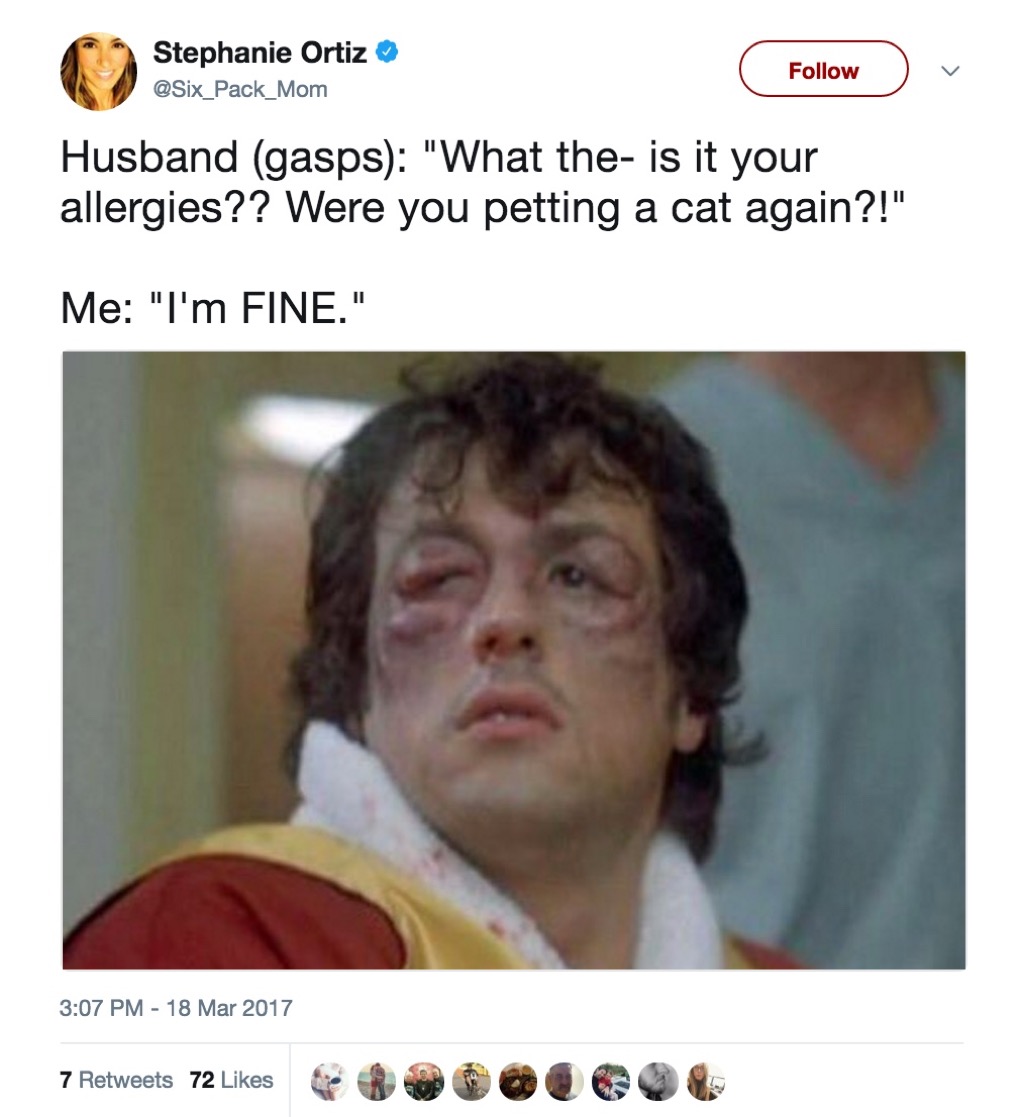 Stephanie Ortiz, AKA the Six Pack Mom, isn't going to let her husband—or anaphylaxis—stand in the way of her doing what she wants. 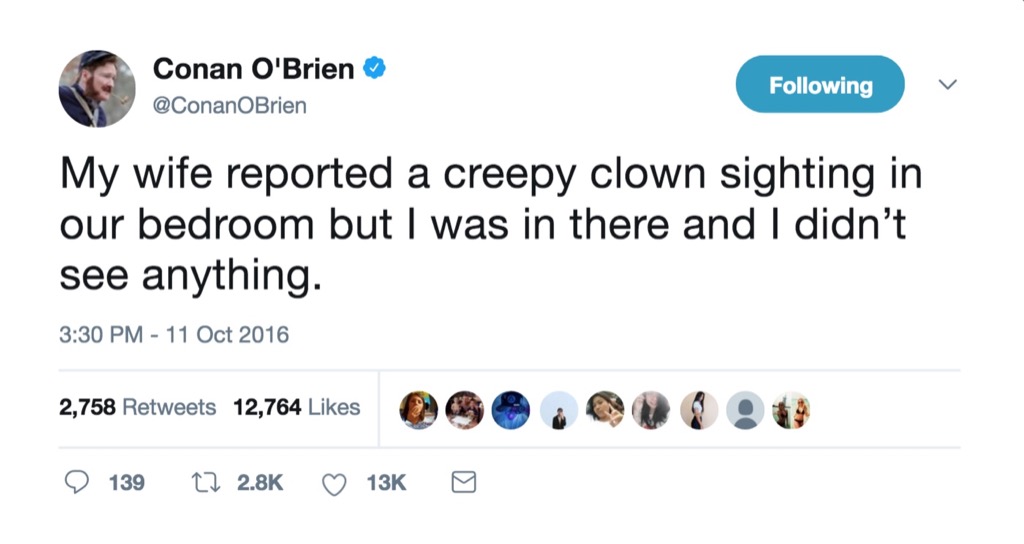 You'd be afraid if there was a ginger giant lurking around your house, too.

10
On Taking Each Other's Names 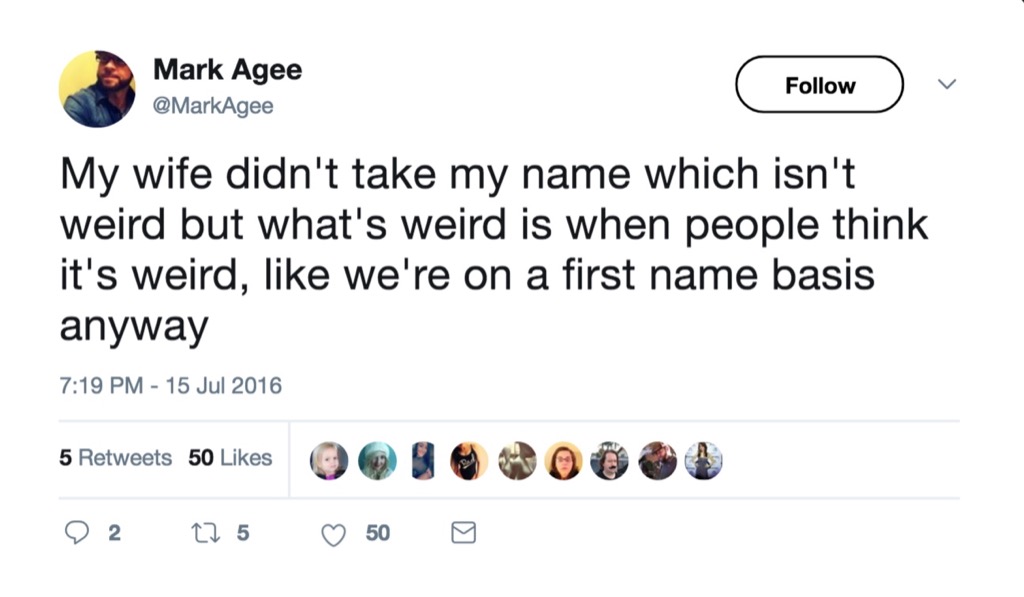 Mark Agee doesn't need his wife to share his last name, thanks to those convenient first names people have these days.ae0fcc31ae342fd3a1346ebb1f342fcb

11
On Being Good Neighbors 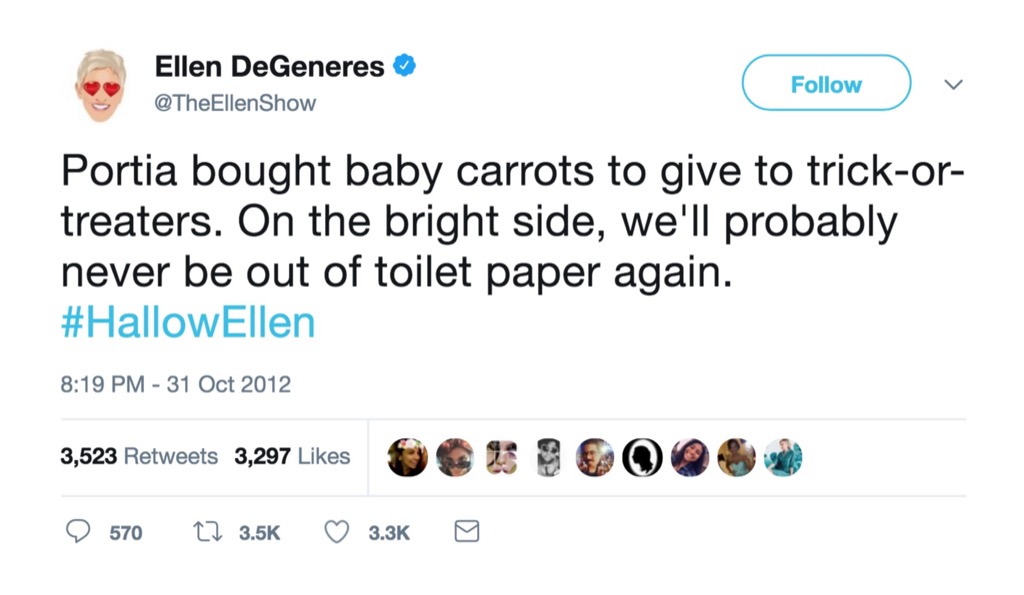 Ellen DeGeneres loves her wife, even if she knows that her neighbors never will. 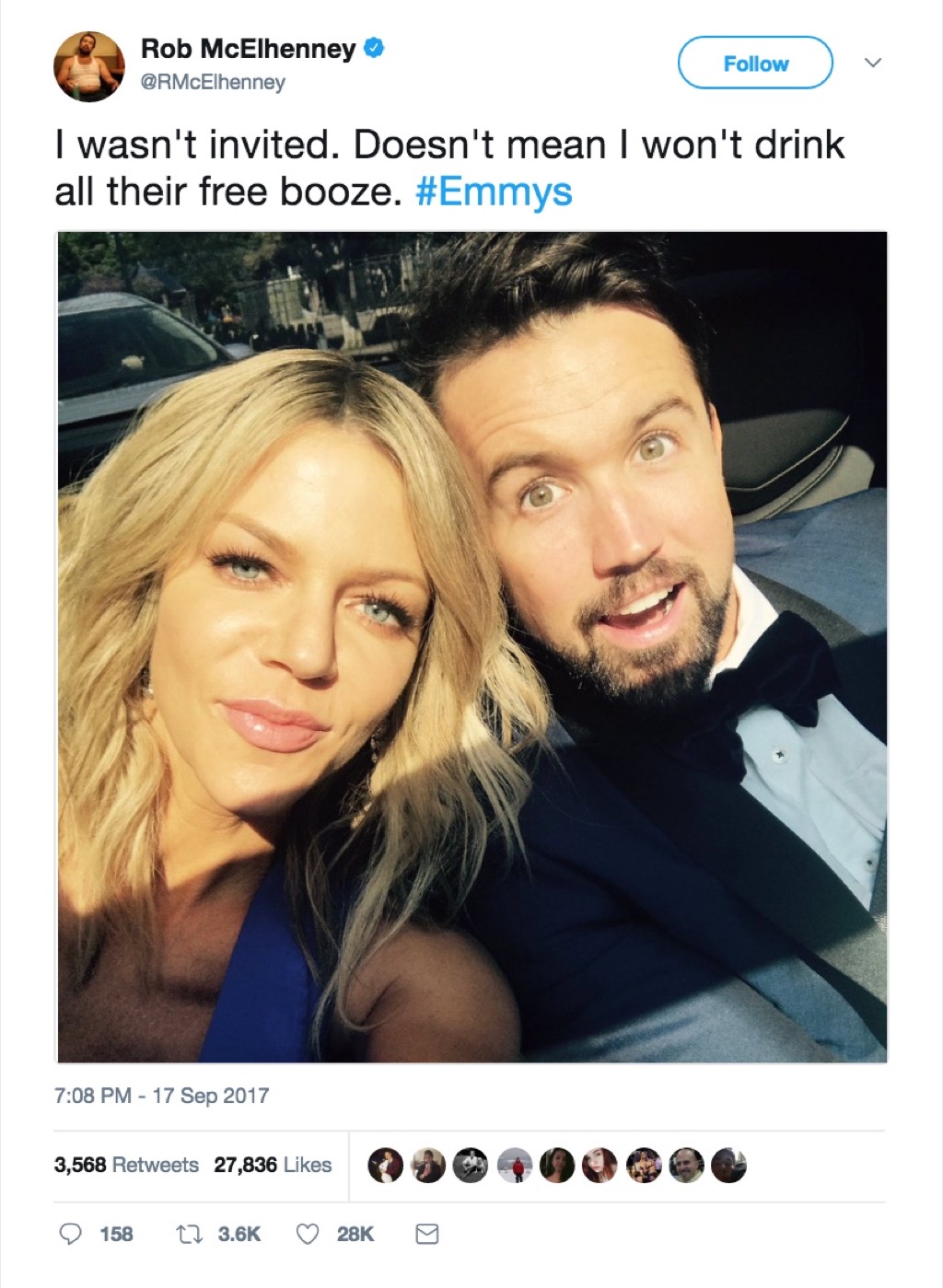 No invite? No problem, according to It's Always Sunny star Rob McElhenney, who will always attend events to support his wife, Kaitlin Olson—well, if there's free booze, that is.

13
On Surprising One Another 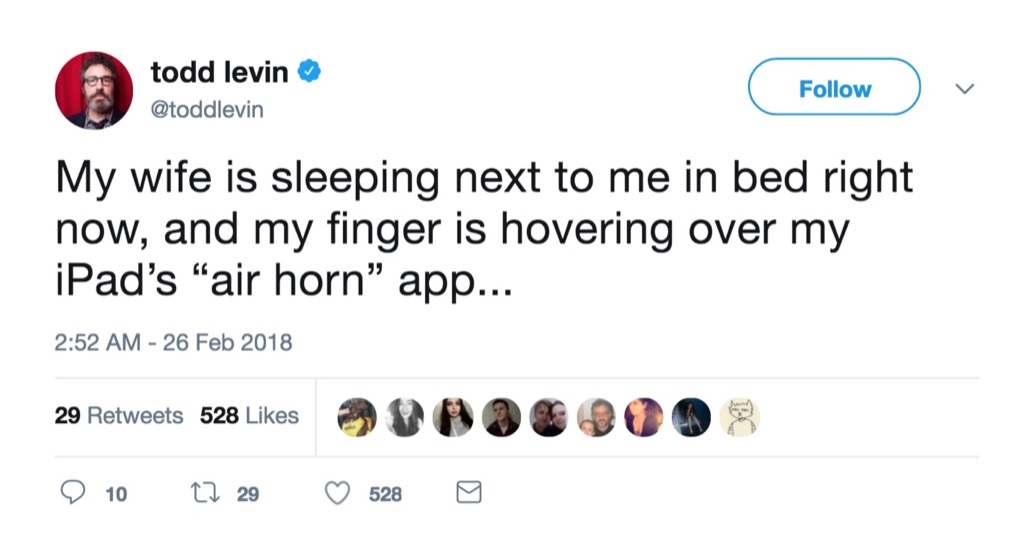 TV writer Todd Levin knows what it takes to keep the magic alive. 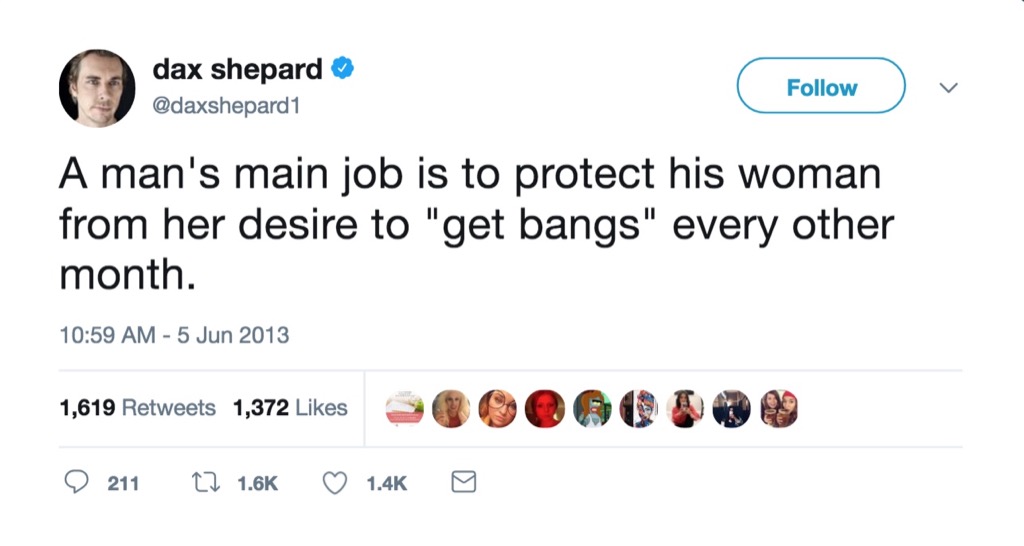 15
On Growing Old Together 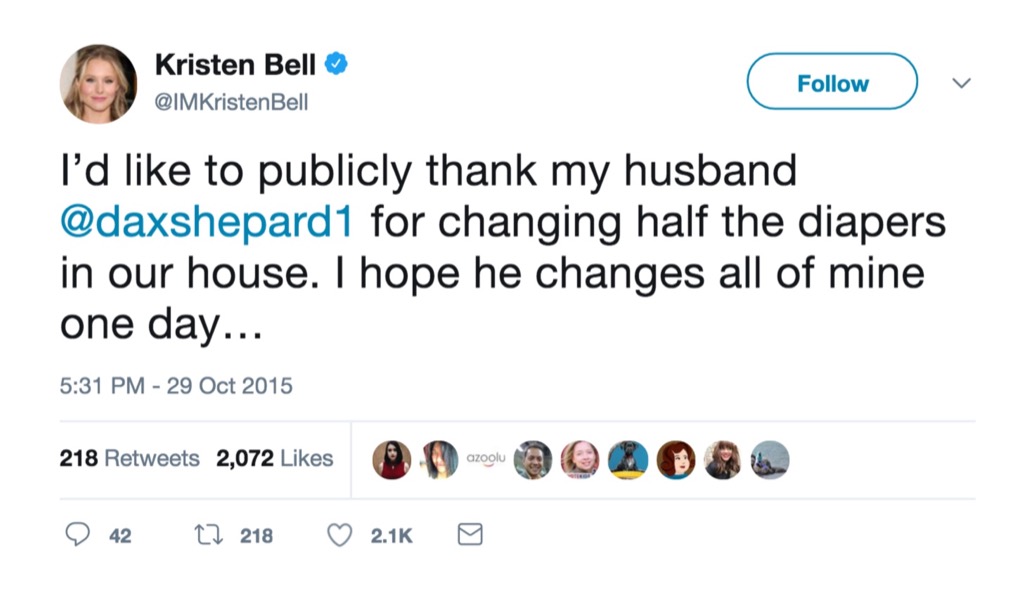 Kristen Bell has some high hopes for her golden years with husband Dax Shepard.

16
On Having a Second Set of Eyes 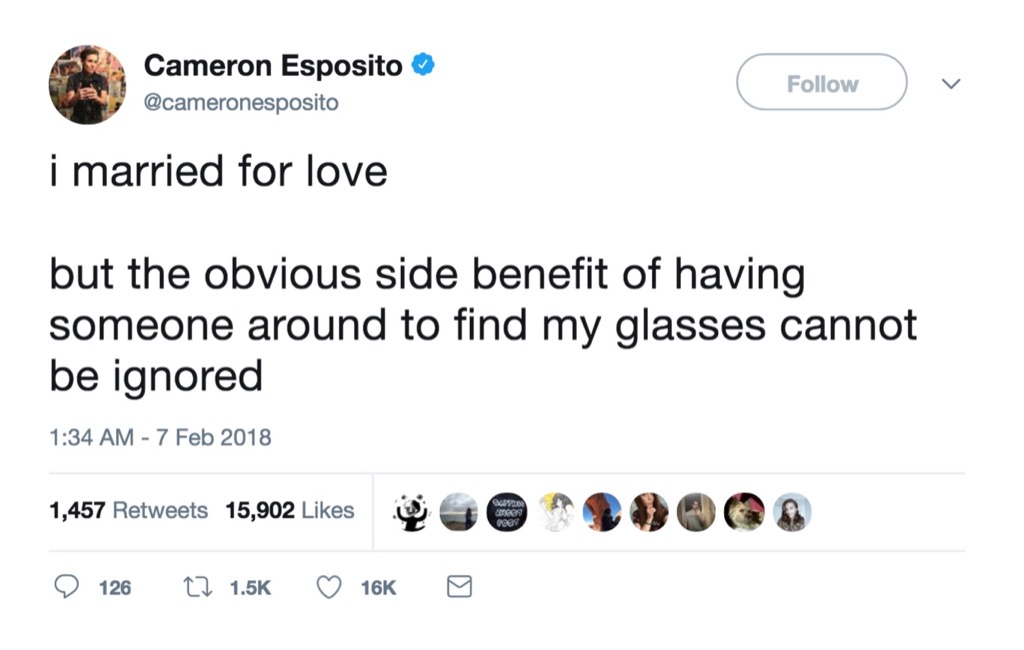 Being in love is great, but having someone find stuff for you is really great, according to comedian Cameron Esposito. 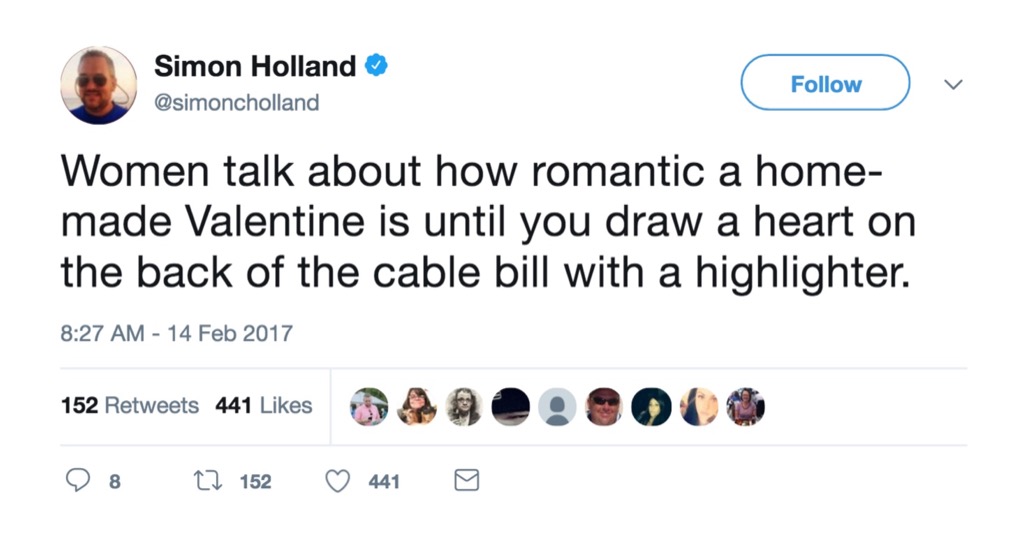 Humorist Simon Holland doesn't quite get his wife's rules about "cute" versus "lazy" gifts. 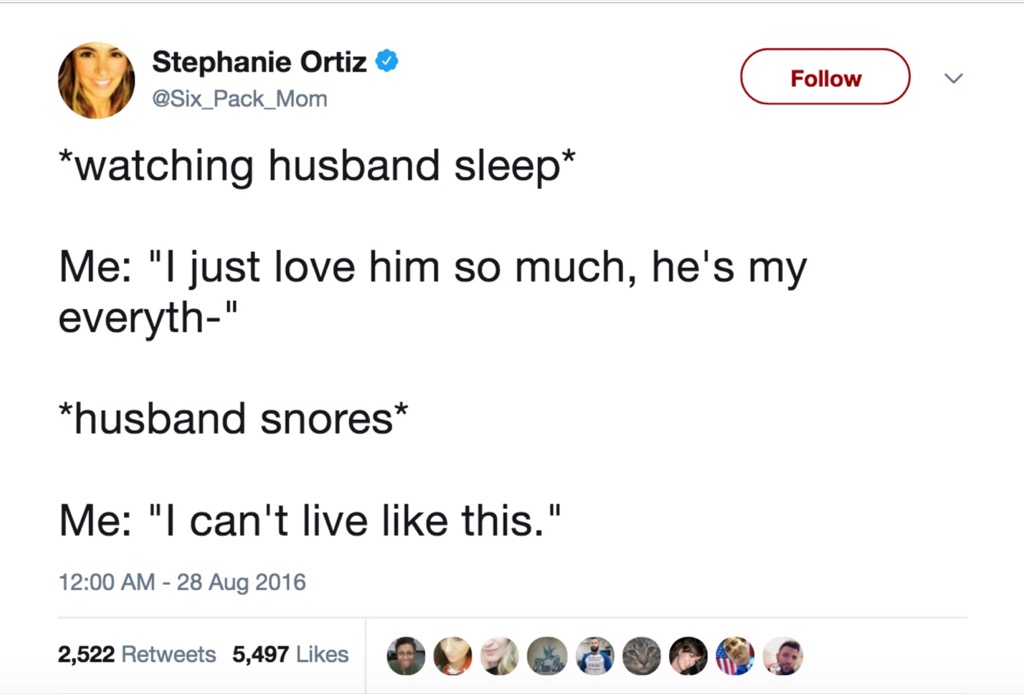 Stephanie Ortiz' love for her husband knows no bounds. Well, except for the one. 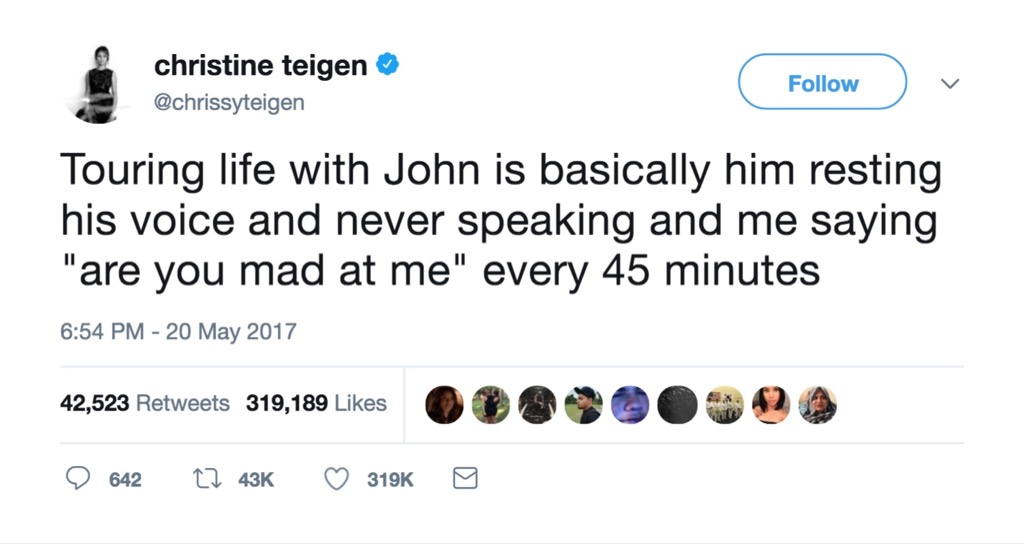 20
On Making an Effort 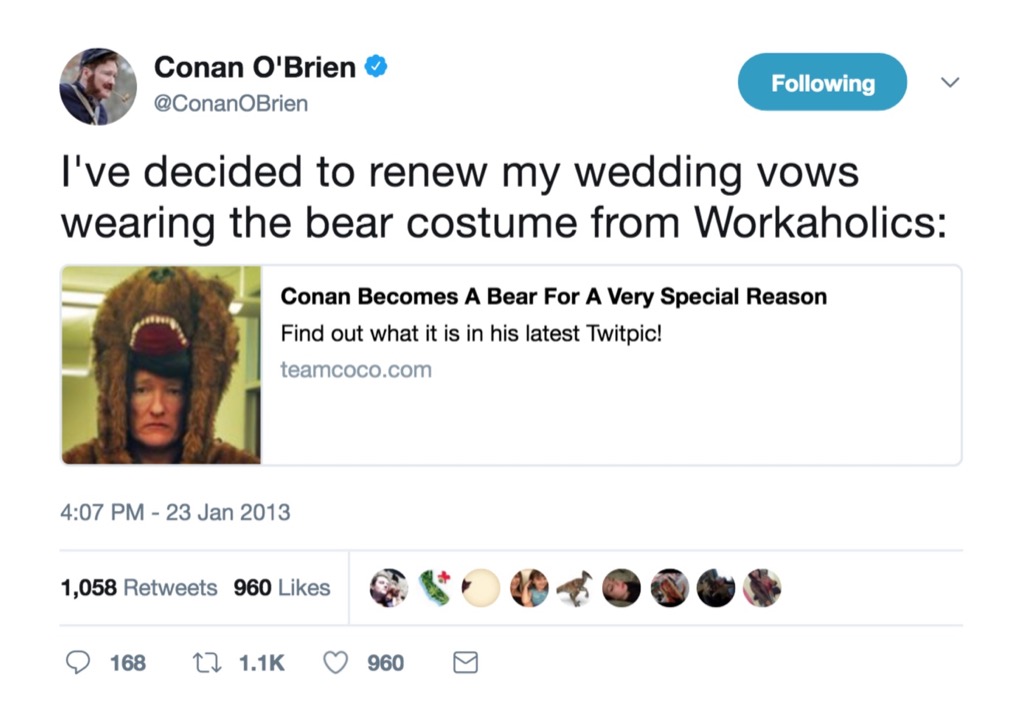 Conan O'Brien knows that dressing up goes a long way when it comes to keeping your marriage hot. 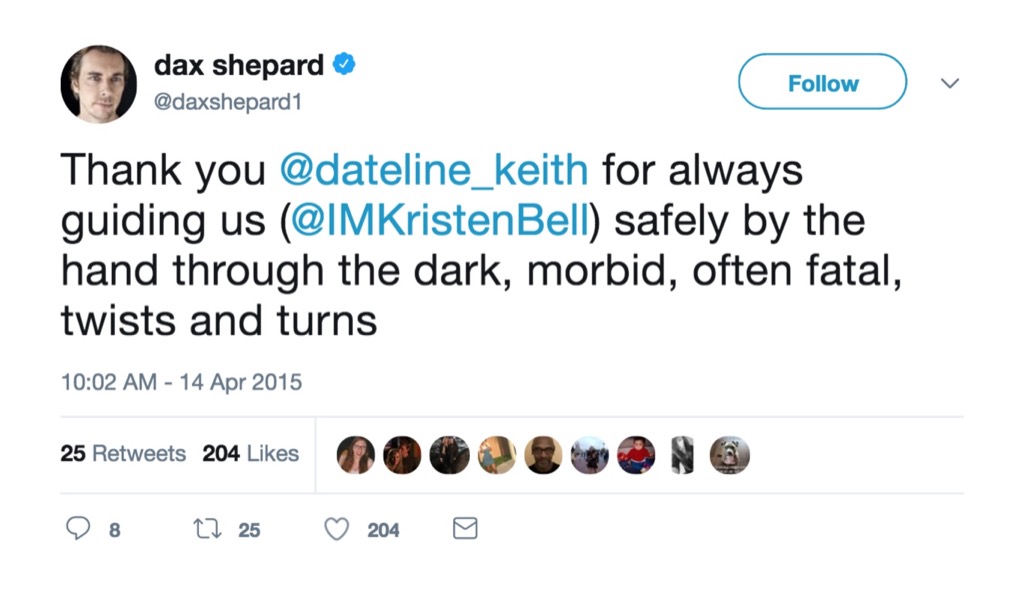 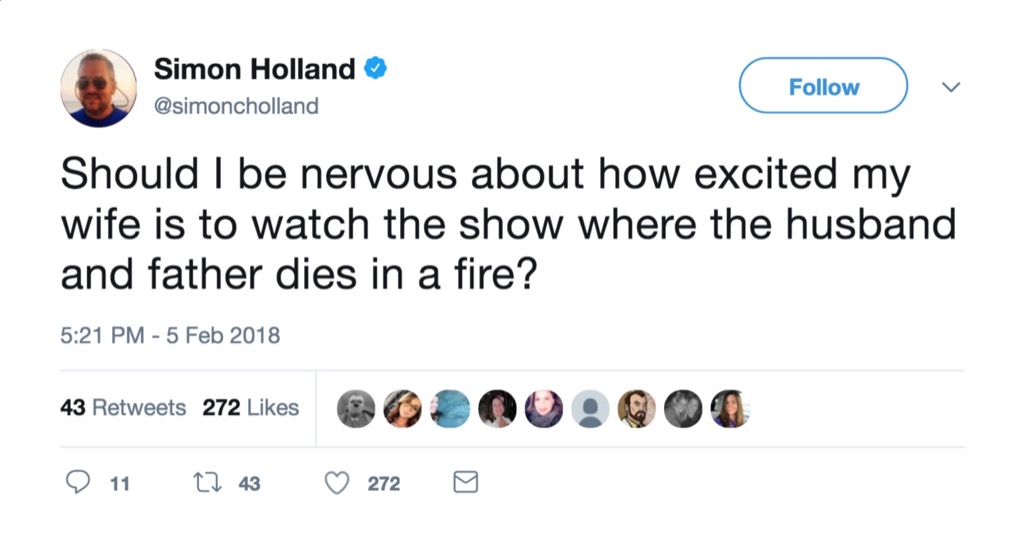 Rob Delaney isn't about to let you make him feel bad about his ankle-length skinny jeans. 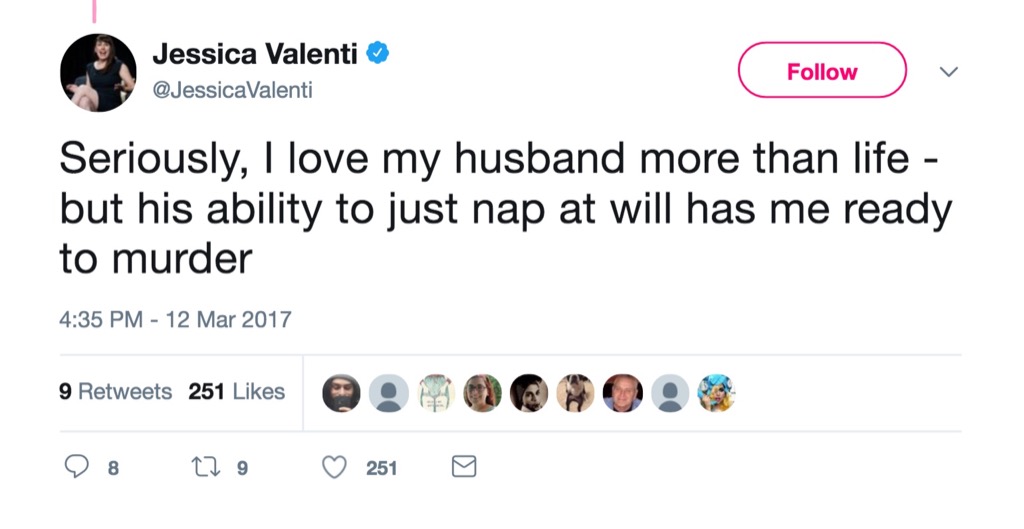 Jessica Valenti's husband's ability to nap whenever he feels like it will not stand. 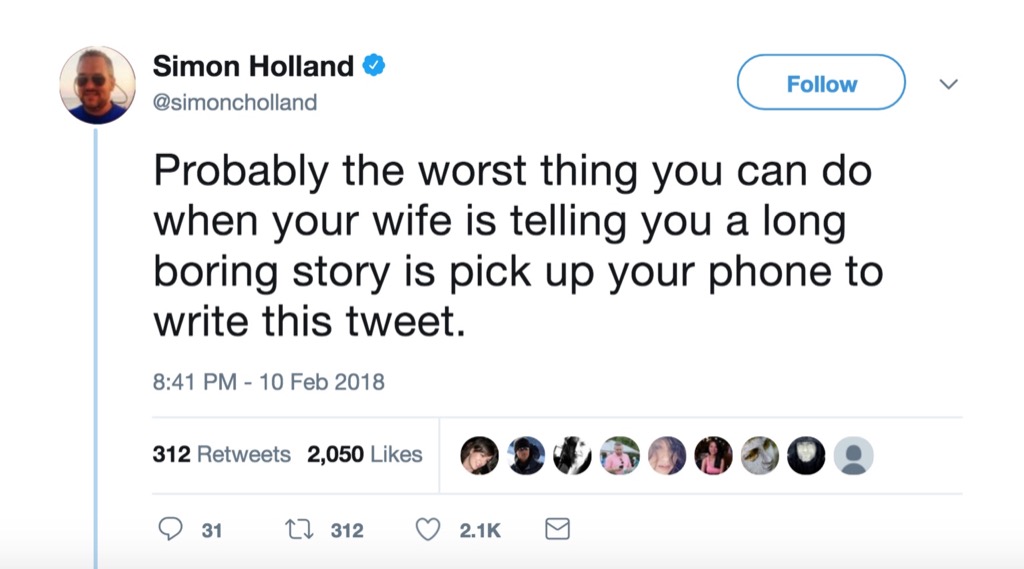 What's more flattering than having your relationship shared with the world? Oh right, undivided attention. 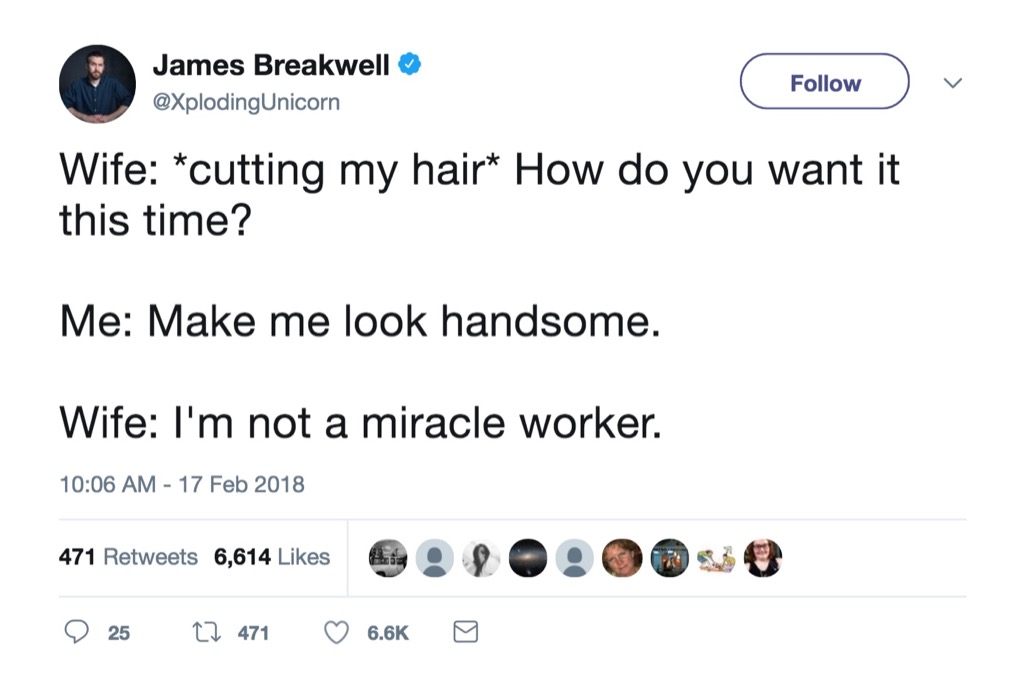 James Breakwell's wife wasn't cutting her husband down a notch while giving him a trim. 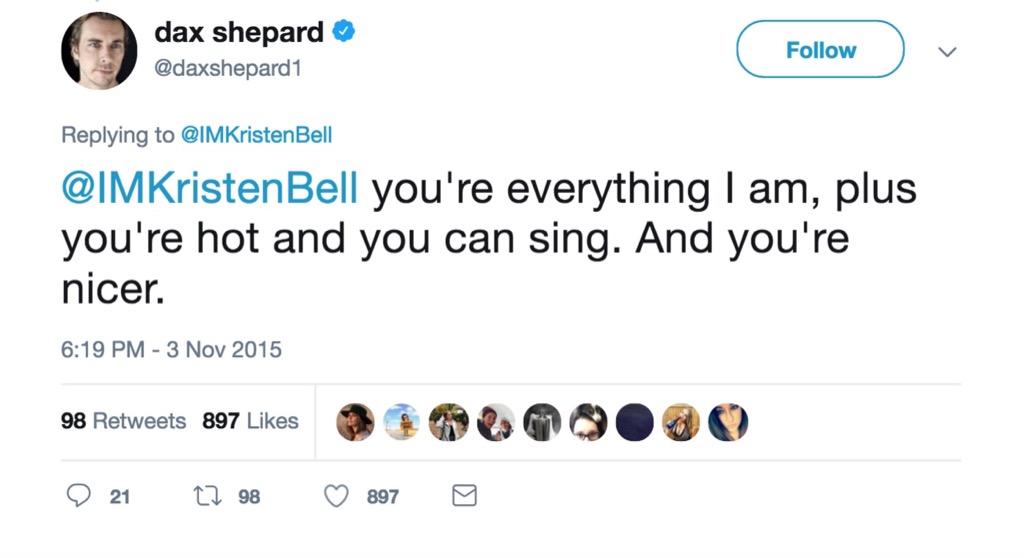 Dax Shepard readily admits that his better half really is just all-around better than him. 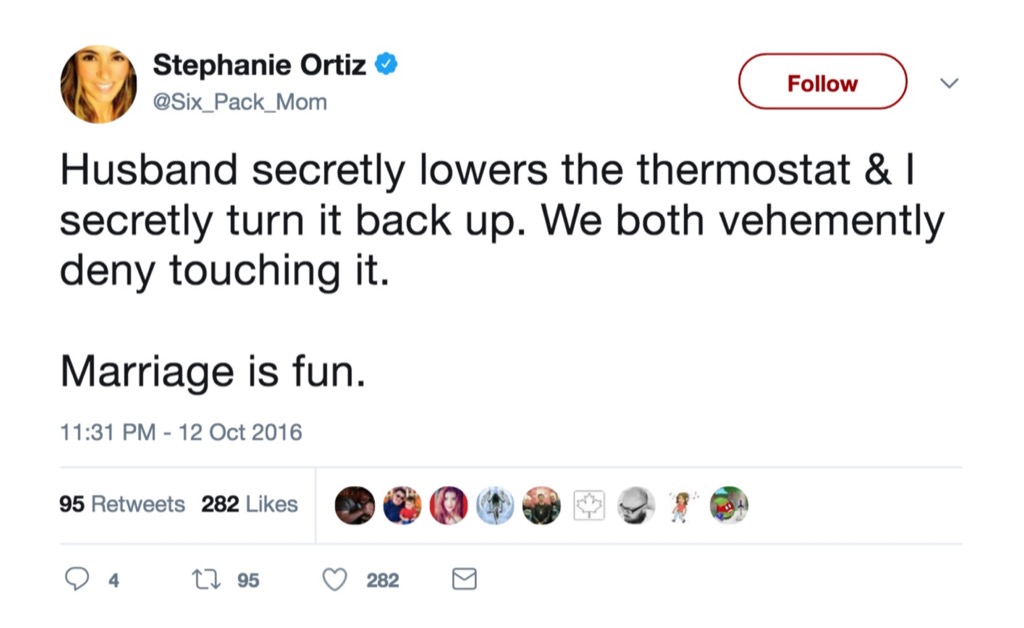 It's for the weak, clearly.

Jim Gaffigan isn't ashamed to admit the aesthetic disparity between him and his bride. 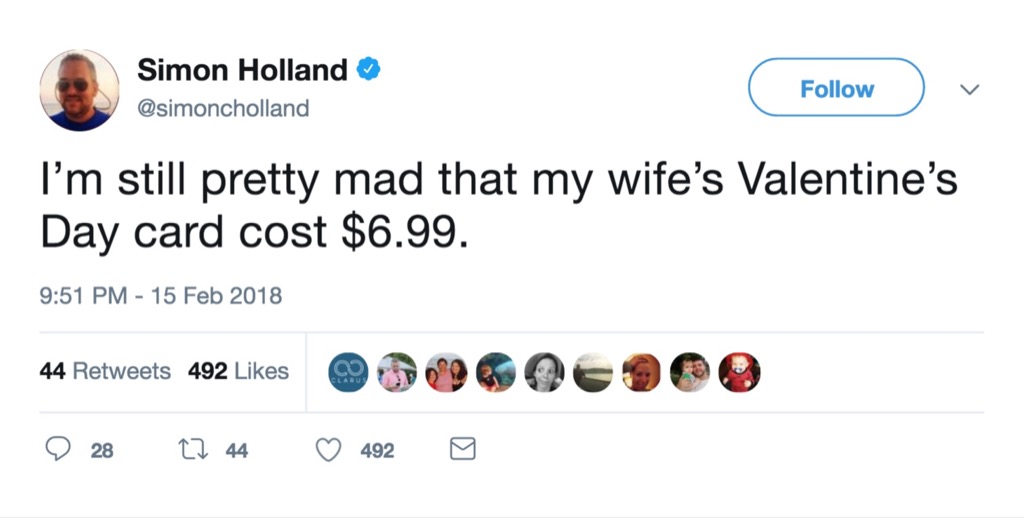 Sharing a mortgage, credit cards, utility bills? Fine. A $7 card? Only if you're out of your mind.

Sarah Crow
Sarah Crow is a senior editor at Eat This, Not That!, where she focuses on celebrity news and health coverage. Read more
Filed Under
Funny • Marriage
Read This Next
Latest News
Read This Next