The experts say that this astrological sign is cheaper than the others.

Let's be real: Some people are a little more conservative with their finances than others. Perhaps they're a bit more frugal out of necessity, or they prefer not to spend money on others. But have you ever wondered if there's a reason why someone is less likely to grab the bill? It's possible that their banking habits might just be explained by the stars. We talked to astrologers to find out which zodiac sign is most likely to be the cheapest. Read on for the six biggest offenders, from a little cheap to the stingiest of all.

RELATED: The Zodiac Sign That Is Worst With Money, According to Astrologers. 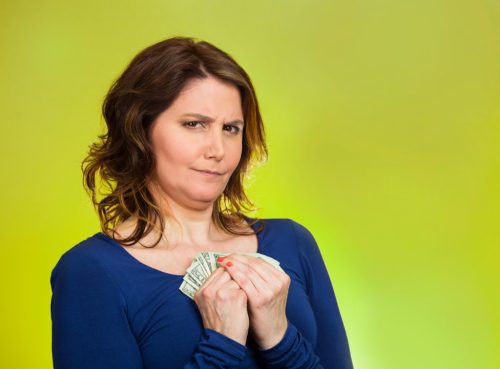 Cancers are known for their homebody nature. Because of that, oftentimes this sign would rather curl up with a good book than go out on the town and spend money on martinis.

Hint astrologer and bestselling astrology author Marion Williamson agrees. "Moon-ruled, nurturing Cancers are conservative and shrewd providers who look after their own first," she says. This sign is also famous for its sentimentality. "Protective of their privacy and home life, Cancer can be a hoarder, attaching sentimental value to empty crisp packets and old train tickets," Williamson adds. An inability to part with items can translate to Cancers wanting to keep their money in their wallets.

While you might think that Capricorns would want to spend money because they appreciate life's finer things, it can be just the opposite. "The ambitious, business-minded Capricorn has a serious attitude towards money," says Williamson. "They'll live on fish fingers for years if it means saving for a Ferrari, or paying off their mortgage."

Johanna, an astrologer at Ministry of Numerology, agrees. "Capricorns are cautious spenders. They enjoy seeing their money grow and genuinely appreciate saving for the future." However, if they have to give something away to their coworkers or friends, "they will go out of their way to be as inexpensive as possible," she adds.

Williamson warns that many times Pisces don't have money to burn simply since they've probably already spent it on partying—or sometimes good causes! She says, "Humanitarian, emotional Pisces rarely have money to spend because they've either blown it all on an insane night out or put it all on a losing horse." Because this compassionate sign often donates to charities, they can sometimes be found overdrafting their accounts, leading to occasional cheap behavior.

Williamson explains that while Virgos would never call themselves cheap, they do fit the bill. She describes the sometimes uptight sign as "frugal and modest," with a tendency to avoid any type of extravagant behavior. They can also be super focused on their finances, leaning toward keeping spreadsheets and counting every penny.ae0fcc31ae342fd3a1346ebb1f342fcb

Emily Newman, a psychic reader and astrologer at The Best of Psychic Readers, agrees. "Virgos are unique personalities, the wealthiest people, and perfectionists. They never have enough money to accommodate outsiders." Beware: If you're friends with a Virgo, they could be judging your own spending habits.

Scorpios are notoriously secretive, which can lead to them keeping their finances private, even from close friends and family. Newman says, "Scorpios may spend money on themselves, but because they prefer to travel alone, they dislike trips with friends when they must spend money on others." While they can pay for themselves, they'd rather just do so for necessities so that they can save money for the future.

Taurus is the number one sign to watch out for if you want to split the bill, because it's more than likely you'll wind up paying. "Taurus is mistrustful of anyone who persuades them to part with their cash, and probably still remembers you owe them $10 from three years ago," Williamson says. She warns that they're not the best dinner guests: If you "invite them to dinner at a new restaurant they'll order the most indulgent item, but they might mysteriously vanish when it's time for the bill."

And Taureans definitely love to be treated. They are known for their likable personalities, which is why others desire to be around them. But this sign can take advantage of this popularity. "On a date, they'd want to spend time with individuals who buy them drinks or meals or give them a gift," Johanna says.

RELATED: The Zodiac Sign Best at Lying, According to an Astrologer.