These quips are as silly as they are scathing.

Whether you're a hardcore HGTV binger or a die-hard TLC fan, one thing is for certain: home design shows have, somewhat surprisingly, emerged as one of the most entertaining and engrossing genres on television in the past decade. However, for every episode that brings a tear to our eyes when an adorable family finally sees their finished dream home, there's one that leaves us screaming, "If you have six dogs and three kids, why are you even looking at tiny houses in the first place?"

However, it's clear that we're not alone in our emotional investment in these home design shows. Around the world, millions of fans are tuning in, getting their hearts broken when someone picks the wrong kind of granite, and cracking some pretty hilarious jokes about the whole experience. We've compiled the 30 hilarious jokes about home design shows, every one more relatable than the last. And for hilarious TV moments, check out The 30 Funniest Sitcom Jokes of All Time. 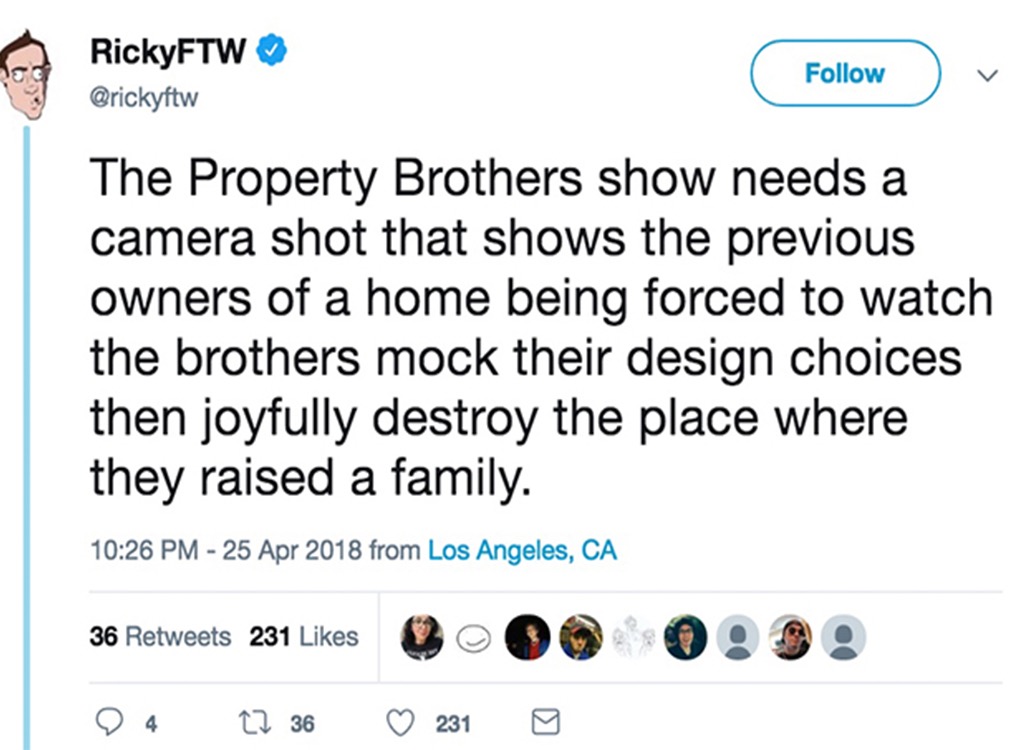 The only thing better than watching Property Brothers? Watching the psychic turmoil of the people who no longer live in the houses they so mercilessly mock and rip apart. And if you think that's funny, don't miss these 75 Jokes That Are So Bad They're Actually Funny. 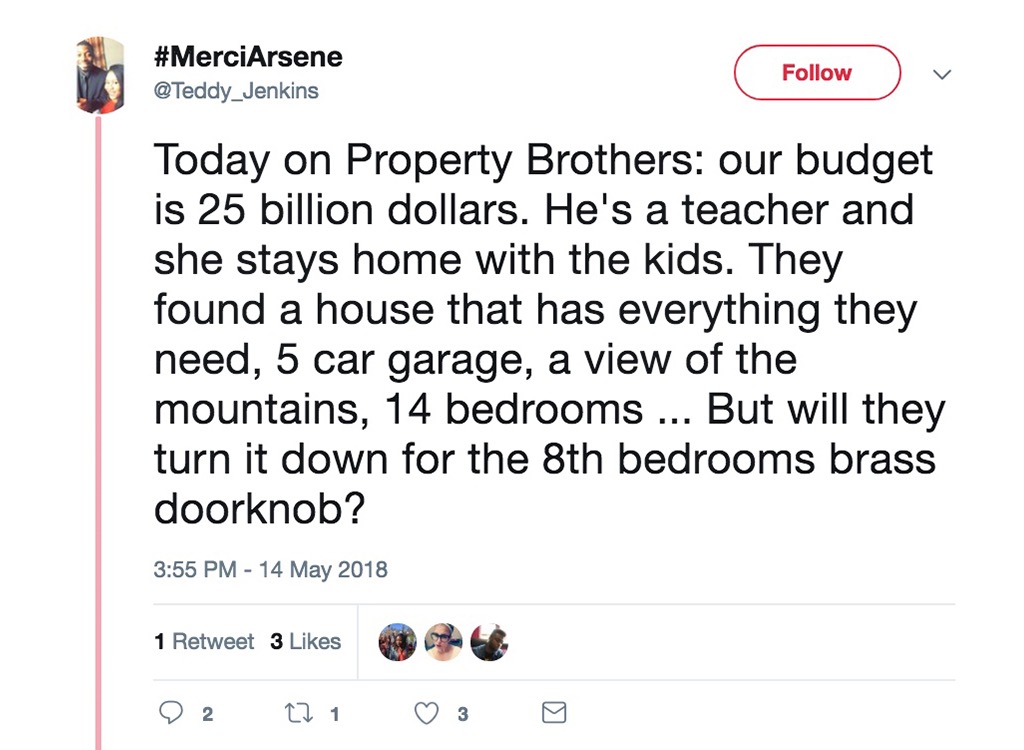 Sure, the design choices on many home design shows are highly questionable. However, even more bizarre is the seemingly never-ending supply of people with made-up jobs and Oprah-like budgets. And for more opportunities to crack up, check out the 50 Jokes from Children That Are Crazy Funny. 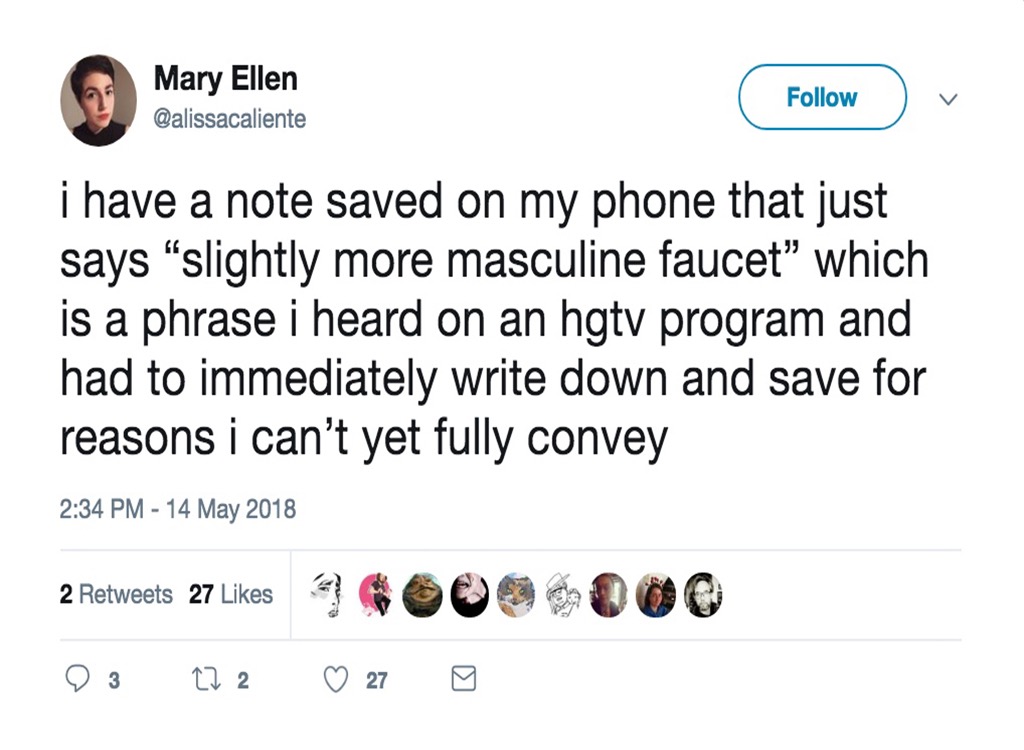 Barring some seriously offensive design elements, it's hard to picture what makes the spout under which you wash your hands "too girly." 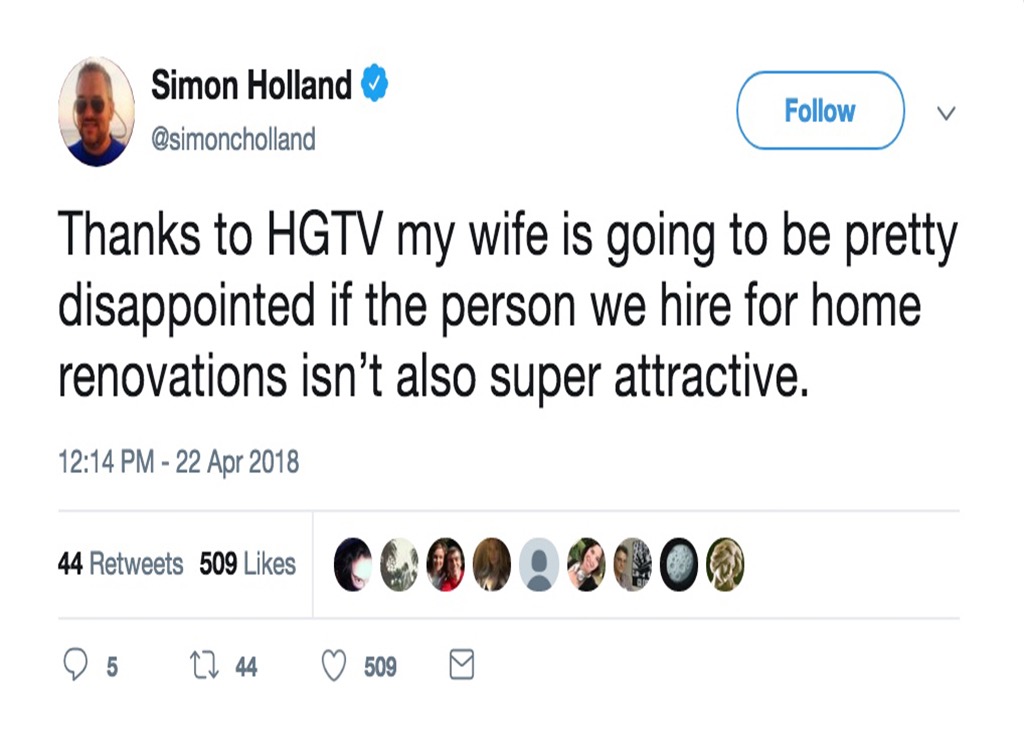 From the Property Brothers to Chip and Joanna Gaines, pretty much every other home design show host is startlingly good-looking. Sadly, the people who come to do construction on the average Joe's house are more likely to be guys in precariously-saggy cargo pants than these godlike creatures. 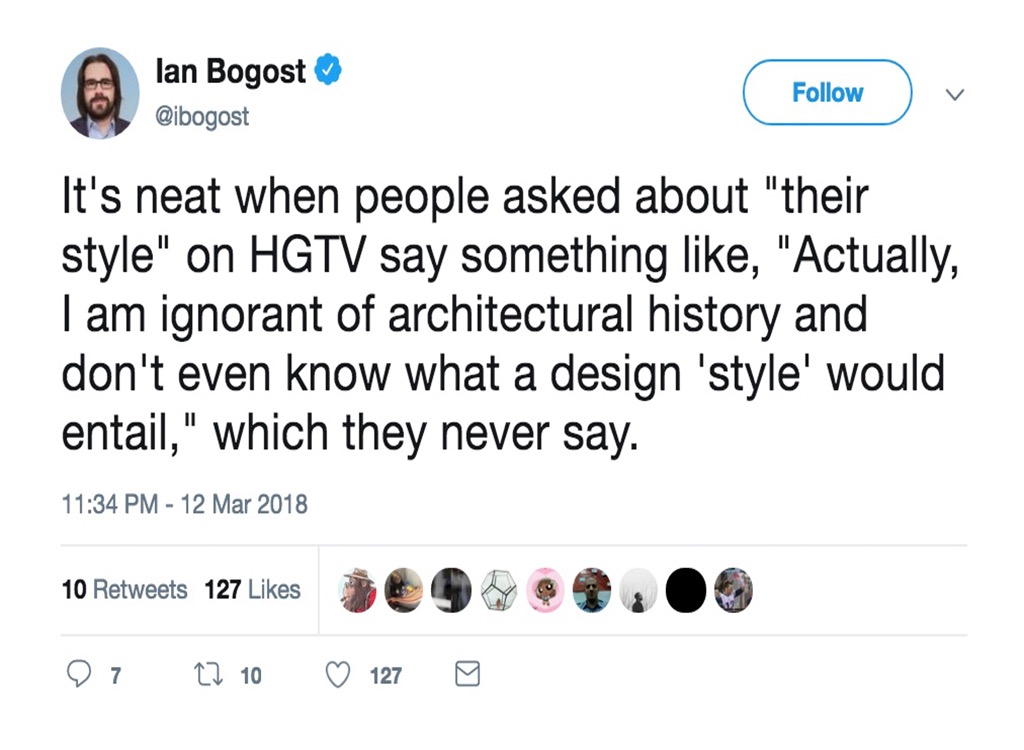 What you will hear a lot on home design shows: the word "shiplap." What you won't hear: anyone admitting that they don't actually know what a Rococo-inspired bohemian settee is. 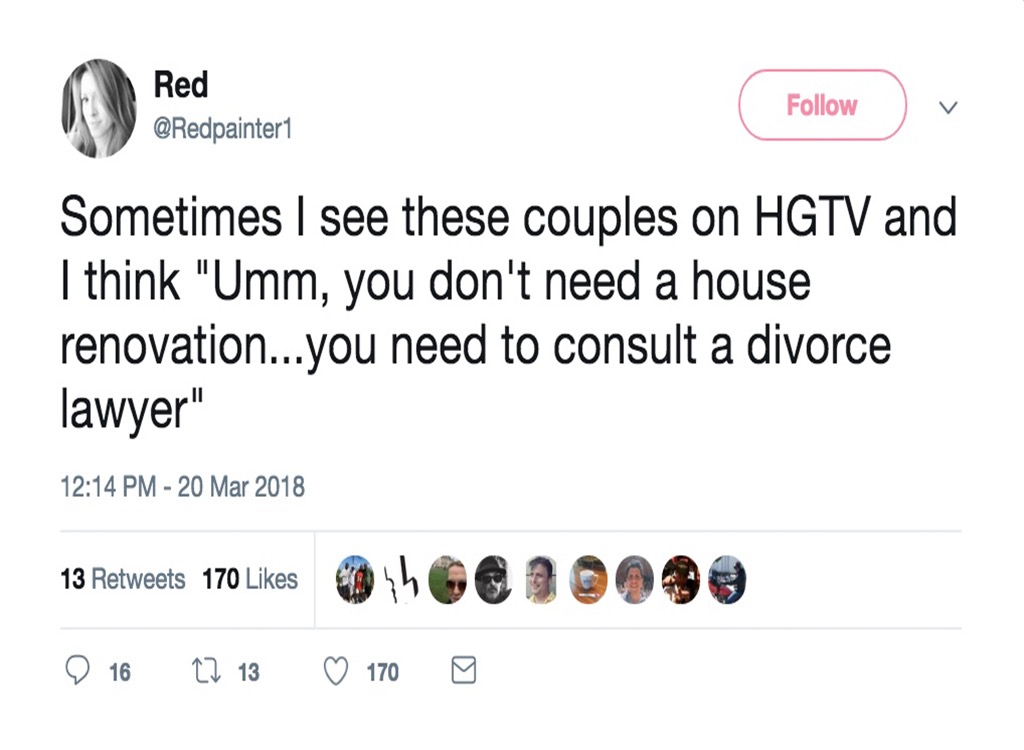 She has a point: if you can't agree with your spouse on the paint color for an accent wall in your kitchen, how are you supposed to agree to spoon-feed said person 50 years from now? And for more side-splitting humor from the tube, check out The 30 Funniest Reality Show Moments of All Time.

7
On Opening Up the Space 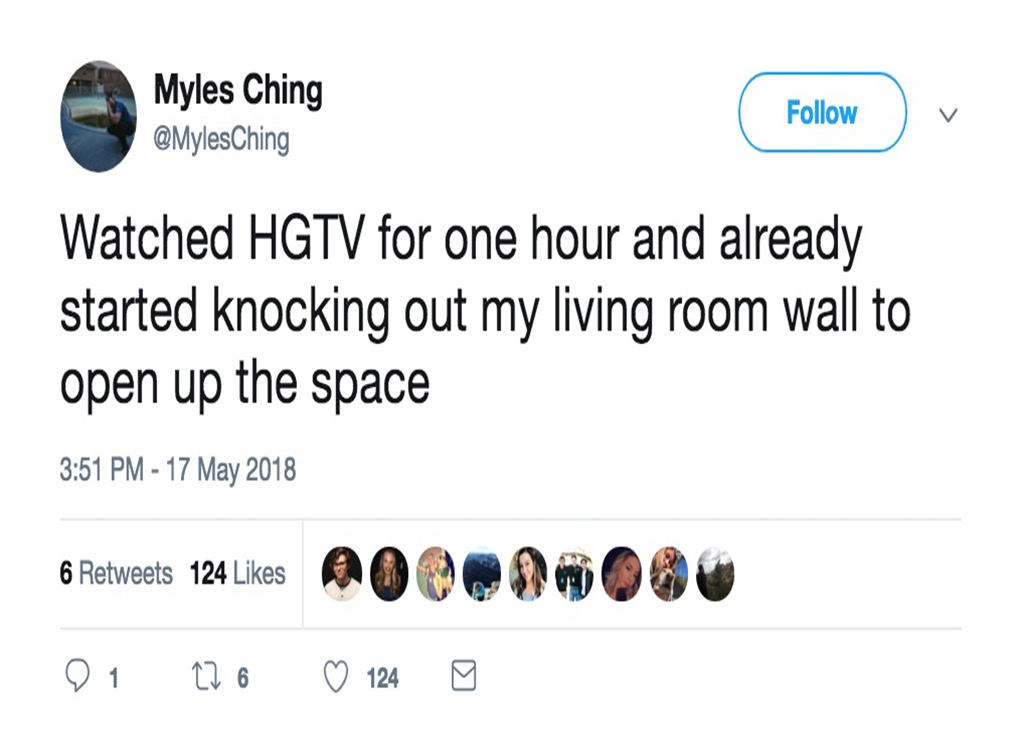 There are no rules when it comes to personal taste in home design. Except on HGTV, where you'll have to prove your staunch opposition to walls before they'll let you on a show. 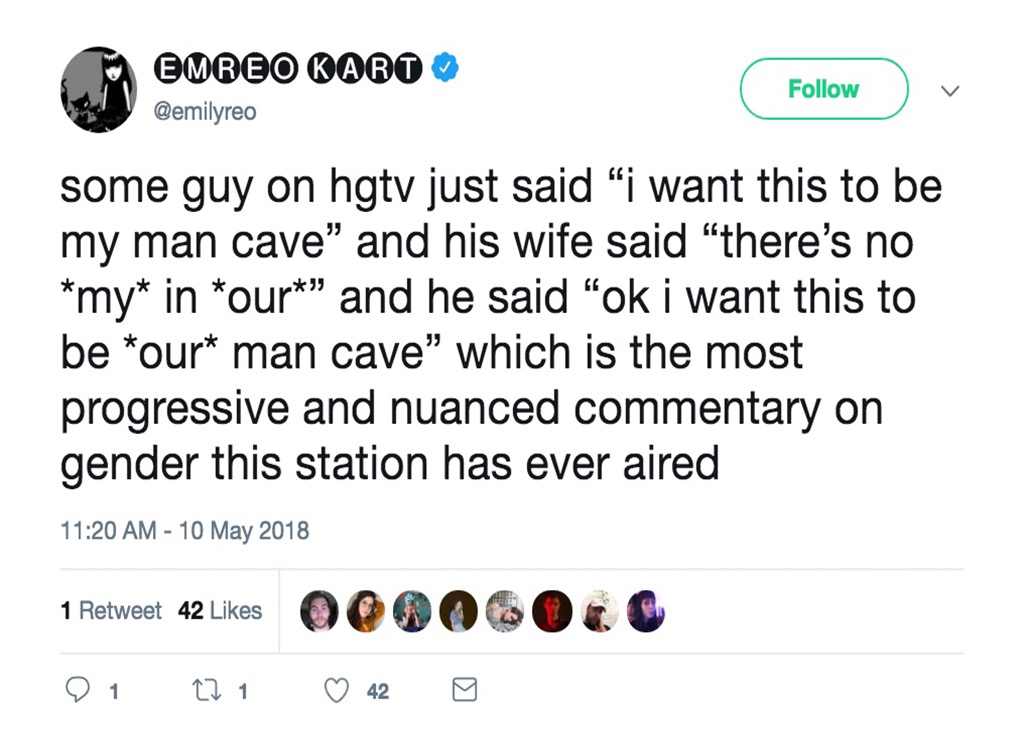 Just because a room was specifically designed to watch the NFL Sunday Package in and has a sign that reads, "No Shoes, No Shirt, No Problem" doesn't mean it can't be a gender-neutral space. For more hilarious jokes, discover these 50 Knock Knock Jokes Guaranteed to Crack You Up. 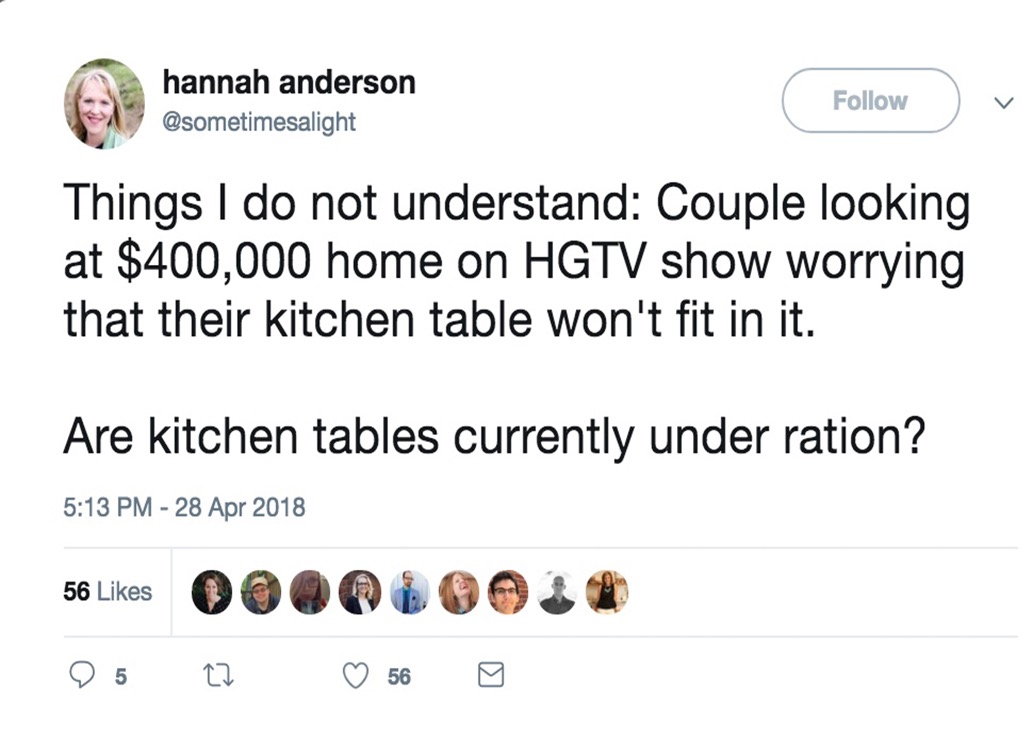 A few things are universally true of participants on home design shows. They're usually operating with a surprising budget, but more importantly, they seem virtually incapable of figuring out how to fix minor problems, like paint color or buying new furniture. And for more silly humor, check out these 50 Dad Jokes So Bad They're Actually Hilarious. 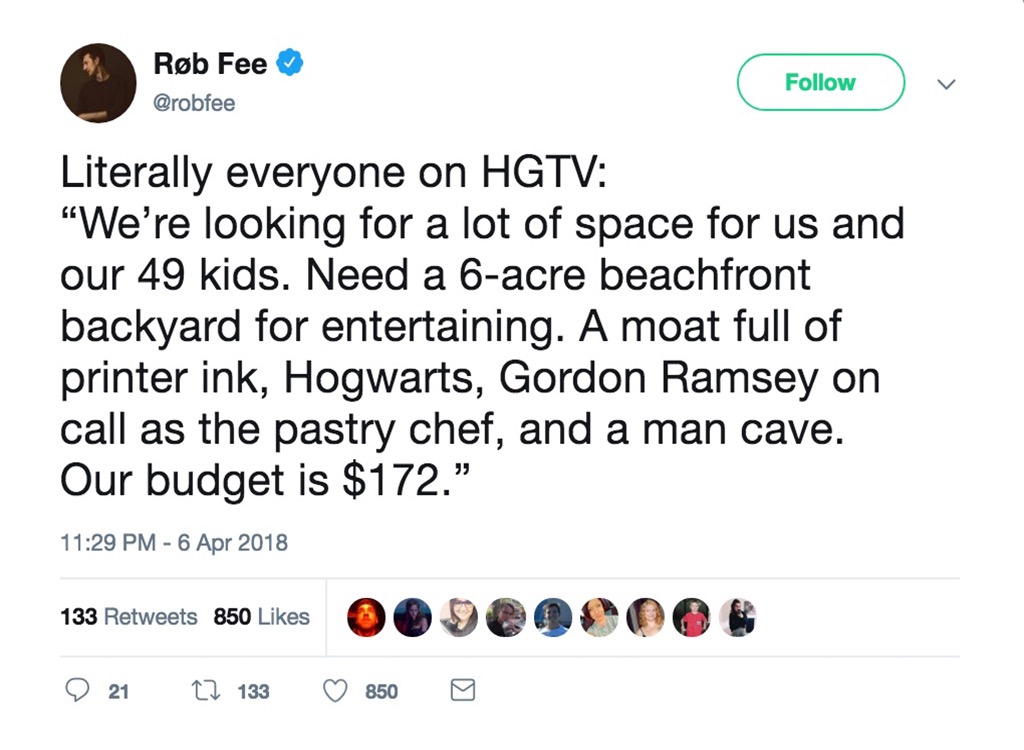 However, on the other side of the coin are the design show guests who won't settle for less than the best, biggest home that money can buy. The only problem? They've got about a piggy bank full of change to buy that dream home with. And for more belly laughs, check out the 30 Funniest Memes of All Time. 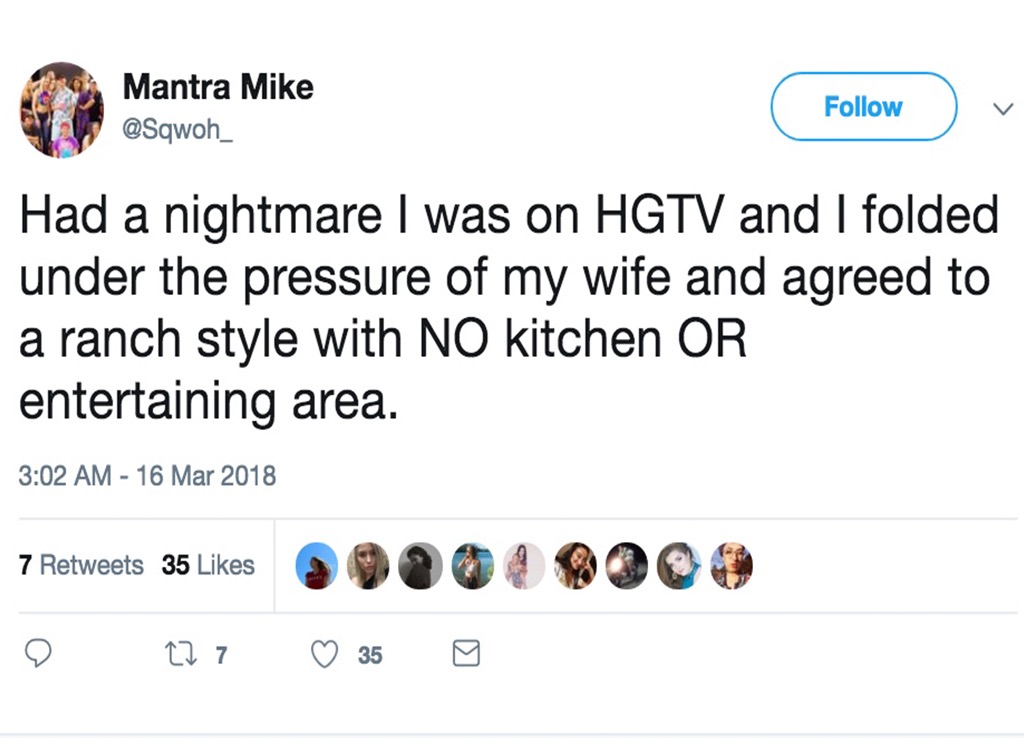 Some design shows are so engrossing they even begin to seep into your subconscious. Unfortunately, that can lead to horrible nightmares, like having to pick a home that doesn't have ample space to entertain an endless supply of guests.

12
On Setting the Bar Low

While many home design show participants can't imagine living in a house that isn't completely outfitted for their every want and need, there are always the folks who don't get into the spirit of things and ask for little more than a roof without holes in it. 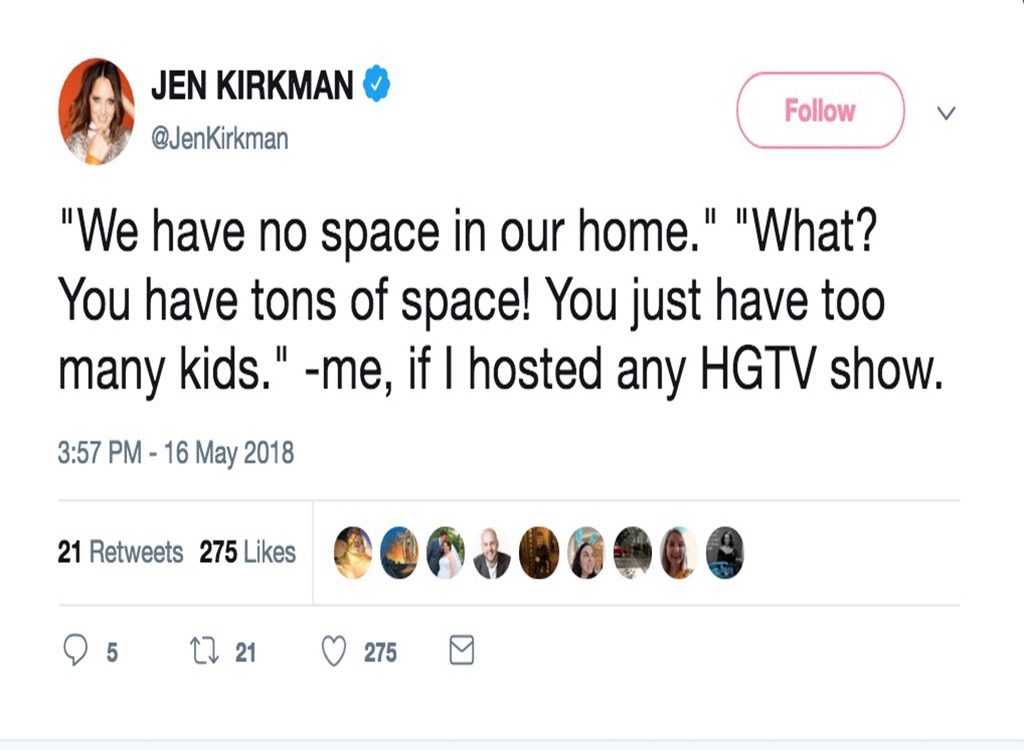 On some home design shows, it's clear that the issue isn't so much that their existing home is undersized. It often seems like the 45 kids, 20 drum sets, 100 pets, and endless toys that live in the place are more the issue than a simple lack of square footage. 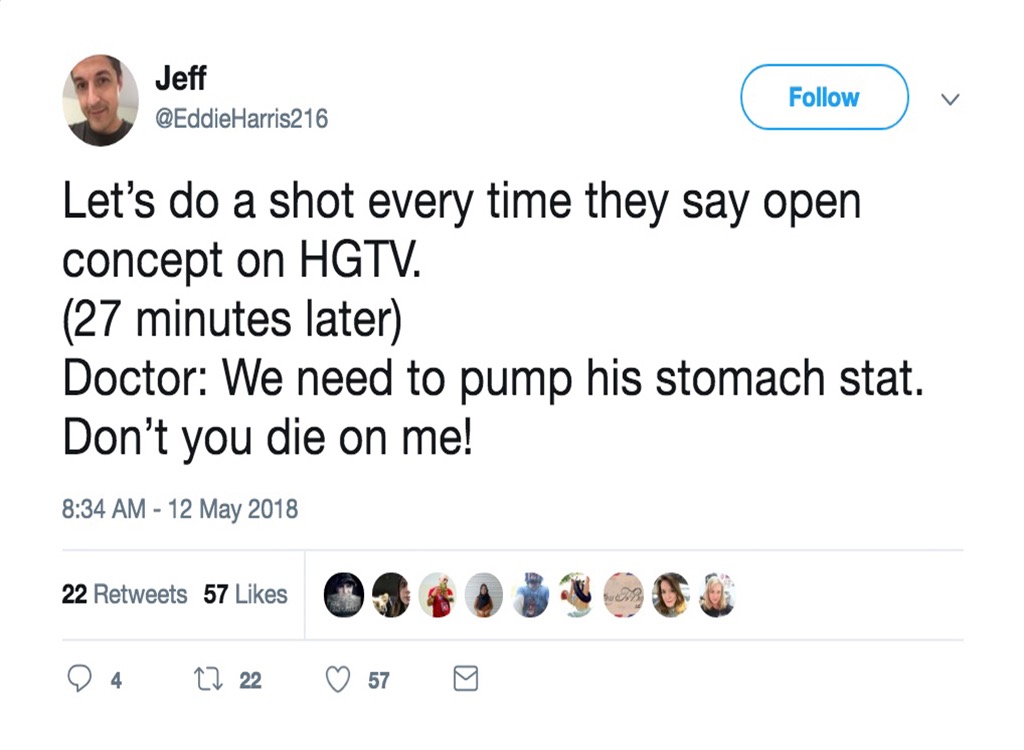 It's always in your best interest to drink responsibly. That's why you should never, ever play a drinking game based on whenever the words "open concept," "light, bright, and airy," or "fixer upper" are uttered on a design show.

15
On Buying the Hype 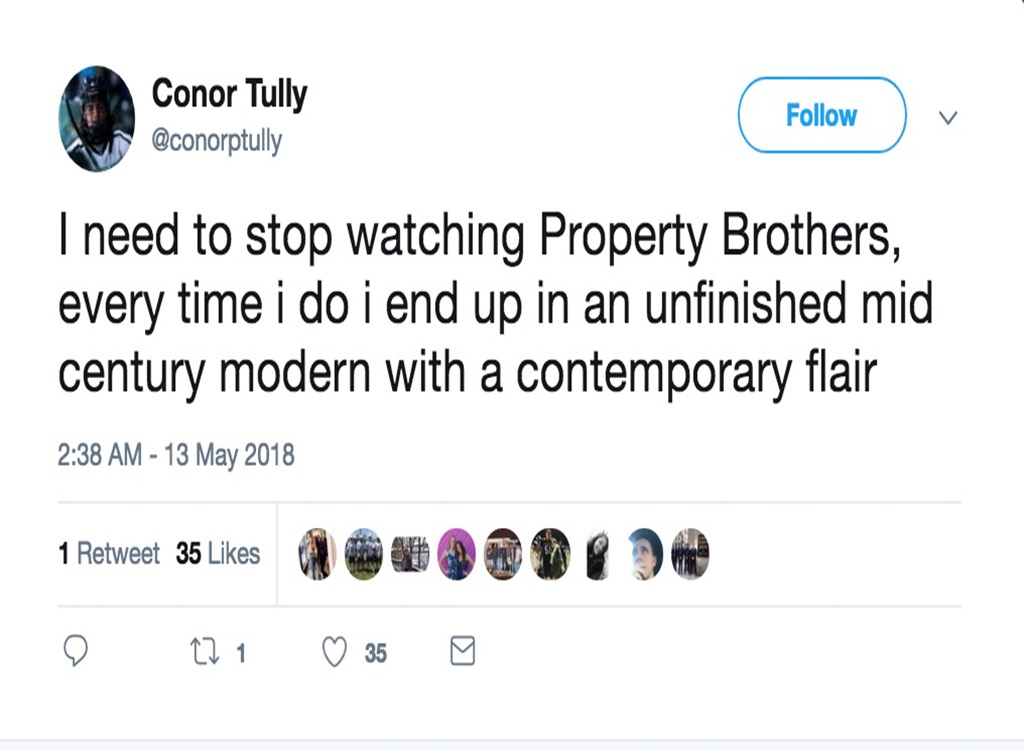 The Property Brothers are so convincing that it's almost impossible not to get won over by their endless desire to sell buyers on mid-century modern homes.

16
On Getting Into the Spirit of Things 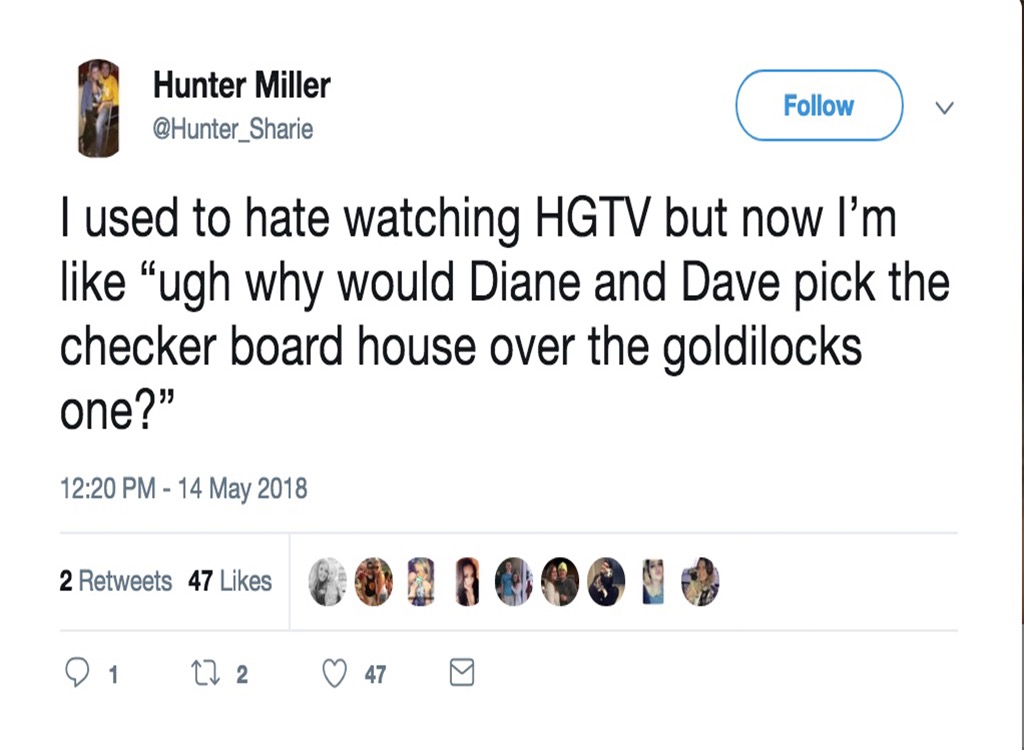 Just because you said you wouldn't get invested in a silly design show doesn't mean you'll be able to keep that promise. Cut to: 20 minutes in, when you can't believe how over budget that renovation is going.

Sure, home design shows may get repetitive after a while. Does that mean you're going to stop watching? Absolutely not. 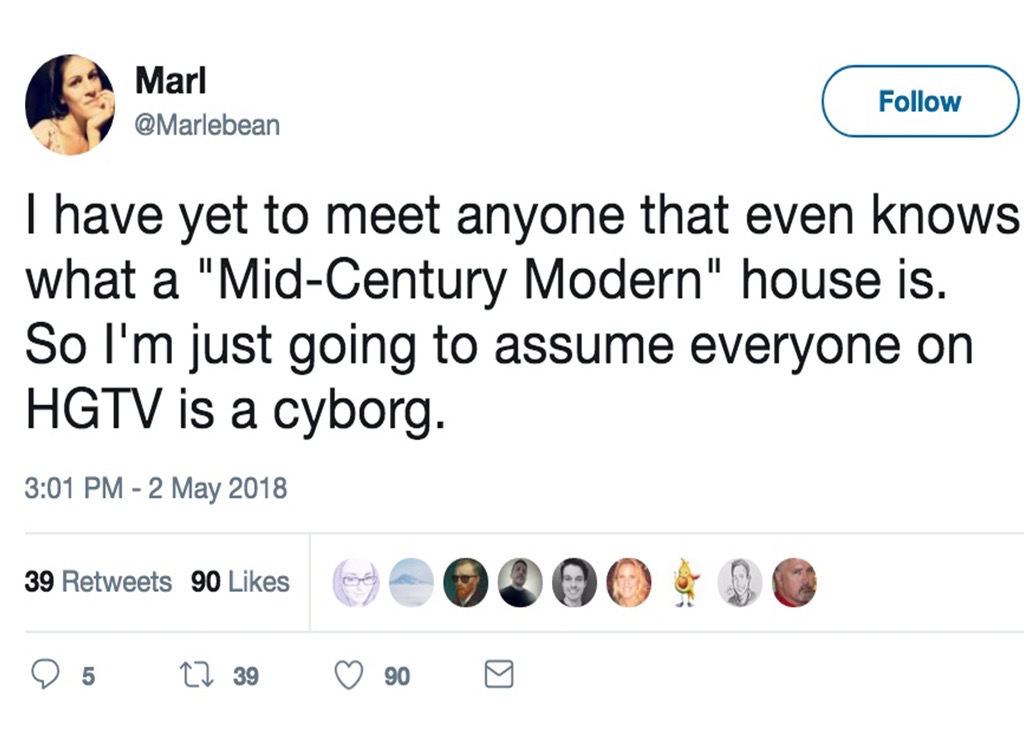 Home design shows seem to assume that everyone knows the industry jargon. Ask the average person to describe three features of a mid-century modern home, however, and they'd likely draw a blank. 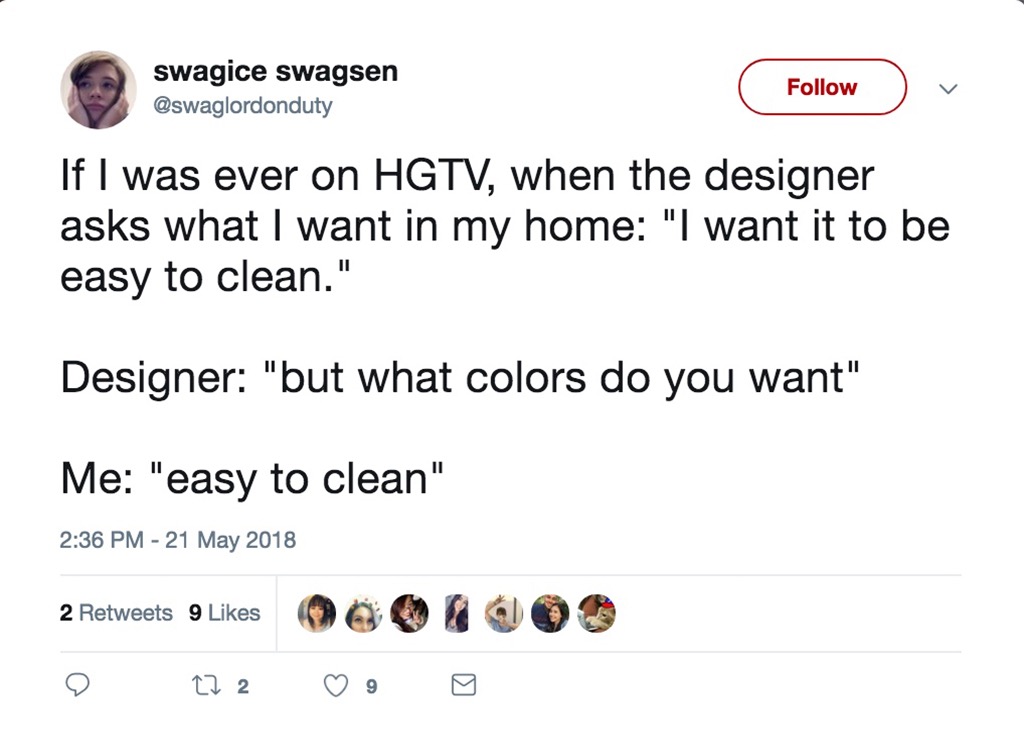 Not everyone is looking for pendant lighting and crown moldings in their home. Some of us are just looking for a place you only have to dust once a decade.

20
On Learning to Love the Genre 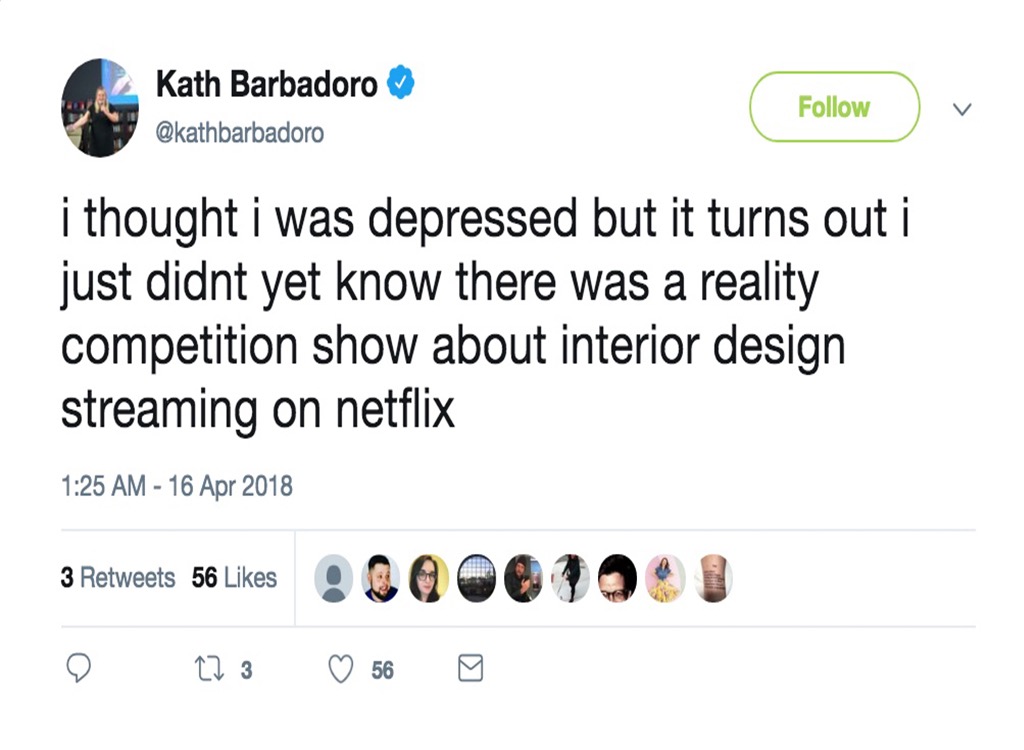 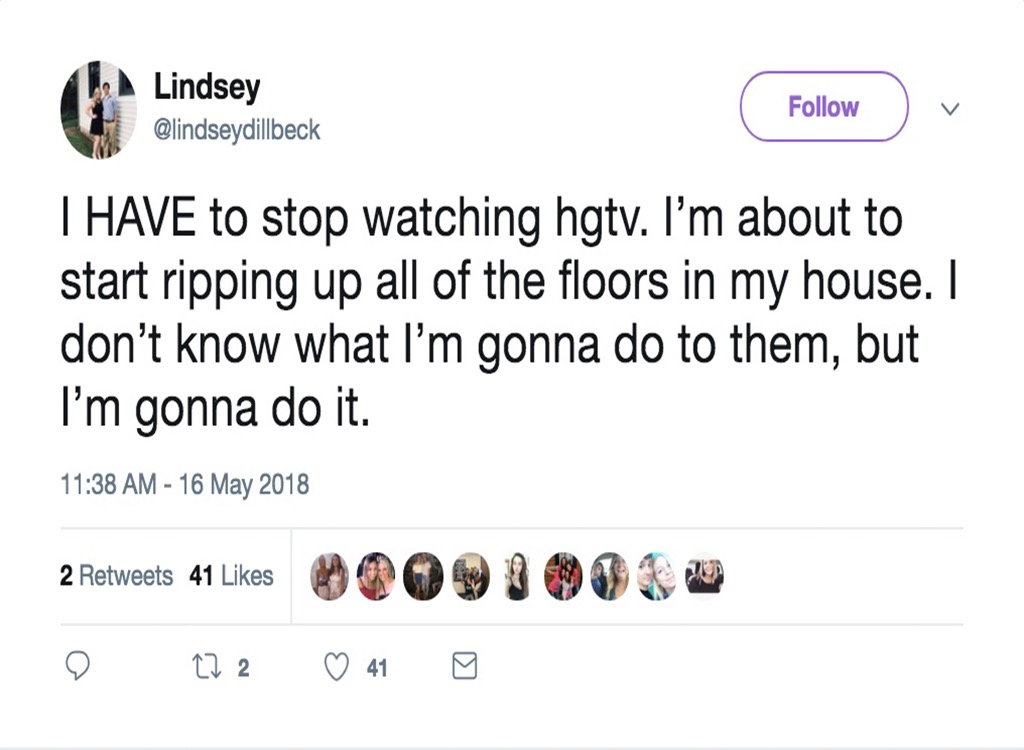 Sometimes, a little design inspiration goes a long way. Just try to watch an HGTV marathon without deciding that there's something in your house that you should probably take a sledgehammer to.

22
On the Magic of Editing 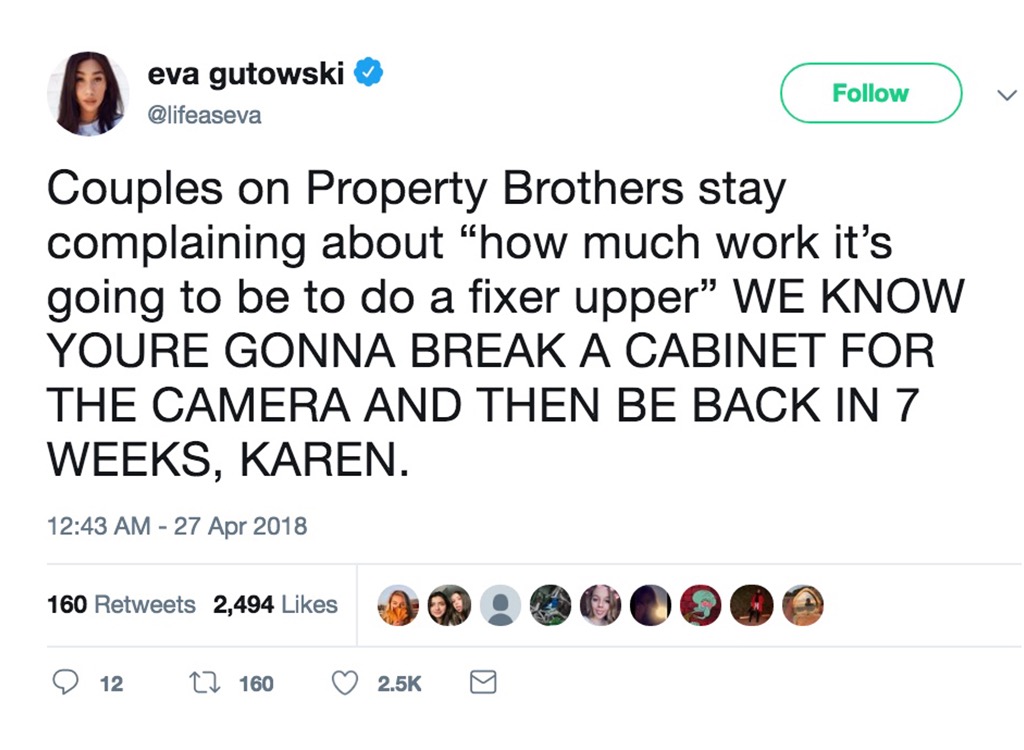 Home design shows make renovations seem like such a smooth and easy process. In reality, renovations aren't you and handsome twins magically transforming your house in a day. It's eighteen strangers making your space unlivable for the next six months.

There are few things that can test a relationship like watching a home design show together. Luckily, if you don't find yourself fighting with your partner by the end, you know you've got a keeper. 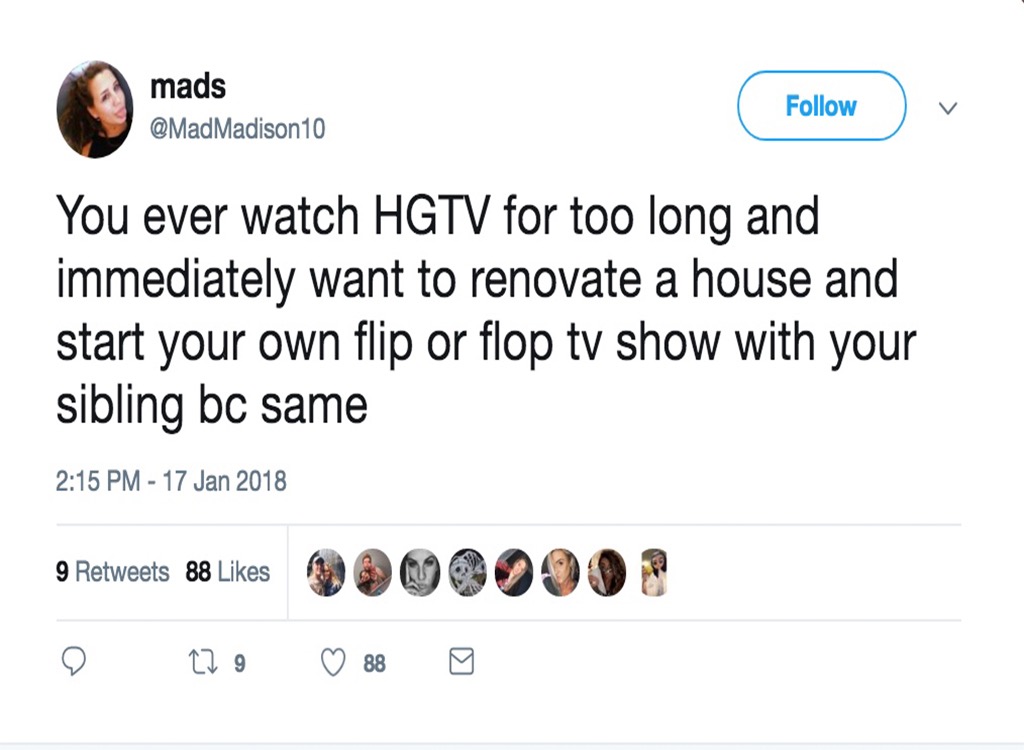 Thanks to all the work that goes on off-screen on most home design shows, even the least construction-competent individuals can get some pretty wild ideas about what they're capable of after watching a few hours of the stuff. 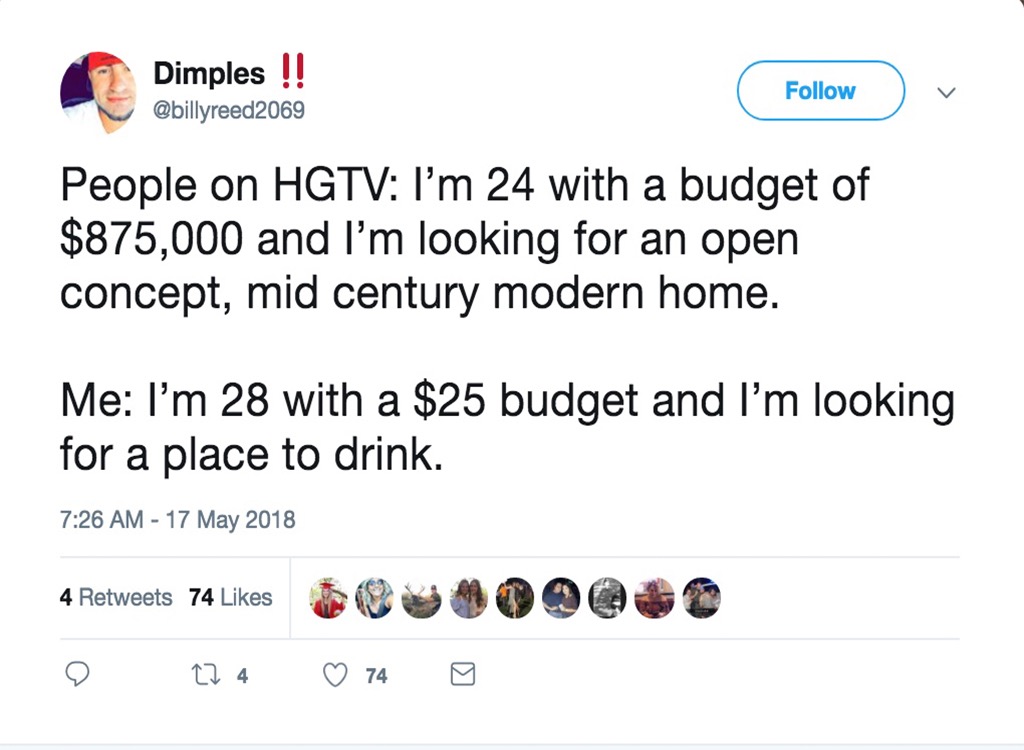 How is it that the couples on HGTV seem to have a lifetime's worth of savings and a strong understanding of their design preferences when most people their age are still searching for food money in between their couch cushions?

26
On Getting Sucked In 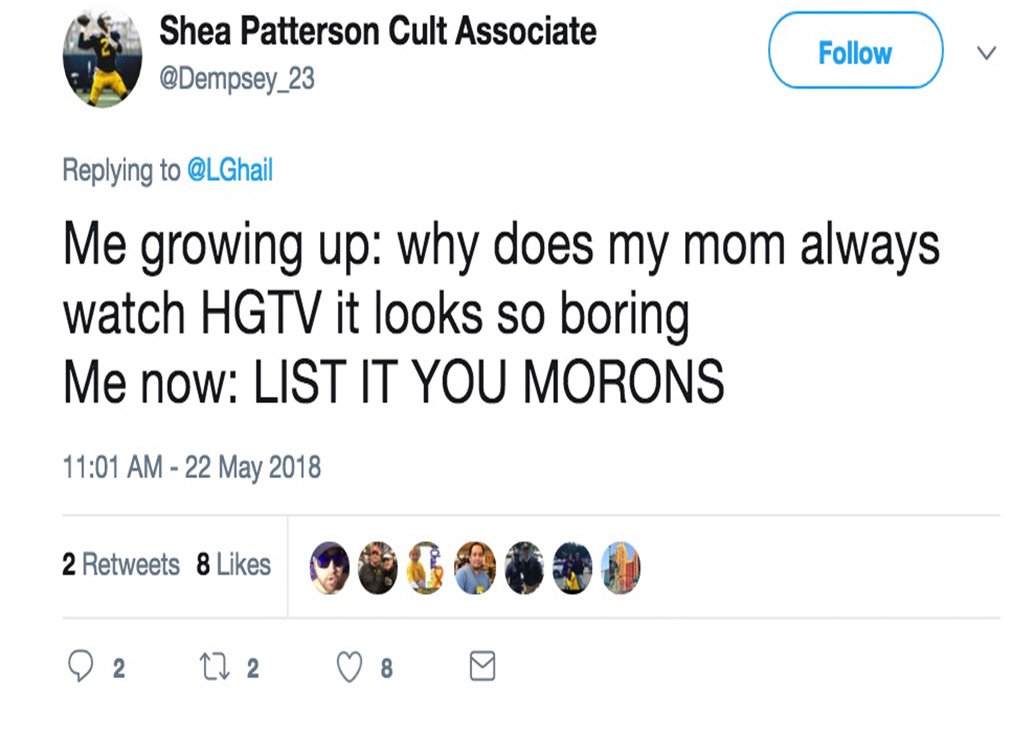 Home design shows may seem boring at first, but make no mistake: after a few hours watching, you'll be screaming at the TV like your dad on Super Bowl Sunday.

27
On Translating Those Lessons to Real Life 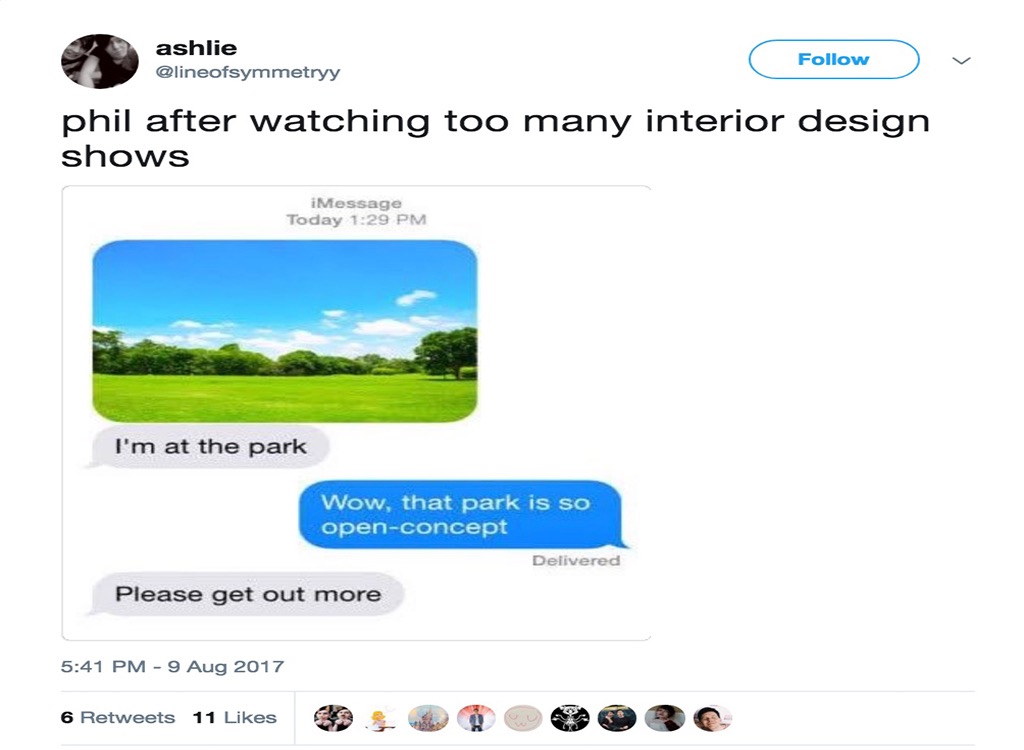 Once you've gotten hooked on a home design show, you'll be seeing the lessons you learn from it everywhere.

28
On the Little Things 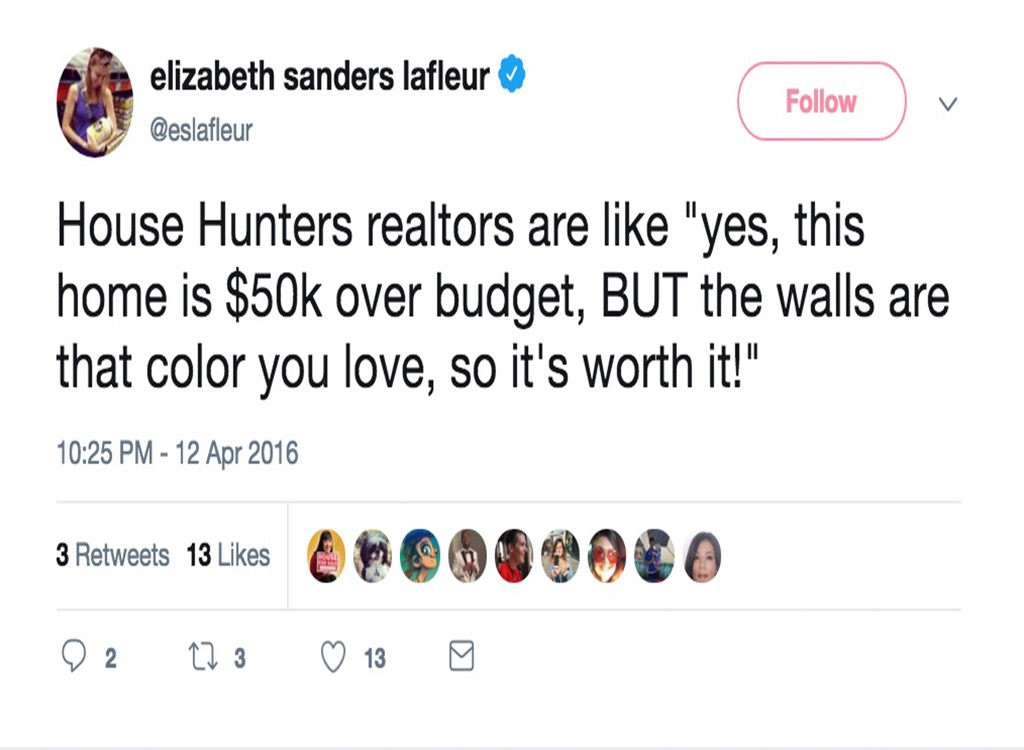 If you've watched enough design shows, you can attest to the fact that people looking for homes tend to focus on the wrong things, like paint color, while ignoring bigger issues, like convenience and budget. 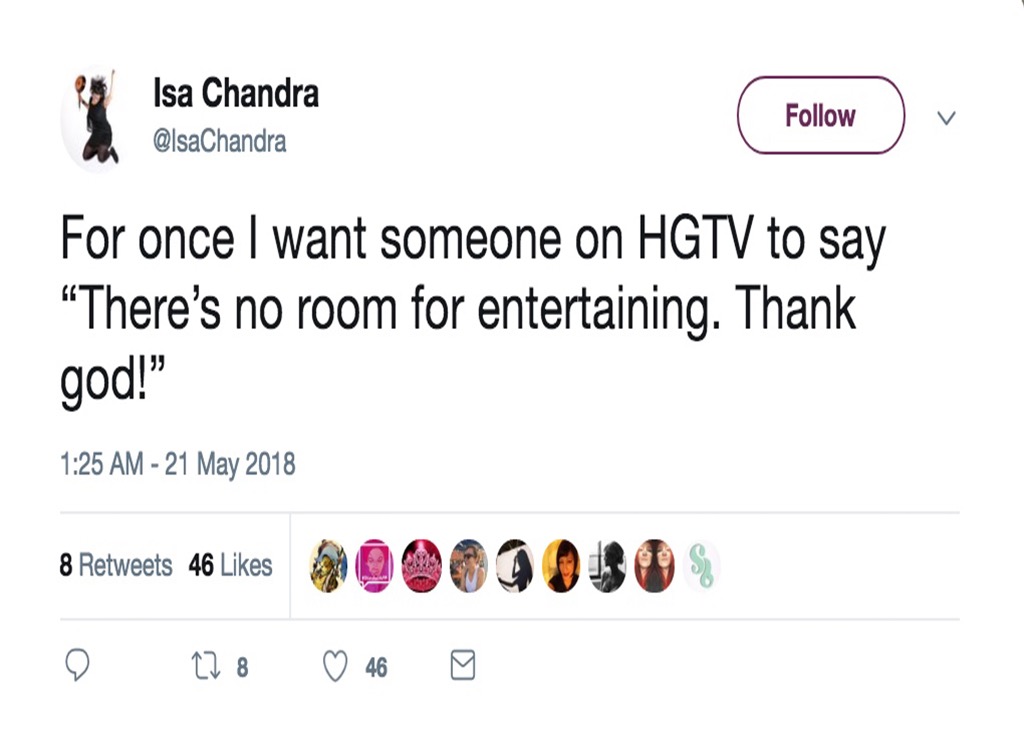 Considering that virtually every client on every home design show requests "entertaining space" as a feature of their home, it's pretty clear there aren't a whole lot of introverts in the bunch. 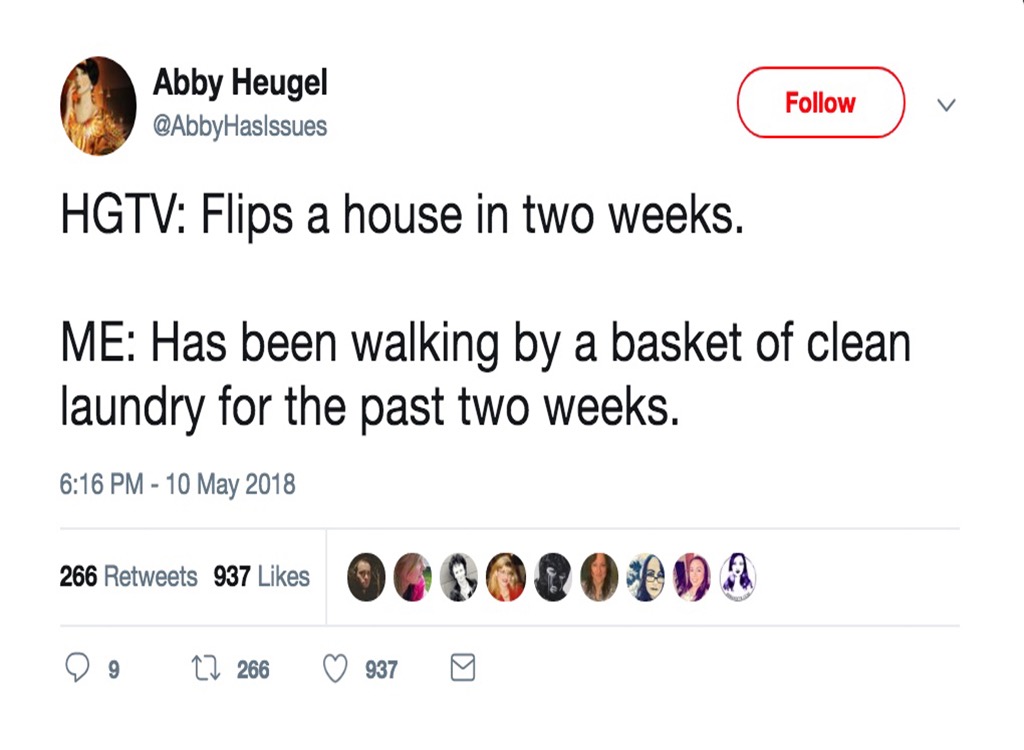 It can be disheartening to see just how quickly the contractors and designers on home design shows can rebuild a house from the studs up. That's especially true when you consider that the rest of us can barely do basic household chores without needing a nap. And for more hilarious jokes, enjoy The 20 Funniest Jokes From Kids' Movies.

Sarah Crow
Sarah Crow is a senior editor at Eat This, Not That!, where she focuses on celebrity news and health coverage. Read more
Filed Under
Humor • Jokes • TV
Read This Next
Latest News
Read This Next