​Why do we love it so much when celebrities write something genuinely funny on Twitter? Because it's the one time we're getting a taste of their true personality. These aren't pre-scripted lines that they've fine-tuned and rehearsed and then re-wrote after a test screening and copious notes from the studio. This is just them being off the cuff, making themselves laugh for the pure enjoyment of it. It feels intimate, like you're sitting with them at a bar and they're trying to crack you up.

Twitter admittedly has a lot of faults—it tends to bring out the worst a lot of people—but there's a reason we all keep coming back to it. Because what if Ryan Reynolds had a funny thought just pop into his head and he needs to share it with somebody? We can't miss that! With that in mind, here are 40 of the funniest tweets that celebrities shared with the world this year. And if you can't get enough yucks from Twitter, you don't want to miss The 20 Funniest Tweets About Being a Mom.

Maybe it's just us, but this sounds like the pitch for our new favorite Ryan Reynolds movie comedy.

And for more hilarity from the Merc with a Mouth, here are Ryan Reynolds' 30 Funniest Tweets.

At least in our heads, Groban is maniacally shelling soybeans while singing something beautiful in his angelic voice.

3
Patton Oswalt is no fan of Grover.

We get it, man. If our spouse had a romantic history with Grover from Sesame Street, we'd be insecure about it too.

4
Jimmy Fallon is not smooth with the ladies.

We know he's just kidding, but we actually find this line way more charming than 99 percent of pickup lines.

5
Dax Shepard gives his wife permission to find another husband.

Look, we loved "This is America," too, and we'll admit Glover is irresistible as Lando Calrissian.

6
Gabby Sidibe warned us that the robot revolution is coming.

We all knew this was coming, and the star of Precious reminds us that when the robots finally take over, it's at least a little bit our fault.

And if you want to get Alexa on your good side, here are the 20 Funniest Things You Can Ask Your Amazon Alexa.

Until the rapper just mentioned it, no, we honestly hadn't. But now it's ALL WE THINK ABOUT!

It's probably for the best that Gaffigan has no control over what people find attractive. Because, otherwise, there would be a lot of really gross beards out there.

9
Lena Dunham is is excited about flannel nightgowns.

The comedian and author suffers no fools, even if he's related to them.

The hilarious comedian and host of Billy on the Street broadcasts an ironic tweet from the set of American Horror Story.

We're with Seth on this. Mama Rogen, there are some things that should just stay inside your head, and certainly don't get shared with the rest of the world.

13
Chrissy Teigen is prepared to eat a LOT of chocolate.

It's almost like something double-dared the Sports Illustrated model to see how many French confectionaries she eat in a single sitting.

14
Kumail Nanjiani remembers the innocent past.

The Silicon Valley actor is making us wistful for old-school rotary phones.

The only thing that would've made this better is if he tried to explain the premise of Star Trek to Captain Kirk.

Lunch with Philipps‏ sounds like the funniest meal of the day.

17
Mindy Kaling has a theory about the Duchess of Sussex.

We agree, boat neck dresses are almost impossible to pull off, so we're pretty sure she's right about Markle being a superhero.

18
Lana Condor has an existential crisis about burritos.

A day without a breakfast burrito is truly a day without joy. We feel your pain, Lana. (And P.S., we loved you in To All the Boys I've Loved Before.)

19
Adam Levine is the best dad

His daughters may be too young to appreciate a Kazaam lunch box, but the Maroon 5 singer is clearly bringing his A-game to fatherhood.

20
Karamo Brown is a bit confused about fruit.

We're not a nutritionist so you don't have to take our word for it, but we're pretty sure what the Queer Eye host ate does not qualify as fruit—or maybe even food.

21
Anna Kendrick is the best at online shopping.

Every story needs to have a beginning, middle, and end. Anna Kendrick knows this. 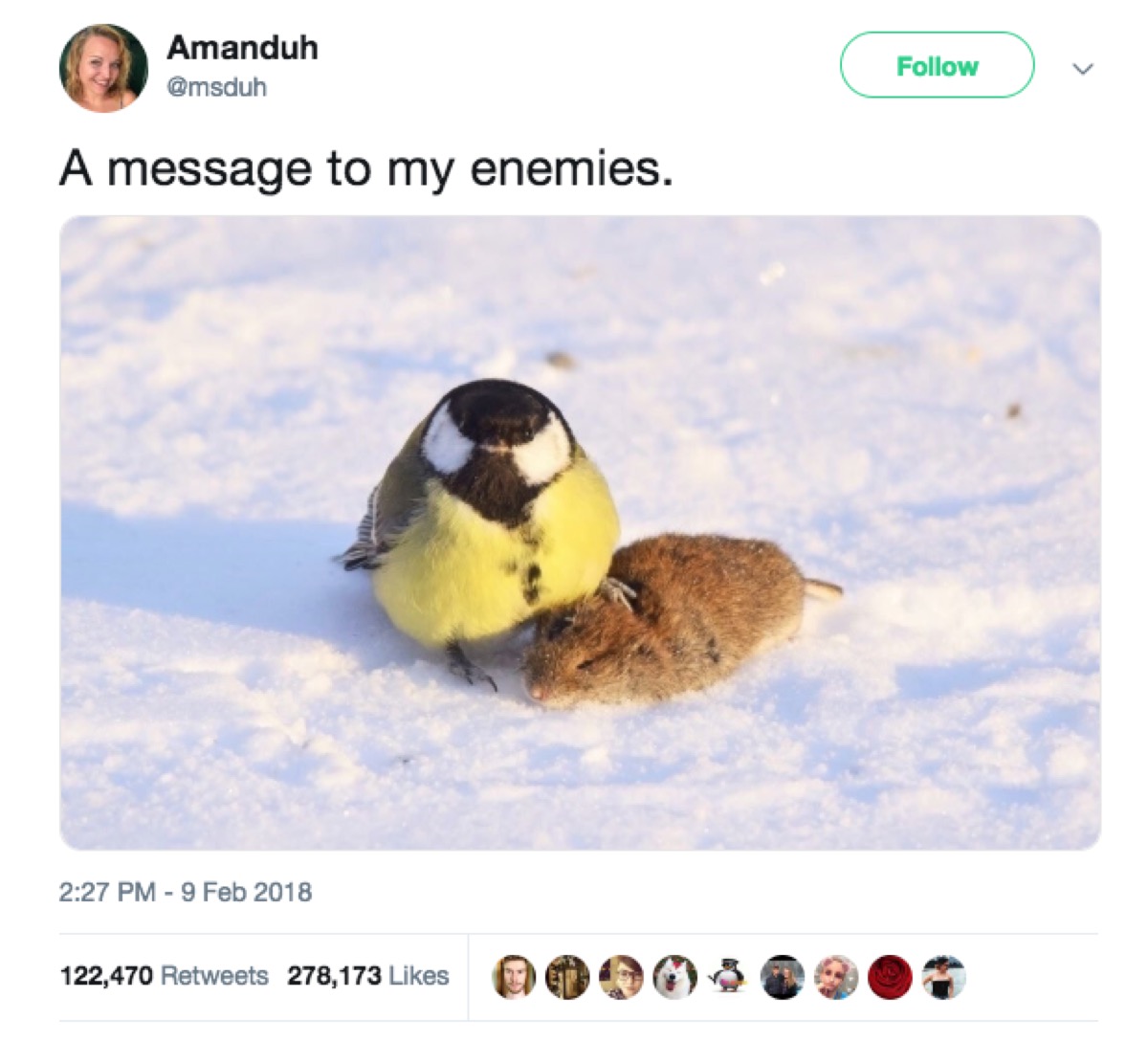 23
Emily Osment gets some perspective.

You've got to hand it to the one-time Hannah Montana star, she's a real "glass half full" kind of person.

We can't decide if that's adorable, or the most terrifying slasher film dog we've ever seen.

25
Rainn Wilson has questions about the menu's font.

We really, really want to believe this actually happened. And knowing the former Dwight Schrute from The Office, it just might have.

26
Chris Kelly has some big ambitions.

The Saturday Night Live writer and director is our spirit animal.

27
Mark Hamill is having second thoughts.

Whatever Luke Skywalker almost confessed to, we're sure it was juicy and we're willing to wait for it.

We've all been there, Julie. And actually, that sounds like a pretty good recipe. Liquid Rice Krispie treats? Sign us up!

Adam, don't worry, we're sure there are plenty of people who'd like to feed a championship figure skater and make idle chit-chat free of charge.

The singer and songwriter, who had a hit in the 1980s called "Right Here Waiting," doesn't usually make political commentary, but he couldn't pass up the opportunity to poke fun at president Trump's claim that he "misspoke" about Russian interference in the 2016 election.

Um… we're not sure how to break this to you, Ricky. You've looked… better?

32
Lili Reinhart meets a woman who's never heard of cream.

The Riverdale actress is clearly as perplexed as we are by the cafe customer who not only doesn't take cream in her coffee but seems suspicious that such a thing even exists.

You don't get a body like Josh Gad without a rigorous training schedule of food and naps.

34
Zach Braff isn't sure what he just saw.

The guy from Scrubs apparently has a lot of free time on his hands these days.

35
Chris Pratt is a time machine.

Turns out the Guardians of the Galaxy star is a real-life superhero. And so are you, probably. We're all really, really slow time machines!

If we ever go to Bed Bath and Beyond and see a redhead that looks vaguely familiar, we're getting the heck out of there.

It took a Disney Channel star to remind the world that we can't all dress like Guy Fieri and get away with it.

And the wall appreciates it, Rob. We need more civility in the world, even with inanimate objects.

We get a weird feeling the author and The Office regular is being sarcastic.

40
Sarah Silverman has a selfish dog.

It might have something to do with a dog's lack of opposable thumbs. Just a thought.

And for more A-lister hilarity, check out these 30 Wildly Entertaining Photos of Celebrities Using Public Transportation.