Meet the A-listers who ride the A train.

There's just something undeniably satisfying about seeing world-famous celebrities—yes, the mega-famous A-listers who live their lives as if kissed by the gods—slumming it like the rest of us do. (Cue the cliché: "Stars, they're just like us!") But you have to admit that there's something especially entertaining about seeing world-famous celebs riding public transportation.

Maybe it's because they look kinda trapped in a funny sort of way. Maybe it's because they look so uncomfortable and are trying desperately and unsuccessfully to look invisible. Or maybe it's because just seeing them among us regular folk makes us feel so much better about our own lives. Whatever the case, here we've gathered the greatest photos of celebrities using public transportation for your viewing pleasure. So click on—and enjoy! And for more And for more ways celebrities are just like us, these are the 30 Awful Jobs Celebrities Had Before They Became Famous,

Rapper J. Cole is known for being incredibly relatable—so it should come as no surprise that he was spotted on a bus in Queens, simply sporting a white tee and jeans. And for more of your favorite stars ditching the glamour for a more normal life, these are the 20 Celebrities Who Shunned Hollywood for Small Town Life.

Television host and Real Housewives confidante Andy Cohen loves taking the subway in New York City—and often even brings along famous friends like Sarah Jessica Parker and Matthew Broderick. And, similar to the rest of us stuck taking the subway to our 9-to-5s, Cohen cracks jokes about his fellow passengers to make the commute a bit less painful.

Back in 2013, singer-songwriter Ed Sheeran was caught riding the New York City subway to his own show, with an accompanying caption on Twitter asking how the public couldn't love a man this humble—and we have to agree with the Twitter user who snapped this picture of Sheeran. And for those celebrities who have most likely never taken public transportation, check out these 20 Celebrities Who Were Born Wealthy.

When he's not turning heads with Andy Cohen and Sarah Jessica Parker, his wife, on public transportation, Matthew Broderick is slumped in the corner, trying his best to avoid any human interaction. Whether this is to hide from obsessive fans or just to steer clear of humans altogether, we can all relate to these underground habits.

Though her character, Carrie Bradshaw, would rather walk twenty blocks than take any form of public transportation that isn't a yellow cab, Sarah Jessica Parker struts through the underground tunnels like it's her business. In fact, Parker has been spotted on the New York City subway on numerous occasions—nearly always decked out in heels, no less.

In an interview with Vulture, Parker noted her use of the subway—along with a few other existential thoughts about New York City as well: "The city does beat you up, and it asks a lot of you. And sometimes it's impossible to live up to its standards. Just taking the subway every day, I think, 'My God, can't we do this better, everybody?' There is a sort of drumbeat that's relentless here in New York. But I still love it." And for more on the hidden lives of celebrities, check out these 30 Funniest Photos of Celebrities as Teens.

Though actor Tom Hanks may be doing his best to remain undetected on this New York City subway train, this person on Twitter managed to grab a photo of the star (manspreading, no less). Despite his celebrity, Hanks claims that many commuters don't even notice his presence on their ride, telling New York that "Nobody looks at anybody on the subway. Occasionally someone might give you a thumbs-up, and you nod. But the city is magnificent as far as that brand of easy anonymity. You just fold right in."

Though the orange seats of the New York City subway don't really complement her blue dress, Mariah Carey still made quite a statement in her underground voyage home from a glitzy gala in Manhattan. The pop star was even kind enough to share her plebian adventures with the rest of the world via Instagram, where she was captured saying that she might as well take the subway since she was "underdressed" anyway.

Even though Hillary Clinton looked incredibly apprehensive at the beginning of her voyage uptown, others on the train during the busiest point of rush hour in New York City seemed mostly unfazed by her presence (and an entire horde of security officials). In fact, commuters mostly wanted to be left alone, though the then-presidential candidate was busy attempting to get to know her fellow New Yorkers—but they were having none of it. They had places to be, you know?

As you can see from this collage of images created by a Twitter user, actor Jake Gyllenhaal has been busy becoming a subway heartthrob. Just like any other New Yorker, he does his best to ignore others on the commute, burying his head in a book or simply pumping music through his headphones.

Back in 2014, actor Bradley Cooper proudly told CBS News that he rode the subway "everyday everywhere"—though, in an acknowledgment of his star status, Cooper is always seen wearing elaborate getups to attempt to hide from his adoring fans. Unfortunately for Cooper, though, this Twitter user wasn't buying the disguise.

Not only does Keanu Reeves ride the New York City subway often, but when he does, he shows the world that celebrities still retain their manners after reaching star status. During a particular ride in 2013, a fan witnessed Reeves give up his seat to a woman, capturing this act on video and creating an internet sensation—as if we needed more reasons to admire the Matrix star.

The duchess of cool, Helen Mirren, schooled us all in proper subway attire when she was captured riding along the New York City underground, dressed to the nines and looking completely unenthused on this mode of transportation. Her subway etiquette was entirely too impressive as she attempted to take up as little space as possible, while somehow still managing to look completely chic.

Fergie's ride on the subway demonstrates how every New Yorker dreams of appearing on public transportation—cool, collected, and entirely too fashionable to be bumping shoulders with every other straphanger in the underground. One commuter even mentioned that the Black Eyed Peas singer sang along as another rider began playing "Glamorous" as a tribute to her unexpected arrival on the train.

As if we needed another reason to adore the Harry Potter star, Emma Watson posted this photo on her Instagram, showing her fans the myriad of ways she is pushing literature on the unassuming residents of New York City—including hiding books along subway platforms. Not only do we love that Watson ventured into the New York City subway system, but that she did so for such a commendable cause.

The actress and Flower Beauty creator snapped a photo of herself doing what nearly every other female has been guilty of doing while riding public transportation—applying her makeup. In this one simple act, Drew Barrymore demonstrated to all of us that she is a true city girl.ae0fcc31ae342fd3a1346ebb1f342fcb

One Direction star Niall Horan also felt compelled to document his adventures on public transportation—this time on the London underground. In the background, his fellow commuters seemed less than excited to be sharing the same space with this boy band legend.

With his luscious locks piled high on his head, fellow One Direction member Harry Styles was spotted riding a bus in Los Angeles. And for those debating whether or not this is, in fact, the superstar—and not some lucky look-alike—many fans were correct in noting that Styles was wearing the same outfit that he had worn earlier while snapping photos with fans in the city.

Providing further proof that pop diva Katy Perry can't do anything quietly, her ride on the New York City subway (with all of her friends in tow, of course) created quite the stir, and the singer wanted to document it all on her Instagram account. And, if you look to the right of Perry, you'll notice another famous face—that of Rita Ora, who joined the singer on a New Year's Eve jaunt through the Big Apple.

Similar to her fellow pop icon and fashion-accessory inspiration, Beyonce, Lily Allen knows how to turn heads—even in the underground tunnels of London. As it turns out, Allen is a big fan of Beyonce and was actually on her way to see her in concert. This photo is entirely too relatable as we find out that Allen is just as obsessed with 'Yonce as we all are.

Jenny was going back to the block—the Bronx—and doing it with complete style and ease while waiting for the train to arrive. She's back on the 6 and loving every second of it.

Singer Nicole Scherzinger became our public transportation spirit animal when she posted this picture to her Instagram, demonstrating terrible train etiquette but proving that the London Underground can be incredibly glamorous—if taken from the right angle.

Entourage star Adrian Grenier snapped this picture outside of bus stop in New York City, assuring us all that non-celebs aren't the only ones standing outside in the cold, waiting for a bus that will be inevitably delayed.

Nice try, Dave Grohl. Did you really think that a seat in the corner of this Chicago train would hide you from throngs of fans? From the shocked look on his face, we feel safe in assuming that he hadn't thought this plan through. Regardless, he looks entirely too cheerful for a trek through the train system on a Monday. 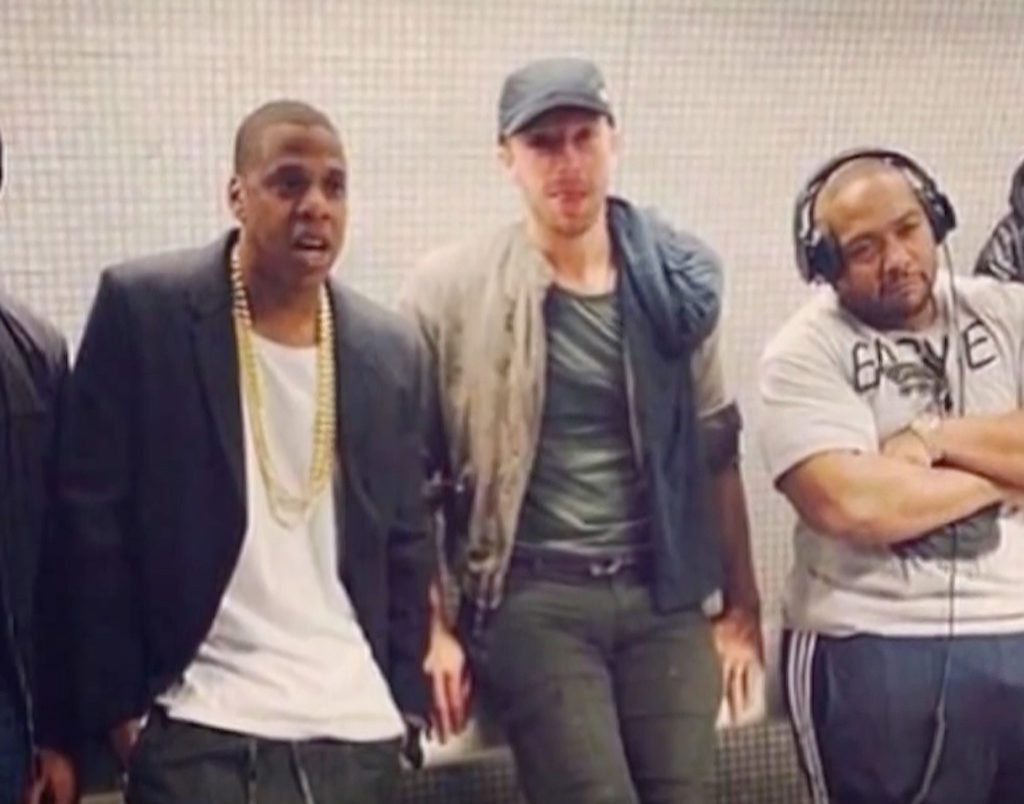 This trio took a ride on the London underground back in 2013 to make it to Jay-Z's show, where Chris Martin, lead singer of Coldplay, and Timbaland were set to make brief appearances on stage. The group was all smiles as they encountered numerous fans aboard the underground train. In the past, New York native Jay-Z has spoken about his affinity for his hometown's public transportation.

Rihanna loves taking public transportation, and has even encouraged to do so, citing a responsibility to be kinder to the earth. Whether's she strutting through the station in leather from head to toe, or simply causing a commotion in the London underground, Rih proves time and again that she is the only girl in the world for us.

Like any other normal commuter taking the New York City subway, actress Claire Danes looks to be squeezing in a few extra moments of work before her train arrives.

Rock legend Rod Stewart and wife Penny Lancaster snapped a picture together before "sneaking into London" via the London underground, where the pair were headed to Stewart's show later that night. Like any good tourist, the pair looks thrilled to be taking this form of public transportation just like any other local would.

Last winter, Lebron James and the Cleveland Cavaliers nearly broke the internet when they all rode the New York City subway together. Facing heavy traffic leading up to their game against the New York Knicks, the entire team found a much more efficient way to make it to the game on time—they hopped on the subway (and recorded every second of their hilarious interactions with fans).

Baby Spice was spotted riding the London Tube in 2013 and seemed to be all smiles for the incredibly eager commuter (notice the reflection in the glass) snapping more than enough photos of the singer. And to see if you're built for the underground, check out the 15 Signs You're a City Person.

Ashley Moor
Ashley hails from Dayton, Ohio, and has more than six years of experience in print and digital media. Read more
Filed Under
Celebrities • Funny
Read This Next
Latest News
Read This Next