Never Say These 4 Words to the Person Next to You on a Plane, Expert Warns

Airplane travel these days is a highly fraught experience. Current circumstances have created a perfect storm of crowded airports, oversold or canceled flights, and passengers assaulting crew members—and that's all without the threat of COVID exposure putting everyone on edge. With that in mind, the last thing you'd want to do is to make an already charged situation even worse by making the person next to you on the plane uncomfortable. Read on to discover the four words you should never say to your plane seatmate, according to an etiquette expert.

Don't say "I'm a big talker" to the person next to you on a plane—and then keep talking.

Among so many contenders that come to her mind, August Abbott, PhD, a relationship counselor and etiquette expert on JustAnswer, says the very worst thing you can say to your plane seatmate is "I'm a big talker" or any other comment about how much you plan to chat for the duration of the flight—followed up by delivery on the promise.

"There are so many [things not to say]," she says, "but the one that makes me want to change my flight is when someone says, 'I'm a nervous flyer, so I talk a lot!'"

RELATED: Never Wear This Type of Clothing on a Plane, Experts Warn.

Keep conversation minimal and light if you initiate it at all. 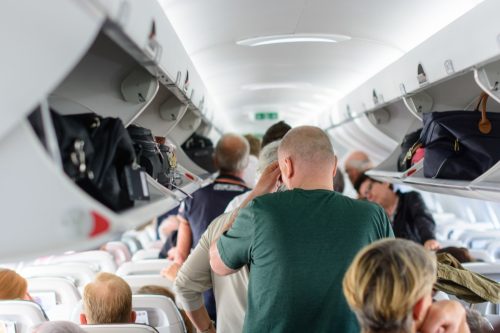 You want to keep things amicable while you're flying side by side, but there's no need to keep the conversation flowing. "Your ideal conversation to any stranger on a plane should be little more than, 'hi, I'm (name). I'm coming from (where) going to (where else), are you doing well today?'" Abbott suggests.

Continue the conversation only if you're invited.

That's plenty of conversation with a stranger on an airplane—unless it's clear that both parties are willing and eager to keep it going. "If they seem disinterested, don't push it. Put your headphones on, break out your phone to play a game on silent, and respect that just because we're nearly in each others' laps doesn't mean we need to be intimate or prying or even forced to make conversation," Abbott says. "From there if they want to talk, keep it light, listen a lot, ask about them a lot more."

She recalls once spending 12 hours on a flight with someone who clearly didn't care to be talkative. "As we were disembarking, they thanked me!" she says. "They said they were working through some things in their life and really needed the quiet time. They appreciated that I didn't impose myself on them like they feared I would."

RELATED: For more etiquette advice delivered straight to your inbox, sign up for our daily newsletter.

"Sometimes the worst thing to say someone on a plane is anything outside of the realm of 'hello,'" Abbott says of many people's preference for silence. But she also offered several "runners up" for major pitfalls to avoid at all costs:

In the end, she says, airplane etiquette is about kindness and common sense. "Mutual respect … is the teamwork we so desperately need in this world that's sometimes upside down," Abbott concludes. "Common sense and respect are the cornerstones of our 'how to live' handbook."