The 20 Most Dog-Friendly Countries In The World

Fido will never feel unwelcome at the dog park in these locales.

If you're a dog owner in America, then you know that going somewhere with your canine is no small feat. In fact, restaurants in cities from coast to coast prohibit bringing pups on the premises, and some outdoor areas, like public basketball courts in New York City or Malibu Creek State Park in California, won't even allow your furry friend to come along.

But not every country makes being a dog owner so difficult—in fact, in other places around the world, being a dog owner is actually encouraged. Take Sweden, for instance: The country loves its animals so much that it recently passed laws that limit the amount of time an animal can be caged. And in Poland, you'll find a movie theater where people can even bring their pup(s) to the movies! If you're looking to travel with your pet in tow, you'll want to check out these pet-friendly countries. And for more travel tips, don't miss the 20 Ways to Make Travel Less Stressful.

All around the world, France is known for its relaxed dog policies. One Telegraph writer noted that "even the most palatial chateaux will be happy to welcome your dog, either free of charge or for a small supplement." And don't be surprised to find a pup with his own seat at the table—the French are much more lenient about allowing animals in restaurants. 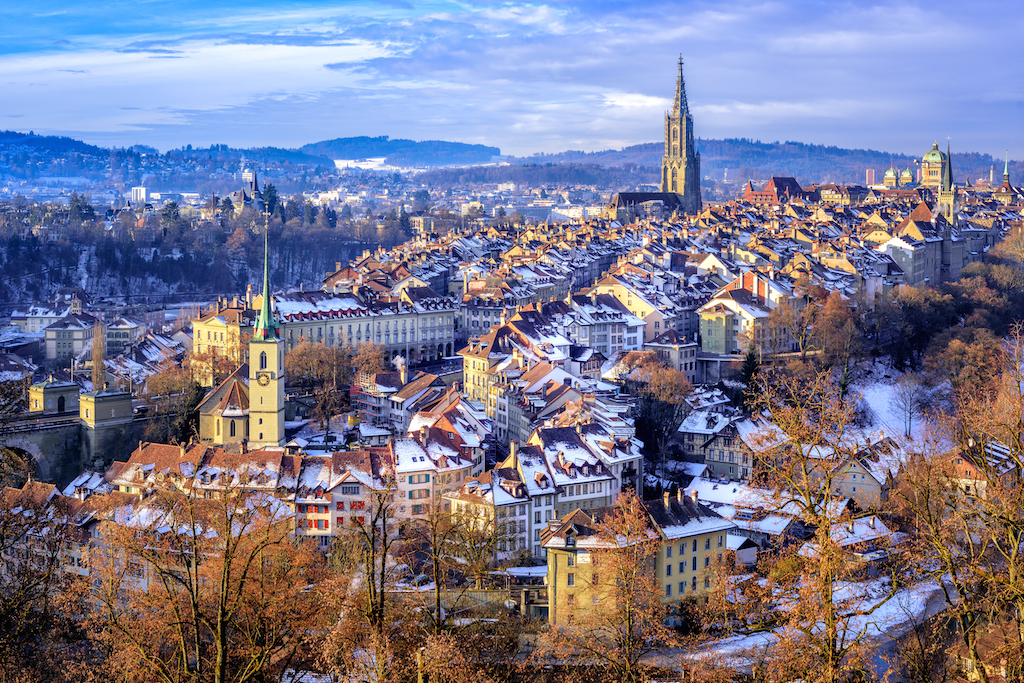 The Swiss take pet ownership very seriously—before you can own a dog, the government recommends a training course for first-time owners (and it was once a legal requirement.) But once your pet is properly registered and trained, you'll find that the country is an animal oasis. As one Swiss dog mom wrote: "Nearly every restaurant I've been inside makes a real effort to accommodate us. The offer of dog water as soon as we sit down is no longer a surprise to me." 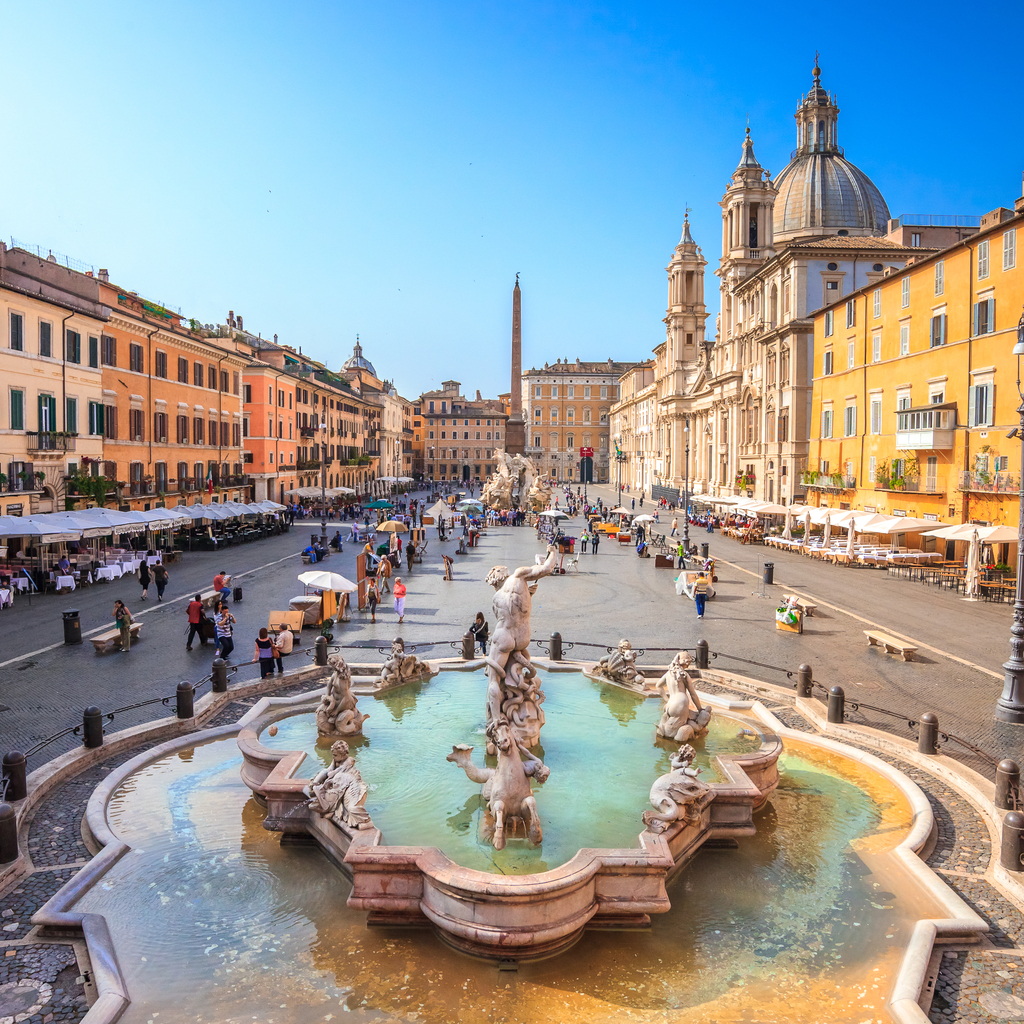 The Italians welcome canes and gattos with open arms. One of Italy's beaches, called Beaubeach, was even described in Italian newspaper The Local as "a canine-friendly stretch of sand on the outskirts of Rome." So whether you want to frolic on the beach or take in the beauty of Villa d'Este, you'll be pleased to find that Fido can tag along. 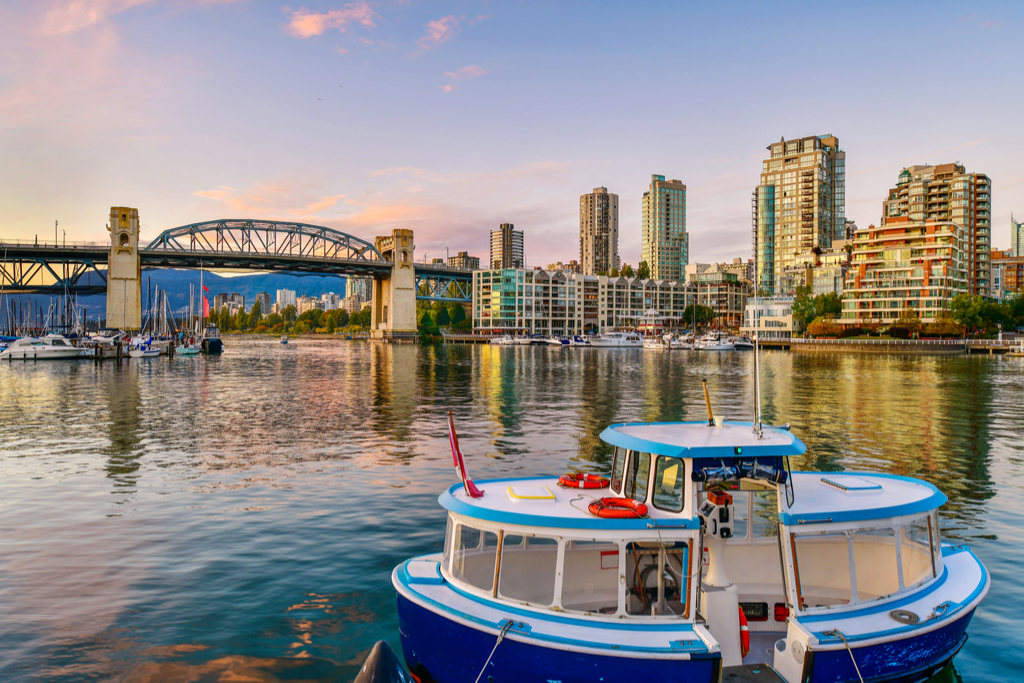 Canada's famous hospitality applies to human and animal friends alike. According to Trusted Housesitters, Vancouver is home to eight dog-friendly beaches and a pet-friendly ski resort, and Calgary houses more off-leash spaces than any other city in North America. And for more on why Vancouver is so great, see why it's one of The Best City for Americans to Live Abroad In.ae0fcc31ae342fd3a1346ebb1f342fcb 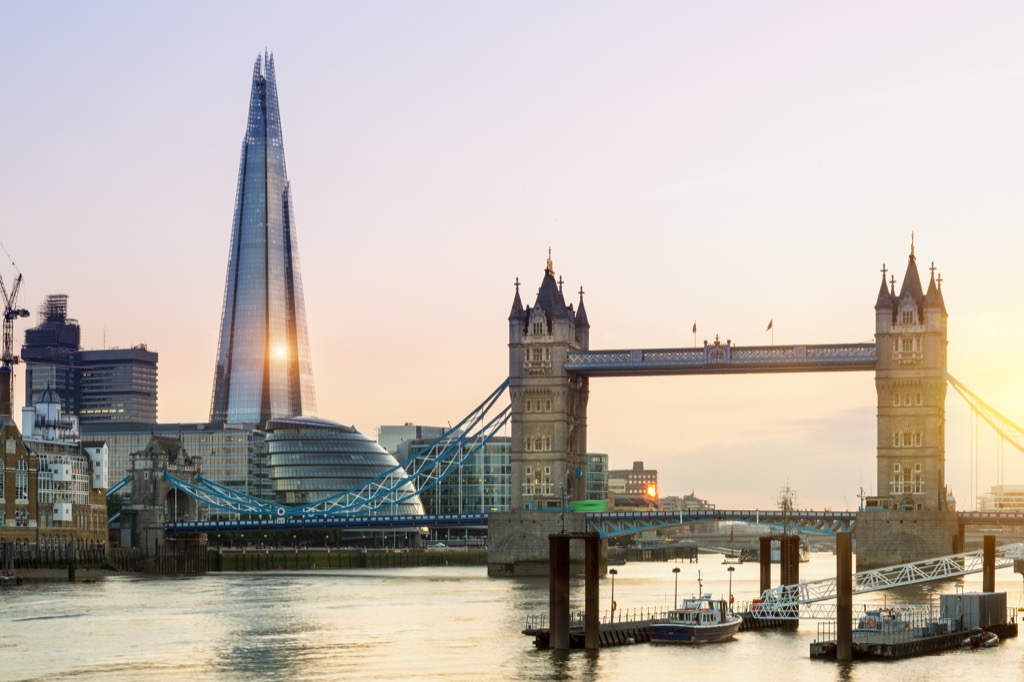 There are very few rules about bringing a dog or cat into the UK from another country, as the Brits love welcoming in their furry friends. Some of the many surprising dog-friendly places to visit in England include the Newlyn Art Gallery, the Crich Tramway Museum, and the Newhaven Fort. But it's not just furry friends that the United Kingdom loves—In 2008, the British Federation of Herpetologists reported that there were up to eight million reptiles and amphibians being kept as pets in the country. Before you head to Great Britain with your pet, just make sure to read up on the 20 Foods Doctors Always Avoid While Traveling.

Other countries should look to Germany as an example of how to humanely treat stray animals. The entire country abides by a strict no-kill policy, and the city of Berlin is home to the largest animal sanctuary in Europe with room to house nearly 2,000 animals at a time (horses included). As writer Michael Barmish said: "Dogs are a very important part of daily life [in Germany] and, as such, are treated with respect as any family member would [be]."

Whether you want to have indoor or outdoor fun with Fido, Holland is the place to be. Wherever you go, you'll be able to travel there by public transportation, dog by your side. Holland loves animals so much that the country even offers discounted health insurance rates for vegans and vegetarians (so residents will benefit both financially and physically from stealing This Firefighter's Vegetarian Diet for Staying Ripped.) In 2004, the Austrian parliament unanimously passed an animal rights bill that, amongst other things, outlaws choke collars and prevents animal stores from putting puppies and kittens up for display in the window. Though Austria can be slightly strict when it comes to their rules (all dogs must be leashed and muzzled on the train, for instance), they are huge animal lovers and will welcome your pup with open arms.

Not only are Swedish dogs allowed to walk without leashes, but the country even limits the amount of time dogs can be in crates. As far as activities go, you and your dog can enjoy visits to old fortresses, botanical gardens, camping grounds, and even gourmet restaurants. "European cities tend to be more dog-friendly than many American cities," travel blogger Frankie The Law Dog wrote, "but we were surprised to see a couple in a grocery store with their happy and well-behaved black Labrador Retriever [in Sweden]." 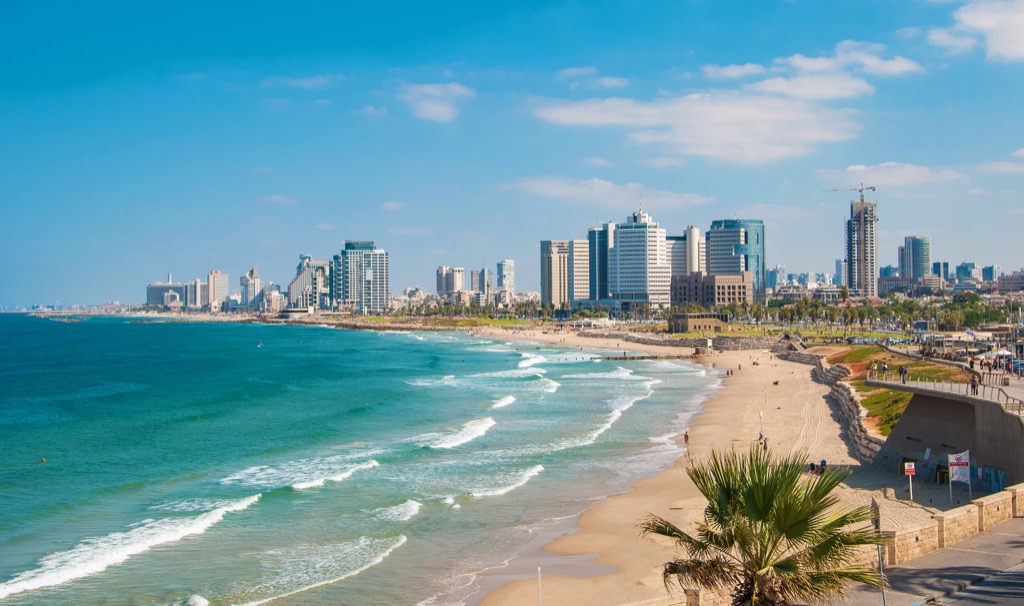 According to Booking.com, the Israeli city of Tel Aviv has the highest number of dogs per capita in the world with one dog for every 17 humans. And there is plenty for the pups to do: The city has 70 dog parks, a dog festival, and a special non-profit where dogs and humans alike can volunteer.

It's not just outdoor activities that you and your pet will be able to partake in in Poland. In the city of Krakow, for instance, dogs are welcome in museums like the Galica Jewish Museum and Polish Aviation Museum and can even catch a flick with you at the Kino pod Baranami movie theatre. And if you plan on visiting the country's capital city, you can use this website to find dog-friendly establishments, including restaurants, shops, and more. And for more travel insight, here are 15 Ways to Be a Safer Female Solo Traveler. 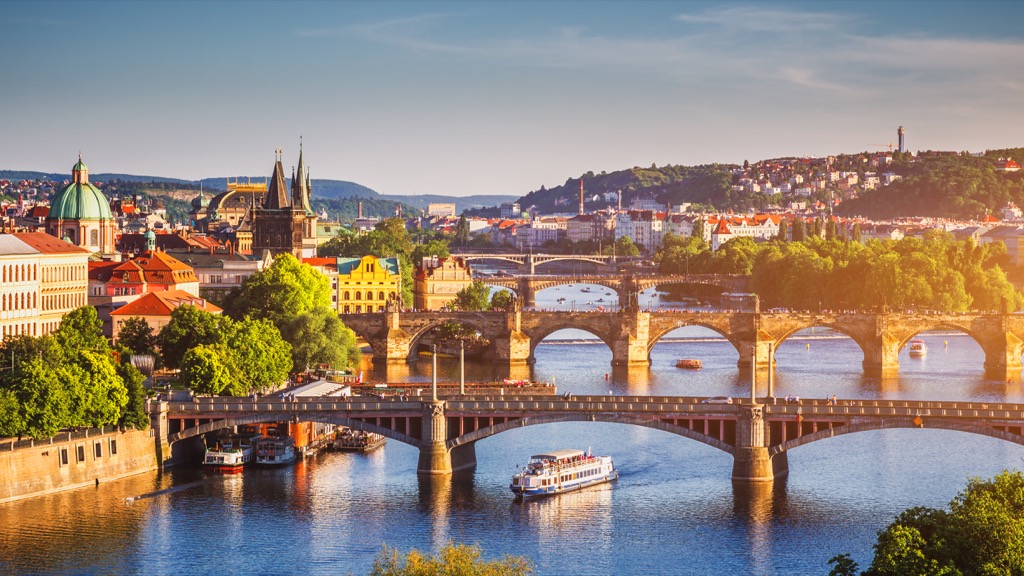 "The Czech Republic is definitely a dog nation," explained Czech publication Expats. Throughout the country, dogs are welcome to roam off-leash (so long as they're well-behaved) and can accompany their owners into small shops, on public transportation, and even at the cinema (if you go to Aero.) In Prague, you and your dog can meander through Letna Park and enjoy the various beer gardens along the way.

Bringing your pet on your trip to Japan won't prevent you from indulging in what the country has to offer. If you're a shopping addict, you and your dog can head to the Machida Grandberry Mall, an outdoor outlet mall with dozens of popular brands. Looking for something a little more thrilling? Take a trip to Tokyo Disneyland and DisneySea. While you explore the park, your dog can enjoy the services of the Pet Club—just don't forget to pick him up before you leave! And before you venture into Disney, read up on these 30 Shocking Facts About Amusement Parks.

The breezy Bahamas are chock-full of beaches (like Harbour Island and Cabbage Beach) where you and your canine can romp or relax, depending on your preference. And plenty of charter boats are willing to bring a furry passenger onboard if you're looking for an open water excursion.

"Animals are no longer considered as a thing, but as gifted non-human living beings with sensitivity and holders of certain rights," Luxembourg's cabinet said while discussing potential new animal rights laws. The European country takes the lives of its animal citizens very seriously, and as such, there are plenty of ways for canine compadres to stay entertained. From dog parks to Fido-friendly dining, there's no shortage of things to do with your dog by your side. 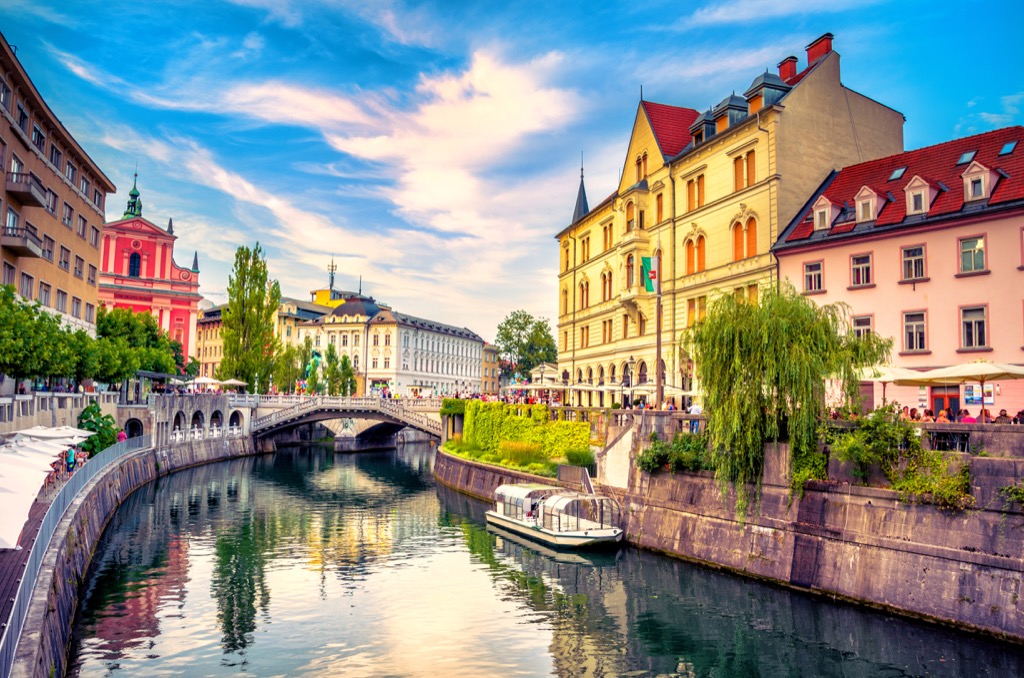 More than half of the hotels in Slovenia's capital city are dog-friendly, according to reports, making it one of the most animal-accommodating countries in Europe. And with this handy map, you can discover things to do, places to eat, and trails to hike, all of which allow—scratch that, encourage—dogs.

In Rio De Janeiro, pet owners and visitors alike enjoy taking leisurely strolls in the Lagoa Rodrigo de Freitas. In this park, you'll find two dog parks, trails, and plenty of seating where you can enjoy a small snack. As one dog owner explained: "Our dogs love to run and mingle, so it's the perfect environment for them. Plus the other dog owners there are more friendly… allowing dogs to co-mingle freely." Be careful if you visit Brazil, though, as it's one of the 25 Countries Where You Shouldn't Drink the Tap Water.

Most people know Belgium for its decadent chocolate and beer, but the country is also well-known in the travel community for being an animal-friendly oasis. In the city of Bruges, for instance, you can stay in a hotel called The Dog House with dog owners in mind, and when you aren't enjoying your lodging, most cafes and markets will allow your dog to accompany you. 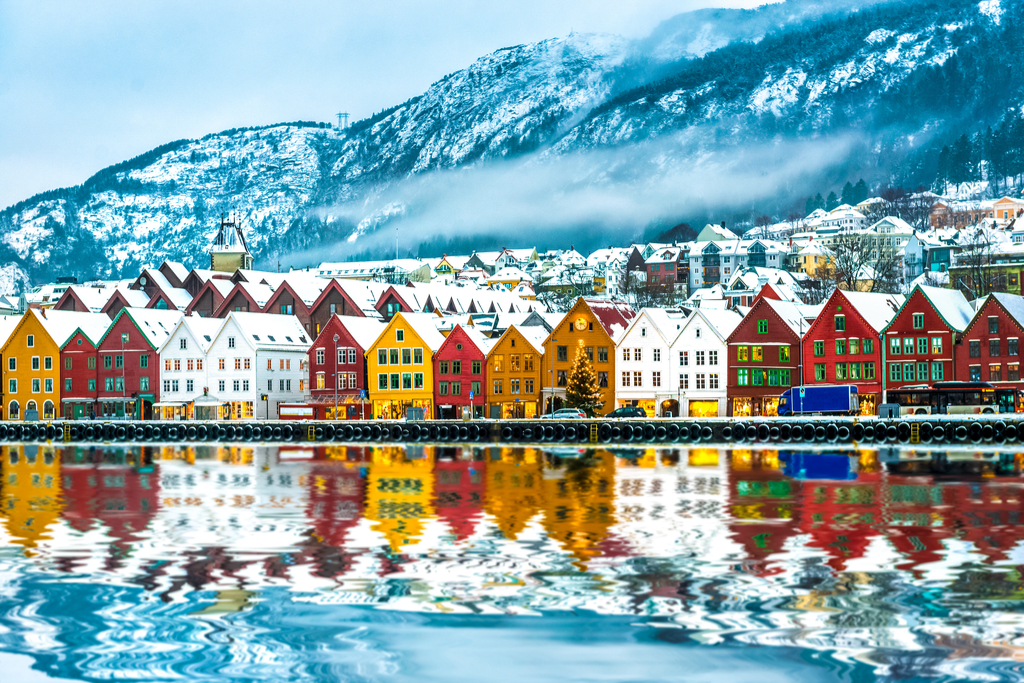 Travel to Norway's famed fjords via cruise, and you'll find that your dog is more than welcome. Some cruises even offer special pet-setting services, so you can take in the Norwegian sights while your pooch is pampered.

"As a traveler who takes her dog along, Croatia is no doubt our favorite country for a summer vacation with our furry friend Enzzo," writes travel blogger Allane Milliane. Swimming in the ocean, relaxing on the beach, and traveling via boat are just some of his favorite things to do there! Given that the Dalmatian is named after the Croatian city of Dalmatia, it figures that the country would be dog-friendly. Croatia might be dog-friendly, but we doubt they'd accommodate these 20 Craziest Pets People Actually Own.