Lions and tigers and bears—oh my!

There's no doubt about it: tigers and other exotic animals are absolutely adorable. But are they pet-material? For a lot of people, the answer is actually yes. While laws vary from state to state (and from country to country), most every exotic animal on this earth can be yours—as long as you follow a steep list of guidelines. According to the American Veterinary Medical Association, a whopping one in ten households in America owns at least one exotic animal.

Whether their wild animal of choice adapts to domesticated life quite easily (like Brutus the grizzly) or doesn't (see: Jake the hyena), these crazy pet owners understand the wild nature of their pets—and believe that just the right amount of TLC can turn their ferocity into daily cuddles. That said, here are the craziest pets that people actually own—straight from the wild and onto your screen. So read on, and wonder what life would be like with your very own hippo! And for more crazy pet stories, check out these 30 Funniest Celebrity Pet Moments. 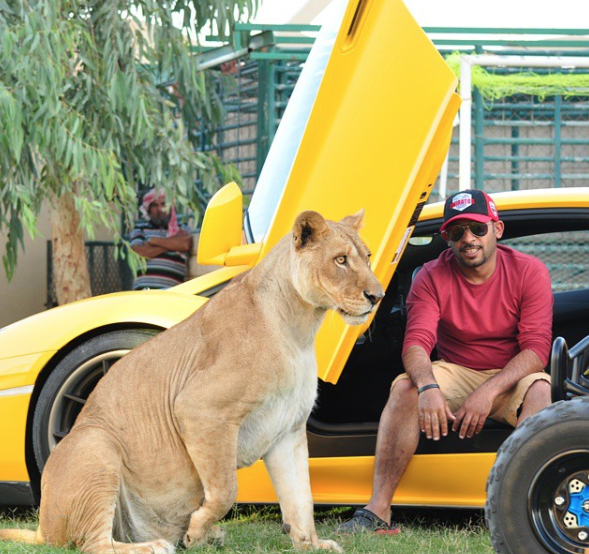 Humaid AlbuQaish, a billionaire playboy living in the United Arab Emirates, likes to collect exotic animals—and his Instagram is dedicated to showing off his latest playthings. From flamingos to cheetahs, this guy has an entire safari in his backyard. And for more crazy animal facts, check out The 20 Strangest National Animals. 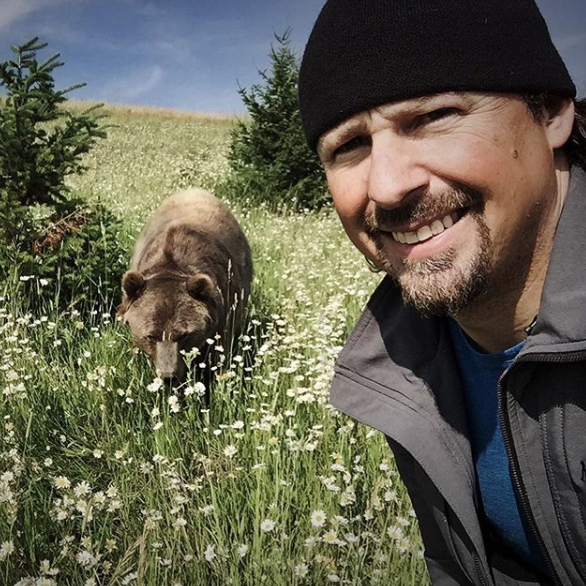 While most grizzly bears feel threatened by the presence of humans, this cuddly guy, named Brutus, follows his owner around everywhere. Brutus' owner and founder of the Montana Grizzly Encounter, Casey Anderson, says that his grizzly pal feels similar emotions to humans. "He just stood by me unconditionally and he listened to me and he was there when I was crying. It's truly what I needed from him. This relationship is a give-and-take." Aww.ae0fcc31ae342fd3a1346ebb1f342fcb

For a species proven to be hostile towards humans, Jessica the Hippopotamus is as docile and friendly as any domesticated dog or cat. Since finding Jessica in distress on the riverbank behind their South African property in 2000, Tonie and Shirley Joubert have been providing care to this giant pet. For more great animal coverage, don't miss these 40 Amazing Animal Facts! 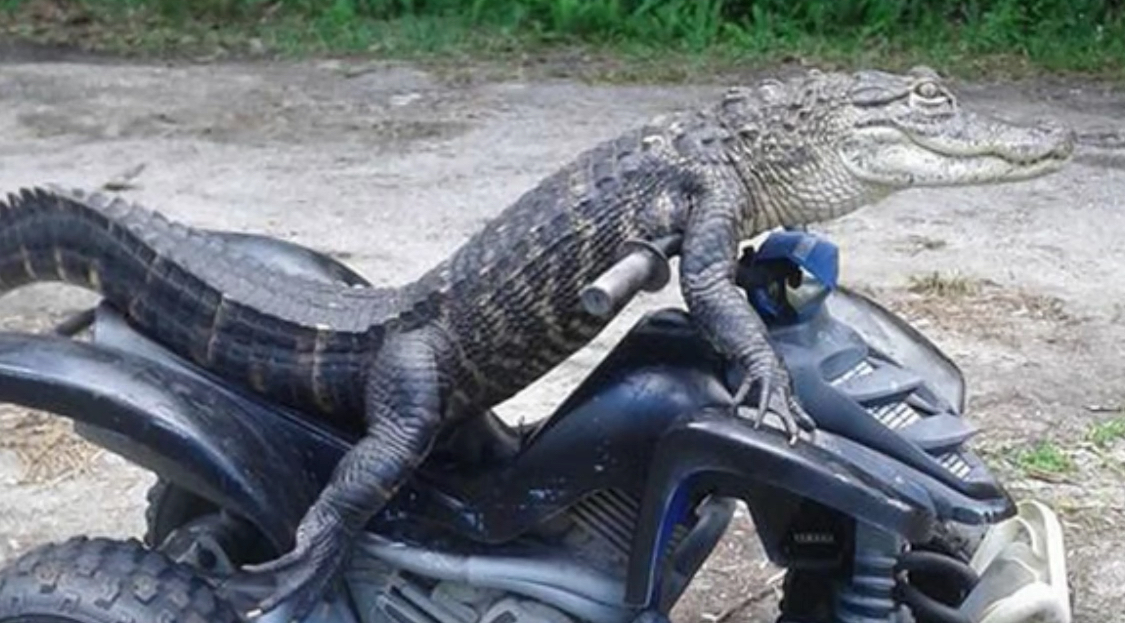 A woman in Florida adores her pet alligator, Rambo, so much that she dresses him up for every holiday—and even takes him for the occasional motorcycle ride. Mary Thorn, Rambo's owner, has even trained her pet gator not to bite and to keep his jaws clamped tight while others are around. And for more hilarious pet moments, check out these 15 Animals with Impressive Titles. 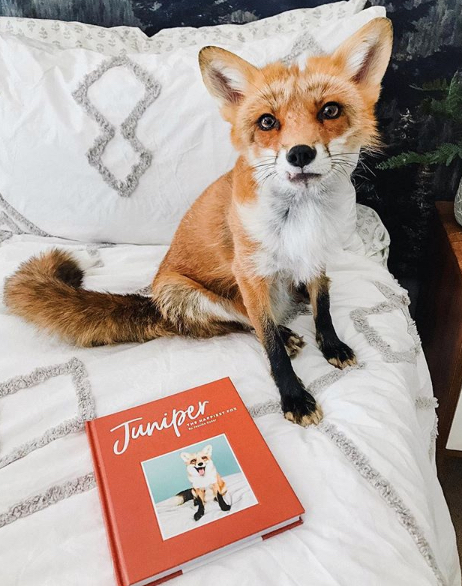 Juniper the fox is so famous that she has now gathered over 2 million Instagram followers—and for good reason. Unlike other wild foxes, Juniper is trusting and domesticated—though her owners admit that she still likes to dig and bite, which will undoubtedly never be bred out a foxes' true nature. 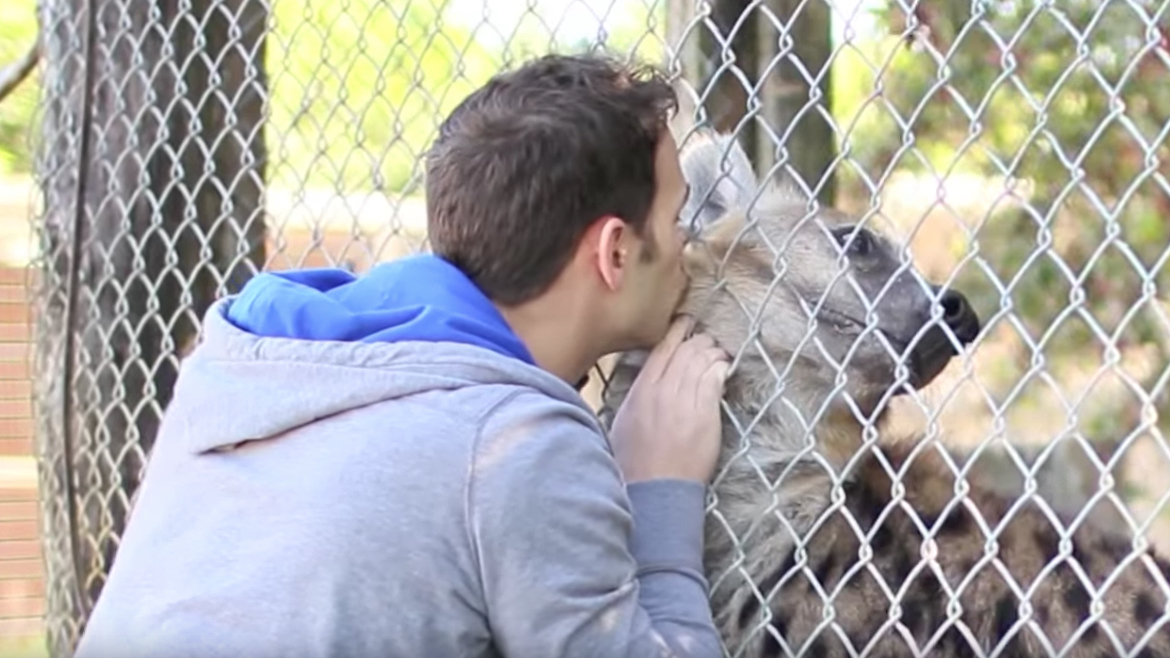 Bryan Hawn adopted his pet hyena, Jake, because other housepets bored him. He kept Jake locked up in his Miami, Florida apartment until finally realizing that his hyena needed a place to be free from the tiny dimensions of his home. Hawn eventually decided to take her to an exotic pet sanctuary—and in this heartwarming video, her owner surprised Jake on her fourth birthday—and you can tell just how much she missed him. 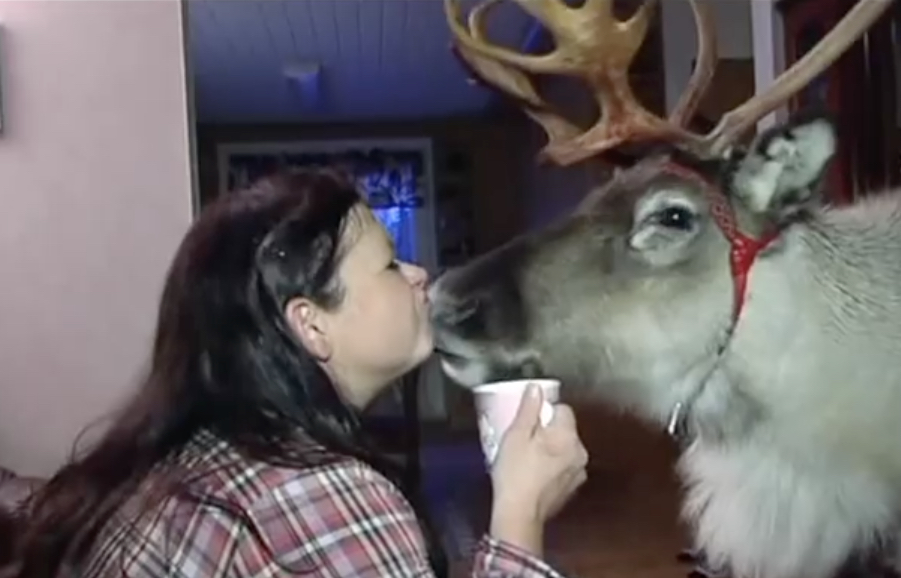 At the end of a long day, Aatu the reindeer just wants to sit down in an easy chair and watch his favorite show, Heartbeat—no, really. According to his owners, the Finnish reindeer acts more like a dog and enjoys eating dinner at the table with the rest of the family every night. World: meet the only reindeer with exceptional table manners. 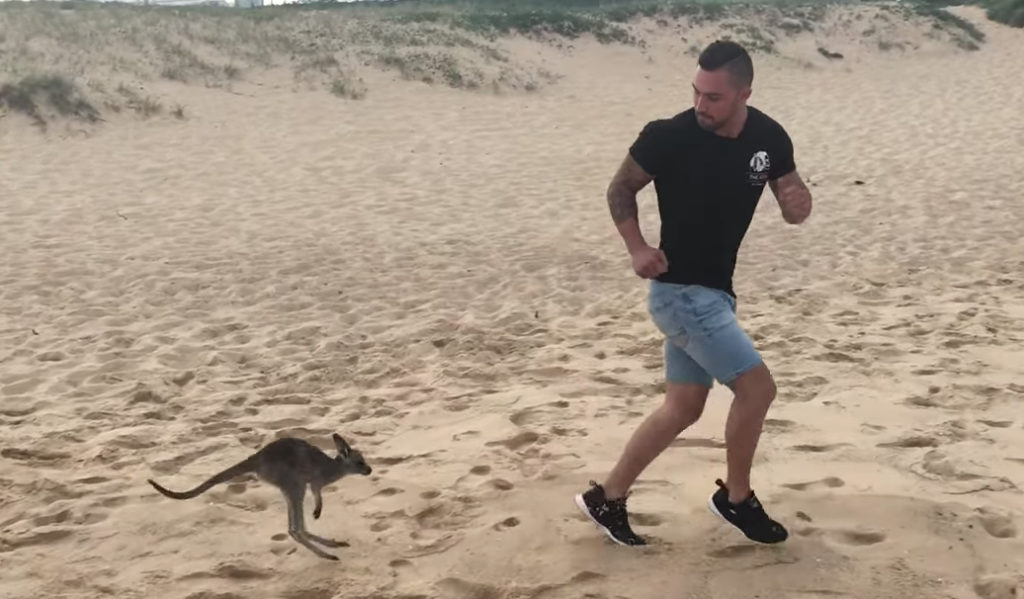 Damian the pet kangaroo loves to play tag—or maybe just enjoys chasing after his owner, Jackson O'Doherty. Though it's not advised to keep kangaroos as domesticated housepets, Damian seems intent on being his owner's best friend. 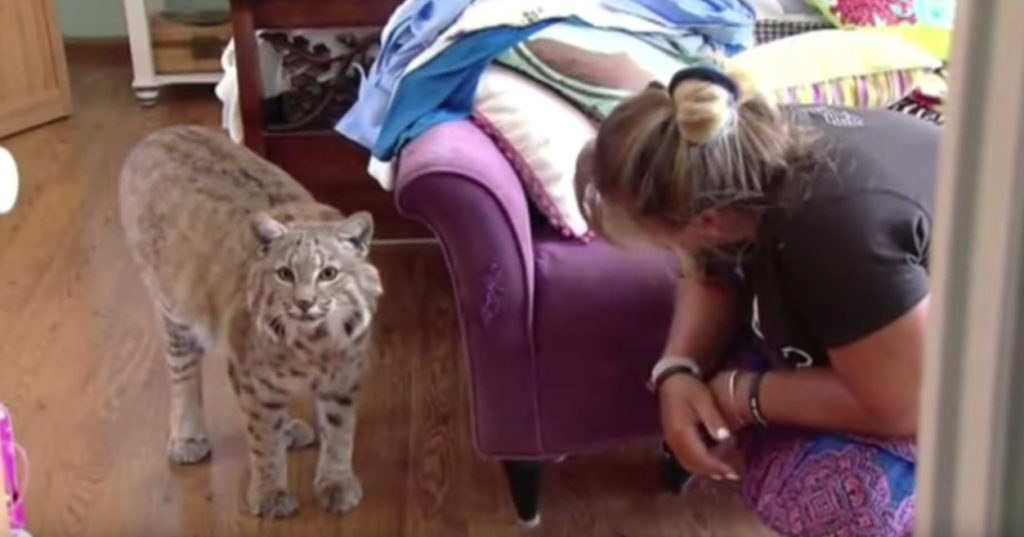 Rocky isn't just your typical cat, at 38 pounds of pure muscle and mischievous hijinks. Ginny Fine, the bobcat's owner, has made quite a stir in her New Jersey neighborhood, as Rocky thoroughly enjoys sneaking out of the house and wreaking havoc. As it turns out, Rocky may be closer to a teenager and much less like a house cat. 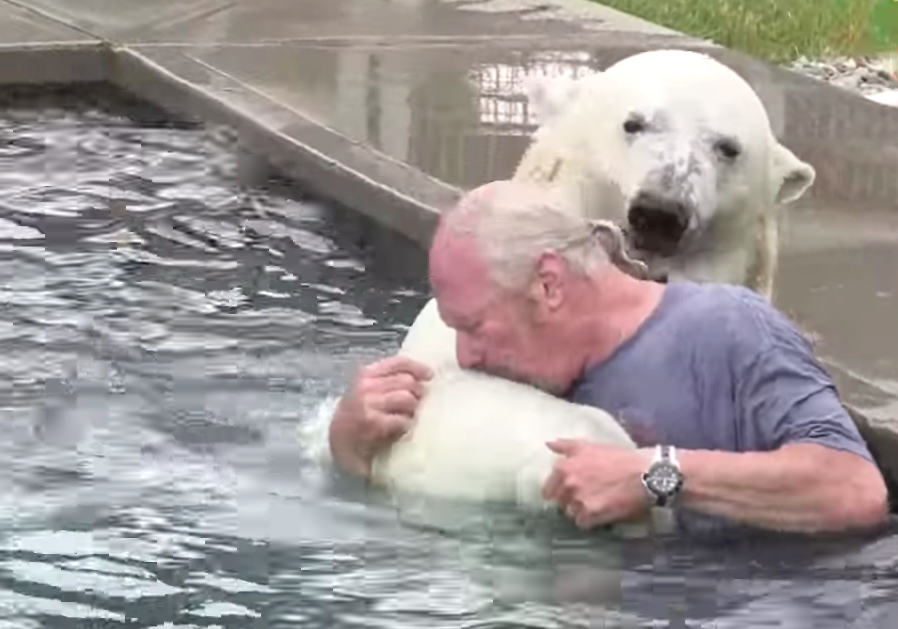 Cuddly polar bear Agee actually purrs when his owner, Mark Dumas, is around. According to Dumas, they bathe together, sleep together, and even wrestle—when the occasion calls for it. 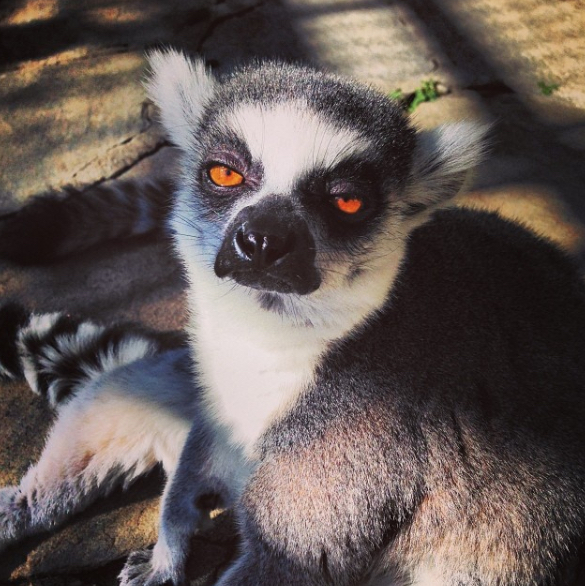 While actress Kirstie Alley fully acknowledges that it's not wise to attempt to domesticate lemurs, as they are incredibly rambunctious and suited for a warmer climate with a very specific diet, she proved to be no match against these cute faces. Today, Alley owns 14 lemurs—all living in cages on her property. 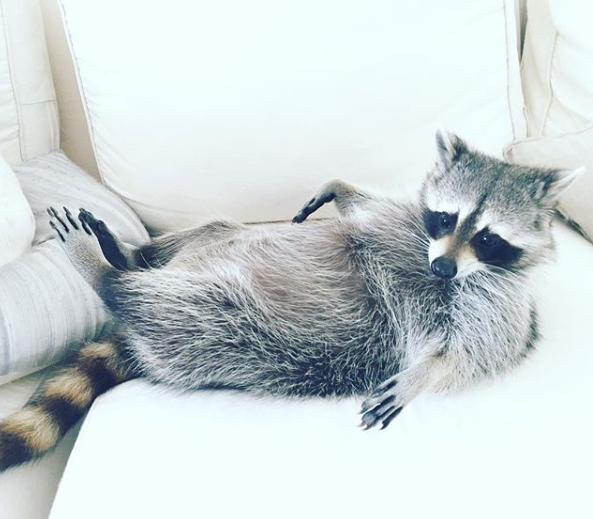 Pumpkin the raccoon is incredibly photogenic—a trait that might have contributed to her popular Instagram, now with over a million followers. Since her home in Nassau, Bahamas, didn't have anywhere to rehabilitate Pumpkin after she was separated from her mother, owner Rosie Kemp decided to swoop in and save the day. And from the content look on Pumpkin's face, we think she's more grateful than any other housepet could ever be. 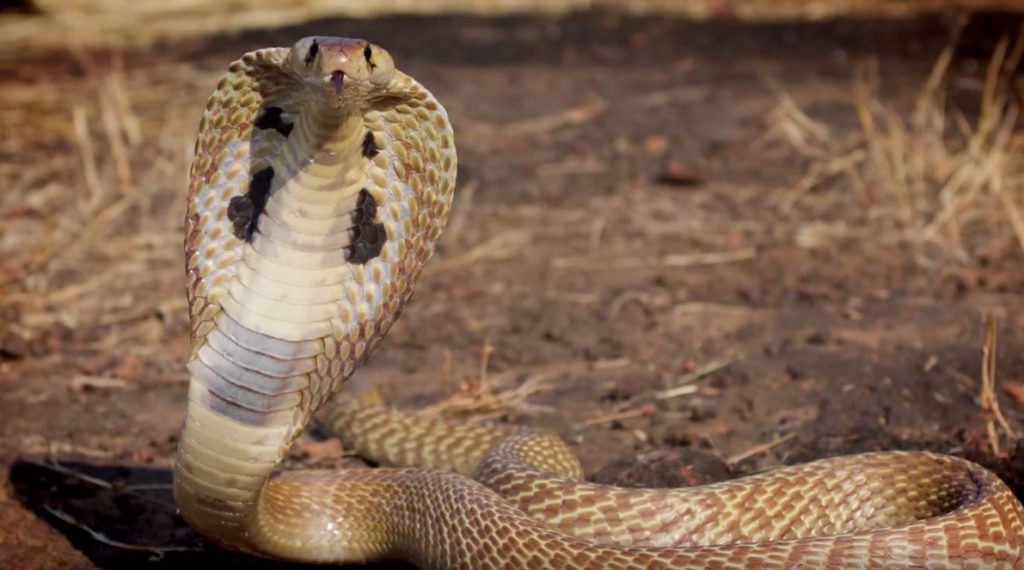 Allegedly, an actor purchased two albino king cobra snakes for protection—but where was his protection from the two snakes roaming around his property? 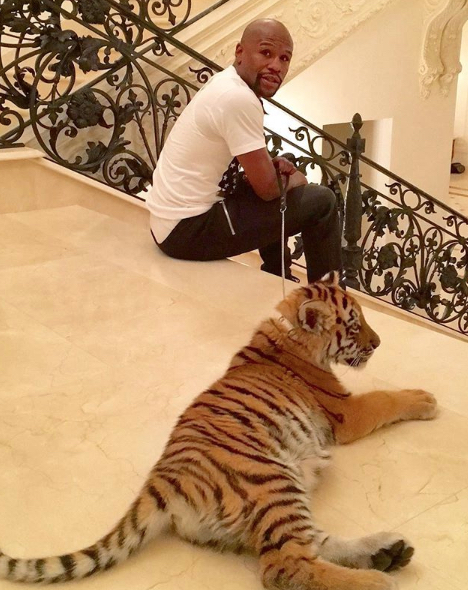 After a video surfaced showing boxer Floyd Mayweather struggling to control his pet tiger in a crowded hotel room, thousands of animal rights activists came to the defense of the tiger, claiming that the animal was being severely mistreated. If nothing else, this public struggle has communicated a sense of apprehension to others who may have underestimated the care these big cats need and desire. 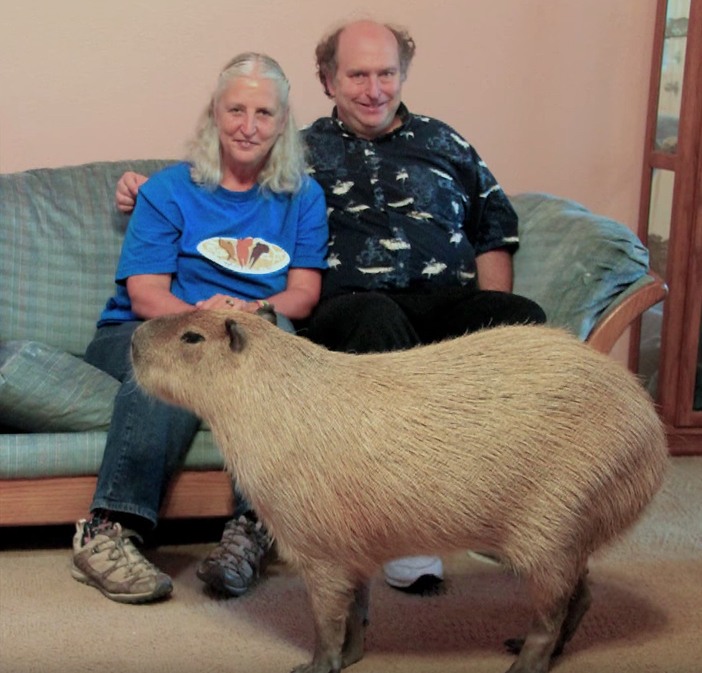 The world's biggest rodent has found its way into the hearts of owners Melanie Typaldos and her husband, Richard Loveman, in Texas. The capybara, named Gary, even has his own swimming pool in the backyard for the occasional afternoon cool-down. 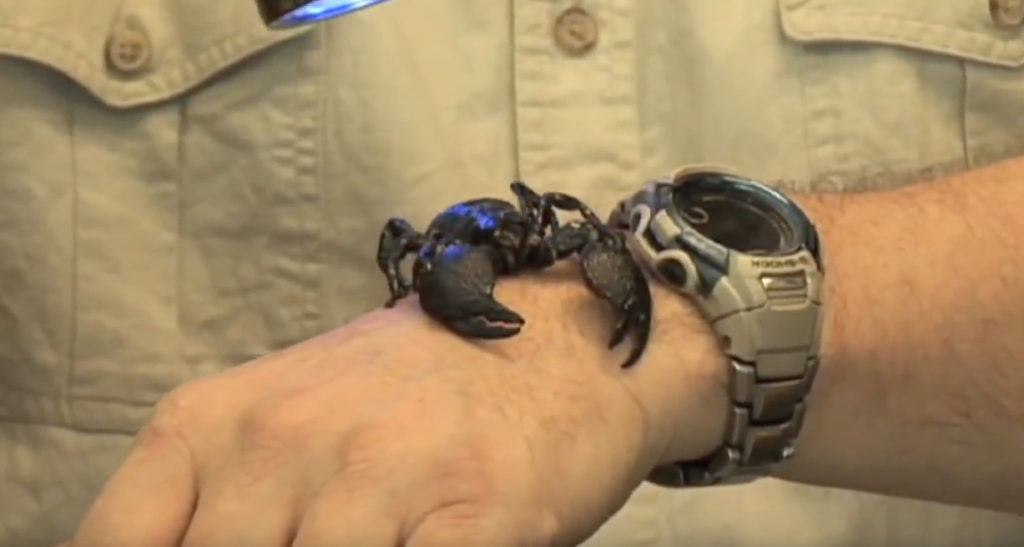 According to the Amateur Entomologists' Society, acquiring and caring for a pet scorpion, while rewarding, can be extremely dangerous if your supplier is not completely familiar with the variations between different species. Of the 1,500 species of scorpion, about 100 of them carry a sting that can seriously harm a human, yet the adoption of these critters has become increasingly more popular in the last decade. 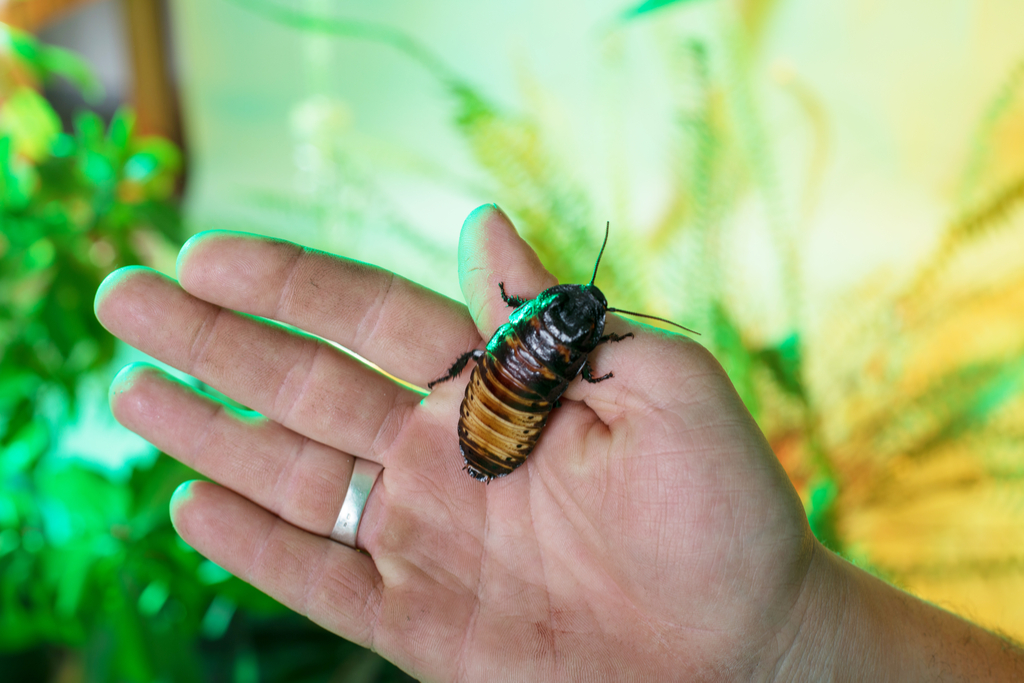 According to this Newsweek article, Madagascar hissing cockroaches are increasing so much in popularity that pet retailers like Petco are beginning to sell them regularly (some for only $5.95 per roach!). Entomologists also argue that giving a child one of these cockroaches is very safe and can actually help them overcome their fear of bugs. 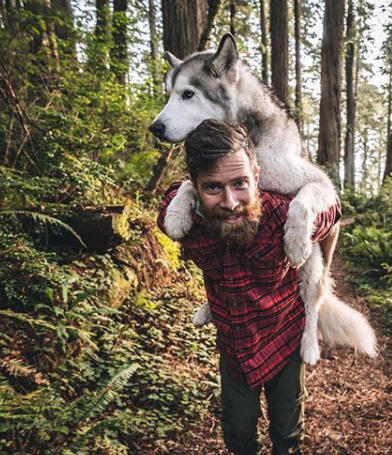 Loki the wolfdog has singlehandedly proved that a little bit of wild can actually be quite an endearing quality in your canine pal. Along with his owner, Kelly Lund, Loki has traversed the globe, one paw in front of the other, in search of endless adventure. 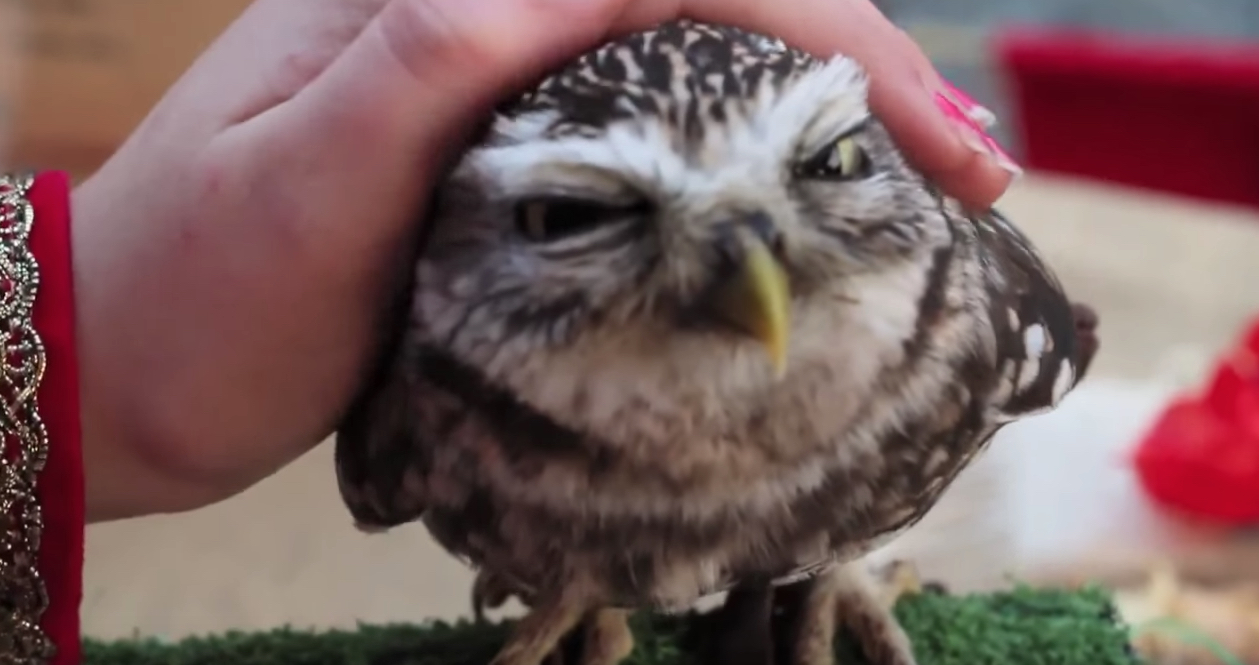 After Hedwig the trusty owl warmed our hearts in the Harry Potter series, it seemed as though everyone else wanted their very own spirited sidekick. Though Molla is far from sidekick material, we still love the way she looks so content while her owner pets her head. 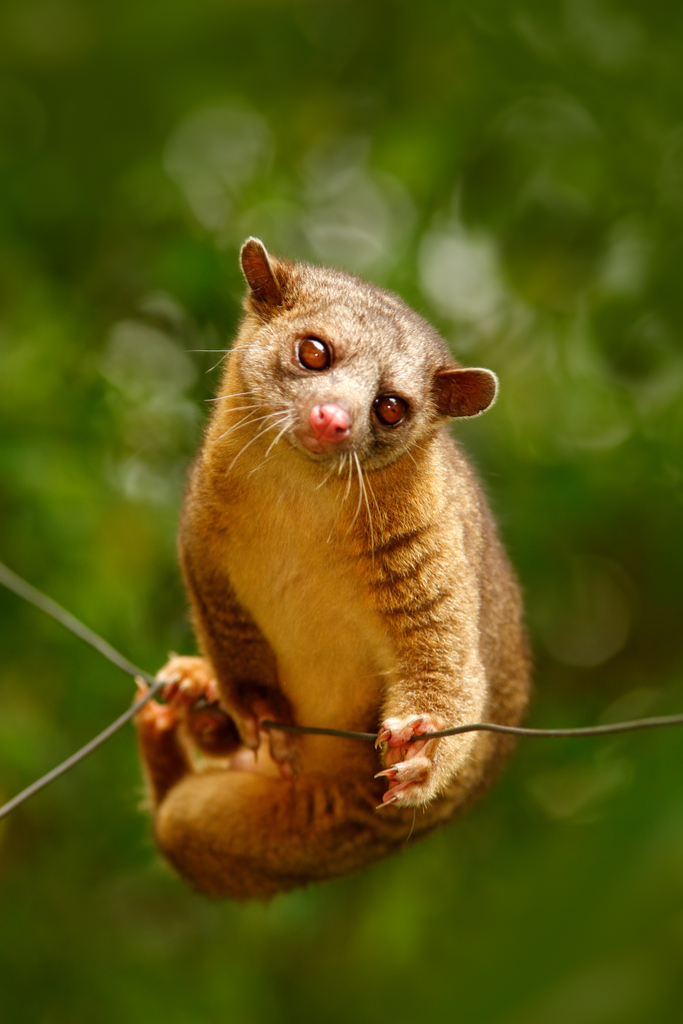 Even the millionaire princess Paris Hilton couldn't contain her pet kinkajou—meaning that no, you really should avoid attempting to tame these wild, tricky creatures. And for more crazy pet facts, check out these 30 Surprising Ways Your Cat Communicates With You.