The most distinguished dogs, cats, goats, bears, horses, and penguins to ever walk the planet.

Any dog owner thinks their pup is the cutest the world has ever seen, and every cat parent believes they have the sassiest feline on earth. But some animals have actually climbed the ranks to superlative places with stories so unbelievable, you'll think Hollywood made them up. Really, when you stop to think about it, with their discipline, loyalty, and total lack of ulterior motives, it's no wonder that so many animals have such impressive titles, managing to win elections over human candidates and outranking men in service.

From the feline stationmaster who brought in millions of dollars to a small town in Japan to a bear who fought the good fight in World War II to a beer-guzzling line of goat mayors in Texas, here are some animals whose stories will make you think, "Why do we even vote for humans anyway?"

In 1997, Lauri Stec, the manager of Nagley's General Store in Talkeetna, Alaska, found a box of kittens up for adoption in her parking lot. She picked an adorable ginger-haired one and named him "Stubbs" because he had no tail. To honor his integrity (and to protest the human candidates), the citizens of Talkeetna chose Stubbs as their mayor, a position he served honorably for the next 20 years up until he died of natural causes in July 2017.

In 1972, Major Nils Egelien, a lieutenant of the Norwegian King's Guard, decided to adopt a king penguin at the Edinburgh Zoo; he named it Nils Olav in honor of himself and King Olav V of Norway. The penguin was initially given the title of lance corporal. Then he was promoted to sergeant shortly before his death in 1987.

He was succeeded by a two-year-old king penguin named Nils Olav II, who quickly rose up the royal ranks from regimental sergeant major to colonel-in-chief. In 2008, he became the first penguin ever to be awarded knighthood by the Norwegian Army. The Norwegian king, King Harald V, even attended the ceremony, declaring that Nils had shown himself "in every way qualified to receive the honour and dignity of knighthood."

Sometime after his knighting, Sir Nils died and was replaced by yet another lookalike penguin, who earned a new landmark honor. In 2016, Nils Olav III was promoted to brigadier, and thusly, he became the world's highest ranking penguin.

In the small Japanese city of Kinokawa, there was once a female tabby cat who operated the local Kishi Station. Born as a stray in the area in the mid-'90s, she quickly warmed the hearts of daily passengers, as well as the informal station manager, Toshiko Koyama, who decided to adopt her and name her Tama.

When financial problems arose, the citizens rallied to prevent Kishi Station from getting shut down, and officially named Koyama the station manager and Tama the stationmaster. Armed with a cap and a stationmaster's noble badge, Tama greeted passengers and wished them a pleasant journey up until her death in 2015 at the age of 16.

Tama essentially saved the station from ruin, leading to a 10 percent increase in passengers in her first year, and contributing an estimated 1.1 billion yen (around $10 million USD) to the local economy overall, according to Wired. Not too shabby for a stray tabby!

4
Larry, Chief Mouser to the Cabinet Office of the United Kingdom

Ever since at least the 1920s, there has been a cat residing at the 10 Downing Street, whose official title is Chief Mouser to the Cabinet Office of the United Kingdom of Great Britain and Northern Ireland.

While the incumbent chief mouser may share the home of the incumbent prime minister, he or she does not belong to the presiding PM. Throughout the history of the position, there have been long gaps where no cat was fulfilling the role, the most notable one being from 2009 to 2011, when rats could be seen scurrying around 10 Downing Street during television reports.

At the time, Prime Minister David Cameron said there were "no plans" to appoint a new chief mouser, but, compelled by a strong pro-cat faction in his party, in 2011, he gave the position to Larry—a cat that he and his family adopted from Battersea Dogs & Cats Home. Poor Larry soon found himself to be the victim of nepotism, however, as he was sacked in favor of Chancellor George Osborne's tabby cat, Freya. An entitled and inefficient feline, she was soon exiled, and Larry has since regained his proper place at 10 Downing Street, where he still remains as of Feb. 2020.

Bosco Ramos was a black Labrador retriever and Rottweiler mix who defeated two humans to win the honorary mayoral election of the unincorporated community of Sunol, California, in 1981. He served the town valiantly until his death in 1994, and a statue of him was erected in front of the Sunol Post Office in 2008.

The tradition of having goats in the British military dates back to American Revolutionary War, when a goat wandered onto a battlefield in Boston and led the Welsh army in the Battle of Bunker Hill. Another goat, Taffy IV, served so bravely in the First World War that he was posthumously awarded several medals of honor.

Years later, in 2001, a cashmere goat born in a zoo named William "Billy" Windsor—who descended from the same royal bloodline as the original herd—became a ranking member of the regiment. In 2006, he was briefly demoted from lance corporal to fusilier, for embarrassing the army by failing to keep in step and trying to head butt a drummer during a parade celebrating Queen Elizabeth II's birthday. After months of good behavior, he was reinstated as lance corporal before retiring from his post in 2009 and ending his days in peace. A baby cashmere goat named William Windsor II was chosen soon thereafter to keep up the tradition.

In the spring of 1942, Polish soldiers who had left Russia for Iran came across a brown bear cub for sale at a railroad station. They bought him, named him Wojtek, and raised him in their refugee camp, where they fed him condensed milk from an old vodka bottle, gave him cigarettes (which he ate), and rewarded his good behavior with his favorite drink: beer.

As a well-trained soldier, Wojtek learned how to salute when greeted, and could often be found wrestling with his fellow soldiers. To get him onto a British transport ship when the unit was sent to fight alongside the British in Italy, he was named a private, one with his own playbook, rank, and serial number. During the Battle of Monte Cassino in Italy in 1944, he helped moved crates of ammunition and kept up company morale. Following Allied victory, he lived out the rest of his days at the Edinburgh Zoo. A war hero and legend, statues in Wojtek's honor can be found in Krakow, London, and Edinburgh, among other places.

The folks of Cormorant, Minnesota, had a Great Pyrenees named Duke as their mayor for about four years. He won in 2015 in a landslide election after running on a platform promise of cuddles for all, then again in 2016, 2017, and 2018. "He just kind of hangs out at the local pub and makes sure everything is runnin' OK and keeps the riff-raff out and just oversees the whole works," Steven Sorenson, Duke's deputy mayor, told the Australian Broadcasting Corporation in 2018.

9
Nemo, the German shepherd hero of the Vietnam War

Nemo was a German shepherd who served in the United States Air Force during the Vietnam War. When his base fell under attack by the Viet Cong in the early hours of Dec. 4, 1966, he attacked the enemy, losing an eye and suffering a gunshot wound to the nose in the process. Despite his injuries, he crawled across the body of his human, Airman Robert A. Throneburg, and guarded it until medical help arrived. He survived, earning two Purple Hearts and the Bronze Star Medal, and lived out his days on an Air Force base in the U.S.

In the '90s, people came from all over the States to the small town of Lajitas, Texas, to check out the beer-guzzling goat they had for a mayor. Elected in 1986, Clay knew how to beat the heat and mingle with the locals by knocking back a few at the saloon, where he is now immortalized in a mountain display. He was succeeded by Clay III, who didn't last too long in office either, and now, it's Clay IV, who also drinks wine coolers. (And to answer your obvious question: We're not sure what happened to Clay II, to be honest.)

Rabbit Hash, Kentucky, has a history of dog mayors. In 1998, a German shepherd named Goofy won the town's mayoral election after citizens bought ballots for a dollar a pop, voting as many times as they wanted as a fundraiser for the town's historical society. And clearly, they liked what they saw. Goofy's run was succeeded by a black Lab named Junior, a border collie called Lucy Lou, and now a pitbull mutt named Brynneth Pawltro holds the position she first won in 2016.

12
Sergeant Stubby, the dog hero of World War I

Another decorated war dog, Sergeant Stubby served in the U.S. 102nd Infantry Regiment in World War I, participating in 17 battles. A true hero, the Boston terrier saved his regiment from mustard gas, held down German soldiers who were running away, and found and comforted the wounded. His incredible story was told in the 2018 animated film called Sgt. Stubby: An American Hero, making him not just a war hero, but a movie star.

English springer spaniel Mildred Kerr Bush—or Millie, for short—not only has "first dog" on her resume, but also New York Times bestselling author. Millie is listed as co-author, with Barbara Bush, on 1992's Millie's Book, described as Millie's dictation to the first lady. Within the pages of the classic novel, Millie made sure to include her perspective on presidential proceedings as well as her musings on squirrels. She died in 1997 at the Bush Compound in Kennebunkport, Maine, but her legacy certainly lives on.

14
Chips, the most decorated dog of World War II 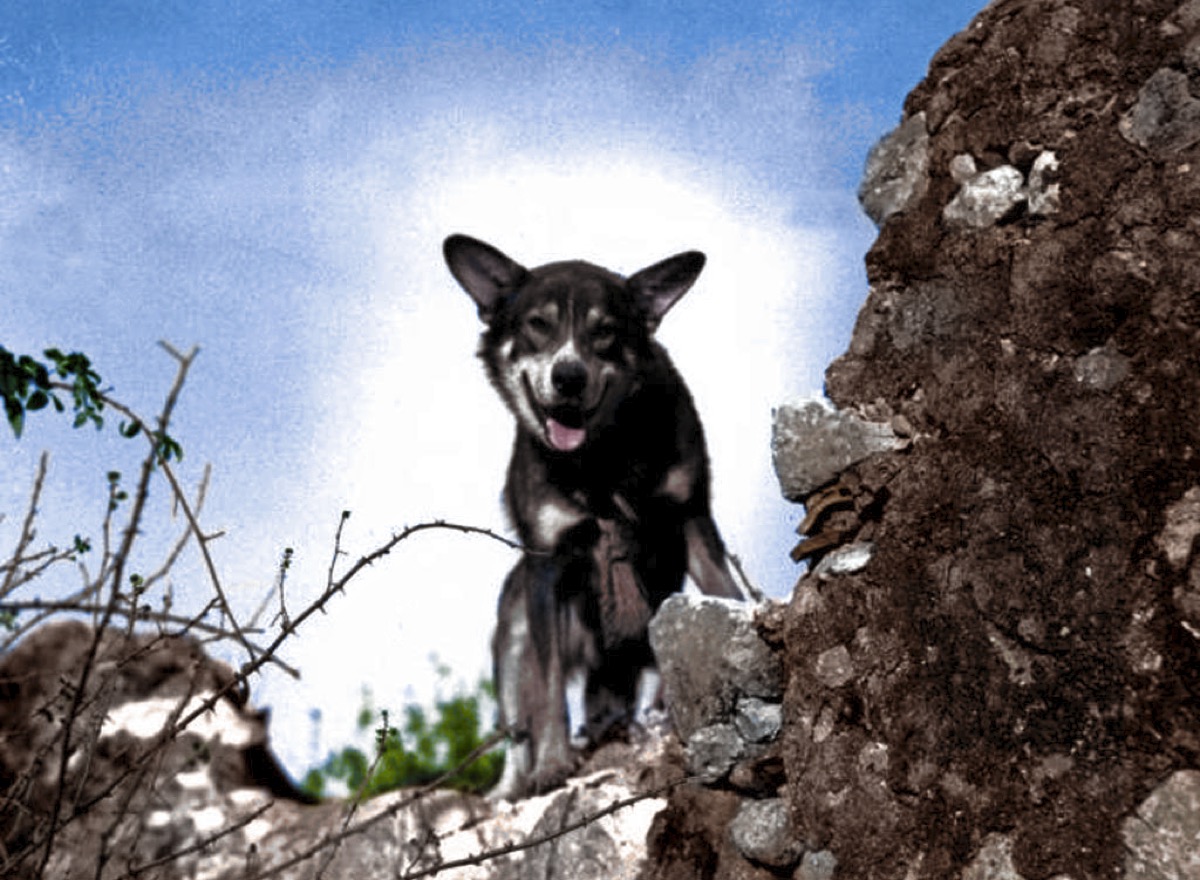 Chips was a trained sentry dog for the U.S. Army and the most decorated dog of World War II. This brave pup broke away from his handler and ran toward machine gun fire to attack a hidden German gun nest causing the opponents to surrender. As a result of his heroic actions, Chips—a German shepherd, husky, collie mix—was awarded the Distinguished Service Cross, Silver Star, and Purple Heart during his lifetime and the PDSA Dickin Medal posthumously.

15
Sergeant Reckless, a horse staff sergeant in the Korean War

Staff Sergeant Reckless was a Korean War hero whose most memorable moments came during the five-day Battle of Outpost Vegas when Reckless made 51 trips through no-man's land in one day alone, carrying 386 rounds of ammunition over the course of the battle. While Reckless was twice promoted to staff sergeant, she was also known among her fellow Marines as a voracious eater whose favorite meal was breakfast. And she would kick back with a beer every now and then, too.

Diana Bruk
Diana is a senior editor who writes about sex and relationships, modern dating trends, and health and wellness. Read more
Filed Under
Animals • Facts • Fun Facts • Pets • Trivia
Read This Next
Latest News
Read This Next