Photographic proof that penguins are the cutest creatures in the animal kingdom.

Penguins are not as black and white as they appear. There are 17 species of these beautiful birds of the sea, all of which exist exclusively in the Southern Hemisphere. Penguins also choose the same partner to procreate with season after season. And even though they have no visible ears, they have excellent hearing that they use to find their mates. Truly, they're a wonder, on top of being some of the cutest creatures in the animal kingdom. Herein, we've gathered the most stunning images of these animals in their natural habitats, from the frosty Arctic Ocean to the sunny shores of South Africa. These gorgeous penguin photos will take your breath away. 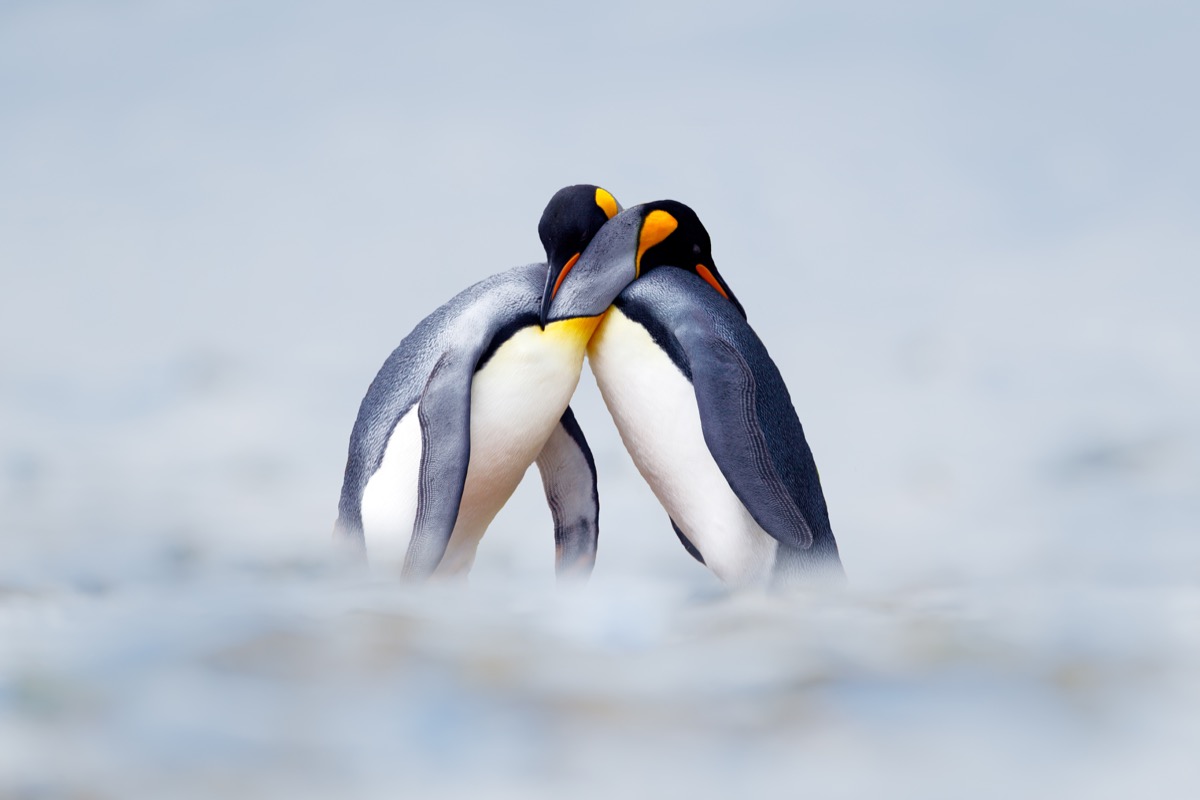 King penguins, like the ones pictured here, have the longest breeding season of all penguin species, typically lasting 14 to 16 months in total. Once king penguins find their mate, they stick with them, as this adorable embrace proves. 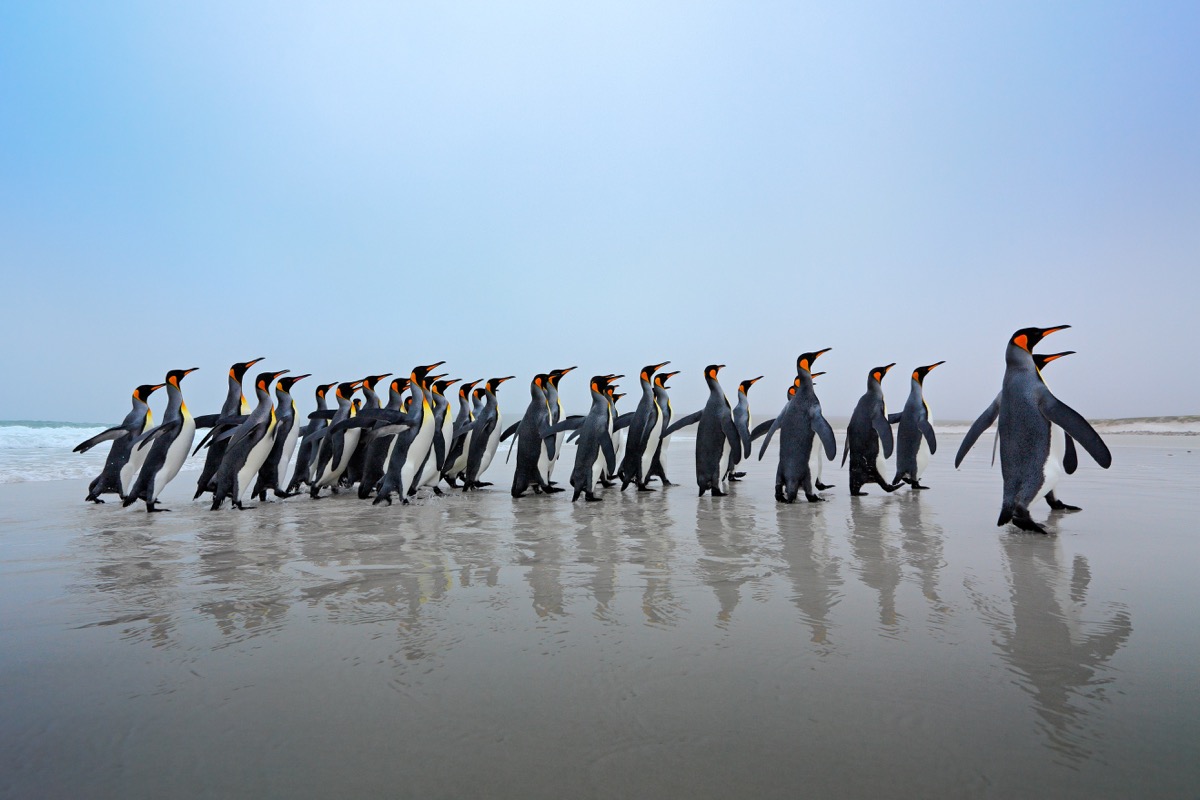 When king penguins have fledged fully (meaning that they can swim and have shed their juvenile fluffy brown coat), they leave their colony. The penguins return three years later to breed—and will make this pilgrimage numerous times throughout their 20 or more years in the wild. 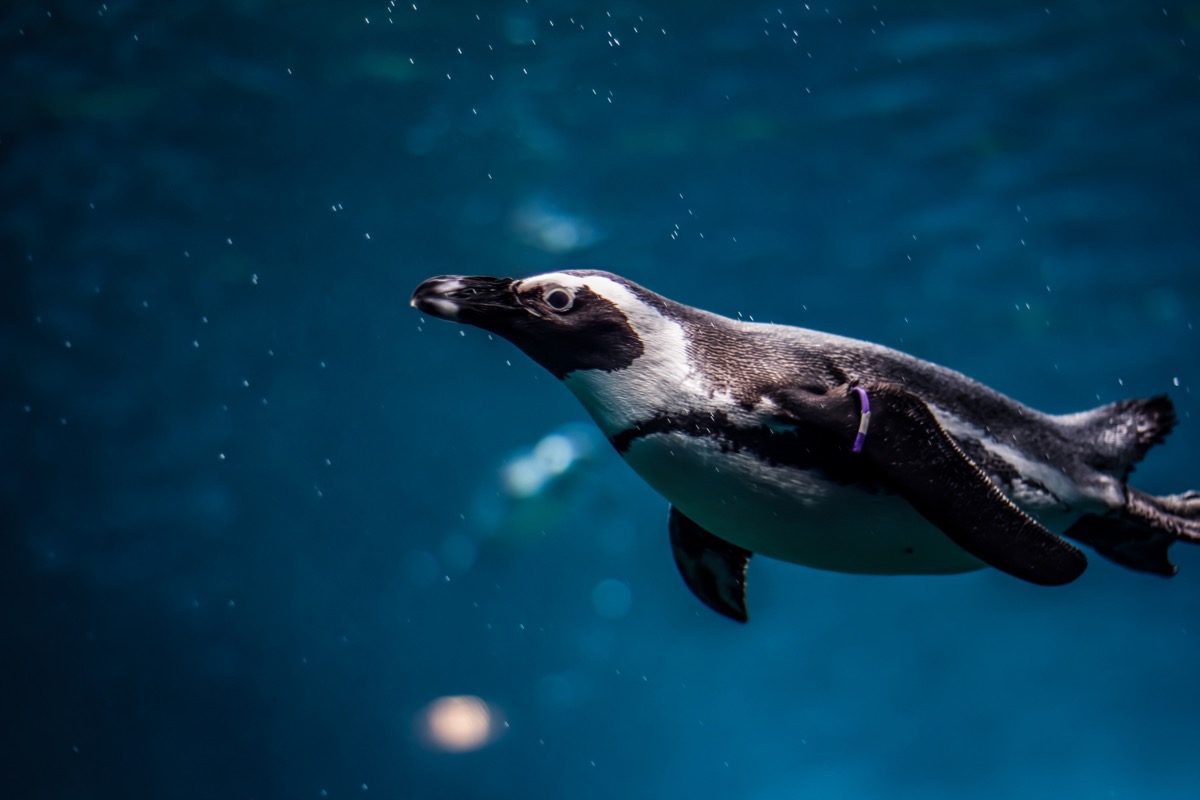 African penguins (like the one pictured here) are the only penguin species found in South Africa. Since their habitat can get quite warm, they spend most of their days cooling off in the water.

African penguins can dive to a depth of nearly 330 feet in a matter of 50 seconds—and can stay underwater without oxygen for as long as two and a half minutes.

The most abundant species of penguin in Antarctica is the chinstrap penguin (pictured here), named after the black band that sits beneath their throats.

What is perhaps most impressive about this species, according to National Geographic, is the sheer size of their colonies. The largest chinstrap penguin colony is on the uninhabited South Sandwich island of Zavodovski, where an astounding 1.2 million breeding pairs live. 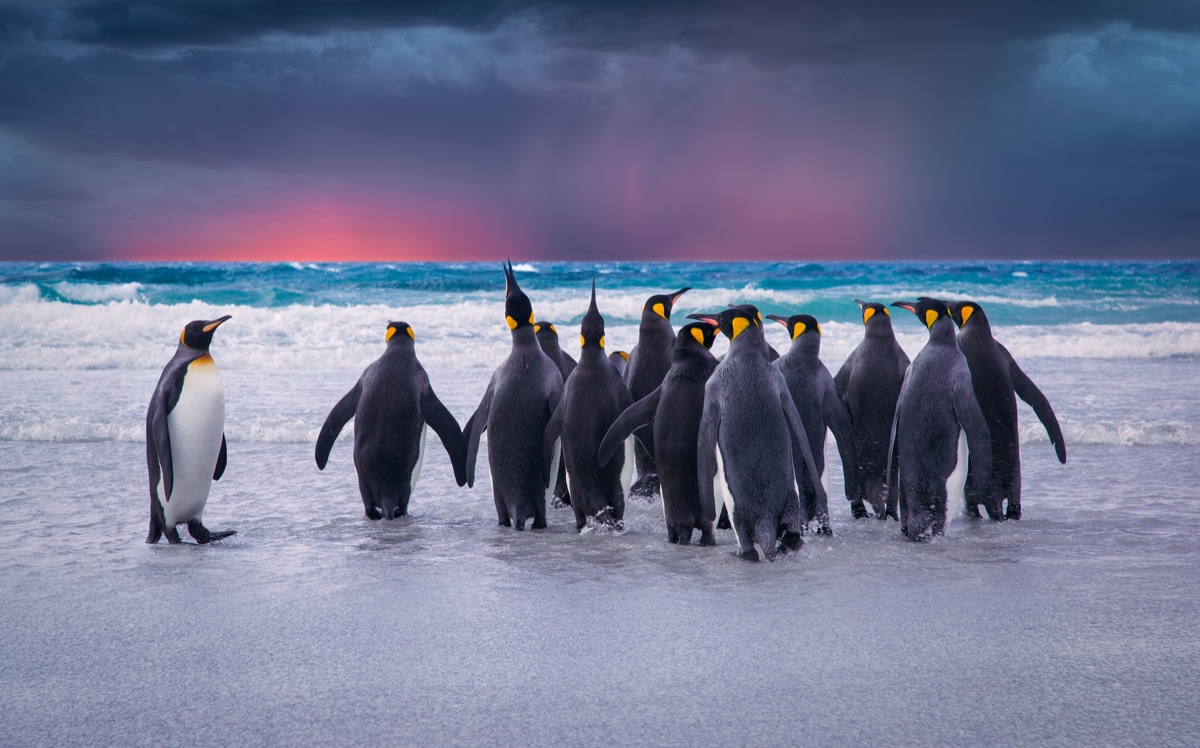 The Falkland Islands are home to more penguins than people, making it a truly magical destination. 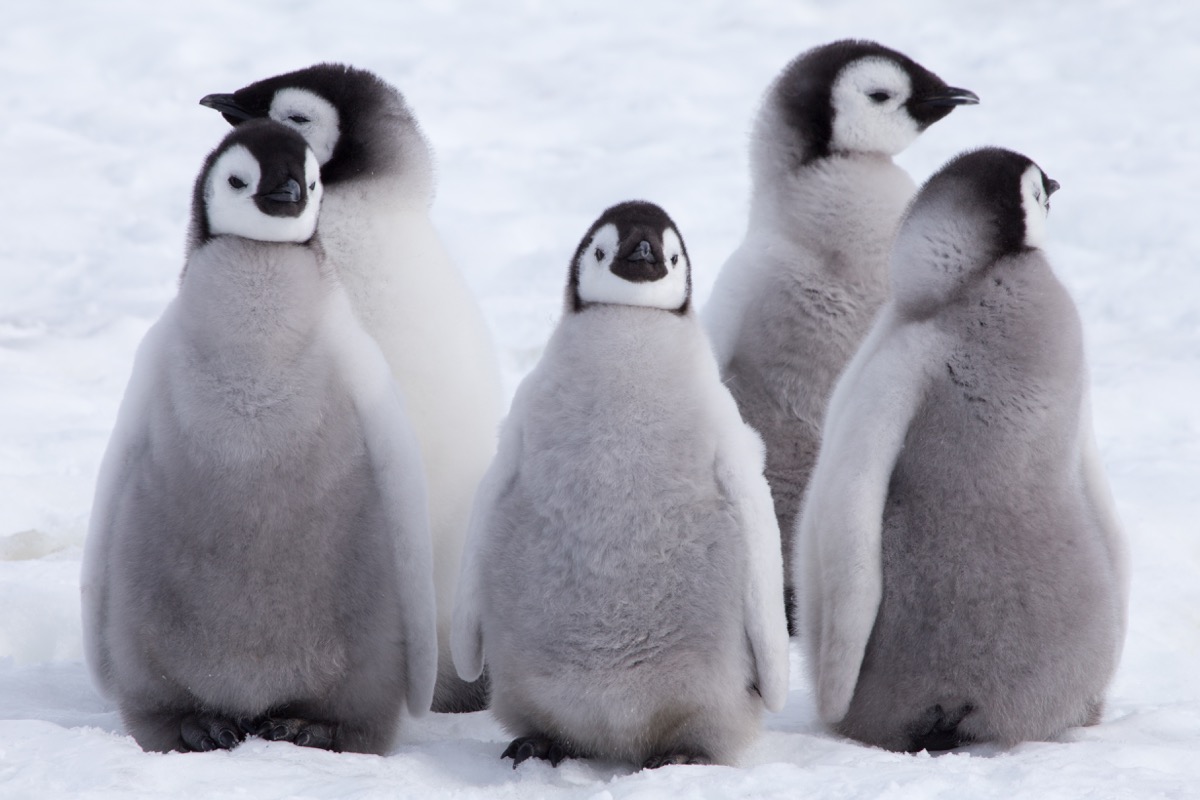 These emperor penguin chicks, huddled together for warmth, are referred to as a crèche. As the chicks age, their parents feel more comfortable leaving them on their own in these groups.

According to National Geographic, crèches are a typical sight during late autumn and early winter months when the penguin parents have to gather food. Then, around December, when the warmer temperatures break up the ice that the chicks have been resting on, the youngsters are ready to venture out into the open waters. 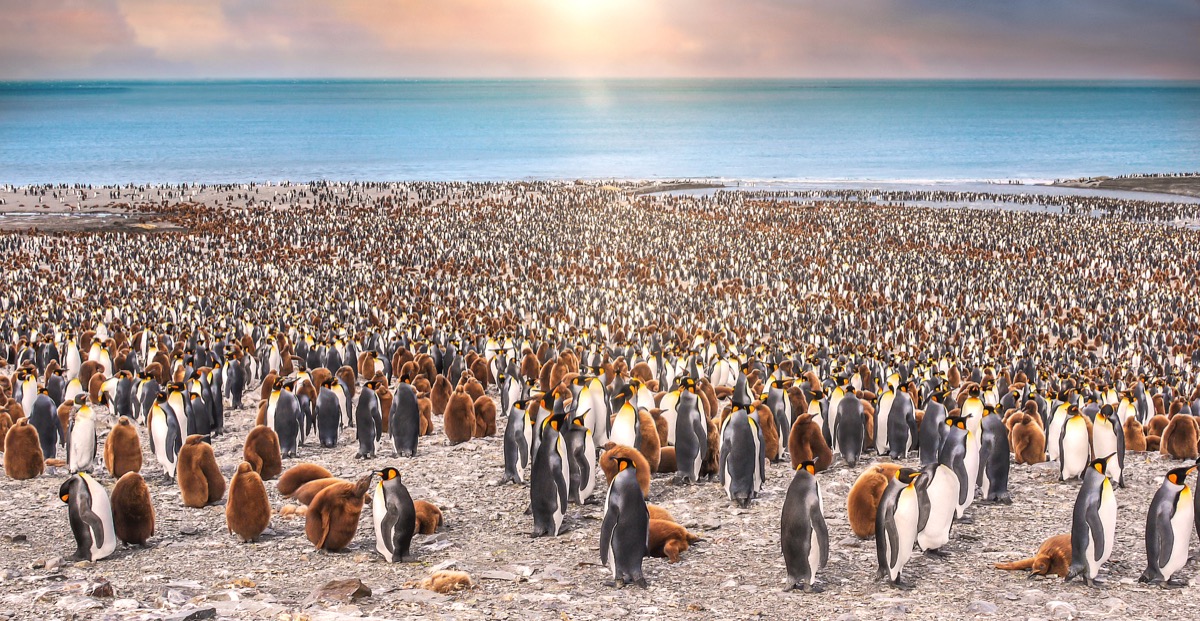 Famous for being the final resting place of famed explorer Ernest Shackleton, the remote island of South Georgia in the South Atlantic is also famous for its large population of king penguins.

Despite remaining close to the Antarctic Convergence, the waters surrounding St. Andrews Bay in South Georgia never freeze. That means the penguins don't have to migrate during the winter, which is why St. Andrews' shores are always packed full of king penguins, as you can see here. 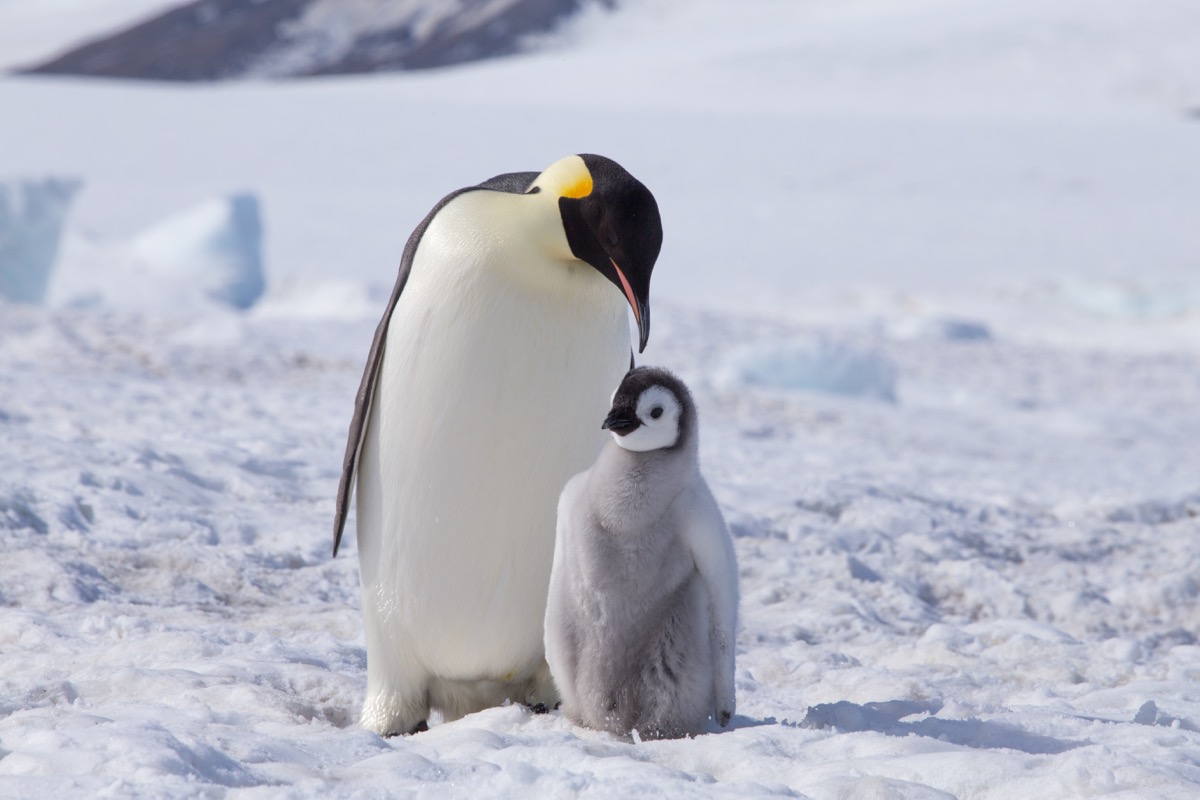 After a female emperor penguin lays a single egg, she'll then leave to go catch food for her family. The male penguin will protect the egg for the approximate 65 days it takes to hatch, keeping it warm with his "brood pouch," or warm layer of feathered skin near his feet. Then, according to National Geographic, right after the chick is born, the mother returns with enough food to feed her family. Could this proud penguin photo be any sweeter?

When they're traveling long distances, you'll often see penguins sliding across the ice on their bellies, like this emperor penguin at the Snow Hill colony in the Weddell Sea of Antarctica. Since penguins are only able to waddle with their short legs and webbed feet, this stomach slide, which is called tobogganing, is a faster, more efficient, and easier way for them to travel.

Gentoo penguins, who have orange beaks and dwell in Antarctica, form particularly long-lasting bonds, even sharing parenting responsibilities as soon as the female gentoo lays an egg. These two adorable gentoos are right out of a cinematic love story—standing on a rock, looking at each other, and holding wings. 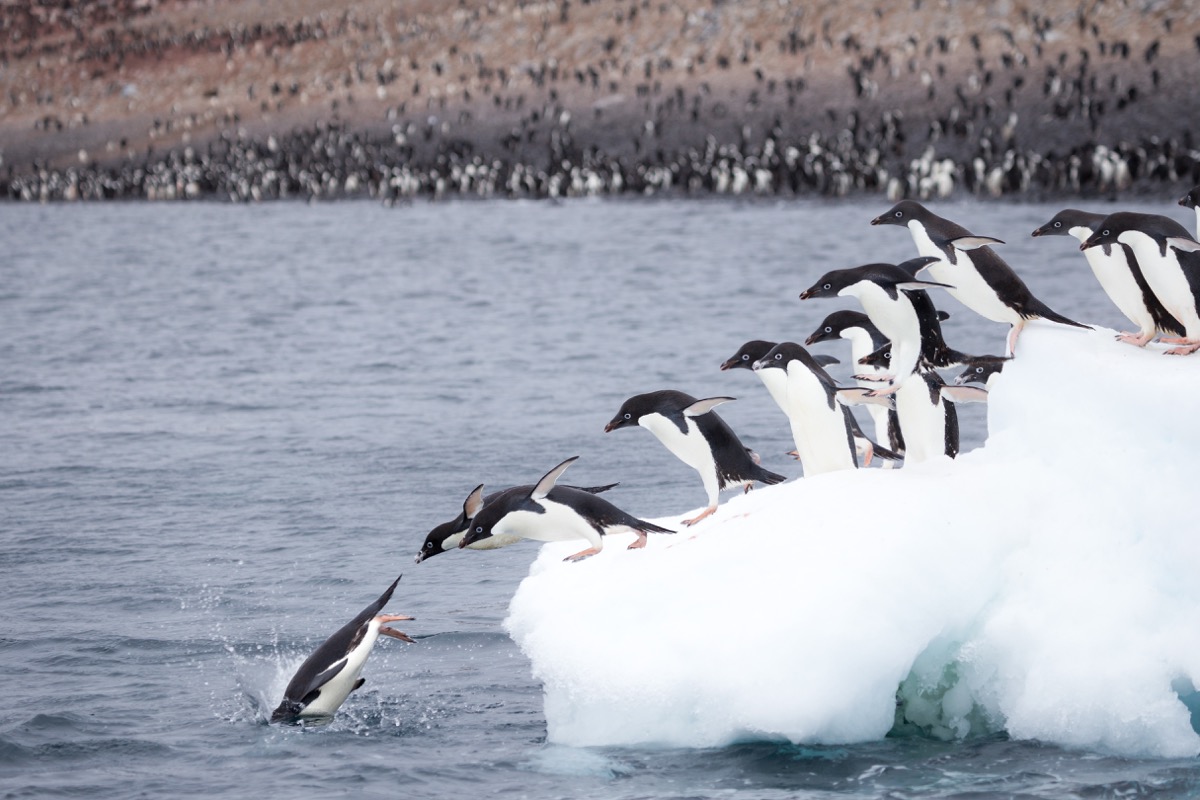 Adélie penguins are native to the coasts of Antarctica, and are named after the wife of French explorer Jules Dumont d'Urville, who first discovered this species of penguin back in 1840.

Unlike other species of penguin, the Adélie, which are particularly small, are objects of prey for leopard seals, giant petrels, and occasionally, even killer whales. But these Adélie penguins jumping in the water don't seem scared. 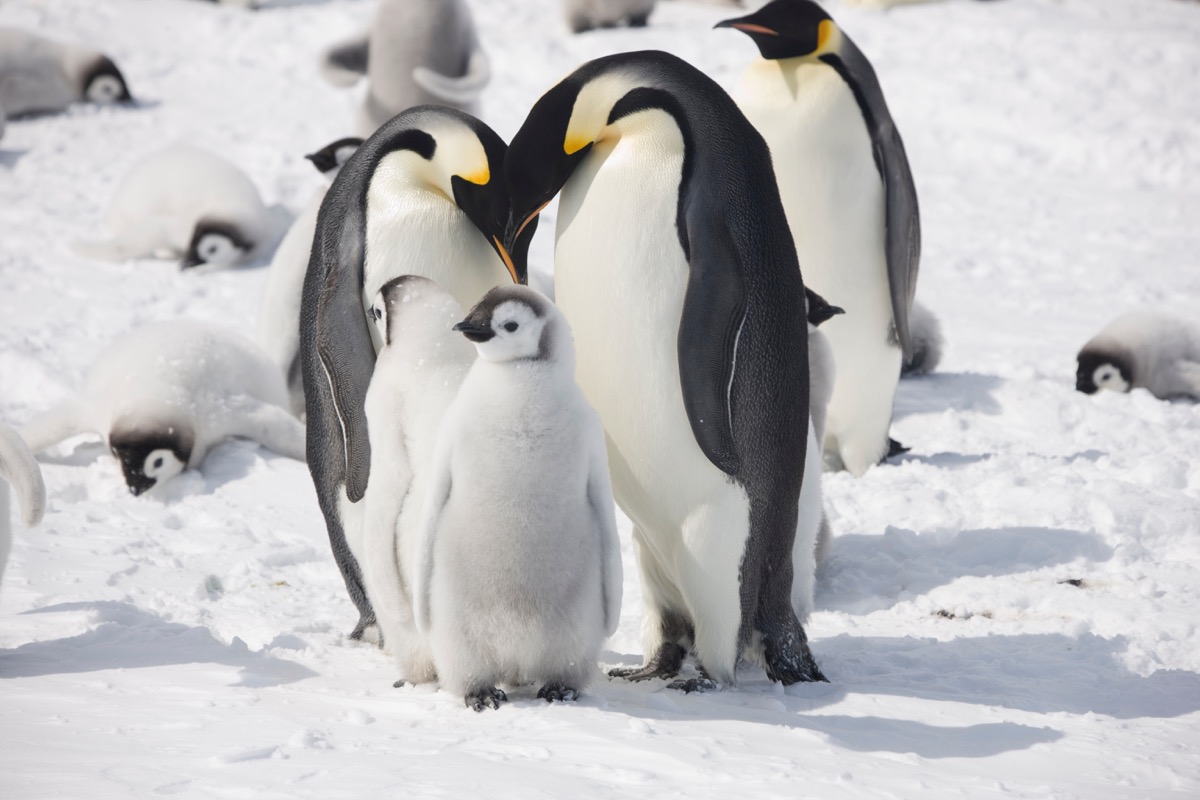 Both the mother and father emperor penguin dedicate their existence to providing food and shelter for their newborn, according to the Australian Antarctic Division. Look at these guardians, loving on each other and their precious chicks.

African penguins—pictured here in the Boulders colony of Cape Town, South Africa—are the third smallest penguin species. These little guys are also known as jackass penguins because they bray like donkeys. 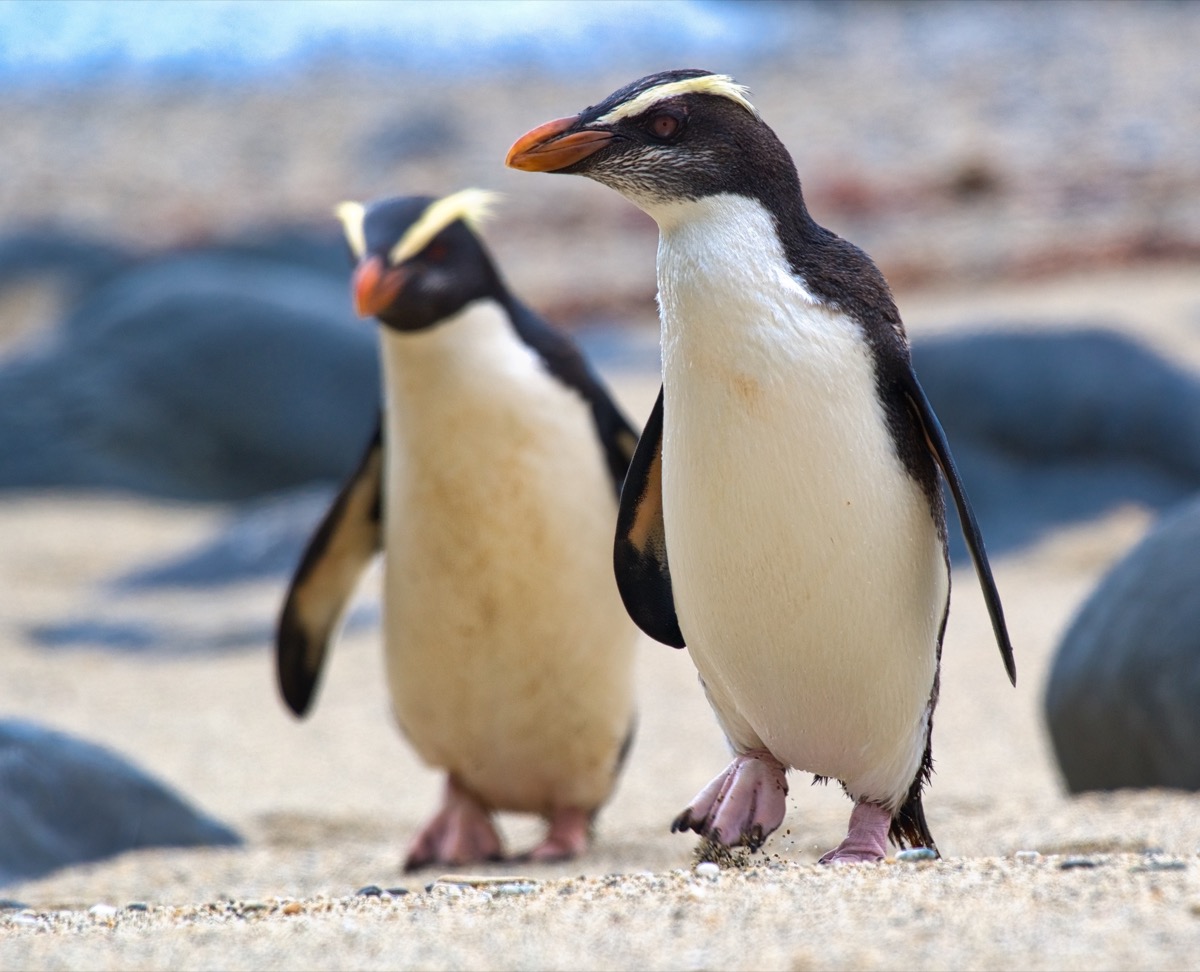 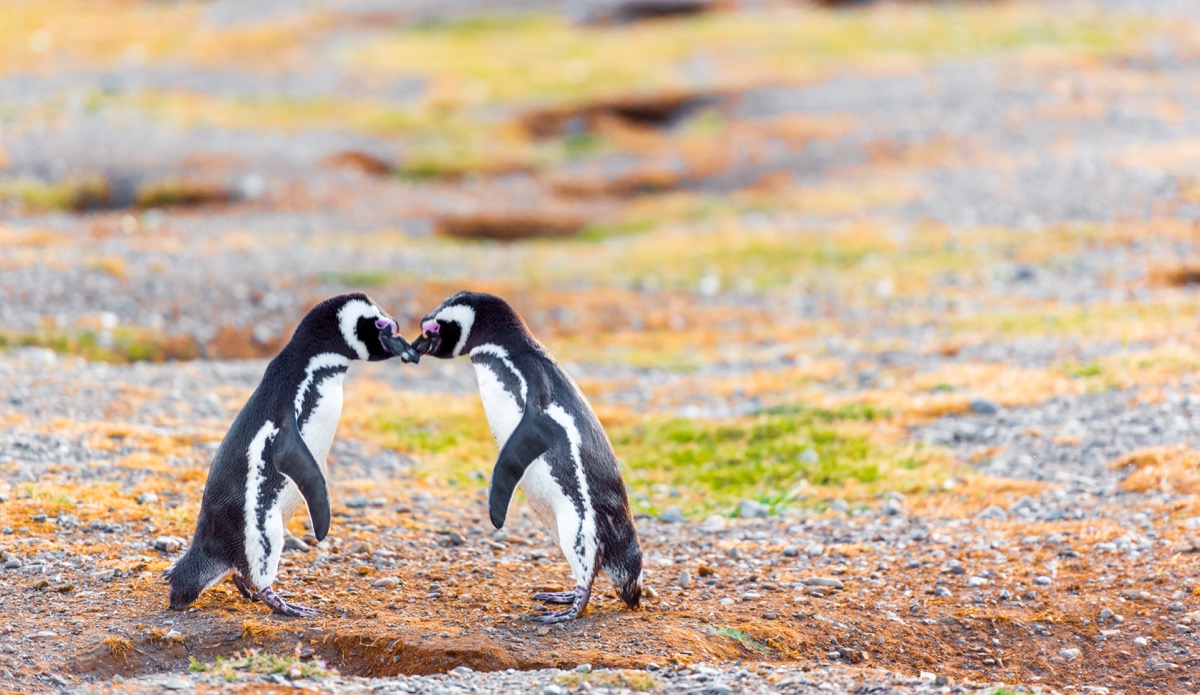 Named after the explorer Ferdinand Magellan, who first discovered this species of penguin back in the 16th century, Magellanic penguins are known for the distinctive white band that loops around each of their eyes and meets at their chins. These penguins live in the southernmost parts of South America and in the Falkland Islands. 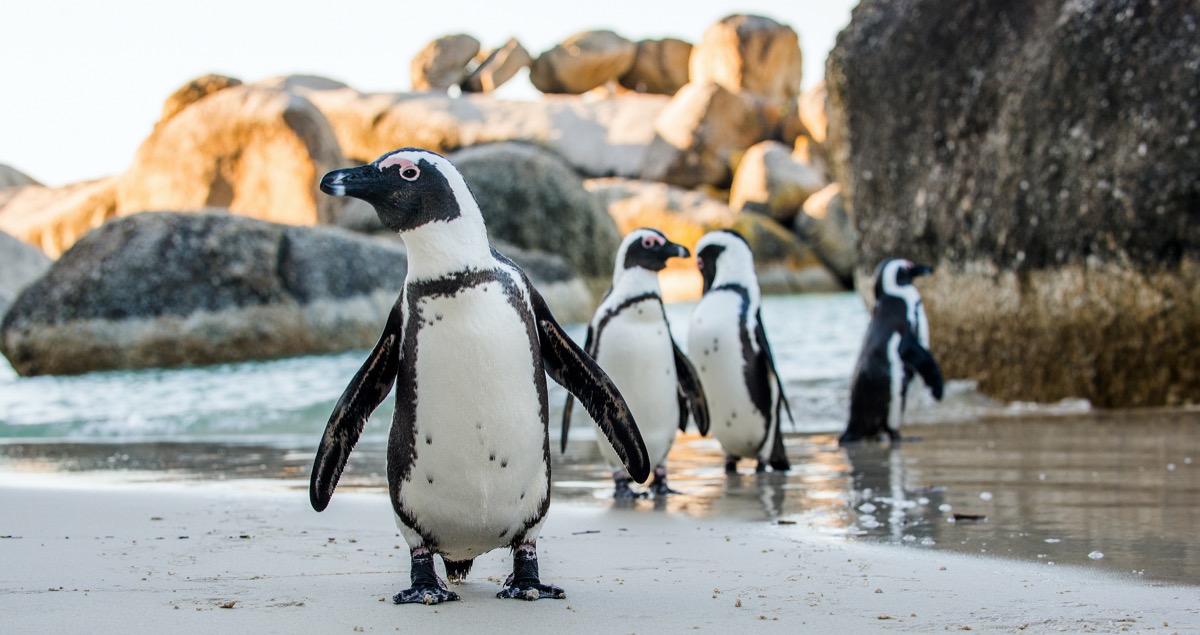 African penguins are equipped to deal with rising temperatures due to their habitat. They lack feathers on their legs and have patches on their faces that allow any excess heat to escape—keeping them cool constantly. 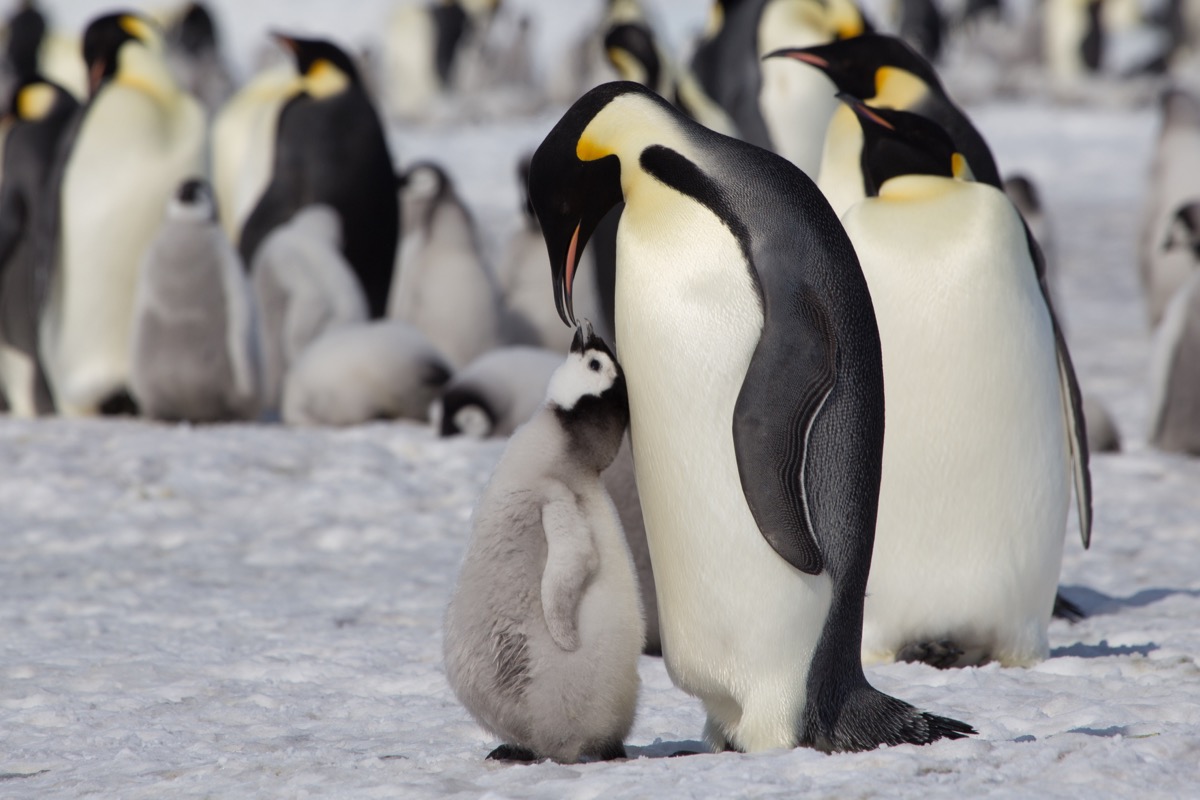 After traveling upwards of 125 miles to find a plentiful amount of food for her newborn, a female emperor penguin must locate her mate and child back home at the colony. According to PBS, the female penguin has a unique call that she lets out to find her partner so that the family can be reunited successfully. And for more on the animals of the Arctic, check out these 15 Amazing Facts About Polar Bears.

Ashley Moor
Ashley hails from Dayton, Ohio, and has more than six years of experience in print and digital media. Read more
Filed Under
Animals • Fun Facts • Trivia
Read This Next
Latest News
Read This Next