Building-sized jellyfish? No thanks!

Though scientists have only explored five percent of the world's oceans, they've already discovered, according to the World Register of Marine Species, nearly 230,000 various nautical creatures, with still new ones identified every year. And while some of these animals—like dolphins and whales—have given us everything from Hollywood blockbusters to IRL medical advances, other ocean dwellers have brought us nothing more than fear and fatalities. And no, we're not talking about sharks.

Take the fearsome stonefish, for instance. This rock-resembling creature has a sting that one man described as feeling like "hitting your toe with a hammer and then rubbing over it again and again with a nail file." Or what about the wildly dangerous blowfish, whose venom is like cyanide—times a thousand. Before you splash in the sea this summer, it'll behoove you to bone up on the deadly and dangerous sea creatures potentially lurking in the depths. And if you happen to encounter that most ballyhooed one (you know: the shark), know that This Is What Experts Say You Should Do if You're Attacked by a Shark. 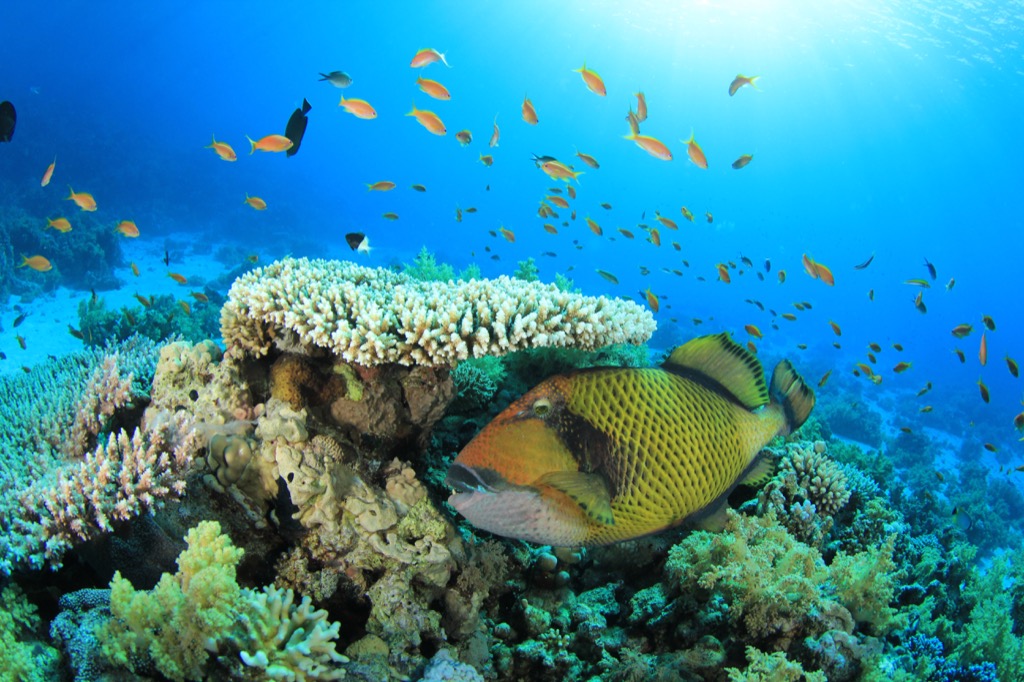 "While the chances of a shark attacking you while diving are very rare, the odds are better regarding the feisty Titan triggerfish," the folks at diving website Undercurrent warn. Found in coral reefs everywhere from Australia to Thailand, the creatures will bite through divers' fins and flesh, and often even when they haven't been provoked. Titan triggerfish are beautiful and bold, but divers know to keep their distance. And to learn about creepy creatures living on land, don't miss the 30 Most Dangerous Bugs in America.

In 2006, conservationist and iconic animal-themed TV personality Steve Irwin famously died at the hands (or tail) of a stingray. Though you can pet the sea rays at most aquariums, the ones in the wild still have their stingers in tact—and if Irwin's death is any indication, they aren't afraid to use them if they feel threatened. 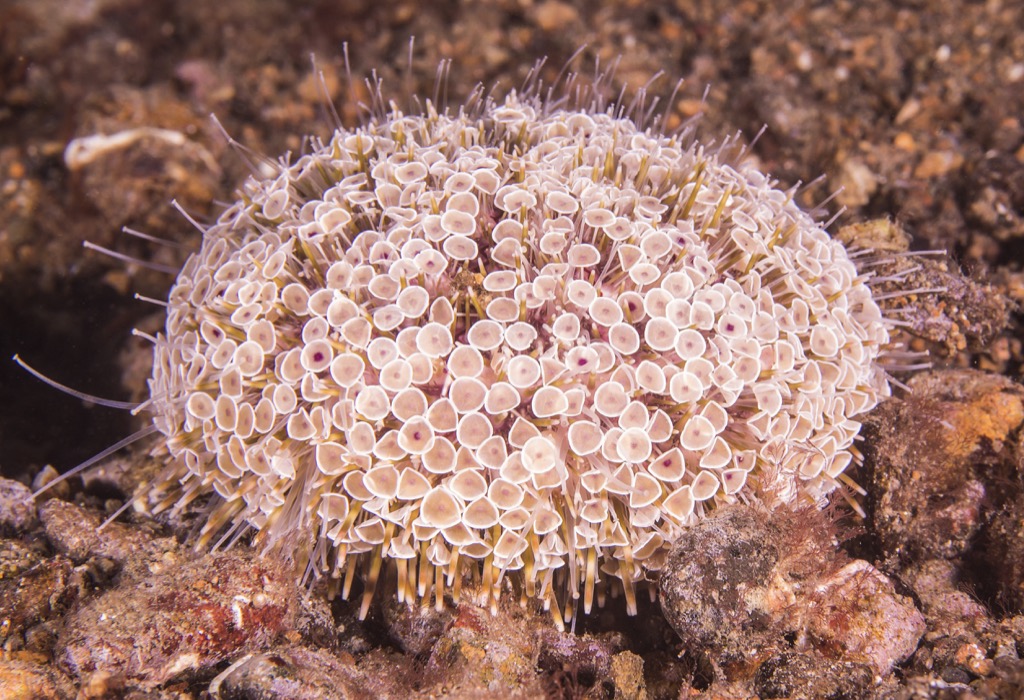 Don't let this sea urchin's beauty fool you. Each of its "flowers" is actually a tentacle with a little jaw (called a pedicellaria) that can inject toxic venoms and potentially kill you. Let's just say there's a reason that this ferocious "flower" was named the most dangerous sea urchin in the 2014 Guinness Book of World Records. And for more fears from the seven seas, check out the 30 Reasons Why the Ocean Is Scarier Than Space.

The electric eel—not actually an eel, by the way—gets its name from the way it attacks and kills its predators and prey. Its body contains organs filled with nearly 6,000 electrolytes that store electricity like small batteries; when something (like, say, a human) gets close, the not-actually-an-eel will discharge volts of electricity and shock the intruder, sometimes to death. 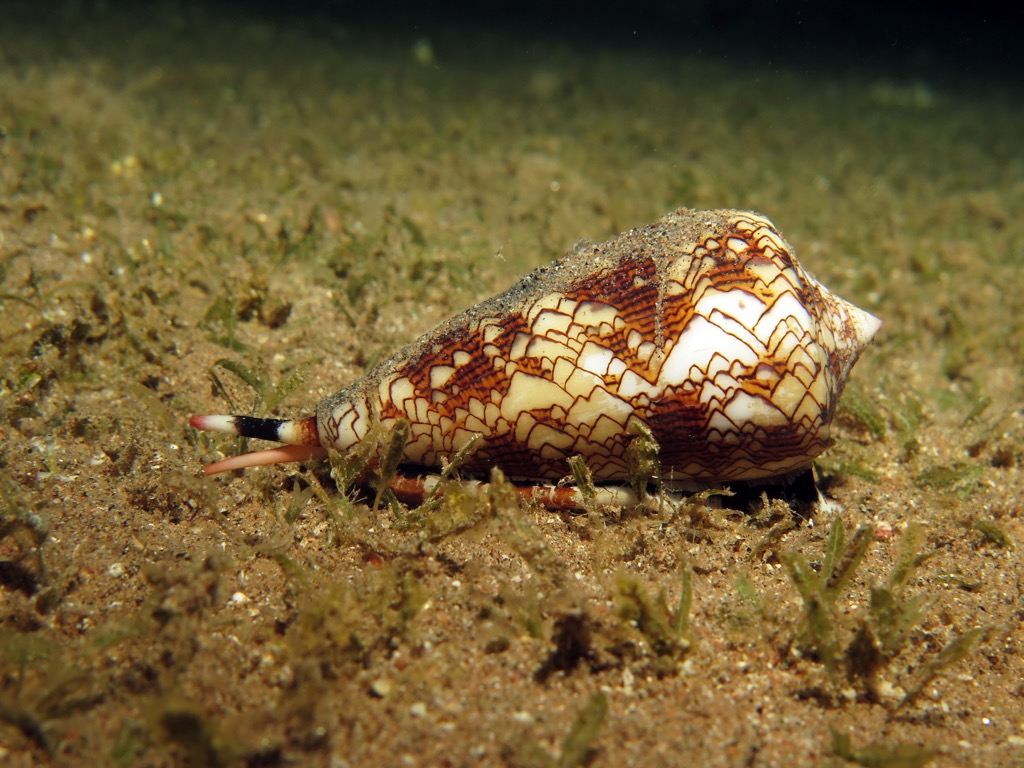 Though shell collectors lust after the complex carapace of the textile cone snail, even the bravest and brashest wouldn't dare get too close to a live one. Though tiny, these vicious snails can inject venom through their radular teeth capable of paralyzing and killing a human. At first glance, the blue-ringed octopus seems completely harmless. It's vibrantly colored, smaller than a candy bar, and doesn't look like it could hurt a fly. But in reality, according to the folks at Ocean Conservancy, this small sea creature has venom 1,000 times more powerful than cyanide, and at any given time it's carrying enough to kill 26 humans in just minutes. The venom will paralyze you until you stop breathing, so if you see one of these, stay far, far away. 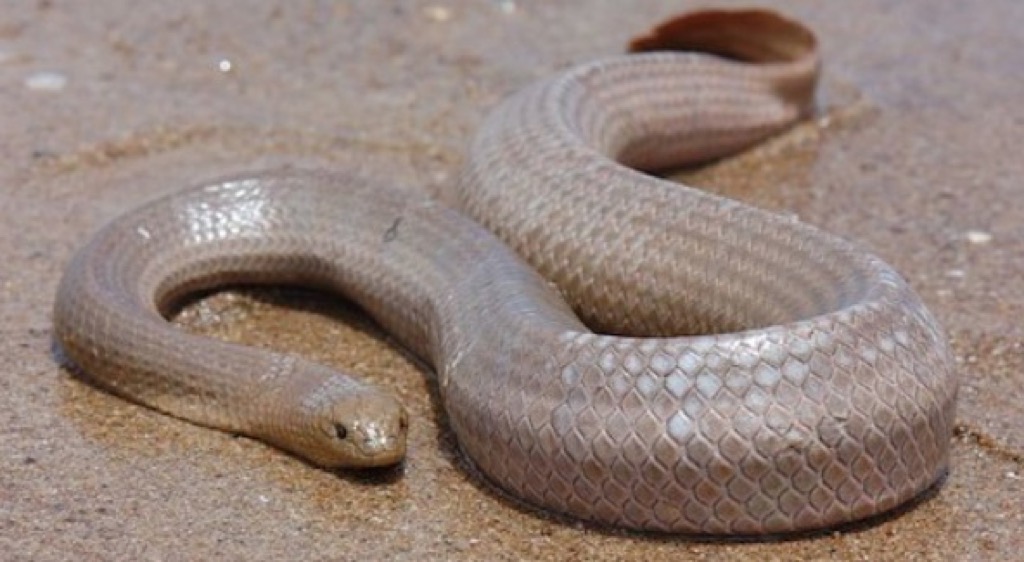 Snakes on land are scary, sure, but when it comes the fear factor, sea snakes are on an entirely different playing field. Take the Dubois sea snake, for instance. This Australian serpent is the most venomous sea snake out there, and one of the top three most dangerous snakes in the world. And if snakes make your skin crawl, then you'll relate to these 20 Childhood Fears That Stick with You Until Adulthood.

Pufferfish, or blowfish, possess venom that's 1,200 times more poisonous than cyanide, making these little guys one of the most toxic animals in the world. But despite their deadliness, the inflated fish is considered a delicacy in Japan, where trained chefs prepare it for exorbitant fees. Of course, one wrong cut can mean death for the person ingesting the sea creature—but what's life without a little risk? 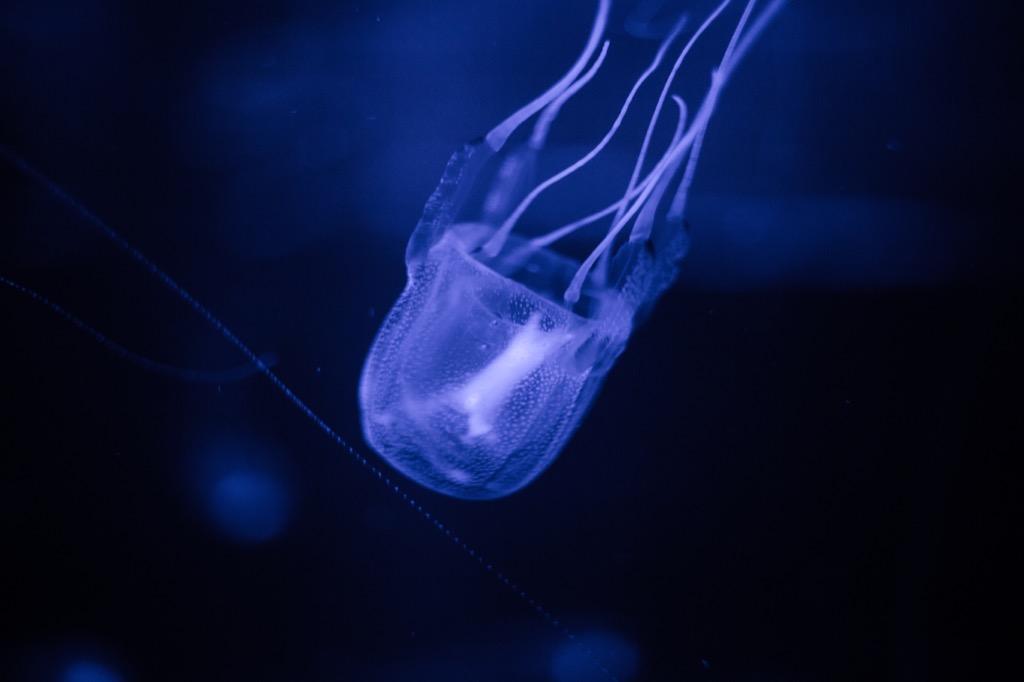 The box jellyfish's venom is so potent that it can kill fellow sea creatures before they even know what's happening. As for humans, a sting from a box jellyfish can cause everything from debilitating pain to heart failure, and victims have been known to die before ever reaching land. And no, despite what you saw in Friends, peeing on someone when they've been stung by a box jellyfish won't help.

The stonefish protects itself with 13 venomous dorsal spines capable of killing tissue and putting the human body into shock. "I describe the pain as excruciating because the word comes from crucify, and that's exactly what it was—there's no other way to describe it," one man told NewsMail after being stung by a stonefish between his toes. "It was like hitting your toe with a hammer and then rubbing over it again and again with a nail file." And when you're by the ocean, it's not just critters you need to fear—you'll also want to lather on the sunscreen to avoid these 20 Ways a Sunburn Harms Your Overall Health.

Experts speculate that the lionfish gets its name from its long, luscious dorsal spines that loosely resemble a male lion's mane. And like its namesake, the lionfish is a powerful predator—though instead of relying on fangs and ferocity, it depends on the venomous sting of its spines, which can cause pain, respiratory failure, and, in extreme cases, paralysis. 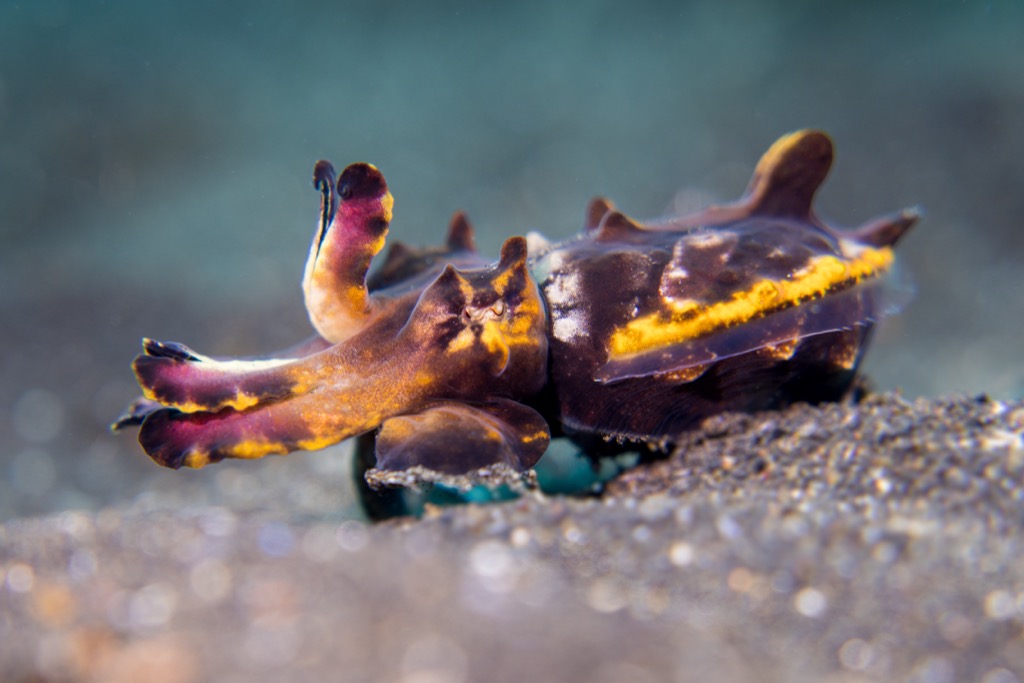 The flamboyant cuttlefish is the only toxic cuttlefish known to exist. This colorful creature has been compared to the blue-ringed octopus—as in, its poisonous flesh can kill any predator that dares to feast on it. And like the blue-ringed octopus, marine biologists believe that this toxic tank dweller uses its vibrant colors to warn potential predators to stay away. 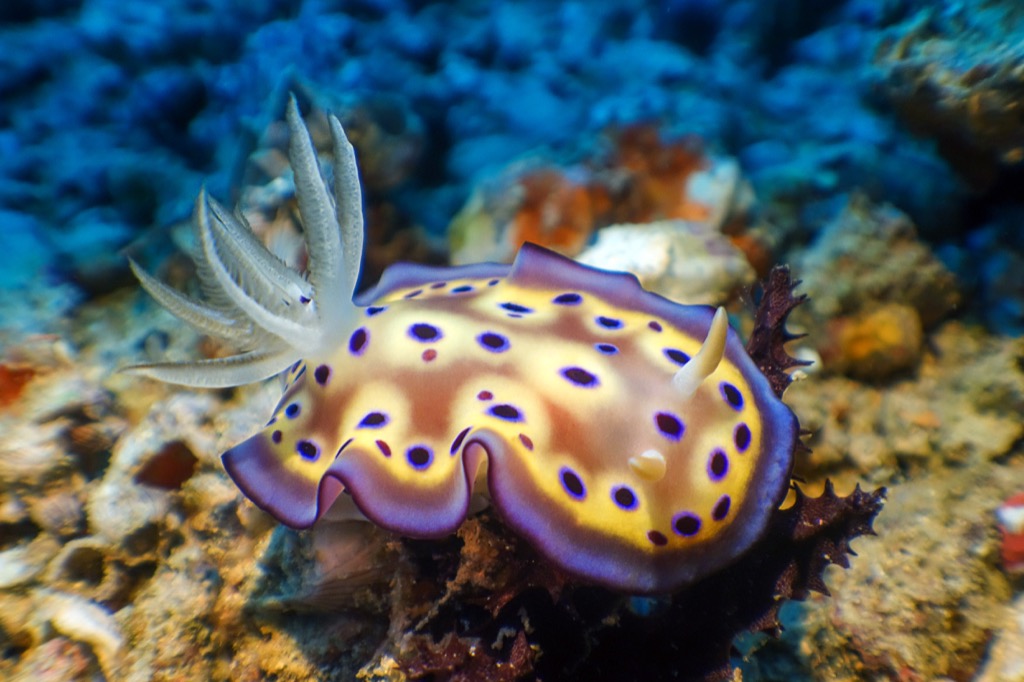 In case you haven't learned by now, you should stay as far away as possible from any brilliantly colored sea creatures, especially if they're sea slugs. Researchers at the University of Queensland recently found that various colorful sea slugs have the ability to slurp up and store deadly chemicals from the creatures they eat for later use. One type of sea slug in particular, the grey side-gilled sea slug, has been linked to canine deaths, and beach dwellers are encouraged to keep their children and pets at an arm's length to avoid accidental ingestion. 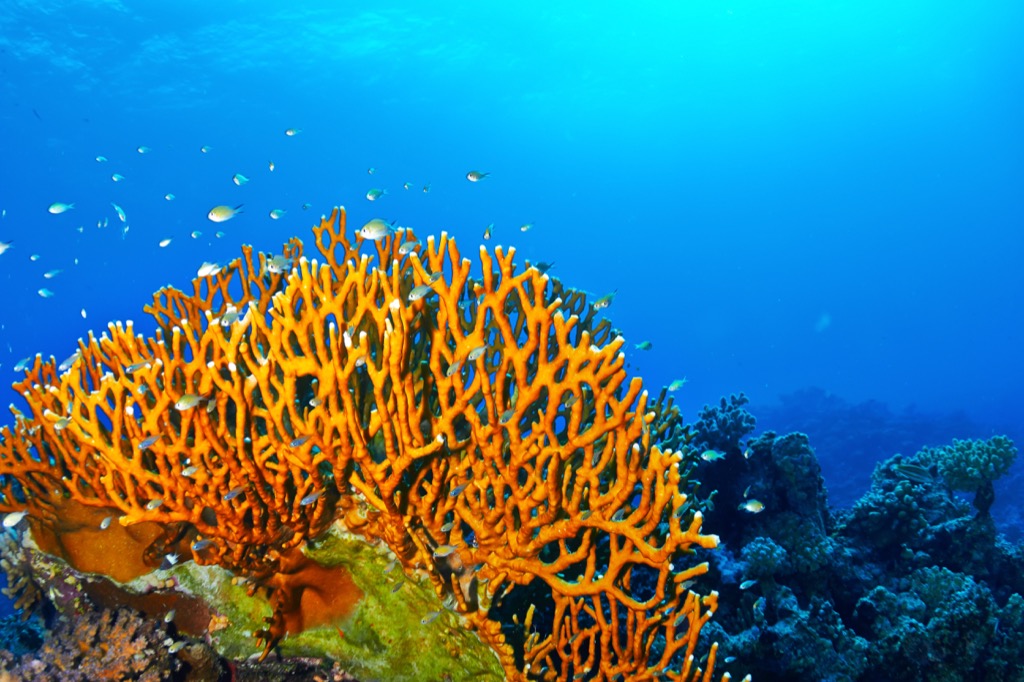 There's two things that you should know about fire corals. Firstly, they aren't actually corals—they're members of the Hydrozoa class, which is closely related to the jellyfish. And secondly, that these creatures (that ironically attach to coral) can inflict a serious sting that causes burning and a raised rash. 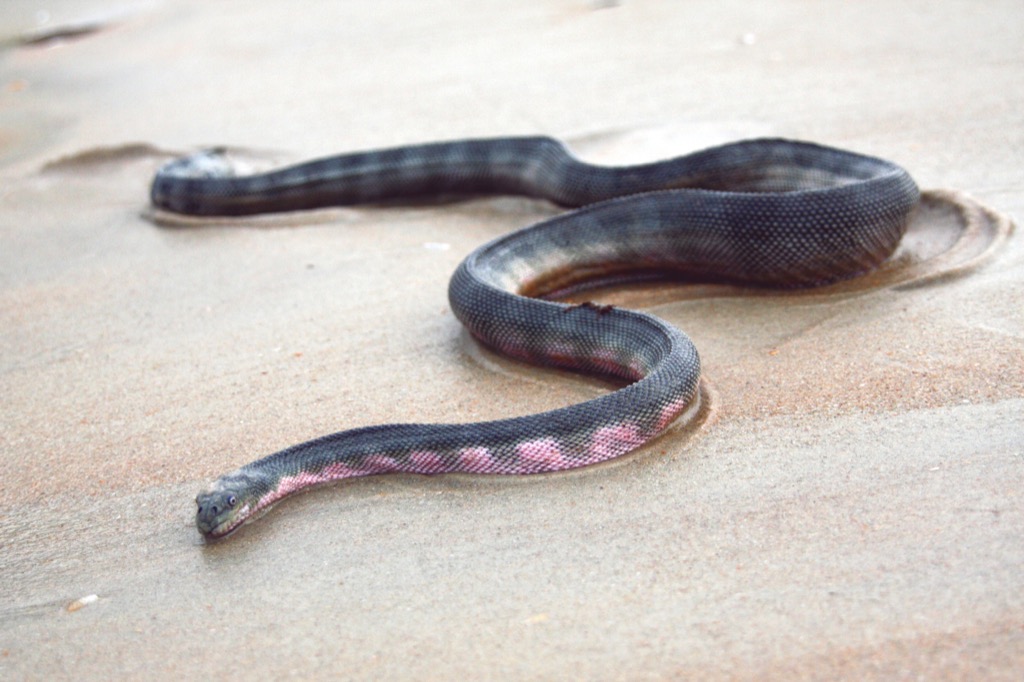 According to the Thai National Parks, beaked sea snakes are responsible for more than 50 percent of all sea snake bites. Each bite contains anywhere from 7.9 to 9 mg of venom; for reference, a human can die from just 1.5 mg. 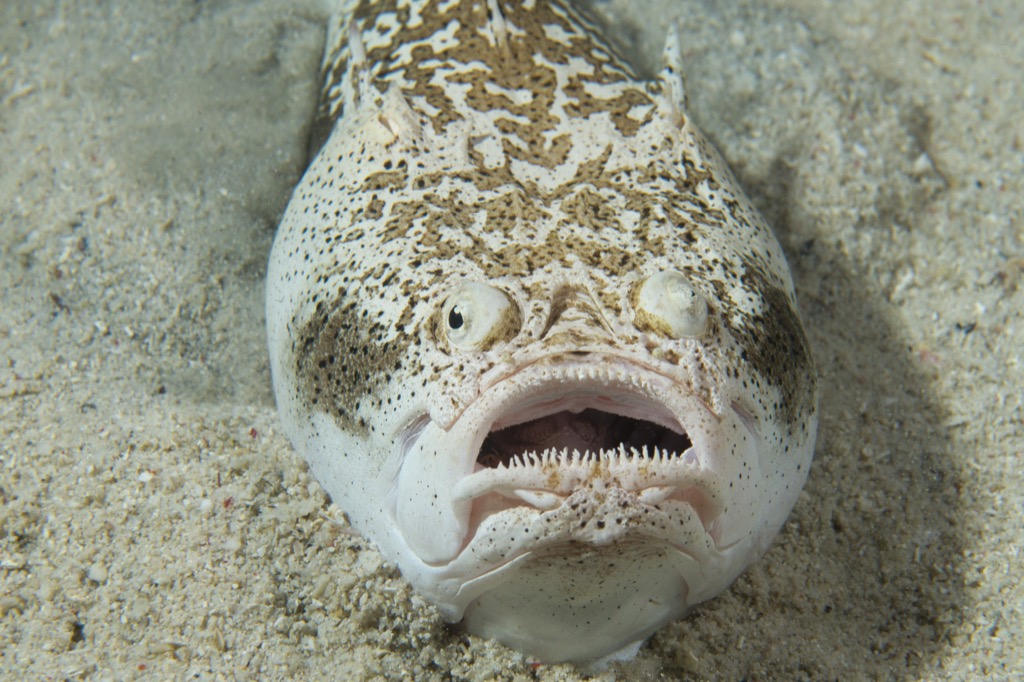 Stargazers have a tendency to burrow under the sand, making them hard to see and, therefore, avoid. Should you accidentally step on one, you'll know if you've been stung by the bleeding, pain, swelling, and slight electrocution. 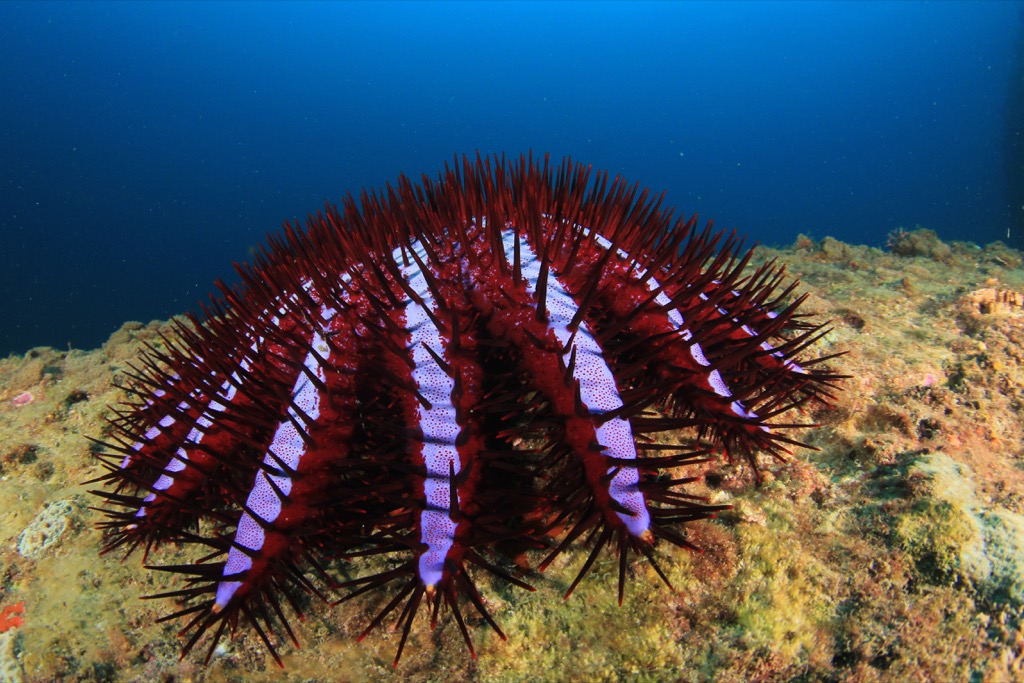 Generally about 13 inches in diameter, the crown-of-thorns starfish is larger (and much more dangerous) than its benign, literally washed-up relatives on the seashore. This coral-loving creature is covered in poisonous spines that cause intense, immediate pain lasting for up to three hours. And for more news from under the sea, check out the 30 Facts About the World's Oceans That Will Blow Your Mind.

Though the Portuguese man-of-war is just 12 inches long, its tentacles can be up to 165 feet—and unfortunately, these long tentacles are covered in venom-filled nematocysts that paralyze prey. Though a man-of-war isn't quite venomous enough to paralyze a human, its sting is powerful and packs quite the punch. And don't be fooled by "harmless" Portuguese man-of-wars washed up on shore: Even dead ones can sting.

Straight out of the stuff of nightmares, the candiru feeds on blood and has been found feeding on the urethras of swimmers. Once it penetrates, it can cause inflammation, hemorrhage, and in severe cases, death.

Beautiful though they may be, you'll need a surgeon should you cross the paths of one of these striped fish. Not only are their caudal spines (or "knives") venomous, but they can also cause deep wounds (like a surgeon's scalpel). And for more fascinating facts about the world's wildlife, don't miss The 20 Strangest National Animals.