These animals are seriously unimpressed.

We love our pets, but sometimes they're a little less than grateful. For example, we give them food, shelter, and our undying love, and sometimes they give us a dirty look. But since Love Your Pet Day is coming up on February 20, we're ready to give our grouchy pals a pass. (Actually, we're always ready—since they're so stinkin' cute and all.) Here are the funniest photos of our favorite grumpy cats, dogs, and more. And if you're looking for more hilarious photos, check out these 30 Funny Photos of Animals That Will Brighten Your Day. 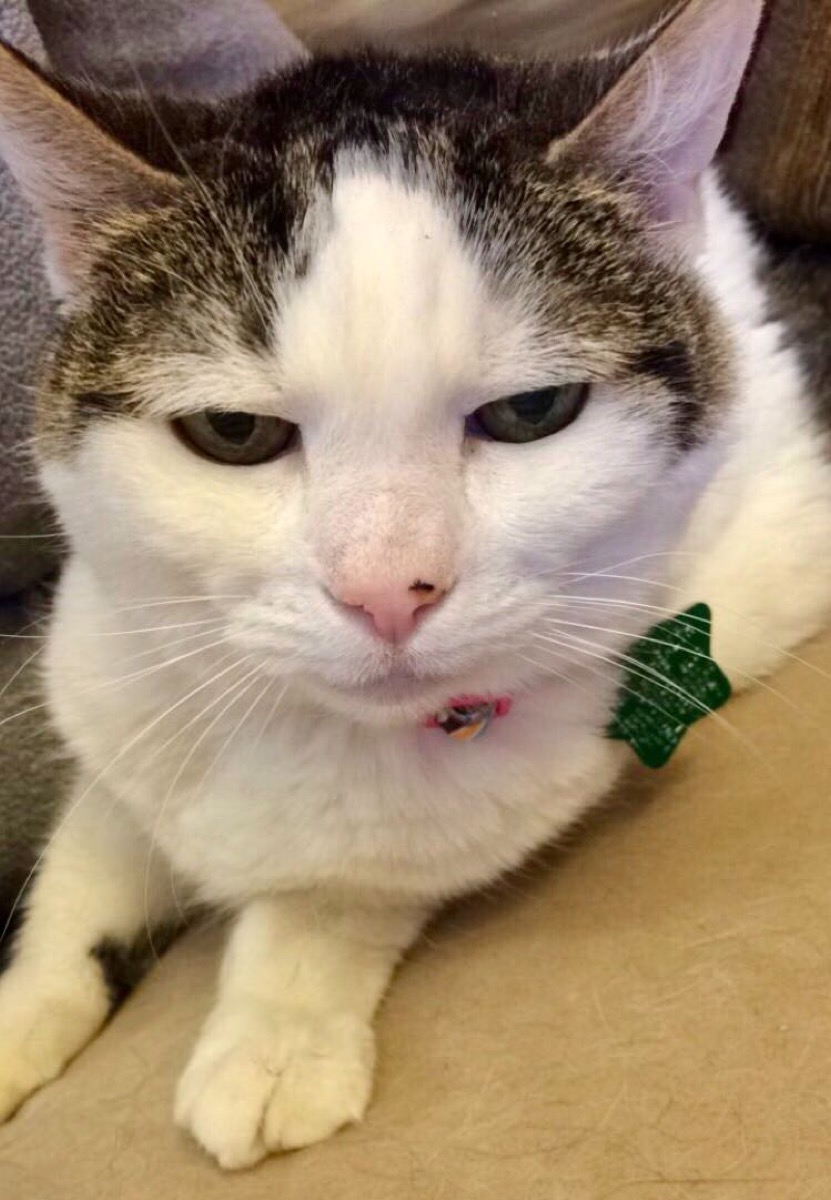 "Molly is 21 years old, which means she's got a lot to be grumpy about," says Molly's owner. "Before she entered her 20s, she took part in the typical grumpy cat activities, like attacking peoples' feet and refusing to tolerate belly rubs for longer than 10 seconds. Now she just sleeps on the radiator all day and gives the occasional dirty look." And if you've always wondered why your cat's naps last all day, check out our explainer on Why Cats Sleep So Much.

This peeved pit's owner, diabetic_bob, knows exactly why his pup is feeling less than stellar. "Someone is tired of the cold," he writes. Obviously, we can relate. For more on that, check out the 20 Tell-Tale Signs Your Pet Is Miserable. 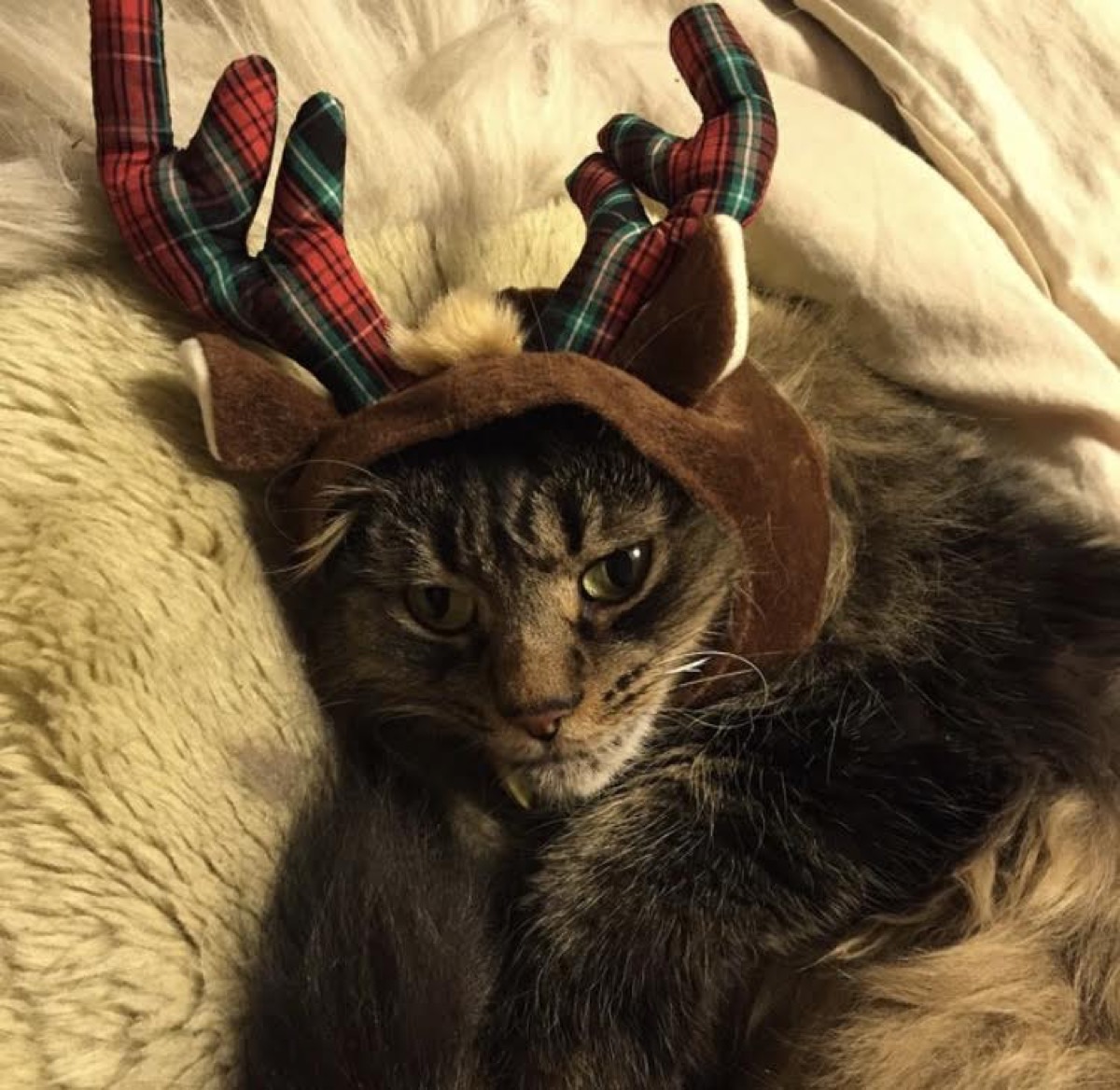 If cats are one thing, it's dignified. So when they're made to wear funny outfits, they sometimes get a bit grumpy. Plus, "Penny hates the holiday," says this kitty's owner. And for more pics of your favorite pets, are 30 Aw-Worthy Pictures of Pets in Costume. 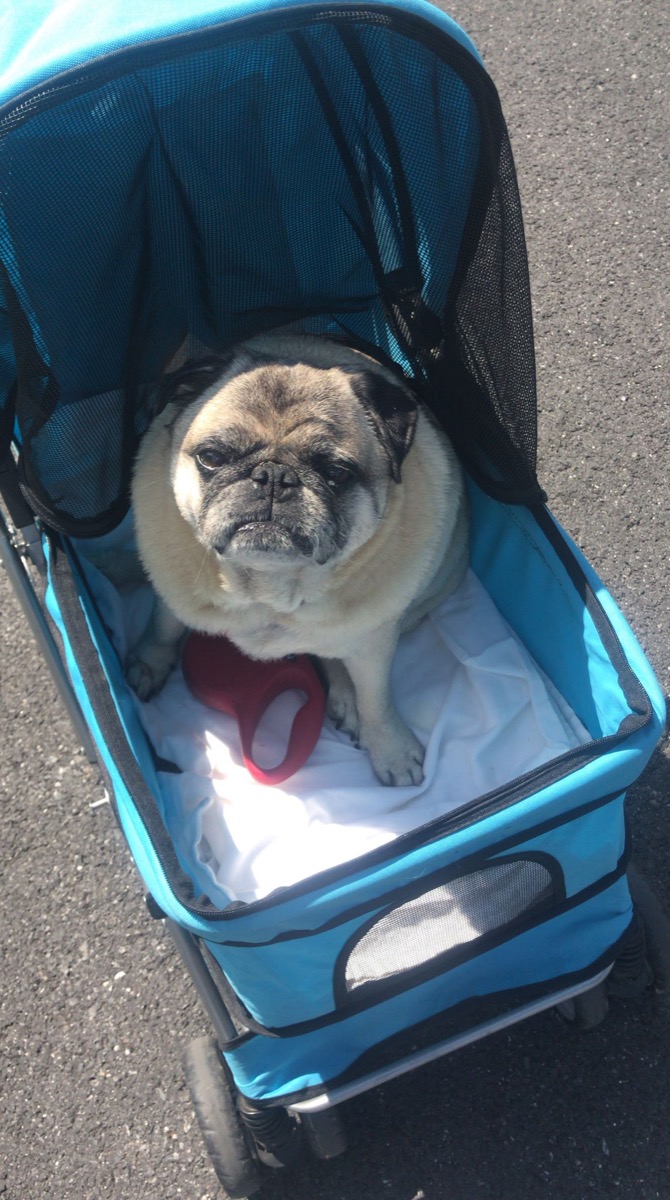 You might be wondering why Dani is in a stroller when his leash is right there. "When it gets too hot out, it's hard for him to breathe since he doesn't have a nose and he's overweight," says Dani's owner. "I was pushing him in his stroller one time and I stopped and asked him if he wanted some water (he has his own water bottle too) and this was the face he made when I stopped pushing him."

This fluffy cat, who goes by the name of kirby_fluffy_persian on Instagram, was just trying to enjoy the view and get clean when its owner captured this shot. "Falling asleep while giving myself a bath," the caption reads.ae0fcc31ae342fd3a1346ebb1f342fcb 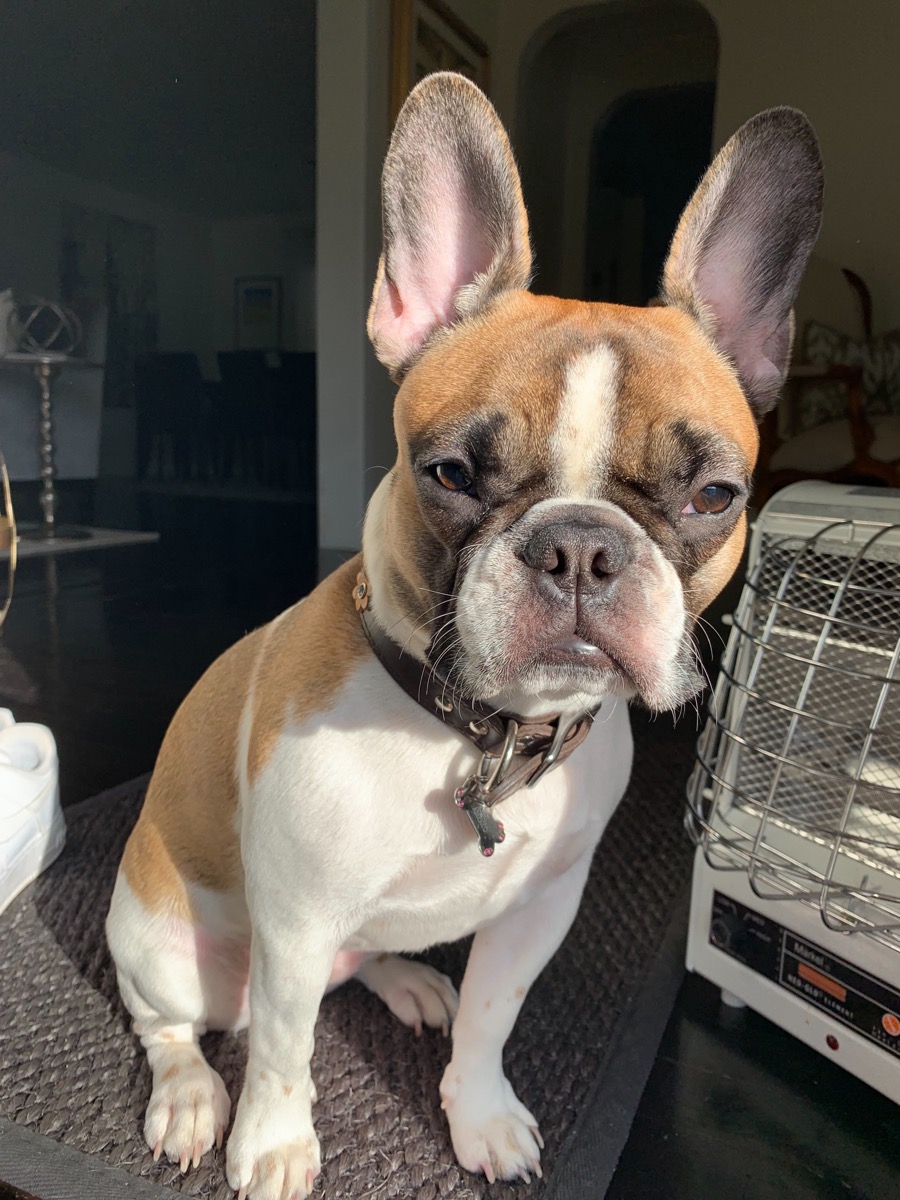 Wonder why Remi looks so unamused? She wasn't allowed to go outside while her owner was washing his car. "She wanted to join in on the fun," he says, "but she had to watch from inside. And while the other members of her human family were willing to play with her, she chose to sit by the door, sulking." 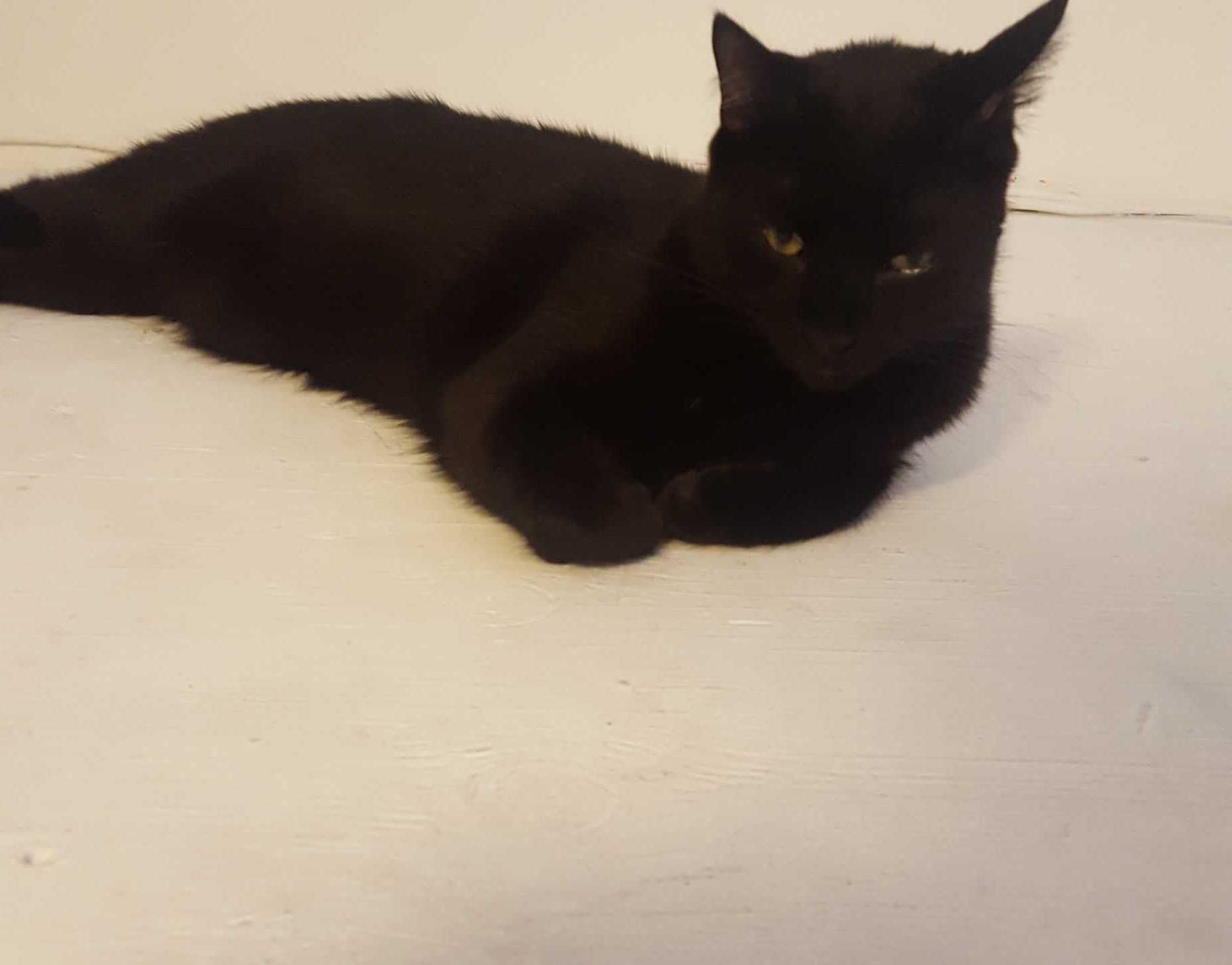 "I think that's just his face," says Puck's owner. "He has resting cat face." If that made you chuckle, check out these 30 Cat Puns That Are Absolutely Hissterical.

Even happy_hedgies, who is the proud owner of hedgehogs Travi and Queso Blanco, notes that the animals can get a bit sassy. "Attitude for days #attitude #grumpypets," reads the caption on this adorable shot. 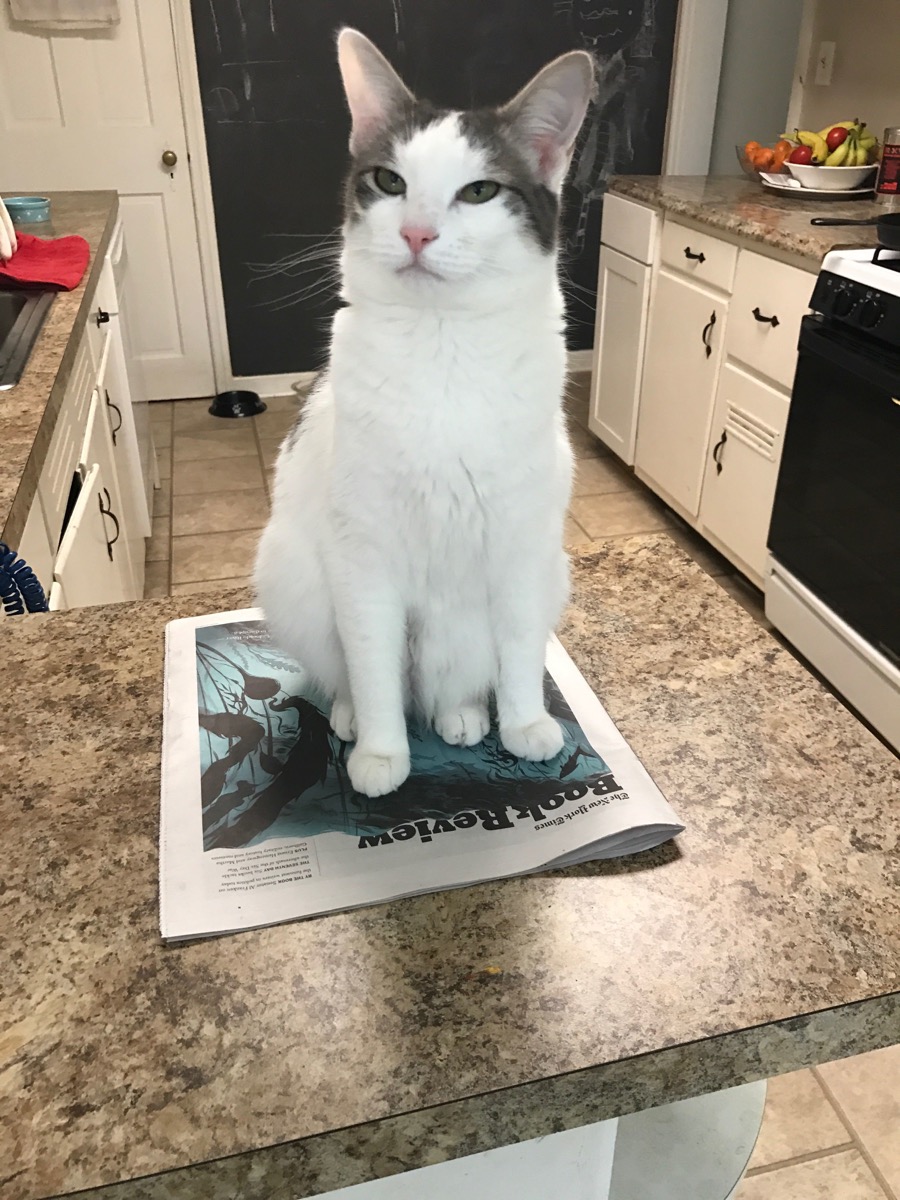 If you just found out your favorite book didn't make it onto the bestseller list, you'd be grumpy too. That's what happened to Elle. "Plus, we told her she had to get off the counter," says her owner. 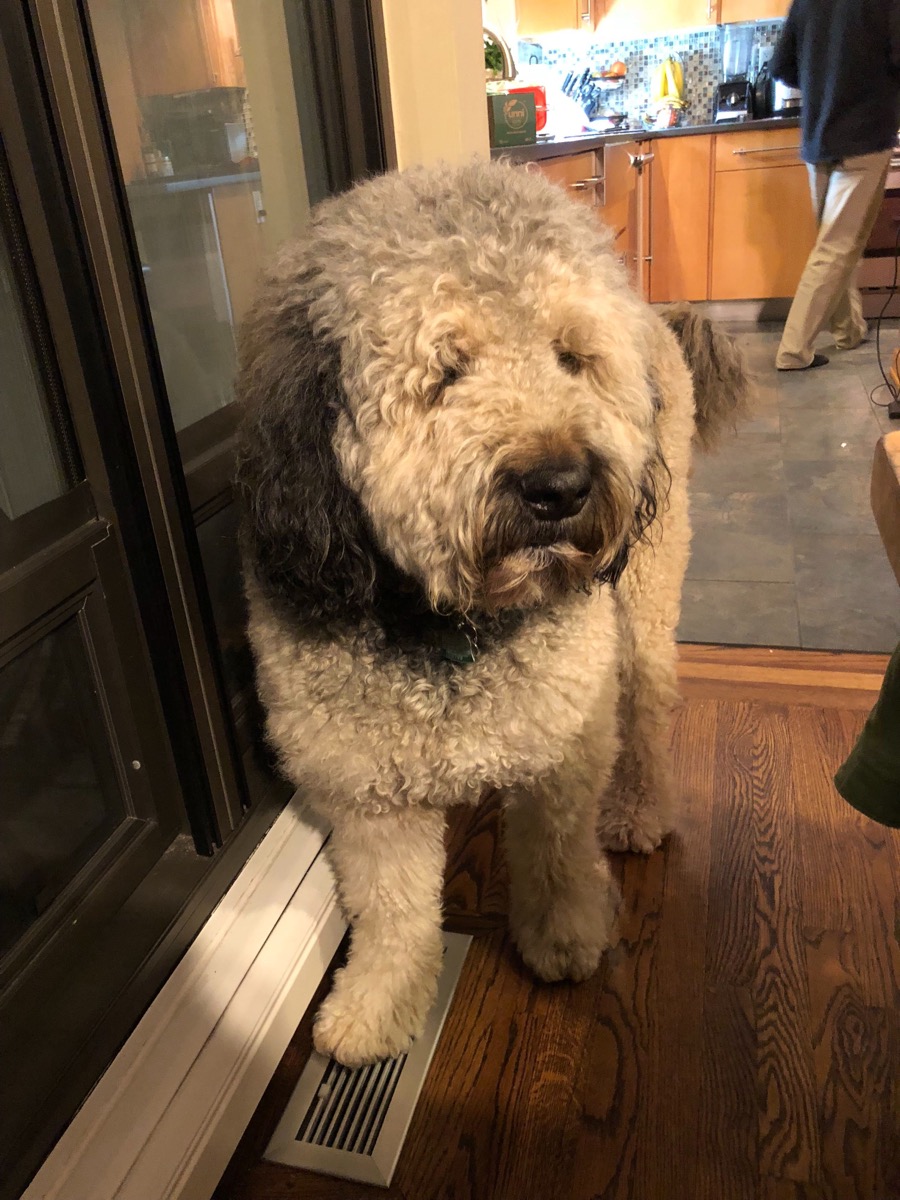 "Whenever there's someone eating, drinking, or even just breathing in the kitchen, Walter makes it his mission to frown mercilessly until he gets food," says this Bernedoodle's owner. "Unfortunately he's smart enough to have figured out that the kitchen is where the human kibble is, and so you better bet that anything you eat is going to be half yours and half his." 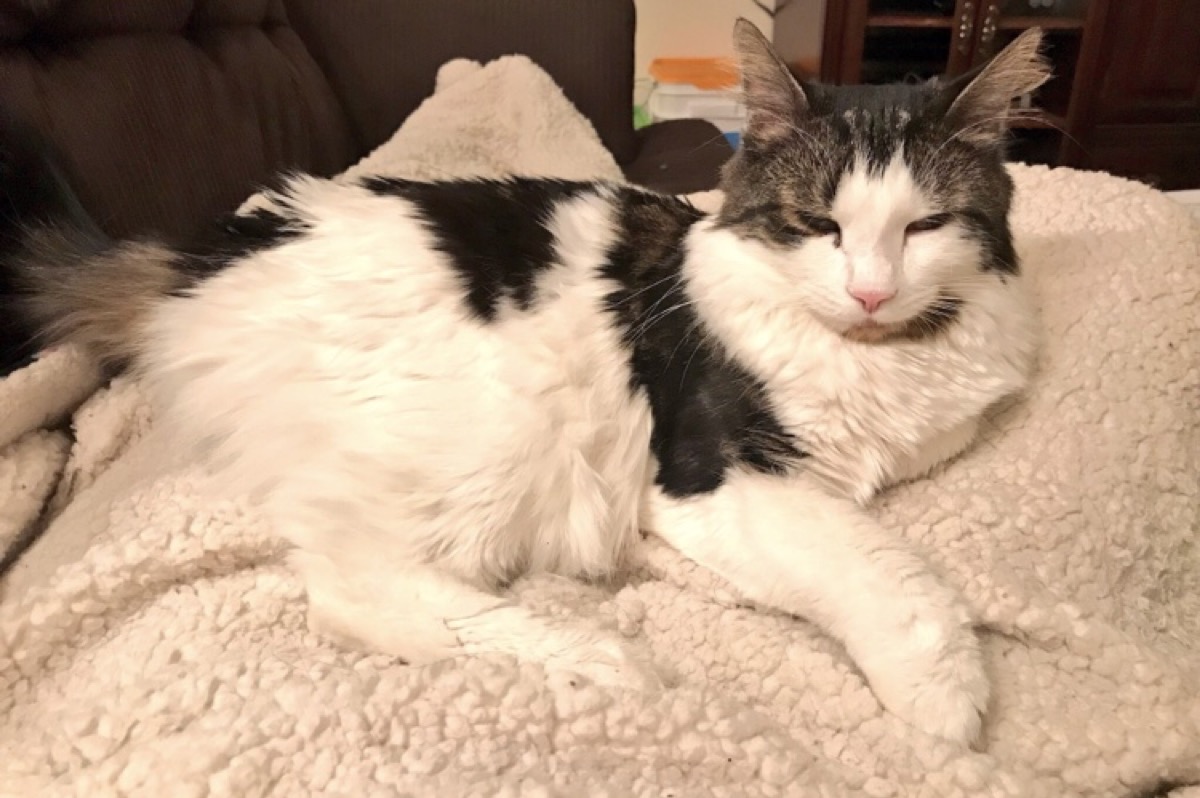 Though Marshall the polydactyl (he has seven toes!) cat looks like he's living in the lap of luxury atop his king-sized fleece blanket (yes, it's completely his), he's still got his grumpy face on because it comes at a price: putting up with his overly affectionate mom.

"This photo was taken right after he plopped down and I was stretching my leg out to the side a few inches to give him more room," says his owner. "Instead of getting more comfortable and happy, he ended up being a grumpy Gus over the tiny shift. And yes, this was even after getting a treat."

No one likes having to take out their puffy winter coat, and that includes Otis. "When it turns windy and cold, it reminds me how much Otis hated DC winter," writes his owner rgar5004. 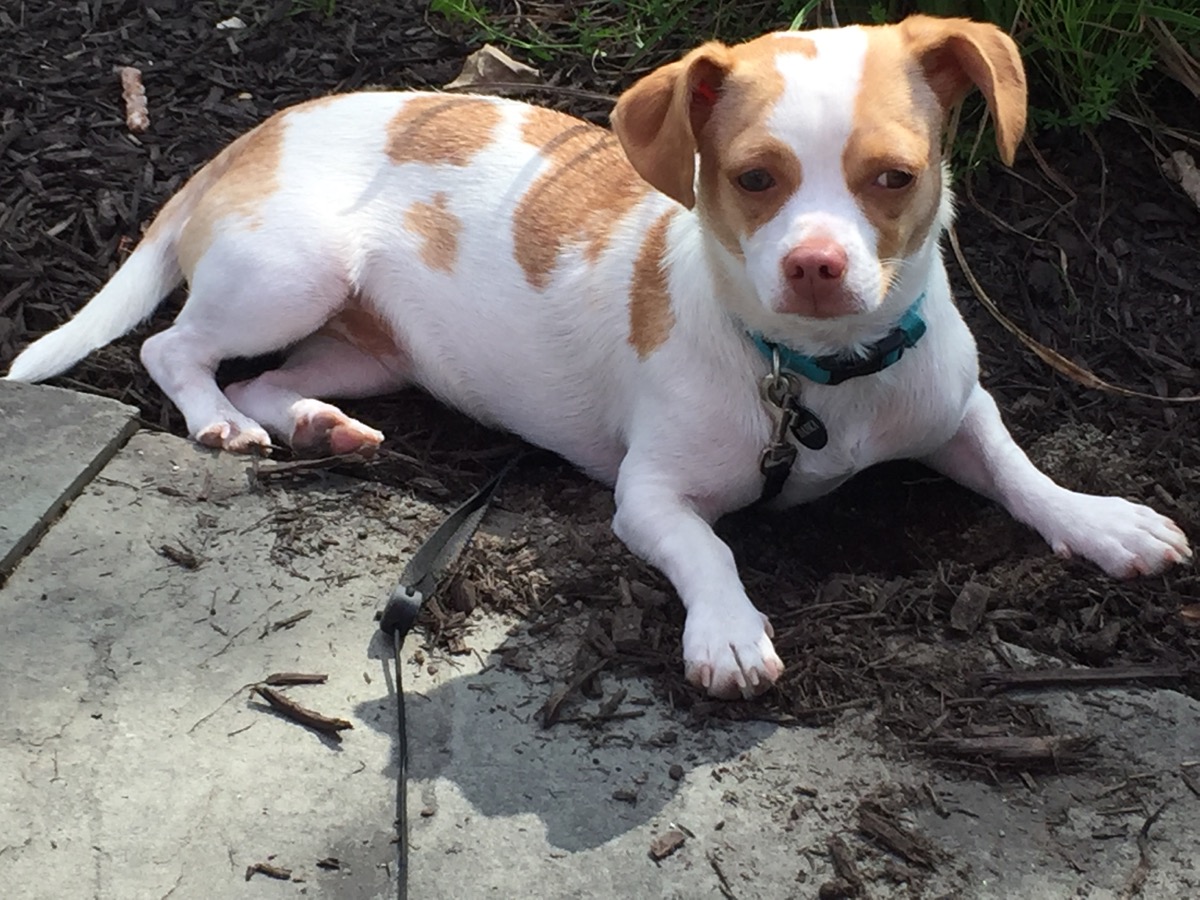 "Babka is the queen of side eye," says her owner. "She literally never smiles, unless she's about to vomit. She looks miserable, most of the time, even though we're pretty sure she's a happy puppy. On this day, she dug up the ground for hours in the hot summer heat. We gave her the same amount of side-eye when we had to clean all that dirt off of her after this."

"When you realize it's Monday tomorrow," writes this beagle's owner, on his account larrynpals. Agreed, Larry.

"Hey, you. I require my breakfast. Now. And a massage," writes Instagram user anotherlatte of her high-maintenance cat. 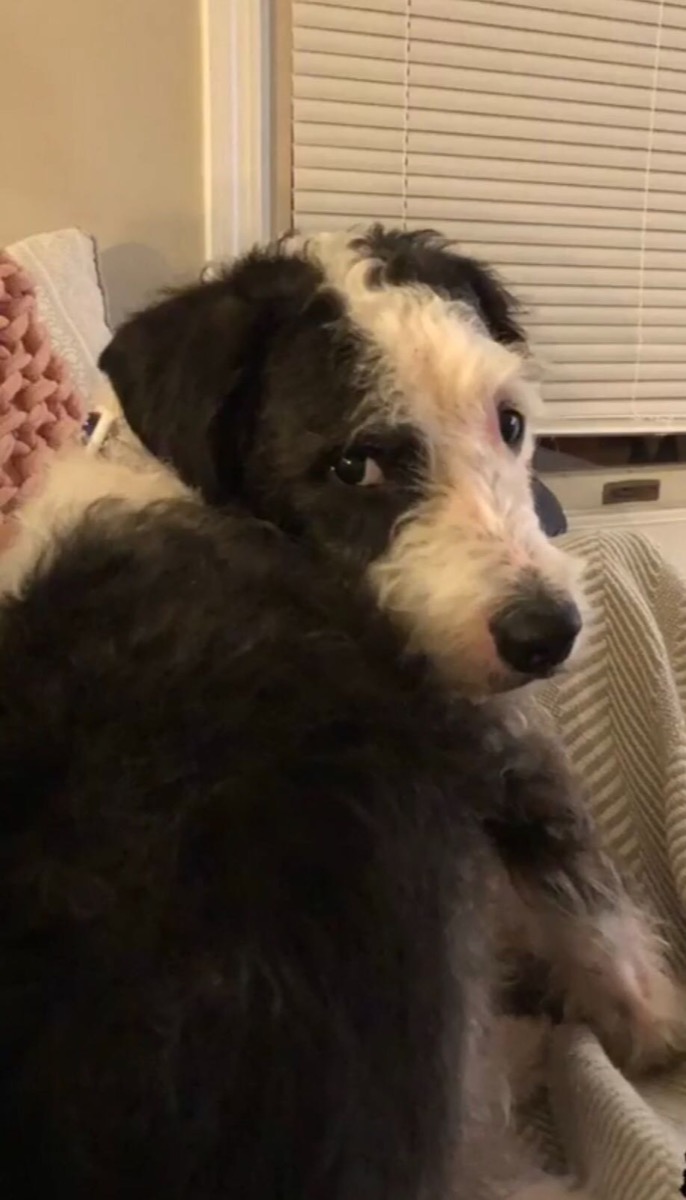 "Rudy didn't like that I was hogging all my mom's affection on the couch," says his owner. "He also knows he's not allowed on this particular sofa, too. This was his face when I told him to get off the couch."

"Come give big poppa a hug #grumpycat," writes this sleepy cat's owner mr.yvesalexander. But, you know, not for too long. 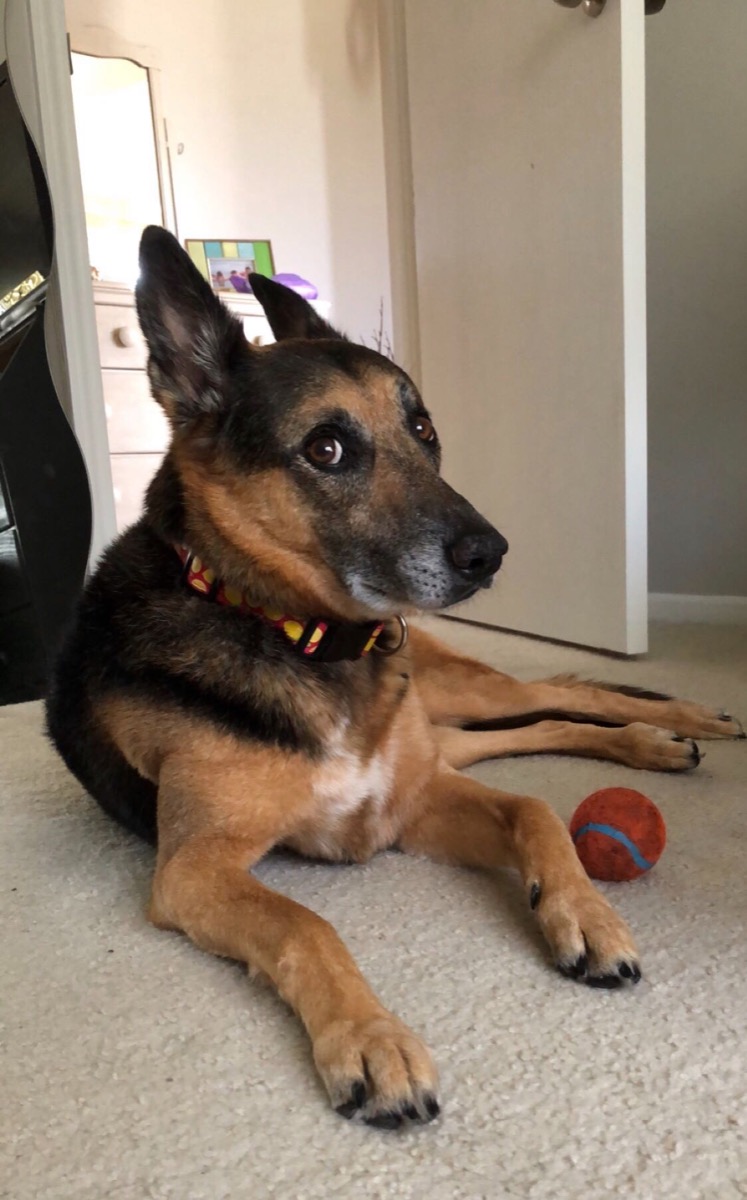 This is the grumpy face of a dog who's just been caught in a lie. "Rosie thought I wouldn't see that she was digging in my bedroom trash can," says her owner. "When I held up a few pieces of dryer sheets and floss she gave me this look. I can only imagine she was trying to say, 'I have no idea why you're showing me those…'" All right, Rosie.

In case you didn't know, chameleons change color when they're upset. Apparently, they also give side-eye. "Mr. Grump face doesn't like going outside at first then doesn't want to go back inside. Early's grumpy colors," writes the reptile's owner layla_cb. 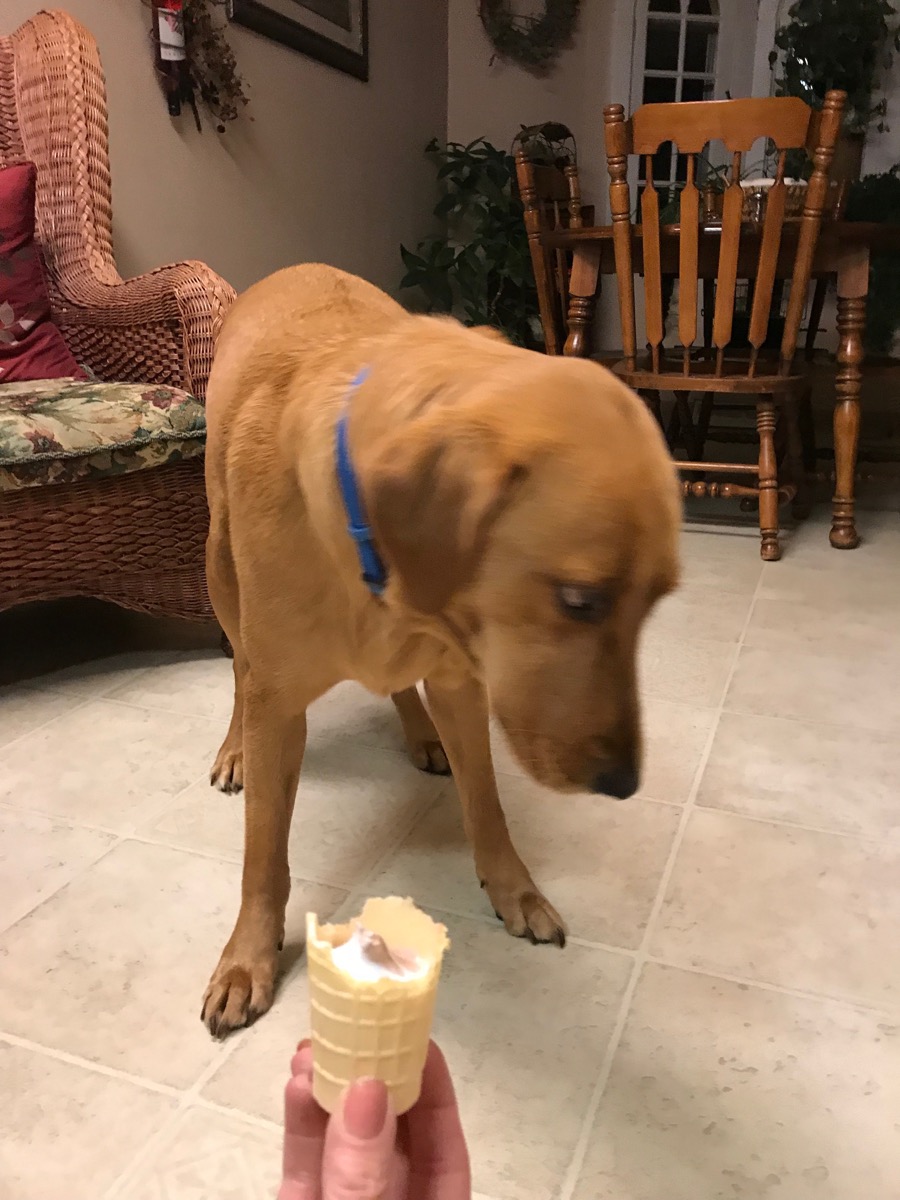 Sometimes, you're grumpy for a seriously relateable reason—like the fact that you can't indulge in a sweet treat. "Oliver couldn't believe that I ate ice cream in front of him," says his owner. "He's on a diet."

Sometimes the weather doesn't cooporate—and that can make you grumpy. "The look on my face sums up how I feel when it rains in summer and I can't show off my summer body," says Stanley on his Instagram account lookingfurtrouble. 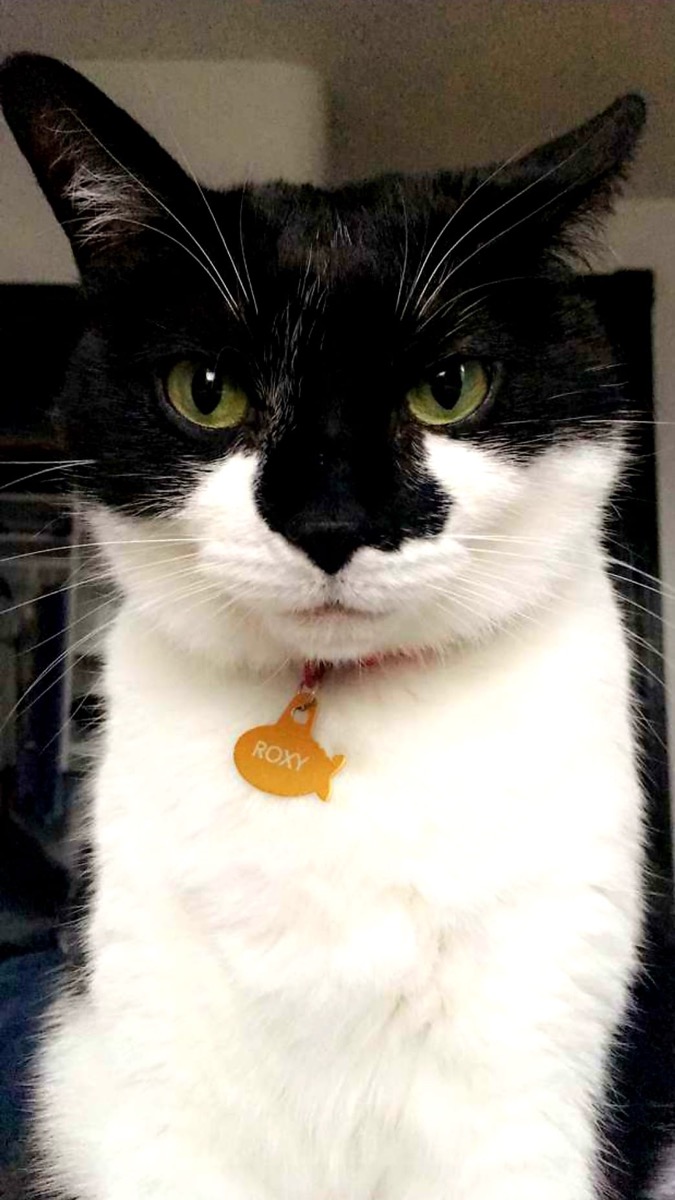 "I bought Roxy a $100 cat jungle gym to play with while I study for my law school exams," says Roxy's owner, who is definitely over it. "Instead of using that, she spends her free time slipping into plastic bags from the grocery store and rolling around in them on the floor. Money well spent, am I right? I took her plastic bags away and this is the reaction I got." Next up, check out the 19 Pet Adoption Stories That Will Make You Cry.