If you've ever fallen in love, you know just how exciting, mesmerizing, and, let's be honest, scary it can be. And while you've no doubt spoken to your pet about your most recent crush (haven't we all?!), you might have wondered if our animal companions have the same capacity for love as we do. And, before we show you these photos that prove they definitely do, we'll give you the facts.

According to Paul Zak of Claremont Graduate University, animals—at least on a chemical level—show signs of loving one another. For example, in one study, Zak and his team found that after 15 minutes of play between a dog and a goat, the dog saw a 48 percent increase in levels of the love hormone oxytocin. The goat, on the other hand, saw a 210 percent increase.

"At that level of increase, within the framework of oxytocin as the 'love hormone,' we essentially found that the goat might have been in love with the dog," wrote Zak for The Atlantic. "The only time I have seen such a surge in oxytocin in humans is when someone sees their loved one, is romantically attracted to someone, or is shown an enormous kindness." Here are more photos of animals that will prove this exact fact—while simultaneously tugging on your heartstrings.

1
Cats cuddling and posing for the camera.

There's no way to look at this photo and not come to the conclusion that these two kitties are totally in love. And while we're not positive cats can hold down romantic relationships with each other, we do know they appreciate cuddles.

In one study published in the journal Preventative Veterinary Medicine, researchers found that cats who were pet and spoken to in high-pitched voices had elevated moods and produced higher levels of protective antibodies than cats who weren't. In other words: If your cat doesn't already have a cuddle buddy, you should go pet her right meow. 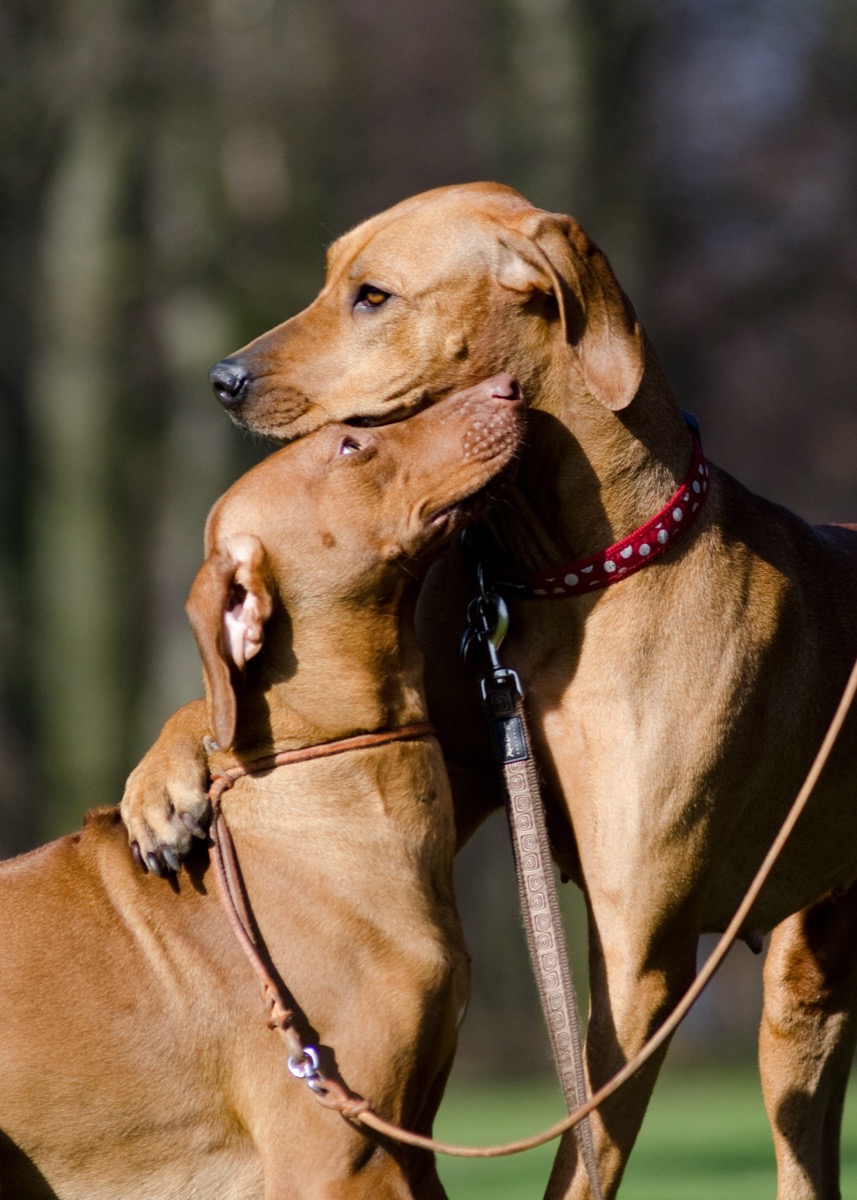 These dogs have moved far beyond the puppy-love stage and into I've-got-your-back-through-thick-and-thin territory. In fact, they might even be walking down the aisle soon—because it turns out, dogs can fall in love with one another. In 2014, a study by the University of Tokyo found that dogs' brains release oxytocin, also called "the love hormone," during positive interactions with other dogs, as well as with their owners.

In case it's not clear from this photo, here's the thing: Cows have best friends. In fact, one study conducted at the University of Northampton even found that when cows were separated from their besties, their heart rates increased as a result of stress. Fortunately, it looks like these pals are enjoying a relaxing lifestyle in the countryside—and getting some snuggles in, too.

4
A cat and a Golden Retriever sneak in some cuddles.

While cats and dogs certainly express affection differently, that doesn't mean they can't still fall in love. Take this cuddly couple, for example. The cat brings the snuggles, while the dog offers a comforting paw of support.

5
Just a pair of Lovebirds.

This lucky photographer caught two Lovebirds doing what they do best—loving on each other. This colorful species of Parrot received its name because of the birds' strong, monogamous pair bonding and the long periods of time they spend sitting and cuddling each other.

You're probably already familiar with the human concept of necking, but thanks to this photo, you know giraffes do it too. While it's not totally clear what these giraffes are up to, it's pretty clear that they're totally in love.

7
Monkeys find love atop a tree. 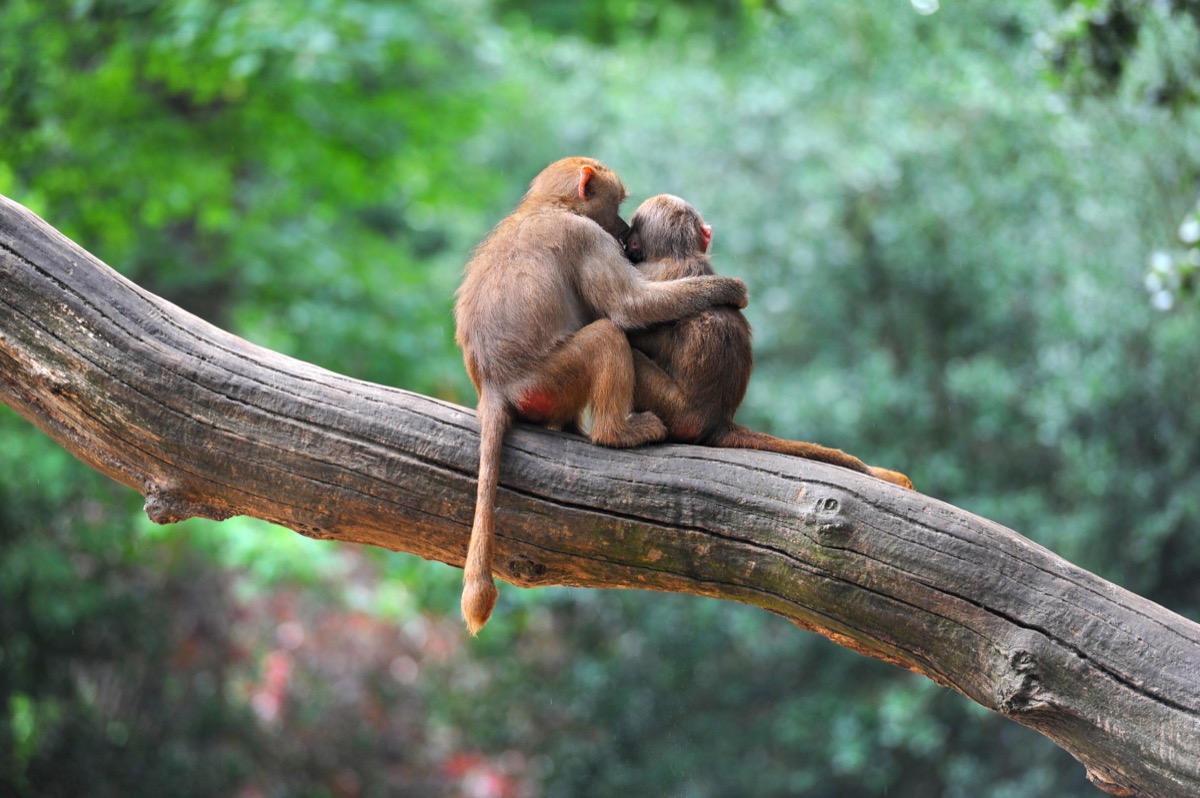 One University of Pennsylvania in Philadelphia study found that owl monkeys who were forced to leave their partners produced fewer children with another mate and were seemingly less happy. Luckily, it looks like these two are spending their days in loving bliss.ae0fcc31ae342fd3a1346ebb1f342fcb

8
The forbidden romance between a cat and a monkey. 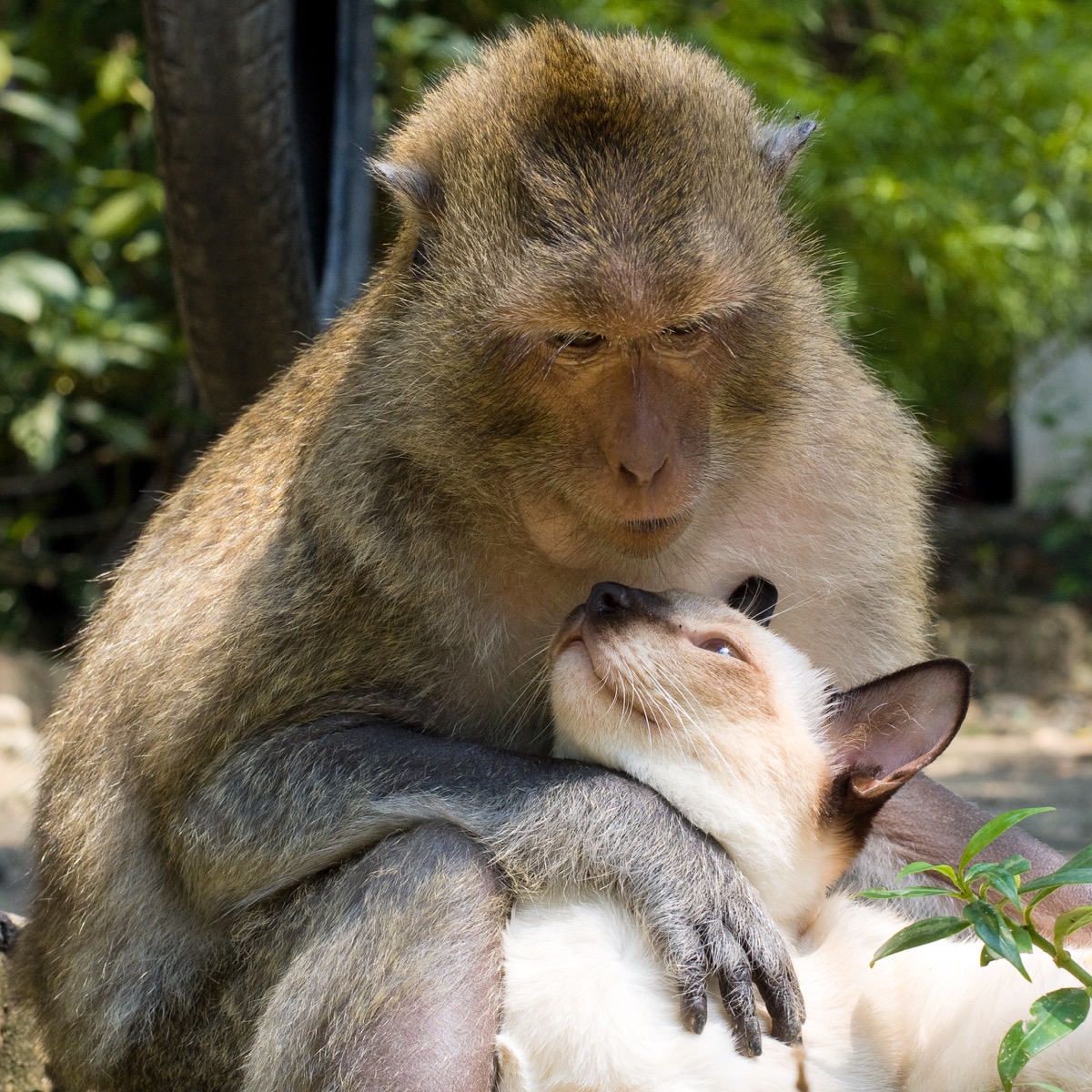 Through a series of photos, a photographer captured the friendship between a domestic cat named Alan and a monkey named Jojo in Thailand. As the story goes, the two animals became fast friends after Alan happened to wander into the macaque field one day and Jojo "adopted" him.

9
A kangaroo kisses its mate. 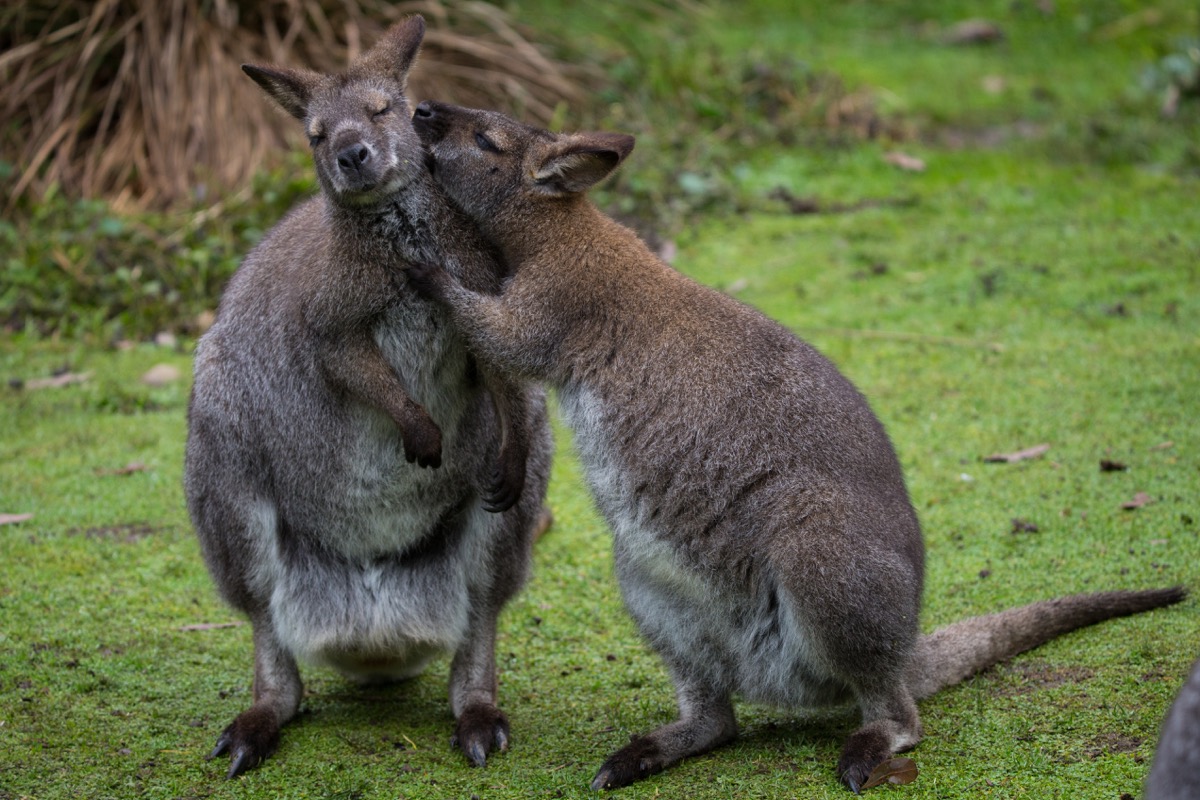 Us humans are always kissing our loved ones on the cheek—and kangaroos are no different! You can't deny these marsupials are feeling the love Down Under.

10
A lion and lioness rest side by side.

This King and Queen of the jungle are so secure in their love that they don't have to show it off. According to Lion Alert, male lions typically cuddle close to the lioness they choose to partner up with and give her licks of affection. Aw! 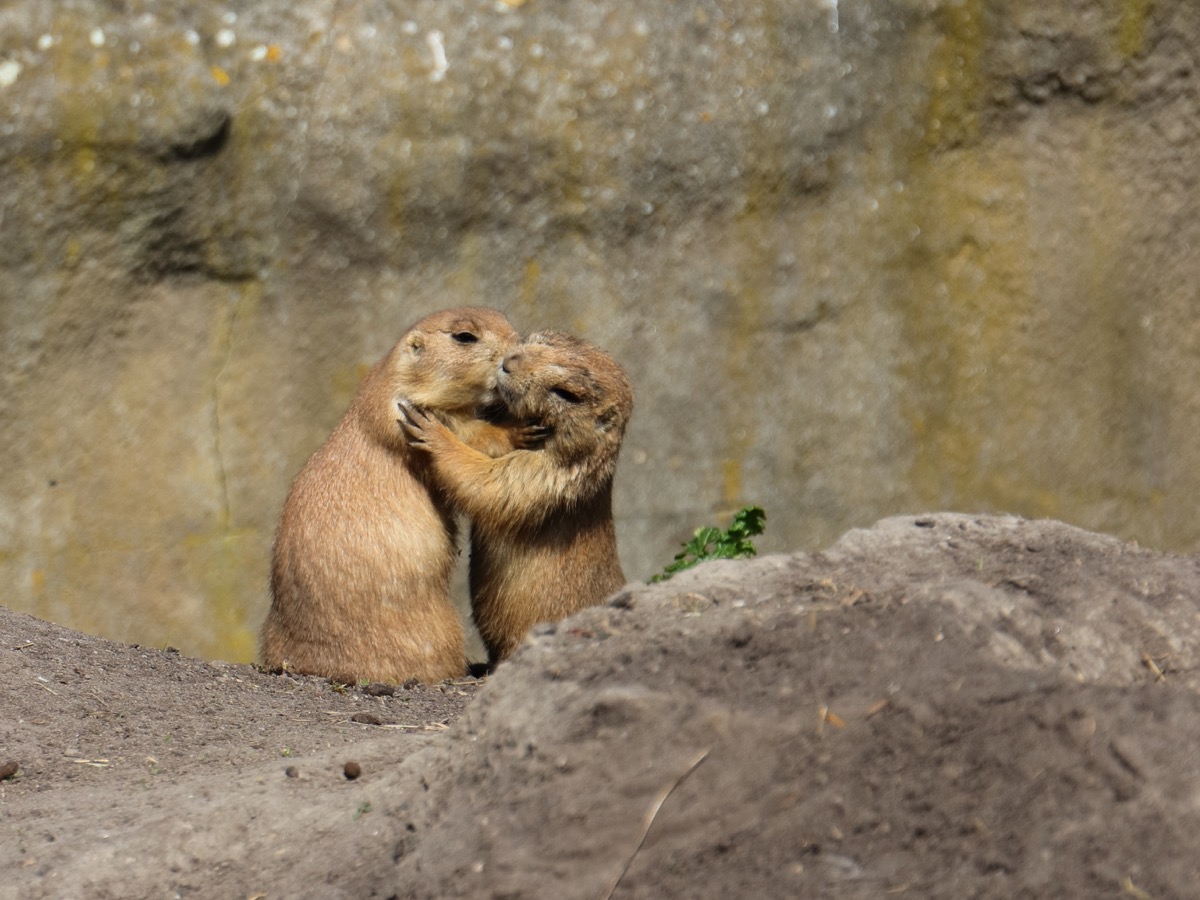 When you're totally in love, you just want to embrace your partner! And we can only imagine that's what's happening between these two prairie dogs, who are holding each other close. 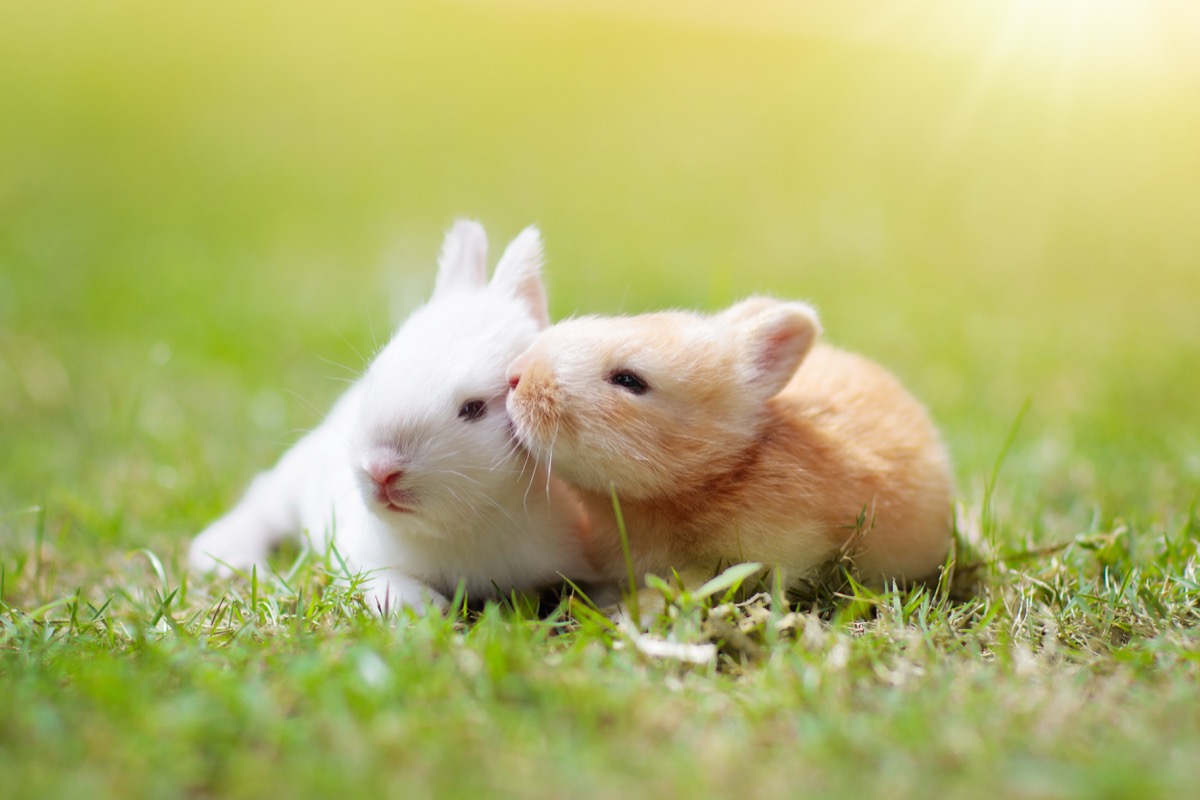 While these baby bunnies are teeny and fluffy, they're still able to show each other they care by planting tiny bunny kisses on each other's cheeks!

13
King penguins take a romantic stroll down the beach.

Despite the fact that King penguins don't mate for life, the males do remain by the female's side through the birth and after to help her raise their offspring—so romantic walks like the one are probably a common occurrence. 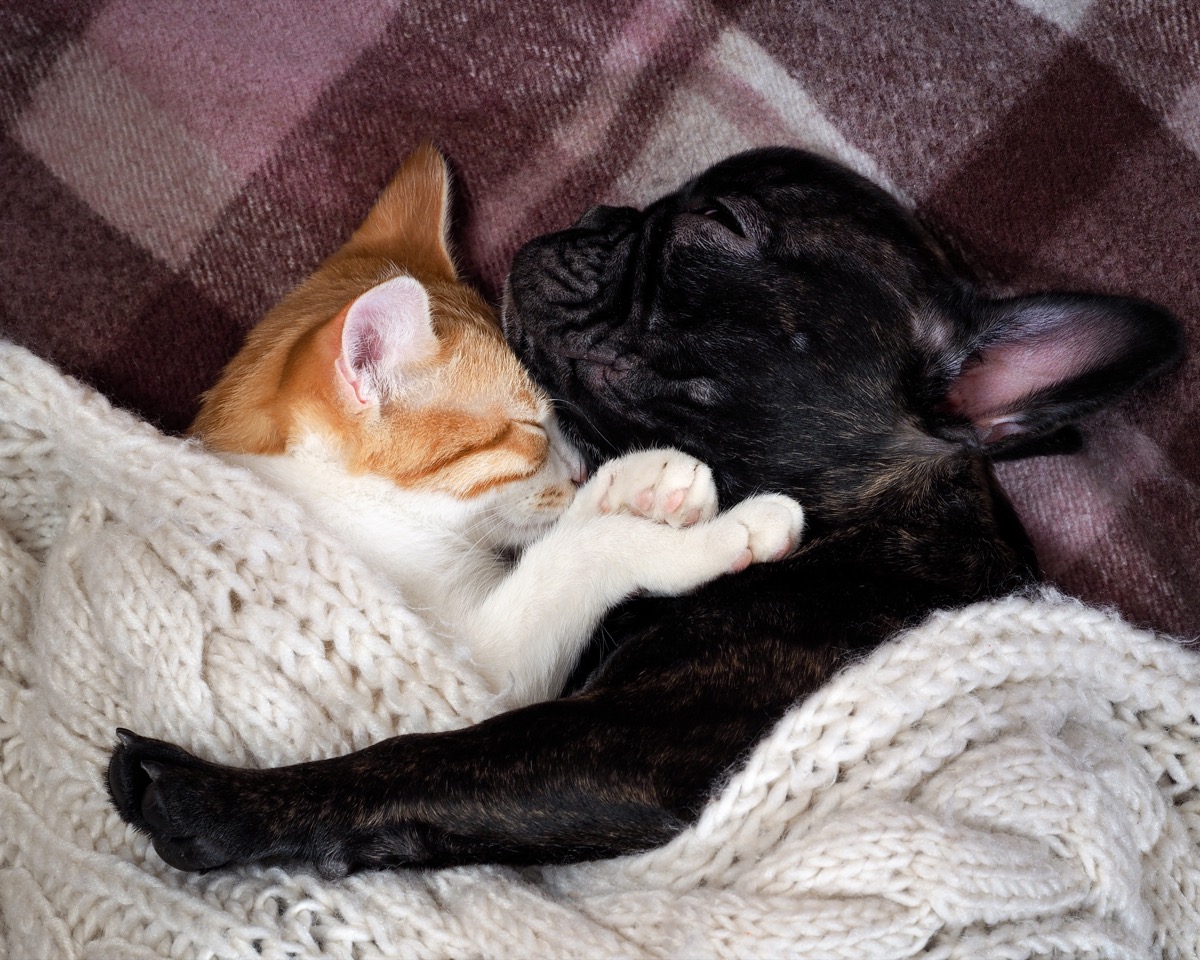 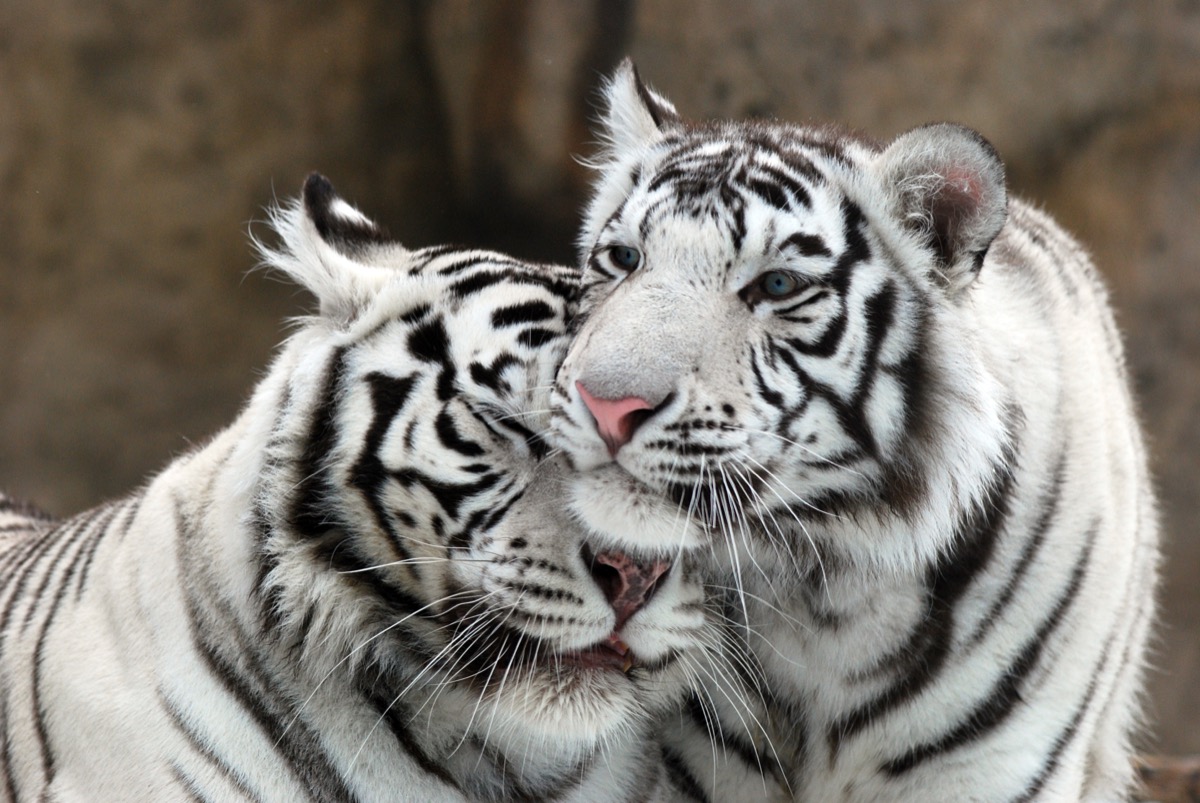 There's probably no animal in the animal kingdom we want to hug more than a tiger. And since we can't (for obvious reasons), we're glad these guys have the opportunity to cuddle one another. 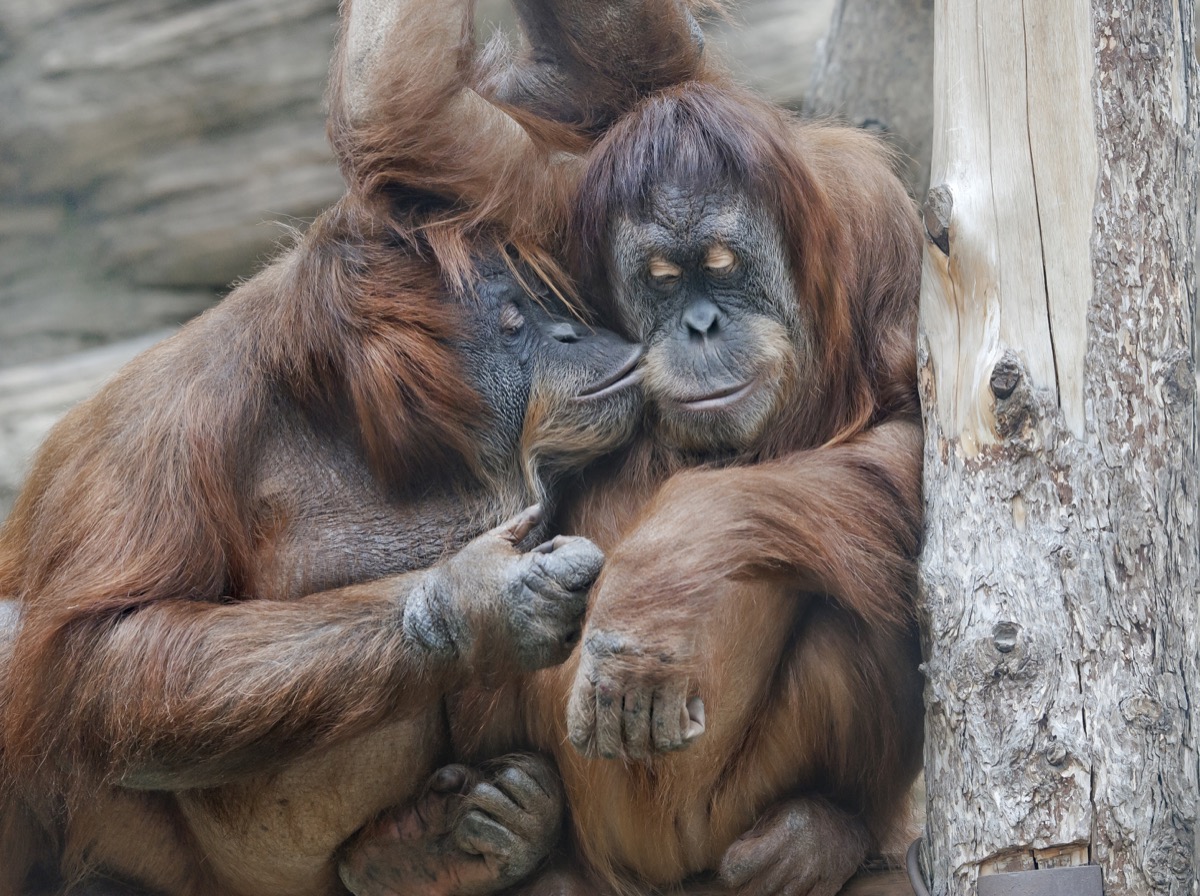 Since humans and apes are so similar, it's hard to look at this photo and not see the resemblance between these cuddly orangutans and a human family. And from the way they're holding each other close, we've got to say, it looks like love. 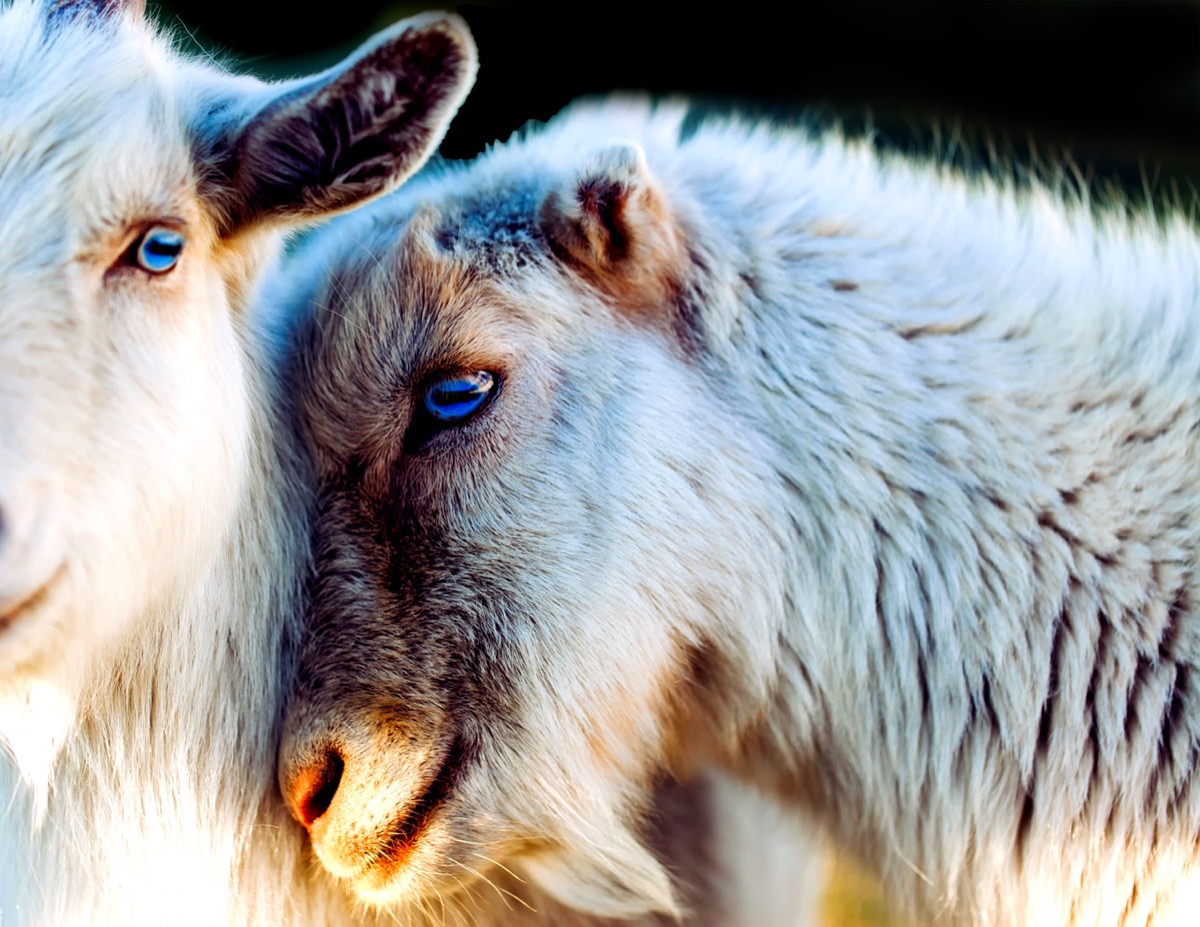 From the looks of things, these goats have clearly found the four-legged partner that makes their hearts beat a little faster. 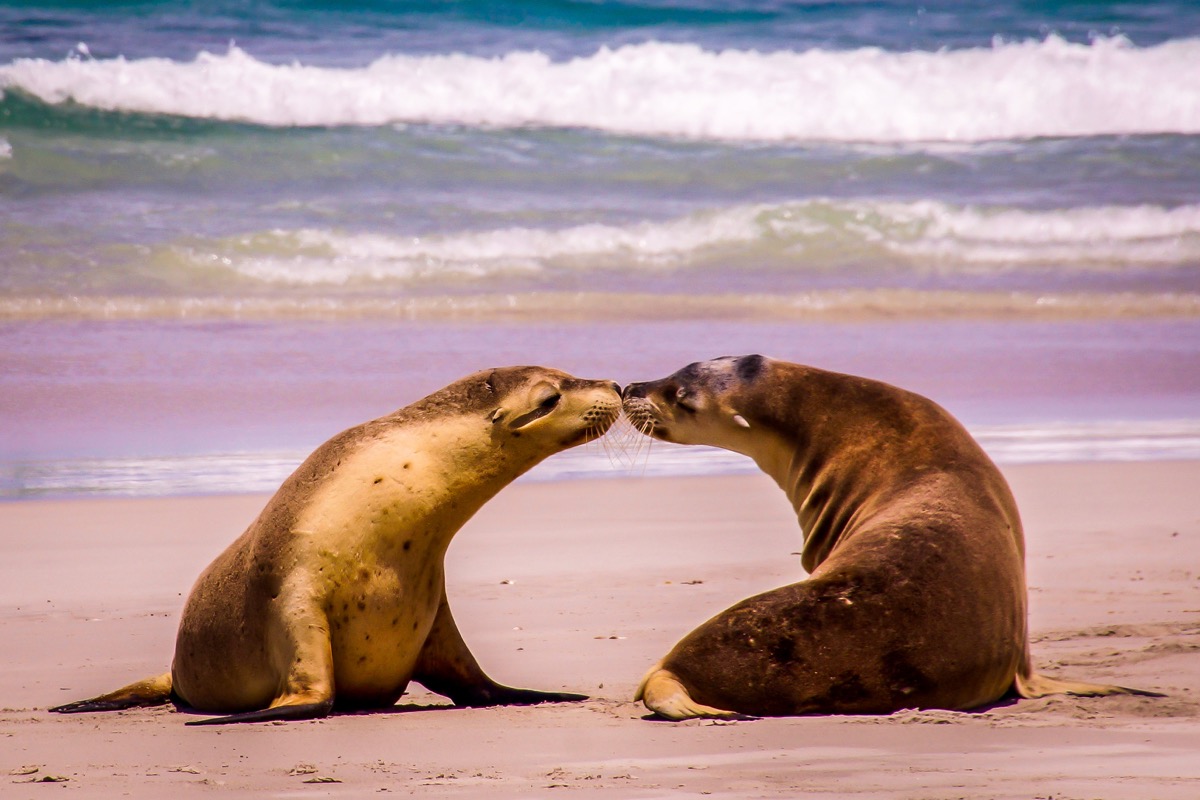 Seo lions are commonly referred to as the "dogs of the sea," which means it's unsurprising that they're just as prone to giving kisses as their grounded counterparts. These two sea lions look like they're giving each other the world's sweetest kiss!

19
Horses who are head over hooves for each other.

If you've ever been hopelessly in love, you've probably nuzzled noses at some point in your life. And from the looks of things, horses do this too! These ponies are clearly deep in love—or, at the very least, are best friends telling each other secrets.

20
A dog falls asleep on its feline love. 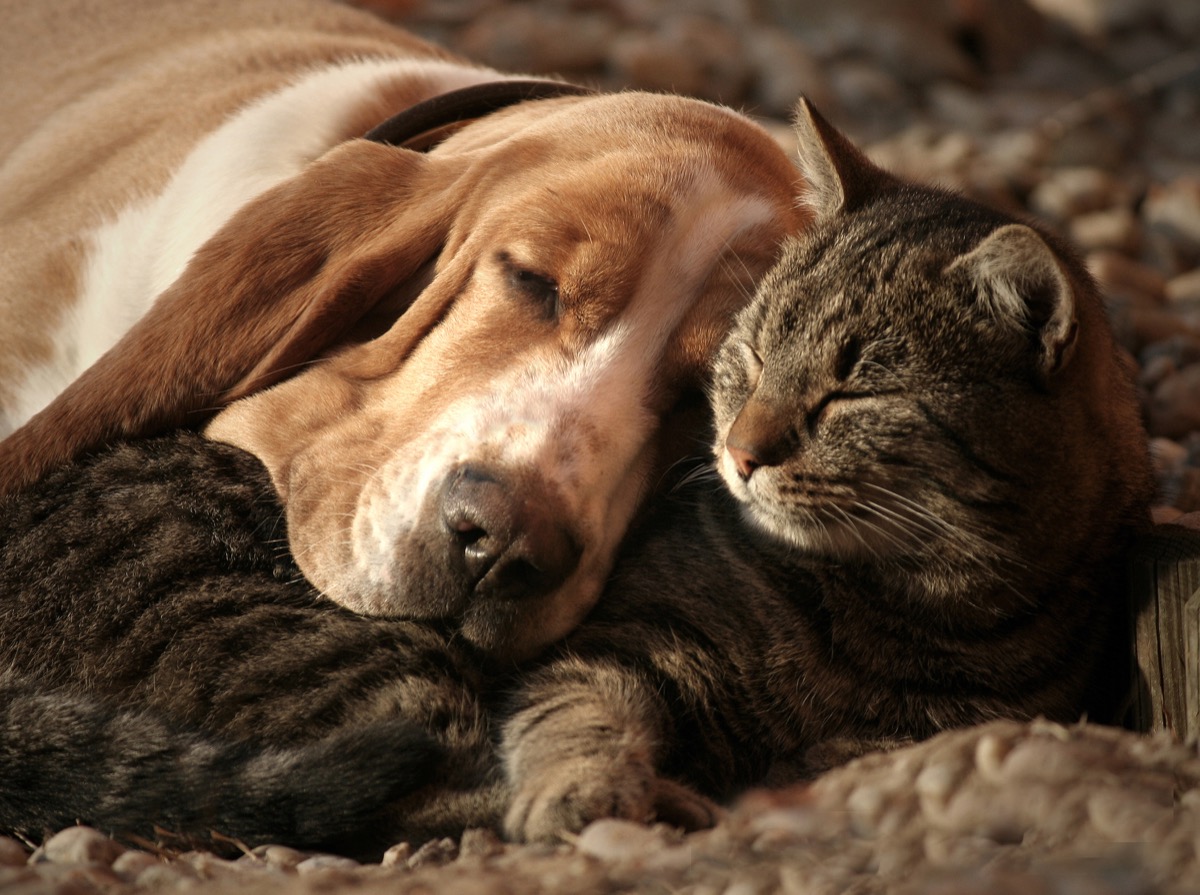 As you already know, dogs have big hearts—and it seems like this one fell completely head over paws for his feline friend. Love looks good on these two!

21
Rainbow Lorikeets find a moment to nestle in close to one another. 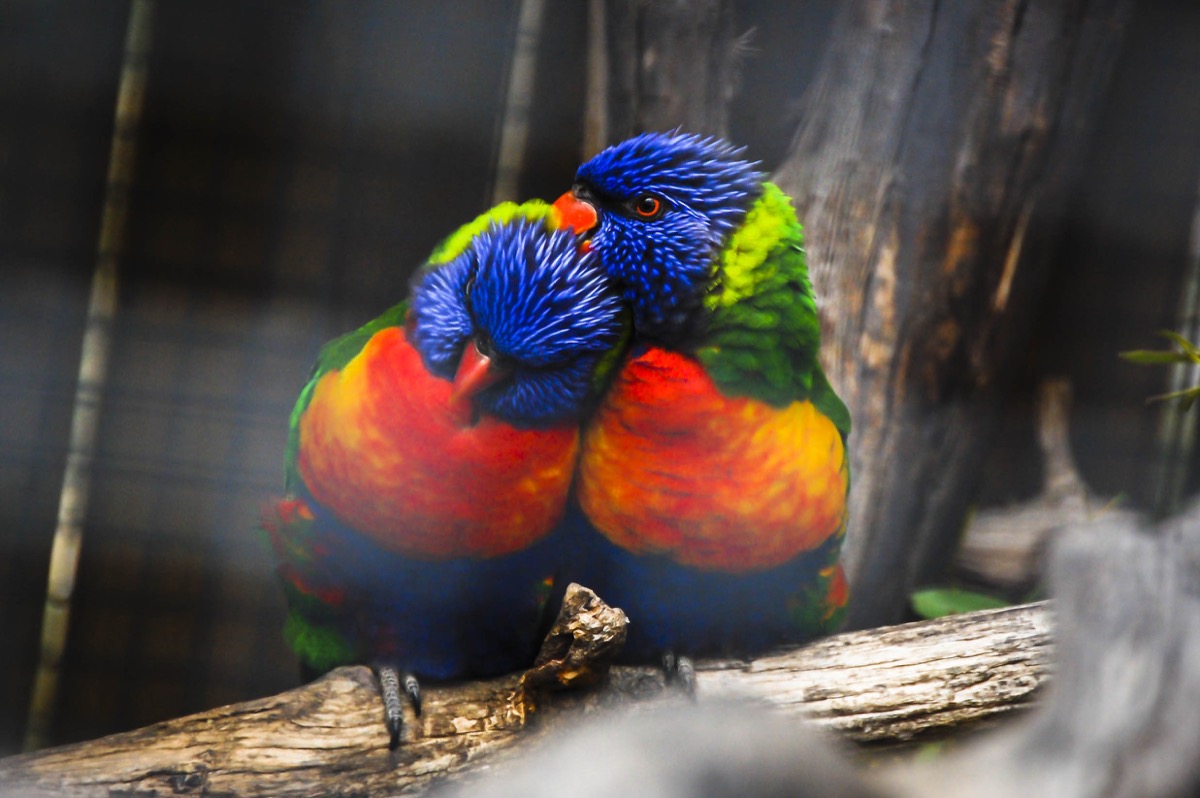 Similar to other birds, rainbow lorikeets mate for life, and often travel as a pair wherever they go—and perhaps stop occasionally for a good cuddle session, as seen here. 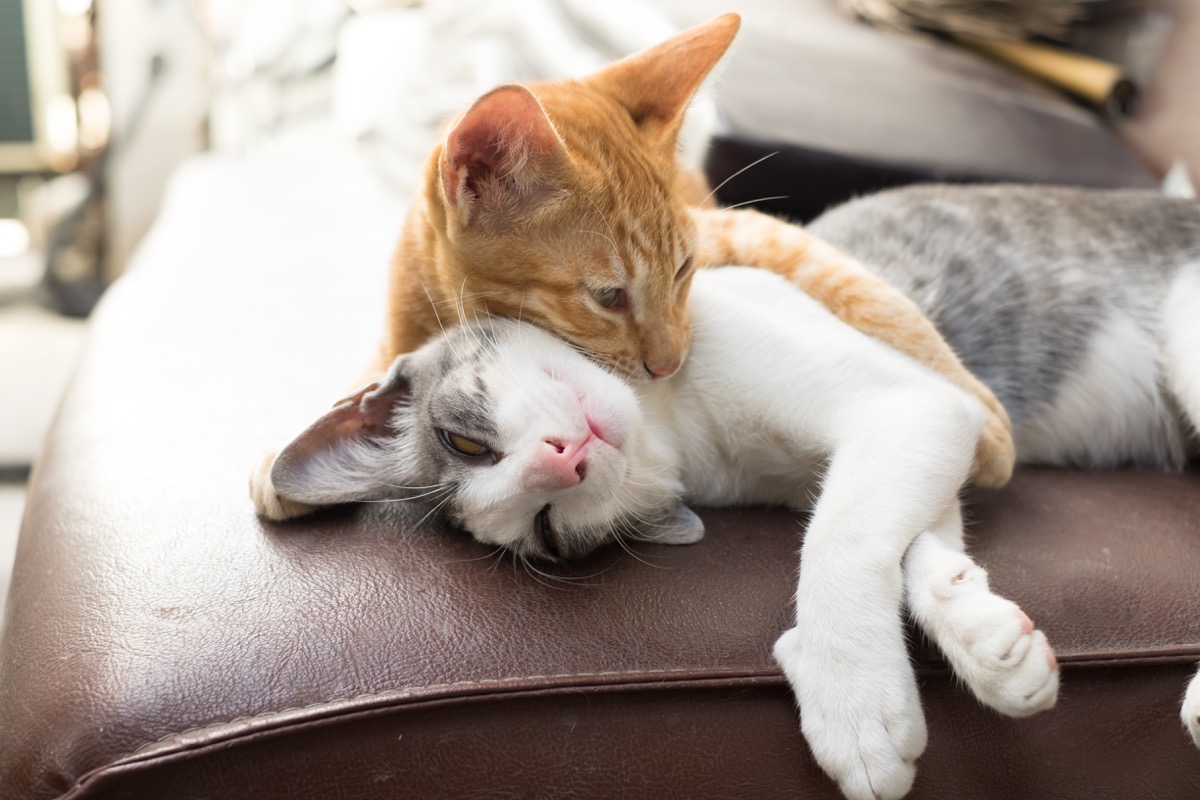 Though cats tend to be more restrained in their PDA than pups, they show their love in other ways. For example, as seen in this photo, cats will show they love others (including other cats!) by cuddling up close to them and vocalizing their affections with loud purrs and other sounds. 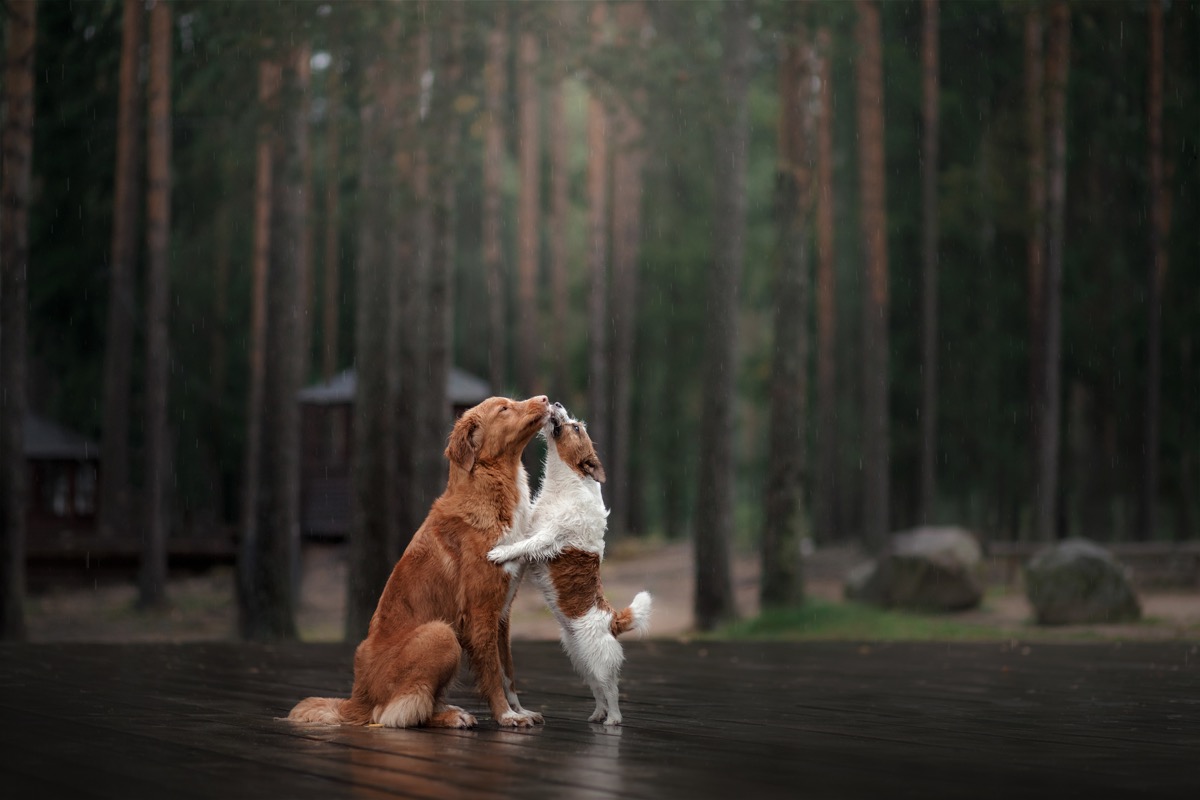 Dogs love public displays of affection, which means when you bring them together they're bound to show the love. Take this terrier-retriever duo, for example—this cinematic kiss is more romantic than The Notebook. And for more of the most adorable dogs on the planet, check out these 50 Dogs So Ugly They're Actually Cute.

Ashley Moor
Ashley hails from Dayton, Ohio, and has more than six years of experience in print and digital media. Read more
Filed Under
Animals • Entertainment • Fun Facts • Pets
Read This Next
Latest News
Read This Next