The 20 Weirdest Habits Animals Use to Keep Warm in Winter

One of the great advantages of being human in the winter months is good-ole human ingenuity. You know: puffy coasts, space heaters, hot cocoa, and all of the other amazing inventions we have at our fingertips that have made sub-zero temperatures survivable. But what about the rest of the animal kingdom? Ever wondered how fish manage to survive the arctic winter, or how mice manage to thrive in snow and ice, without the aid of a $1,000 parka from Canada Goose? Well, read on, because the truth about Mother Nature's cold-weather survival mechanisms will totally surprise you.

1
Emperor penguins cool the outer surfaces of their bodies. 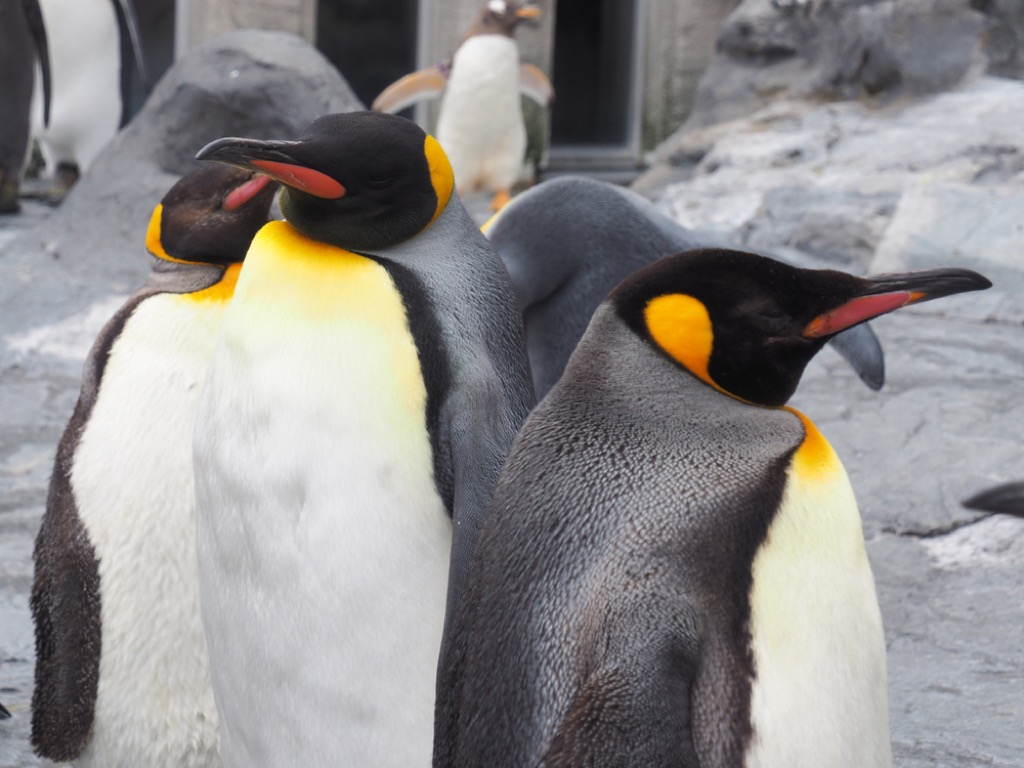 Yes, you read that right: In order to keep warm through the winter months, emperor penguins ironically must keep their feathers cooler than the air that surrounds them.

This unusual phenomenon was recently detailed in the journal Biology Letters, after scientists took thermographic images of the penguins and found that "most outer surfaces of the body were colder than surrounding sub-zero air owing to radiative cooling."

Evidently, this strategy allows the animals to gain back some of the body heat they lose via the process of thermal convection.

2
Fish in the Antarctic have antifreeze proteins. 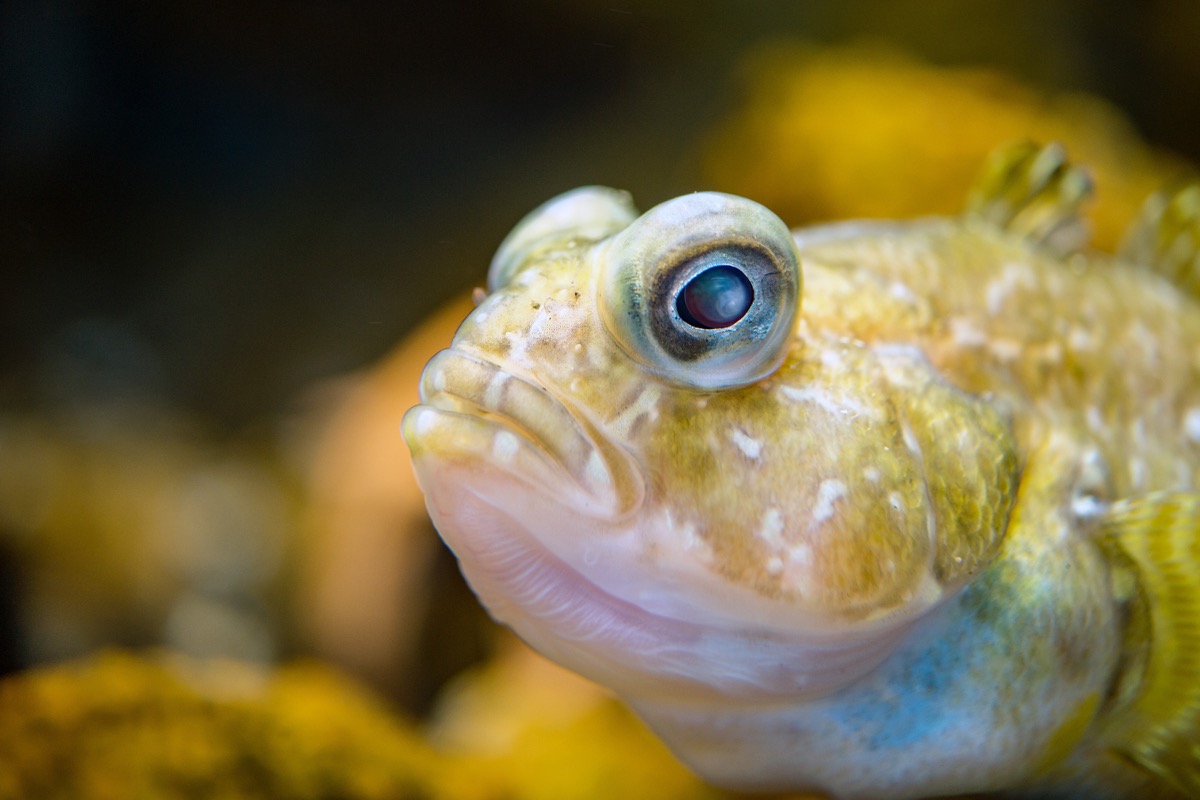 Given that oceans are made of water and water turns into ice when the temperature drops, it seems as though it shouldn't be possible for fish to survive anywhere near the continent of Antarctica—but that isn't the case. Rather, thanks to deep ocean waters that never freeze solid, combined with uniquely wonderful antifreeze proteins produced within their bodies, many polar and subpolar marine bony fish are able to go about their lives in relative comfort, despite the frigid temperatures.

The antifreeze proteins that these fish possess were discovered in the early 1960s by then Stanford graduate student Dr. Art DeVries. In his research, DeVries found that when these fish entered freezing waters, the proteins attached to ice crystals inside the body and inhibited their growth. 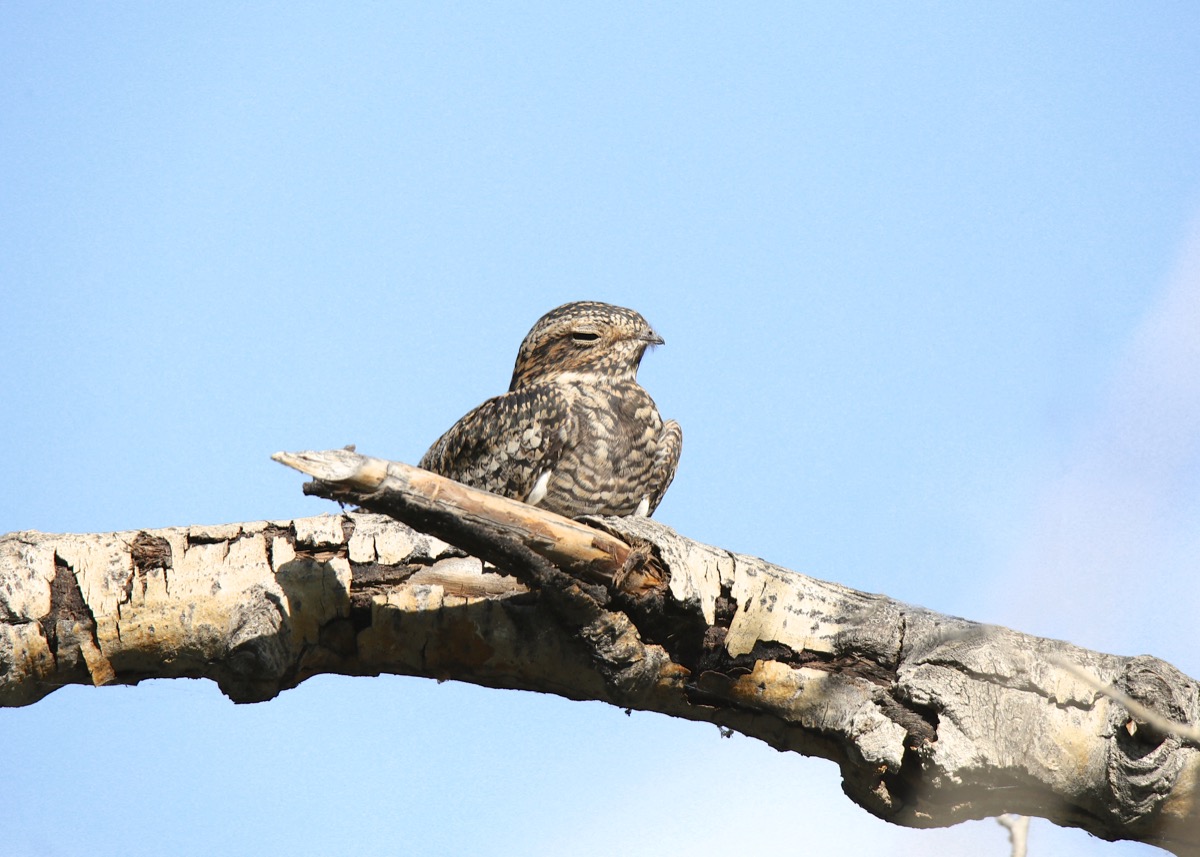 When food and sustenance is limited—like in the winter months—many bird species will conserve their energy by going into a short period of hibernation known as torpor. One species in particular—the common poorwill—is even able to stay in torpor for an extended period of time, decreasing their heart rate and reducing their body temperature to conserve energy until the ground is thawed and they can once again forage for insects. 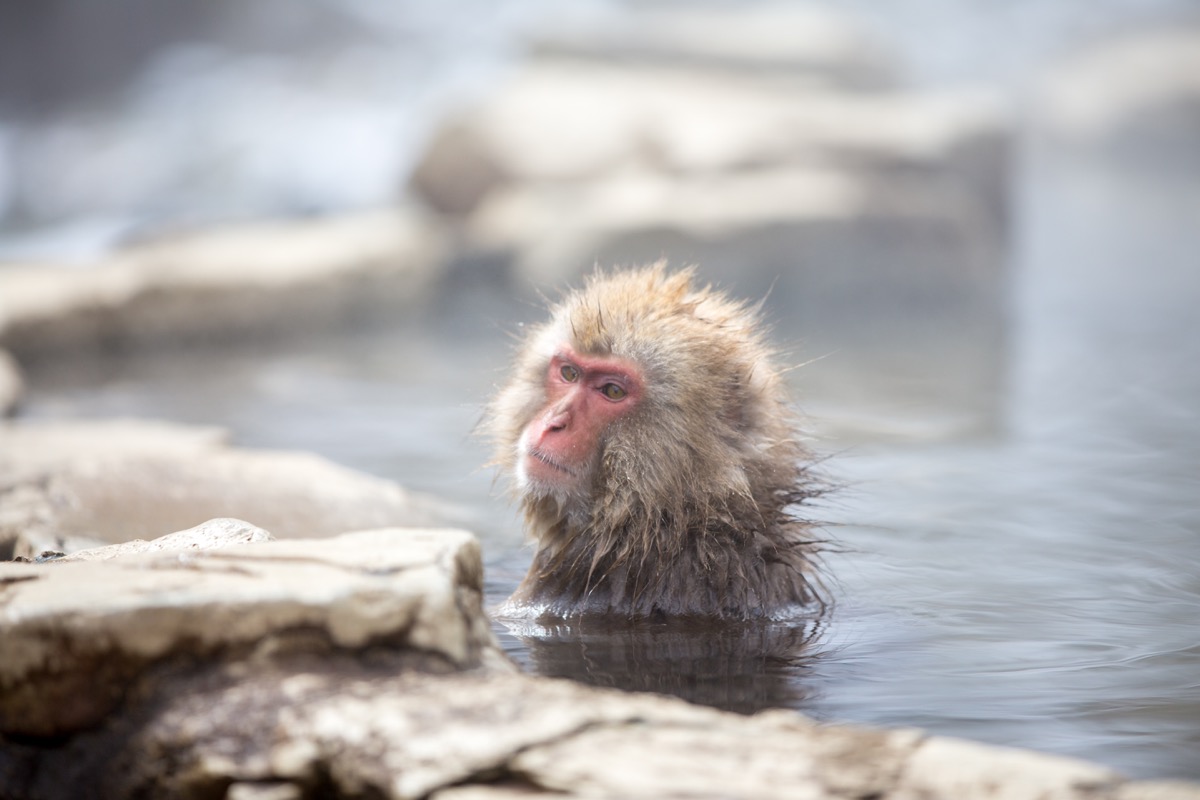 In the particularly frigid Jigokudani valley of Nagano prefecture, scientists have documented the phenomenon of local macaques bathing in hot springs on numerous occasions. According to one recent study published in the American Journal of Primatology, this behavior is "clearly influenced by ambient air temperature," meaning that the primates bathe in the hot springs not to get clean, but because they want to stay warm. 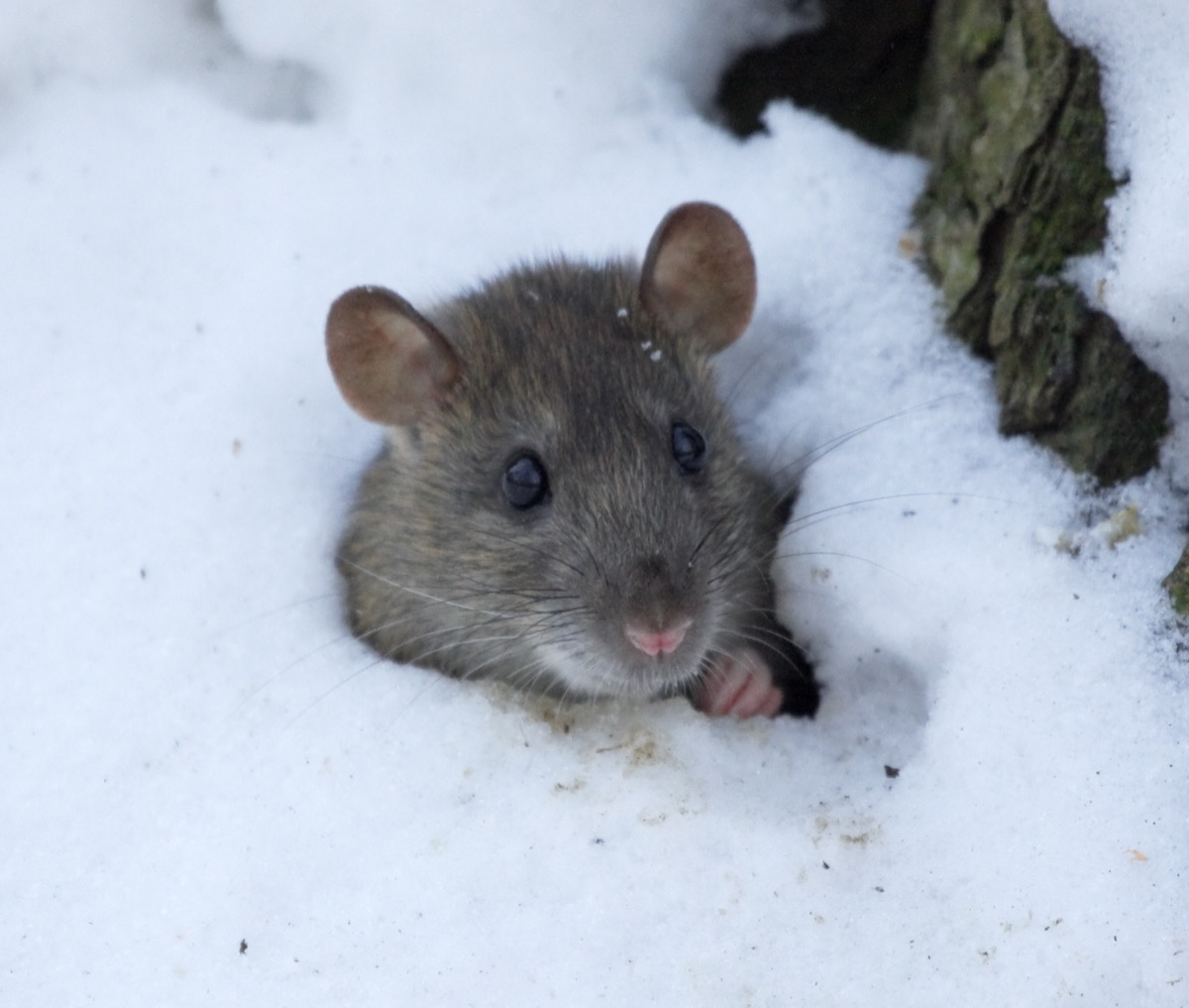 You'll be hard-pressed to find a mouse, mole, or shrew walking around aboveground once the first snowfall settles. Why? In order to stay warm through the winter, these small rodents remain in an area between the snow and the ground known as the subnivean zone, where the heat coming up from the ground is trapped (like in an igloo) and the temperature is always at least 32°F.ae0fcc31ae342fd3a1346ebb1f342fcb

6
The arctic musk ox has a special undercoat. 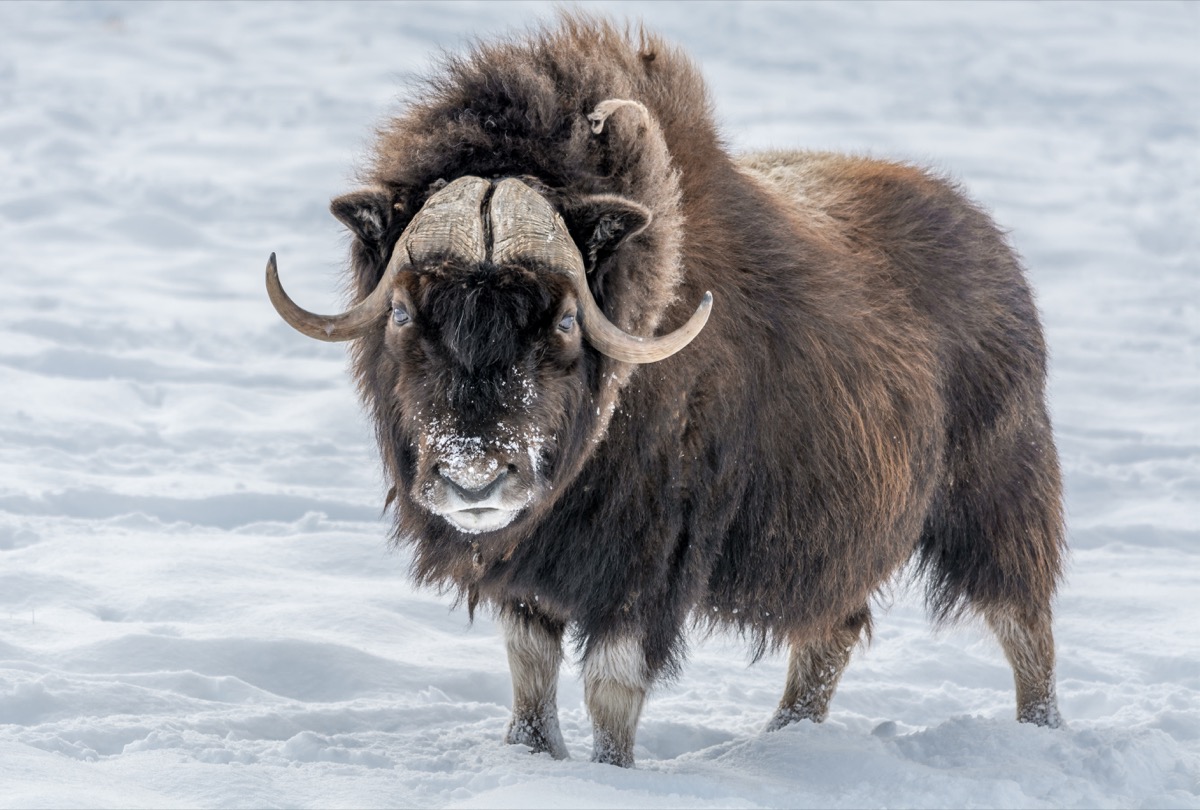 Similar to the down feathers of certain birds, the arctic musk ox has a special undercoat that helps them remain seemingly impervious to the winter chill. Called qiviut, this coat keeps the animal warm when the temperature drops well below freezing. 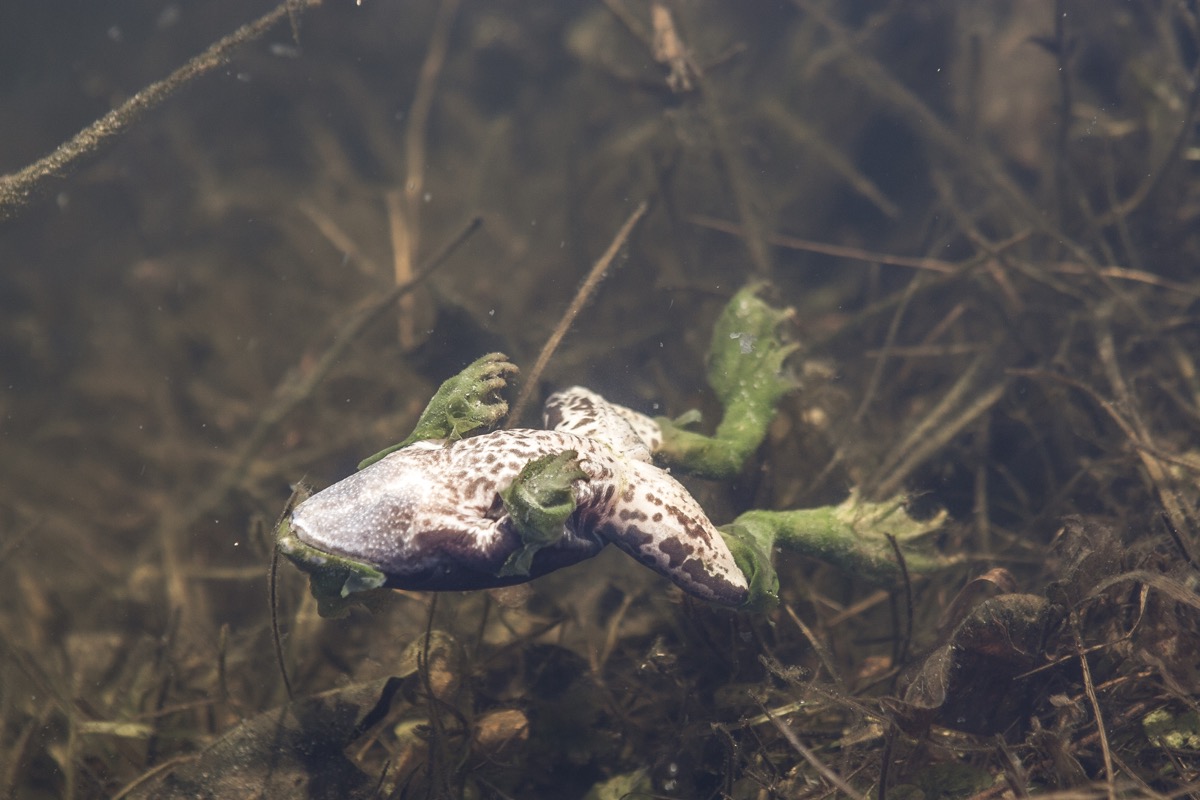 Rather than figuring out a way to stay warm through the winter, wood frogs survive by literally becoming frozen solid and waiting to thaw out until the temperature rises. Evidently, these amphibians are freeze-tolerant, meaning that they can be frozen alive and still survive.

8
Freshwater turtles put themselves in a coma-like state. 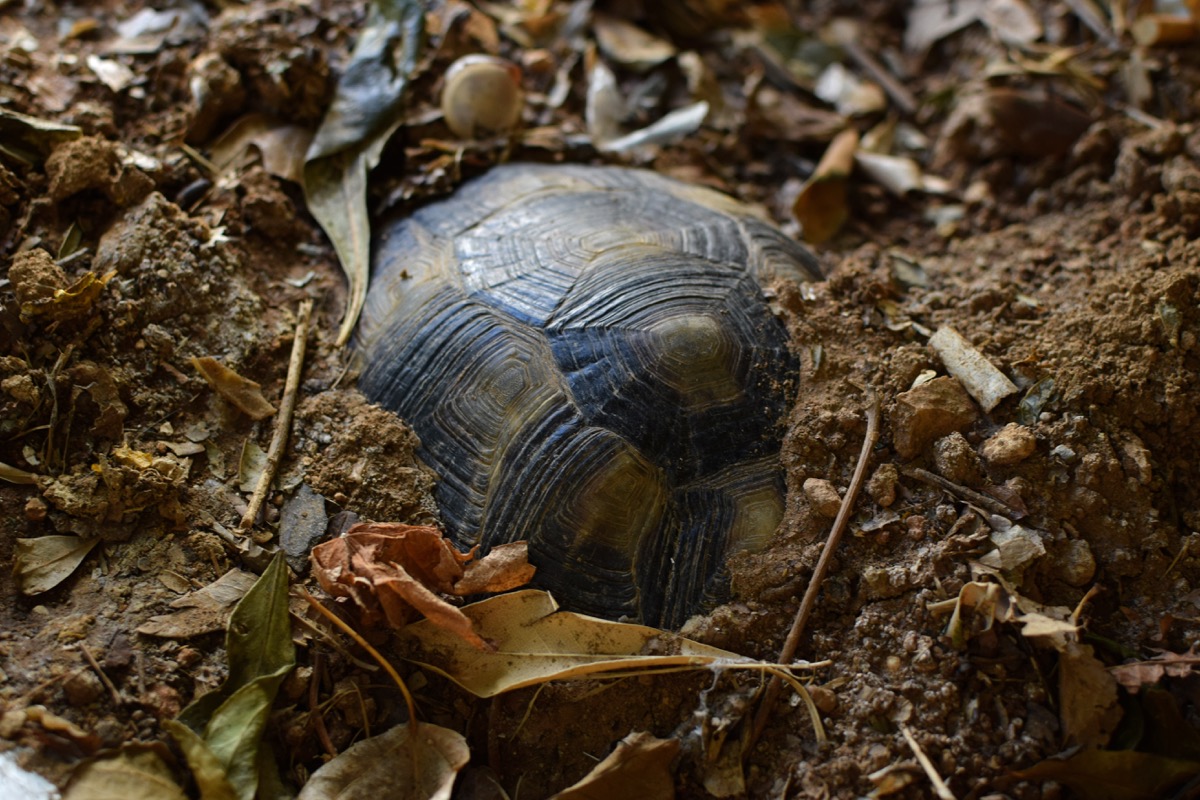 According to one study published in the journal Temperature, freshwater turtles suppress their metabolisms and conserve energy via anaerobic breathing in order to survive the winter months. Like many other animals who hibernate, turtles require almost no food throughout the winter season, as almost all of their bodily functions (save for the essential ones like breathing) are halted until spring arrives.

9
Emperor penguins huddle together for warmth. 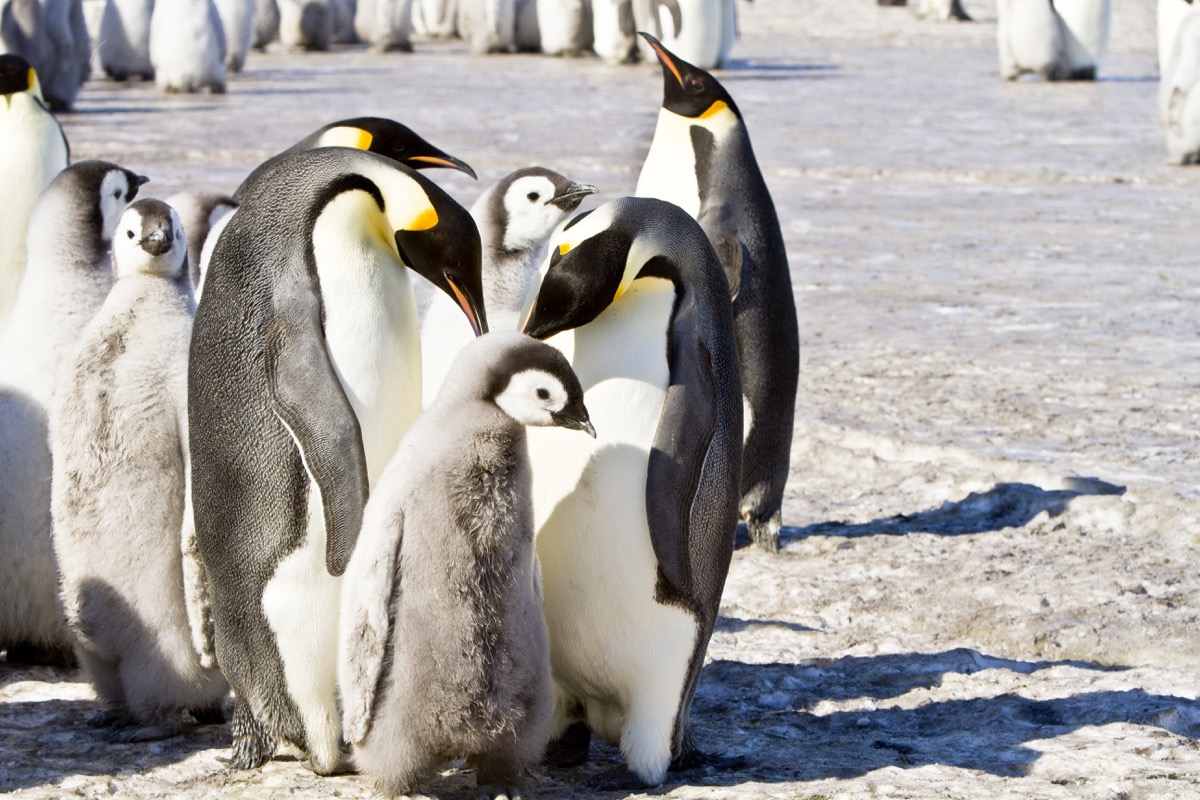 Given the frigid environments they live in, emperor penguins have not one but several different ways of staying warm in the winter. In addition to cooling the outer surfaces of their bodies, these creatures huddle together in giant groups in order to both conserve body heat and avoid the intense Antarctic winds. This method of staying warm is so successful, in fact, that research published in Animal Behaviour recently found that the penguins must rotate their positions every so often because those in the middle of their huddle will actually overheat.

10
The Alpine swift stays in the air for months at a time. 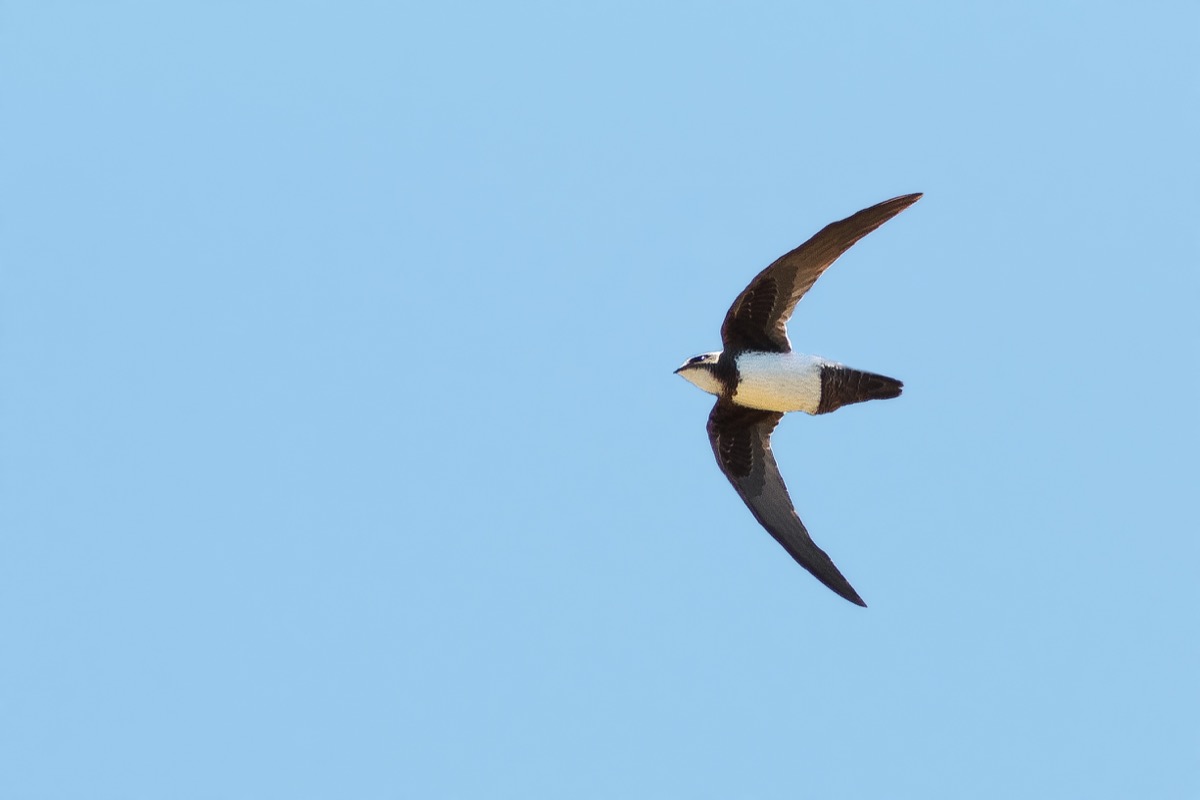 When the ground becomes too cold for inhabitation, Alpine swifts take to the skies and stay there for six months. And believe it or not, the birds don't even have to stop for sleep or sustenance—they can survive off of plankton in the air, and scientists speculate that they rest up during short periods of gliding.

11
Whales trap in their body heat with a layer of fat. 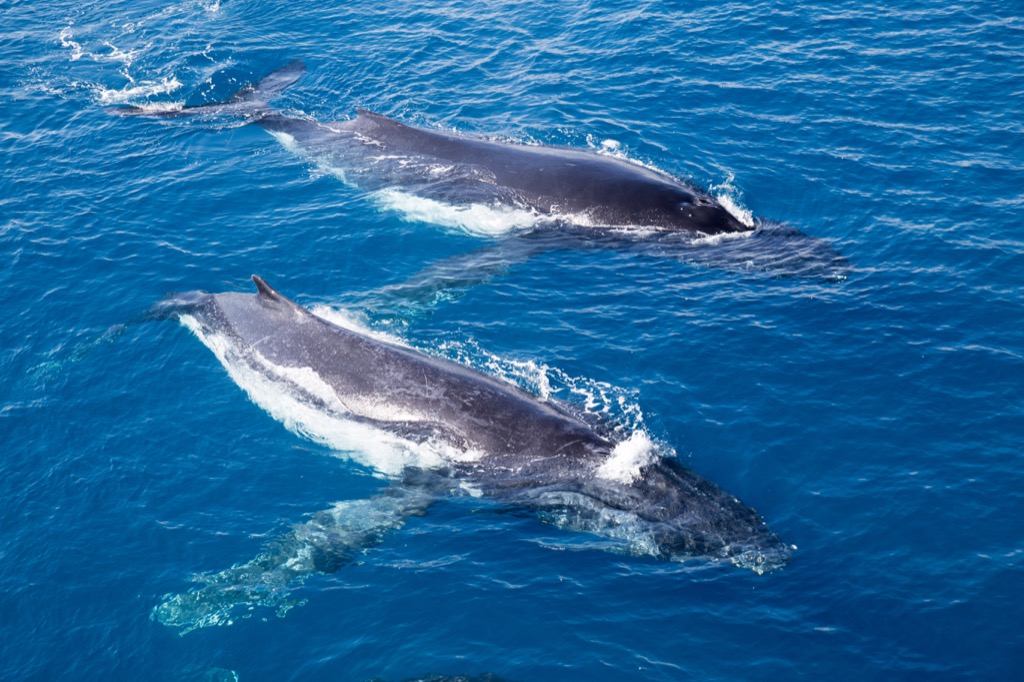 Marine mammals like whales and walruses have a thick layer of fat directly under their skin called blubber. This tissue helps during the winter months both by trapping in heat and by storing energy that can be used as fuel when sustenance is sparse.

The fat-tailed dwarf lemur is the only primate in the world that is able to hibernate for lengthy periods of time, often going into hibernation for up to seven months. This is thanks to their tails, which store so much excess fat that by the time hibernation comes around, they account for as much as 40 percent of the small animal's total body weight.

Aside from the help it gets from the fat in its tail (and the occasional protection of a well-insulated tree), the fat-tailed dwarf lemur doesn't otherwise maintain its body heat during hibernation, meaning its temperature fluctuates along with the weather.

13
Black bears use their urine to maintain muscle mass. Most people are already aware of the fact that black bears drift off into a deep sleep when winter arrives, but few people actually know how these animals are able to survive for so long without ever going outside. Well, when University of Wyoming researcher Hank Harlow tracked black bears throughout their hibernation periods, what he found was that they never urinated and only lost an average of 25 percent of their strength. But how are these two things related?

"When you get out in the morning and [urinate], you are [urinating] out a lot of nitrogen," Harlow explained to Cool Green Science. "[The bears] are recycling it into their blood, then guts, and then to the liver. The liver is where they make the amino acids, and then the skeletal muscle is resynthesized. What they lose in muscle mass is recycled." 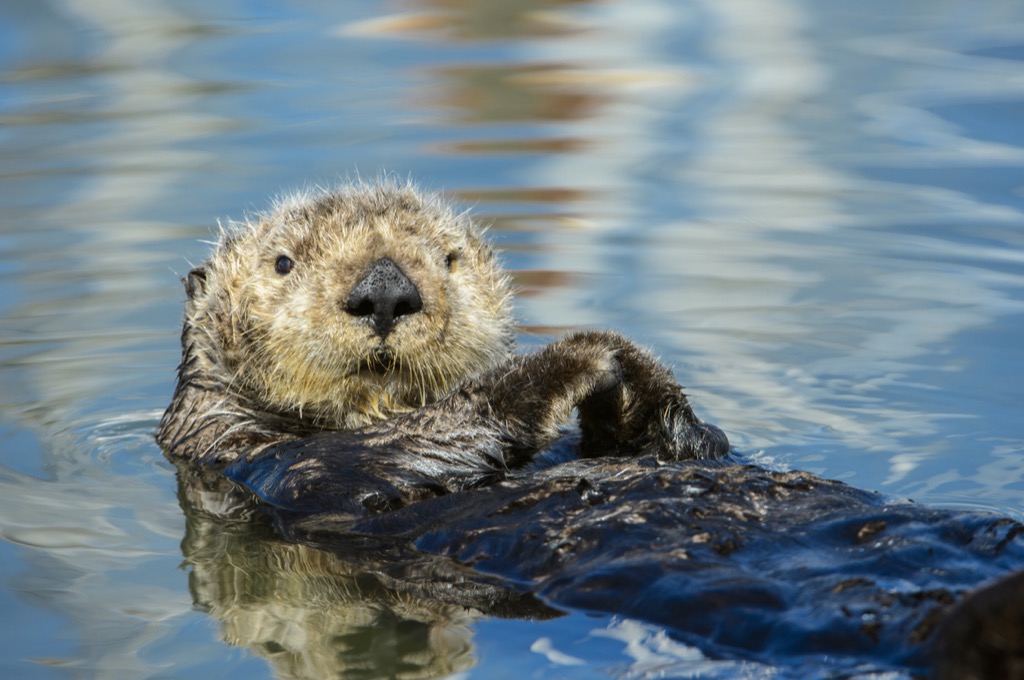 Since sea otters are the only marine animals without a layer of blubber, they rely on their uniquely dense fur coats to keep warm. As marine biologist Jim Bodkin explained to PBS, the creatures have up to one million hairs per square inch keeping them insulated. (In comparison, your canine companion has just 60,000 hairs per square inch.)

When temperatures drop below 40 degrees, alligators enter into a hibernation-like state known as "brumation," in which their metabolisms are slowed and they stay in one place until the weather warms up. If only we could all do that when the weather plummets!

16
Snow leopards use their tails as blankets. 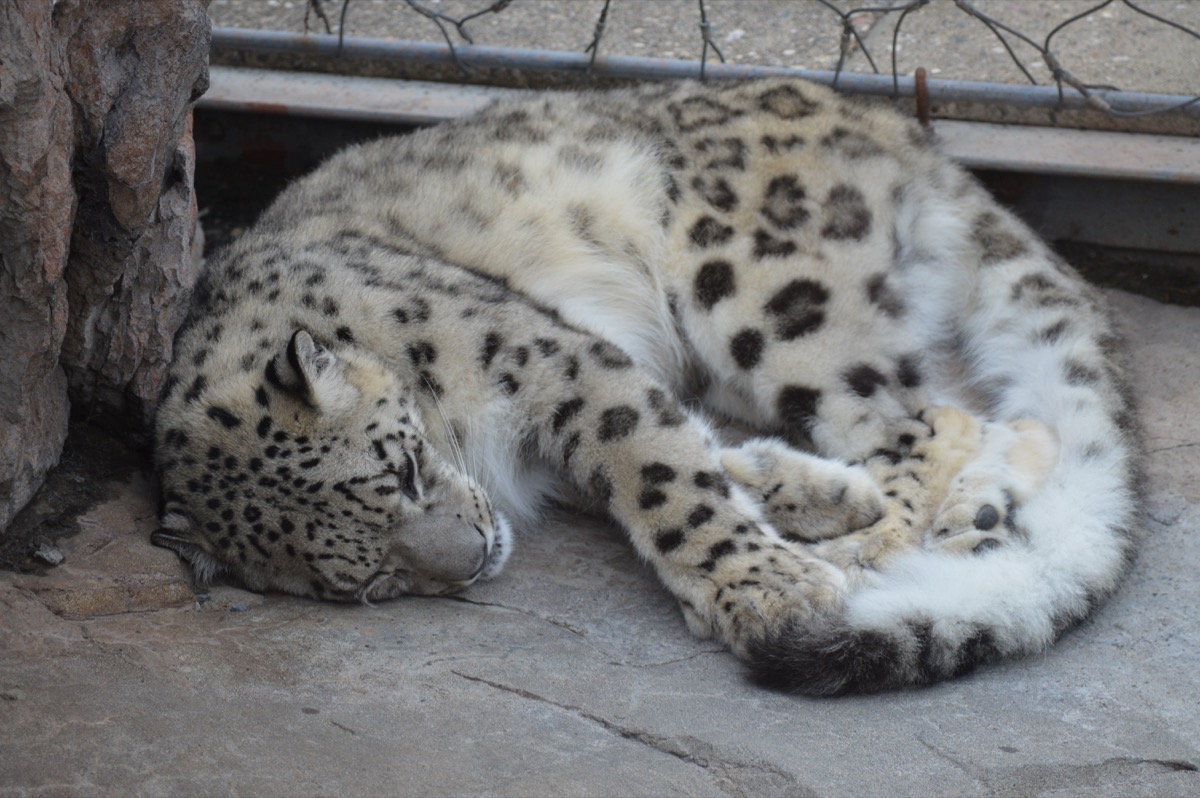 As their name suggests, snow leopards have the ability to survive even the harshest climates and conditions. But how? Well, along with their thick fur and enlarged nasal cavities—the latter of which helps them breathe in frigid temperatures and at high altitudes—snow leopards have especially long tails that they can use like a blanket to keep themselves nice and cozy.

17
Birds fluff out their feathers to trap in warm air. 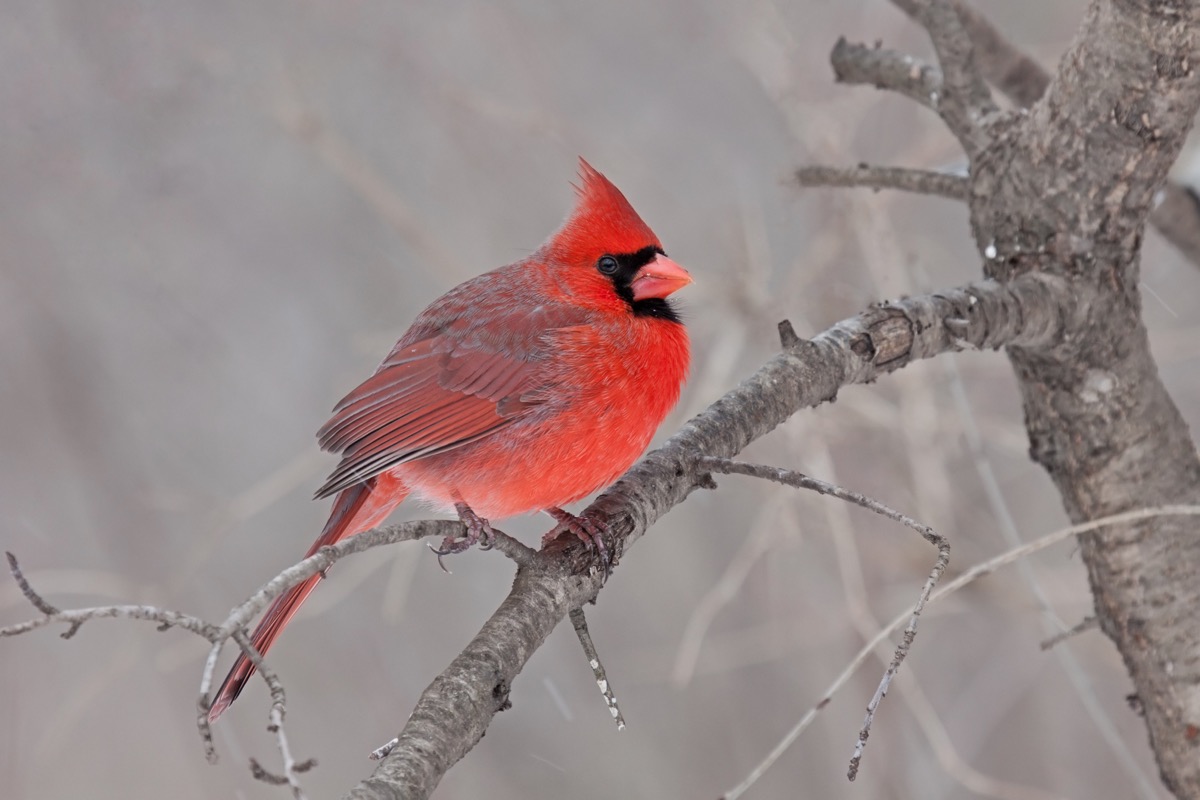 Those birds in your backyard might look rounder during the winter months, but it's not because they're gaining weight. "They're literally fluffing their feathers out," Marion Larson, education chief at the Massachusetts Division of Fisheries & Wildlife, explained to WBUR. "They've got their built-in down coats and just the more air you trap in there, the body heat keeps you warm and keeps you insulated."

Given how much time polar bears spend in the water—often in below-freezing temperatures—you'd expect the burly beasts to be soaking wet and freezing cold all the time. However, it seems that Mother Nature thought about this dilemma when she created the bears, seeing as they have a special oily layer on their fur that makes it water repellent and prevents ice from forming.

19
Mallards have a unique circulation system. 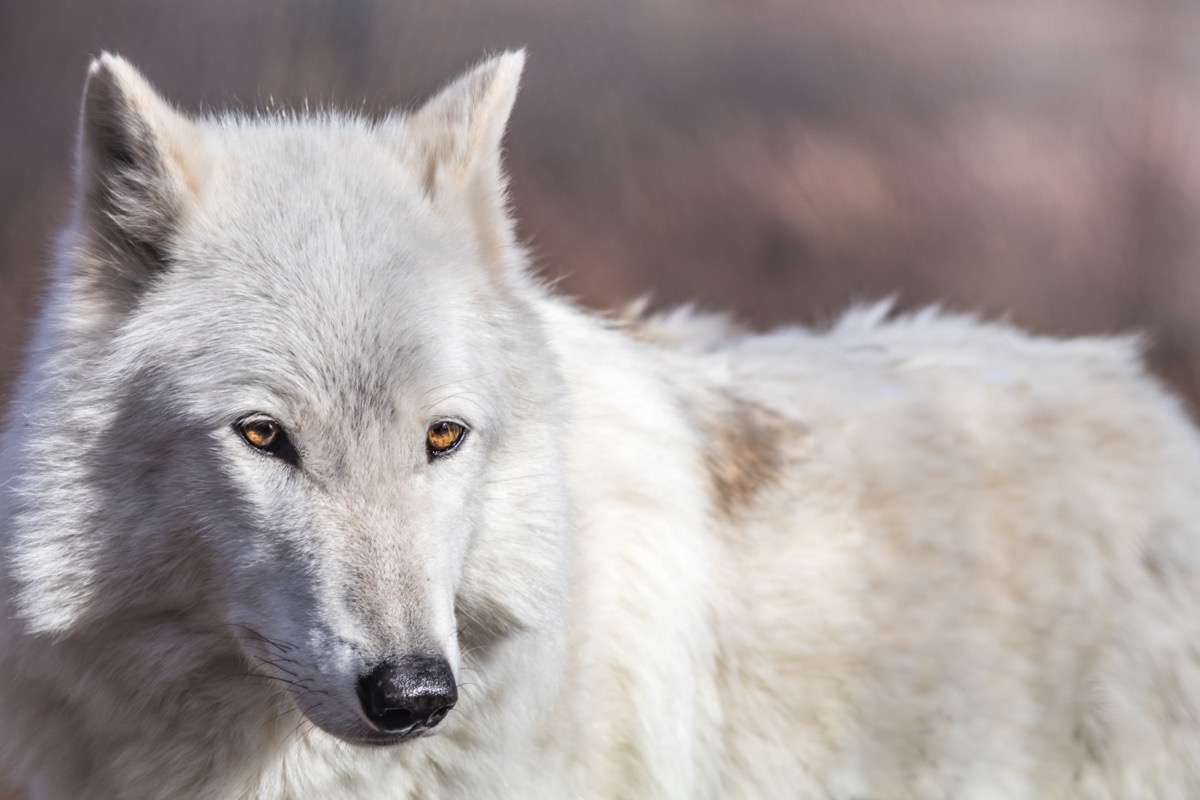 Because arctic wolves tend to live in climates that can reach temperatures as low as -30°F, these animals have two layers of fur that both provide insulation and serve as a waterproofing barrier.