20 Bizarre Sea Creatures That Look Like They're Not Real

Meet the "fish" that are stranger than fiction.

By most estimates, we've explored somewhere around 5 percent of our oceans. What we have charted, however, has turned up some seriously curious discoveries—namely: about a bazillion creatures that look like they're straight out of a Salvador Dali brainstorm session. We're talking about the Blob Sculpin, or the Tasseled Wobbegong, or the aptly-named Terrible Claw Lobster. Honestly, there are too many stranger-than-fiction fishes out there to name—but we've cobbled together the 20 most unbelievable here. Look on and weep. And even if these unusual-looking sea creatures have scared your family off the beach this season, you can still wow dad with one of these 30 Unique Father's Day Gifts for the Dad Who Has Everything. 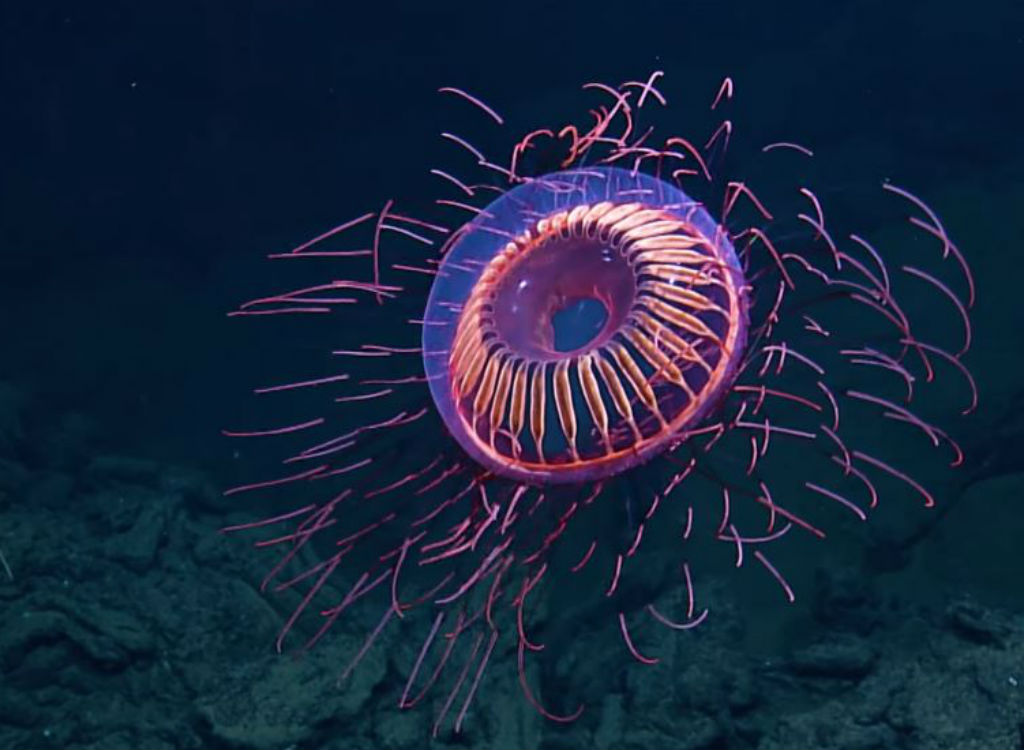 This brightly colored sea-dweller, dubbed the Halitrephes Massi jellyfish, lives in the Eastern Pacific Ocean and is rarely seen by humans. So, what's behind its stunning array of colors? Canals that move nutrients through the jellyfish's body reflect light to make this brilliant display. The blob sculpin—the deep-water equivalent of Grumpy Cat—is a miserable-looking fish that lives in very deep water in the both the North Pacific and Bering Sea. While this bottom-feeder may look perpetually bored and bummed out, they actually keep pretty busy on the ocean floor. Sculpins fan their eggs to keep them free of sand, which is an unusual behavior for deep sea fish, who tend to be a bit more lax when it comes to parenting their offspring. And for more cool info about what's going on in our oceans, check out these 30 Facts About the World's Oceans That Will Blow Your Mind. 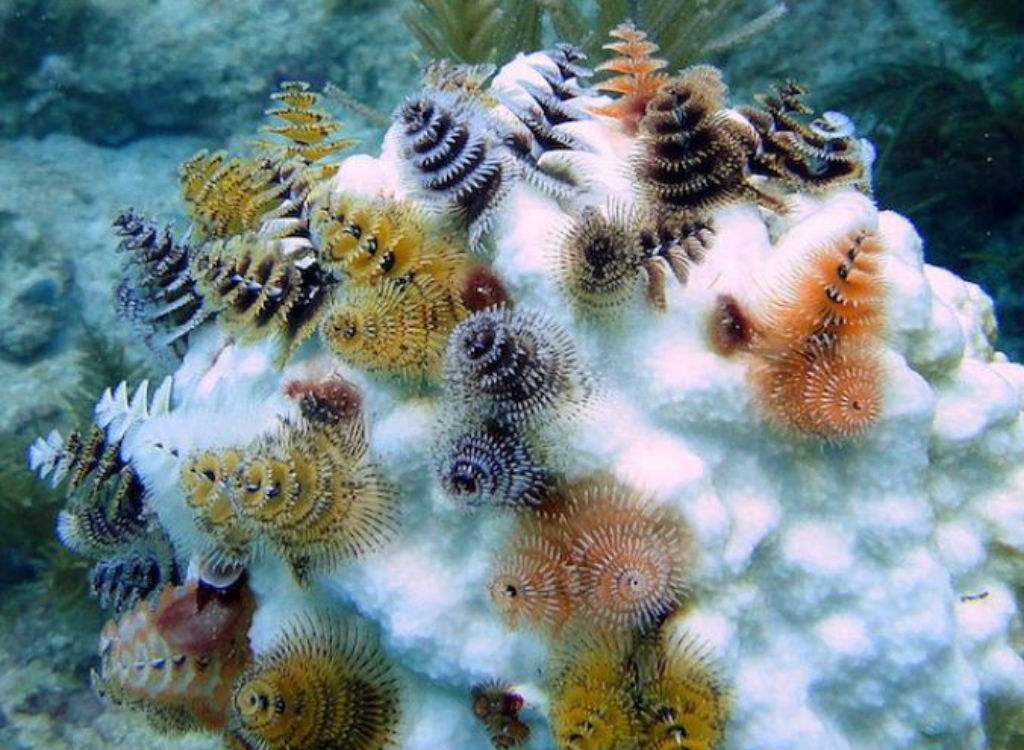 Christmas Tree Worms, which can be found in warm, tropical waters ranging from the Caribbean to Indonesia, earned their name from the tree-like appendages that protrude from their top. The part of this worm that looks like a Christmas tree is actually its mouths, however, and the feathery bits are tentacles that push food toward its digestive apparatus. 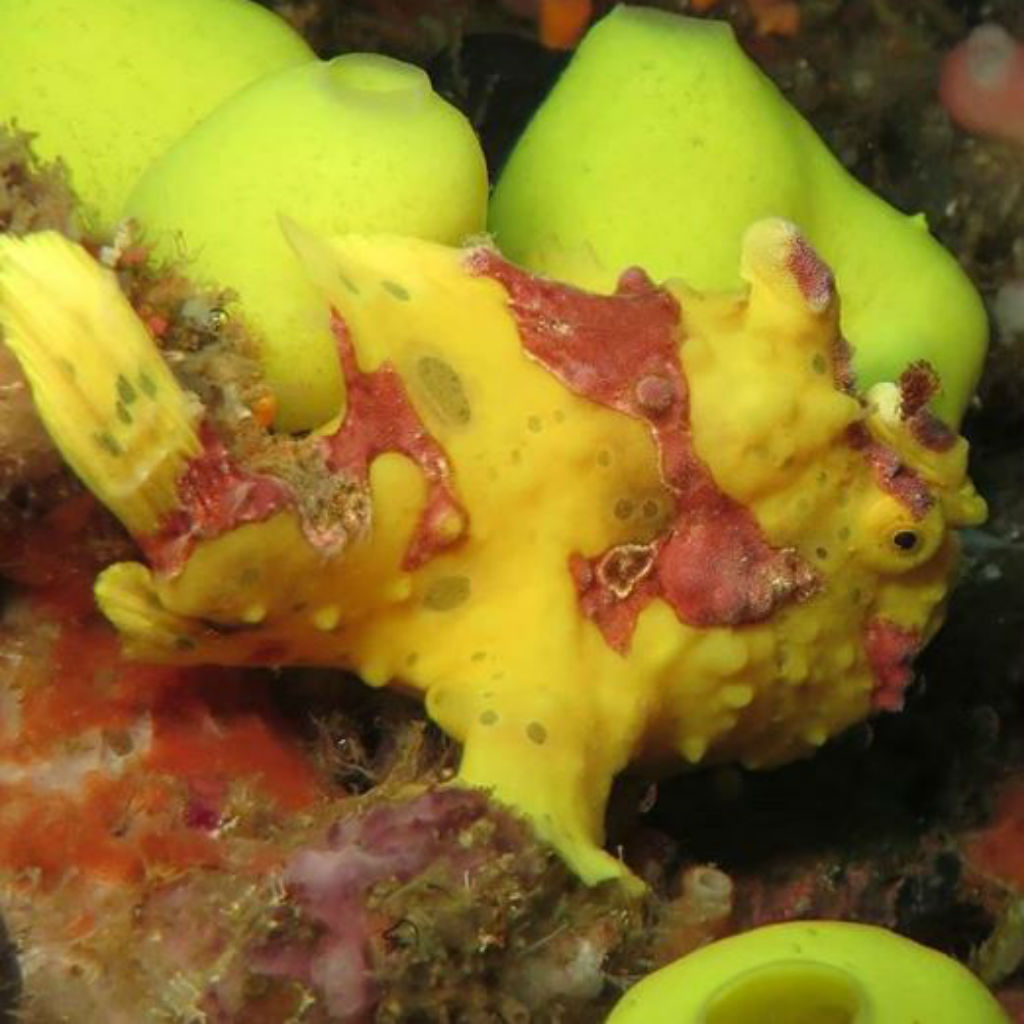 The clown frogfish hangs out among coral, and can clearly camouflage itself accordingly, although changing its appearance does take a few weeks. Its mouth is big enough that it can eat prey its own size, meaning you might see one of these brightly-colored fish snacking on prey up to 5.9 inches long. And if you want to know what else is lurking in the sea, check out these 30 Reasons Why the Ocean Is Scarier Than Space 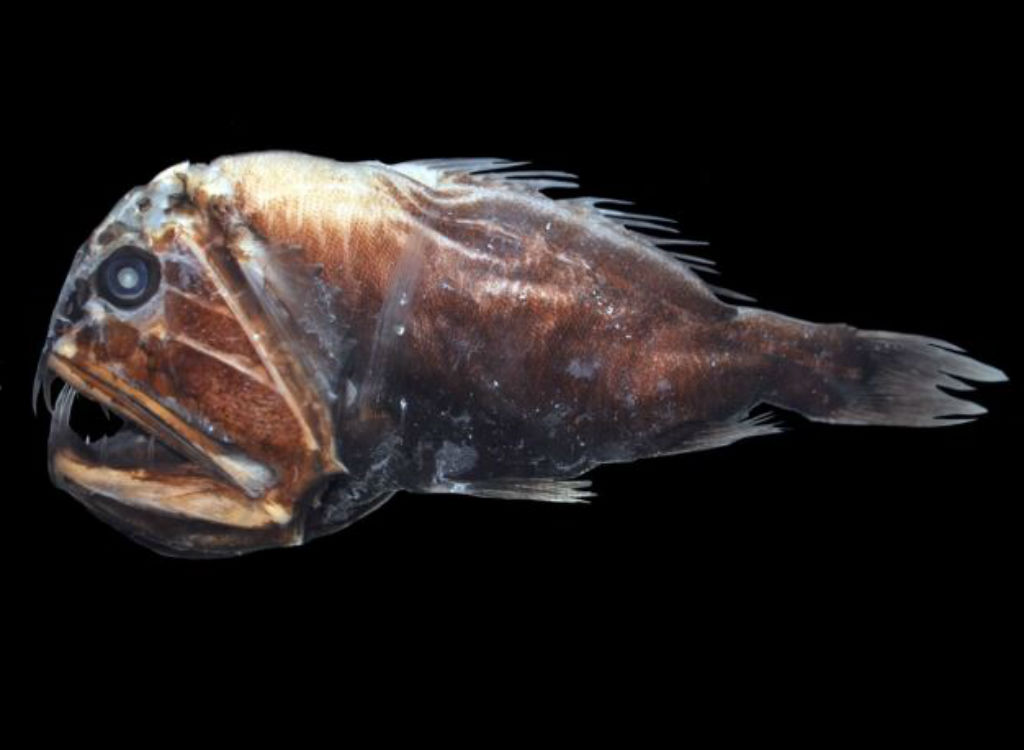 Think sharks are the only terrifyingly-toothy residents of the ocean? Think again. In fact, adult fangtooth, commonly found around the world in tropical and cold-temperate waters, have the largest teeth of any fish in the ocean, proportionate to body size. But don't worry, your fears of a fangtooth attack are largely unfounded: they live in the deep sea, and although their teeth look enormous, a large fangtooth is only six inches long. Despite its name and eel-like appearance, the gulper eel isn't a true eel—it's just another kind of fish. Gulper eels, which live in ocean depths of up to 10,000 feet, do have one extraordinary feature aside from their frightening teeth: bioluminescence. They've also got another trick up their proverbial sleeves: because of their distinctive jaws, some gulper eels can actually consume prey that's bigger than they are. 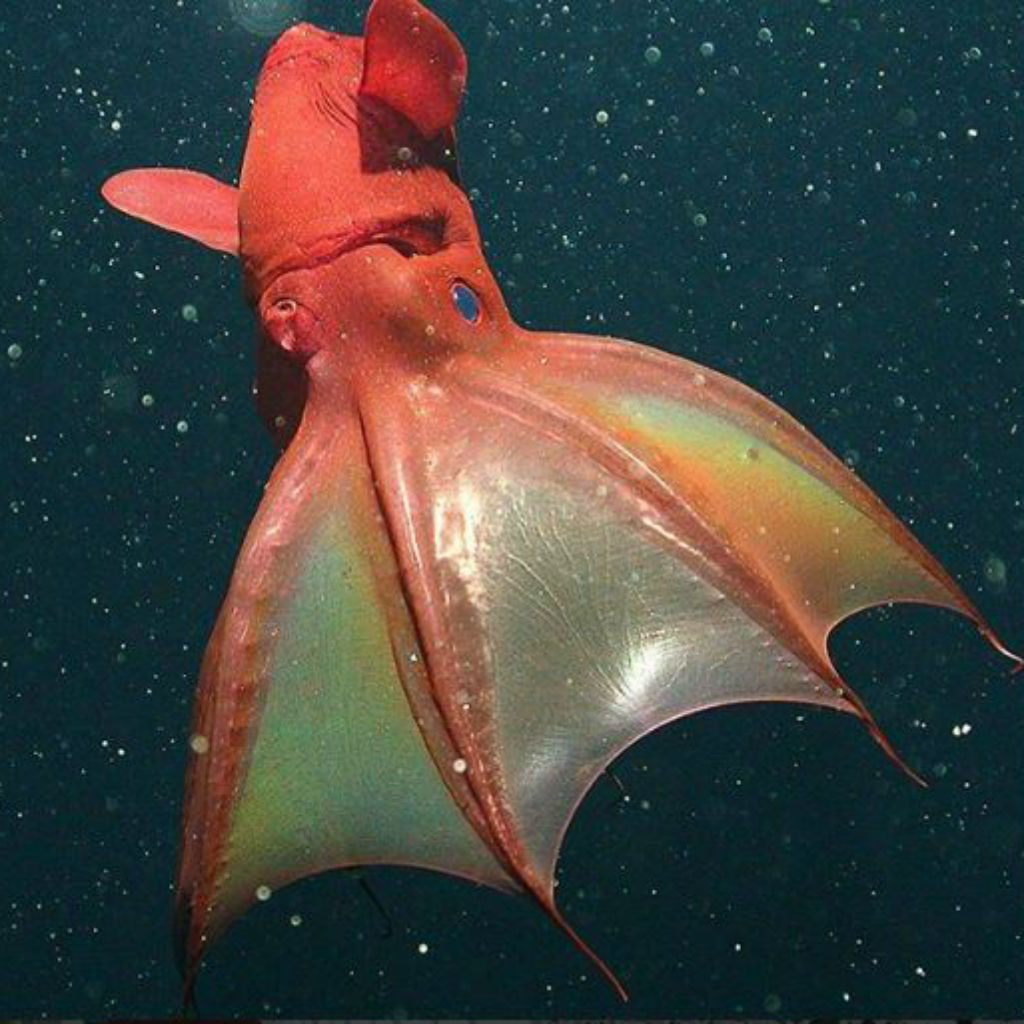 The vampire squid lives at ocean depths of 2,000 to 3,000 feet. It got its name from its webbing, which it can turn inside out and cover itself with it, like a vampire's black cloak, when it needs to hide. Its webbing is also covered with fleshy spines. And if the vampire squid gets agitated enough, it will shoot blue bioluminescent mucus out of its arm tips to daze predators so it can swim away into darkness. And if you think that's nuts, check out the 30 Craziest Facts About Planet Earth You Never Knew. The anglerfish looks like pure nightmare fuel, but you probably shouldn't worry about encountering one that looks like this: they only live in the deep sea. They're also pretty lazy hunters; anglerfish don't chase prey, but rather dangle a fleshy growth on their head in front of their mouth to lure in their meals. In addition to being a strange-looking creature, the red handfish also has a weird way of getting around. Instead of swimming, it uses its hand-like fins to walk along the ocean floor. It is thought to be one of the rarest fish in the world; in fact, until this year, there were thought to be between 20 and 40 of them living in the entire world. With just one look, it's pretty obvious how the terrible claw lobster got its name. This creature was only discovered in 2007, 850 feet below the surface off the coast of the Philippines. It's certainly creepy looking, but you don't have to worry about finding yourself caught in its claws. In addition to being completely blind, it's also only an inch long (minus the terrible claws). 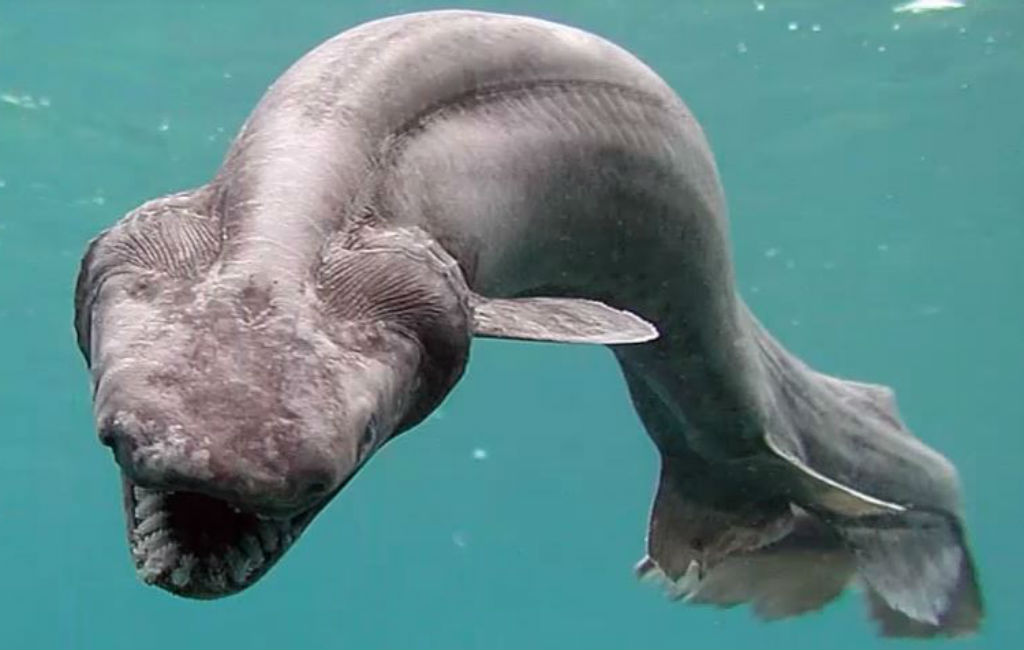 The frilled shark, an inhabitant of the Atlantic and Pacific Oceans with a shark-like head and somewhat snake-like body, probably doesn't live deep enough in the ocean for most beach-goers' liking. In fact, frilled sharks are frequently spotted in water as shallow as 160 feet deep. It's frequently described as a "living fossil," with the oldest frill shark fossil remnants dating back to the early Pleistocene, more than 2.5 million years ago. 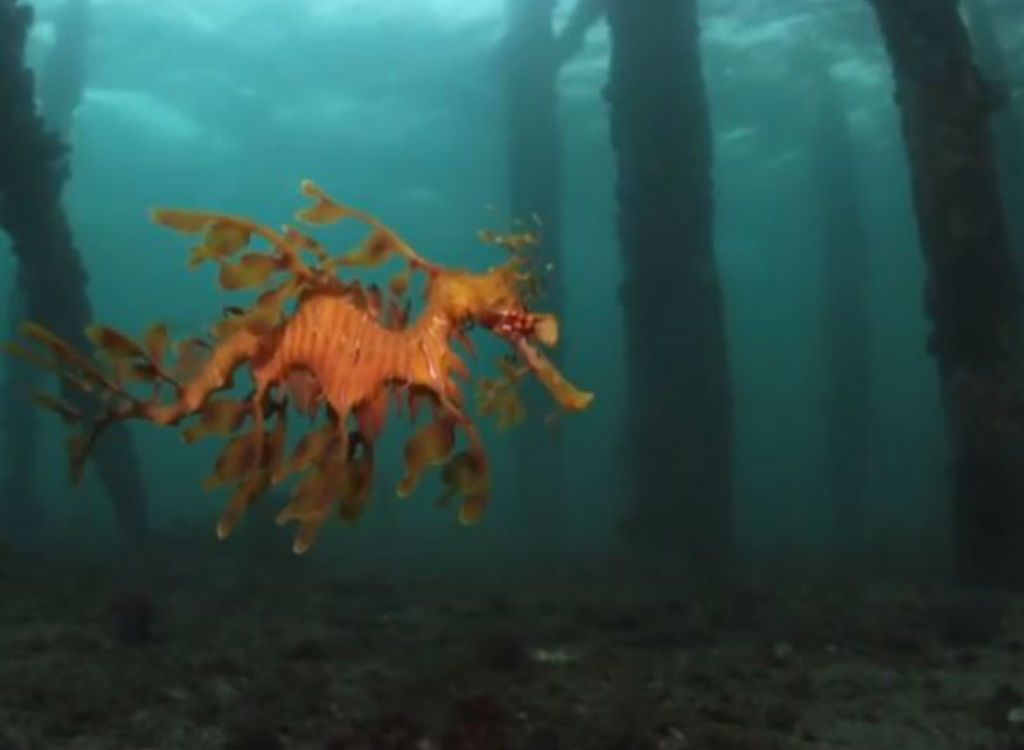 This might look like a drifting piece of kelp, but it's actually a leafy seadragon, which is found off the southern and western coasts of Australia. They're nicknamed "leafies" and are the marine emblem of South Australia. And while their cool-looking fins may seem like a means of propelling the seadragon through the water, they're actually only used as a means of camouflage. 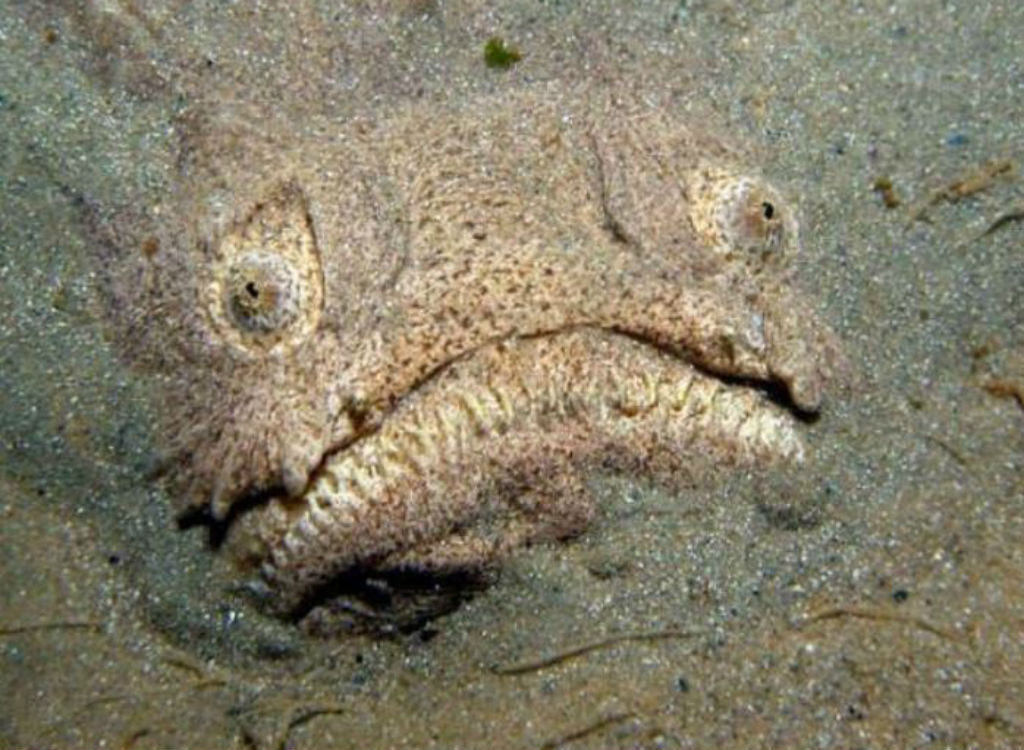 The northern stargazer has its eyes, nostrils, and mouth all on top of its head, so it can bury itself completely in the sand to hunt. Hidden like this, when prey swims by, the stargazer can pop up and grab it quickly. 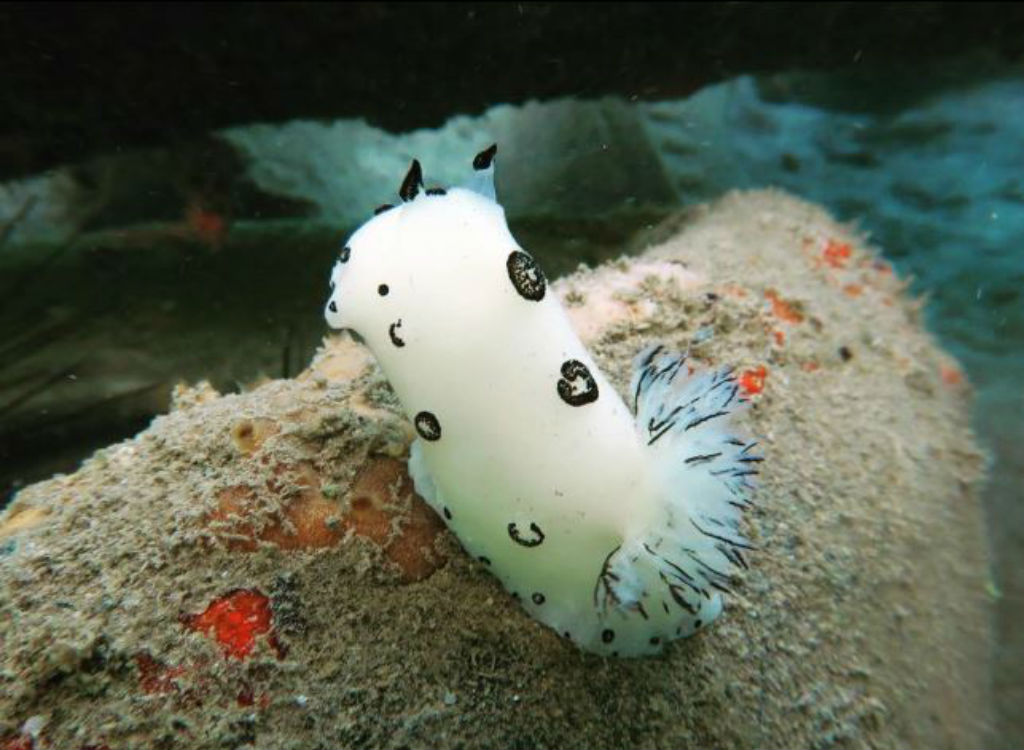 The nudibranch are a group of over 3,000 sea slug-like creatures that are known for their colorful appearances. This particularly festive-looking variety is a polka dot nudibranch, which can grow to be up to a little over two inches long. However, those spots aren't as fuzzy as they look—they're actually made up of firm bristles. 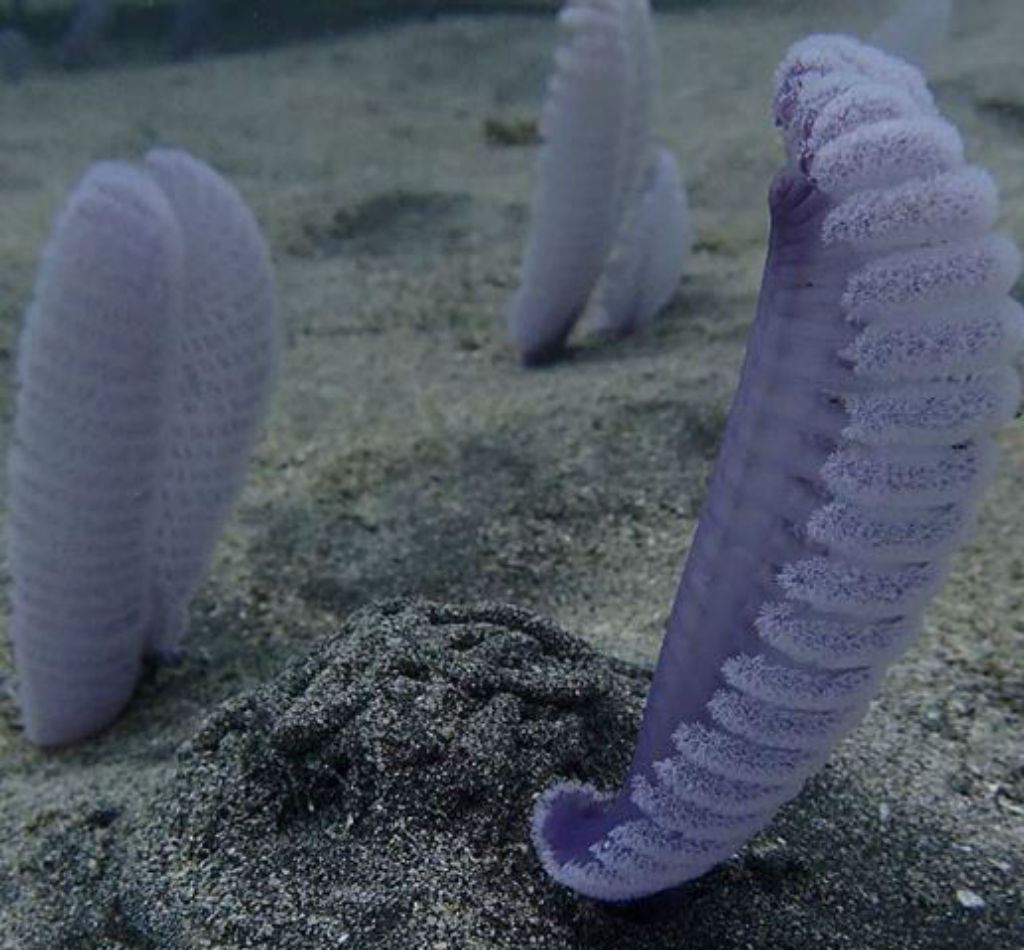 A sea pen is a colonial animal made of many polyps. One polyp grows and becomes the base, and the other polyps develop out of this main polyp. So, how did they get their unique name? The sea pen's shape bears passing resemblance to a quill pen. This toothy fellow, the triggerfish, lives in tropical and subtropical waters throughout the world. From the side, triggerfish may be pretty cute, thanks to their bright colors, but head on, their human-like teeth make their appearance significantly less friendly. 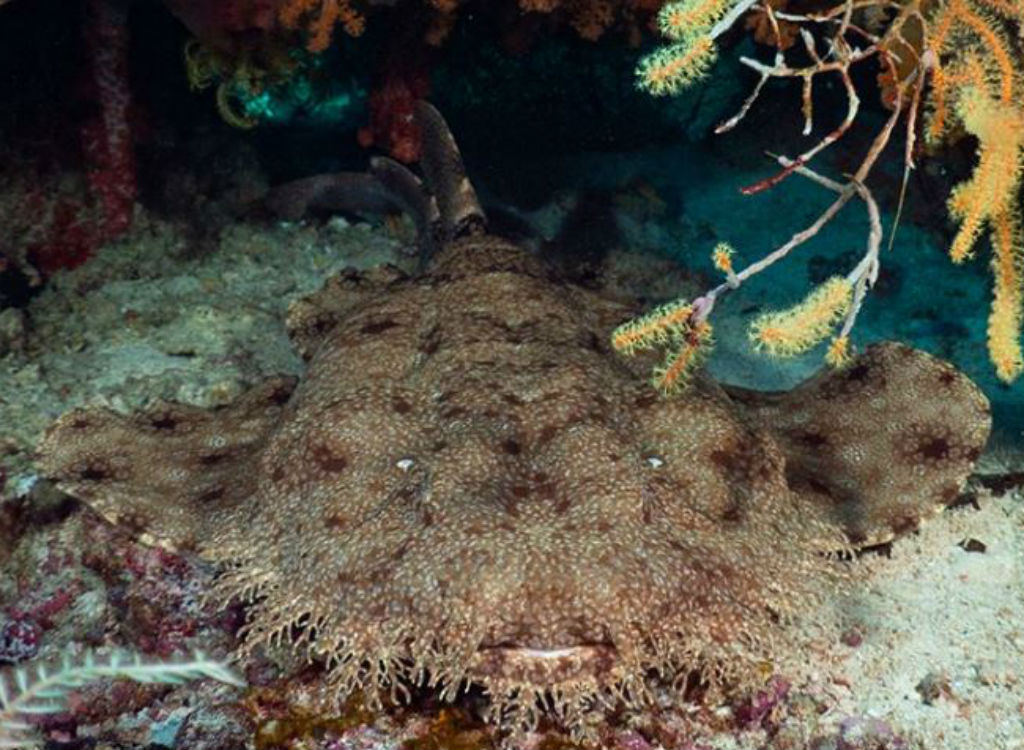 The tasseled wobbegong is a kind of carpet shark that lives in the coral reefs off of Australia and New Guinea. It lays on the ocean floor, resting until it can ambush nearby prey for dinner. Viperfish live in depths of 250 to 5,000 feet during the day, but at night they come to shallower waters. Those beautifully bright parts of its body? Those are photophores, light-producing organs used to lure prey. Viperfish are actually capable of remaining completely motionless for hours waiting for unsuspecting prey to swim by. They can live up to 40 years in the wild. 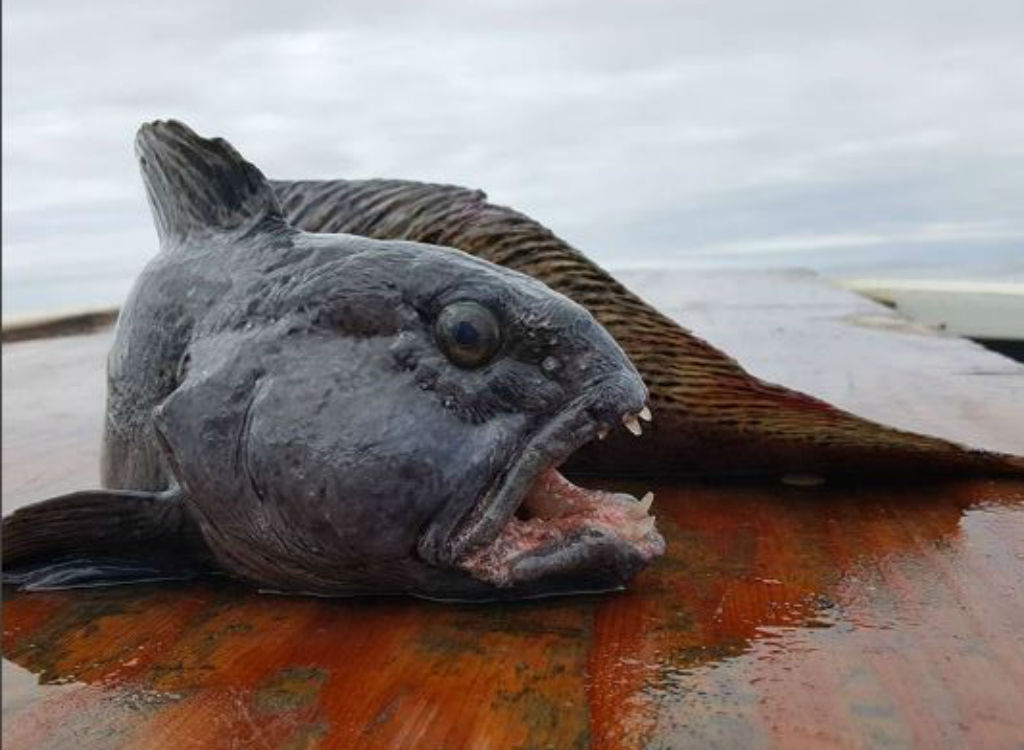 Wolffish live in the cold waters of the northern Atlantic and Pacific oceans. They eat hard-shelled animals, like clams, and use their canines and molars to crush their prey. In addition to having molars capable of crushing a clam, wolffish can also grow up to six feet long. The little dumbo octopus is so named because its two big fins are reminiscent of Dumbo's floppy ears, which they flap to swim around. Unfortunately, for those hoping to see one of these adorable little guys in the wild, they live at depths below 9,000 feet, so you wouldn't spot one even if you're a record-breaking scuba diver. But to find out where you can see other fascinating aquatic life, discover The Most Unique Dive Sites on Earth.