30 Surprising Ways Your Cat Communicates With You

Listen up, cat owners—your feline friend is trying to tell you something.

Whether your team cat or team dog, we can all agree that cats are the less-understood of the two pets. In fact, according to a study conducted by the Swedish University of Agricultural Studies, it takes cats longer to trust their owners—but when they do, they make sure you know just how much you mean to them.

However, unlike dogs, cats are more calculated with their affection, meaning that in order to decode their every move, you must be paying attention. So, if you're ready to feel in-tune with your feline friend, read up on these surprising ways your cat is trying to communicate with you. And for more on being the best cat owner, be sure to know the Best Way to Keep Your Cat Healthy. 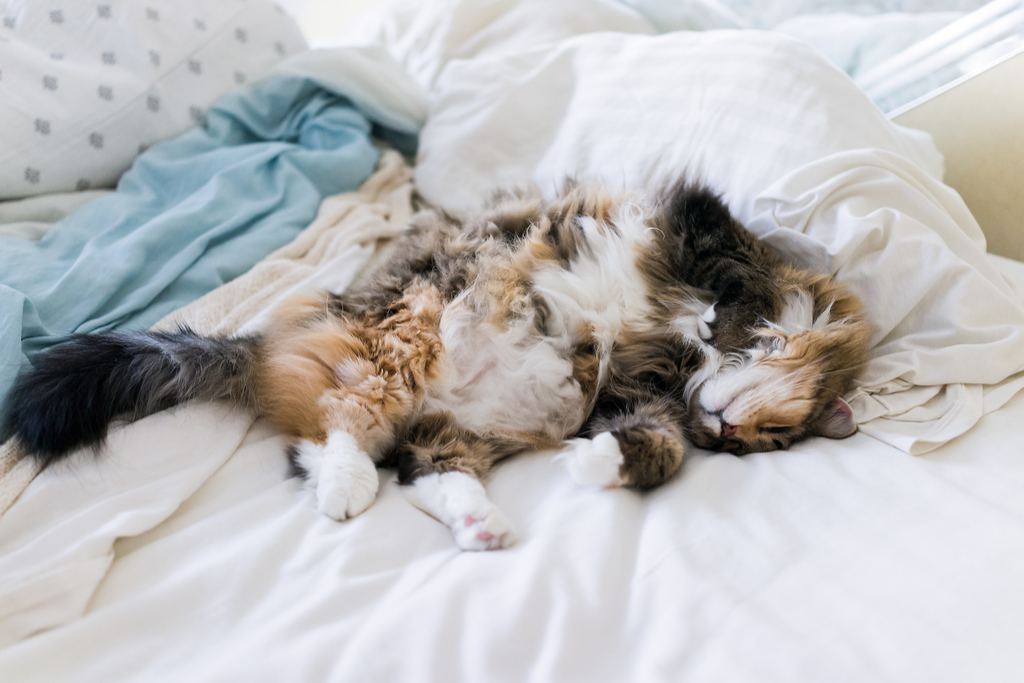 There are few more photogenic cat poses that exist. But, as it turns out, your cat's stretched and exposed tummy may not exactly indicate that they feel happy or trusting.

According to Pam Johnson-Bennett, a certified animal behavior consultant, there's a reason why your cat may attack your hand as it makes its way to their belly—they're in defense mode. If this exposed tummy is paired with fully extended teeth and sharp claws, it may be a good idea to give your cat some space. And for more ways to be the best cat owner, check out these 25 Hidden Ways Your Cat Shows Affection.

2
Back arched, fur on end 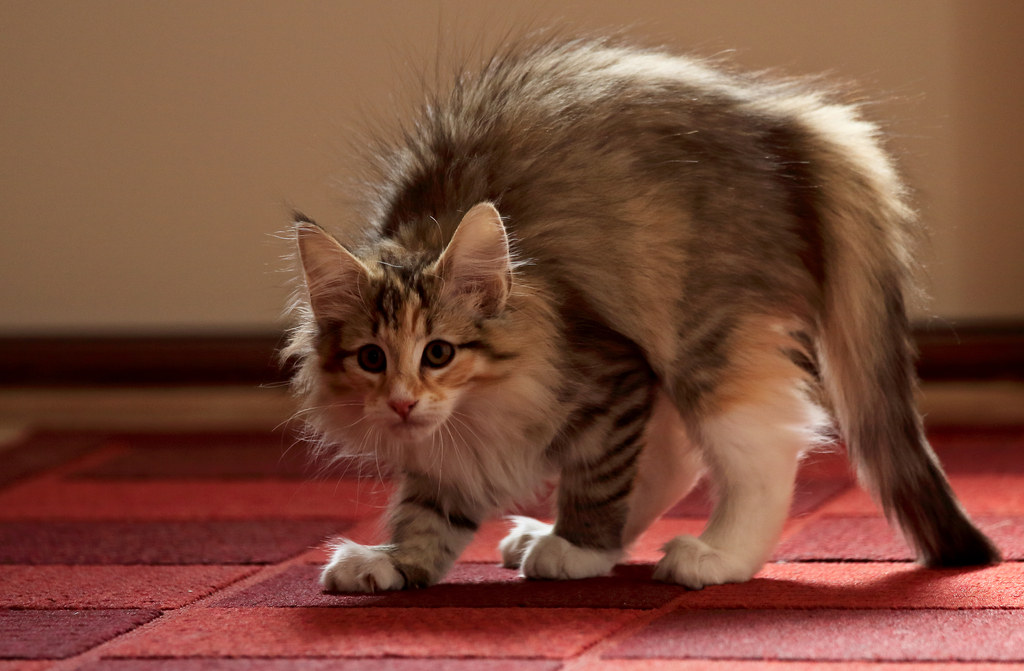 Otherwise known as the classic Halloween pose, your cat is incredibly agitated if they assume this position. This stance, according to Karen Sueda, Diplomate of the American College of Veterinary Behaviorists, indicates that you should immediately back off. 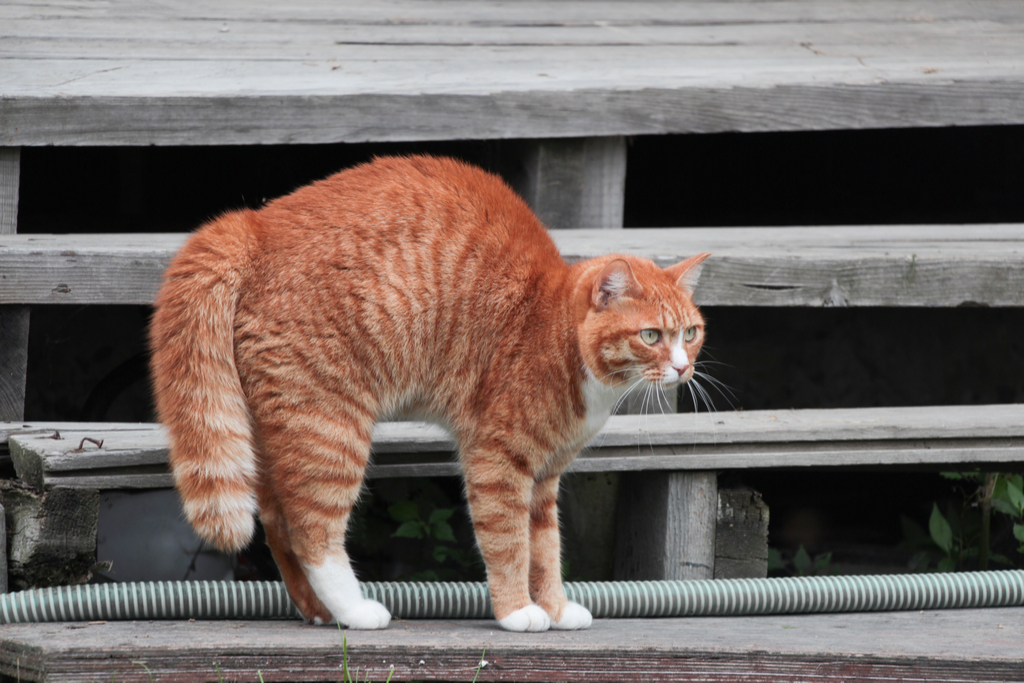 However, if your cat's back is arched but their fur remains flat, that might just mean that they're stretching—and take this move as a compliment, as it shows that your cat fully trusts you enough to be vulnerable around you. And for more reasons to love your feline, check out these 20 Ways Cats Are Better Than Dogs. The way your cat's tail is positioned can tell you a lot about their current mood, says Sueda. For example, if your cat's tail is straight up but not completely rigid, that means that they're feeling extra confident. When the tail is curled around its owner or another cat, it's a sign of trust and affection. But if the cat's tail lingers between its legs, that might mean that they feel scared or threatened. 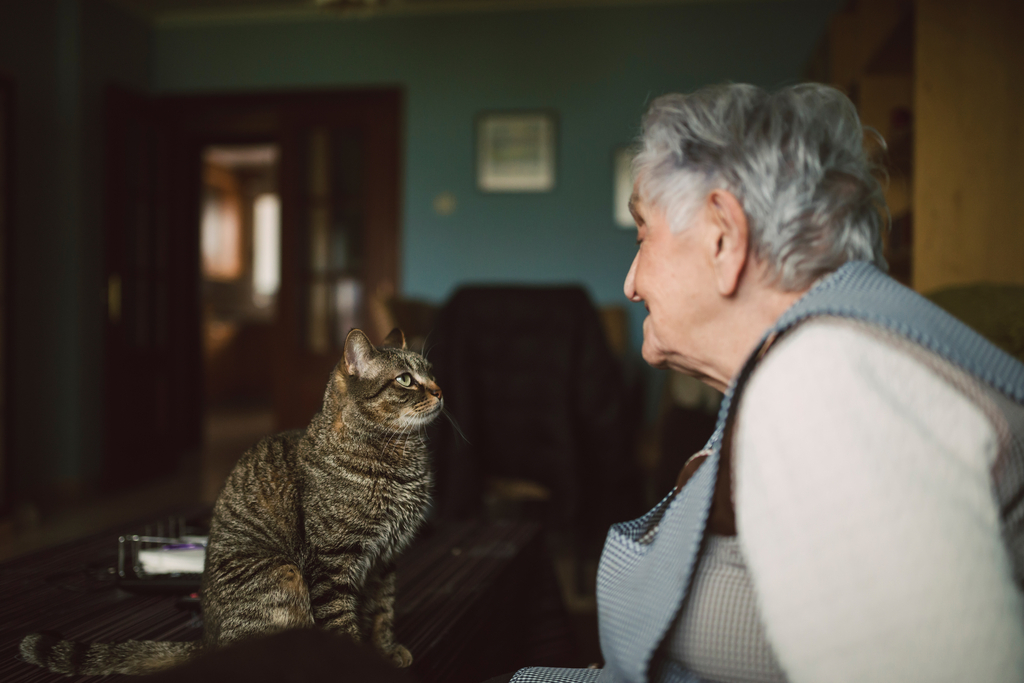 While humans use direct eye contact to convey affection and warmth, cats often feel threatened by these intense stares. So you've earned a cat's affection when they maintain eye contact with you by using slow, languid blinks. According to Johnson-Bennett, this display means that cat is fully at home with you. And for more adorable cats, check out these 30 Cutest Celebrity Cats. 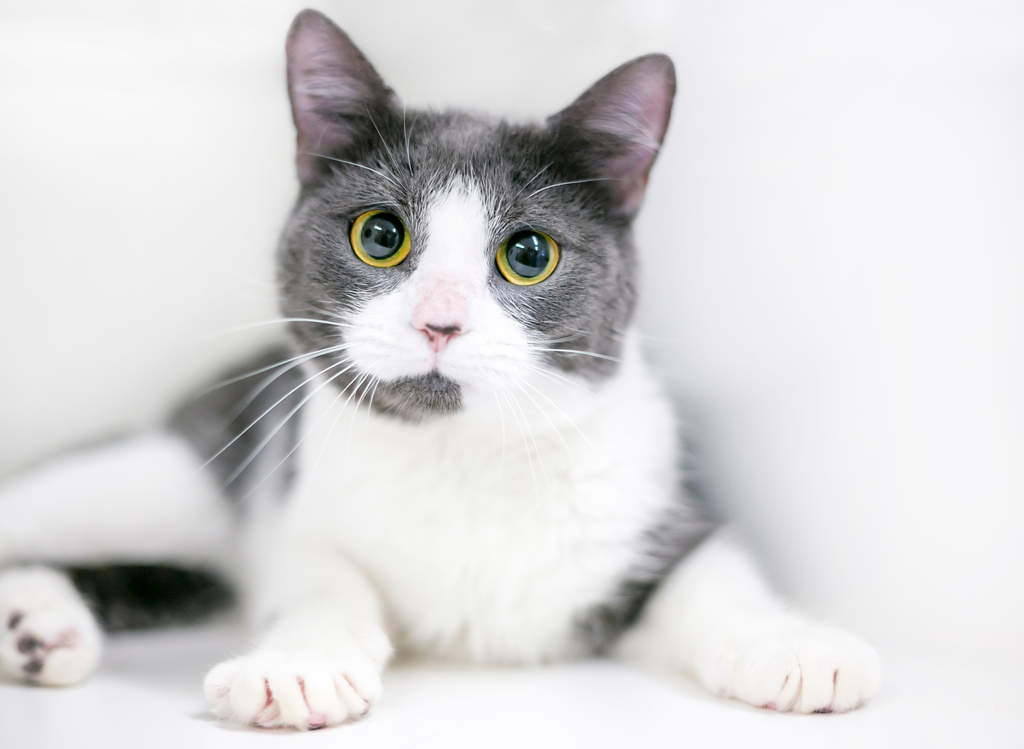 On the other hand, if you notice that your kitty's pupils are expanded, that's a clear sign that they are frightened and preparing for an attack. The expansion of the pupils, according to Myrna Milani, an animal behaviorist at Tipping Point Animal Behavior Consulting Services, allows the pupils to take in much more visual information.

When the pupils constrict or narrow, it means that your cat is very angry about something. This constriction allows the cat to see finer details, says Sueda. So, if you're playing with your cat and notice these defensive features begin to take shape, it may be time to put away the catnip. 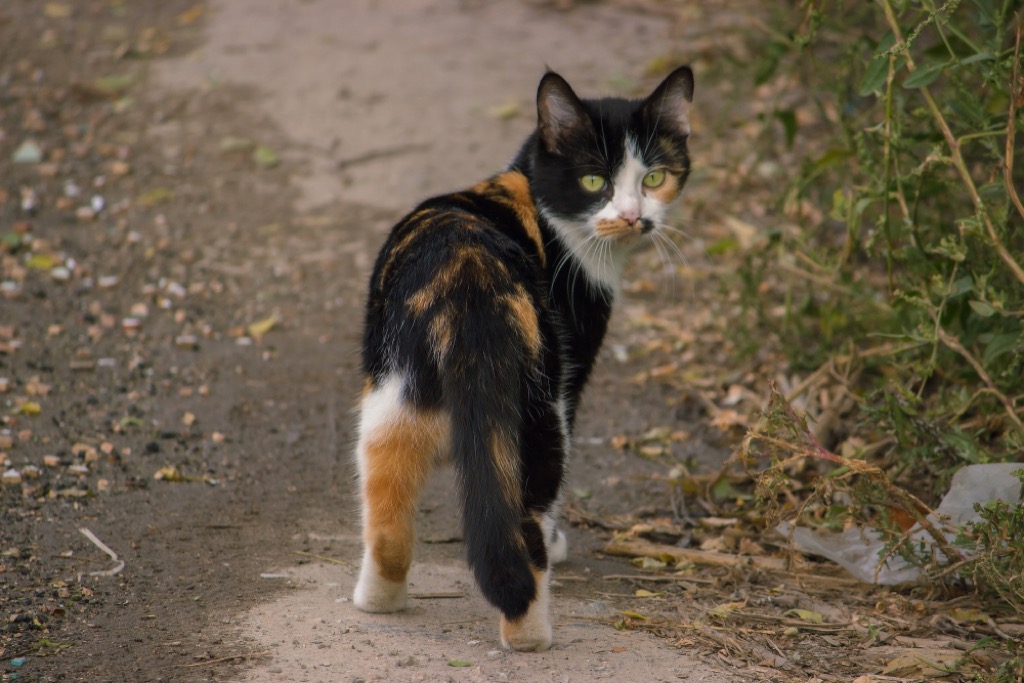 In short, a low twitching tail is a warning signal—either your cat is getting ready to pounce or they're up to some other mischievous act. Normally, according to Milani, this tail signal means that they are ready to pounce on their prey—and if your hand happens to be that prey, it's best to just freeze. After a while, your feline friend will settle down. 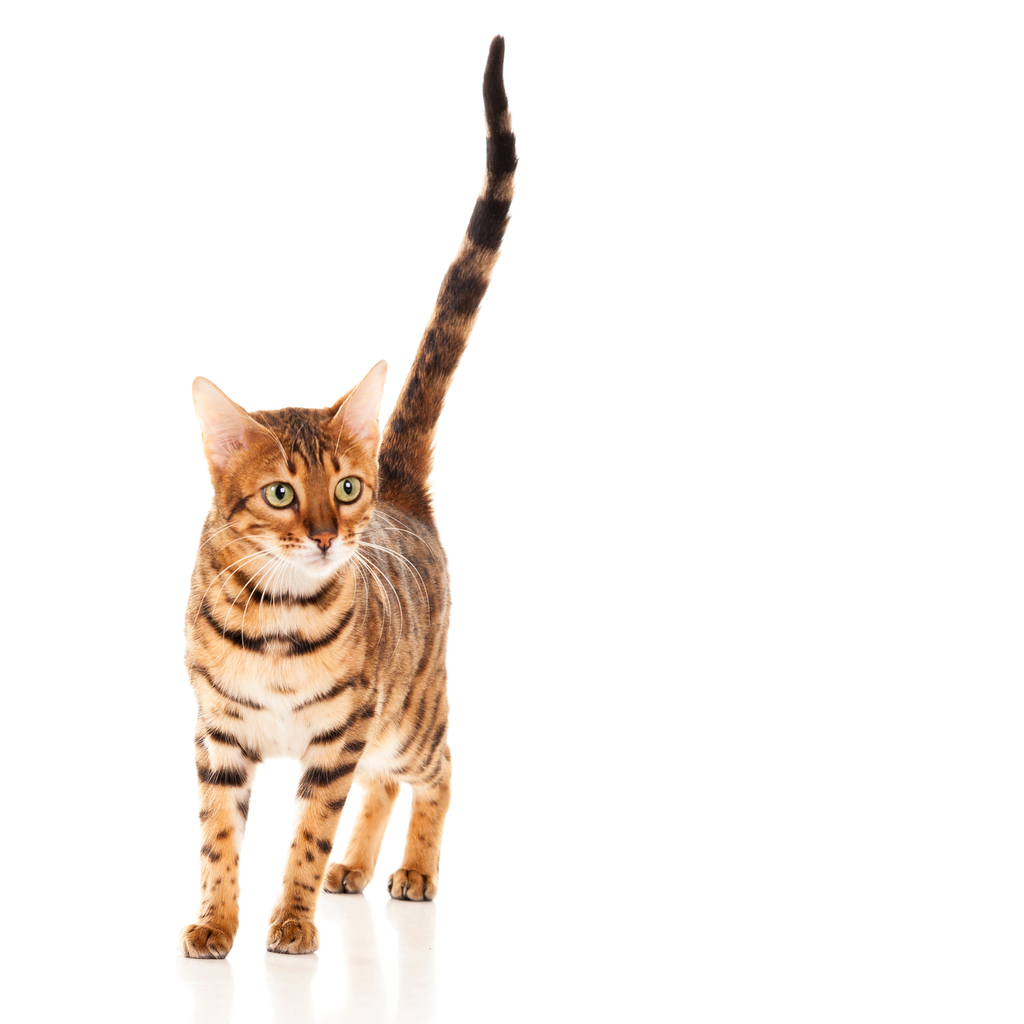 If your cat's tail is straight up but quivering slightly, it's either a sign that their happy and at peace, or that they're about to spray something (if they aren't neutered), according to the Humane Society of the United States. Like you might have already guessed, your cat's purrs are normally a sign of complete contentment. According to the Humane Society, a purr can even be elicited by your cat to comfort itself when it's sick or anxious.

The adorable little chirps your feline makes are used primarily to get your attention. They are instructing you to follow them—normally to their food bowl or to show off their latest predatory conquest. This sound is also used by mothers to communicate with their kittens, and if you have more than one cat, according to the Humane Society, they will use these sounds to speak to one another. 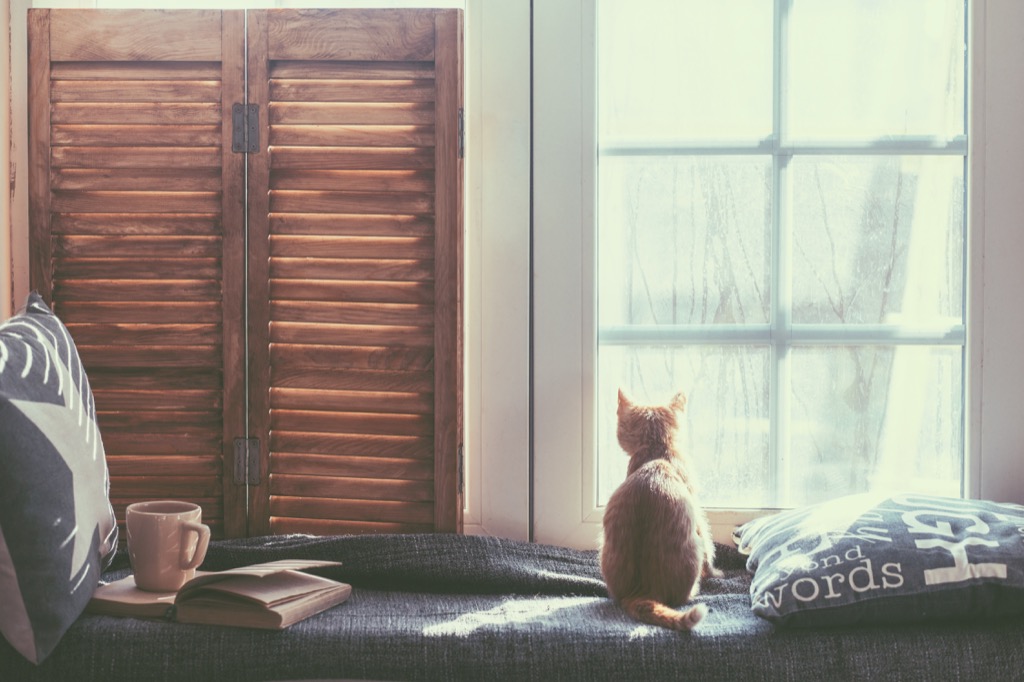 A slightly louder chattering noise can be heard by your cat while they're ogling birds and other small rodents from the window. According to the Humane Society, this sound might be an exaggeration of the "killing bite," when a cat chomps down on its prey, snapping its neck. At the end of the day, this is a perfect example of the ingrained predatory nature of your feline. 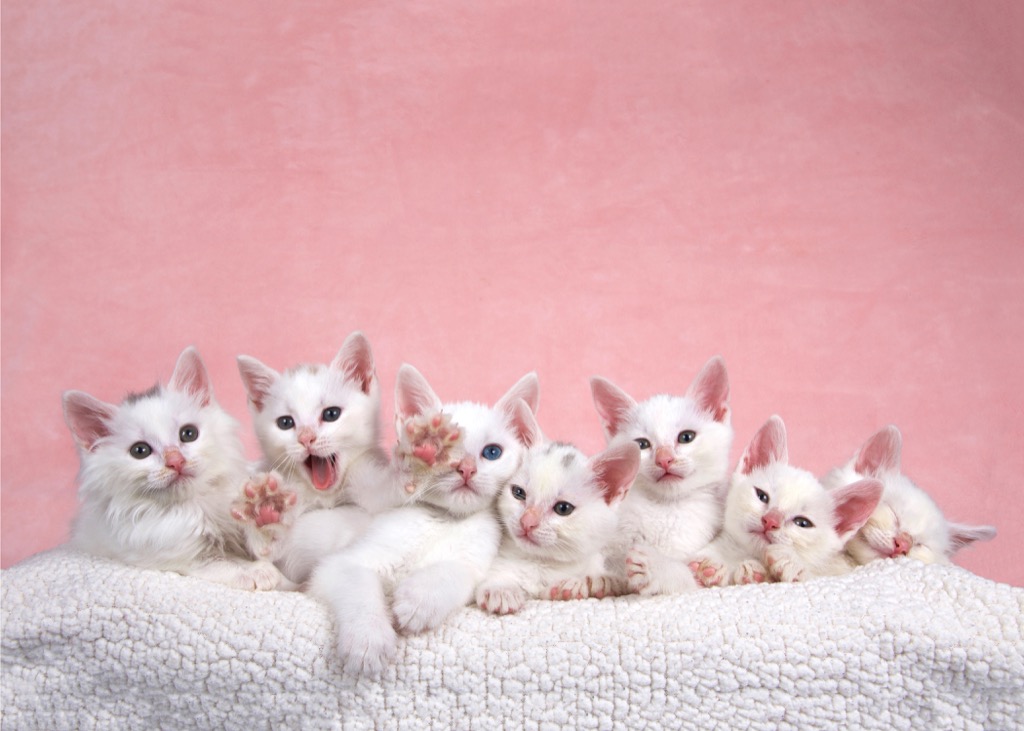 If you adopted an older cat, you may have never witnessed this sound, as most cats completely stop using this sound after 4 to 5 months of age. The Humane Society states that kittens use this sweet, soft sound to communicate with their mothers.

According to Milani, there are distinct lines of communication between yourself and your cat—meaning that they are nearly always trying to tell you something.

Your cat's high-pitched gurgling or chatting noises mean your cat is attempting to have a friendly chat with you—so listen up. In fact, similar to your human friends, they want to see how you're doing and convey what they've been up to, as well.

Growling or hissing is another sure sign to steer clear of your feline. These sounds mean that they are agitated and not in the mood for your pets at the moment, says Milani. 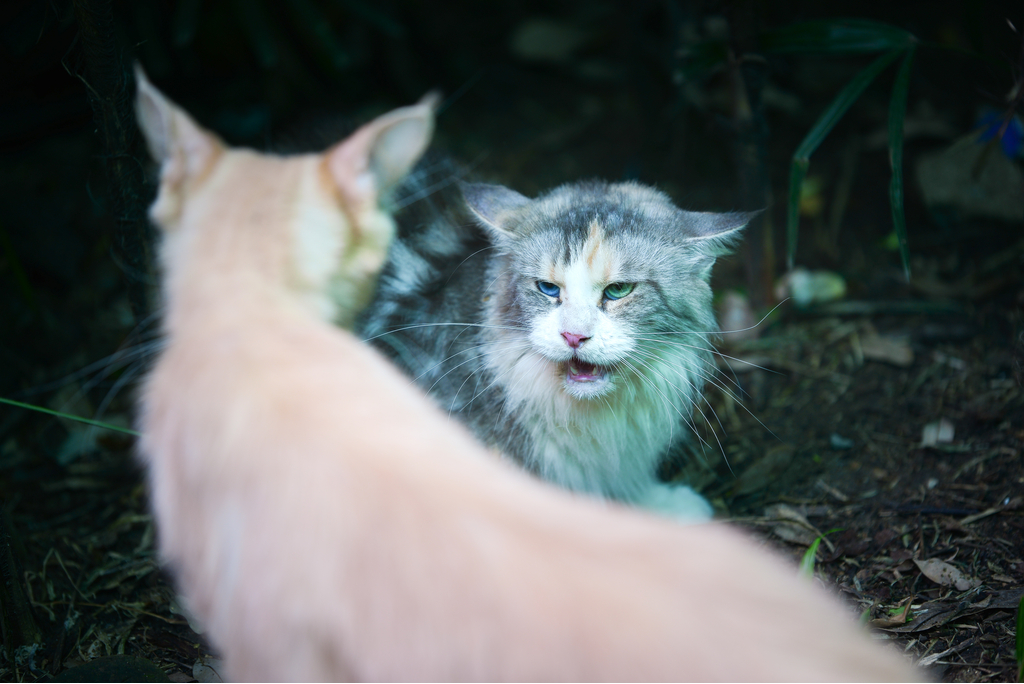 Caterwauling is the loud, guttural sounds that cats make when they feel threatened by other felines. In other instances, says Milani, male cats may make these sounds if they haven't been neutered. Additionally, deaf cats very commonly make this sound.

17
Rubbing up against your legs 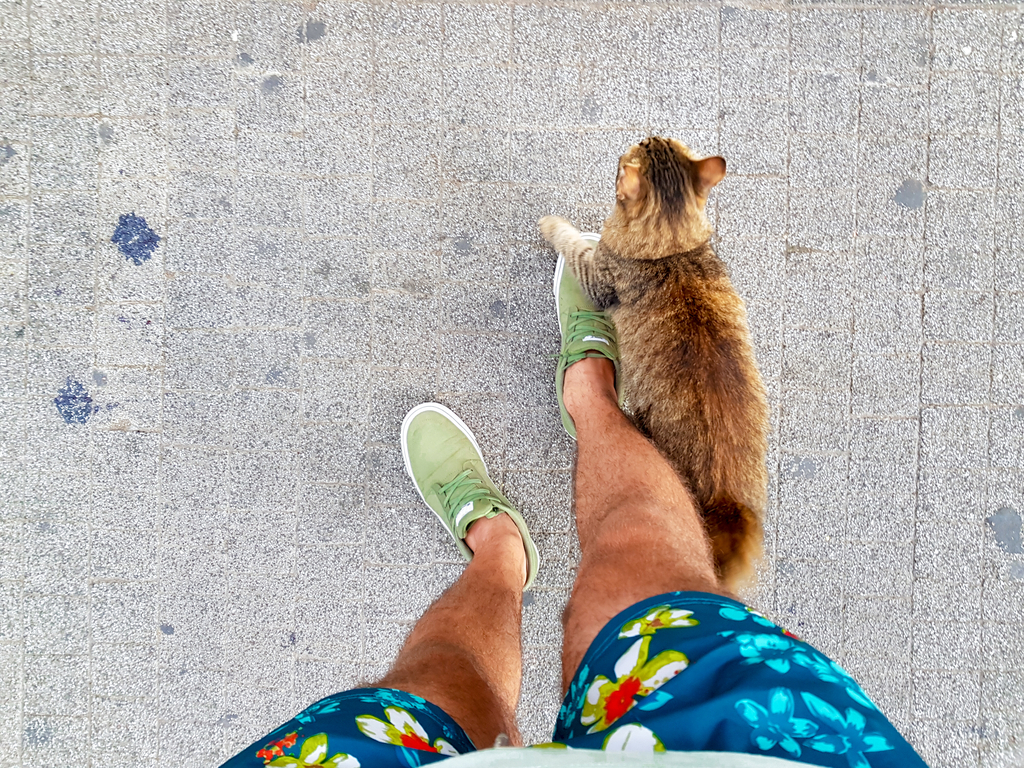 Contrary to popular belief, your cat doesn't just want food out of you when it rubs against your legs. Actually, your feline friend is probably just greeting you after a long day, says Sharon Crowell-Davis, a professor of veterinary behavior at the University of Georgia.

This is especially the case when you step into the door after work and you find your cat rubbing up against your legs, with their tail grazing your thighs—they're just trying to communicate how much they've missed you!

18
Rubbing its chin against you 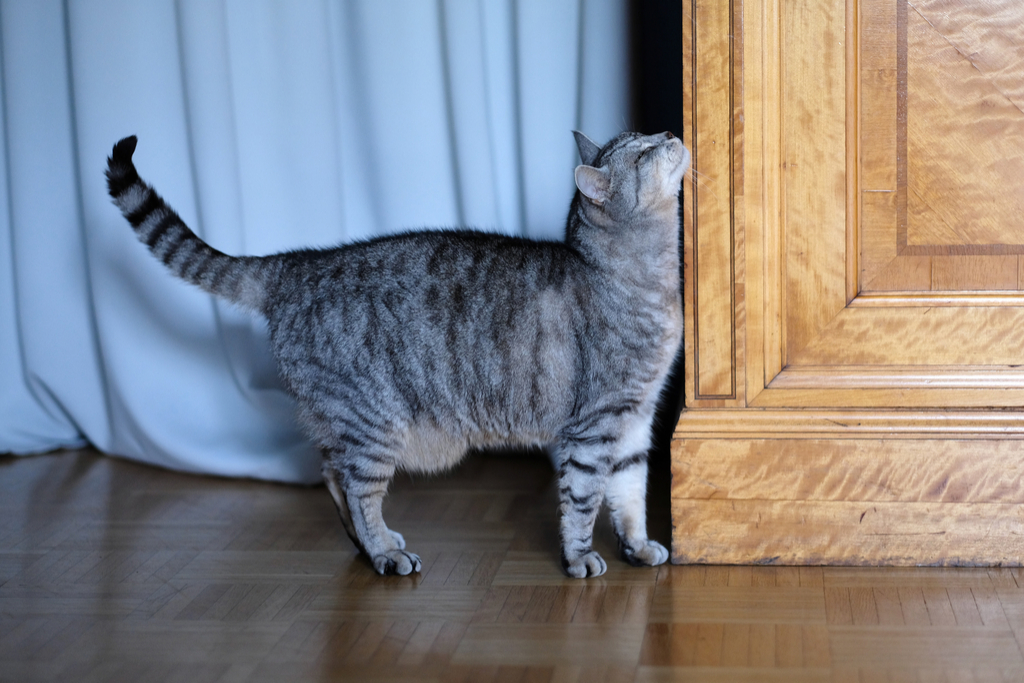 Yes, your cat has facial expressions—and yes, they can mean many different things, just like us. According to Cromwell-Davis, if the cat's facial muscles are tensed, that means that they are stressed, while a relaxed means that your cat is feeling…relaxed.

If your feline's ears are turned all the way forward, that means that they are relaxed or content, says the Humane Society. Forward ears can also mean that they are interested in whatever events happen to be taking place around them.

Again, according to the Humane Society, this means that your cat is in a trusting and content mood. 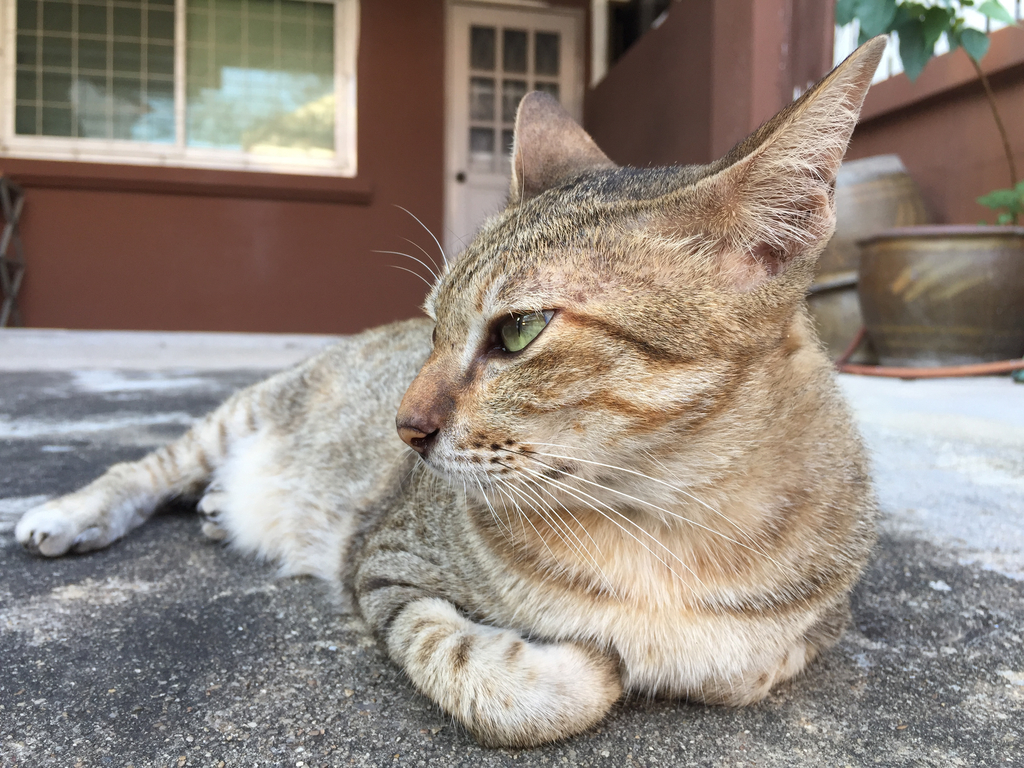 When your cat's ears are turned back, but not fully against their head, this signals that they are listening intently to every sound—in other words, they are on the alert, says the Humane Society. 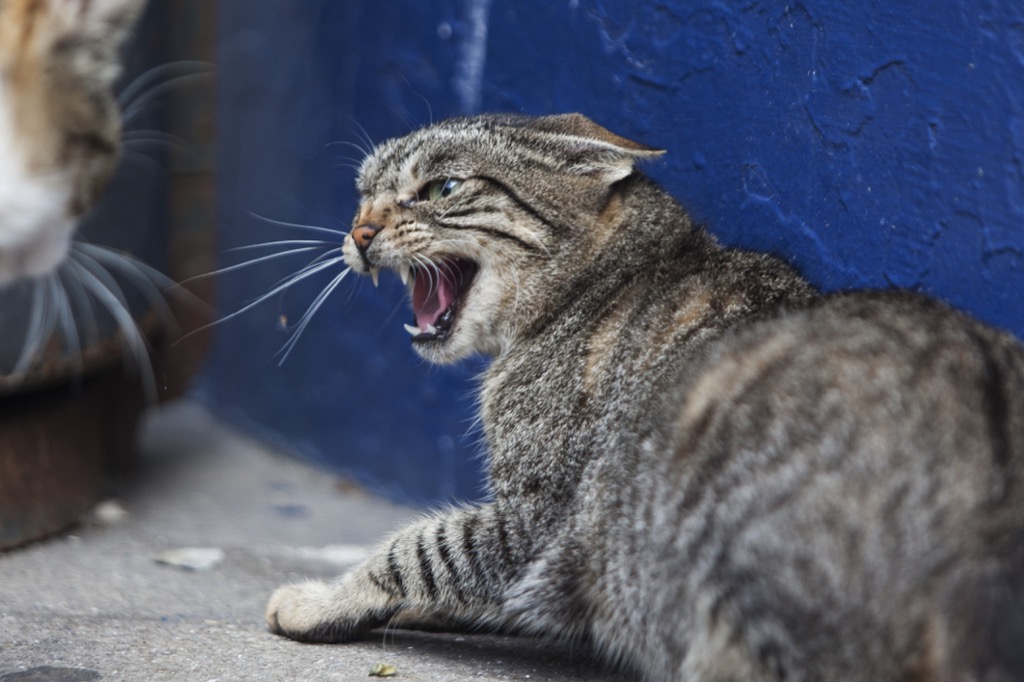 If your cat hears something alarming or begins to feel like they might be in danger, their ears will mostly rotate all the way back and rest against their head. When this happens, according to the Humane Society, steer clear of your cat, as they may be in attack mode.

Most likely, you've witnessed your cat digging its paws (and sometimes claws) into soft surfaces. While, yes, this can be very annoying, there's an adorable reason for this habit.

According to the Humane Society, your cat makes this motion (also called "making biscuits") because they are incredibly happy. This habit is first acquired by nursing kittens when they would massage their mother's teats to make milk flow.

The Flehman response happens when your cat tilts up its head and inhales through its mouth in order to smell more effectively. In fact, a sense of smell is so important to the cat that they have a whole other organ, called the Jacobson's organ, located on the roof of their mouth behind their front teeth, says the Humane Society.

When cats lick or groom each other, they are relaying trust and affection. If your cat is doing this to you or any other human, says the Humane Society, they are relaying a very deep trust—they are attempting in their own way to nurture and take care of you.

In cats, the act of touching noses can be compared to humans shaking hands—it's a friendly greeting. So when your cat presses its nose against yours, they're just giving you a friendly hello before lounging on your lap.

If your cat gives you a gentle nip, it may be time to play, says the Humane Society. Though, if they start to really chomp into you, it's probably a good idea to retreat. 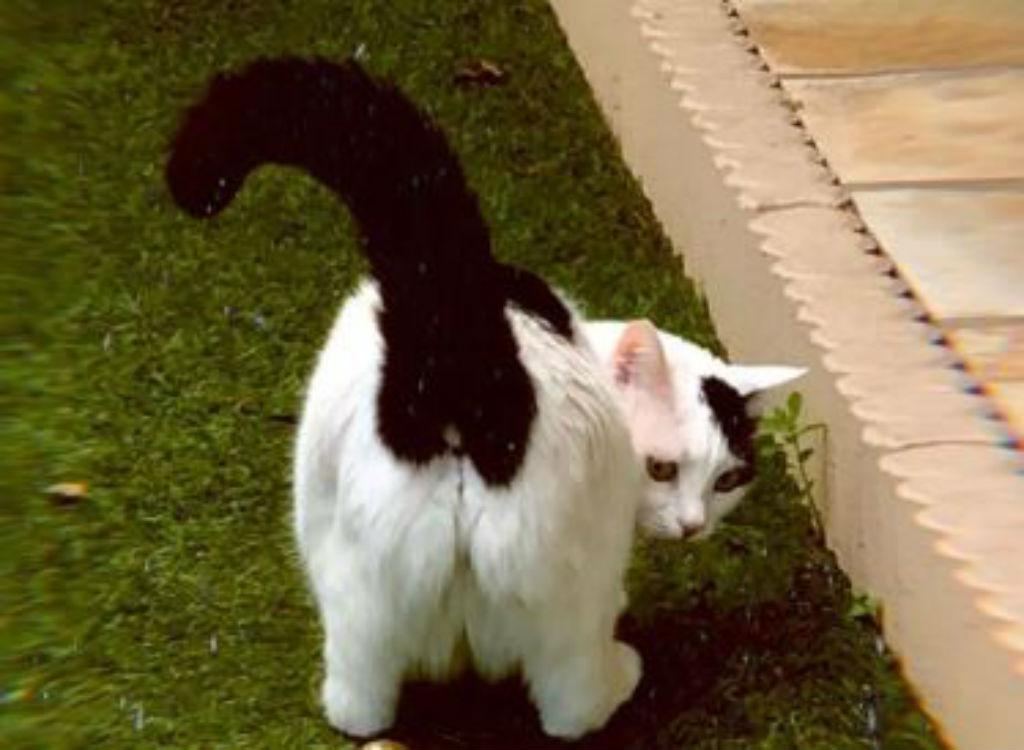 Though your cat may not be able to help this issue if they're suffering from a medical condition, there are a few other culprits that could be behind this annoying habit.

For starters, your cat could be spraying because they feel anxious, according to the Humane Society. This can especially be the case if you've just moved you and your feline friend to a new home—this stress can be too much at times. To combat this newfound stress, some veterinarians can prescribe anti-anxiety medications to your cat. The more likely cause may present itself in male cats who have yet to be neutered—the best way to stop this behavior is to get your cat fixed. 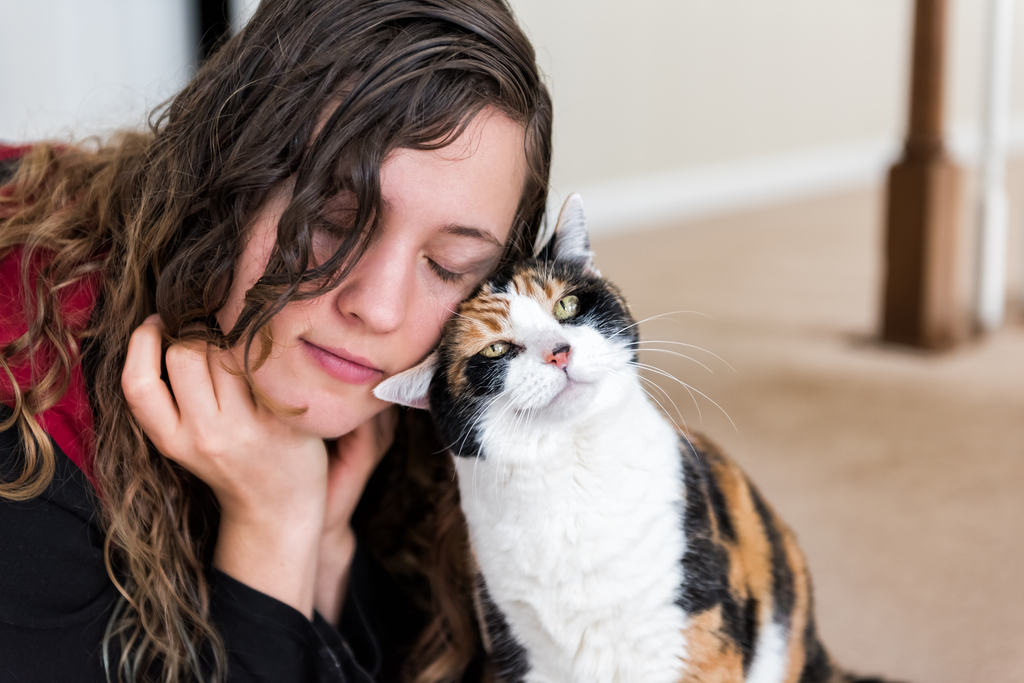 According to the Humane Society, this is your cat's friendly way of saying, "pay attention to me immediately!" And for more about cats, check out these 20 Amazing Facts You Never Knew About Your Cat.