Move over, A-listers: these celebrity cats are the real stars of the show.

When it comes to entertainment, the celebs don't stop giving us the good stuff once they get offscreen. For a particularly feline-friendly group of stars, their off-the-clock hours are spent sharing photos of their adorable cats on social media, much to the delight of animal lovers everywhere. And while all cats are pretty adorable, some are certainly more ready for their close-ups than other. From action stars to A-list singers, we've rounded up the 30 cutest celebrity cats, each a little more aww-inducing than the last. And for more famous furry friends, check out these 20 Celebrities Who Look Like Their Pets. 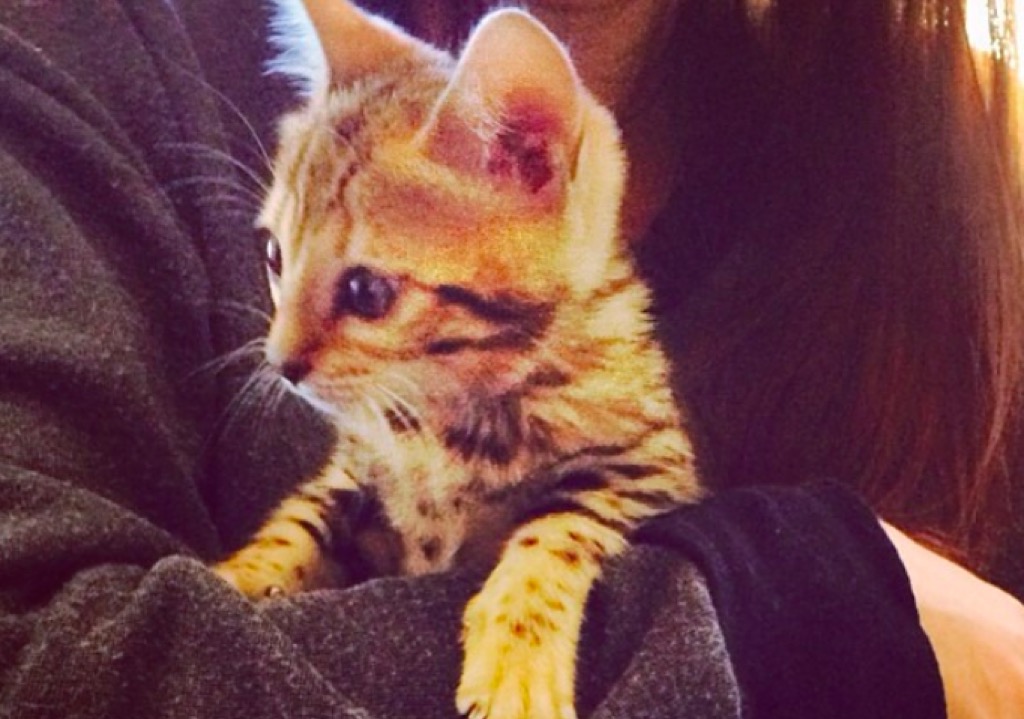 Kourtney Kardashian is a big fan of her cat, Charli, who enjoyed some well-deserved time with the whole Kardashian clan after being adopted. And judging by how often she shows up on her human mom's Instagram, it's clear that this pretty Bengal baby is well-loved. 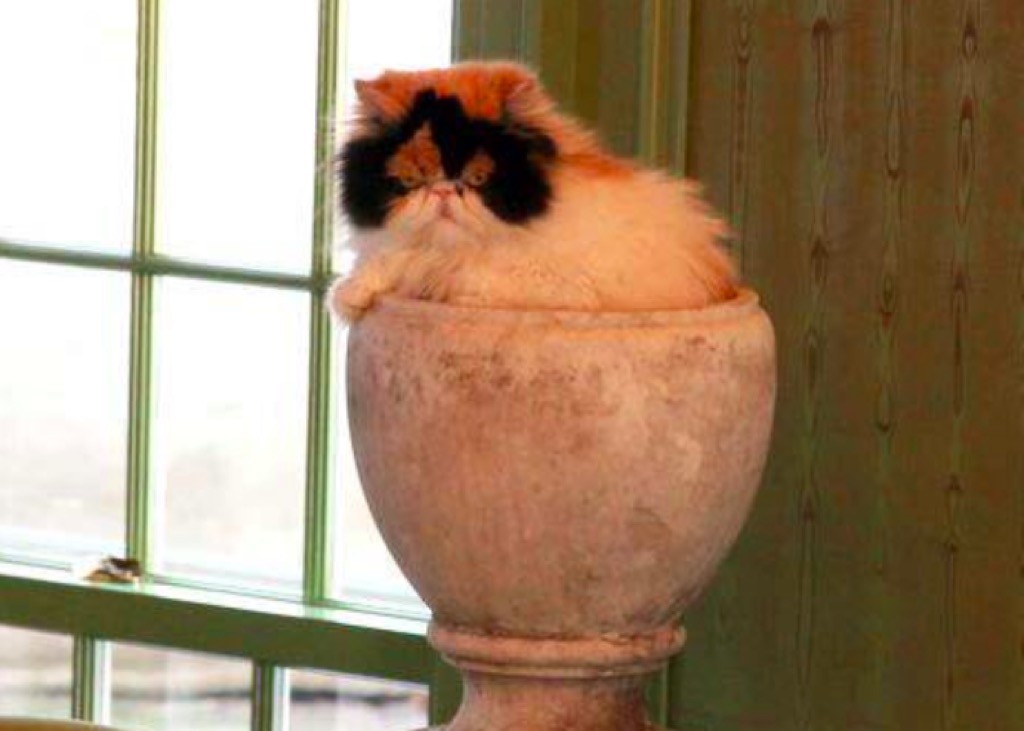 Martha Stewart owns multiple dogs and cats, but when it comes to cuteness, Princess Peony takes the cake. This calico's crowning glory? Her generally sour expression. And if you want to see another side of Martha, check out the 30 Funniest Jokes From Celebrity Roasts. 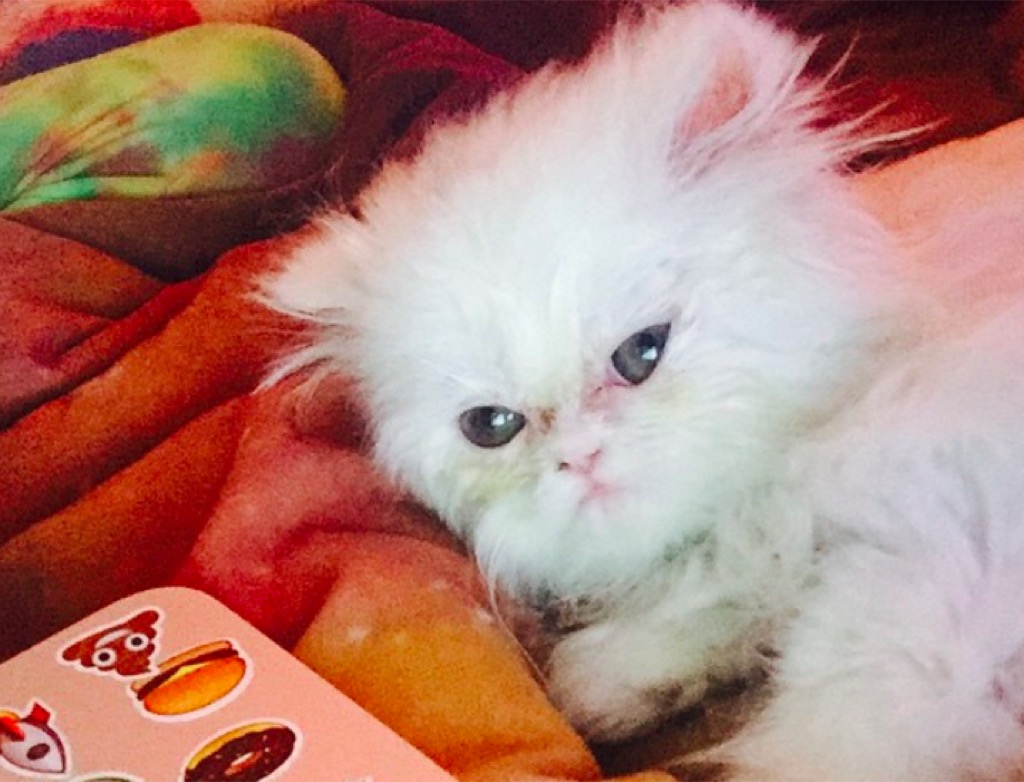 Miley Cyrus is practically running an animal sanctuary, with multiple cats, dogs, and pigs hanging out at her home. But when it comes to cuteness, her fluffy white kitty Shanti Om Bb is undeniably at the top of the heap. 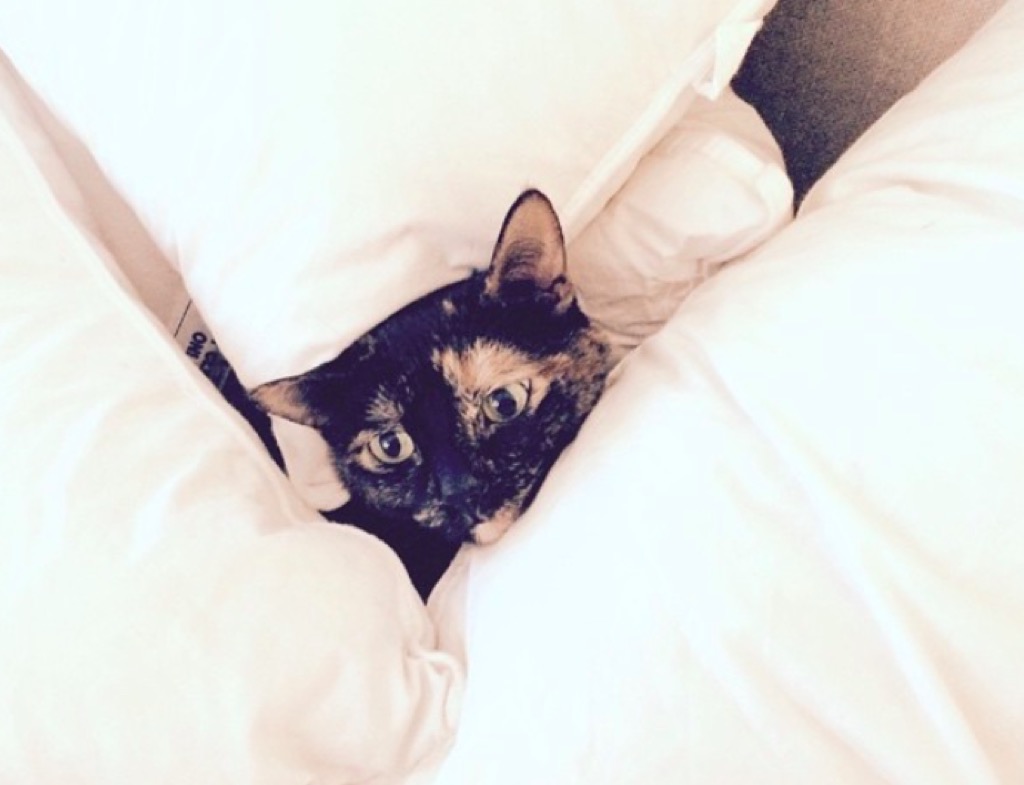 Lea Michele is yet another celeb who just can't stop posting photos of her adorable feline friend, Sheila. Judging by that sweet face, it's not hard to see why. And if you find yourself inexorably drawn to kittens like Sheila, discover Why You're a Dog Person or Cat Person. 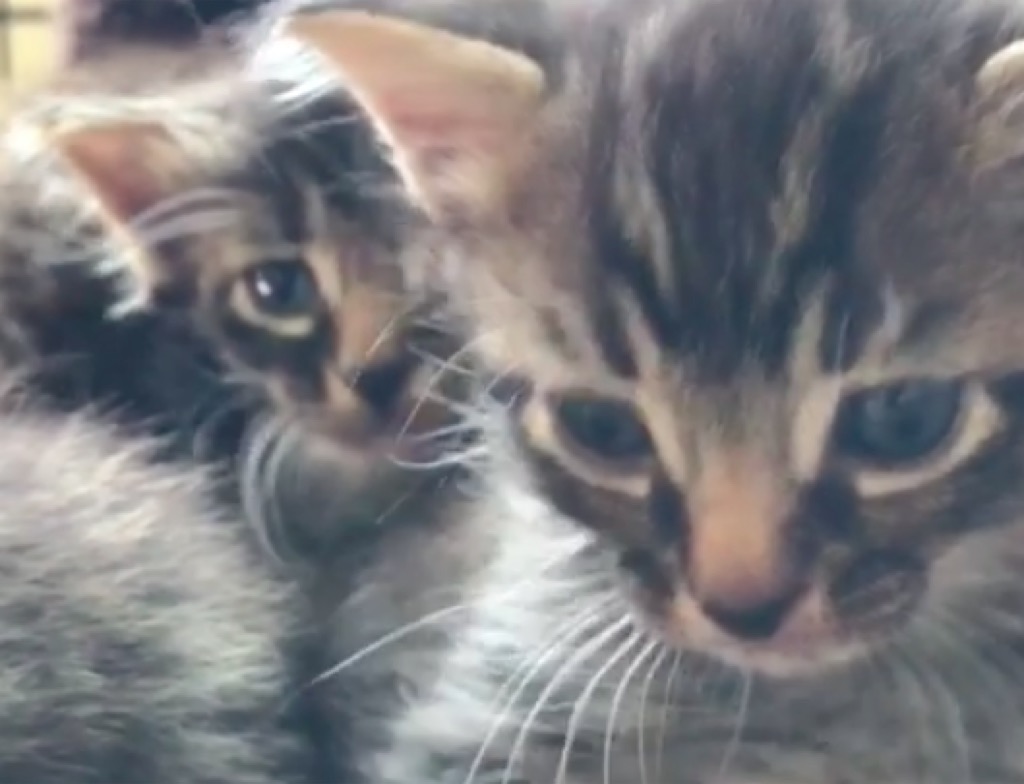 These cute tabby cats aren't long-term pets for Amanda Seyfried, but they are pretty adorable nonetheless. As a serious animal lover, Seyfried is a foster mom for animals waiting to find their forever home. 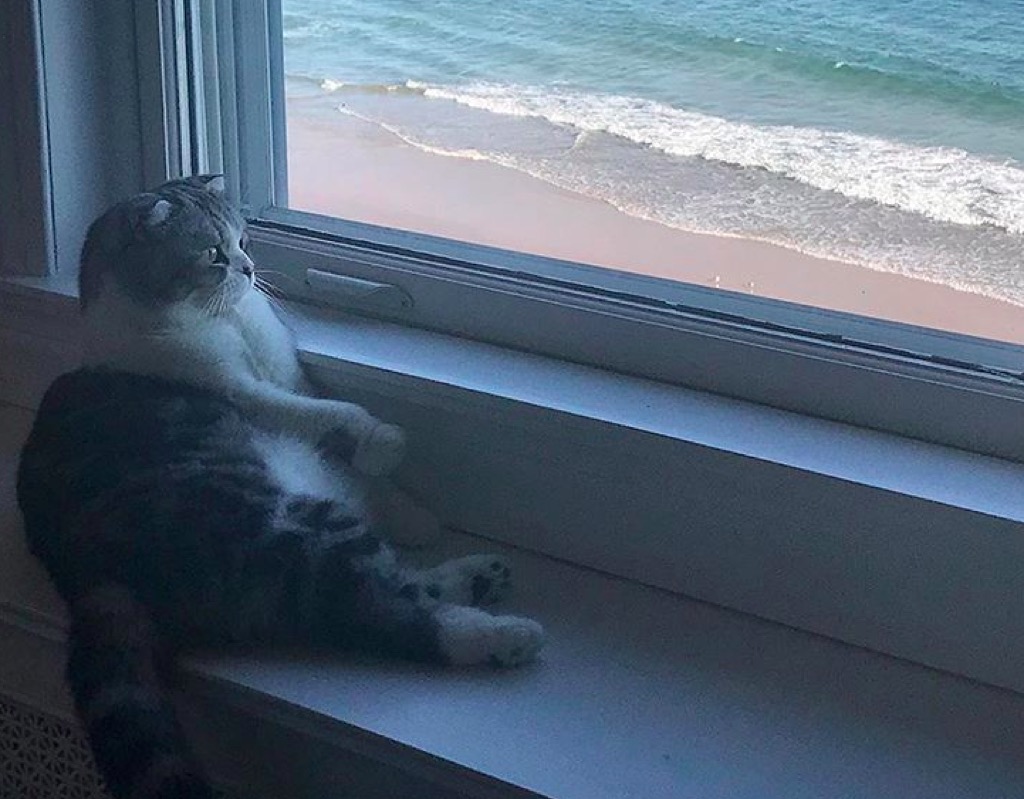 Taylor Swift's cat Meredith Grey is something of a social media star. Of course, it's not hard to see why when you see her striking poses like this. 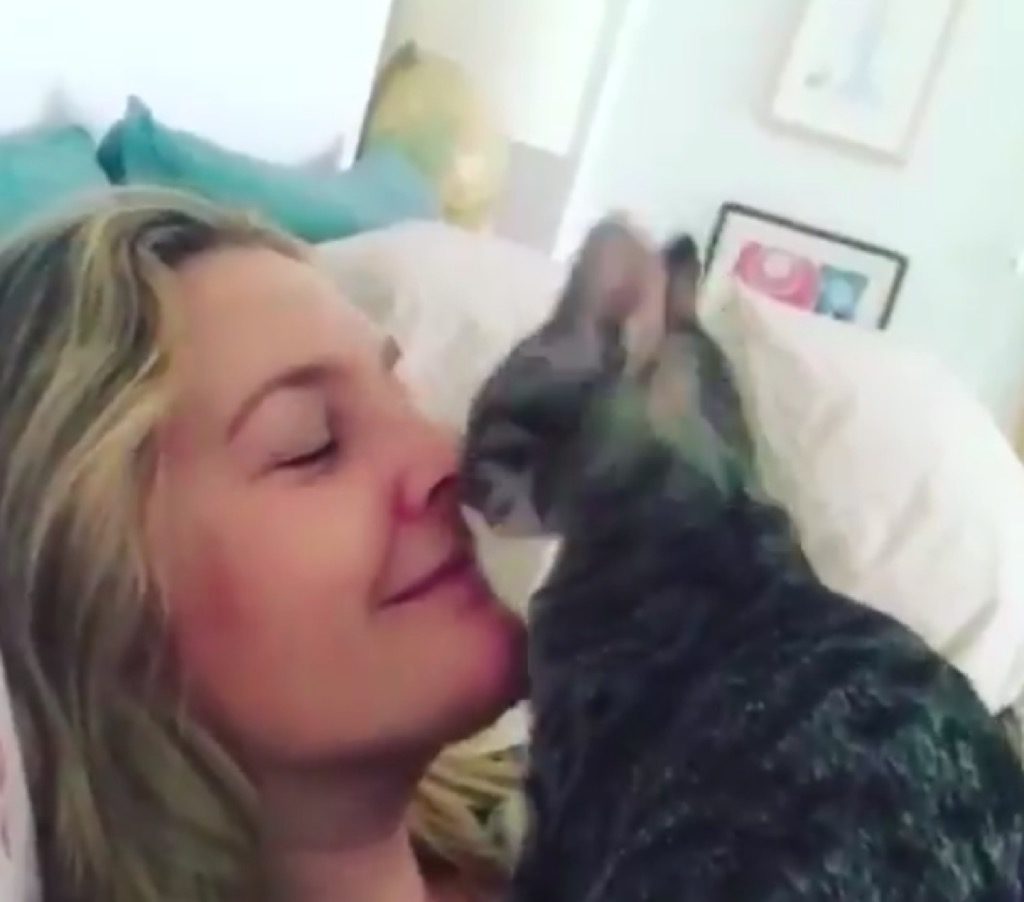 Drew Barrymore adopted her adorable cat Fern along with two cats for her daughters. Now Fern frequently shows up on social media to make the day for cat lovers everywhere. 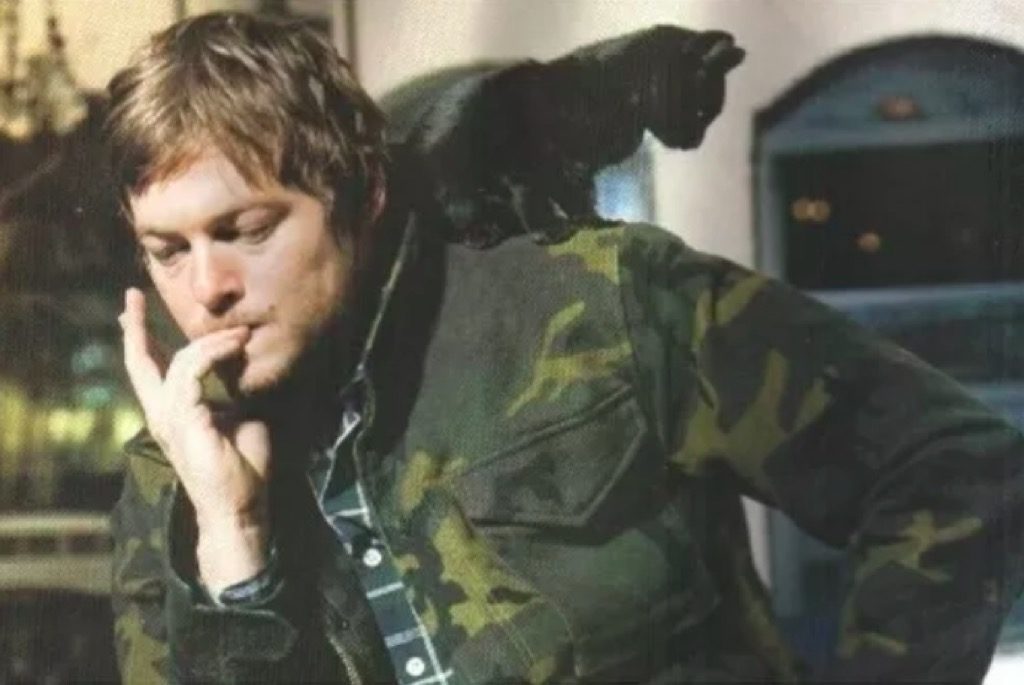 Certainly part of the charm of this cat is that it belongs to Walking Dead tough guy Norman Reedus. But even beyond that, Eye In The Dark—yup, that's the cat's name—is plenty cute on its own. 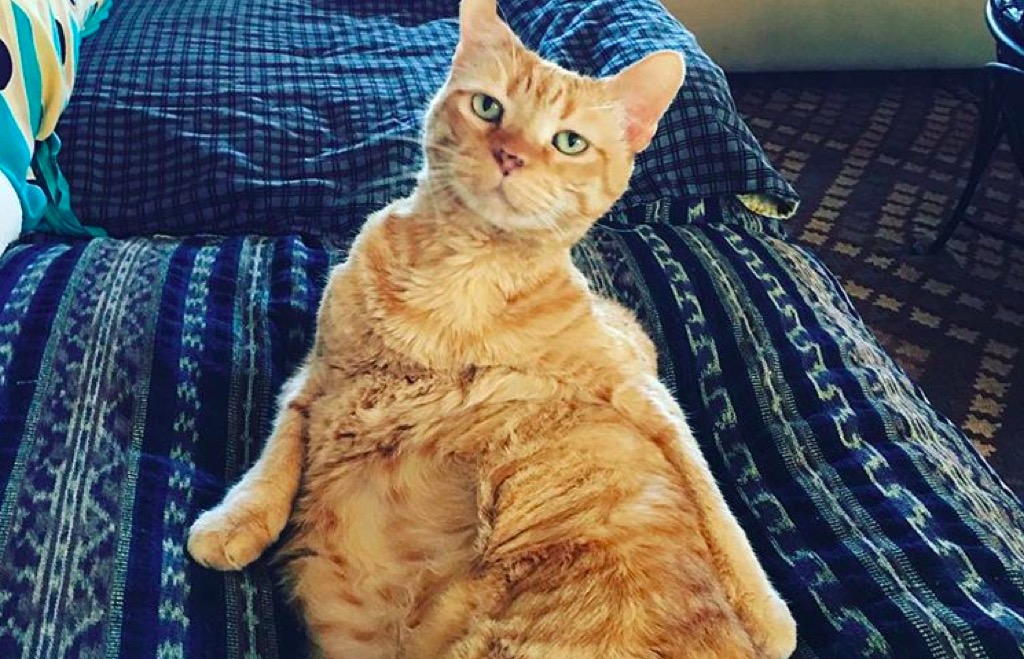 Ian Somerhalder's cat, Moke, is a popular presence on his Instagram account, and for good reason. Just look at that tummy! 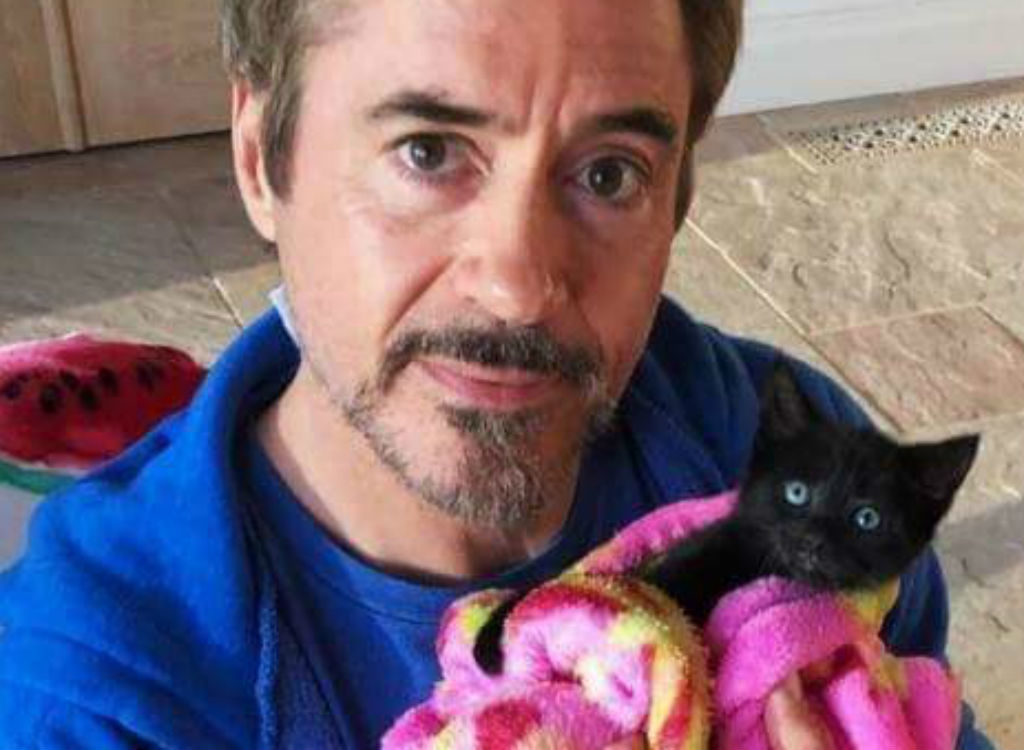 Robert Downey, Jr. is an unabashed cat lover, as is evident in this pic of him holding a little rescue kitten. And sure, the cat is cute on its own, but it certainly gets some help from being clutched by Iron Man, too. 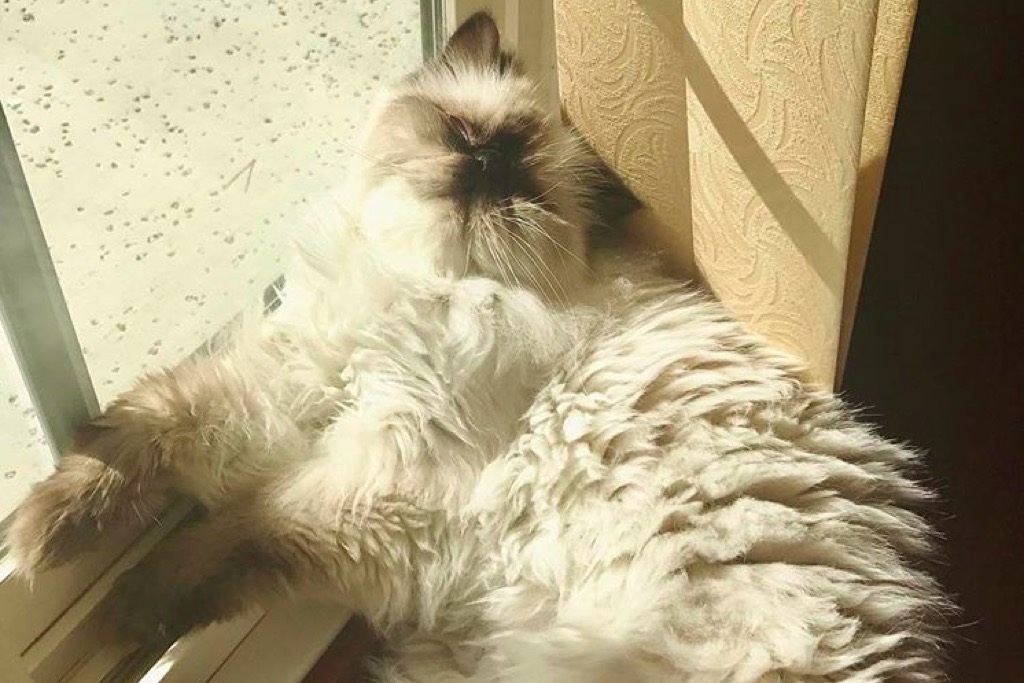 Disney star Peyton Clark is in love with his fluffy cat Cotton, and rightfully so, considering what a cutie it is. 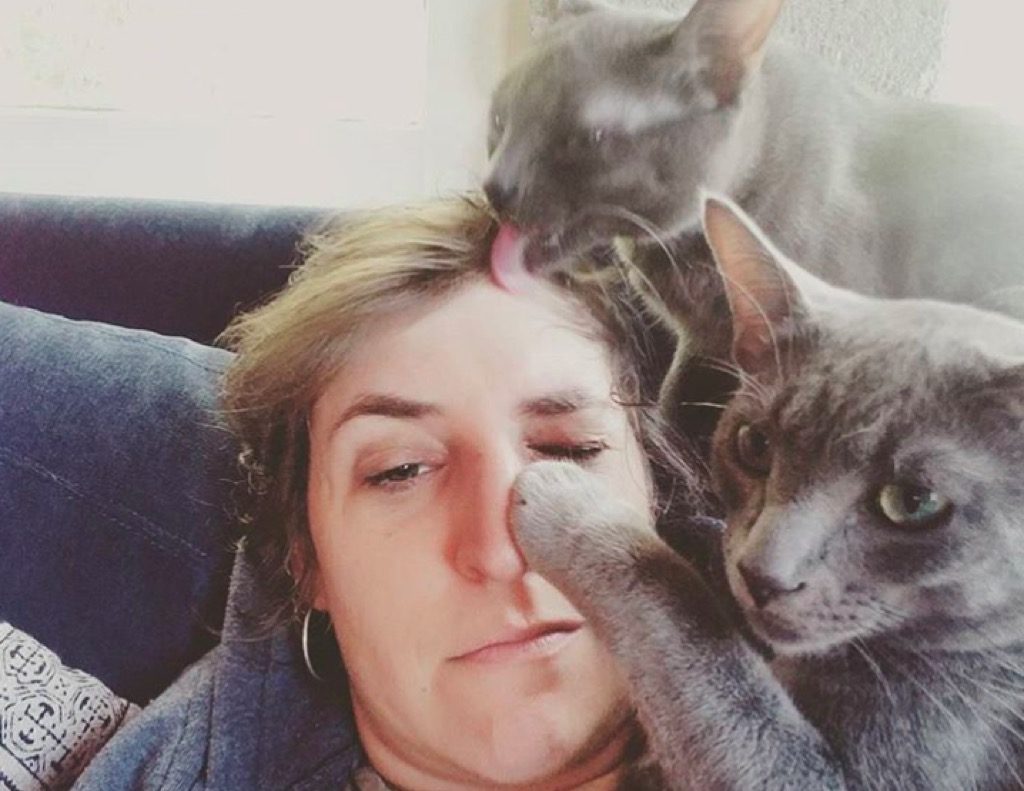 Mayim Bialik is a proud cat lady, as evidenced by this picture of her with just a few of her numerous adorable cats. 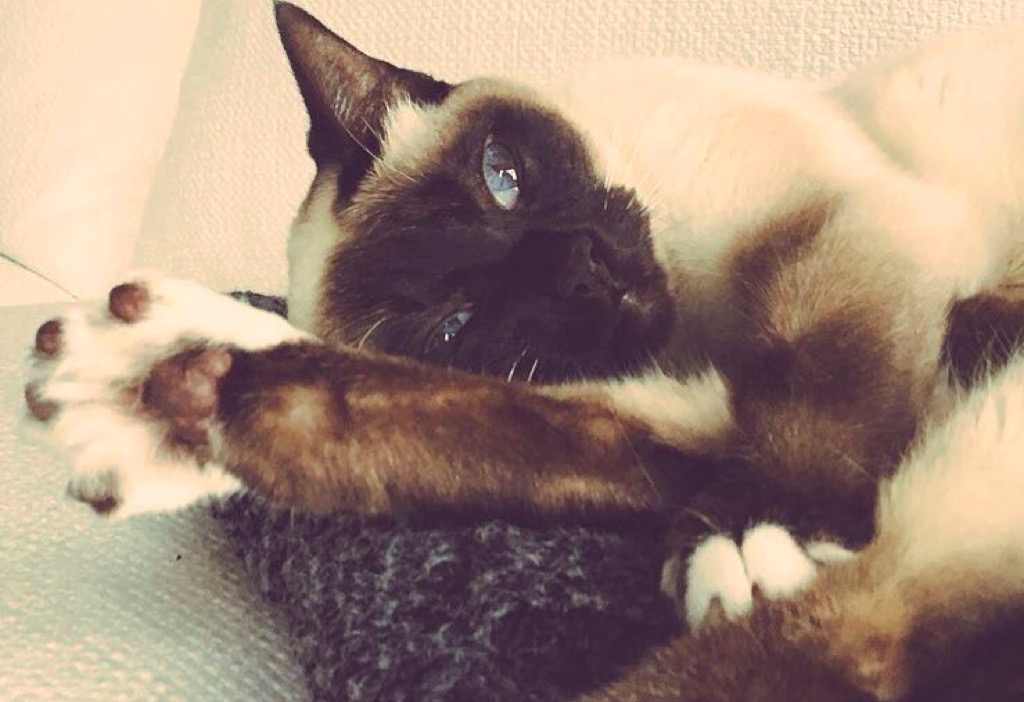 Ricky Gervais might sometimes come across as a bit gruff, but make no mistake: he's a real mush when it comes to his pets. Of course, his beloved cat Ollie is cute enough to bring out the soft side in anyone. 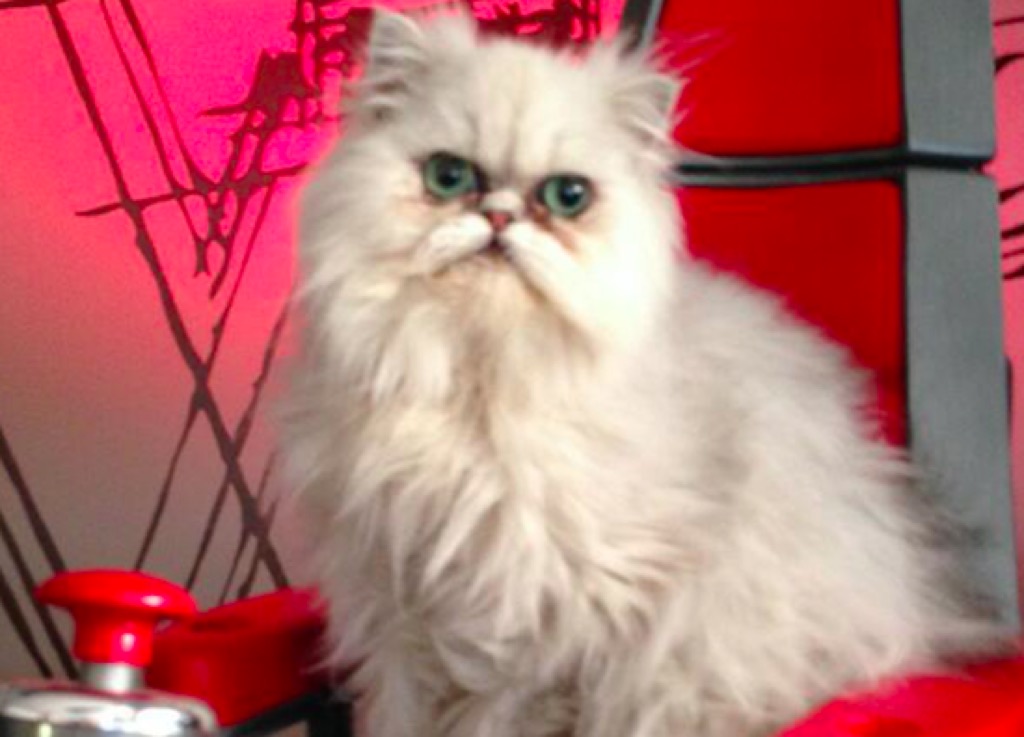 Purrfect, the adorable pet of CeeLo Green, was cute enough to be a regular on The Voice, despite its inability to sing. 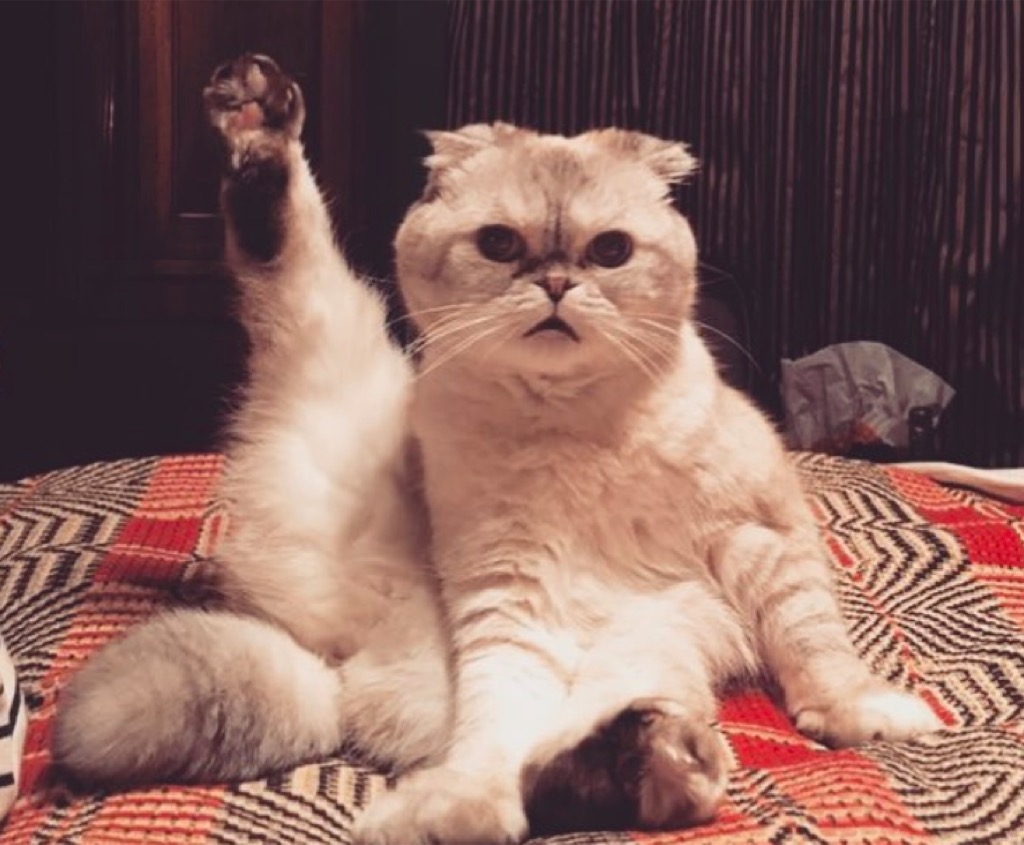 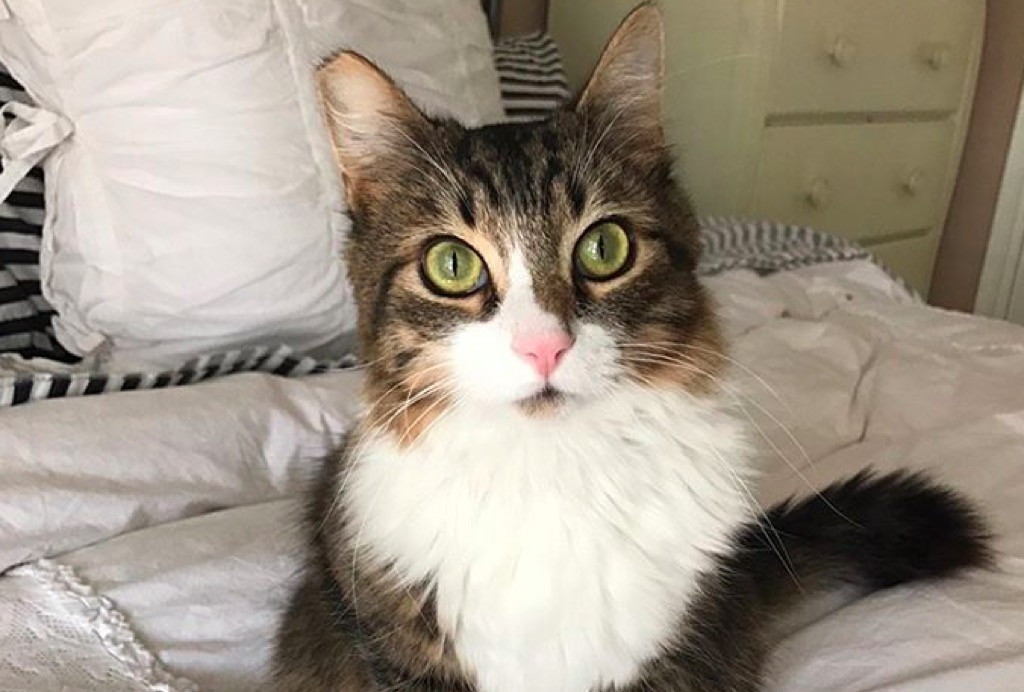 Disney actress Sierra McCormick isn't shy about her love for her cat, Morrissey, who frequently pops up on her social media feeds. 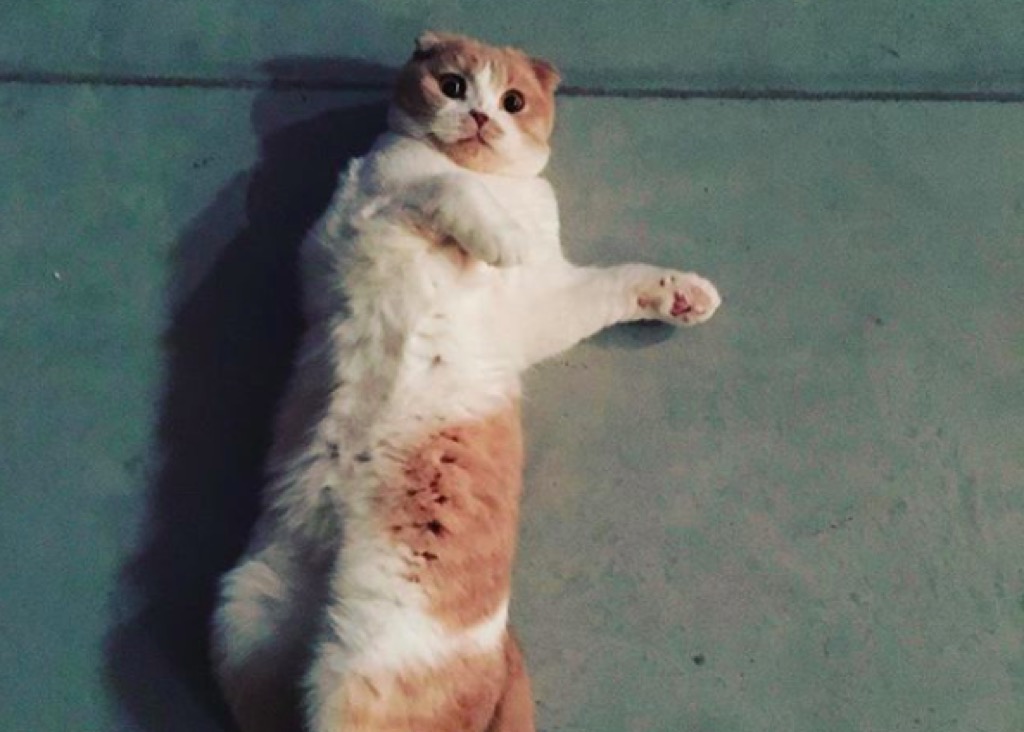 Ed Sheeran is a self-proclaimed lover of cats, and he's rescued several kitties over the years, including this fluffball, pictured celebrating Sheeran's Grammy win. 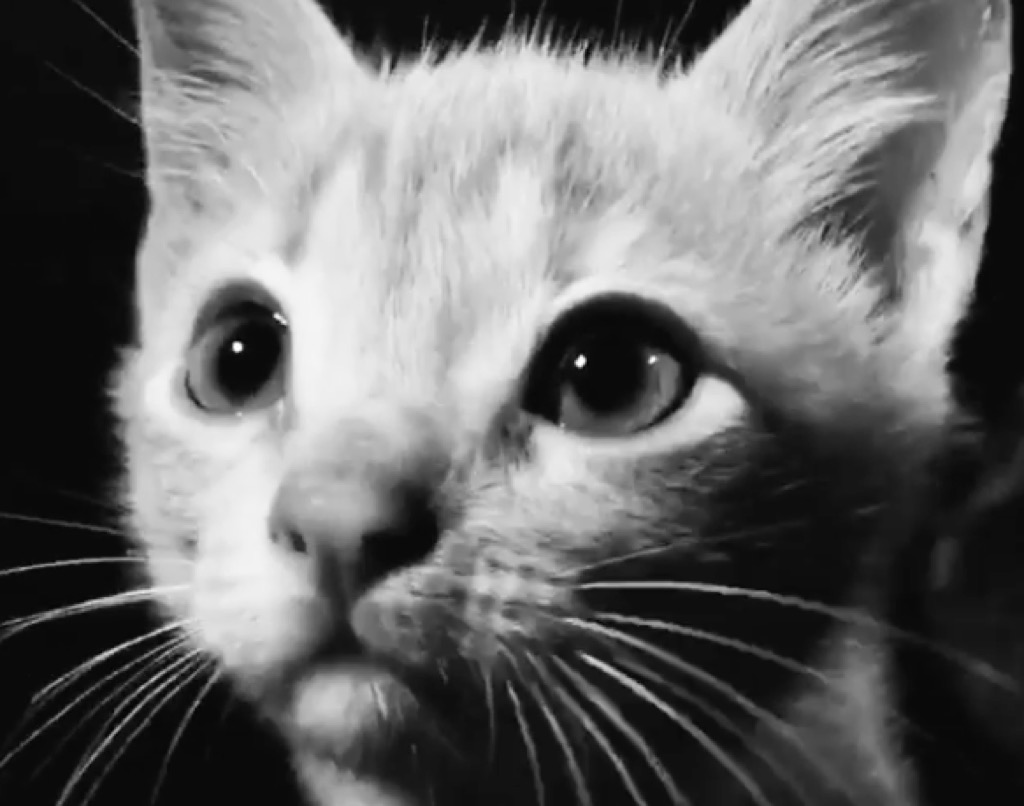 If adorable kittens are your thing, then actress Debby Ryan's cat, The Doctor, is precisely the cat you're looking for. 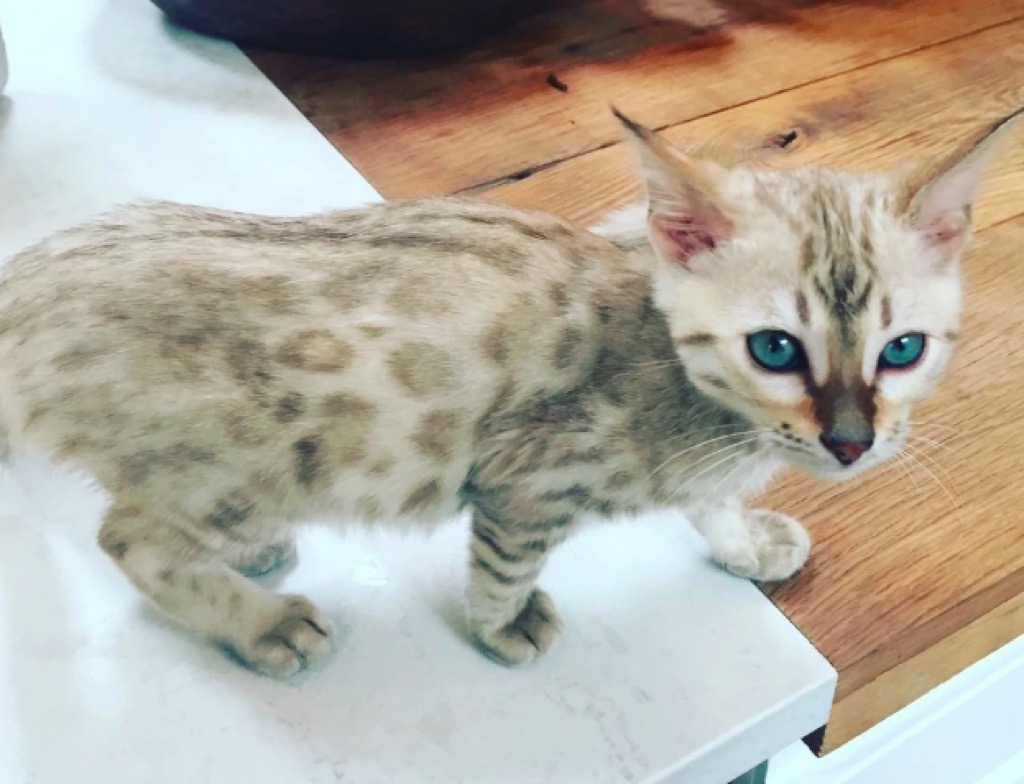 Ellie Goulding's cat, Wallace, might be the conclusive piece of evidence that kittens are cuter than puppies. 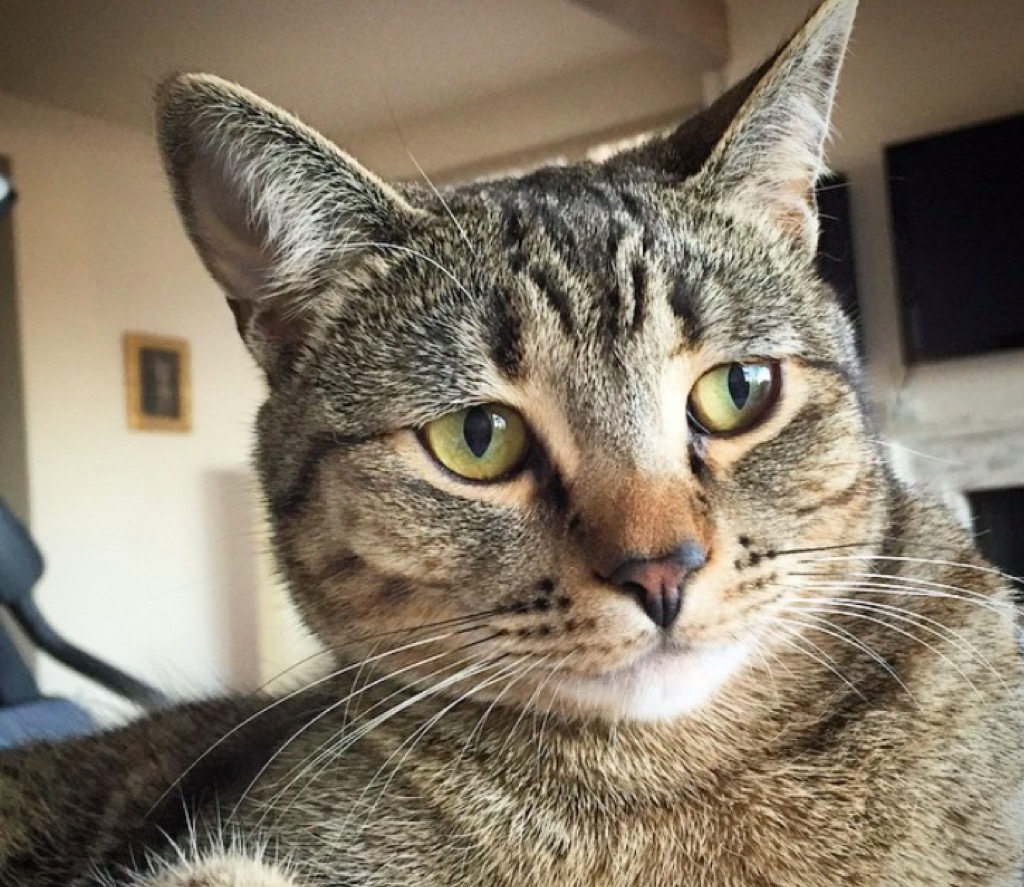 Macklemore's cat Cairo is less adorable kitten and more regal cat who is not to be trifled with. 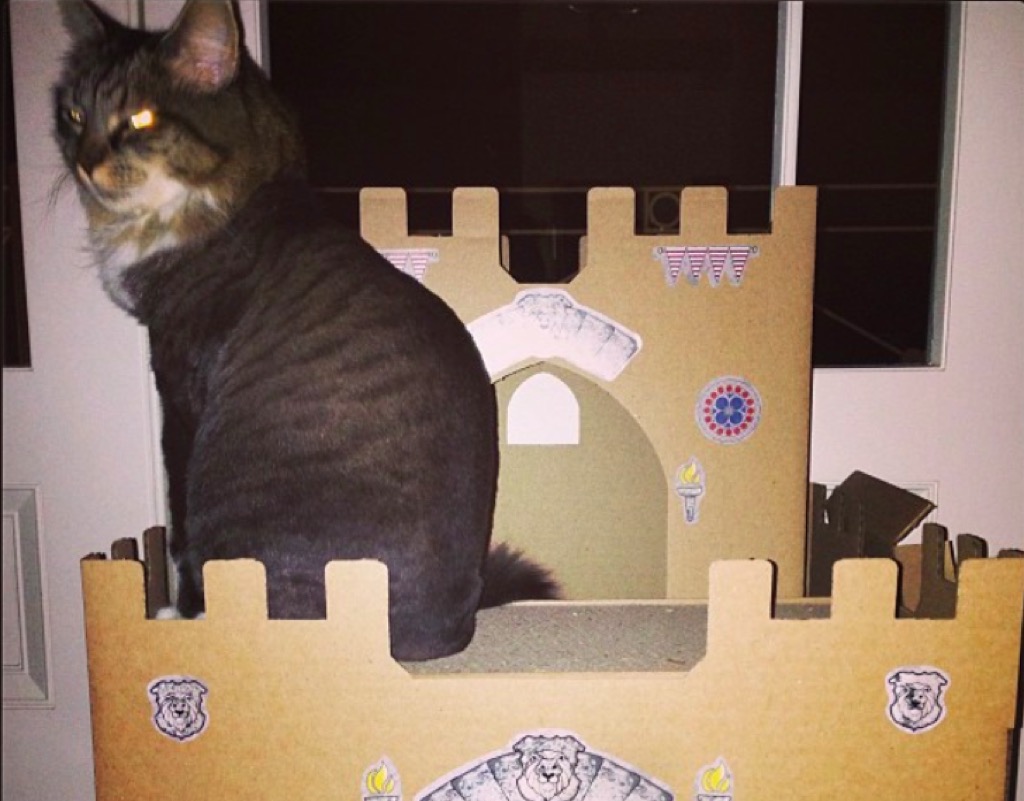 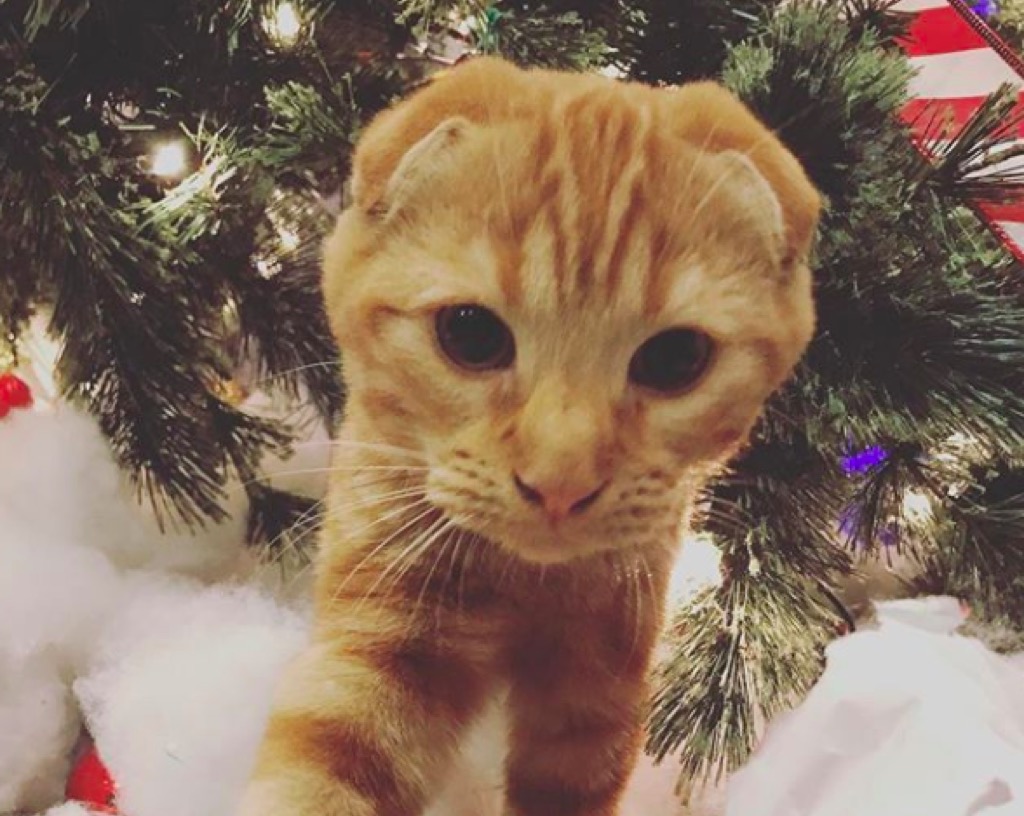 Bella Thorne's cat, Lola, is a Scottish Fold. For those unfamiliar with the breed, that means her ears are always folded up like this for added cuteness. 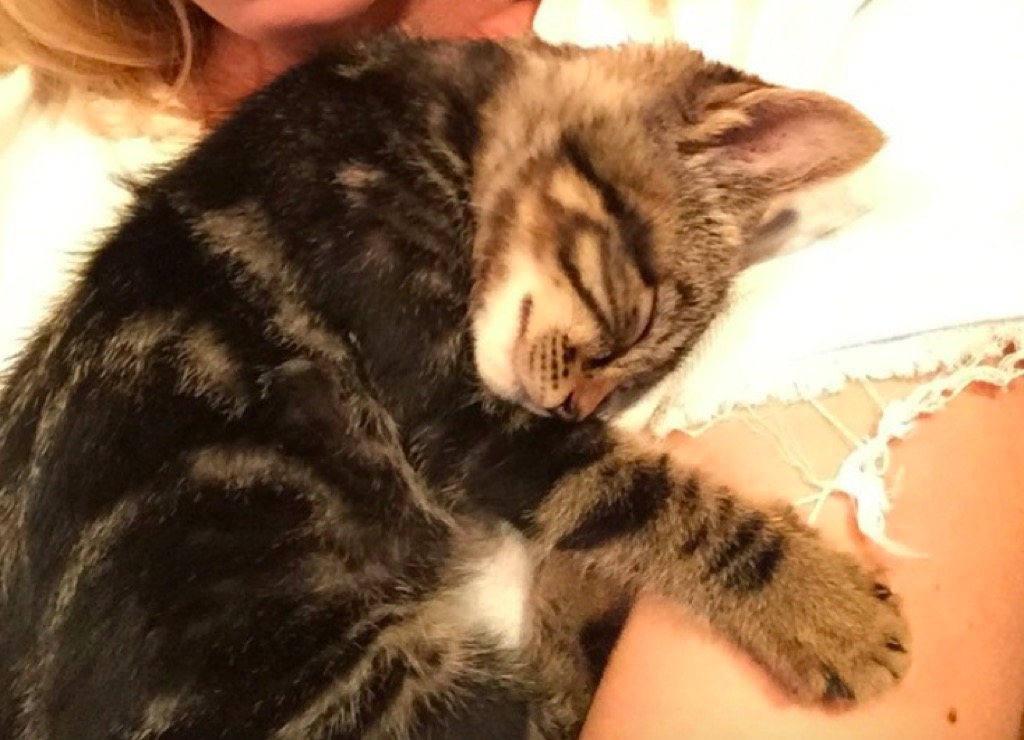 Gigi Hadid's cat, Cleo, isn't one to shy away from a photo opportunity, even if it means she's snapped mid-nap. 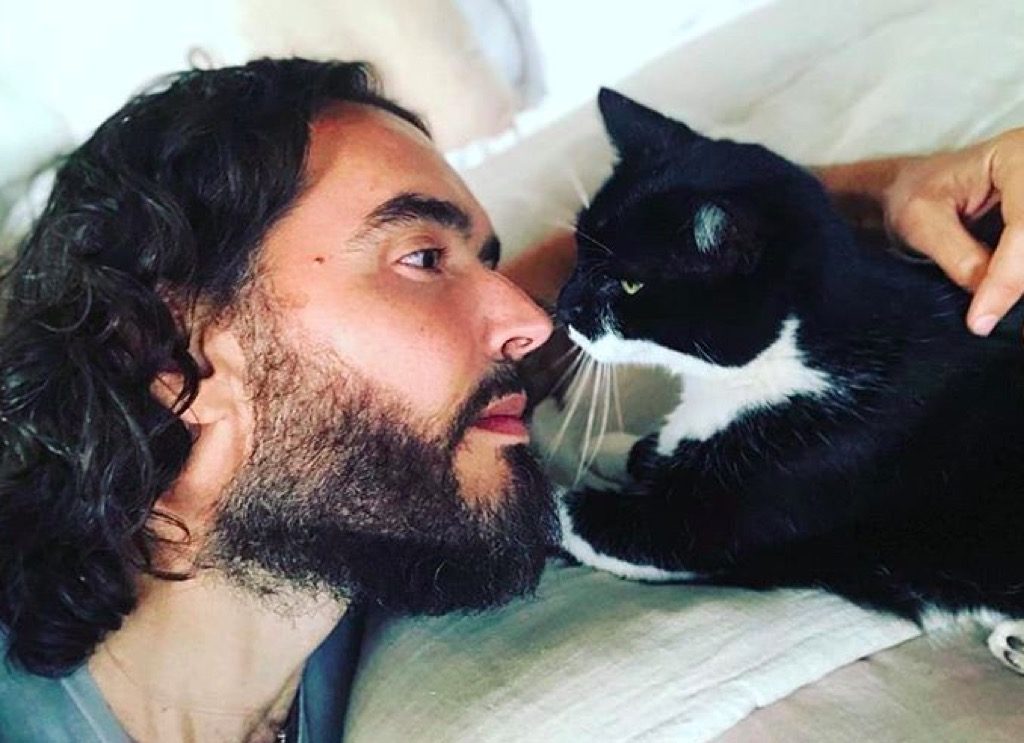 Sierra McCormick isn't the only star with a cat named Morrissey. Comedian Russell Brand also named his pet after the former Smiths frontman. 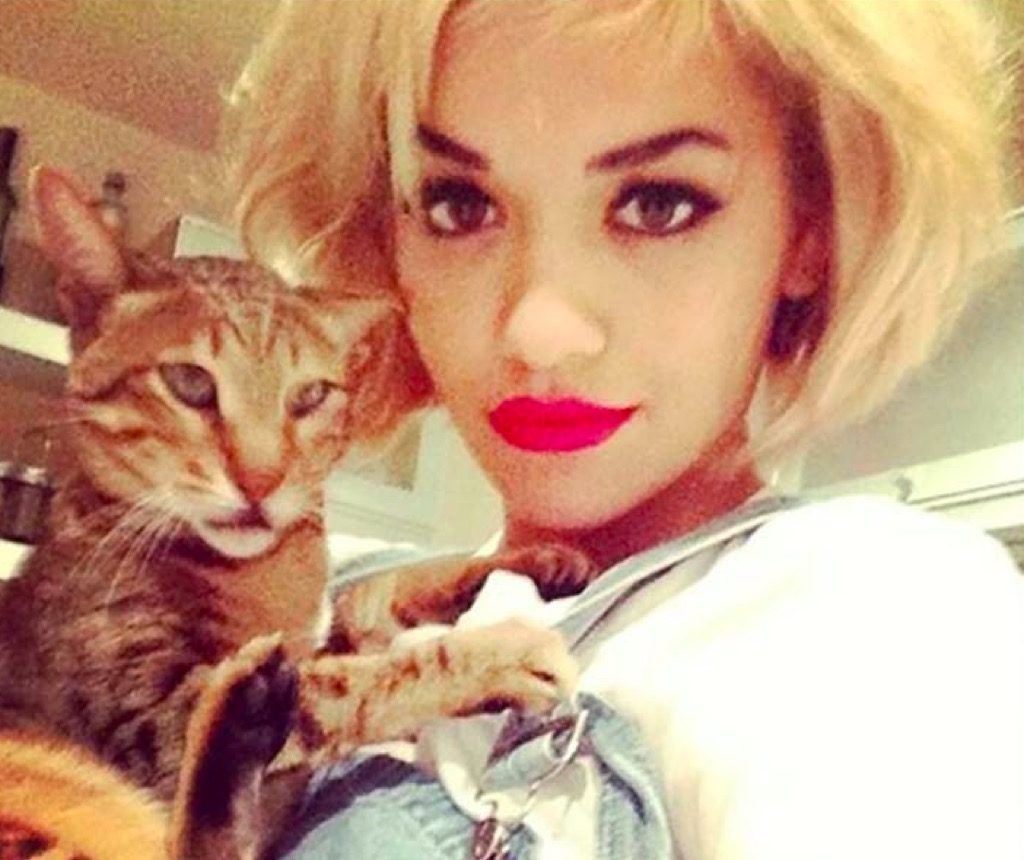 Rita Ora's cat is no stranger to the limelight. On occasion, the singer has been known to carry her cat around town on her arm. 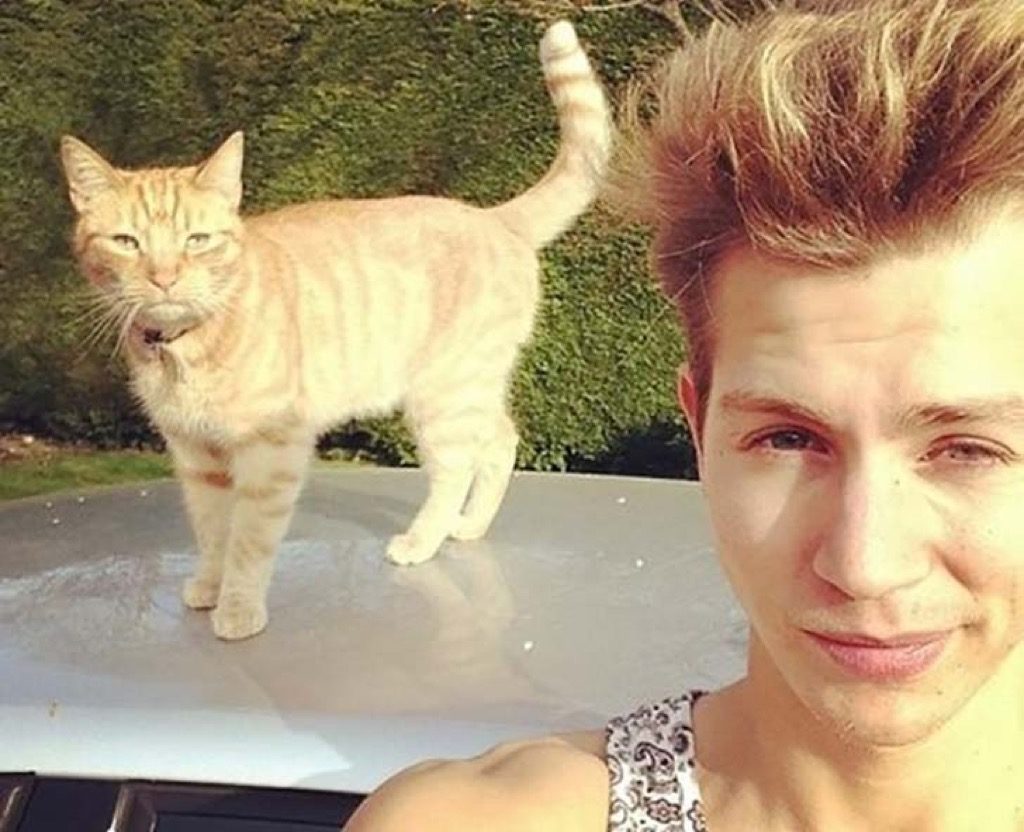 Guitarist James McVey and his cat, Colonel Mickey, are a classic example of a pet and owner looking alike. 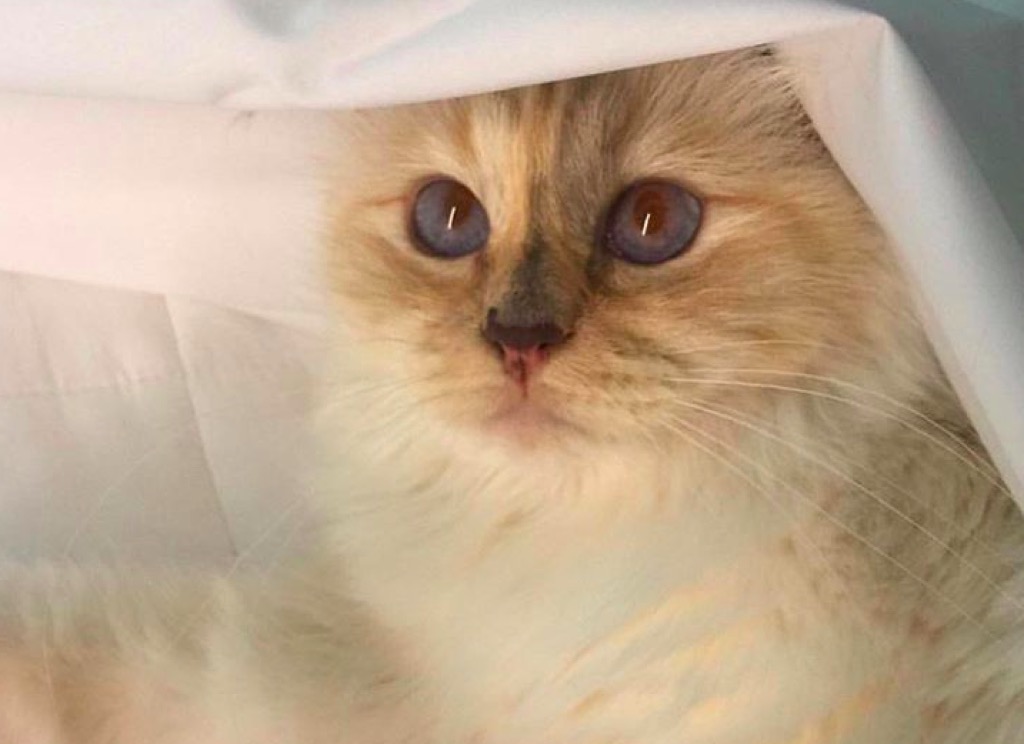 Fashion icon Karl Lagerfeld's cat, Choupette, has got to be one of the most spoiled cats on the planet. Not only does she have her own iPad, her face has been used by Lagerfeld to adorn a line of clothing and accessories. 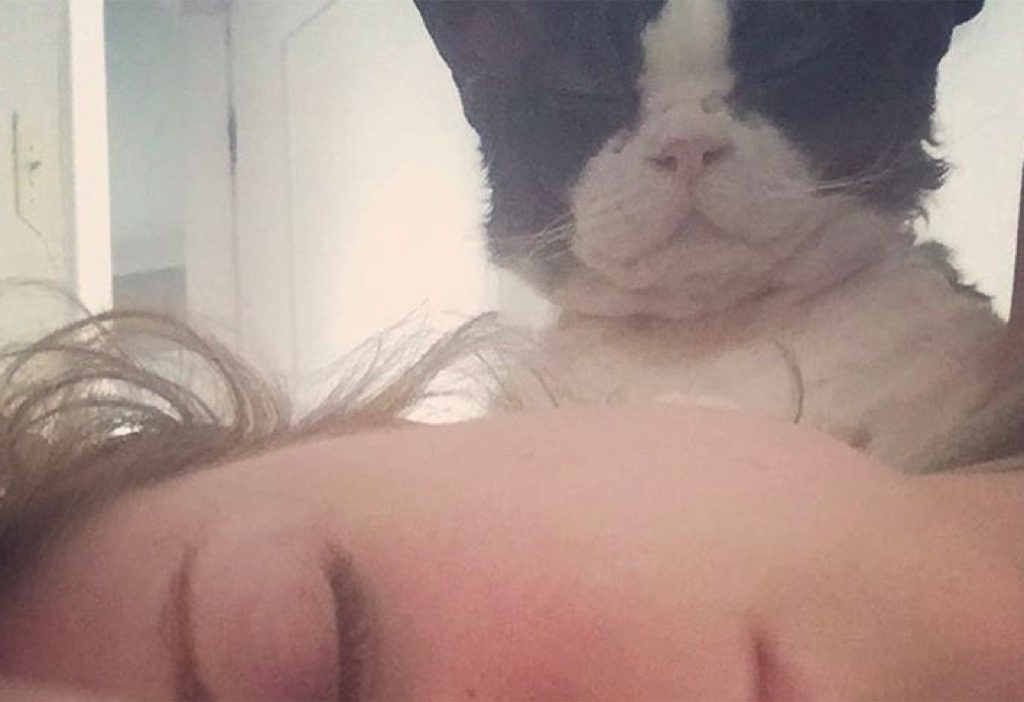 Evan Rachel Wood's pet cat is as adorable as she is intelligent. Apparently, her pet taught itself to use the toilet. 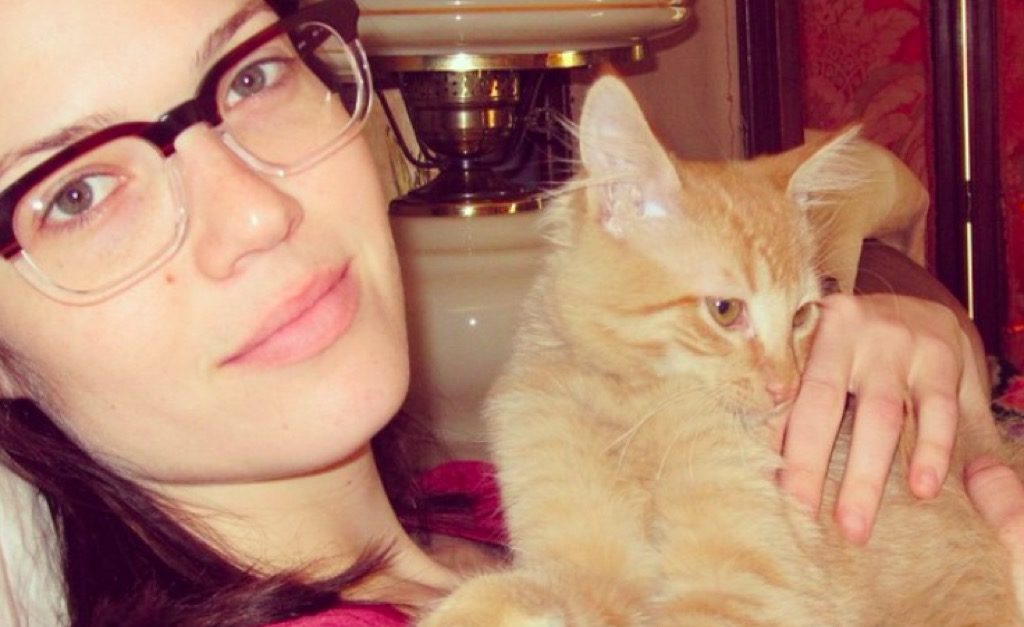 Mandy Moore is a longtime lover of cats. She's rescued several and has even used a pet psychic. 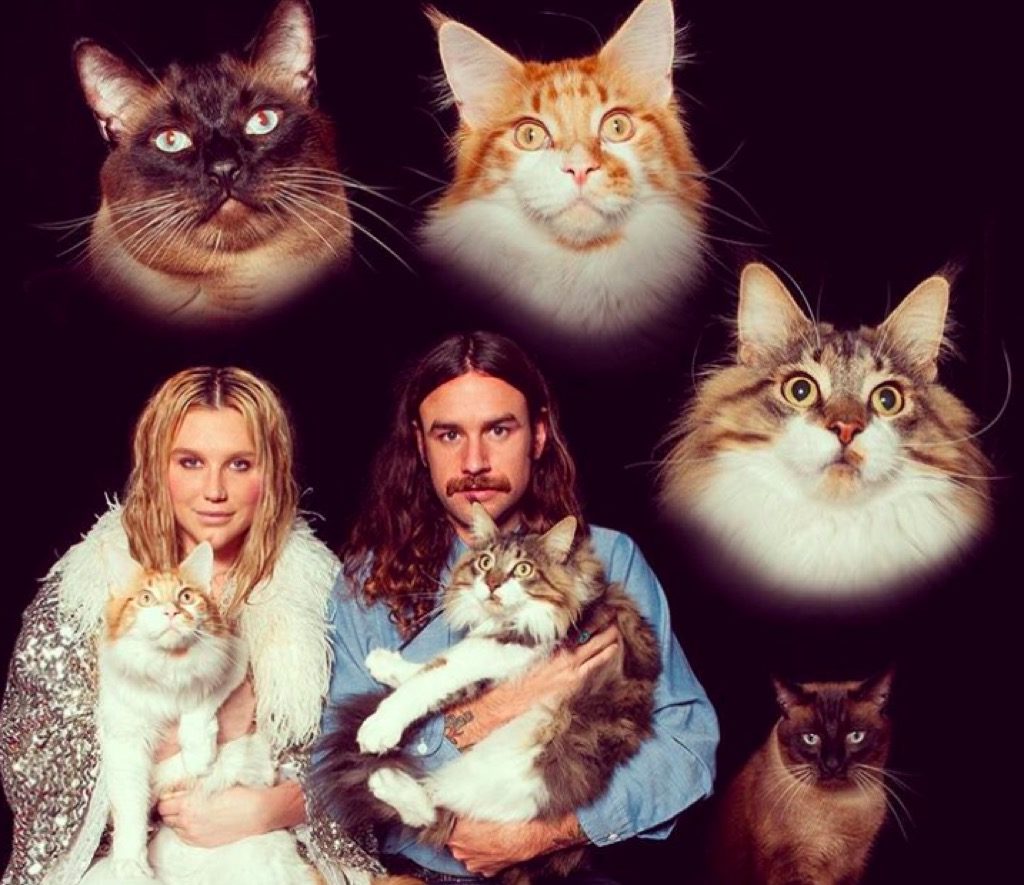 Kesha is a confessed feline fanatic, and at one point she was even talking about starting a cat cult, which isn't too hard to believe when you see how cute her many cats actually are. And if these cute cats have got you wanting a pet of your own, discover the 15 Amazing Benefits of Adopting a Pet.