These locked-up looks are nothing short of hilarious.

Getting arrested is rarely a glamorous process: You do something criminal, you get put in the back of a police car, and your photo gets plastered online, for friends, family, and future employers to see. However, for celebrities, for whom getting in a bar fight or screaming at a police officer rarely has life-altering consequences, those photos snapped in the slammer are a lot funnier than they are for average folks.

From smirky celebs to those who seem to think the booking room is a runway, these celebrity mugshots are sure to make you crack a smile. 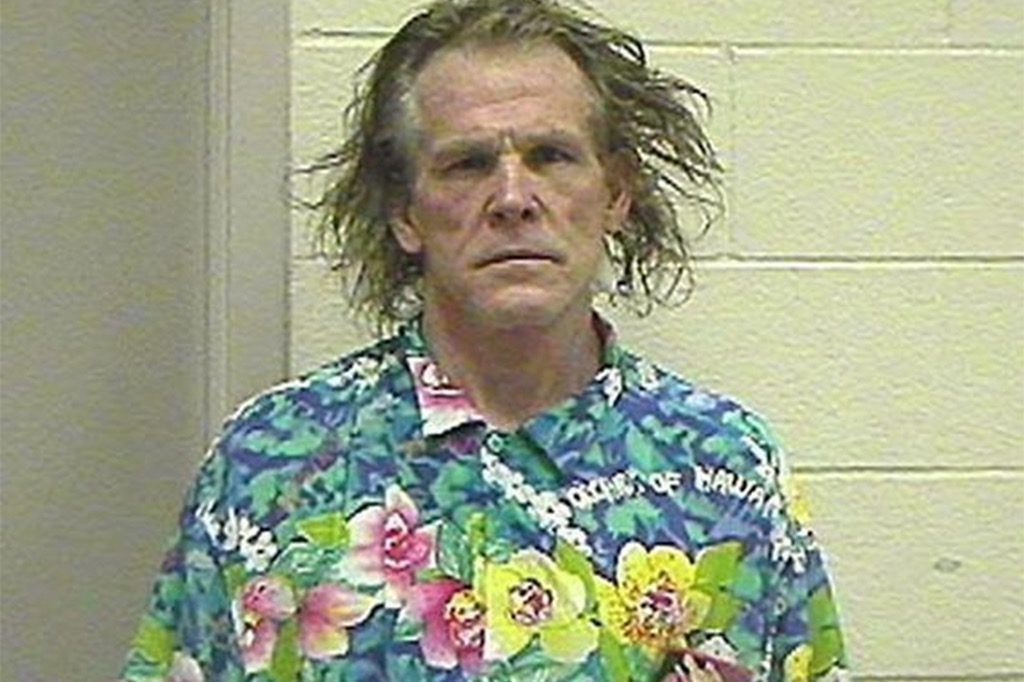 Nick Nolte's 2002 arrest photo for DUI is one of the most infamous celebrity mugshots out there, plastered on everything from celebrity websites to t-shirts in the years that followed. The combination of his gravity-defying hair, Hawaiian shirt, and wild-eyed look is enough to earn this picture of People's former Sexiest Man Alive a spot in the mugshot hall of fame. However, it seems time has given the actor some perspective on the events of that day, admitting in his memoir, Rebel, that he looked like "an asylum inmate" in the photo. While the star of The Affair is generally known for his clean-cut good looks, his scruffy, surprised-looking face in this 2002 mugshot is worthy of framing. And while the then-24-year-old former Dawson's Creek star, who was arrested for assaulting a security guard, seems to have kept on the straight and narrow ever since, his former partner, Diane Kruger, admitted to Jimmy Kimmel that her mother even questioned him about the arrest photo when they first met. 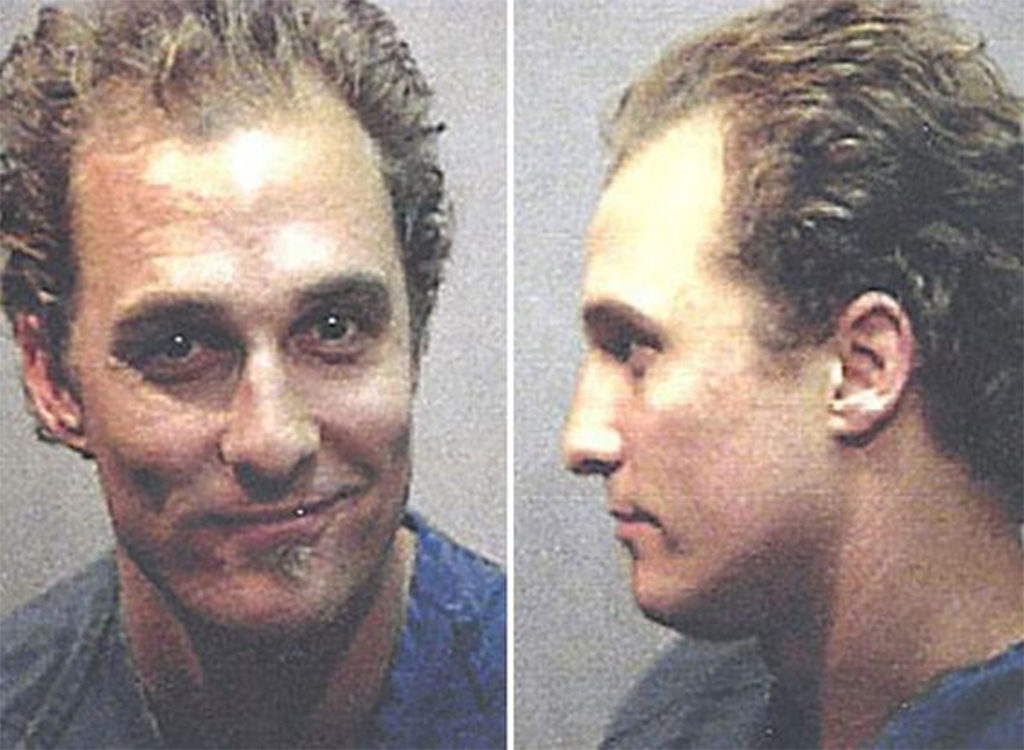 Matthew McConaughey's reputation for having a good time certainly wasn't diminished in the slightest by his grinning 1999 arrest photo. The actor, who was caught playing the bongos naked and arrested for suspected marijuana possession, drug paraphernalia, and resisting arrest, didn't seem to feel that bad about the incident a few years later, telling Playboy, "What's wrong with beating on your drums in your birthday suit? I have no regrets about the way I got there." Boy, he is not happy camper! The Oscar-nominated actor Josh Brolin didn't exactly look like his usual movie star self in this 2013 booking photo snapped after his arrest for public intoxication. It seems that Josh's serious grimace in the photo doesn't actually reflect his feelings about the incident, however, calling the arrest, "A pretty innocent thing" in an interview with Good Morning America. Brolin's grimace is sure to go down in the celebrity mugshots hall of fame. While Shia LaBeouf's 2014 arrest for disorderly conduct, harassment, and criminal trespassing for screaming at the actors during a performance of Cabaret in New York probably wasn't that fun for the show's stars, this goofy, grinning mugshot is certainly worth a chuckle from anyone else. While Bill Gates seems like a guy who might get voted "least likely to get arrested" in his high school yearbook, that didn't keep the Microsoft founder from meeting with Johnny Law in this 1977 mugshot. His arrest for a traffic violation has all the elements of the truly great celebrity mugshots, from the shaggy hair to the tinted glasses to the incredible stripes-and-florals combo. And that grin? Icing on the cake. You don't forget how to turn on the charm just because you're posing for police instead of a fashion photographer, as evidenced by Kimora Lee Simmons' 2004 mugshot. The model-turned-designer was arrested for marijuana possession after being stopped by Saddle River, New Jersey, police after she allegedly refused to pull over her car. After being arrested for speeding in Miami Beach while under the influence and resisting arrest in 2014, Justin Bieber shared this mugshot with fans on Instagram, vowing that, despite the good hair day he was having in the photo, it would never happen again. "#jailisnotacoolplacetobe #notfun #never again," he captioned the pic. After a 2001 bar fight for which Vince Vaughn was arrested and in which actor Steve Buscemi was stabbed by a third party, the former actor was snapped in this classic celebrity mugshot. We're not sure if it's his bleary eyes or his pouty face that makes this photo slightly funny, but it's definitely a far cry from the polished actor we're used to seeing on screen. 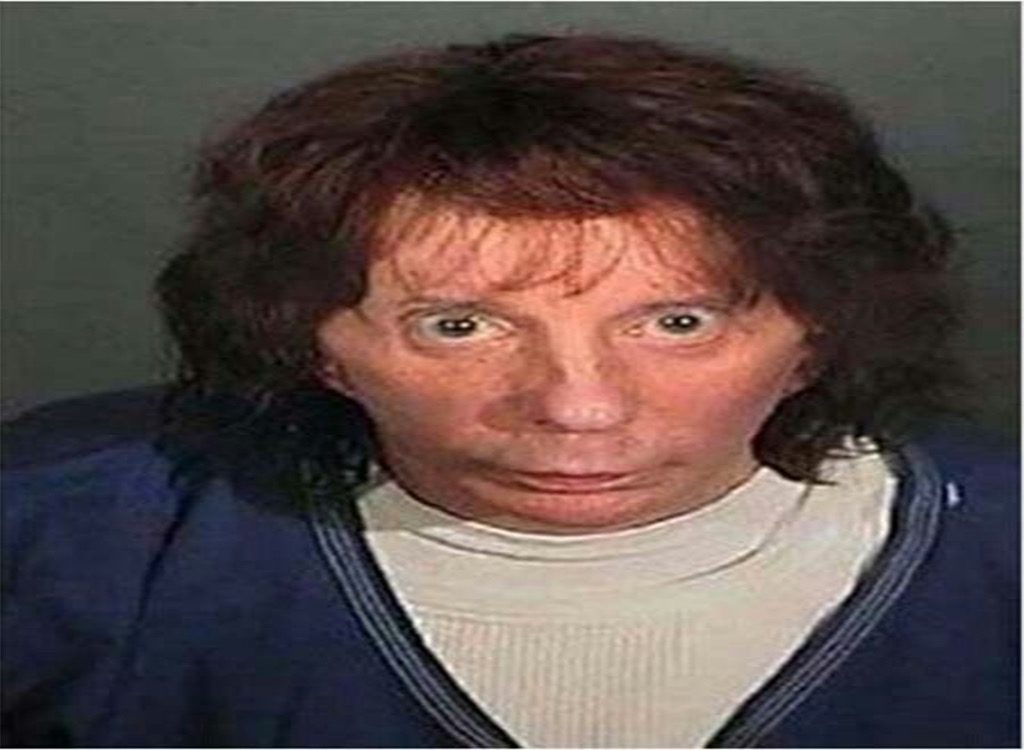 Vanilla Ice, AKA Robert Van Winkle, has certainly seen his career falter over the years, but his mugshot is still a record-holder. His goofy smile, botched Caesar haircut, and strange expression all make this one of the few celebrity mugshots to remain unforgettable. Hugh Grant, known for his role as the befuddled British boyfriend in half of all '90s romantic comedies, didn't seem to find things so funny when he was arrested for solicitation in 1995. However, his sheepish grin, pronounced unibrow, and incredibly '90s shirt are definitely a little bit funny in retrospect. Long before he was Iron Man, Robert Downey Jr. was an actor who just couldn't stop getting arrested. However, his 1999 arrest for drugs yielded his most humorous mugshot, the cockeyed placard and smug grin on his face making it one of the goofiest celebrity mugshots of all time. Long before The Fighter revitalized his career, actor Mickey Rourke was arrested in 1994, yielding this oddly coy black-and-white photo that looks more like a publicity still for a movie than a mugshot. Repeated guest of the state and Teen Mom star Jenelle Evans may not have exactly reflected the somber nature of what was actually her second arrest in a single week in this grinning photo. Based on the photo alone, with his wild hair, half-open mouth, and raised eyebrows, most people could probably guess that actor Rip Torn's 2006 arrest was for driving under the influence. While Andy Dick's repeated arrests are no laughing matter, this mugshot is certainly among the more hair-raising arrest photos out there. Flavor Flav's rumpled appearance and the look of deep contemplation on the Public Enemy rapper's face make this 2012 mugshot pretty hard to beat. Funnier still, he adopted almost the exact same face when he was arrested again for a traffic stop in 2015. Clearly, DJ Samantha Ronson was in no mood to be arrested for DUI back in 2011, as evidenced by this snarky-looking snap. Of course, even the Antichrist Superstar himself looks a little embarrassed when embraced by the long arm of the law. With a sheepish look on his face and without his trademark makeup, Marilyn Manson's whole "prince of darkness" thing doesn't exactly translate in this 2001 mugshot.

Sarah Crow
Sarah Crow is a senior editor at Eat This, Not That!, where she focuses on celebrity news and health coverage. Read more
Filed Under
Celebrities • Entertainment • Funny
Read This Next
Latest News
Read This Next