Dust off your favorite chain wallet and join us on a trip to the past.

Timberlands that never once graced a construction site. Surf shorts that never saw a beach. Boat shoes that never set foot on a dock. The '90s were, if nothing else, a perplexing time for fashion. From the ankle-bearing allure of capri pants to the ease of throwing your hair up with a brightly-colored scrunchie, you probably have some regrets. But at the time, some seriously '90s fashion trends were only worn by the coolest of the cool. Read on for the definitive list of the phattest, flyest style moments from this defining decade, and don't be surprise if you end up shopping vintage clothing on style when you're done. For more from this multi-faceted era, check out The Biggest '90s TV Teen Idols, Then and Now.

Military-inspired style proved to be immensely popular in the '90s. And leading the charge was the iconic bomber jacket. Designer Raf Simons spearheaded the trend that got an added boost from Tom Cruise in Top Gun and Natalie Portman in Léon: The Professional.

To see how the movies that spoke to you back then stack up against each other, check out Ranking Every '90s Teen Movie, From Worst Reviewed to Best.

Supermodels like Naomi Campbell and Kate Moss catapulted the slip dress to new levels of infamy in the '90s. It's no secret that the last decade of the 20th century was all about minimalism in every sense of the word. But this '90s fashion trend proved just how minimal style could truly go. Slip dresses left little to the imagination, hugging every curve.

At one point, they were just reserved for tourists to keep a watchful eye on their belongings. But fanny packs found a captive and even fashionable audience in the '90s. The late Karl Lagerfeld himself created his very own fanny pack for Chanel, which premiered on the brand's runway in 1994. From that point on, the decade witnessed the debut of countless other designer and mass-produced fanny pack styles that would eventually epitomize an entire decade of fashion.

For the artists you were obsessed with in high school, check out 13 Huge Concerts Every '90s Kid Was Dying to See.

Nothing epitomizes the grunge look of the '90s like plaid flannel shirts. Rockers like Kurt Cobain, heartthrobs like Jonathan Brandis, and "it" girls like Claire Danes alike wore them, whether slouched over their shoulders or tied around their waists. 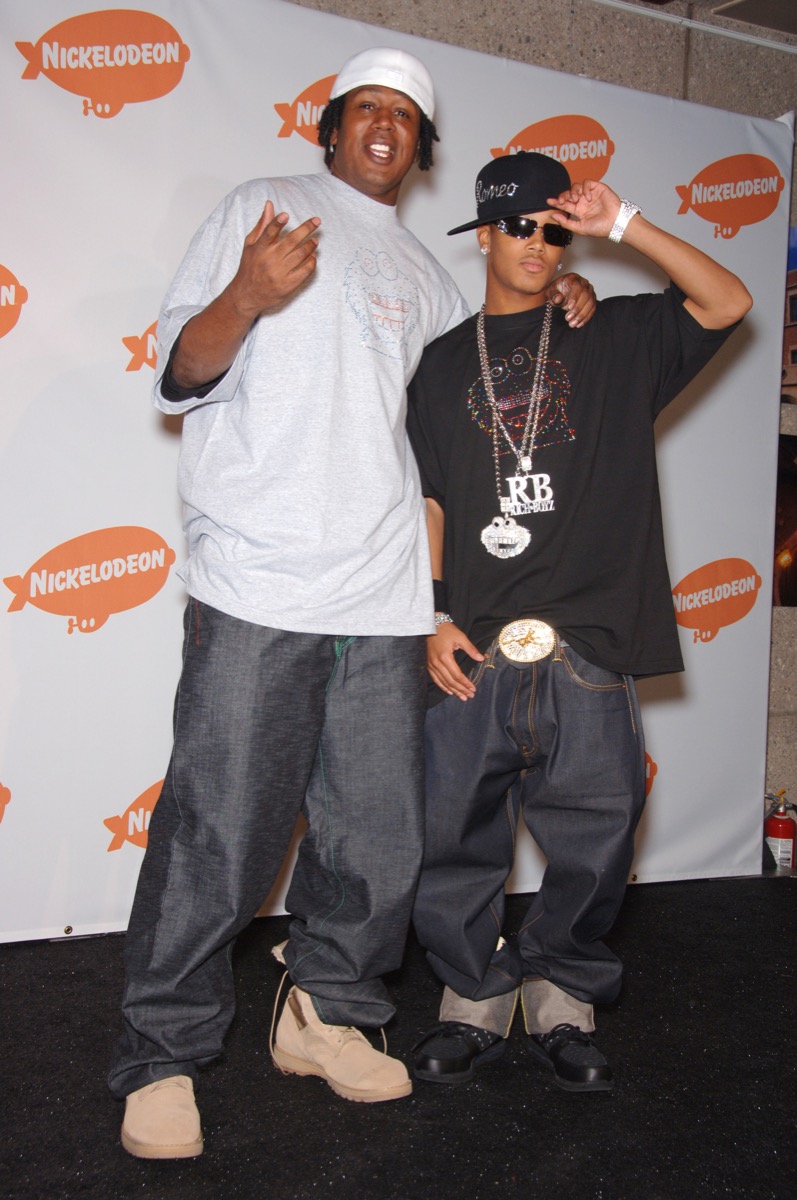 Timberlands go much further back than the '90s. Nathan Swartz initially designed the boots with blue collar workers in mind. But in the '90s, they became a status symbol in hip-hop. Everyone from Nas to Notorious B.I.G. wore them—and rapper and producer Timbaland even named himself after the construction boots.

Think you remember everything about the decade? Can You Answer These Trivia Questions About the '90s?

You can thank stars like Jennifer Aniston and Tyra Banks for this trend, which kept in line with the minimalism that dominated '90s fashion trends. In their own way, baby tees reinforced the "less is more" approach. And they were the precursor for the crop tops that took over in the early 2000s.

It's safe to say that the biggest hair accessory of the '90s was the scrunchie, available in a whole host of colors, sizes, and fabrics. They adorned the high ponytails of almost every teen girl on Full House and Saved By the Bell and even made their way to the big screen.

From Thelma & Louise to the movie version of Buffy the Vampire Slayer (RIP Luke Perry), you just couldn't escape the scrunchie in the '90s. A certain red one was even used as a metaphor for power in Heathers.

For the most impactful celeb who shares your birth year, check out The Biggest Star Who's the Same Age as You.

This relic of the '90s was more about fashion than function. Chain wallets were a mainstay in the punk and grunge scenes at the time, even though they're now considered the "Nickelback of accessories."

After every member of the Spice Girls sported chunky sneakers in the "Wannabe" music video, it wasn't long before women everywhere started to covet them. If you fell for this '90s fashion trend, chances are you got yours from an Alloy or Delia's catalog.

For more nostalgia sent right to your inbox, sign up for our daily newsletter.

Board shorts, of course, were typically worn by surfers. But that didn't stop young people in the '90s from wearing Roxy, Billabong, or O'Neill shorts when they were nowhere near the ocean. The guys' version was super long and the girls' was extra short. But they were pretty practical—instead of buttons and zippers, the fly was typically made of velcro.

Your '90s grunge look wasn't complete without a pair of combat boots. They reigned supreme, but Doc Martens specifically were the kings of the shoe market. Whether you wanted floral ones, a crushed velvet look, metallic material, or yes, even plaid, there was truly a Doc Marten for everyone.

Penny loafers, a shoe once largely associated with school uniforms, took a turn for the trendy in the '90s. While the classic brown styles were still popular, these shoes were also transformed by designers in this decade, with the addition of buckles and chunky platform heels. They were frequently paired with babydoll dresses, that is, if you were super cool.

While overalls have been the uniform of farmers since time immemorial, the '90s made them a must-have fashion trend for adults. Whether long, short, patterned, or plain, there was no wrong way to wear your overalls in the '90s. But if you wanted to prove just how cool you were, you'd definitely leave one side undone.

Throughout the '90s, babydoll dresses became a fashion staple for goths, punks, and Lilith Fair attendees alike. The trend's popularity surged, thanks in no small part to Hole front woman Courtney Love, who frequently wore micro-mini versions of the style on stage, complete with bows and lace.

They may have been the go-to pants of Gap employees, accountants, and pretty much everyone's dad in decades prior, but in the '90s, chinos had their moment in the sun. Whether worn baggy or fitted and cuffed, these former hallmarks of square style were suddenly cool in the '90s. Presumably, we have James Van Der Beek and the rest of the cast of Dawson's Creek to thank for that.

Much like chinos, the rise of the docksider among younger people was undeniably perplexing to those who'd known them as decidedly uncool dad shoes in the decades prior. That said, if you wanted to make it clear you were a trendsetter in the '90s, it was time to head to your local mall to check out their Sperry selection.

Clearly, in the '90s, it cool for adults to dress like overgrown toddlers. Case in point: The popularity of the horizontally-striped sweater, a trend that became synonymous with grunge style, courtesy of Kurt Cobain and Jared Leto as Jordan Catalano on My So-Called Life.

If it didn't look like your head was being held on by your necklace in the '90s, you couldn't call yourself cool. Instead of traditional drop chains, '90s trendsetters were all about the choker, whether wearing them in lace, leather, or stretchy plastic "tattoo" form.

Long before the advent of the smartwatch, there was the G-Shock. The chunky watches, which came in a range of colors, from all-black to pastels, were about as technologically-advanced as timepieces got back then. You could even store phone numbers and load games on them. Truly, they were all that and a bag of chips. 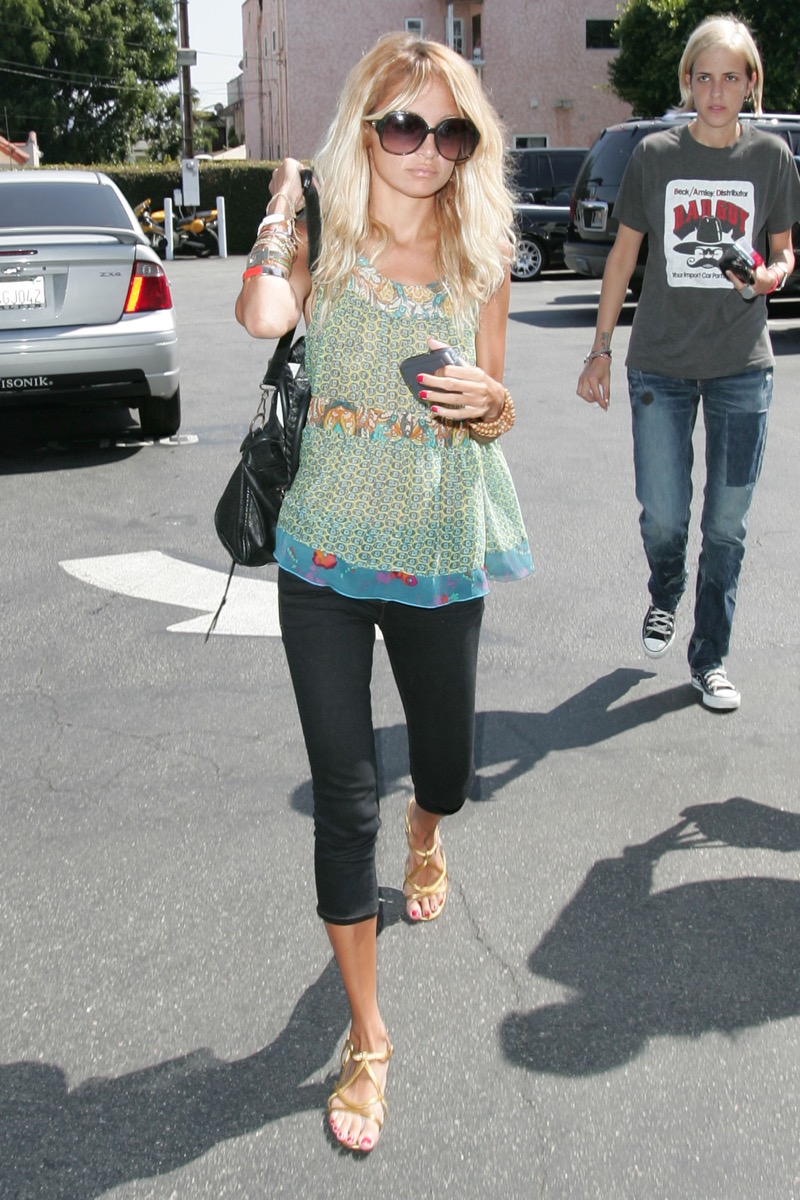 Not quite pants, not quite shorts, capri pants were all the rage among cool kids in the '90s. If you wanted to really push the look into trendsetter territory, they were best accompanied by platform flip-flops (Rocket Dog, of course) and a midriff-bearing tank with very thin straps.

While tank tops have long been a summer staple, the '90s saw the rise of the spaghetti strap. They didn't typically show much more than a collarbone, but they were deemed so scandalous that many schools had outright bans on them. 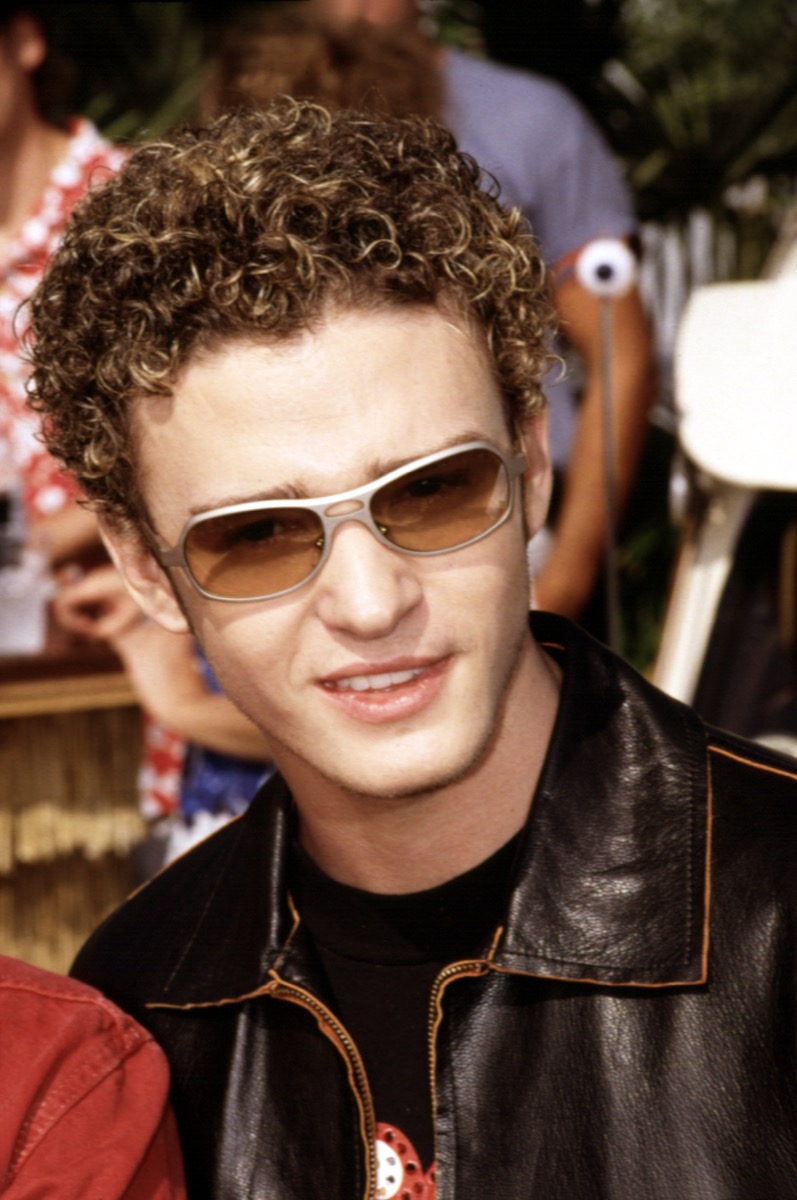 Though the Oakley brand was founded in the 1970s, it wasn't until the '90s that the glasses became iconic. They may have made '90s cool kids look like low-budget versions of The Terminator—sorry, Justin Timberlake—but the glasses were popular enough that Oakley had brought in $230 million when the company went public in 1995.

Were they dangerous? Yes. Were they little more than a colorfully-wrapped ruler? Sure. Were they an essential piece of jewelry for any cool kid in the '90s? Most definitely. And after being banned in numerous schools, these illicit accessories only got cooler.

Following the brand's launch in 1989, Cross Colours clothing became a hot-ticket item. The brand was known for its color-blocked apparel (typically made in green, red, yellow, and black), as well as the inspirational messages affixed to its garments, like "Stop D Violence." In the '90s, they were everywhere in hip hop in particular, with rappers like Will Smith and Salt N Pepa frequently wearing the brand.

Whether worn with a sports bra (a la Britney Spears in the "Baby One More Time" video) or with a matching jacket for the full tracksuit look that dominated the '80s, this '90s trend was everywhere.

You can still find classy, lariat-style necklaces at jewelry stores today. But in the '90s, we called them "y-necklaces," and they were usually made out of metal or plastic and sold at Claire's. Extra points for layering your y's with some other necklaces.

Velvet blazers, like this one Drew Barrymore wore to a premiere in 1996, added some luxe texture for whenever cool '90s gals were feeling fancy.

The pendulum would swing the other way in the late '00s, when it was the skinner the better for denim for all genders. But in the late '90s, brands like JNCO made the widest of wide leg jeans for anyone who wanted to prove that they could walk in them without tripping.

Sarah Crow
Sarah Crow is a senior editor at Eat This, Not That!, where she focuses on celebrity news and health coverage. Read more
Filed Under
1990s • Clothing Accessories • Fashion • Nostalgia
Read This Next
Latest News
Read This Next