A decade so bright you needed Ray-Bans.

There was no such thing at subtlety in the 1980s—if you wanted to be cool, that is. Bright statement colors (and by bright, we mean neon), acid-wash jeans, Members Only jackets, and Swatch watches were the definition of totally tubular—so in order to light up a room, you literally had to light up a room. And though we certainly don't want these '80s fashion trends to return, it's always fun to look back, cringe, and say, "Gag me with a spoon." So put on your fingerless lace gloves and straighten up those shoulder pads, because it's time to relive the '80s fashion trends that defined cool.

Acid-wash denim dominated closets and clothing stores in the 1980s. It was accidentally created by Italy's Rifle jeans company when they tumbled jeans and pumice stones with bleach in a washing machine without water. And the best part was that it was possible to create this '80s fashion trend, which was particularly popular with punks, on your own. All you had to do was splatter bleach on your high-waisted jeans or overside denim jacket, and suddenly your threads looked just like the glitzy garments being sold at Bloomingdales. Jams shorts, with their bright, often Hawaiian-inspired patterns, perfectly demonstrated the loud style of the '80s. Jams were another staple of skater culture, with both men and women proudly sporting them even if they weren't anywhere near a beach. And if you want to buy someone Jams as a gag gift, you're in luck: They're one of the 30 Gifts That Prove the 1980s Were the Best.

Mostly thanks to skater Jeff Spicoli (Sean Penn) in Fast Times at Ridgemont High, checkered Vans sneakers were everywhere in the 1980s. Nothing seemed to quite embody the spirit of California cool like Vans did, and still do to this day.

Today, Croakies would probably be considered unfashionable. But in the 1980s, everyone was sporting these sunglasses straps. Actually, you can still shop the Croakies 40th-anniversary collection today (like the pair above) at croakies.com. We have to admit, it's a great way to ensure you don't loose your Wayfarers.

There was no better way to look professional in the 1980s than with a blazer with massive shoulder pads. Truly, bigger was better when it came to this '80s fashion trend, which Andie Walsh (Molly Ringwald) embodied in Pretty in Pink. If it looked like your boyfriend or husband loaned it to you, you knew you'd found the perfect blazer.

Even if you didn't grow up during the 1980s, you're likely familiar with the Members Only jacket, thanks to the hit Netflix series Stranger Things. They were a signature '80s fashion trend and were famous for their advertising campaigns, some of which were odd PSAs and others of which featured celebrities like David Hasselhoff.

Just like everything else, accessories only got bigger and bolder in the 1980s. Gold chains became hugely popular during this era, thanks to Mr. T wearing a breastplate of chains on the hit show The A Team. Soon enough, numerous rappers, like members of The Sugarhill Gang, adopted the style.

Though Sperrys first launched in the 1930s, they didn't have their moment until the 1980s, when the preppy look took over the runways and subsequently street style as well. When it came to '80s fashion trends, Ivy League style ruled, and so Sperry Top-Siders were the only acceptable footwear to accompany your khakis and the Shetland sweater tied around your neck.

With the rise of the aerobics craze, leggings became a fashion staple in the 1980s. As Jane Fonda perfectly demonstrates here, they were often worn under a high-cut leotard (ideally in neon, of course).

If you weren't covered in neon in the 1980s, then what exactly were you wearing? In the '80s, you could see someone coming from a mile away. (At least nighttime bicycle riding wasn't a problem!) With its neon leg warmers and off-the-shoulder sweatshirts, this decade glowed brighter than the rest.

Could you even consider yourself trendy if you weren't decked out in animal prints in the '80s? Cheetah, giraffe, and even zebra-print garments were about as common during the Reagan era as "Just Say No" memorabilia.

But this wild style (worn by Suzanne Somers here) wasn't for women alone. Animal print was popular in menswear, too; even the members of Mötley Crüe got in on the trend.

If you lived you through the '80s or are a film aficionado, you can probably still picture Tom Cruise strutting around in his Ray-Ban Wayfarers in Risky Business. From the moment the movie was released in 1983, anyone who aspired to reach Cruise's level of cool—including Corey Feldman here—had to have a pair.

The 1980s saw the birth of hip-hop culture, and along with it came a style that would define a generation. Bally sneakers, which '80s rappers like Rakim and Slick Rick were particular fans of, were considered the ultimate status symbol throughout the decade. (The shoes stoke so much '80s nostalgia that you can still buy them now, for $425 on bally.com).

Lace was everywhere in the 1980s—mostly thanks to Madonna's influence on stage, in her music videos, and in 1985's Desperately Seeking Susan (pictured here). From gloves and headbands to sheer tops and leggings, anything could be—and was—made of lace in the 1980s.

Founded by Swiss watchmaker Nicolas Hayek in 1983, Swatch watches were one of the biggest '80s fashion trends. During the decade, the brightly colored timepieces adorned the wrists of cool kids everywhere. And since they were also pretty affordable—the watches sold for about $50 each—it became fashionable to wear more than one on each arm. In fact, the more Swatches you piled on, the better.

In the 1980s, Disney was more than just a popular theme park—it was also a trademark style. After John Lennon proudly wore a Mickey Mouse ringer tee in the decade prior, it wasn't long before vintage-inspired Disney shirts and sweatshirts were everywhere.

Any cool '80s kid knew there was a single acceptable piece of headwear: the Kangol hat. Whether you went for a beret or the bucket hat, the English brand, with its distinctive kangaroo logo, took the States by storm in the '80s. Soon enough, Kangol became a hallmark of hip-hop style, as you can see from LL Cool J's 1987 "I Need Love" music video.

The stylish set of the 1980s rebelled agains the low-rise pants of the '70s with super high-waisted ones instead. As modeled by Freddie Mercury here, they were functional, comfortable, and looked great paired with a "Choose Life" tee.

Plus, thanks to those big back pockets, high-waisted jeans could hold a cell phone the size of a brick, which is about how big they were at the time.

In the 1980s, tracksuits transcended workout wear and became an everyday fashion staple for the coolest kids on the block, namely thanks to The Beastie Boys and LL Cool J. The tracksuits of the '80s, like those made by Adidas, came in a wide assortment of colors, patterns, and fabrics. If you wanted a neon nylon set, Surf Style had you covered. But if you wanted a suave velour version, Fila was probably your go-to.

If there's one thing Americans love, it's Coca-Cola. And in the 1980s, we didn't just love to drink Coke—we loved to wear it, too. Branded Coca-Cola merchandise was a huge '80s fashion trend, and the most iconic item was the rugby shirt. Designer Tommy Hilfiger created these relics, which featured Coca-Cola's famous cursive letters and bright red hue.

Whether you were Prince, Liberace, or Nancy Reagan, ruffled (or "puffy") shirts were the look of 1980s royalty. Sure, they were a little loud and gaudy, but that's what the 1980s were all about.

Oversized Cazal glasses were a paragon of '80s fashion. Created by Australian designer and visionary Cari Zalloni, these bold specs were incredibly popular and had celebrity fans like Run DMC and Spike Lee.

Unlike the A-line miniskirts of the 1960s, the '80s skirt styles were tighter, shorter, brighter, and more likely to be covered in acid-washed ruffles. 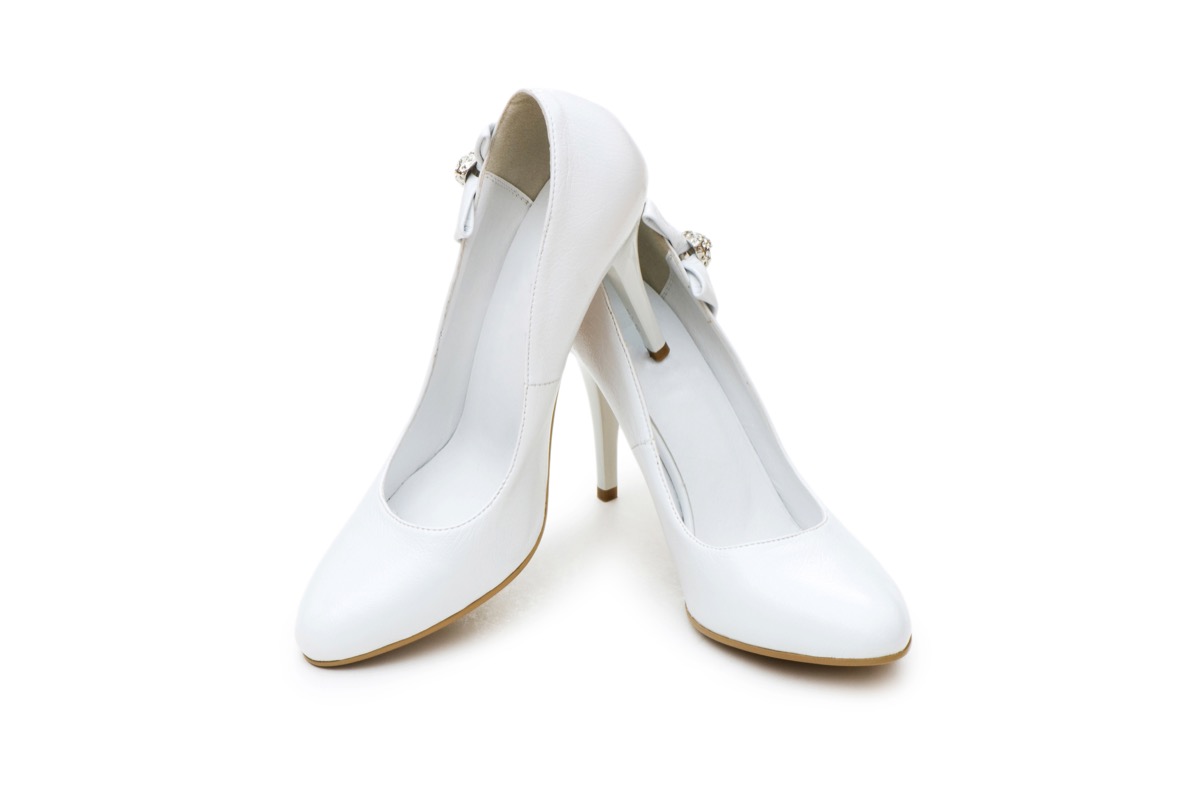 If you were a bridesmaid in the 1980s, you probably also owned a pair of white satin pumps. While other colors, especially neon shades, were popular in the 1980s, white was iconic. "The white stiletto once stood for style that was bold, brash and sexy," a fashion writer from The Guardian explained.

After Back to the Future came out in 1985, every guy wanted a puffy vest so he could be more like Michael J. Fox's Marty McFly. And, just like you didn't have to be at the beach to wear Jams, it didn't have to be cold to sport this wintertime look. And if you can't get enough '80s fashion, check out these 20 Photos Only Kids Who Grew Up in the 1980s Will Understand.

Ashley Moor
Ashley hails from Dayton, Ohio, and has more than six years of experience in print and digital media. Read more
Filed Under
1980s • Entertainment • Fashion • Nostalgia
Read This Next
Latest News
Read This Next