Will the "foodie" from California indulge in jellied eels or spotted dick?

Britain is known for a lot of things, but great food isn't one of them. For a California girl and self-described foodie like Meghan Markle, national delicacies like "spotted dick" and "toad in the hole" could be pretty tough to stomach. (No wonder Kate Middleton is so thin.) Here's the rundown on some of the weirdest and oddly named foods Meghan is likely to come across as she embarks on her six-month-long "getting to know you" tour around the country with Prince Harry. (Don't forget your Tums!) And for more great coverage of the royal family, here 9 Rules Meghan Markle Needs to Know Before Her First Royal Christmas. Haggis is made by mixing sheep's heart, liver, and lungs with oatmeal and onions. The Scottish dish was traditionally cooked in the animal's stomach, but we've been assured that's no longer the case. These days, it's made in sausage casing. Fans of the "delicacy" say it tastes like a peppery meatloaf. 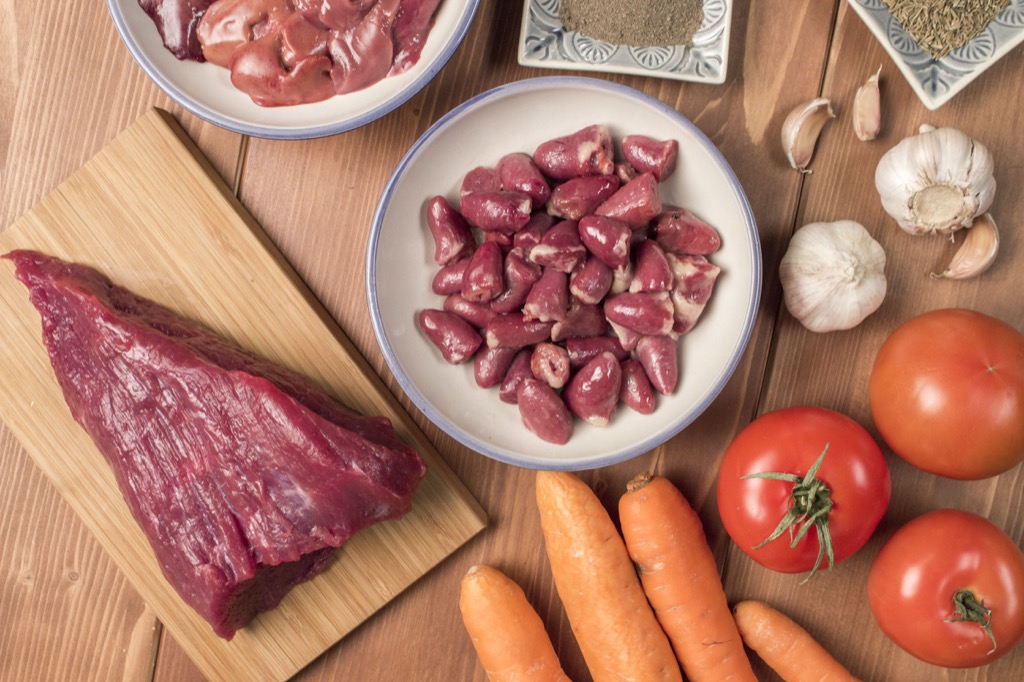 Animal organs are used in many classic British dishes, like steak and kidney pudding, which is made with diced beef, lamb's or pig's kidneys, and suet (waxy fat of beef or mutton) pastry. Thanks, but we'll just have a salad. The absolutely wretched name notwithstanding, this is a popular dish of sponge pudding made with suet (the Brits love their suet!) and dried fruit, and served with custard. Mummy and Daddy likely ate a lot of this at boarding school. 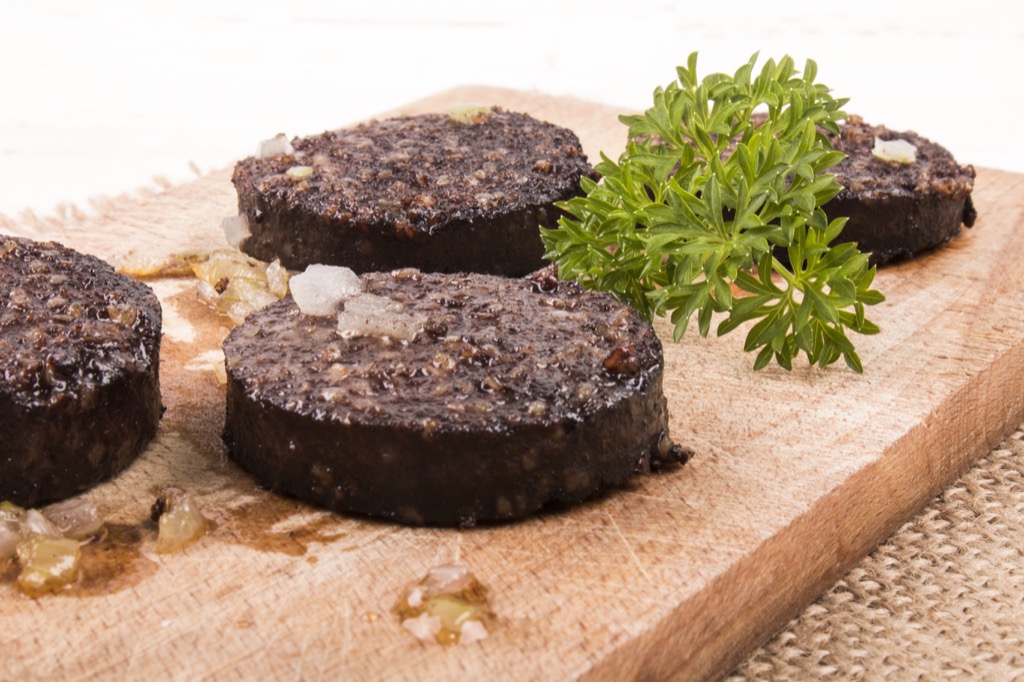 Actually a blood sausage that was born out of the tradition of butchers combining every last scrap of different butchered animals to make food. Despite its humble beginnings, it is a breakfast staple in the UK and Ireland, where it is served with toast. Just the thing if you're having a family of vampires over for brunch. 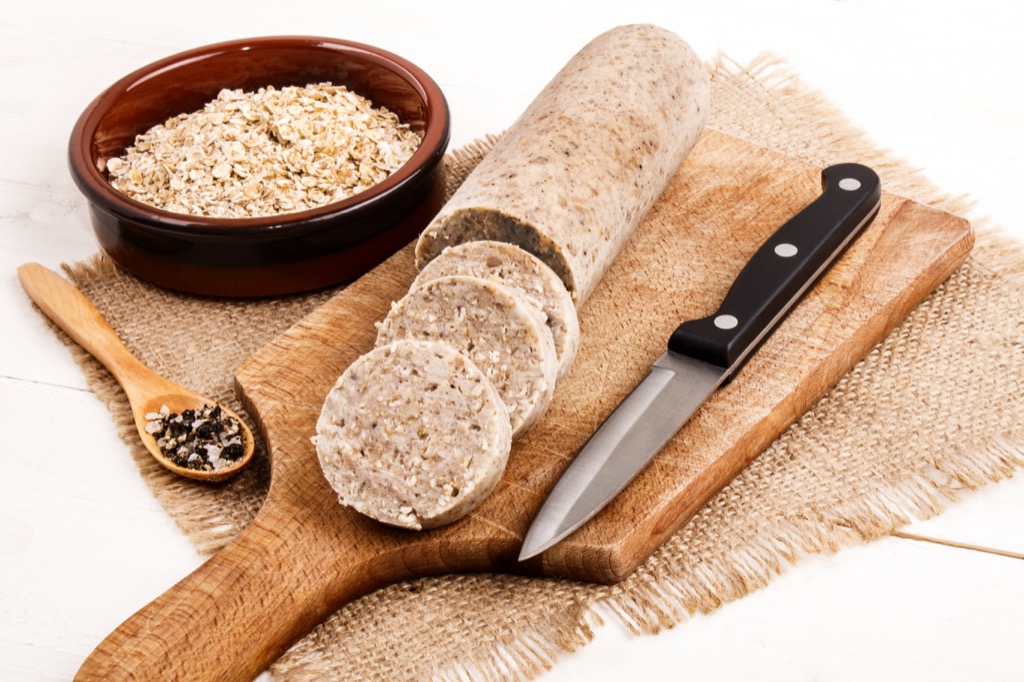 Also a sausage, but is made using pork fat instead of blood. 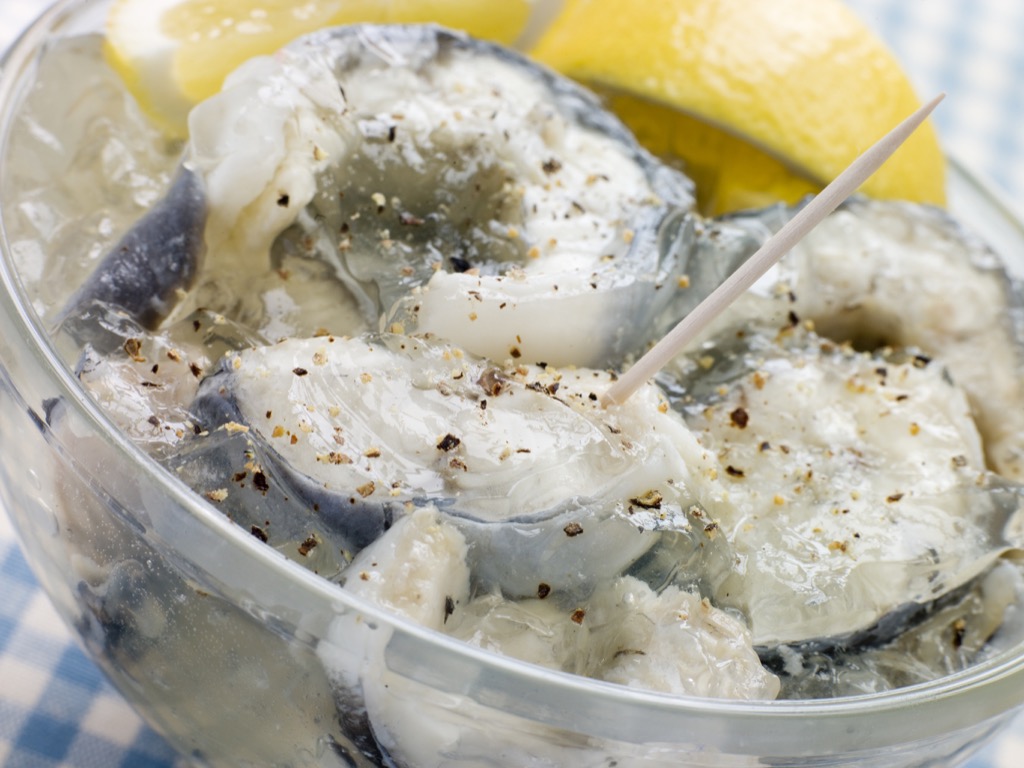 A favorite among Londoners, but the dish isn't very popular outside of the UK. We can't imagine why.

7
Toad in the hole 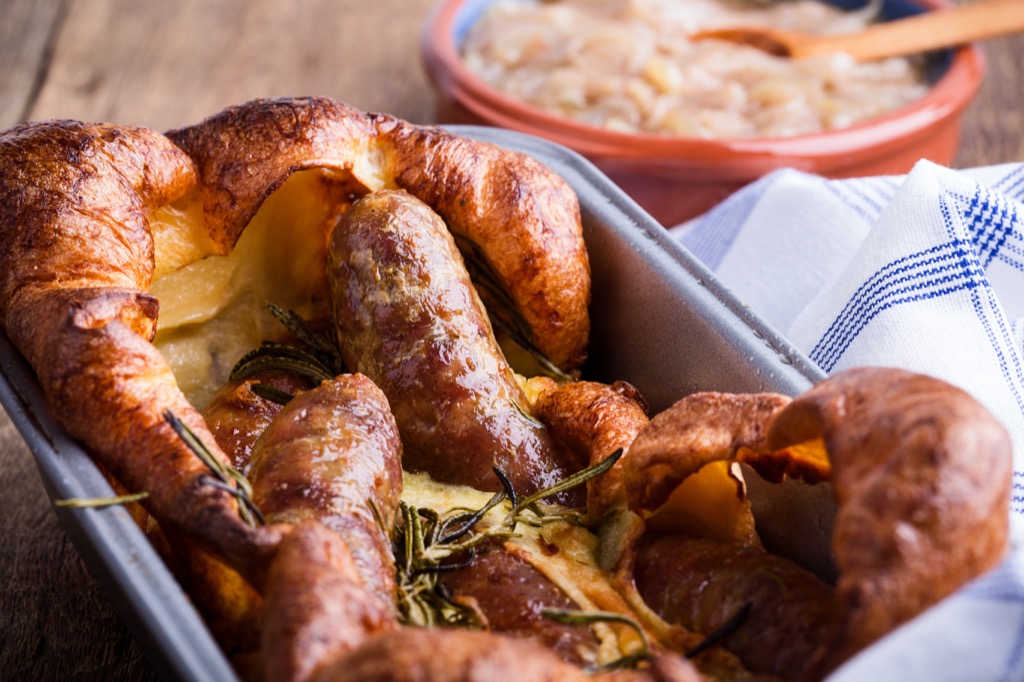 Toad in the hole refers to sausages baked into a Yorkshire pudding batter. Brits love it covered in gray. 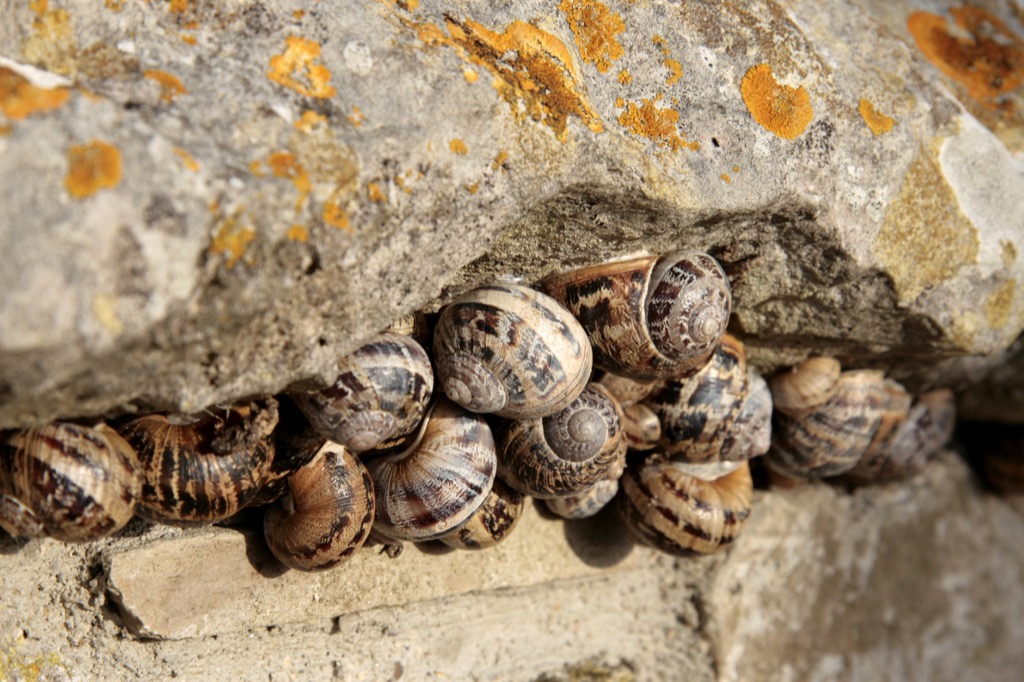 These are small sea snails also known as "winkles" that are a favorite in the coastal areas of the UK. 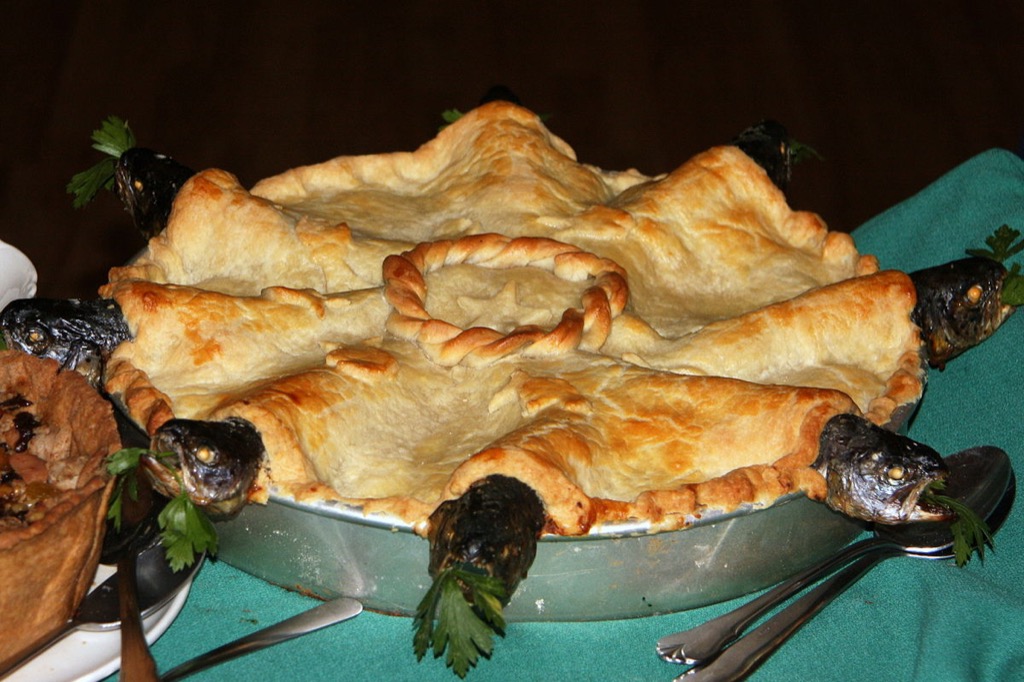 A terrifying looking dish that is made with baked pilchards (a type of fish), eggs, and potatoes as filling. This Cornish "delicacy" gets its name for the way the fish heads are baked into the pie so they are jutting out of the crust so as to 'gaze' up at diners. We kid you not. 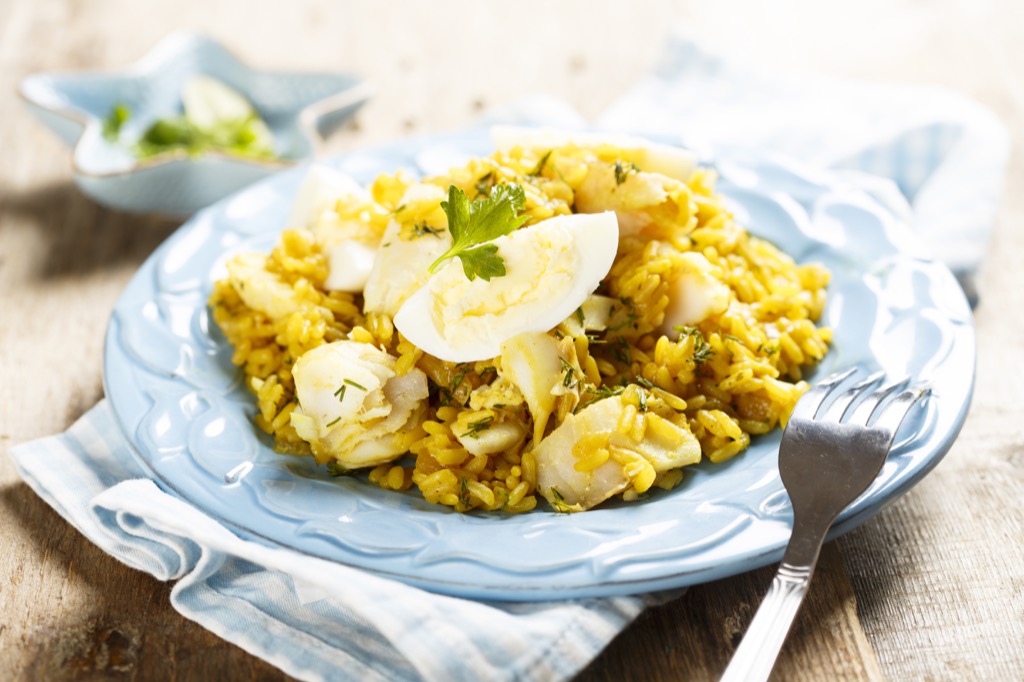 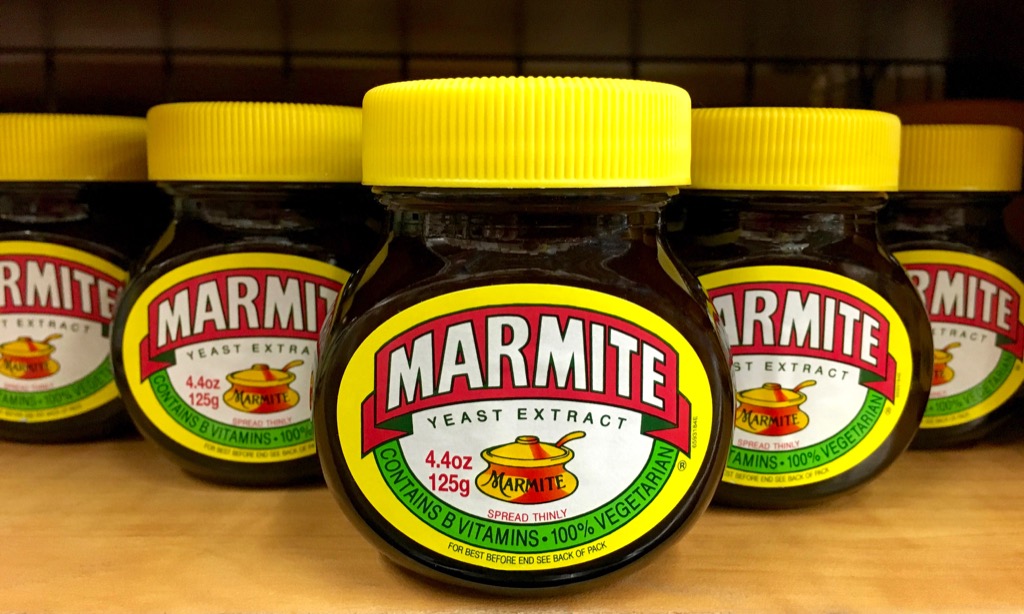 A salty paste made from brewers' yeast extract that's usually spread on toast. Brits either love it or hate it. We know what camp we'd join if asked. 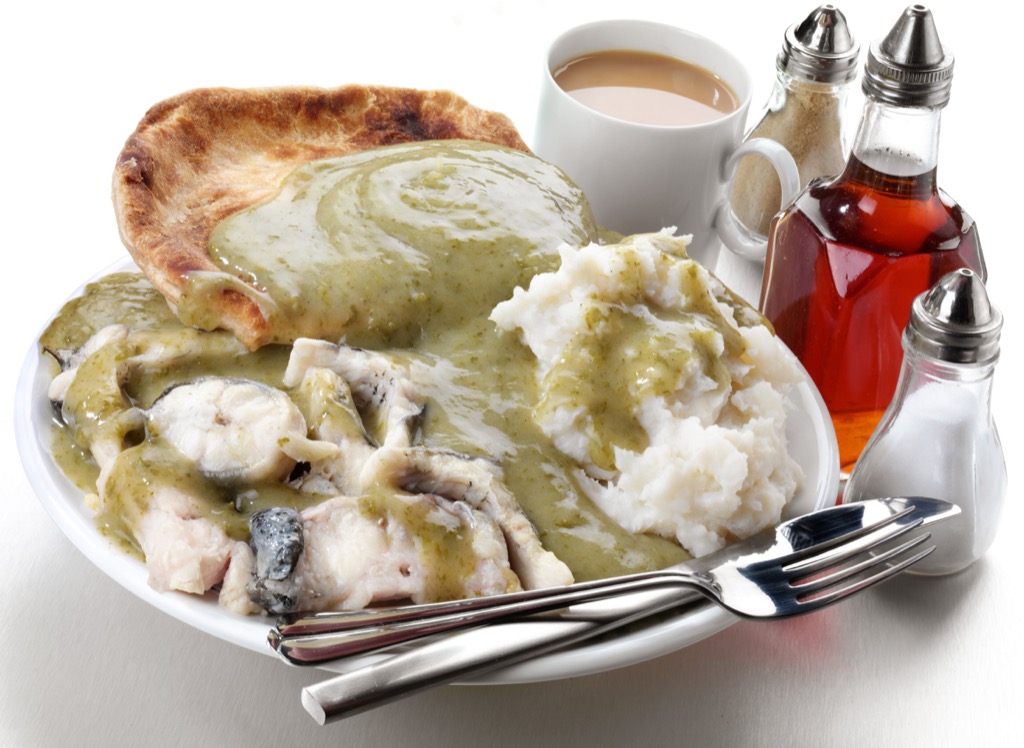 This is a sauce made with parsley and vinegar and is the classic accompaniment to pie and mash (meat pie with mashed potatoes), which originated in East London in the 19th century and is still popular today. Smoked fish served with brown bread and a lemon wedge for breakfast. We'll stick to Cheerios. 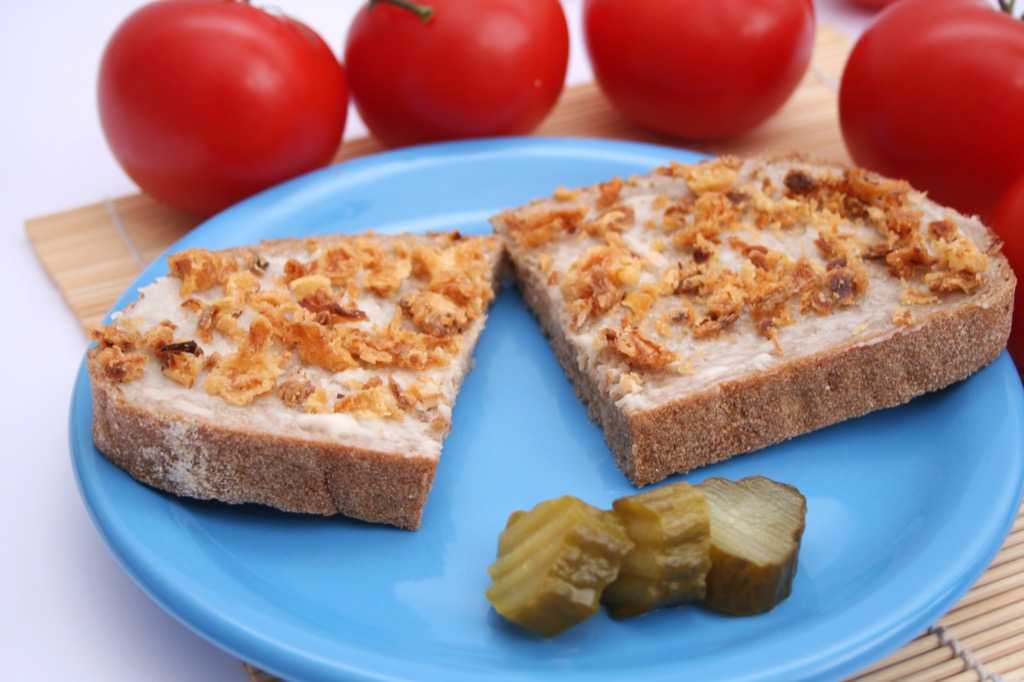 Dripping is the fat from roasting a side of beef or pork and is used as oil in cooking or—yum—served straight up on toast.

Mucky dripping is gravy made from whatever is left in the roasting pan and can be spread on pretty much anything. A favorite of cardiac surgeons everywhere. 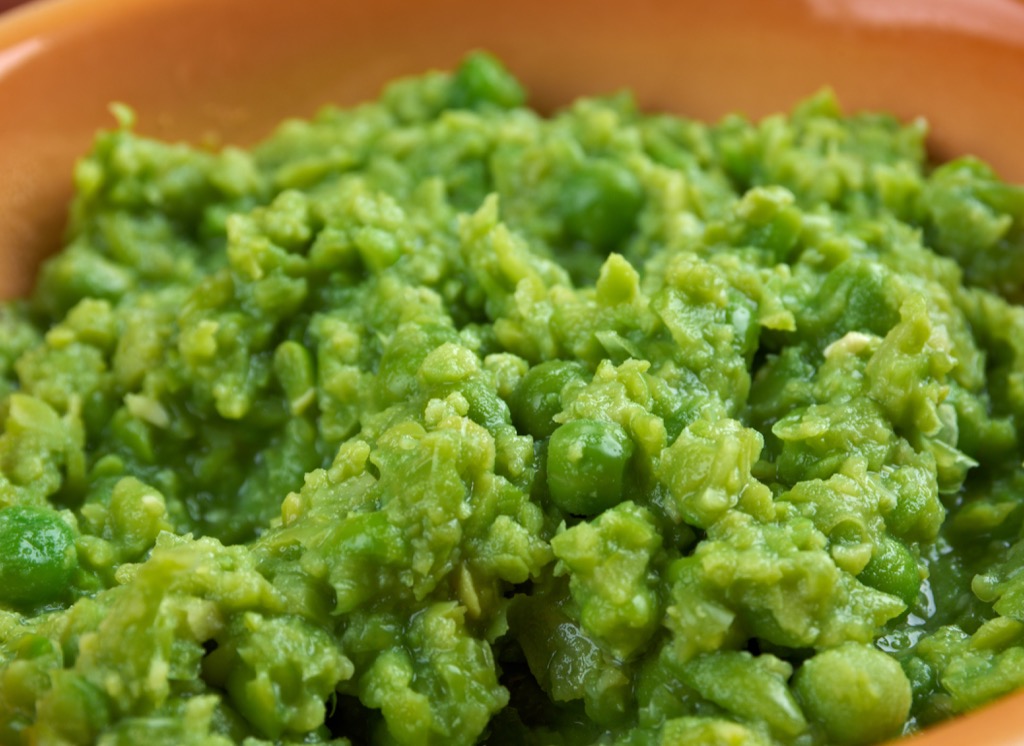 These are peas that have been soaked overnight, then boiled with sugar and salt, to form a green mush. It's the side dish usually served with fish and chips. One of the only things on this list we've actually tried and liked. 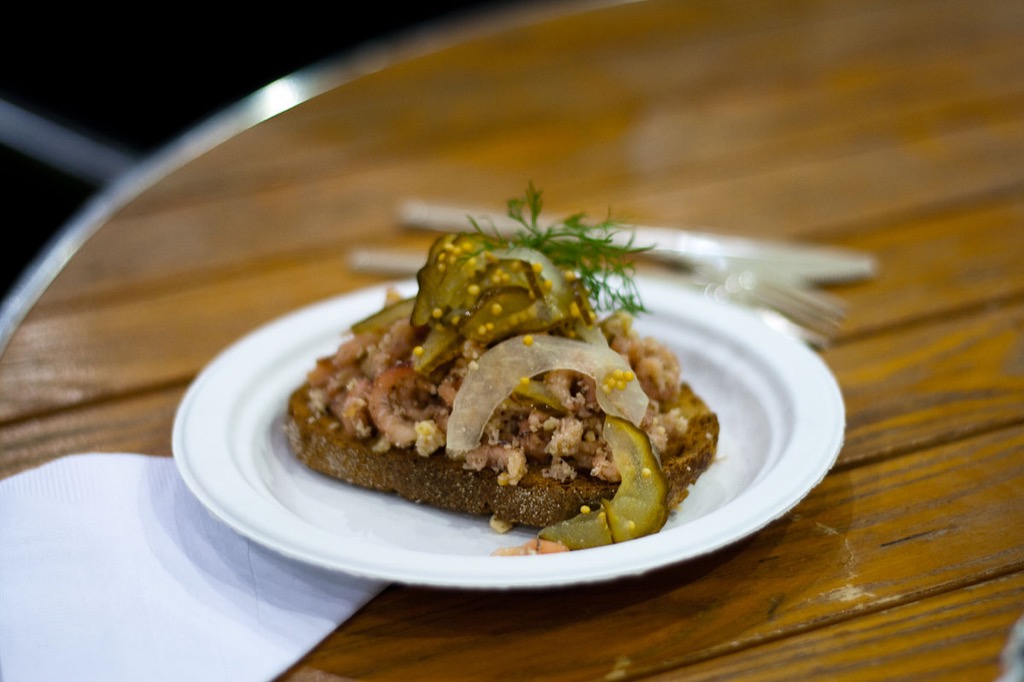 Potted shrimps are brown shrimp soaked in a nutmeg-flavored butter and stored in a glass jar. Usually served on whole wheat toast, they're popular at some of the UK's swankiest eateries. 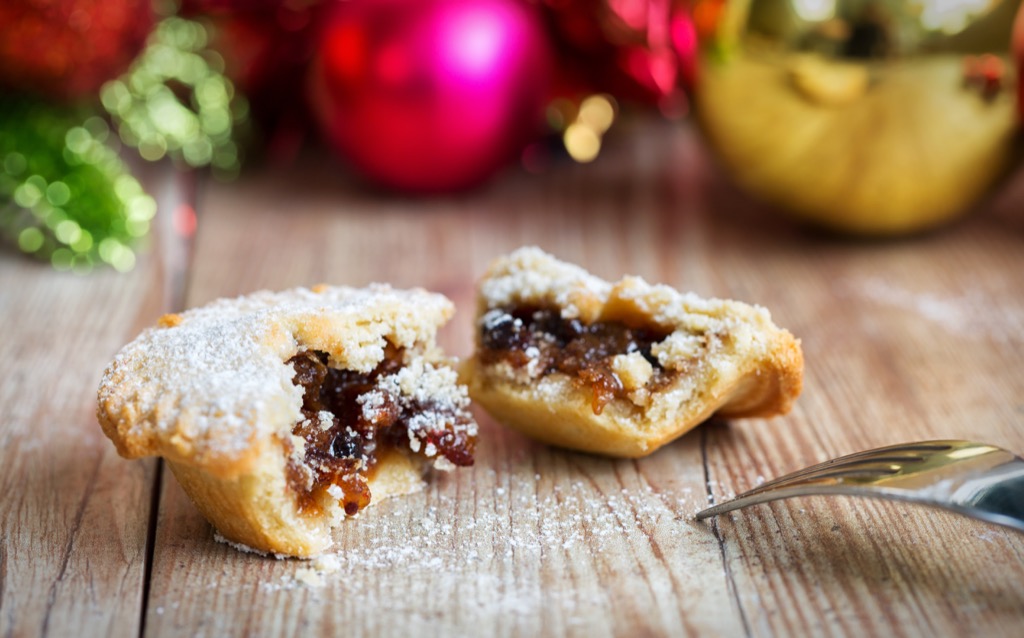 Mince pies are made with "mincemeat" (a mix of dried fruit, peel, and suet), and are baked with spices and served as a Christmas dessert. Tastes better than it sounds. 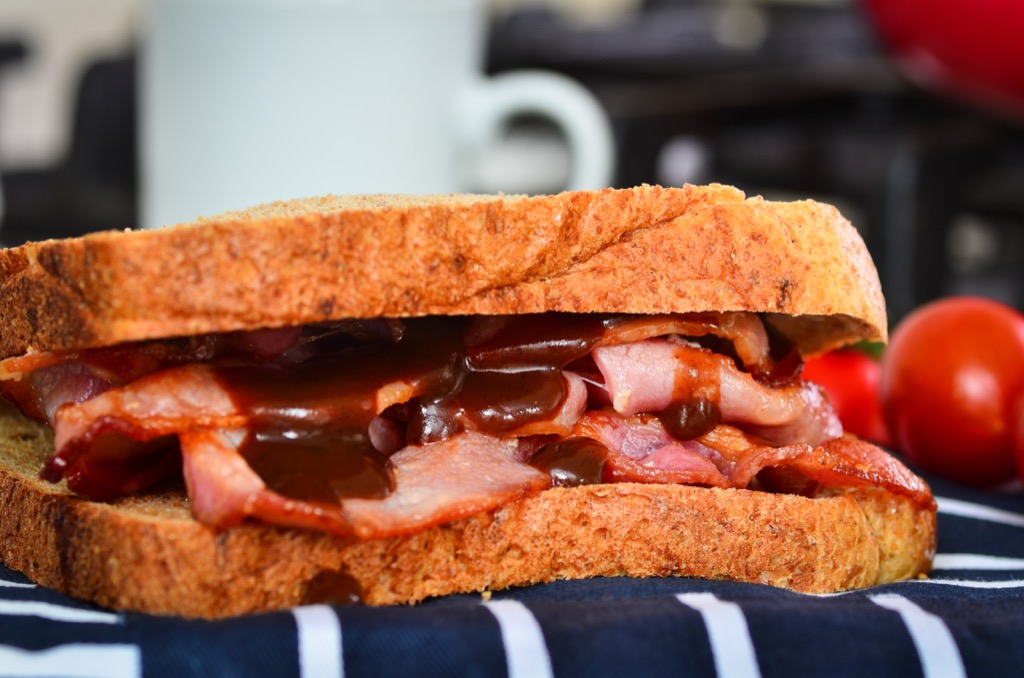 Brown sauce pretty much goes on everything from bacon sandwiches to breakfasts and has for centuries. It is made with malt vinegar, tomatoes, dates, tamarind extract, and spices. 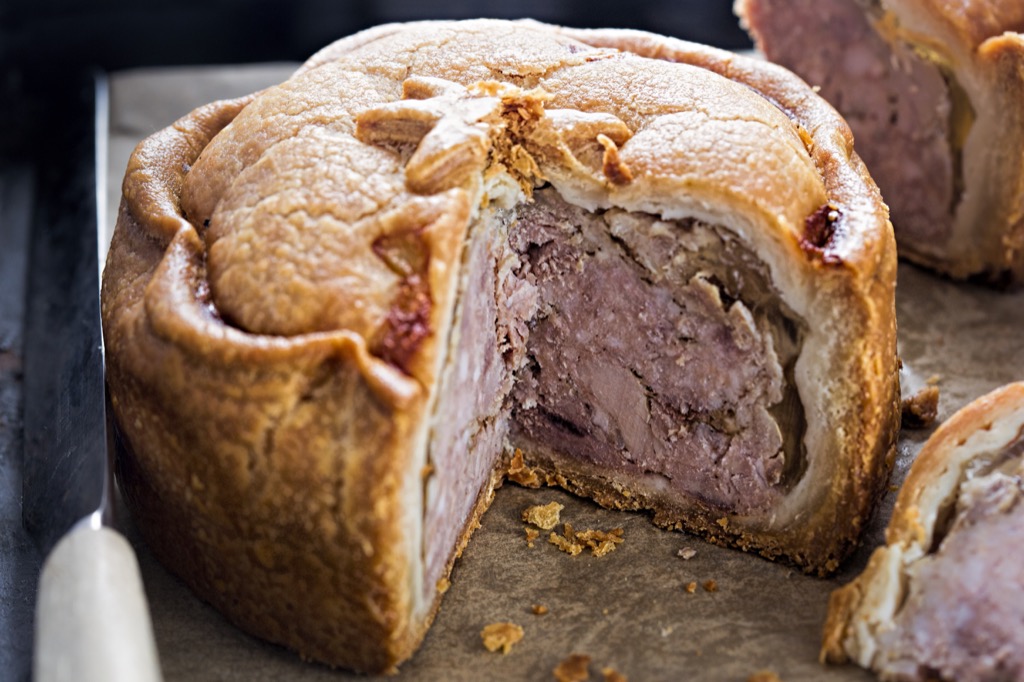 Pork pies are made from chopped pork coated in pork jelly (we gagged from just typing that), before being wrapped in a pastry and baked. 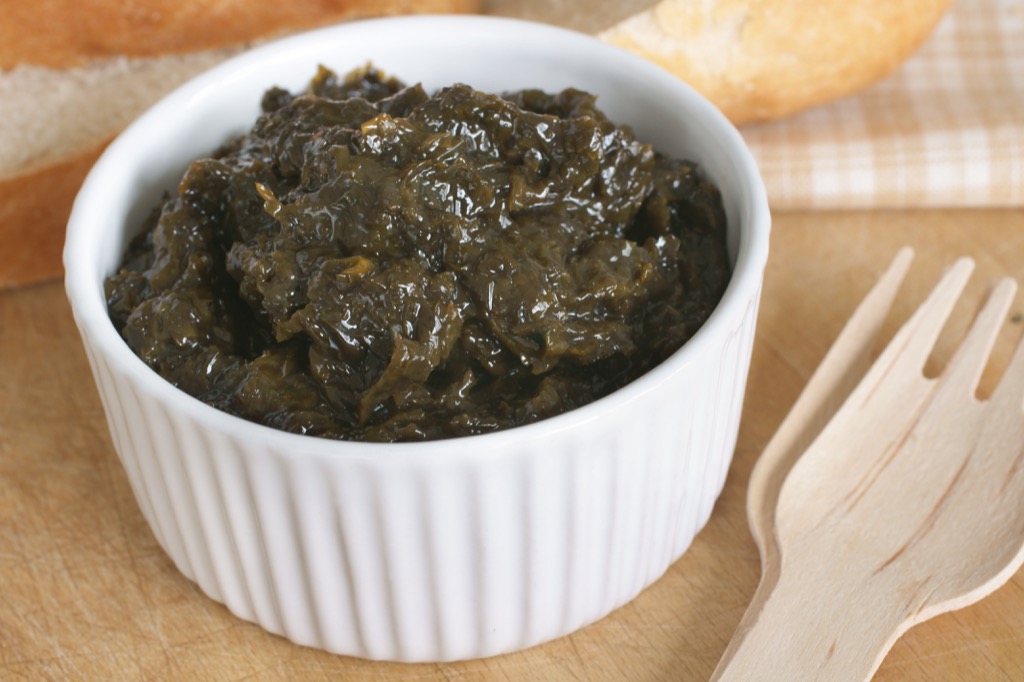 Laverbread is considered a Welsh delicacy and is made from edible seaweed that has been boiled for several hours before being minced and puréed. 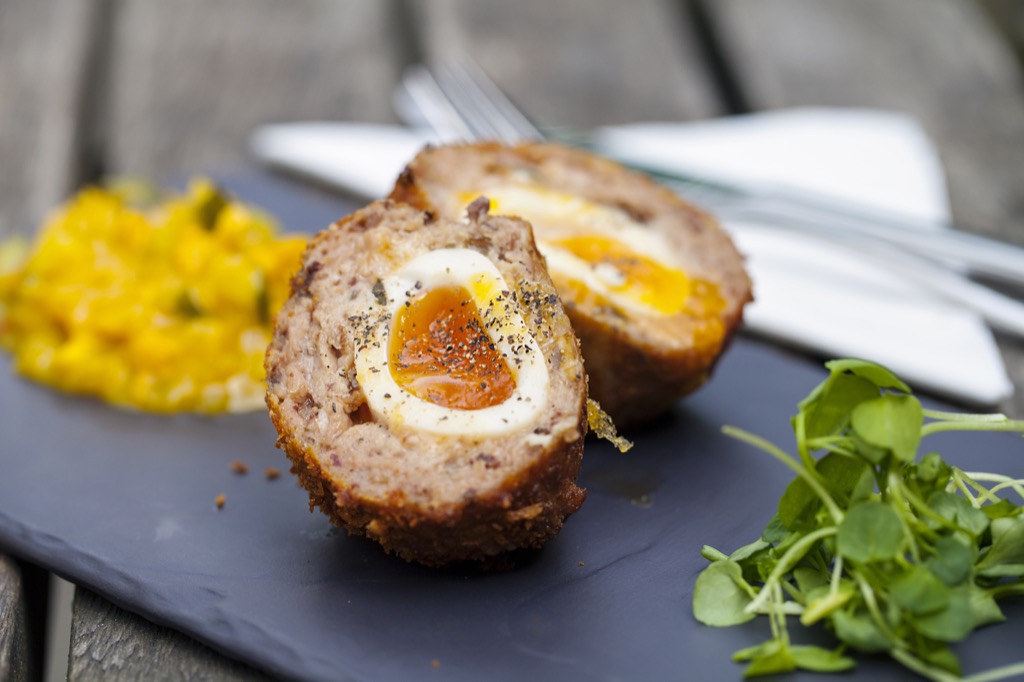 These are standard pub fare and consist of a hard-boiled egg encased in sausage meat rolled in breadcrumbs and usually deep fried. Otherwise known as a heart attack on a plate.

Rumbledethumps sounds like the name of a character in Harry Potter, but it's actually a casserole made from leftover cabbage with lots of butter slathered in cheese. It's the Scottish variation on the British favorite, Bubble and Squeak, which is made with fried leftover vegetables. 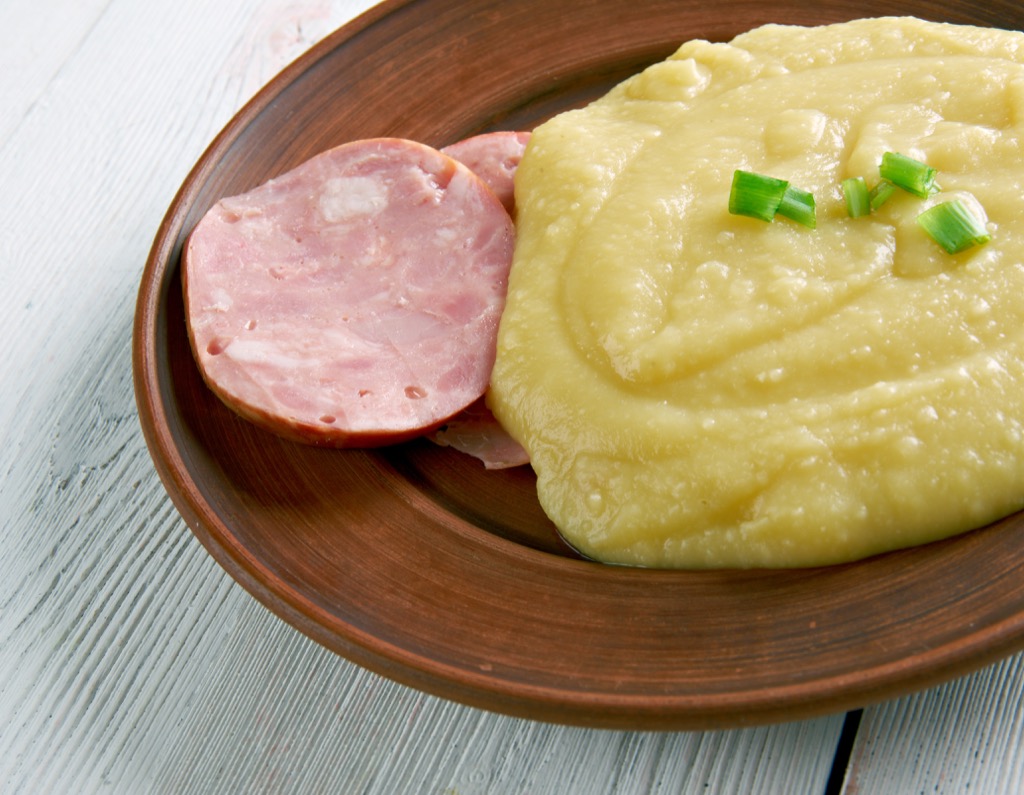 Pease pudding is made using lentils or split peas that have been boiled and puréed. No one outside of the UK ever eats this. No one. 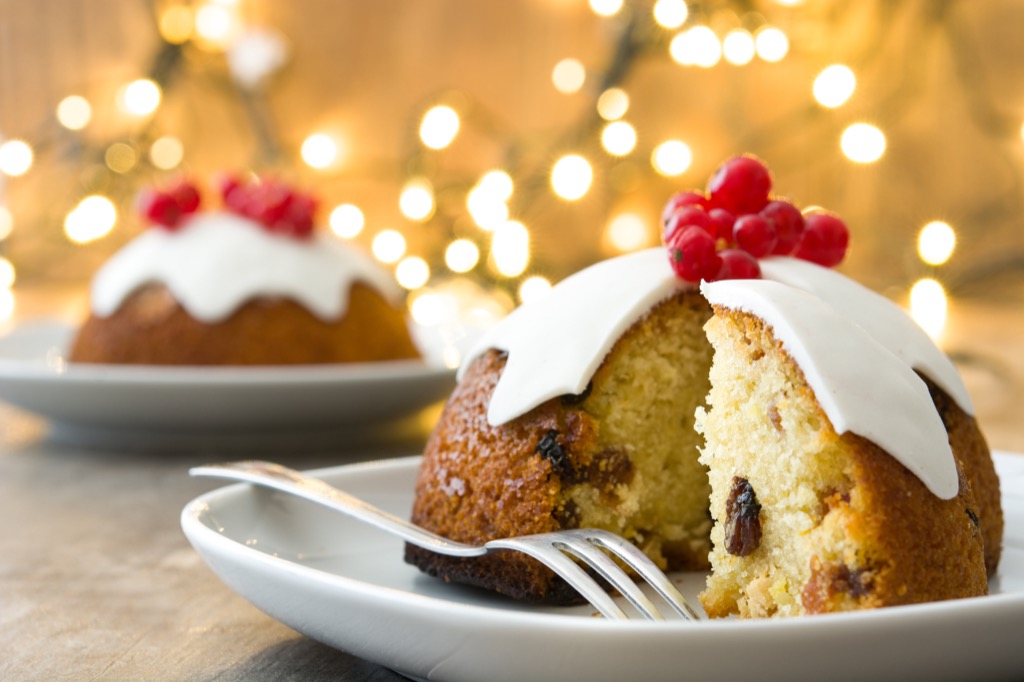 A staple of dessert time made from fried fruit, nuts, suet, and lots of brandy that's often set on fire right before serving. In all honesty, it's not that bad. Must be all that brandy.