40 Pets That Are Living the Good Life

More often than not, we're guilty of treating our furry friends to more luxuries than their small pet brains can probably process. We buy them organic treats, adorn them in chic booties and matching faux-fur-lined jackets, construct fancy miniaturized palaces—and that's just the tip of the iceberg.

But while most pet owners do this happily for our four-legged best friends, there are whole online communities dedicated to showing off the wealthiest pets in the world—with owners among the rich and famous elite, keen to distribute their wealth to their most adored family members.

From pups jetting off to exotic locations on their parents' personal jets to a famous cat with more maids doting on her needs than her owner's, these are the pets living their absolute best lives. And for more adorable (and equally pampered) pets, meet the 20 Craziest Pets People Actually Own. 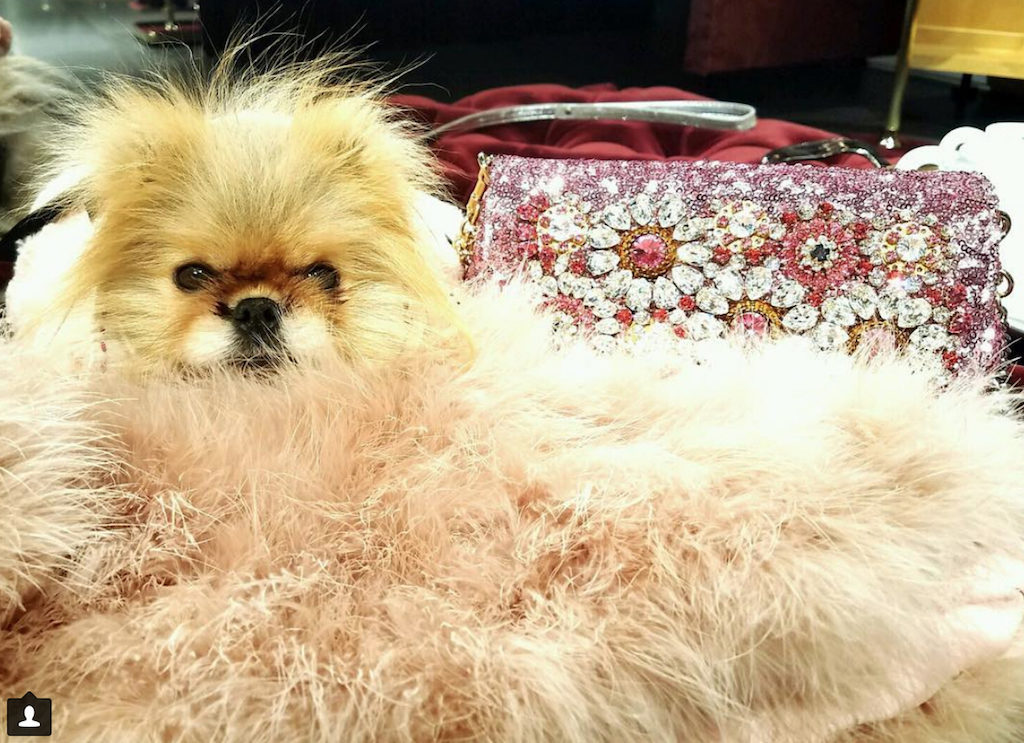 The British restaurateur and reality star Lisa Vanderpump is known for her love of man's best friend, and this affection is only further emphasized by the riches she bestows upon her pup, Giggy, who seems to have an affinity for jewels and faux fur—and once even met Donald Trump on the Red Carpet. And for ways to keep your dog healthy in the summer, check out these 5 Genius Ways to Keep Your Dog Cool This Summer.

Billionaire media mogul Oprah Winfrey, though alive and well, has reportedly set aside a $30 million trust fund for her "fur children"—golden retrievers Luke and Layla, cocker spaniel Sadie, and springer spaniels Sunny and Lauren. And for more celebrities and their favorite furry friends, check out these 20 Celebrities Who Look Like Their Pets.

If you know at least one thing about heiress Paris Hilton, it's that her pups—especially Princess Paris Jr. here—are always afforded life's best luxuries. From strutting around their two-story mini dog mansion to lounging on velvet couches for photoshoots with their owner, these pups are the luckiest pets in the world.

Fashion designer Karl Lagerfeld has become an inspiration to her owner, reportedly inspiring many collections that he has created for Chanel. Lagerfeld calls watching after Choupette a "full-time job," and sets aside a miniature army of maids to look after the cat every day. And for more ways to decode your cat's every move, check out these 25 Hidden Ways Your Cat Shows Affection.

Since 2013, Squiddly and Diddly, named after the anthropomorphic animated squid created by Hanna-Barbera, have been the faithful companions of Simon Cowell, and accompany him every year on trips to the south of France and Barbados every year—of course, on their owner's own private jet.

Without a doubt, Finn, actress Amanda Seyfried's furry friend, is the among the most spoiled pets in the entire world—mostly just by the sheer fact that his owner treats him like an extension of herself. Finn has seen following along on his mom's globe-trotting journeys, and has even appearing in several editorials for glossy fashion mags, like Vogue and Allure. 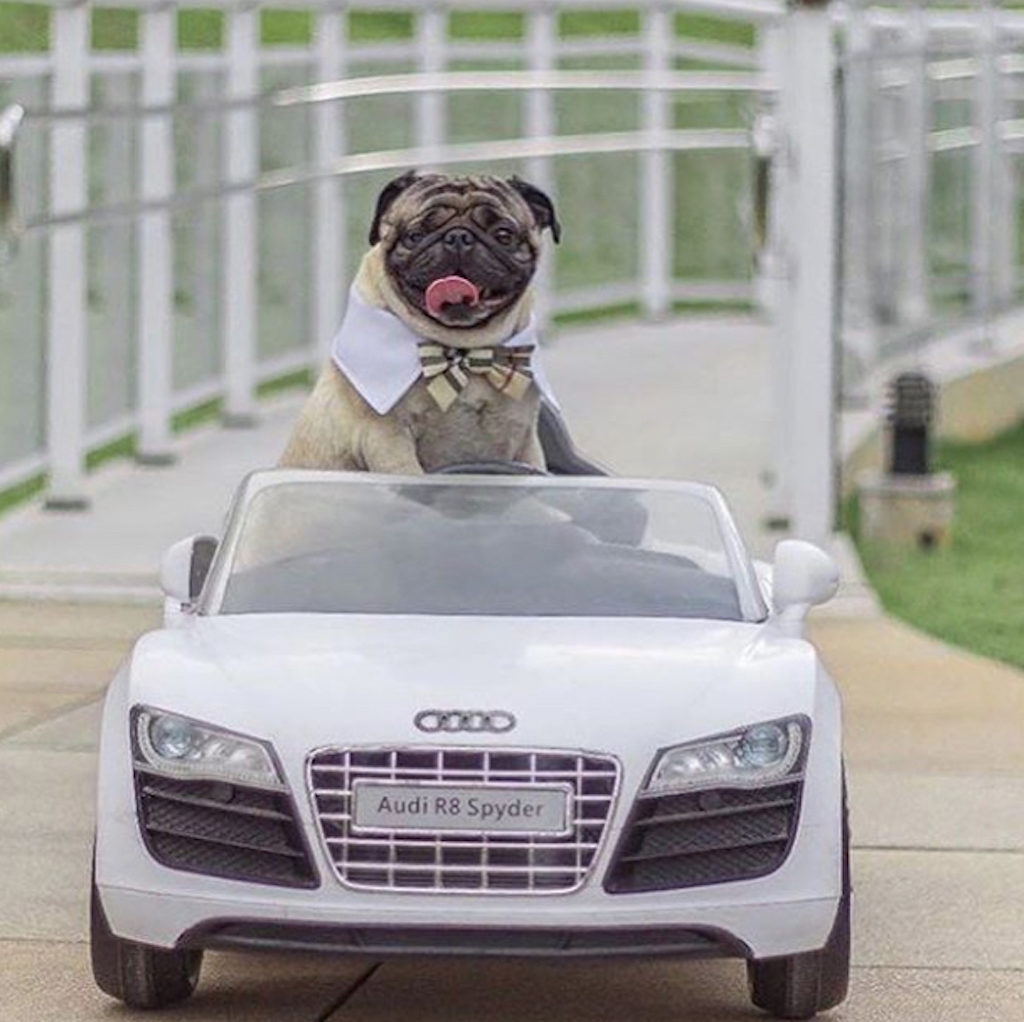 J.J. the golden retriever lives the good life in Florida and is truly a member of the family, regularly going on shopping trips and luxurious vacations with his parents. When he's not enjoying his fair share of luxury, J.J. enjoys participating in photo shoots—often next to high-end wares—and long swims in the pool.

Mini Pita takes comfort in life's simple luxuries—like partaking in glamorous vacations and shopping hauls. No word on which of the Fifth Avenue retails is her favorite (though Jimmy Choo, Valentino, and Prada are all in the running).

At one time, Nala had more Instagram fans than Queen B (that would be Beyonce) herself, attracting millions of fans tuning in to catch her latest adventures. She enjoys modeling for her owner and wearing her personalized, jewel-studded tiara.

With nearly 2 million diehard followers entranced by his overwhelming cuteness on Instagram (due in part to his famed overbite), Tuna's travels all around the world rival even those professional travelers. In this picture, Tuna is posing in front of the Painted Rocks in Arizona.

Lil Bub is another world-famous Instagram cat, and regularly revels in the luxuries that this life affords—like a large birthday celebration. You can even purchase a t-shirt with Lil Bub's face on it, and the proceeds go various pet charities.

A quick scroll through Loki the Wolfdog's Instagram account will make any human (and pet) instantly envious of the travels pictured. From kayaking down beautiful rivers to lounging casually on the side of sweeping mountain vistas, this dog is well-traveled and pampered by his owners.

The pet of famed fashion designer Marc Jacobs, Neville Jacobs is just as well-dressed and chic as his parent—unless he's taking time to relax by the designer's beach house. The pup even had a book published about his globe-trotting adventures: Neville Jacobs: I'm Marc's Dog.

Miss Asia, the original spoiled empress living with her owner, Lady GaGa, has her own Versace bed and extensive wardrobe—and sometimes even walks the Red Carpet with her parent.

The world's most famous French Bulldog, Manny, enjoys all of the luxuries that his human parents indulge in—pizza, fries, and the occasional ride in his personalized Audi.

Formerly occupying our country's most famous residence with his parents, Barack and Michelle Obama, Bo, a Portuguese water dog, often accompanied his dad into the Oval Office, and, at one point, even had his official photograph and biography listed on the White House website. 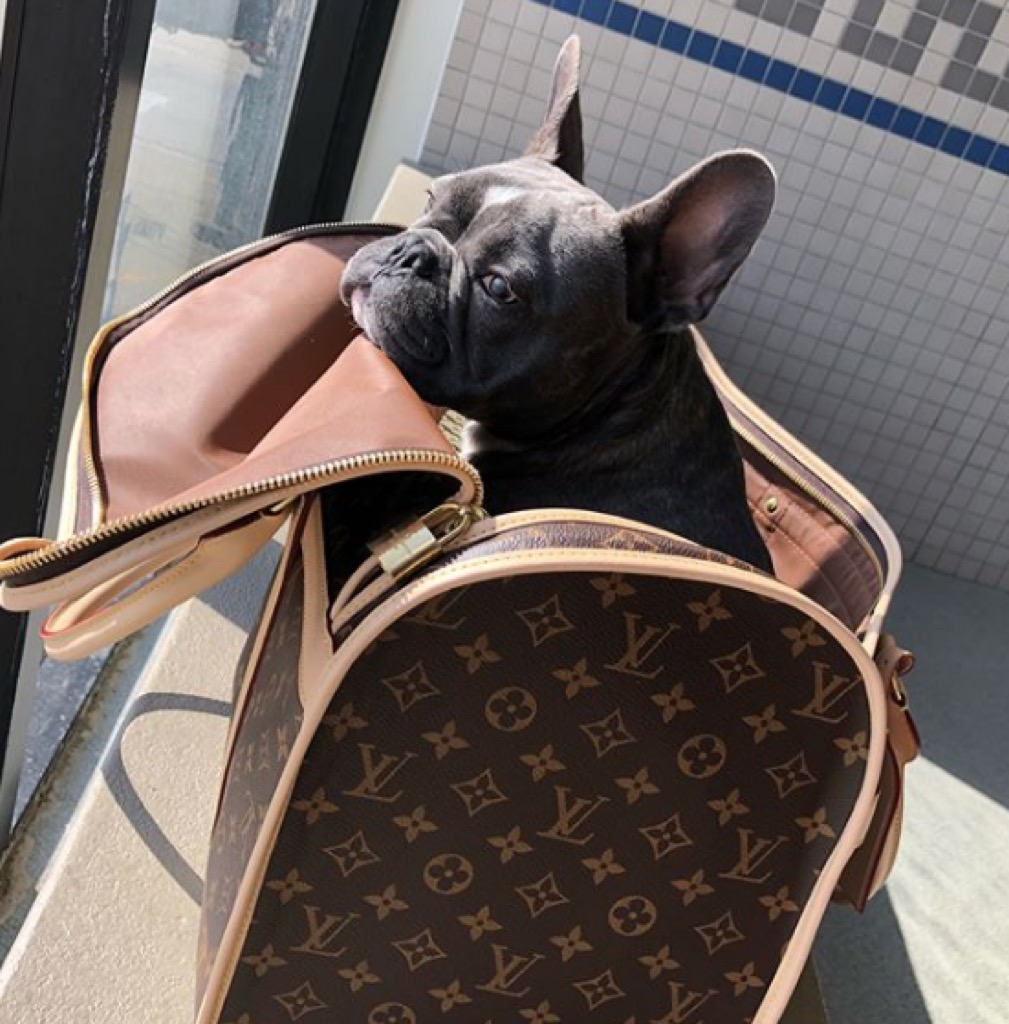 Boujee, the lucky canine companion to Pittsburgh Steelers wide receiver JuJu Smith-Schuster, enjoys trips outside in his Louis Vuitton bag and frequent visits to In-N-Out—an establishment some could (credibly) argue is the ultimate luxury.

Trappy is the famous pet and (expensive) confidante of rapper 2 Chainz, often escorting the musician on his tour across the globe, with a window seat on this personal jet. According to the rapper, he spent $100,000 on the dog and often spends equally luxurious amounts of money to keep the pup happy—including a $15,000 birthday cake.

Samson the Goldendoodle takes a break from his stressful life as an Instagram star to take a much-needed spa day. Aside from cuddling next to life-size teddy bears, Samson is known to enjoy the occasional glass of rose.

Venice has gone through more hair transformations than Britney Spears, though we have to humbly admit that our favorite is her pink coat, which complements her shiny tiara quite nicely.

Actress Jessica Chastain's three-legged rescue pooch, Chap, follows her everywhere—including once right onto the stage, during one of Chastain's Broadway performances of The Heiress.

Ella Bean, aside from enjoying the occasional day at the beach, also loves tall ice cream cones and macaroons. If her travels and long soaks in the tub don't make you green with envy, then you haven't seen her edible succulent cupcake.

Beauregard enjoys his world travels and walks in a personalized stroller. And when a day of hiking ends up being too much for his sleepy pooch self, he has his own personal tent to take a quick snooze in.

Casper the Goldie, with over seven thousand followers on Instagram, loves playing with his room full of toys and sipping expensive champagne right from the bottle.

Prince Jean Jacques, an expensive and rare Turkish Angora breed (often coming in at around $1,000), lounges comfortably by his Louis Vuitton trove—and believe us when we say there's more where that came from.

Without a doubt the most sophisticated puggle on the internet, Lord Otis is often treated to meals whipped up by his butler (known to us humans as his parent), along with personalized outfits for every occasion. For snowy days, he even has a bespoke pair of snowshoes.

Described as 2.8 pounds of love, Jazzy the Yorkie is spoiled daily with cuddles—oh, and regular trips to Chanel (and personalized Barbie tutus for Easter).

Empathy the Sphynx Cat, who serves as an advocate for those suffering from mental illness, spreads positivity—and images of sumptuous wealth—from her personal stroller.

Bella the Yorkie enjoys fine dining and scoffs at the typical bowl of kibble. She lives for boat rides in the summer and personalized hair rollers that keep her fluff on point.

Oh, the places Georgie the Traveling Doodle has gone; from Nantucket to the California coastline, this pup has seen it all—and from a personal jet, no less.

Miniature dachshunds Louie and Lola, when not lounging in the pool on their own floaties, are dressed to the nines (often in adorable matching denim jackets) and love trotting the endless beaches of the Gold Coast, where they live.

Pepa Princess, the model-designed powerhouse, has a better pout than most famous supermodels and loves snacking on sushi and champagne while dressed in the latest faux—except for her own, of course—furs. 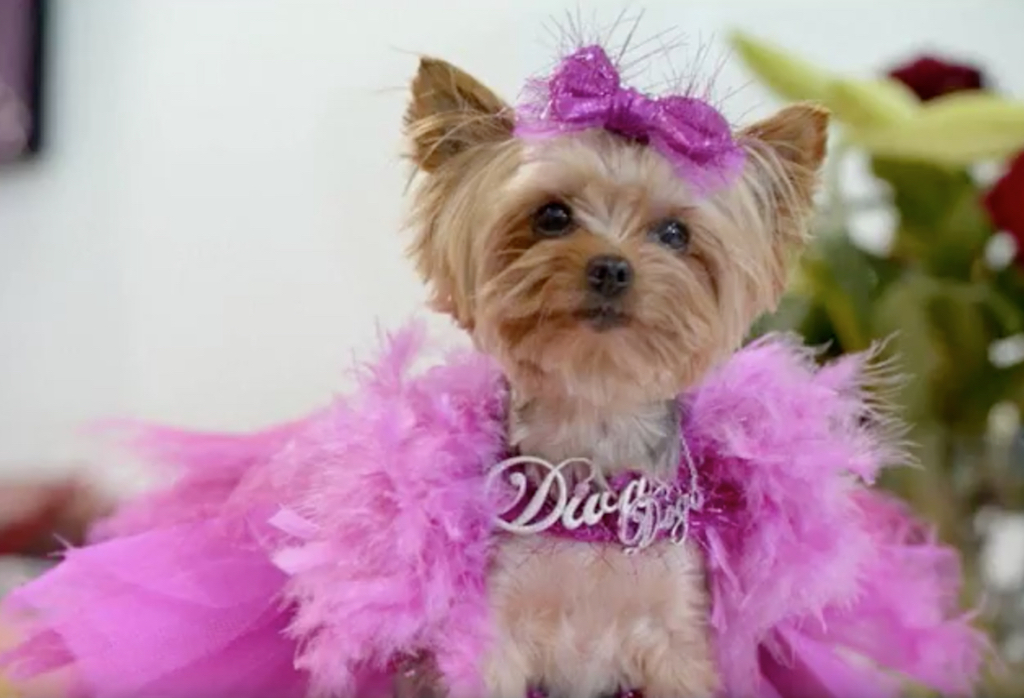 Lola, the lucky canine companion to millionaire Louise Harris, indulges in luxurious amenities, like weekly spa treatments, a millionaire dollar wardrobe, diamond jewelry, and a full-time nanny indulging in her every whim.

Betty, the pet of Hayley Dexter, has her own four-poster bed and is fed her meals by hand with a Swarovski crystal fork. On top of that, she even has her own private bedroom with an elaborate wardrobe worth thousands of dollars. 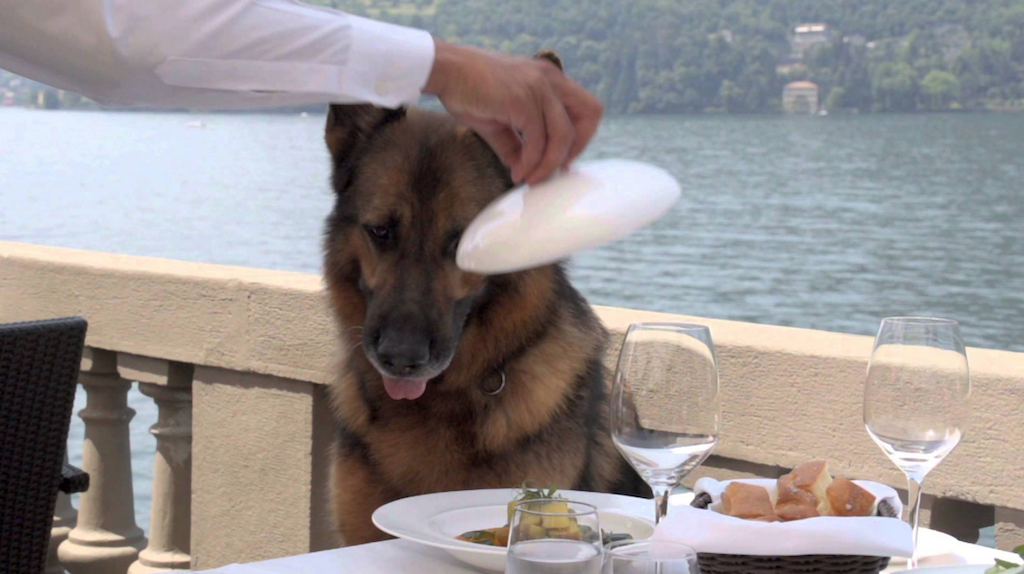 Gunther IV is worth an estimated $400 million—partly due to an inheritance left by his wealthy owner, German countess and multi-millionaire Karlotta Leibenstein. When he's not being towed around in his own private car to various adventures, Gunther is attending to his various properties that include the Bahamas, Germany, and Italy—and even the $7.5 million Miami home once occupied by pop diva Madonna.

37
These pups on a private plane.

These wealthy pups are armed and ready for their trip across the globe—from a window seat from their own private jet, no less.

38
This chihuahua and his chic Chanel loafers.

When he's not busy lounging in his owner's Chanel loafers, this pup's affinity for the finer things results in common hauls from Chanel.

39
These pugs in a convertible.

These pups from New Zealand enjoy taking joy rides in a chic convertible—which is complete with their own personalized car seats. They all are beyond spoiled rotten with their own room of amazing dog toys and birthday celebrations that most likely rival our own.

This Beverly Hills spoiled pooch lives on tea and accessories accented with gold. And for more ways to understand your favorite furry pal, check out these 19 Things Your Dog Is Trying to Tell You.