8 Exclusive Trips to Take With Friends

Traveling with a significant other or family is enjoyable in its own right, but sometimes you just need to get away with friends, and when you do, you want to do it up right. Say goodbye to simply sunbathing by the pool and quiet dinners, and say hello to sports, drinking and plenty of fun. Check out our list below of seven trips designed specifically to take with friends.

Jetting off to the Caribbean for picture-perfect weather and pristine beaches is all well and good, but, well … been there, done that. Head to Cartageña, Colombia, for a more exotic experience. Situated on Colombia's Caribbean coast, the 16th-century port city is becoming a destination thanks to its rowdy nightlife, burgeoning art scene and new crop of luxury hotels. (A Viceroy — billed as Colombia's first six-star hotel — is slated to open in Cartageña next year.)

The walled city has a rich history, and it now hosts an annual international film festival that draws creative types from around the world. It's also a great place to relax and unwind while enjoying delicious seafood. Cartageña's beaches are just as stunning as the best in the Caribbean, and if you're looking for exclusivity, you can take a speedboat to the picturesque Isla de Barú or head to the Islas del Rosario and snorkel in the coral reefs.

Though the flight from New York to Cape Town is upward of 16 hours, the array of activities available in the bustling South African port city is unparalleled. Surfing is a popular pastime, and novice and experienced surfers will feel comfortable riding the waves. Daredevils and thrill seekers will especially enjoy the waves at Dungeons, an offshore reef where they crest as high as 60 feet. Climbers should make time for a hike up Table Mountain, a breathtaking 3,500-foot peak.

The region is also known for its vineyards. A Stellenbosch craft-beer and wine tour winds through rolling hills and serves up typical South African snacks. On the food front, Mzoli's has a South African braai (barbeque) so delectable it's been endorsed by British Chef Jamie Oliver.

What's more, South Africa's Mediterranean-style climate means the city is paradise in the summer and cool-but-not-freezing in the winter, so you can plan your trip for any time.

If your group prefers cooler climes with plenty of action, Jackson Hole, Wyoming, is the place. Less crowded than winter havens like Aspen and Breckenridge, it offers a wide array of winter sports without hassle.

Situated within the Bridger Teton National Forest, the Jackson Hole Mountain Resort welcomes skiers and snowboarders of all levels and offers private tours and lessons. Snowmobiling, snowshoeing, and heli-skiing are also among the other activities offered.

If you need a break from the slopes, head on over to Grand Teton National Park and be on the lookout for moose, bison, and elk. The park, which contains crystal-clear lakes and over 200 miles of trails, features 7,000-foot-tall jagged peaks and truly epitomizes the beauty of the Rockies.

Stay at the Four Seasons Resort Jackson Hole and take advantage of the hotel's spa (we'd recommend getting a Swedish Alpine massage apres ski) for a truly luxurious experience.

With the 50-year embargo on Cuba officially lifted, now's the time to visit. Just 330 miles South of Miami, a trip to the caribbean island nation is something you and your buddies won't soon forget. Travel expert Lee Abbamonte recommends enjoying the nightlife along Havana's Malecón — a road that runs along the coast — and then checking out the Tropicana Nightclub on the outskirts of the capital city. For about $110 you can get a front row ticket, dinner, dessert, champagne, a bottle of Havana Club rum, and a cigar.

If picture-perfect beaches are more your thing, take a two and a half hour drive from Havana to Varadero and prepare to be amazed. The beach spans over 12 miles, and there are plenty of all-inclusive hotels to choose from. The hotels aren't top-notch (big European chains dominate the beach) but luxury American chains are slowly making their way in.

Billed as the "man's version of group health retreats," the Aspen Man Camp offers customizable getaways for three to eight at a time. It specializes in rugged outdoor activities including rock climbing, mountaineering, river rafting and race car driving. Each guy gets his own Harley Davidson motorcycle for the duration of his stay. Olympic-style weightlifting, martial arts training in the Rocky Mountains, and "girl-getting techniques" are offered as well. 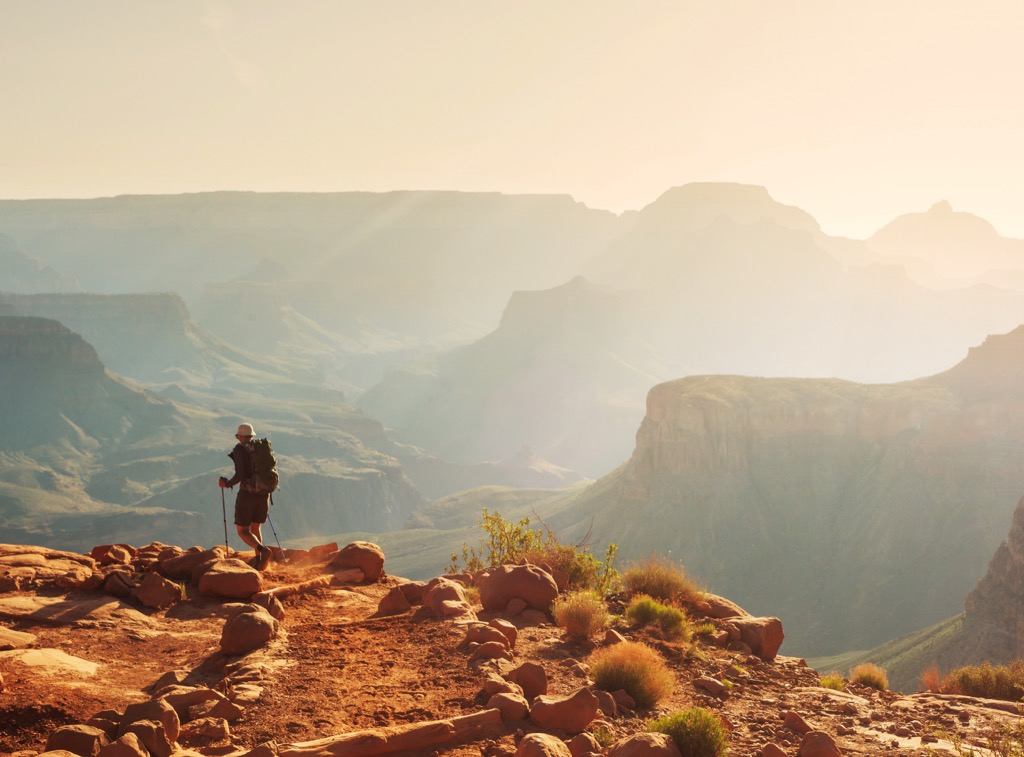 Seeing the Grand Canyon on a family vacation is one thing, but biking the natural wonder with your friends is pretty exceptional. Grand Canyon-based Bright Angel Bicycles offers three different tours (including a winter option on bikes) and each leads you to stunning viewpoints where your professional guide gives intel on the area's geology, anthropology, and wildlife.

If you prefer to set off on the trails on your own, hiking equipment is also available and you can grab sandwiches and salads on the go from the Grand Canyon's Coffee Shop.

Like a couple of the other locales on our list, Hawaii offers a myriad of outdoor activities in a can't-be-beat setting but there are no passports required. Celebrating a bachelor party? Consider flying to Oahu and playing a round of golf at the Turtle Bay Resort's Palmer Course, which was purposely designed by Arnie himself to weave holes masterfully around natural wetlands and through dense Hawaiian jungle, or hit up legendary surf spots like Pipeline and Sunset Beach. Sportfishing is also popular, and Oahu's MaggieJoe offers daily private and shared trips with VIP perks like catering available.

Need more to do and see? Oahu is also home to Hawaii's capital city of Honolulu, Pearl Harbor, Diamond Head, and Waikiki Beach.

Rio was the star of last summer's Olympics, and it turns out it's a great place for a guys' trip. The Fasano Hotel has spectacular pools overlooking some of the country's best beaches, and the luxury hotel's Baretto-Londra is considered to be the "best hotel bar in the world."

Rio is pretty much partying 24/7, and if you don't get invited out by a local while walking along Ipanema beach, hit up funk dance clubs like Rei do Bacalhau and Ilha dos Pescadores.