Some people wake up full of energy (even without their morning cup of coffee!) and don't tire until it's time to call it a day. It's common to assume this sprightly nature has to do with one's lifestyle or genetics, but it also may be due to their horoscope. We spoke to astrologers to find out why your significant other has no problem keeping up with the kids and the reason your best friend can stay up dancing until all hours of the night. Read on to discover the six most energetic zodiac signs, from a little bit lively to endlessly vivacious.

READ THIS NEXT: The Most Scattered Zodiac Sign, According to Astrologers.

Cancers might seem slower initially, but they just need to find the right motivation. "Their rhythms are totally different from other people," astrology writer Leah Goldberg says. You might find it odd that this sensitive water sign goes from being highly energetic to a homebody, but there's a reason for these fluctuations. Goldberg explains that the moon rules Cancer, and its phases affect their energy levels. When there's a full moon, expect this sign to be full of life. When things aren't lined up as well, they'll probably opt for a cozy night in.

This highly visceral sign is known for absorbing others' energies. "Ruled by dreamy Neptune, the planet of inspiration and psychic receptivity, the visionary fish derives its lively energy from its deeply felt emotions," explains astrologer and blogger Charlotte Kirsten. So expect their energy levels to vary based on those of the people around them.

And when a Pisces' spirit picks up, watch out. "When their creative side mixes with their strong sense of intuition, their fantastical imagination often runs wild, lending to some lively, if not slightly chaotic adventures," says Kirsten.ae0fcc31ae342fd3a1346ebb1f342fcb

READ THIS NEXT: The Nicest Zodiac Sign, According to Astrologers.

These kings and queens of the jungle will be the last to leave a party, not only because they're still wide awake but also because they want to get as much time in the spotlight as possible. "Ruled by the luminary sun, their unbridled energy is incredibly infectious, and everyone around them knows it," Kirsten explains.

But it's not just about feeding their ego; Leos also want to guarantee that their life is full of new adventures. "[They're] constantly seeking meaningful experiences and want to see and do it all," says Kirsten. "They hate the idea of life passing them by, so [they] aren't ones to sit idle in front of the TV all day."

Gemini always has a packed social calendar and rarely needs downtime in between events. This go, go, go behavior has to do with being ruled by Mercury, which is "the fastest-moving planet in our solar system," Goldberg explains.

Mercury is also responsible for their love of meeting new people and chitchatting with anyone, as it's the planet of communication. "Known for their unwavering positivity, this fun-loving air sign is always bubbling with energy, especially where social gatherings are concerned," says Kirsten. "Gemini's quick-witted, curious, and intellectual nature makes them a true conversationalist."

For more astrology delivered straight to your inbox, sign up for our daily newsletter. 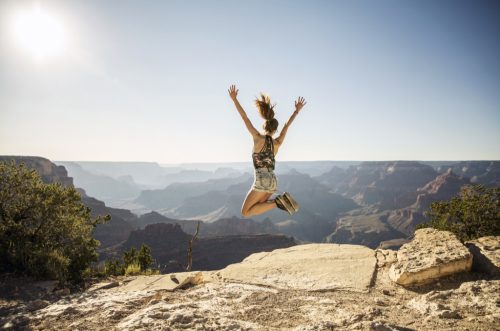 Goldberg compares Sagittarians to horses because both are "wild and free." Much like Geminis, Sags love having outrageous stories to tell their friends. But while a Gemini will want to tell you about a fun date they went on, a Sag longs to brag about a skydiving adventure or their latest international trip. "They're the most adventurous sign and have the energy to keep them going," notes Goldberg.

Their energy also comes from their "blindly optimistic ways," according to Kirsten. "Ruled by Jupiter, the planet of abundance, Sagittarians see possibility around every corner, which means many spur-of-the-moment decisions." They'll hop in a car and embark on a cross-country road trip without a second thought, and they won't stop until they get to their destination.

Aries don't have time to rest; they're too busy trying new things. Find this fiercely independent sign seeing a Broadway show one night, joining a kickball team the next day, and taking up pottery the following afternoon. "They are the first fire sign, and are part of the cardinal modality, meaning they like to initiate things," Goldberg advises. They're also born leaders, so they have no problem stepping outside their comfort zone and taking charge.

Because of Aries' competitive nature, they love sports and "a good physical challenge," says Goldberg. Since they tend to have so much pent-up energy, this is a natural way for them to get it out and have a good time doing so.