32 Ways to Change His Behavior With Movie Quotes

"You can't change him." That's what women are always told about the men in their lives. He's too closed off, he's too stubborn, he's too infantile, he's wildly messy… But hey, that's just the way guys are sometimes. Love him as he is, or move on. Which is mostly true—if you walk into a relationship hoping to radically alter his personality, it's not going to end well. Except… you can actually change him in small ways. You just need to know how to speak his language.

As we've reported, men can communicate almost exclusively with each other using movie quotes. (Why? Well, it's usually a way to get across something they're uncomfortable saying in their own words.) And if you learn how to repeat his favorite lines back to him at very specific moments, trust us: he'll be all ears. You don't even need to know the films. Just reel off these lines like an actor and he'll instantly "get it."

After all, even if there are times he doesn't listen to you, you can bet he'll always listen to Vito Corleone. And speaking of: read up on the 15 most debated movie endings of all time for more even more conversation starters.

1
The Problem: He keeps giving advice when all you want to do is vent. 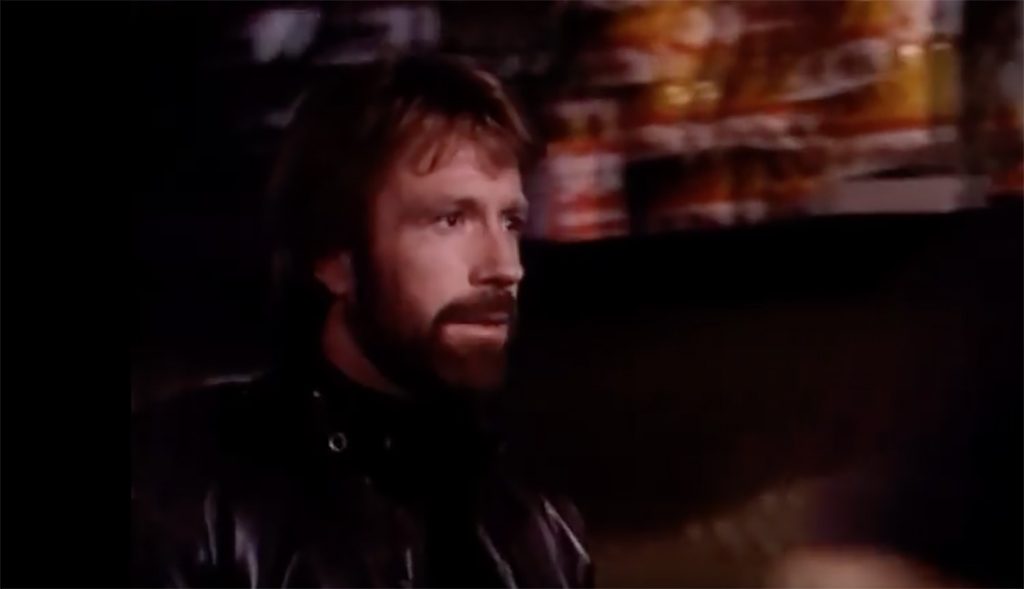 His first reaction might be shock and horror, until he remembers that this sentiment originated from Chuck Norris. And then he'll realize, okay, you probably have a point. And if you're looking for things not to say, here are 13 Secrets You Should Always Keep from Your Partner.

2
The Problem: He won't return your calls or texts.

Your Movie-Quote Response: "The greatest trick the Devil ever pulled was convincing the world he didn't exist." (The Usual Suspects, 1995)

If you want to send a chill down his spine and get him texting you immediately, trust us: simply reference Keyser Söze. And for more relationship advice, here are the 15 Signs You Should Definitely Be Single.

3
The Problem: He takes himself way too seriously. 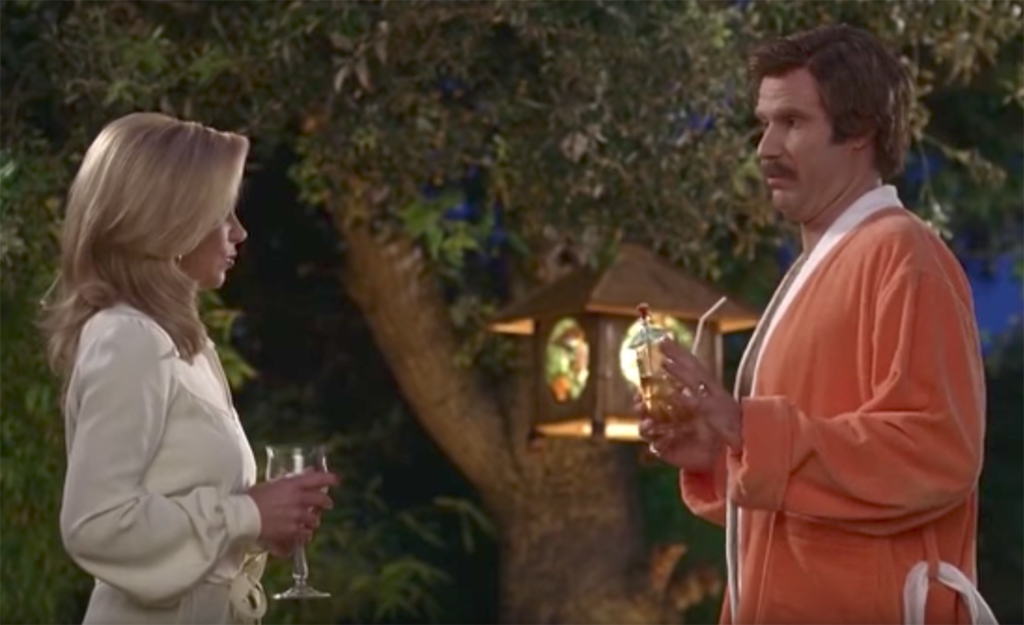 Your Movie-Quote Response: "I don't know how to put this but I'm kind of a big deal. People know me. I'm very important. I have many leather-bound books and my apartment smells of rich mahogany." (Anchorman: The Legend of Ron Burgundy, 2004)

Ron Burgundy is every man's Id. He's funny because he's the embodiment of our secret fears. But Ron's hubris doesn't match up to his abilities. Drop this line and… Presto, his smug self-satisfaction is gone. And when you guys are on better—and steamier—terms, don't miss these 6 Game-Changing Upgrades to Your Favorite Sex Positions.

4
The Problem: He's a tad "premature" in the bedroom.

Every man fancies himself a Han Solo, not a Luke Skywalker. So you've already successfully shamed him into upping his game. Now you can move on to shaming him into acting his age: our list of 40 things no man over 40 should own definitely includes Star Wars-themed bedsheets. 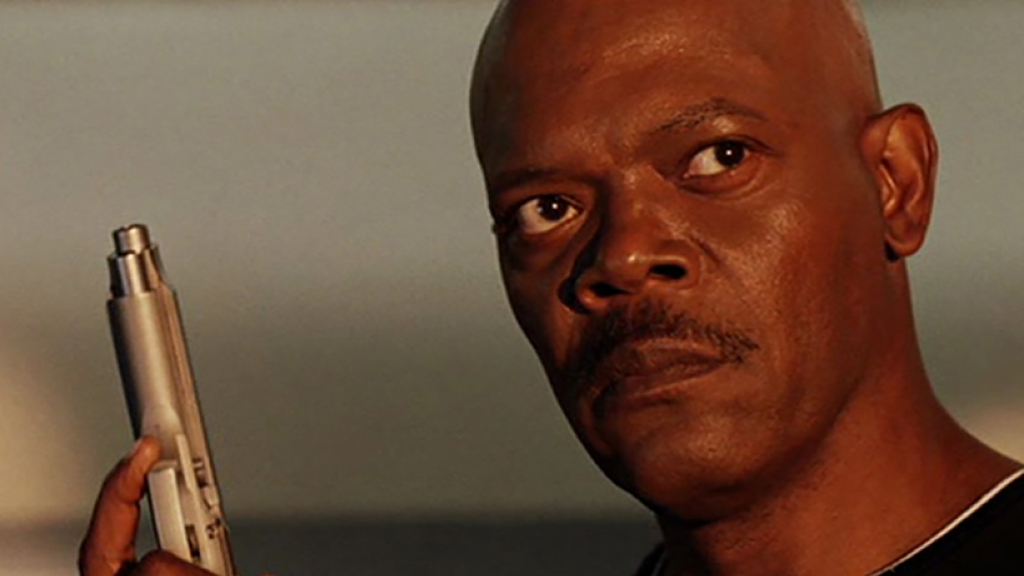 Your Movie-Quote Response: "I have had it with these motherf**king snakes on this motherf**king plane!"
(Snakes on a Plane, 2006)

He might pretend at first that he's got no idea what you're talking about. But then he'll notice the smelly socks draped over his couch, and he'll get it. And speaking of the olfactory organs: here are the 6 Best Foods for Smelling (and Tasting) Like a Million Bucks.

6
The Problem: He refuses to ever ask for directions. 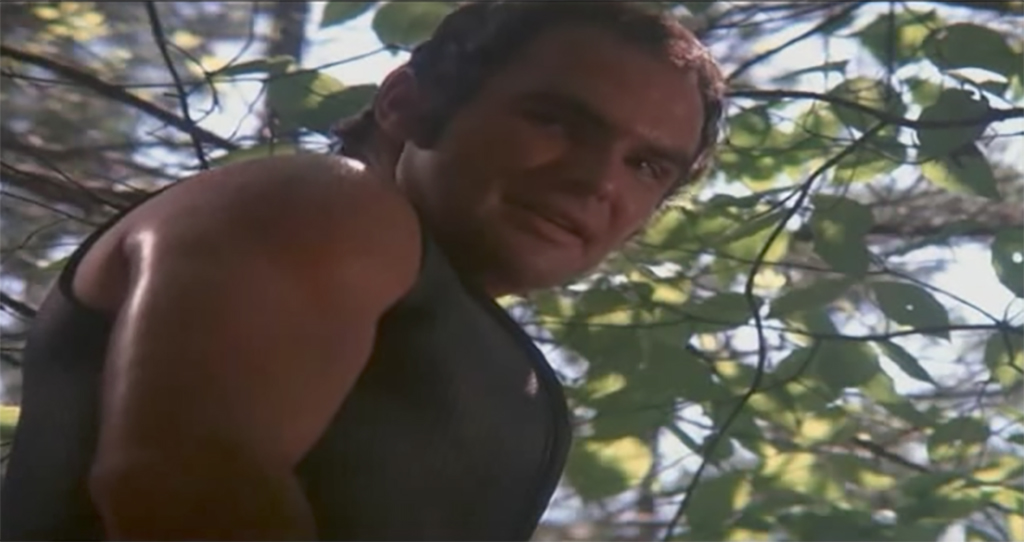 Your Movie-Quote Response: : "Sometimes you have to lose yourself 'fore you can find anything." (Deliverance, 1972)

At first, it kind of sounds like you're on his side. But then he'll remember a certain, um, memorable scene in Deliverance, and he'll not only get your point, but he'll also find that getting lost won't seem like such a good idea anymore. And for more reporting on the gender divide, here's Why Men Fall Asleep After Sex and Women Don't.

7
The Problem: He's constantly asking about your exes.

He can't argue with Jack Nicholson logic. No, he won't be able to handle the truth. Sometimes it's best to shut your trapper and stop asking questions.

8
The Problem: He's been "negging" you with backhanded compliments. 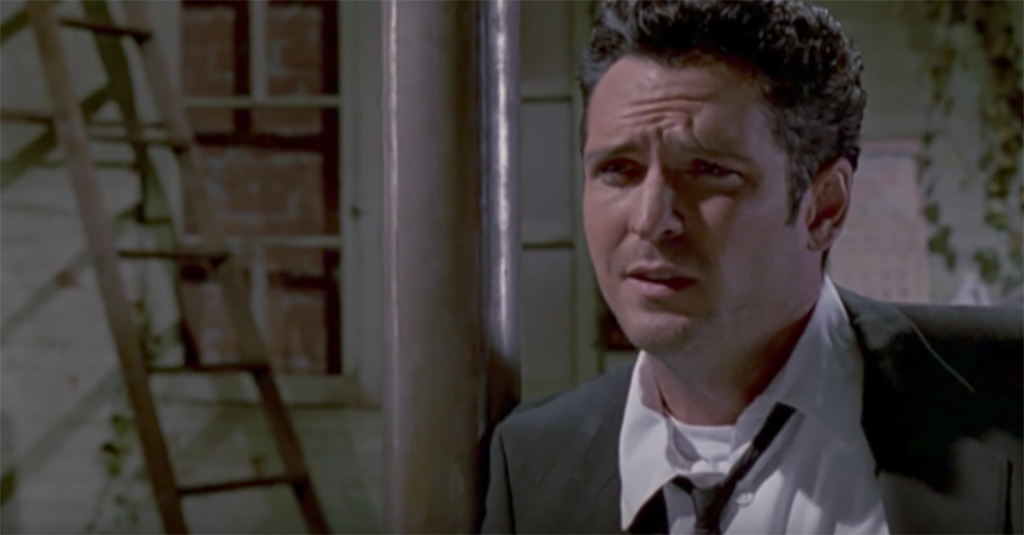 Your Movie-Quote Response: "Are you gonna bark all day, little doggie, or are you gonna bite?" (Reservoir Dogs, 1992)

Say it with just the right amount of Michael Madsen menace, and he'll know he's messing with the wrong person. Not that you're going to cut off his ear for sport or anything, but he may want to dial it back a bit. And speaking of dogs, maybe a furry friend would help diffuse these situations: here's how to buy the perfect dog.

9
The Problem: He wants to send you graphic selfies. 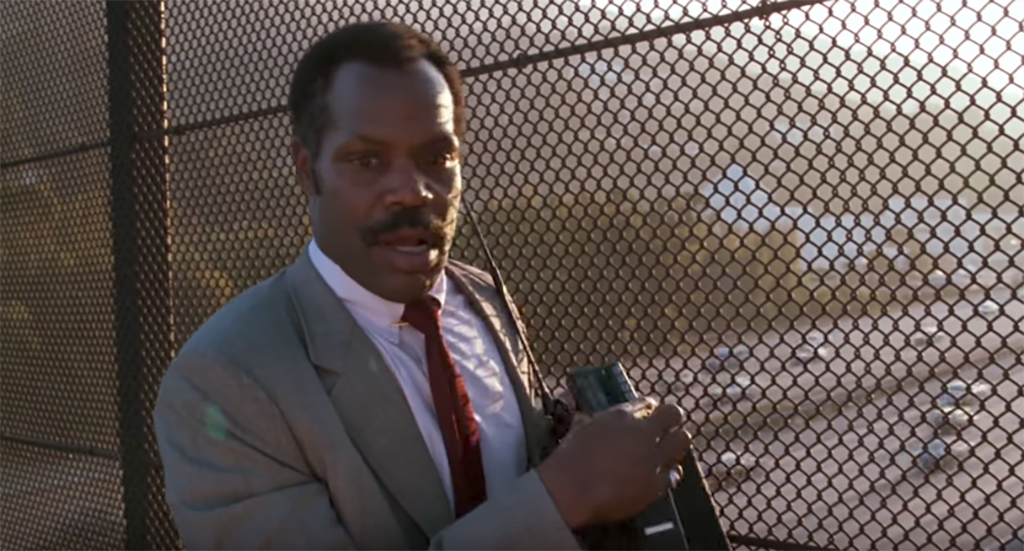 When it comes to showing off unsolicited body parts, we're all Danny Glover at heart.

10
The Problem: He keeps leaving the toilet seat up. Your Movie-Quote Response: "This is not 'Nam. This is bowling. There are rules." (The Big Lebowski, 1998)

No, there's no connection between bowling and his restroom habits. But he'll hear this and register what you mean instantly—and way faster than if you had said, "Steve, will you please leave the toilet lid down, please? More people use this bathroom than you." And for about the male mind here are the 10 Biggest Reasons Why Men Cheat.

11
The Problem: He keeps calling you "the wife" or "the girlfriend," like you're his property. 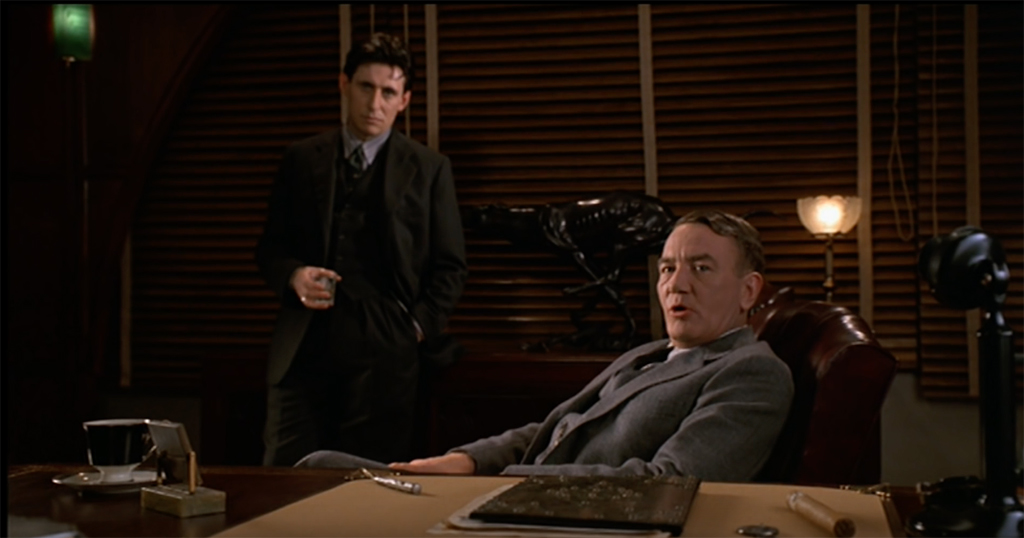 Your Movie-Quote Response: "You're exactly as big as I let you be and no bigger and don't forget it ever." (Miller's Crossing, 1990)

Congrats, you just dropped Albert Finney-sized bomb on him. After that, feel free to call him "the husband" or "the doofus." in your relationship.

12
The Problem: He has commitment issues.

Your Movie-Quote Response: "Beautiful, naked women just don't fall out of the sky, you know." (Dogma, 1999)

Referencing one of Kevin Smith's movies is a total psych-out, because he probably thinks you've never seen any of them, much less one of his worst. But your ability to cherry-pick this chunk of dialogue will do the trick. Trust us: guys don't have a problem with Silent Bob, but they never want to imagine themselves as immature as Jay. And for more great Hollywood coverage, here are the 15 Most Debated Movie Endings of All Time.

13
The Problem: He gawks at younger women on occasion.

Yes, Indiana Jones (or Harrison Ford) was talking about himself, but the same logic applies to any gender. If you're worried you might need something more along the lines of couples therapy, here are 7 ways to make sure your marriage lasts forever.

14
The Problem: He can't stop whining about his cold.

Yes, it was a forgettable movie. But when you bring out Bruce Willis, the guy who once said "Yippee-ki-yay," to tell him to stop feeling sorry for himself, he'll take you very seriously. 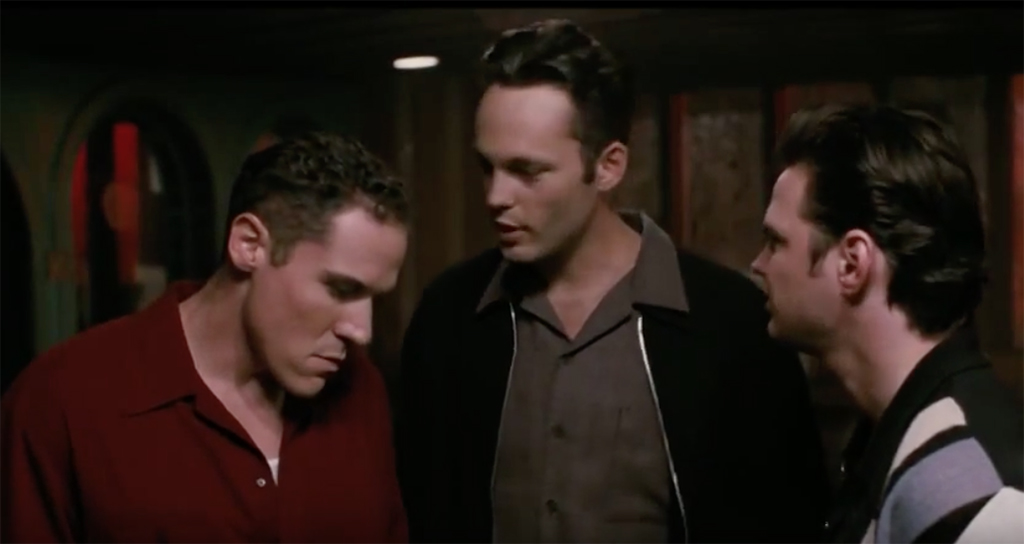 Even if you haven't seen the movie since the mid-90s, he knows that Vince Vaughn was just being nice. His pal, a very schlubby Jon Favreau, was anything but "money."

16
The Problem: He keeps telling you to "smile." 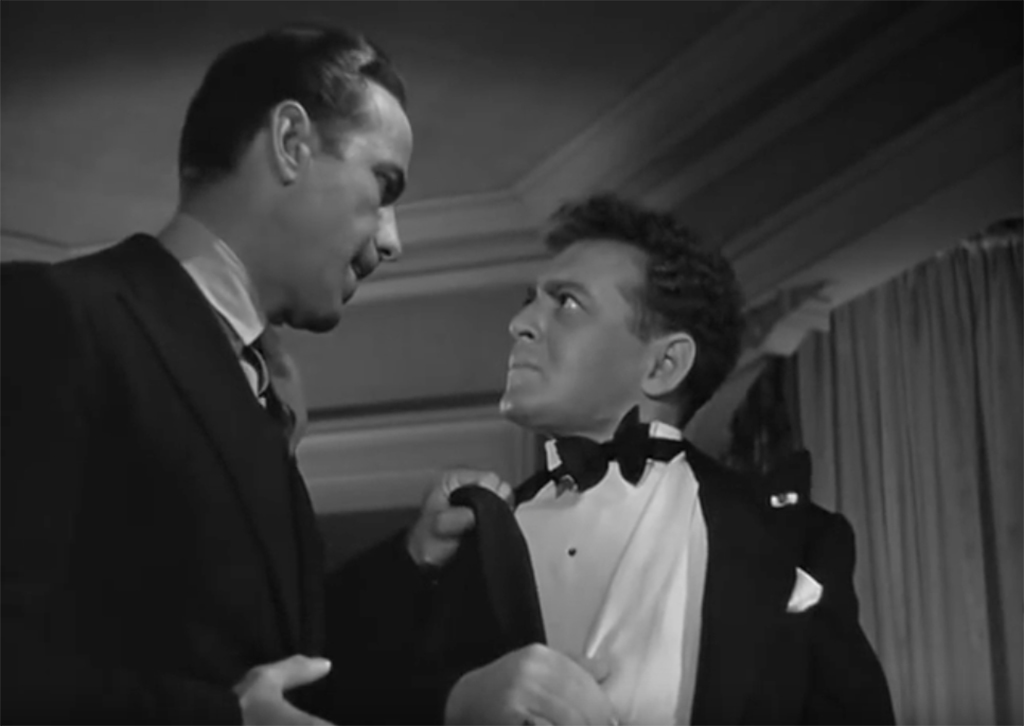 Your Movie-Quote Response: "When you're slapped you'll take it and like it." (The Maltese Falcon, 1941)

Because a man who talks to women like it's the 1940s deserves a lot more than being threatened like Humphrey Bogart. But this is an excellent start. Also, refer him to this list of 30 things women actually want to hear.

17
The Problem: He's getting overly "friendly" when you're not in the mood. 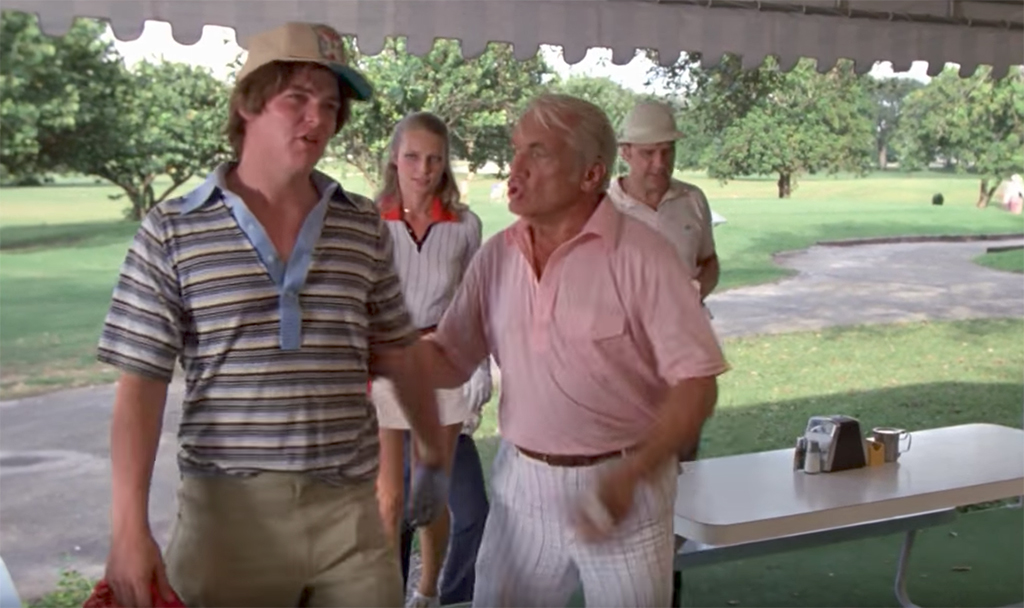 Your Movie-Quote Response: "You'll get nothing and like it." (Caddyshack, 1980)

There's no arguing with a grumpy Ted Knight.

18
The Problem: He complains that it takes you too long to get dressed. 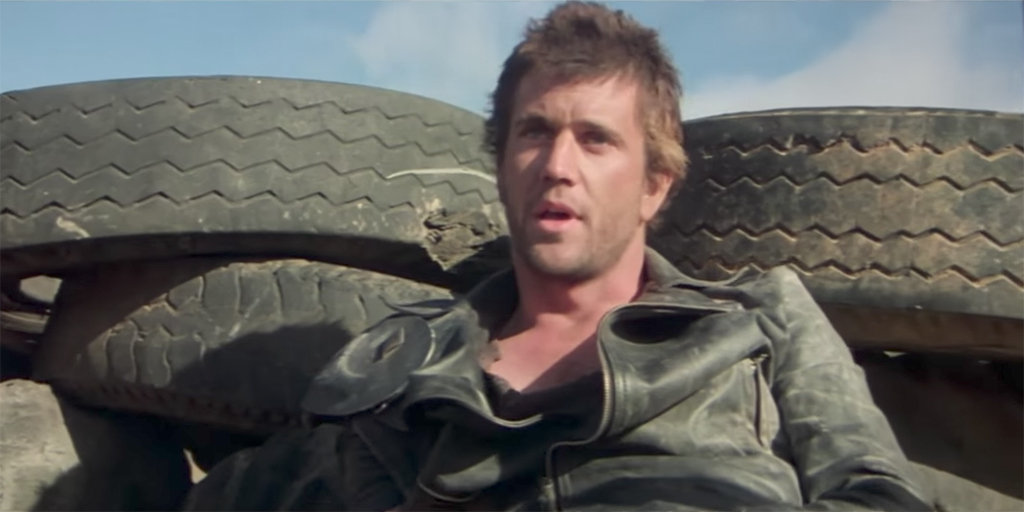 Bottom line: he'll realize he has more capacity for patience than he thought.

19
The Problem: He takes a long time in the bathroom. 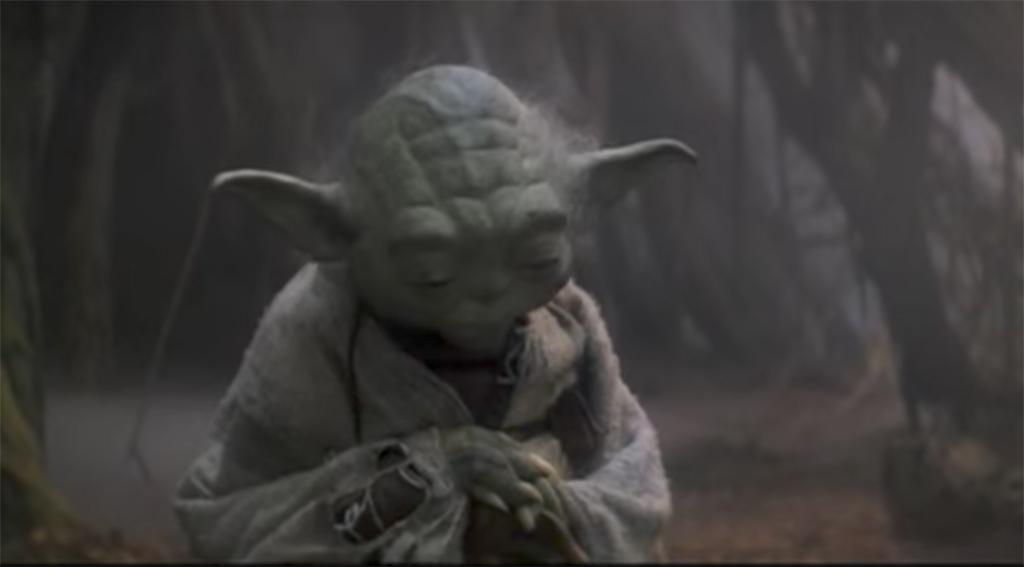 This will be more effective than you ever imagined.

20
The Problem: He orders for you at a restaurant. 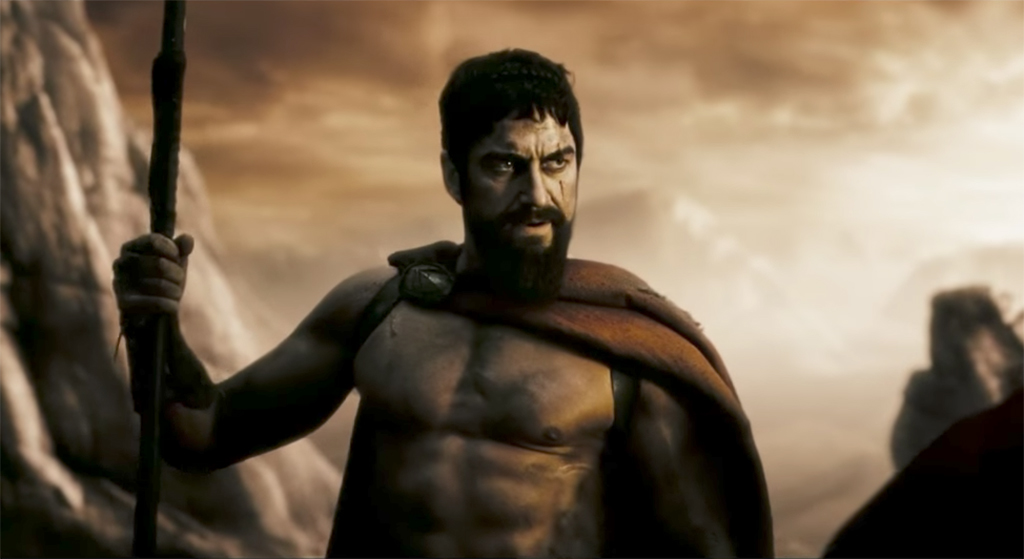 Afterwards, he will be feeling far less debonaire.

21
The Problem: He still has Tinder on his phone. 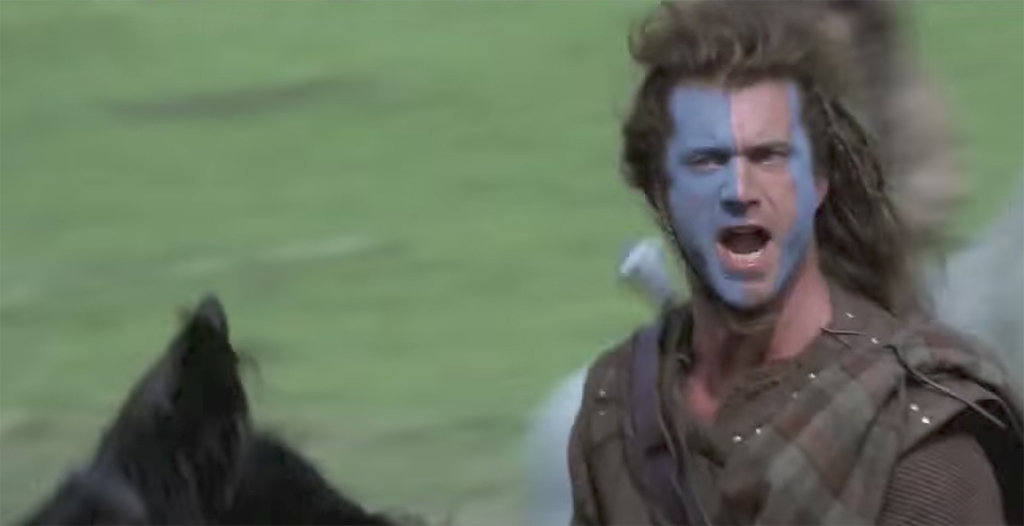 Your Movie-Quote Response: "They may take our lives, but they'll never take our freedom!" (Braveheart, 1995)

There are few things as devastating to a guy's secret "I wish I was still single" ego like being mocked with a Mel Gibson motivational speech.

22
The Problem: He made you come to a family gathering, and then completely ignored you.

Your Movie-Quote Response: "A man who doesn't spend time with his family can never be a real man." (The Godfather, 1972)

For a split second, it'll feel like a compliment. But then he'll remember that the "family" in this sense is a bunch of mobsters, and the wives get ignored or abused… (On that note, guess who almost became the Godfather but turned it down?)

23
The Problem: He wears way too much cologne. 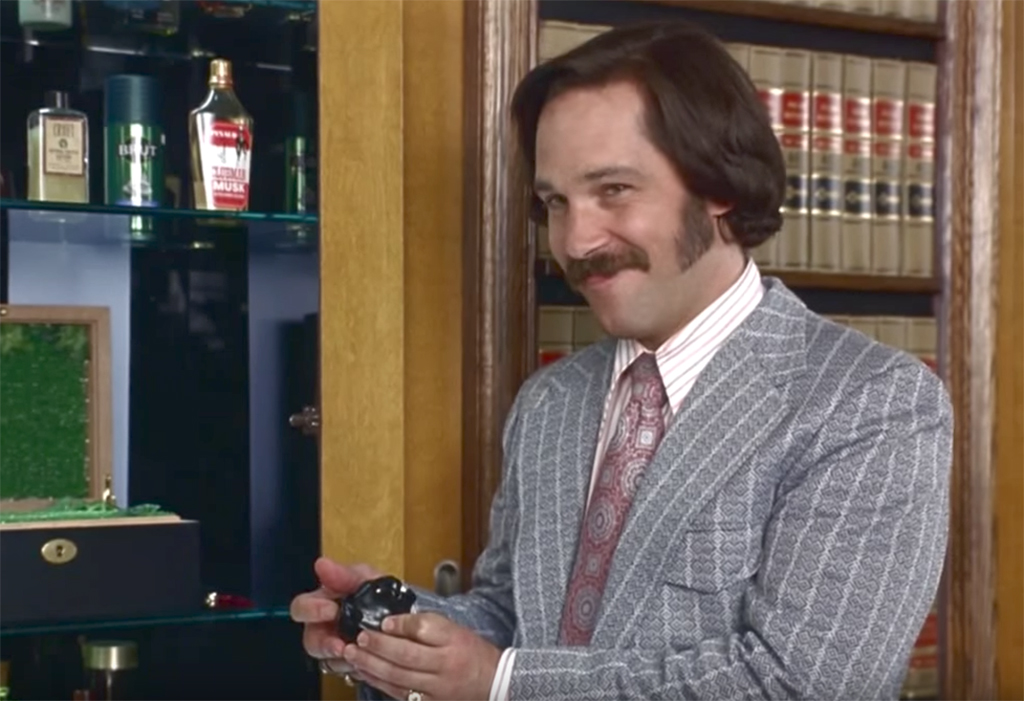 Your Movie-Quote Response: "60% of the time it works every time." (Anchorman: The Legend of Ron Burgundy, 2004)

Nothing will make a man rethink his body fragrance decisions than being reminded of Sex Panther. Stock up on these 6 foods for smelling (and tasting) like a million bucks, instead.

24
The Problem: He's not a fan of giving oral sex. 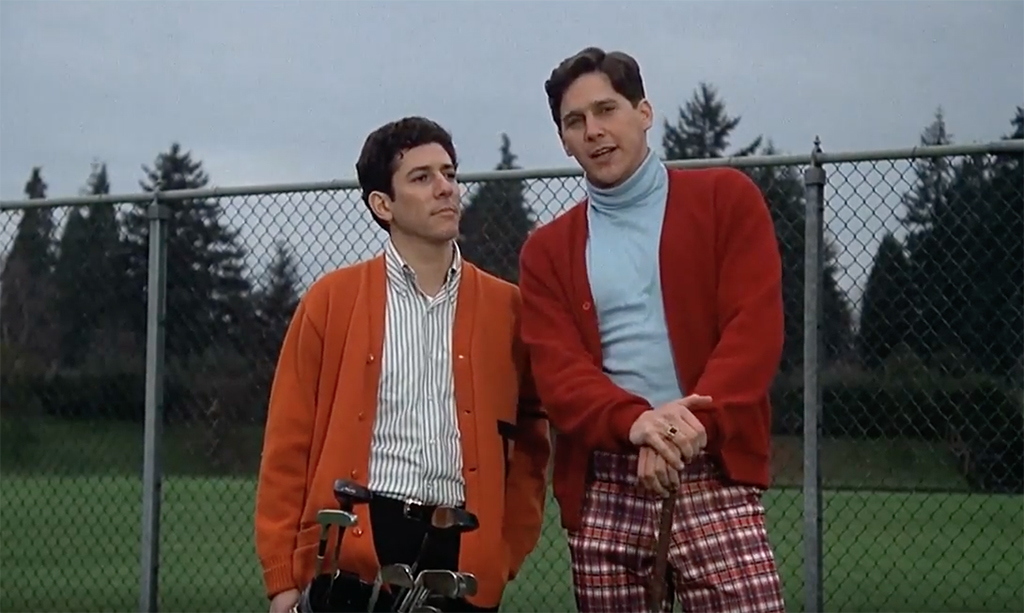 Your Movie-Quote Response: "Don't think of it as work. The whole point is just to enjoy yourself." (Animal House, 1978)

Otter might've been talking about golf, but his advice applies to just about everything in life that some people treat like chores but should be appreciated as fun. While we're on this topic, he might need more advice: these are the Biggest Oral Sex Mistakes He's Making. 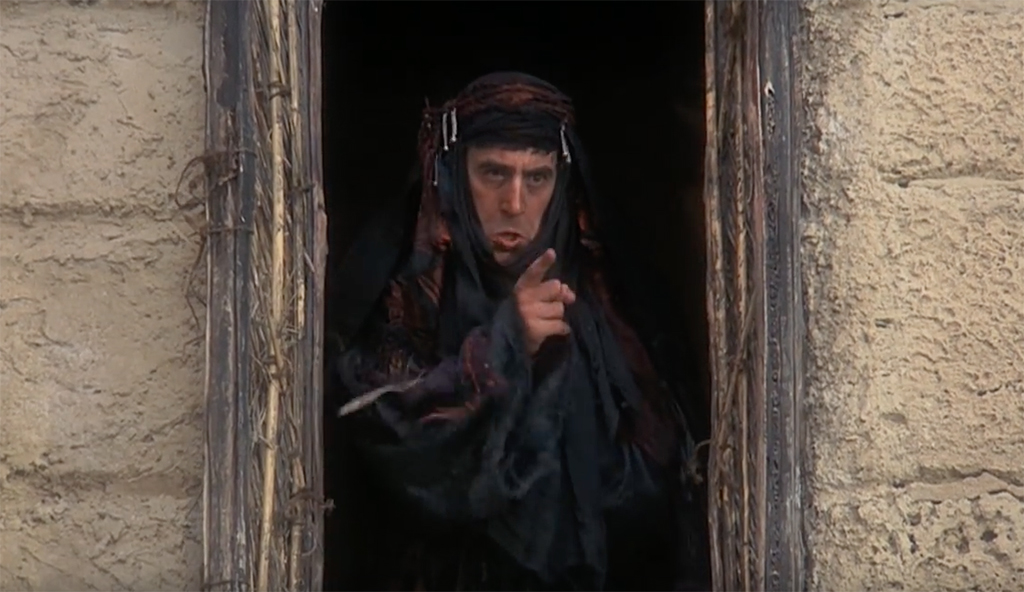 With a single quote you may have him second-guessing his closest relationship in the world.

26
The Problem: He forgot to "delete history." 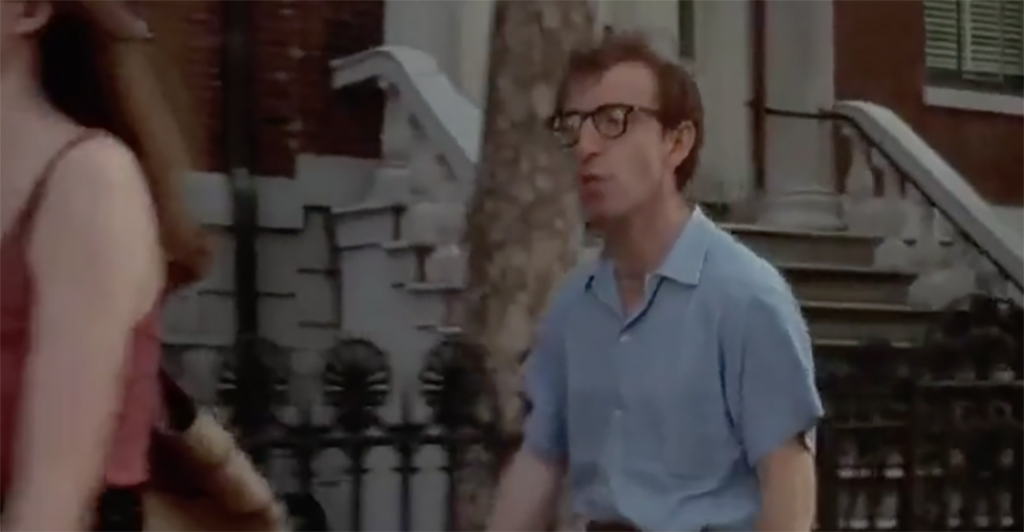 27
The Problem: He likes to manspread. 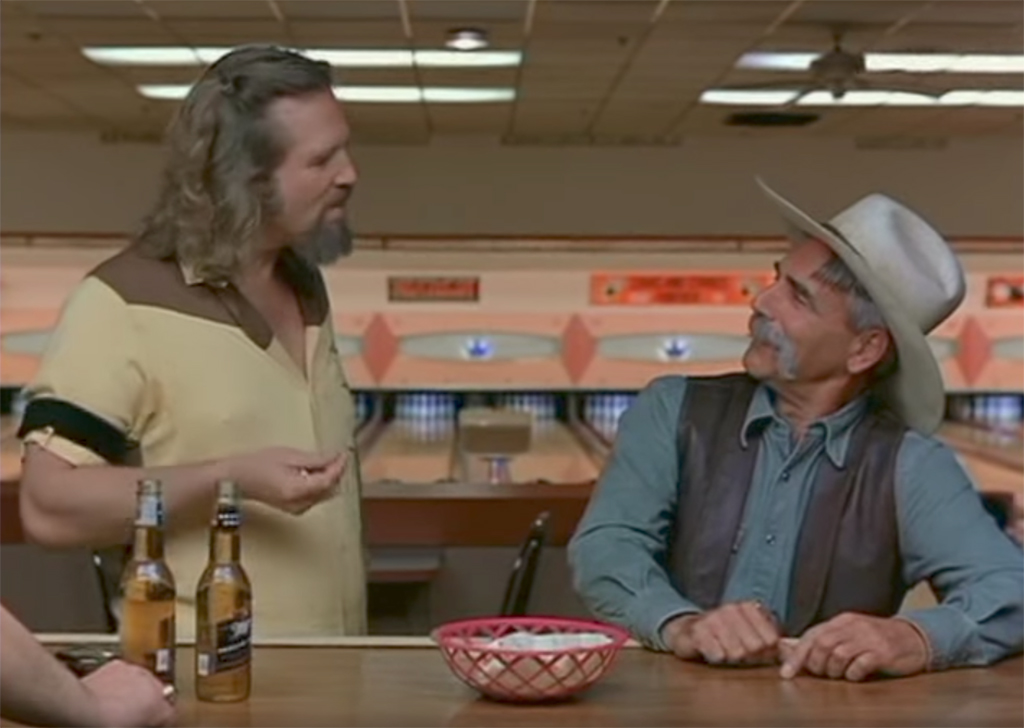 Your Movie-Quote Response: "The dude abides." (The Big Lebowski, 1998)

Just remind a guy that man-spreading makes him look like Jeff Bridges in a bathrobe and jelly sandals and just wait and see how quickly those knees snap shut.

28
The Problem: His gaze keeps drifting to your cleavage.

29
The Problem: Your orgasm isn't on his sexual agenda. 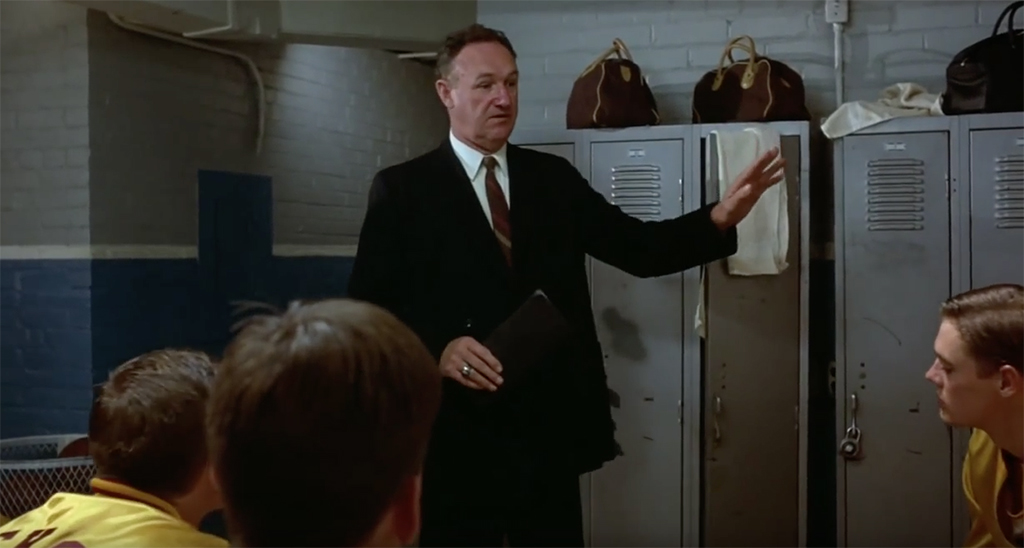 Your Movie-Quote Response: "If you put your effort and concentration into playing to your potential, to be the best that you can be, I don't care what the scoreboard says at the end of the game, in my book we're gonna be winners." (Hoosiers, 1986)

It sounds like you're being supportive, but he'll know what you're really telling him. Of course what the scoreboard says at the end matters.

30
The Problem: He drives the same banged-up car he's had since college. 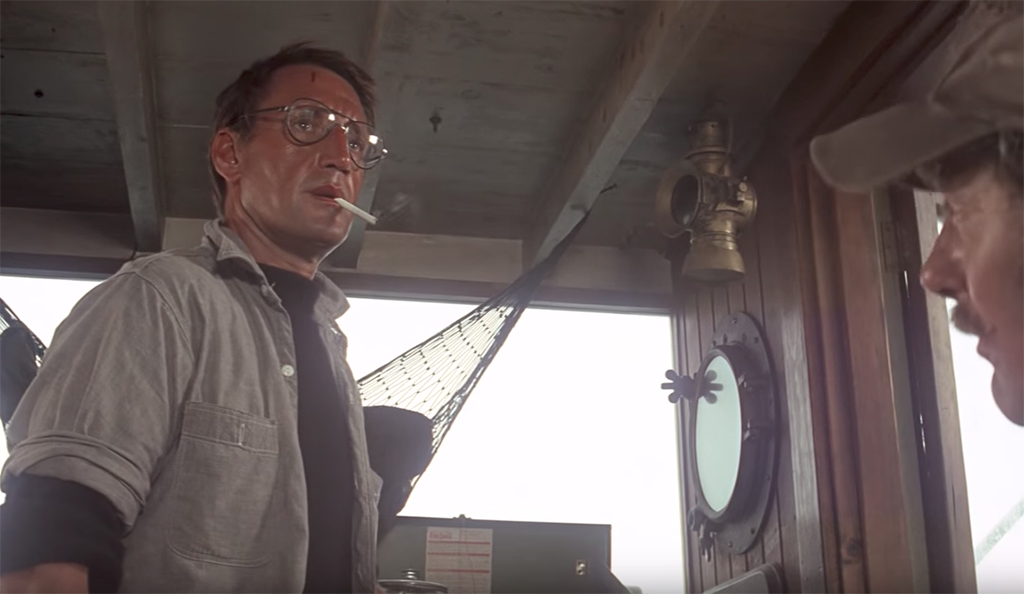 Even if the guy couldn't care less about a fancy ride, this will hit him where it hurts.

31
The Problem: He won't stop looking at his phone or electronic gadget. 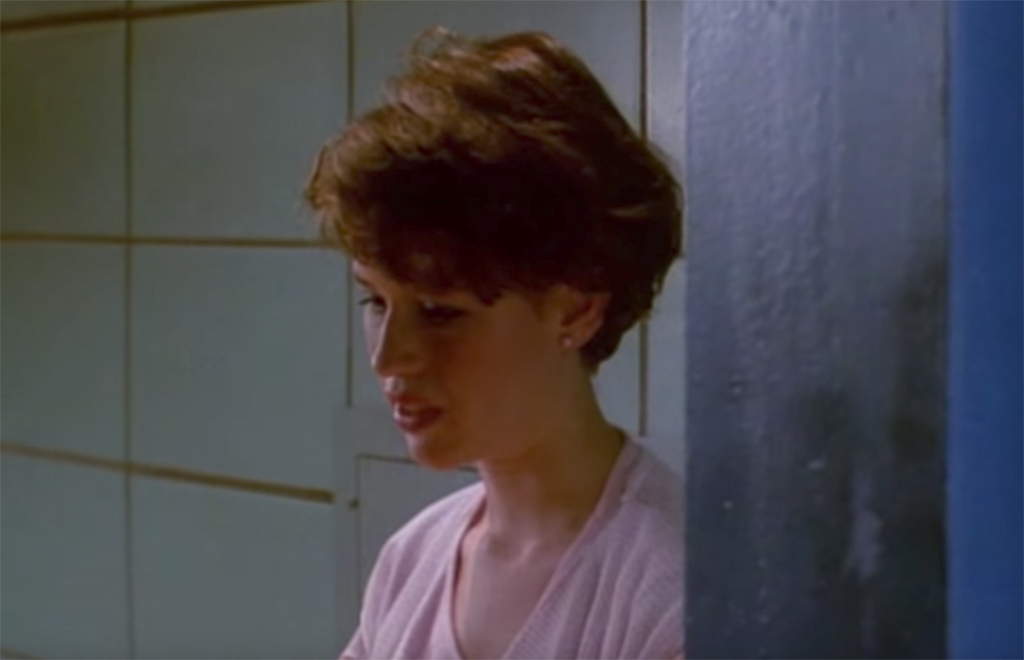 Your Movie-Quote Response: "I can't believe I just gave my panties to a geek." (Sixteen Candles, 1984)

He'll instantly realize that his sexual stock has plummeted from Jake to Farmer Ted. Bonus: tell him to read up on the 11 ways to conquer a smartphone addiction immediately.

32
The Problem: He overreacts to every minor inconvenience. 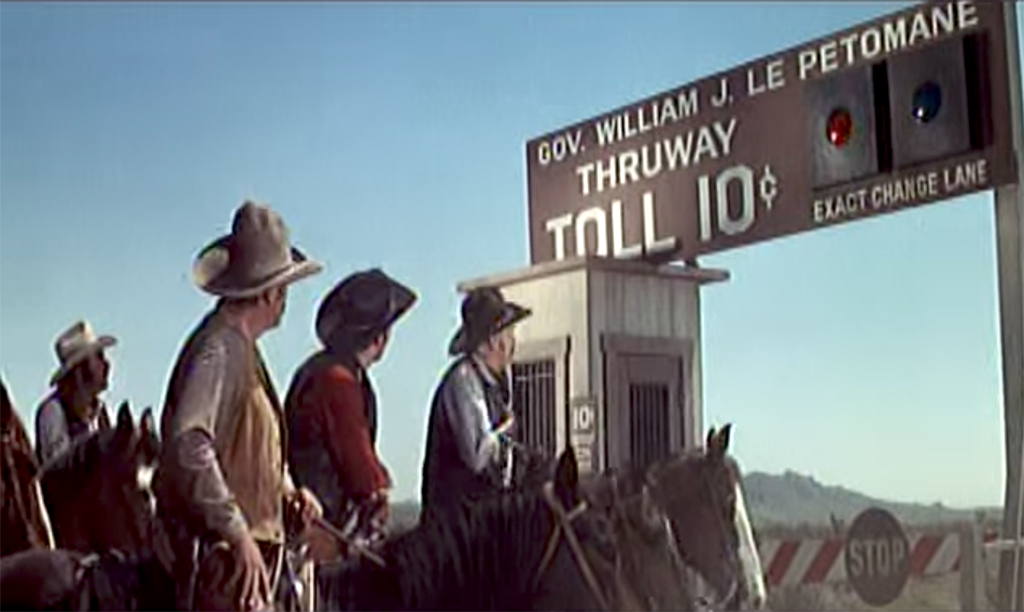 Your Movie-Quote Response: "Somebody's got to go back and get a sh*tload of dimes." (Blazing Saddles, 1974)