Leaders of the Pack: The Best New Cars for 2018

A brief and scenic cruise into the future.

Though 2017 has been a surreal year in the worlds of sports, pop culture, and politics, it's been a truly excellent year in the world of cars. We've seen the arrival of an amazing array of sedans, droptops, trucks, even campers. But get this, car fans: 2018 is shaping up to be even better.

Kia, Honda, BMW, McLaren, and others all have some new models gearing up to hit the market that would excite anyone with a lead foot and a need for speed. (Or just a taste for great wheels.) From the prosaic to the exemplary, here we present some highlights of the best new cars revving their engines on the horizon. But before you bring any of these beauties on the open road, make sure you know these 10 essential driving strategies. 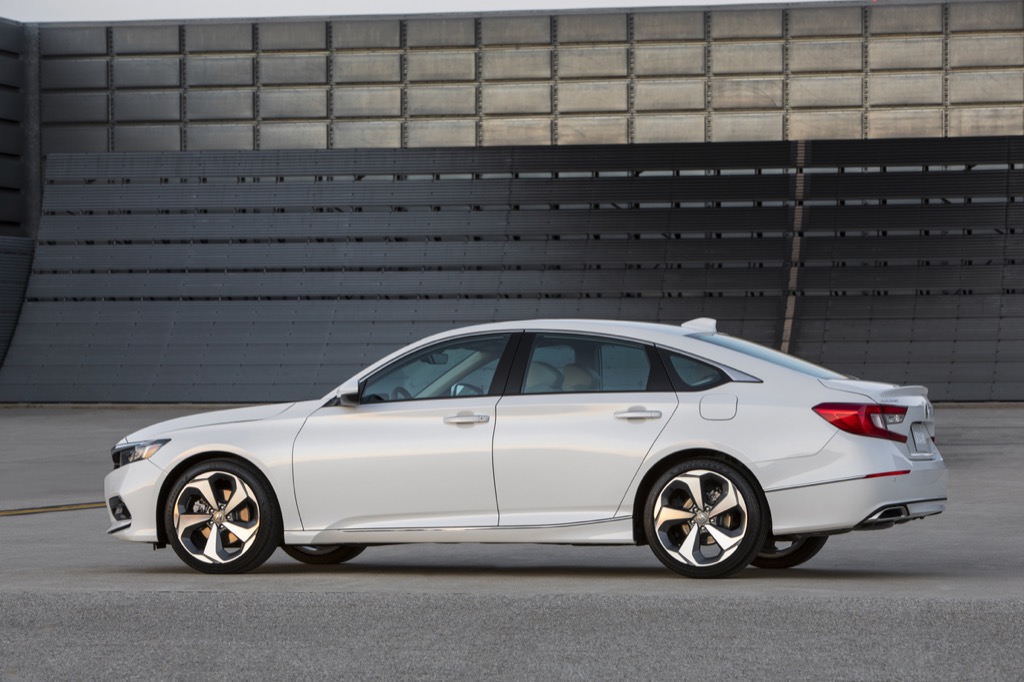 With demand for SUVs and Crossovers leaving sedans in the dust, Honda, Hyundai, and Toyota are betting that the segment can maintain a pulse. Out of this bunch, the 10th-generation Accord has the best chance of winning over converts. We'd even call it handsome—not a word typically associated with Hondas—due largely to much-improved proportions and stance, the result of a longer wheelbase with shorter overhangs and lower height.

The new Accords are equipped with downsized 1.5- and 2.0-liter turbocharged engines that beat their previous larger units for pulling power and drivability. Naturally, it boasts an array of driver-assist tech to paper over human error. Pricing is expected to around the current $22,455 base price. And if sedans are your thing, check out the 10 luxury sedans that will show your neighbors who's boss. 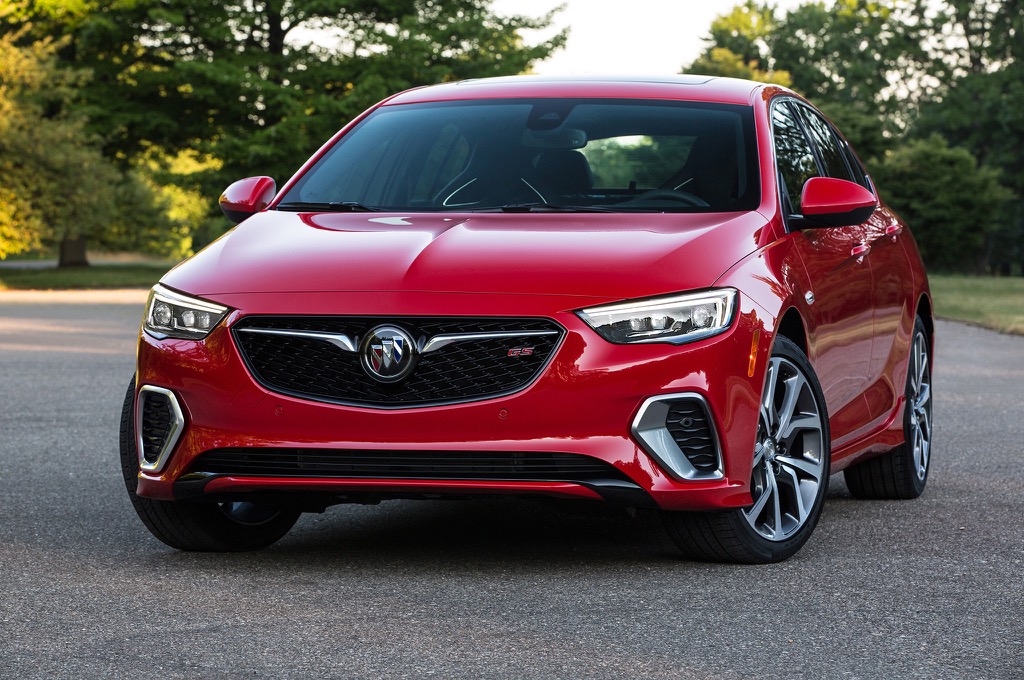 In contrast to Honda, and most other carmakers, Buick has eschewed a smaller, forced-induction power plant for its second-generation Regal GS. Now configured as a five-door sportback, it comes bearing the same formidable 310 horsepower 3.6 liter V6 that motivates the Cadillac CT6. (That's up from the previous 2.0 liter turbo four of the outgoing model, providing 51 more horses—which is proof that Buick is baring its teeth and ready to be taken seriously.)

The GS (Gran Sport) designation derives from muscular, high-performance Buicks of the late Sixties, when the Grand National was a standout performer of its time. The 2018 Regal is available only in all-wheel-drive with a new nine-speed automatic and GM's stellar Continuous Damping Control, which magically cancels out the bangs of all but the worst rutted roads. Inside, it has an interior that looks like money, featuring stunning front seats with creature comforts in league with Europe's best offerings. Base price is a very reasonable $39,990 including destination. And for more great luxury vehicles, check out the 10 droptop wonders of the world. 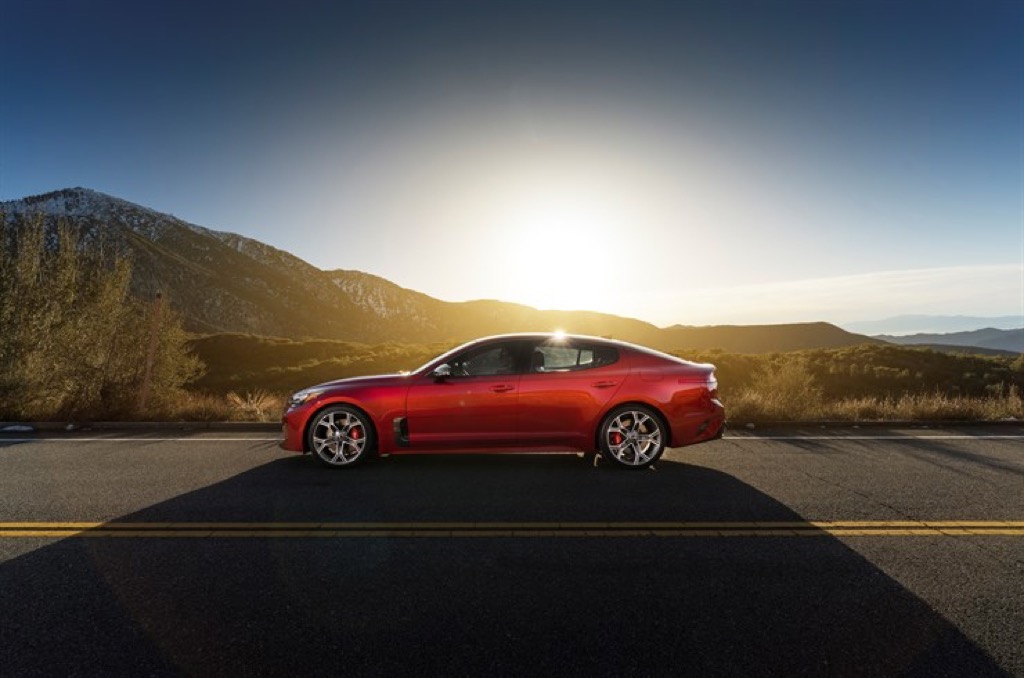 Kia's new Stinger is looking to punch well above its weight class with a remarkable new entry into the mid-range luxury segment. All reports indicate that Kia's freshman effort may surprise the upper classmen with its competitiveness. The turbocharged four-cylinder Stinger (starting around $30K) and the twin-turbo 3.3 liter V6 GT (between $40- to $50,000) hits the sweet spot of the market. We smell a winner. 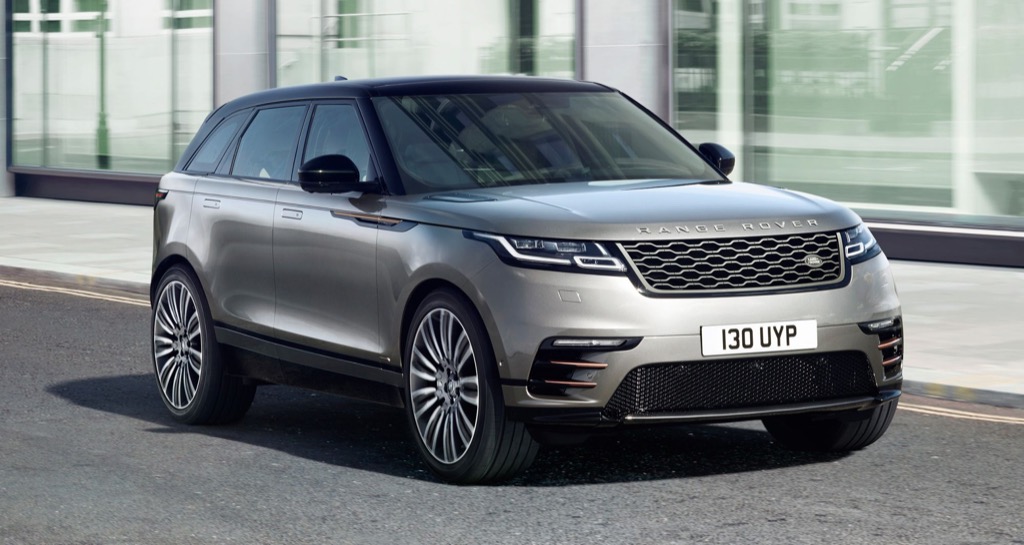 An elegant new member of the family, the silky-smooth Velar assumes its rightful place in between the Range Rover Sport and the smaller Evoque. Fiendishly, Land Rover intends to limit the 2018 model year to only 500 First Editions. Be careful, this could get ugly. The fortunate few will be rewarded with Land Rover's new InControl infotainment system featuring twin 10-inch touch screens. Built on the same superb platform as the red-hot Jaguar F-Pace, the Velar will offer three engine selections including a four-cylinder diesel, a 2.0 liter gas-powered 247-hp inline-four, and a 380 horsepower supercharged V6. First Editions all come equipped with the top line V6 and other premium features for around $90,000. The entry-level model, available later, will come in at nearly half that price. But if you want something even bigger than an SUV, check out these 10 new drool-worthy trucks. 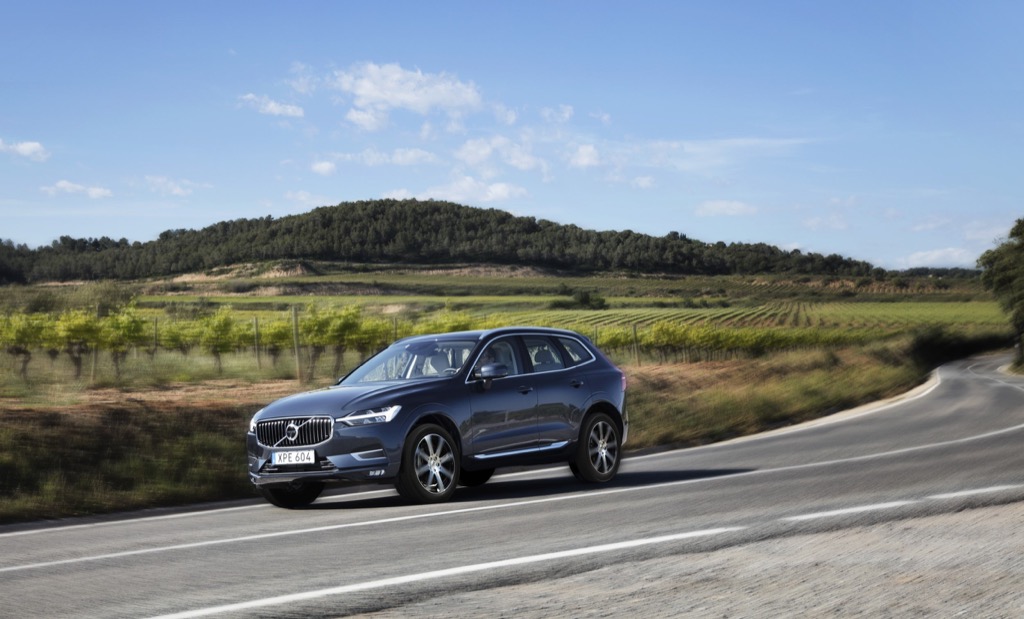 Volvo's recent product makeover has been an unqualified hit. To breakthrough the noise and remind everyone of their legacy of great safety, the XC60 features groundbreaking innovations like Oncoming Lane Mitigation, which employs a system called Steer Assist to prevent head-on collisions.

It will offer three engine options, including the base T5 turbocharged 2.0 liter inline-four with 250 horsepower; the T6, which includes a supercharger and an output of 316 hp; and the T8, with a plug-in-hybrid system that reaches a combined total of 400 horsepower. Eight-speed automatics paired with all-wheel drive are standard. 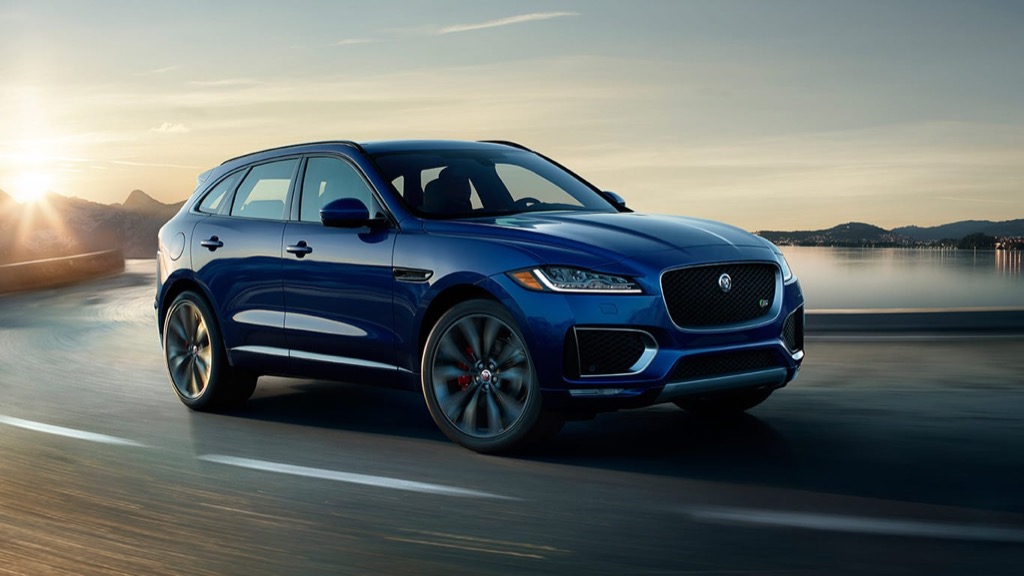 Hard on the heels of its runaway hit F-Pace SUV comes Jaguar's comely compact E-Pace. It shares DNA with the feline F-Type sports car, and its sleek countenance and raked, coupe-like roofline look decidely more car than SUV. An all-electric I-Pace is slated to follow the base 2.0-liter, 246-horse turbocharged four-cylinder gas engine (or the 296 hp upgrade).

This scruffy little kitty has its claws out for the BMW X1, Mercedes GLA, Audi Q3, Porsche Macan, as well as the aforementioned Volvo XC60 and Range Rover Evoque. That's one tough neighborhood. We fully expect the E-Pace to hold its own. Prices start at $39,595. But with that much speed, make sure you know the surefire method for avoiding a speeding ticket.

The launch of the super-sexy 471 horsepower Lexus LC 500 flagship in 2017 was only the beginning of the brand's march uptown. Rumors abound that later this year at the Tokyo auto show Lexus will debut an ultra-high-performance LC F. It's expected to be powered by a twin-turbocharged, 600 horsepower, 4.0 liter V8 mated to a brand new 10-speed automatic transmission. Details are scant, but that already incredibly lithe LC body will get suitably more aggressive with the addition of brake-cooling ducts, a fixed rear wing, and more, wrapped around 20-inch wheels. Price will likely be twice that of the current LC 500. Can't wait! Stay tuned. 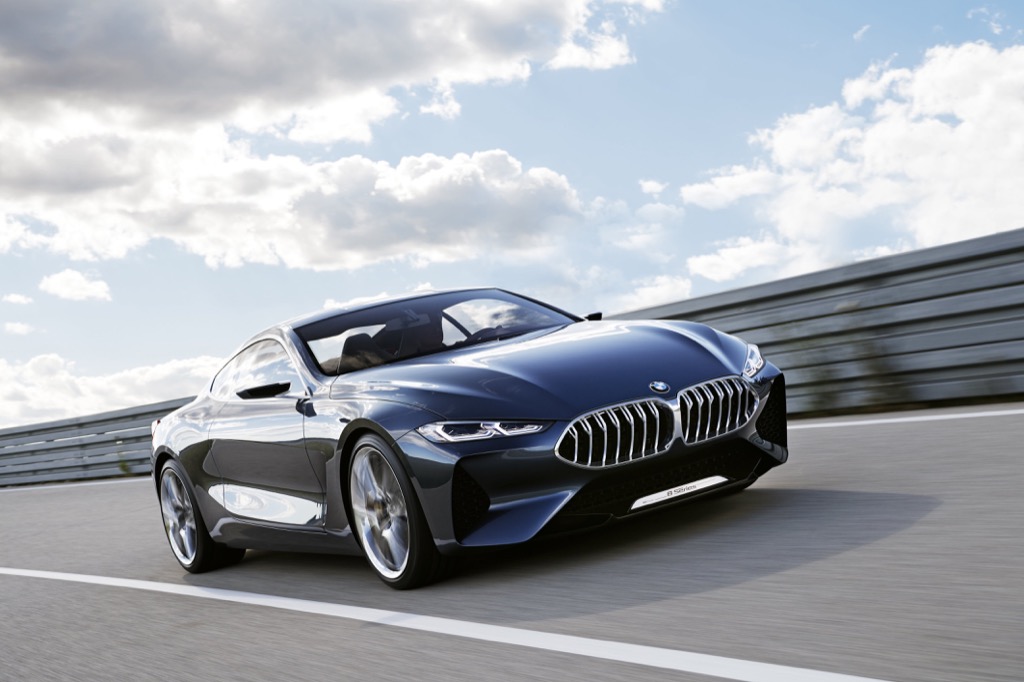 The magnificent new 850i is a styling tour de force, certain to quell critics chirping that BMW had ceded its design leadership in recent years. Expect the usual pace of iterations starting with BMW's impeccable and smooth 3.0 liter in-line six right up to the marauding twin-turbocharged V8 from the next-gen M5. Body styles will include 4-door Gran Coupe and cabriolet versions, as well as a full-throated M8. Expect prices north of $150K, moving the Bavarian marque further upmarket. Who knows: This beauty may make our list of the best BWMs of all time. 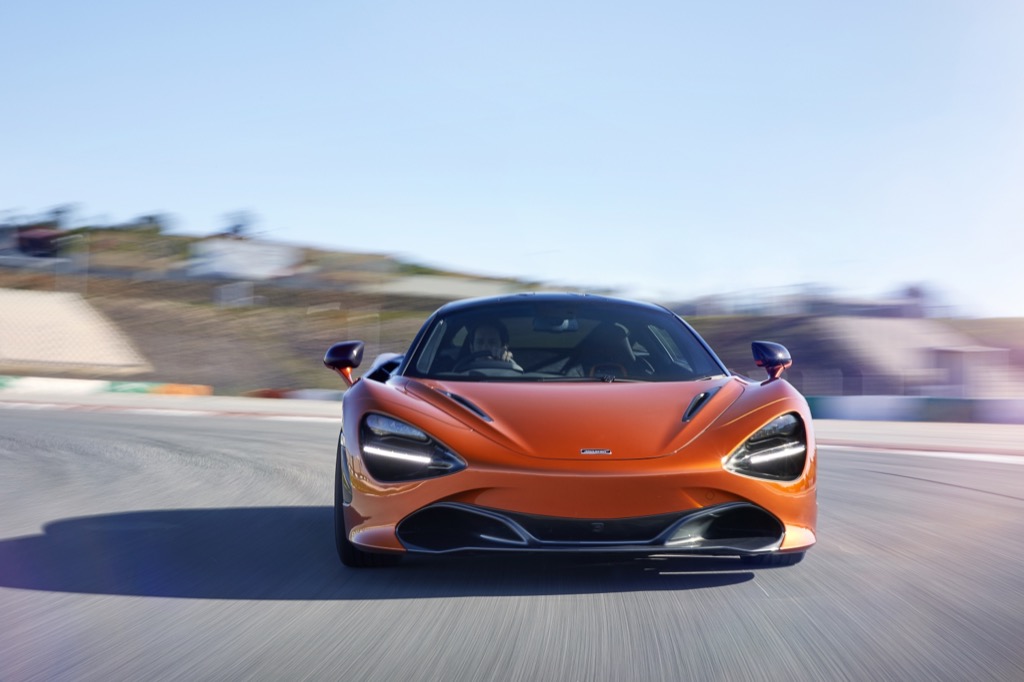 Propelled by a twin-turbo 4.0 liter mid-engine V8, the 720S is notable for exceptional torsional rigidity and power-to-weight ratio, with 710 horses allotted to less than 3,000 pounds of mass. The fighter jet-inspired cockpit lacks some of the visual drama found in Italian rivals, though in terms of function, it is perfection. On real world streets, the 720S is remarkably composed for a supercar, requiring no compromises other than the usual paranoia of low ground-clearance hazards. The coupe launches in 2017, with an open-top roadster due in 2018. MSRP expected to be around $288,845. 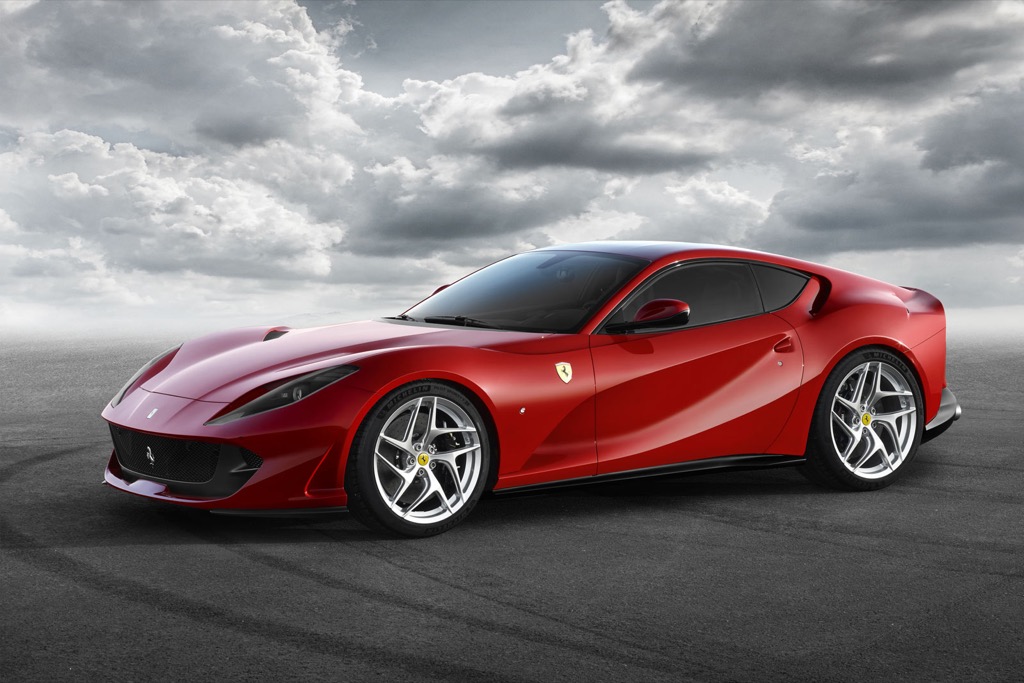 As the name implies, this Ferrari is super fast, hitting 60mph from a standstill in about the time it took to read this sentence. It has 800 horsepower, 12 cylinders, and a top speed of 211 mph. Perhaps most importantly, the front-engine 812 is a graceful, powerful road car in the tradition of the legendary Ferrari Daytona 365 GTB/4 grand tourer from the early 1970s. Unlike the Daytona, universally loved for its immaculate, understated body, the 812's looks are somewhat polarizing. Those flamboyant curves and slashes, beautiful to this eye, are there to create maximum downforce at sustained high speeds, technology brought to bear from Ferrari's F1 racing experience. As tradition mandates, the big Italian coupe has the beating heart of a naturally aspirated V-12, its most powerful ever, perfect for long-legged cross-continent jaunts. Priced to sell at $315,000. And for more insanely fast cars, check out the 20 celebrities that have supercars stocked in their garages.