Why Is the Passenger Side of the Car Called "Shotgun"?

The practice of calling the best seat in the car has a origin story with real firepower.

Everybody's got their own rules when it comes to their cars—who can touch the radio, AC versus open windows, et cetera—but the one rule we've all universally accepted as irrefutable is "calling shotgun." The first person to shout out "shotgun" has dibs on the passenger side front seat. It's a time honored tradition, and there's even a "Shotgun Rules" website devoted to the minutiae of how to correctly call shotgun.

While we all agree that shotgun is the law of the land, we don't usually question why. Wouldn't it make more sense to shout "front seat," since that's more technically accurate? Why "shotgun"? If you guessed that the origins came from the Old West, you'd be kinda correct. Back in the 1880s and '90s, when banks like Wells Fargo needed to transport cash or valuables across the plains with stagecoaches, they needed somebody to protect all that loot from thieves. So they hired scary-looking dudes called "shotgun messengers," whose only job was to look threatening and, when necessary, kill anybody who tried to pillage their delivery. "He generally sat at the right of the driver because, assuming he was right handed, it would have been easier to handle the weapon," says W.C. Jameson, the author of several bestselling books about the Old West, like Billy the Kid: Beyond the Grave.

A 1891 story in the Iowa newspaper The Oxford Mirror puts it more colorfully: "Of all the devices and inventions for the protection of treasure and circumvention of the road agent, the only one that has stood the test of time and experience is a big, ugly-tempered man with a sawed-off shotgun on the box." 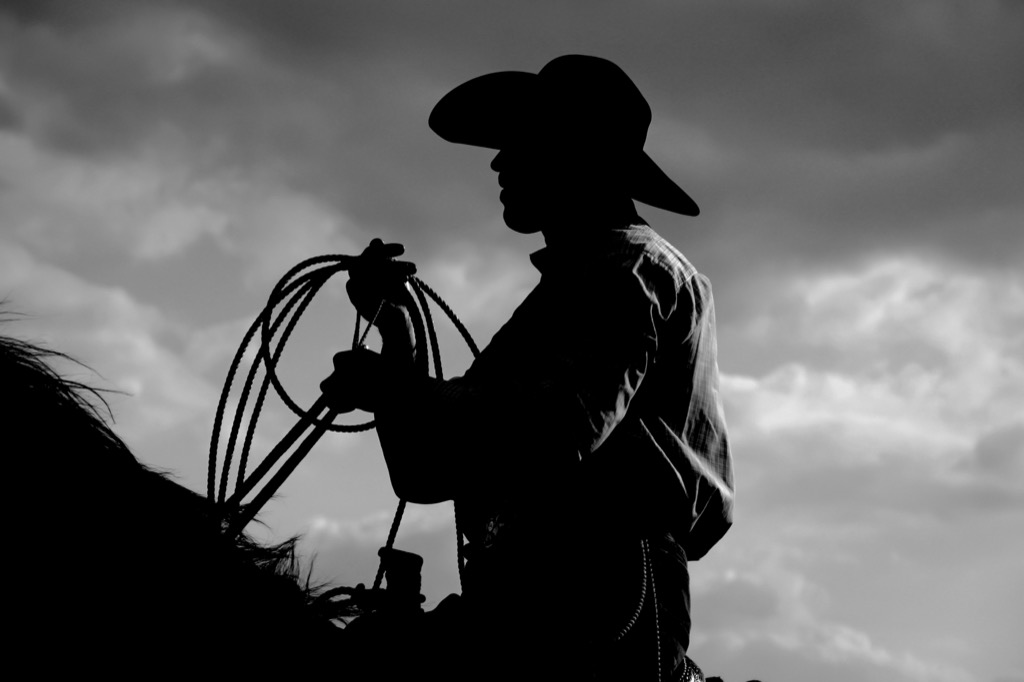 But here's the interesting part. Shotgun messengers, and those who wrote about them, never used the term "riding shotgun." That particular idiom didn't pop up until much later, ironically well past the point when "riding shotgun" was an actual job that cowboys were paid to do.

The earliest known reference was in a Utah newspaper, the Ogden Examiner, which published a story in 1919 with the headline "Ross Will Again Ride Shotgun on Old Stage Coach" —Ross being A.Y. Ross, a famous old shotgun messenger with a reputation as a badass, who once took on five stagecoach robbers all by himself, shooting them down in a hail of bullets to successfully defend $80,000 in gold bunion. Like we said, a badass.

"Riding shotgun" as a phrase that cowboys use, even though they actually didn't, became a popular trope in movie Westerns and cowboy fiction from the 20th century, the most memorable being John Wayne's 1939 classic Stagecoach, in which Marshal Curly Wilcox (played by George Bancroft) proclaims, "I'm going to Lordsburg with Buck. I'm gonna ride shotgun."

So how'd we go from shotgun messengers with real guns who never said "riding shotgun," to movie actors in cowboy hats brandishing fake guns saying "riding shotgun," to modern day automobile passengers without any weapons (we hope) competing to "ride shotgun"? Nobody knows for sure where and when "shotgun" was first shouted to claim a passenger's seat, or how it evolved into an unspoken national pastime. But we do know that by 1980, it was a common enough phrase that The (London) Times used it in a story without explanation, writing "It was quite by chance that The Times found itself riding shotgun for the Red Army."