10 Ways to Speed Without Getting a Ticket

Dodge the cops? Yes, there's an app for that.

Pushing the speed limit is, by definition, risky. Which means, of course, that men everywhere are invariably going to do it. (As will many women.) We get it: There's a thrill from putting the pedal to the metal that you simply cannot find anywhere else. But speeding citations are serious business, as they leave a stain on your driving record that affects your ability to rent cars when traveling and will spike your insurance rates at home. And you know what? You can get slapped with one on all streets and roads, not just the interstate. So be aware. Here's what you need to know to avoid the traps, maintain a clean record, and, most importantly, stay safe. And once you master these, be sure to check out the 10 tricks smart men swear by to master the road. 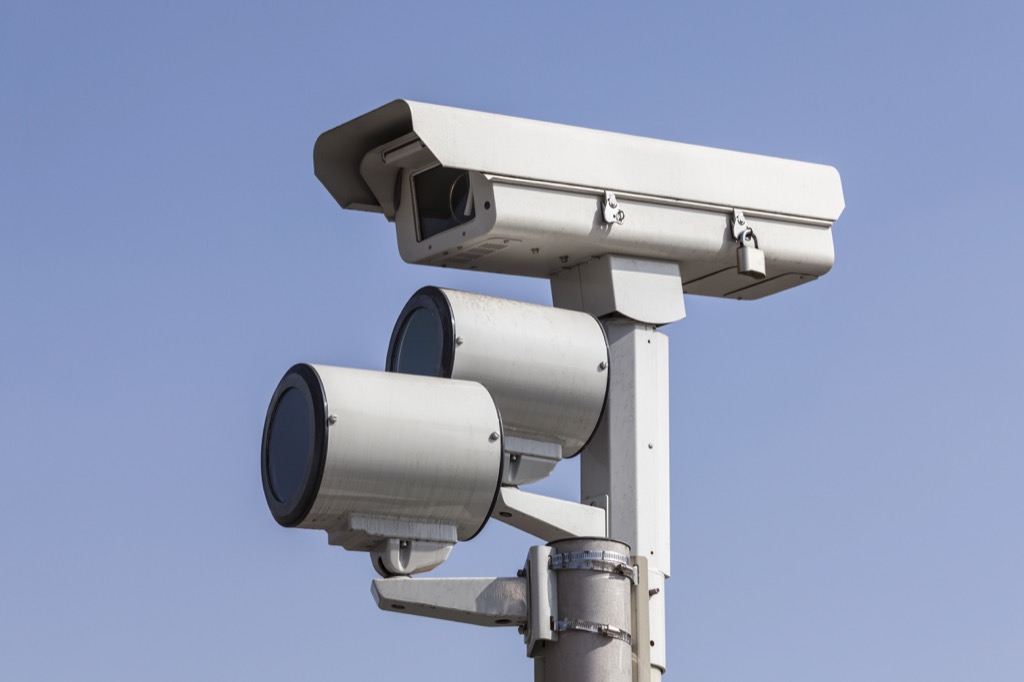 Most drivers don't realize that they are more likely to get snared by speed traps on a busy commercial street than on a freeway. Cops more rigorously enforce speeds on city streets where the low threshold for infractions means that a mere 5 to 8 miles per hour over the limit can mean a summons. In fact, during the last recession, many municipalities mandated aggressive, zero-tolerance traffic enforcement to make up for lost tax revenue. It worked so well that many towns have kept these policies in effect, even lowering posted limits to ensnare more unwitting drivers. Town and city police don't patrol highways and freeways, which is the jurisdiction of state troopers who do not answer to local authorities. In addition to over-zealous municipal cops, traffic cameras are increasingly more common and sophisticated. In the UK, for example, speed cameras have become so prevalent that you no longer can even plead your case to an officer. You simply receive a summons in the mail with a photo of your car and license tag. And to make sure you're driving through the city streets in style, here are the most prestigious sedans you can own.ae0fcc31ae342fd3a1346ebb1f342fcb 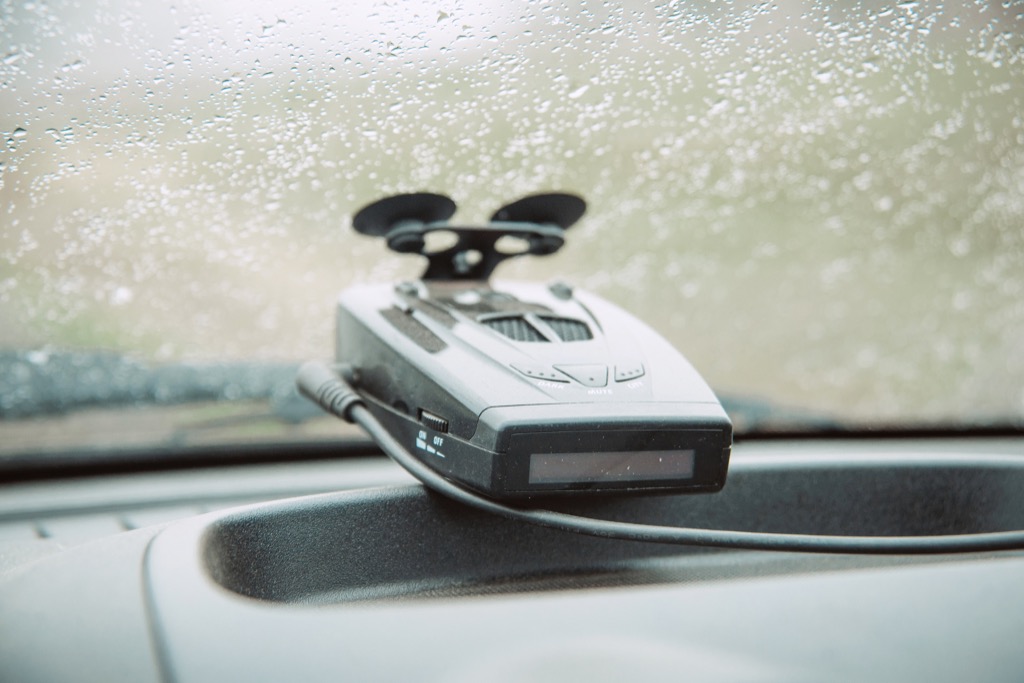 A laser detector is more effective on city streets than highways since it makes you aware by warning of police presence whether or not you're being clocked. In a 25mph zone, for instance, it's effortless to creep up over 30 without realizing. Spring for a hard-wired system like the K40 that conceals the receiver under the bumper or behind the grille, rather than hanging off your windshield like a scarlet letter. Laser detectors, unlike jammers, are legal in nearly all 50 states, with the exception of Virginia and the District of Columbia where merely being in possession of one is seriously frowned upon and can land you a summons. In California and Minnesota, it's illegal to mount them on the inside of the windshield, so a proper installation is your only option in those states. 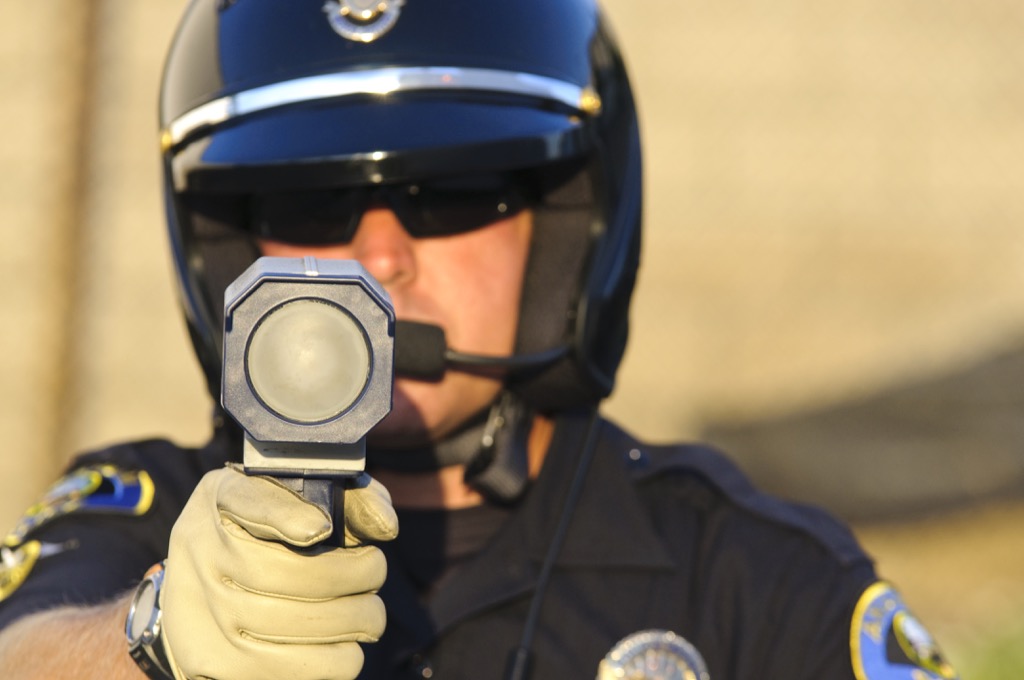 Local police departments generally rely on the K or Ka band for measuring vehicle velocity, The signal is always on, sending a frequency which your radar unit receives, providing a warning as you come within range. (Turn off the X-band, which virtually no department uses anymore, to avoid the detector being tripped by every automatic door you pass.) On highways and expressways, state patrols use either Lidar or laser instant-on systems that lock onto you without warning. You'll know you've been hit only after the fact, by which time it's too late to react. The laser alert can also be triggered by deflection from a nearby car, sparing you with a wakeup call. So while a laser detector makes you no less vulnerable on the interstate, it can alert you to the presence of cops even when you're driving the posted limit, which is helpful. Also, if you enjoy cruising down the freeway, do so with the sun shining down on you in one of these 10 wondrous droptops.

4
Learn the Contours of the Road 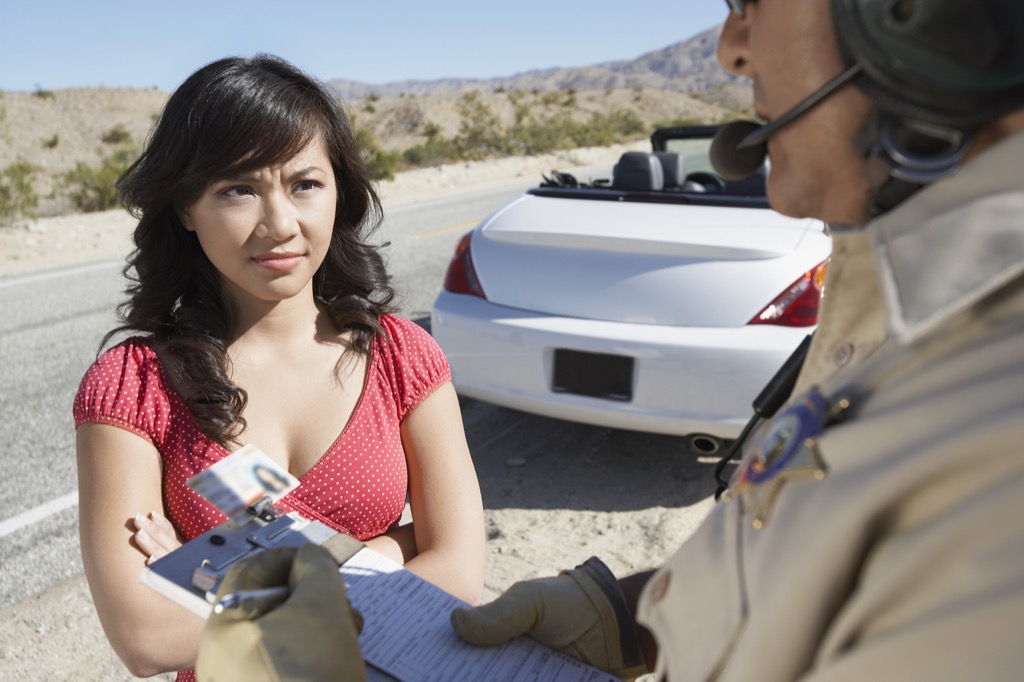 If you drive the same route every day you may have noticed some obvious spots, like behind an overpass support, where patrol cars hide to monitor traffic. But there are also less obvious places, like when cresting a hill. It's a common tactic for cops to lie in wait just over a hill where they are impossible to spot from a distance, suddenly exploding into view as you fly over the grade. Speeding in that instance is a rookie move that will cost dearly. With no time to react your instinct is to brake hard, confirming to the officer that you were quite aware of your excessive speed. There's no talking your way out of that one.

What's more, in some states 20 over the limit—say, 85 in a 65 zone—automatically registers a reckless driving citation on top of the speeding infraction. And if the officer's had a bad day—or just doesn't like your smug ass—it is his discretion to make an arrest on the spot for the reckless charge. Your costs now have now been ratcheted up to include towing, pound fees, the posting of bond, and likely legal representation, plus even more punitive points on your license. If you're tempted to take a chance on speed now and then, at least choose your moment wisely. Whether familiar with the road or not, it's smart to recognize all the places along the route where you are most vulnerable. Now, check out the single best car you can buy for under $100,000. The most popular traffic app, Speed Cameras & Traffic by Sygic, though not foolproof, adds a measure of protection when combined with other common sense tactics. Loaded with features including alerts for speed cameras, red light cameras, and speed traps, it also notifies you of new speed limit changes on your route, plus many other useful tools. Users add to its database by reporting police radar traps they've encountered. Just be careful: if you find yourself addicted to your phone, learn how smart men curb their smartphone addictions.

6
Go with the Flow 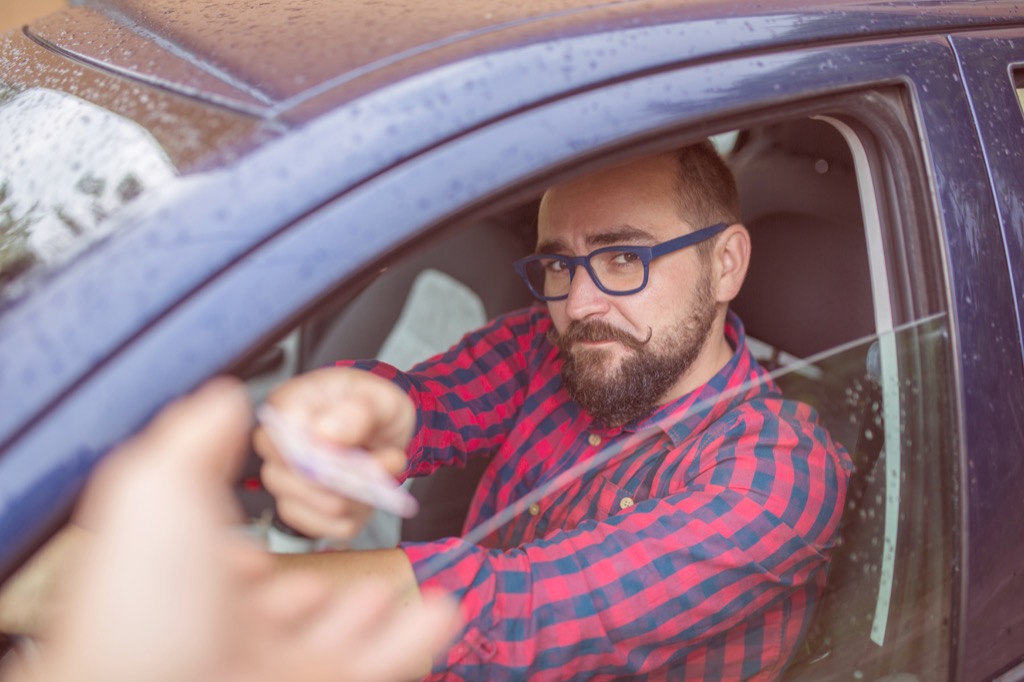 When all traffic is averaging ten to 15 over the limit—often the case on busy highways at peak periods—cops will overlook speeding in deference to keeping the flow moving. Don't stick out with aggressive lane-changing and other cop-baiting moves. Keep it in check by staying cool under pressure and you'll improve the odds of getting where you're going uneventfully. Getting your speedfreak on during off-peak times before midnight or early morning is not advisable either since fast drivers easily stand out from slower traffic that is still in evidence at those hours. The only time to safely push the envelope—assuming you haven't been drinking—is in the hours between midnight and 6 am, when police are unlikely to set up speed traps when traffic is too light to warrant the effort. That, of course, depends on where you live, so use discretion. If you're in the mood to buck this advice, however, stick out with one of the 10 boldest new luxury vehicles on the road. 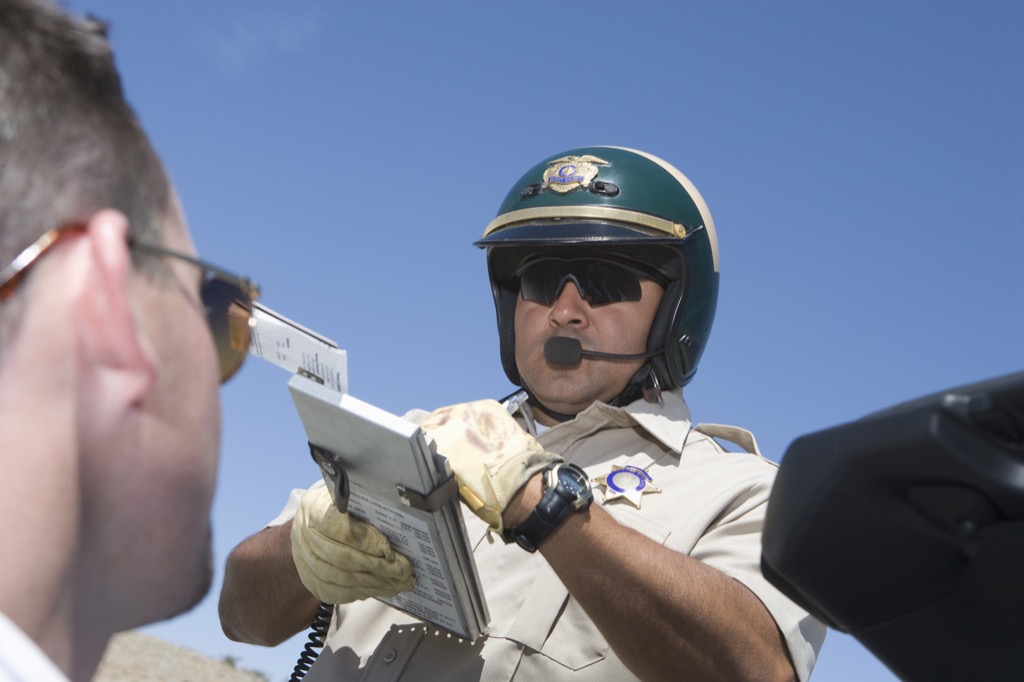 When you drive a high-performance car, the itch to let it rip can be hard to resist. Certain expressway on-ramps can give you a bit of space—sometimes an eighth of a mile or more—to kick it down for a brief head-snapping interlude. As you approach the merge, moderate your speed to the traffic flow and anticipate the best space to slot into with the least possible disruption to oncoming traffic. When done right, entering the flow at the correct cruising speed is far safer for all than the hesitation many drivers exhibit when entering on-ramps. Merging into the right lane slower than the cars traveling in that lane causes them to adjust and course-correct abruptly, forcing traffic into the center or left lanes, affecting drivers in that stream in a disruptive ripple effect. When, despite all caution, you creep over the posted limit and get pulled over, remember these important rules for dealing with the officer. 1) Do not reach for your glovebox to retrieve your registration or fiddle around where your hands are out of view. Pull over and keep your hands high on the wheel where the officer can see them before he exits his vehicle. This assures him it's safe to approach and that you've got the good sense and courtesy to make his difficult job easier. When asked for your registration, tell him that you will need to reach into wherever it's kept and don't initiate the move until he says OK. 2) Don't bullshit him, especially when he's got you dead to rights. Insulting an officer with a lame excuse only incentivizes him to make your life miserable. Fess up and apologize for your poor judgment. If you were genuinely unaware you were speeding, explain that you were stressed out and lost track of how fast you were going. But don't attempt to dispute it by inferring he's lying or mistaken. A reasonable, polite, and respectful encounter can often result in being forgiven with a mere warning. 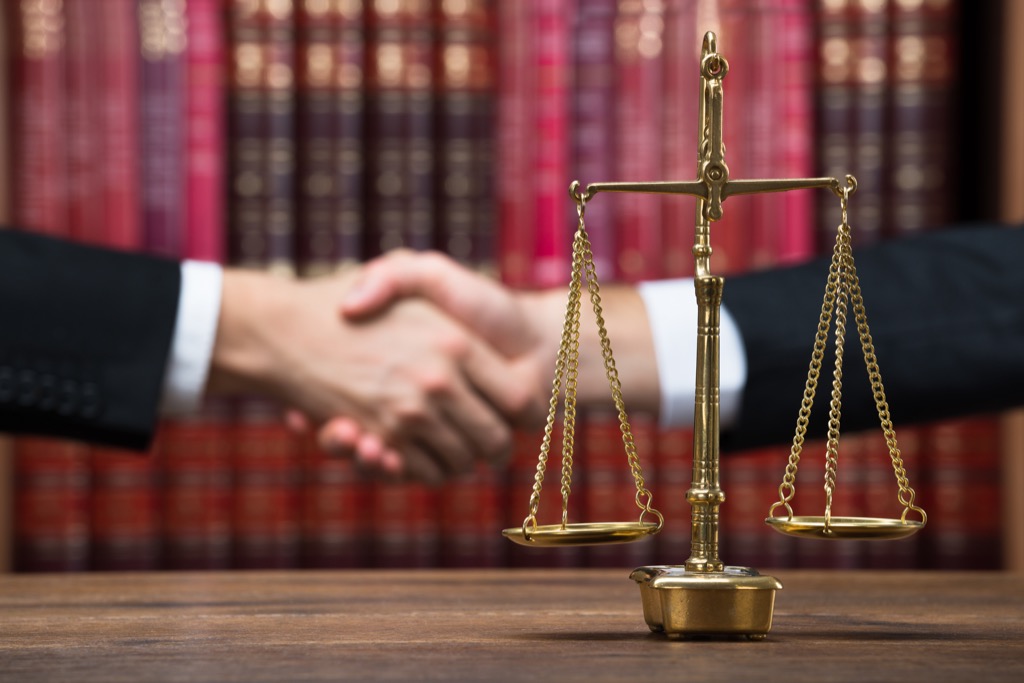 Speeding tickets negatively affect your insurance premiums for several years. You have the chance of at least reducing the fine, the severity of the infraction, or both by pleading not guilty. In many jurisdictions cases are thrown out if the officer in question does not show up to court to present his evidence. Clearly, cops can't appear for every ticket that is contested, so your chances of it being tossed out are reasonably good. And by showing the determination to fight it, local prosecutors will often rather make a ruling of Not Responsible than waste time over a seemingly trivial matter. Or they may offer to plea the summons down to a fine only with no points. If, however, you are a serial offender, consider an attorney in your state that specializes in traffic law. You will be amazed at just how flexible the judicial system can be for those who know it from the inside. Not an inexpensive solution by any means, but if you just can't drive 55, it's the cost of doing business. And it beats commuting by bus.

Experienced racing drivers slake their thirst for speed on the track, a controlled environment where everyone adheres to the established rules, unlike the driving public. If you own a high-performance car and want to experience it fully, take it to a private course. Tracks and road courses all over America and the world allow you to wind it out safely—and legally, exploring both your limits and that of your machine. Many speedways offer sport driving instruction (highly recommended, often mandatory) for non-professionals, or you can take advantage of the many driving schools offered by the manufacturer of your high-performance car. The skills you learn on the track will make you a superior driver on the road.