Haul your gear in style with these big beasts.

Of all the passenger vehicles sold in the United States, a full sixty-two percent are trucks. Let that sink in for a moment. Could it be that well over half of American drivers are cattlemen, contractors, or landscapers? Probably not. The simple answer is that trucks are just damn cool. And functional if you have gear to haul, like a boat. Slide behind the wheel of a truck and you become one with the mythical, independent American ideal. A powerful tonic that's only gathering in strength, with new entrants in the segment ready to take on the Detroit giants. Here are the best of the legacy brands, along with some exciting new challengers. But if you prefer a smaller ride, here are the best sedans out there. 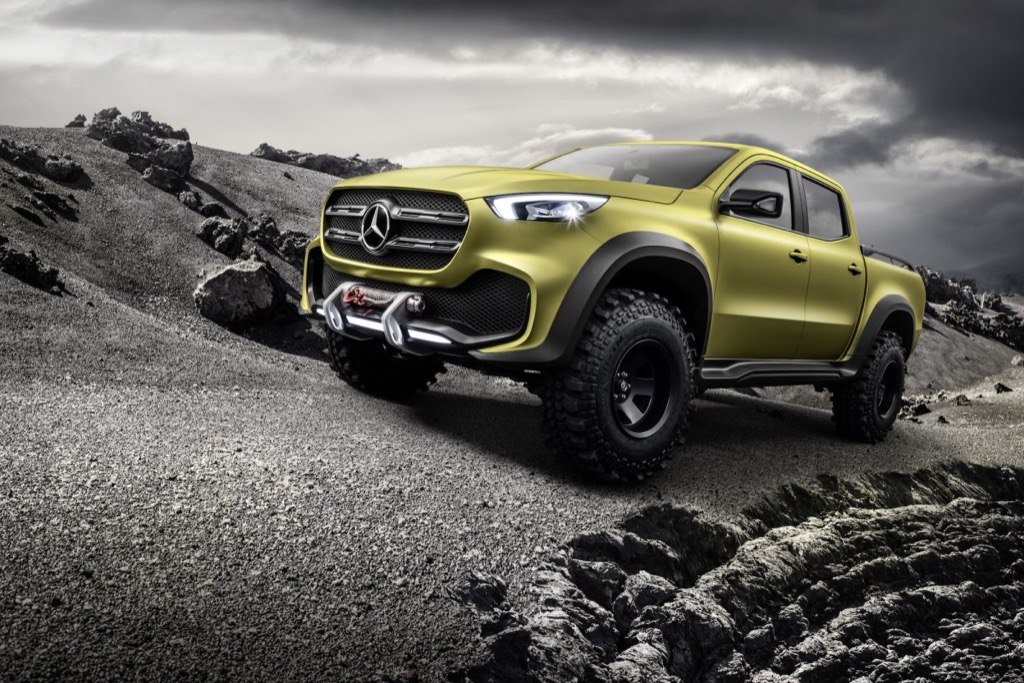 Is it odd for a name like Mercedes, known for luxury and sports cars, to dip into the pickup segment? Not at all. Because in most of the world, the tri-star is considered just another full-line automotive conglomerate like General Motors, building trucks, buses, and marine engines in addition to their fine cars. The better question may be what took them so long to ignore the red-hot pickup market.

Making up for lost time, the brawny new X-Class should be impressive, with power from a turbocharged diesel V-6 engine paired with a 4Matic permanent all-wheel-drive setup. Plus, a Jeep-like transfer case with a reduction gear and two differential locks for rock crawling and serious outback trails. Expect a proper truck chassis with ladder frame setup (remember, Mercedes once owned Chrysler and Jeep). And, of course, the X-Class will feature all M-B's latest tech in driver assistance, safety, and connectivity. It should be a screamer, with a price to match. Look for the X-Class to begin production in 3Q 2017. Benz lovers, you should also check out the coolest Mercedes' of all time.

As the name attests, this is the summit within GM truck hierarchy. Essentially identical to sibling Chevy Silverado, Sierra is considered more upscale, with Denali and Ultimate being higher orders of magnitude for these handsome haulers. Twenty-two inch dubs rank style ahead of function, though the standard 6.2-liter EcoTec3 V-8, rated at 420 horsepower and 420 pound-feet of torque means business. Up to 9,400 pounds of towing capacity makes full-size GMC and Chevy trucks class-leaders over crosstown rivals Ram and Ford, but cede top honors in interior appointments and ride comfort. Both lines possess remarkable road composure despite their imposing heft, and deliver car-like acceleration. Pricing starts at around $60,000 for the tricked-out Denali. You big car lovers should also check out the best SUVs on the market. 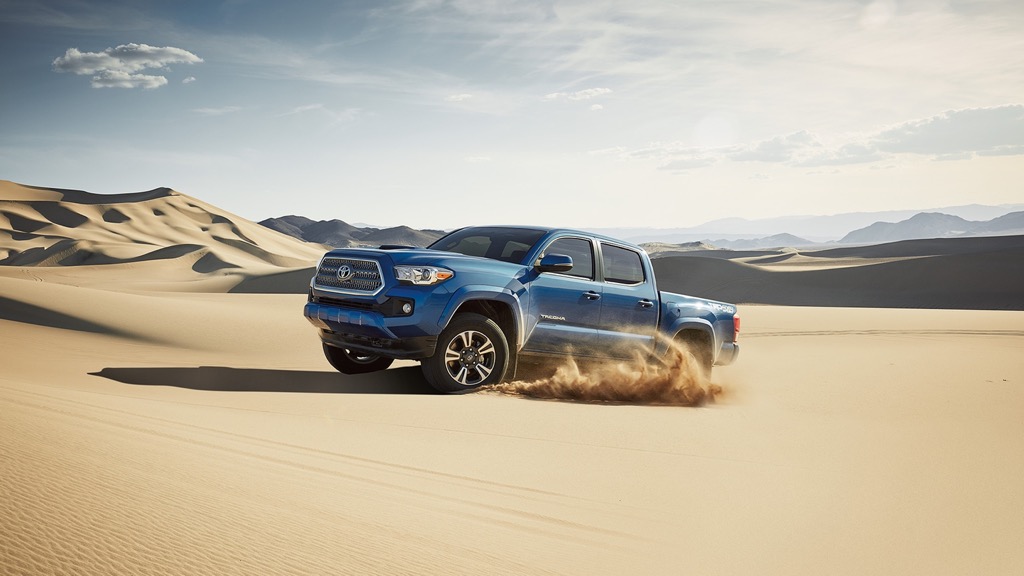 Long committed to the compact truck market, the Tacoma is a capable off-road weekend warrior that's livable as a daily driver. Equipped with four-wheel drive and a two-speed transfer case with locking rear differential, power comes courtesy of a 278-hp V-6 paired to a standard six-speed manual transmission (the preferred gearbox over the automatic option). The five-mode Multi-Terrain Select traction-control settings dials in whatever Mother Earth throws at you. Towing capacity in the top-range TRD Pro is a respectable 6400 pounds. Toyota also makes a pretty good sports car. 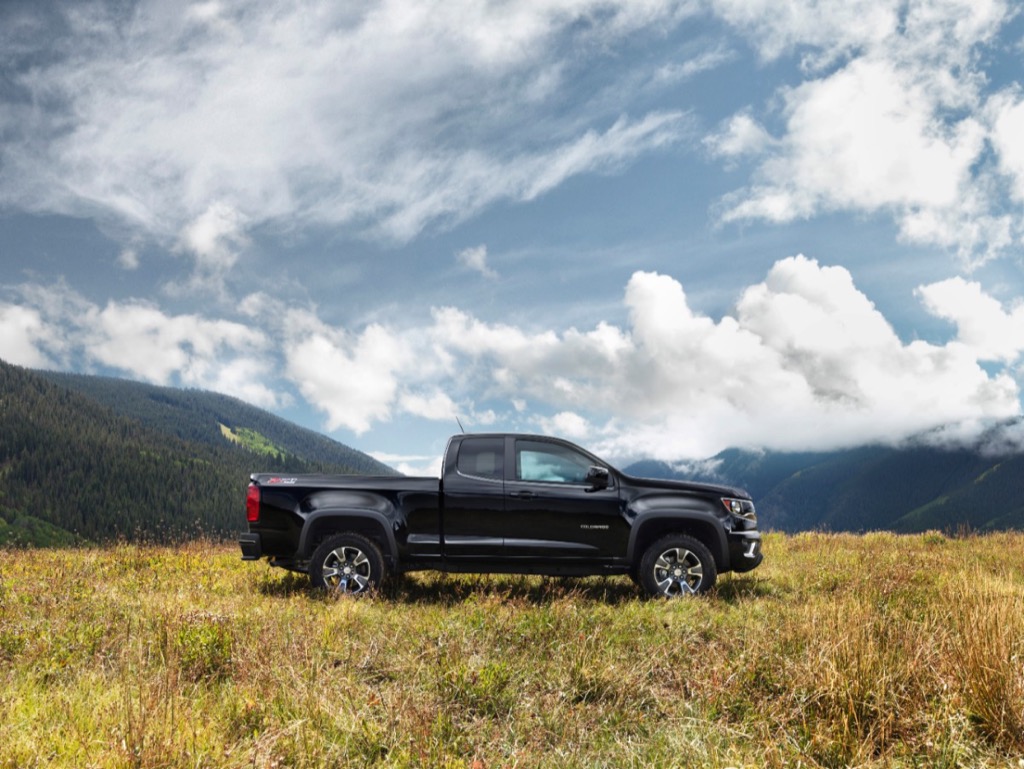 Tacoma's dominance in the compact truck segment met with some headwinds upon the introduction of GM's power duo (which, in turn, will be challenged by the upcoming return of the Ford Ranger). Available gasoline engines excel at either fuel efficiency or power, with the turbodiesel option delivering on both.

Plus, it's got the highest compact truck tow rating at a whopping 7,700 pounds. A grand slam from day one, the Colorado/Canyon are lauded for quality and value. Prices range from a very reasonable base price of $20,000 to upwards of $45,000 for the Denali 4-door Crew Cab with 308 hp V6 with 8-speed automatic. On deck: An all-new off-road-focused Colorado ZR2 to go head-to-head with the Tacoma TRD. Speaking of Chevy, they make one of the best cars you can buy for under $100,000. 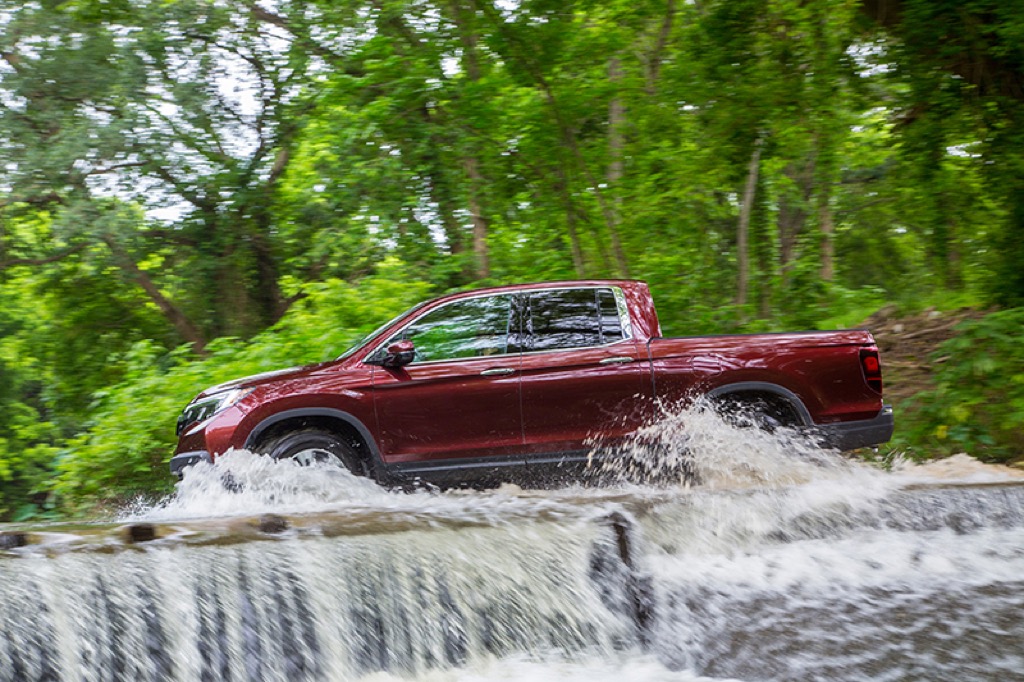 The non-conformist of this bunch, the Ridgeline deserves consideration for those who only occasionally require the utility of a truck but prize the driving characteristics of a car. It's the only truck that's based on a unibody car platform, the same that underpins the next-gen Honda Odyssey minivan and the current Pilot crossover.

Well-rounded and capable, with one of the best and roomiest interiors, the Ridgeline could be described as a car-truck hybrid; not the best of either, though a compelling package for the man whose masculinity is not in question. Safety ratings are a cut above its classmates. Available in front- or all-wheel-drive, power comes from Honda's stout 3.5 liter V-6, with 280 hp/262 lb-ft torque driving a six-speed automatic. 5000 pound towing capacity for AWD models. Prices range from $29,475 to over $40,000. And for more great car options, check out these high-performance wagons for real-life adventurers. 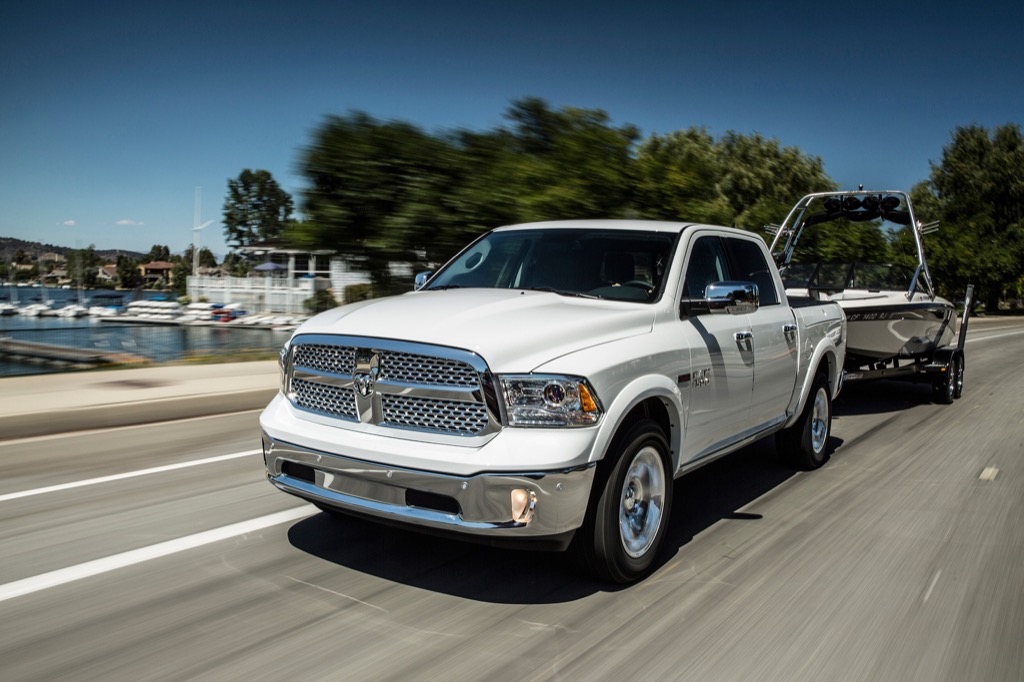 With over three dozen possible configurations, the Ram 1500 is one fine-looking truck. Despite featuring the most dated powertrain lineup in its competitive set, Ram of late has been outselling Silverado, upsetting the natural order where Chevy has forever placed second to the F-150, with Ram (formerly Dodge) pulling up the rear. Chalk it up to Ram's better advertising? Partly, sure. But it's hard to dismiss Ram's better ride quality (especially with the optional air suspension), its wide array of engines, its well-appointed interiors, and load capability on par with anyone.

Until recently it also had the only diesel option, though at an eye-watering $4,000 premium. (With Ford and Nissan now offering diesels, Ram would be wise to revise its battle plan.) Speaking of which, despite its compact 3.0 liters, the EcoDiesel V6 benches an impressive 10 lb-ft more than the 5.7 liter V8 at nearly twice the size. The times they are a-changin'. Ram boasts a top tow-rating of 10,640 pounds, which places it clearly among the elite in this group. Prices start at $26,495 to well north of $60k. Points deduction: Ram's response to Ford's Raptor, the new 1500 Rebel 4×4 iteration, falls short, relying on ornamentation over substance. 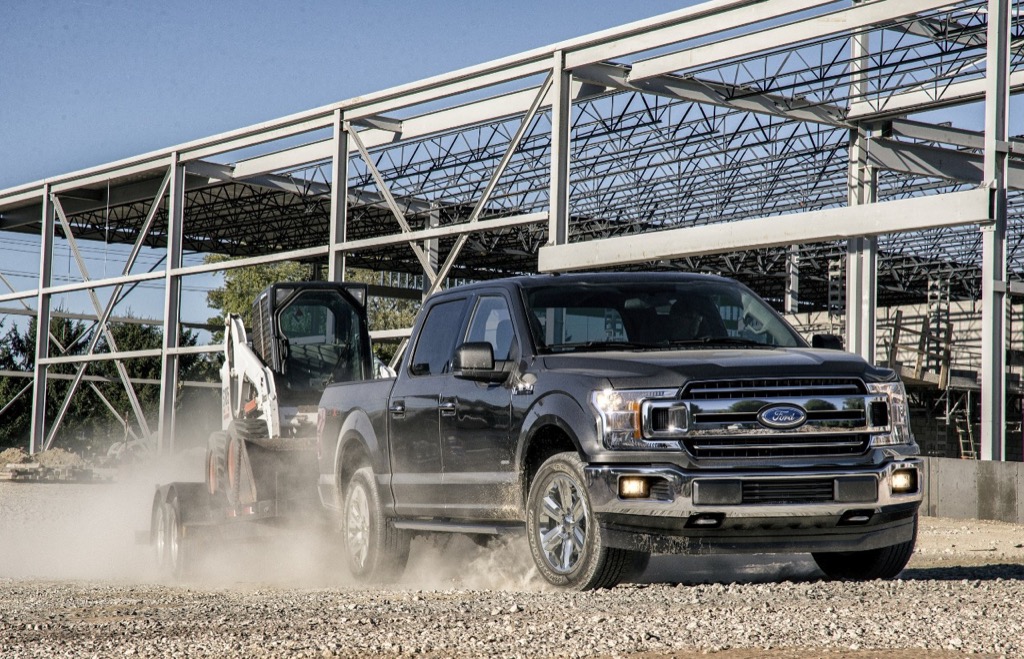 F-Series Ford Trucks are into the 13th generation since 1948, having run the table for 40 straight years as the number-one selling truck in America. And 35 years as the best-selling vehicle of any type. Ford claims it sells an F-150 every minute (though Chevy and GMC combined outsell it).

As truck enthusiasts are fully aware, Ford had risked its hegemony with the recent high-stakes switch to aluminum bodies and embrace of small-displacement six-cylinder Eco-Boost engines. Don't mess with our trucks, cried the naysayers, it's un-American! Ford proved them wrong and, for good measure, laid rubber on their egg-strewn faces.

F-Series' dominance remains assured and the innovations keep coming. With too many model trim levels and variations to list here, just know that Ford's light-duty trucks are among the best-engineered vehicles—of any type—in the world today. 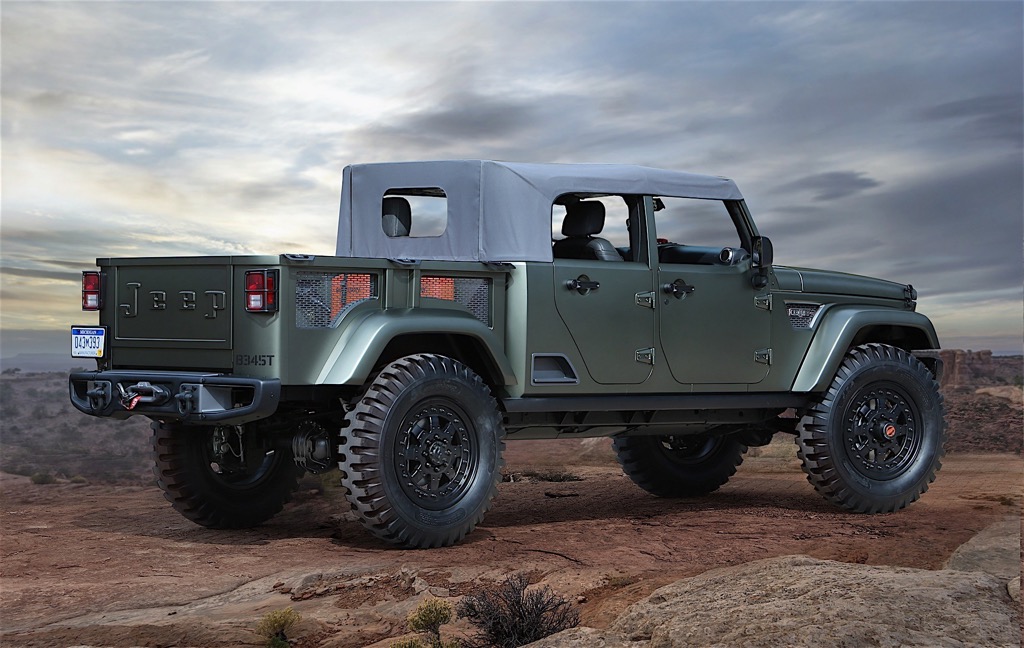 Expected in late 2017, we will see the return of a pickup version to the venerable Wrangler line. Set to be the first factory-built Jeep with a truck bed since 1992, pent-up demand is ready to burst.

Expect power to come from Wrangler's standard 3.6 liter V6, along with a 2.0 liter turbo four option derived from Fiat, though hopefully tuned for more grunt than the one that outfits the Cherokee. The anticipated diesel option is probably shelved for the time-being, given Fiat-Chrysler's entanglement with the EPA over alleged emissions rigging. Wrangler Nation have been clamoring for a pickup for eons, so its debut—now confirmed—is a BFD. Without a doubt it will be the absolute coolest truck in existence the day it hits. But, wait . . . on yonder approaches a new Ford Bronco. Things are about to get interesting. Jeep also makes a wonderful droptop. 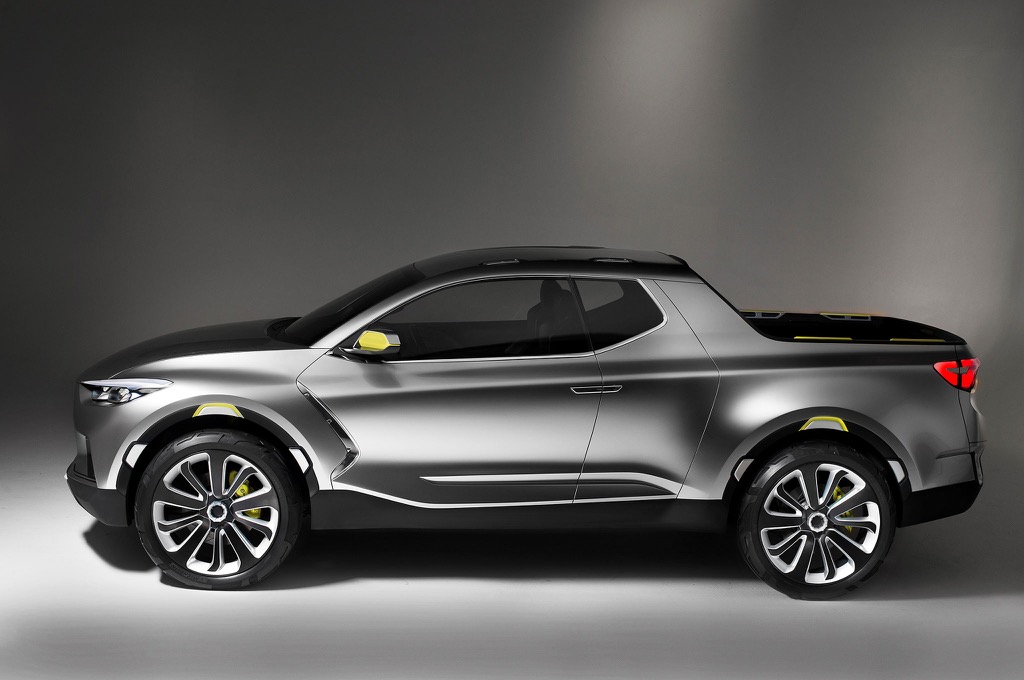 This concept earns rank for the sheer audacity of challenging the status quo. I'll go out on a limb and forecast a welcome reception for this radical new truck interpretation. The Santa Cruz is expected to demonstrate a level of intelligent versatility heretofore unknown in truck-land, like an expandable bed that keeps overall vehicle dimensions compact when that's all you need. Hmmm. Fresh thinking + stunning package = a whole new group of truck buyers. I smell a winner. The Santa Cruz is cleared for takeoff, arriving near you autumn 2018. 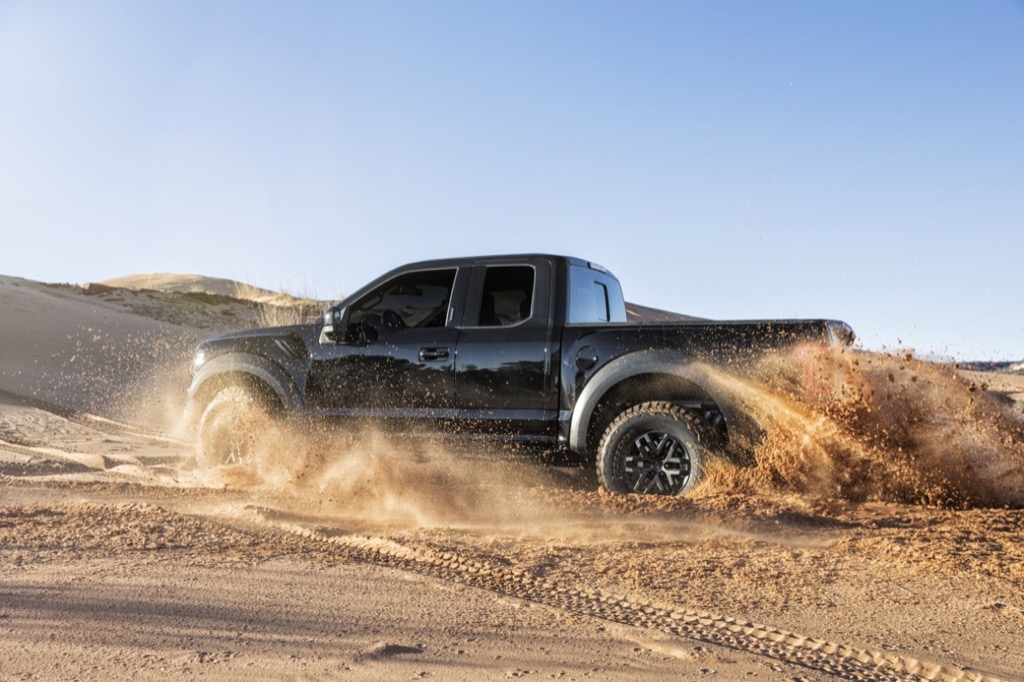 Born of the venerable F-150 gene pool, the Raptor is a wholly different animal that carves its own trajectory. Nothing currently orbiting the truck universe comes close, though the aforementioned Mercedes X-Class has Raptor in its scopes. With the beating heart of a twin-turbo 3.5 liter, 450 horsepower aluminum block, direct fuel-injection V6 mated to a 10-speed slushbox riding on BFGoodrich All-Terrain T/A tires, Raptors are predisposed to on- and off-road exhibitionism. Countering all that machismo is a perfectly-mannered Home Depot habitué that won't object to handling mundane chores as well as any pickup. Capable of towing up to 8,000 pounds, available in Super Cab and SuperCrew Cab configurations, the Raptor starts at $49,265.