Ditch your cologne and reach for a stalk of celery.

Got a big date tonight? By all means, exercise, take a shower, throw on a splash of cologne or perfume, and wear some fresh, clean clothes. Be advised, however, that you could still be missing out on the most important thing for smelling—and tasting—your very best.

I'm talking about your diet. The truth is that a lot of the smells and tastes that current or potential partners will find either revolting or appealing are not actually on you but are actually emanating from deep within you. That's right: your effect on your partners' olfactory system has more about what you're putting into your body than you ever imagined, and eating the right foods can mean that difference between turning someone on or grossing someone out.

Since we'd rather you turn them on, we spoke with a slew of nutritionists to learn about the foods that make you smell good. And remember: smelling great isn't the only thing that should be on your date-night checklist. 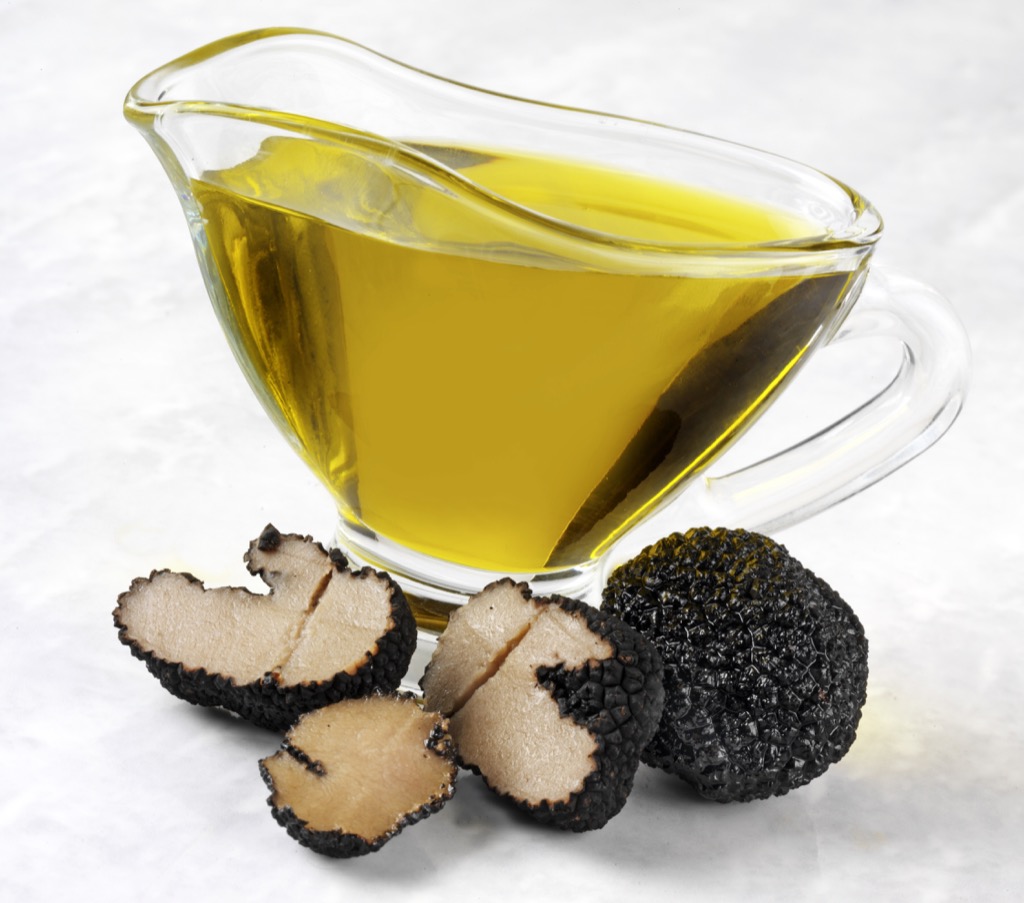 Fact one: Female pigs are especially affected by androstenone and androstenol. These two pheromones are present in boars' breath and an ovulating sow only needs to get a whiff of it before she's ready for action and presenting her lady parts.

Fact two: for centuries pigs have been used to find truffles. In 1981, German researchers discovered the link between these facts when they found that androstenol is produced by many varieties of the subterranean fungus considered a delicacy. Before you think about carrying truffles around in your pockets, you ought to know that they are expensive—selling for about $100 per ounce. The good news is that truffle oil—which is a lot less expensive—also contains the same pheromones.

Give it a whirl yourself, but be warned: 25 percent of people can't detect androstenone, and 40 percent of people are too sensitive to androstenol and find it revolting. That leaves over a third of people (35 percent) who may find you wildly attractive thanks to this funky smelling stuff. While we're on the subject of food, here are some painless ways to upgrade your diet.

Interestingly, very little scientific study has gone into the effect of different foods on the taste of semen. Anecdotal evidence about how the consumption of pineapple makes male ejaculate taste sweeter or more palatable abounds on the Internet however. What we can say with some degree of certainty is that what you eat will, to varying extents, affect the way you taste and smell. Pineapple is sweet and delicious so if you're looking to run an experiment of your own, consuming might be a better place to start than say, Gruyere. Speaking of what to eat before a date, here are some foods that will work wonders for your libido.ae0fcc31ae342fd3a1346ebb1f342fcb

There's an enduring myth about celery and it goes something like this: celery is a negative calorie food because it contains fewer calories than it takes to digest. That's not really true. What is true about Apium graveolens (if we're being fancy) is that every stalk is packed with androstenone and androstenol, the pheromones some female mammals go crazy for. Maybe it's time to start thinking of "ants on a log" as an aphrodisiac and not just a kiddie snack.

"When you chew a stalk of celery, you release androstenone and androstenol odor molecules into your mouth. They then travel up the back of your throat to your nose," says Alan Hirsch, MD, author of Scentsational Sex. "Once there, the pheromones boost your arousal, turning you on and causing your body to send off scents and signals that make you more desirable to women."

The best thing about this wonder of nature is that there's very little planning required According to Hirsch, the pheromones are released immediately. And for more dating advice, here are the sexiest things you can say to a woman on a first date. 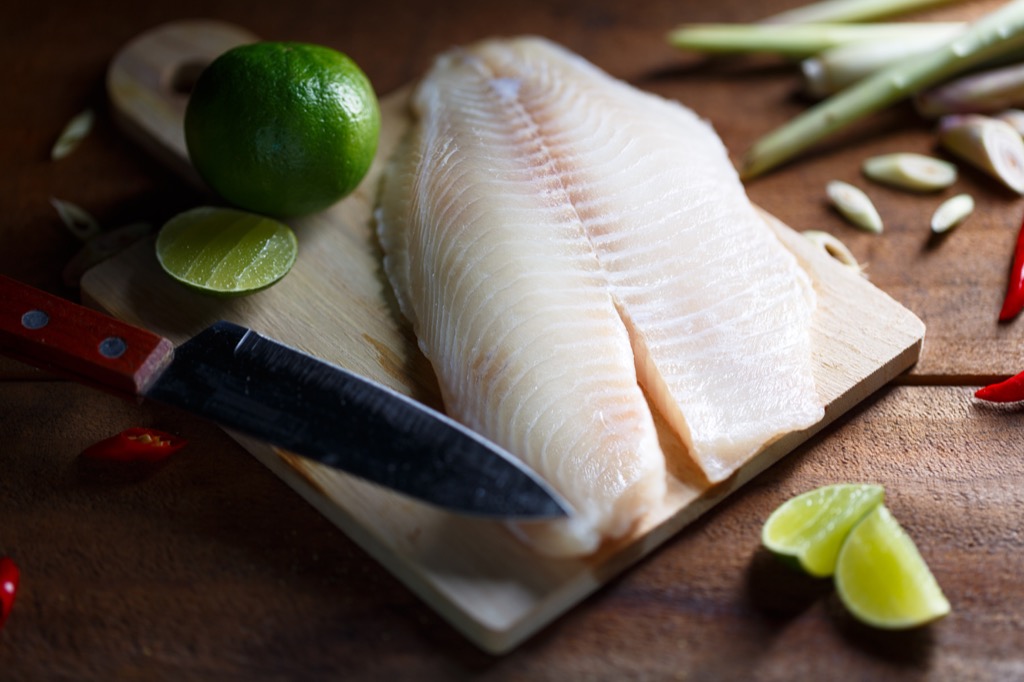 As you're no doubt aware, cod, halibut, and tilapia are all types of white fish. You probably also know that, like house guests, fish begin to smell after a few days. It may surprise you to learn then that consuming white fish rather than red meat may be a factor in getting people to want to cuddle up to you.

"Eating white fish doesn't make you smell better, but it doesn't make you smell," says Jim White, RD, ACSM owner of Jim White Fitness & Nutrition Studios. White adds that in contrast, the breakdown of red meat may give off a body odor. His assertion is backed up by several studies, including one from the Czech Republic and published in the journal Chemical Senses that showed that red meat is associated with bad body odor. The same unpleasant odors are not released when the human body metabolizes fish, however. And we have a great recipe for a delicious halibut dinner here.

"Fresh herbs like parsley, basil, and mint can help mask bad breath with the strong oils that they contain," says Leah Kaufman, MS, RD, CDN of Leah Kaufman Nutrition. Kaufman explains that the strong oils contained within them help to overpower stinky scents like garlic and onions. "Try incorporating fresh herbs into your dinner or have a fruit salad with basil or mint for dessert to help combat the smells you may get from dinner," she says.

Sally Cram, DDS, a Washington, DC-based periodontist and spokesperson for the American Dental Association backs Kaufman up. "These herbs can act as a mouthwash to temporarily mask odors," she says. It's well worth remembering that chronic bad breath may be a sign of periodontal disease. Dr. Cram recommends seeing a dentist if the problem won't go away.

Probiotic yogurt is a bad-breath neutralizer. See, eating yogurt with live active cultures lowers the amount of odor-causing sulfite compounds in your alimentary canal that begins in your mouth. What's more, probiotic yogurts are a potent source of vitamin D, which fights mouth bacteria. In short, yogurt is a hedge against unwelcome odors from top to ahem, bottom.

"Probiotics are microorganisms that are similar to the bacteria that we naturally have in our stomachs," explains Kaufman. "The probiotics in foods such as yogurt help with digestion and excessive gas." As crop-dusting your date probably isn't going to be well received, having a little yogurt before you head out on the town might be worth considering….provided you're not lactose intolerant.