The Zodiac Sign Most Likely to Marry for Money, Astrologer Warns

Astrologers reveal which signs are looking for a little more than love.

Money plays a big part in any marriage. You split bills, file joint taxes, and probably even share a bank account. But for some it's a little more than that: Maybe someone just wants to feel financially comfortable, or perhaps they've been raised to say "I do" to someone who can provide the finer things in life.

If you're wondering why your significant other seems to always wait for you to pull your wallet out or why the person you went on a date with wouldn't stop talking about wanting a designer bag, astrology might be able to help. Read on to discover the six signs most likely to marry for money, from those who love a little luxury to those who want all expenses paid first and foremost.

If you know a Taurus, you're aware they're deeply into extravagance and they love the finer things in life. They can also be lazy about their goals, which makes them want to use other people to help them get to their end game. All of these qualities can lead to them marrying for money because they tend to be materialistic.

Forensic astrologer Valerie Evans describes Taureans as people who always need to be "surrounded by love and beauty" and search for "hedonism and physical pleasures." These folks are definitely relationship-focused, as they're "sensual and tactile, considering touch and taste the most important of all senses." But oftentimes, Taureans want to feel accepted by high society, which means they want a partner that won't remind them about any "mundane financial responsibilities."

Scorpios are famously sensual signs who are always on the hunt for a significant other. Scorpion energy is ambitious, which means they're always trying to better themselves in life. According to Evans, what motivates a Scorpio is "sex, money, real estate, secrets, and other people's assets," which make them eager to get to the altar "and guard their mate to the death." Once a Scorpio lands a partner, they're going to stay with them forever since their "hypnotic glance" won't let anyone look the other way.ae0fcc31ae342fd3a1346ebb1f342fcb

RELATED: This Is the Zodiac Sign Most Likely to Spy on Their Partners, Data Shows.

Leos are strong, born leaders who look for partners that are at the same level as them, which often means they want someone wealthy and powerful. Evans explains that Leo "means 'to play' and often represents a restless playboy who spends his time pursuing wealthy heiresses." Because it's such a powerful sign, it's easy for them to find affluent, important significant who match them. Note: Newly-engaged Jennifer Lopez, who has been married three times and has dated many successful men, is famously a Leo. 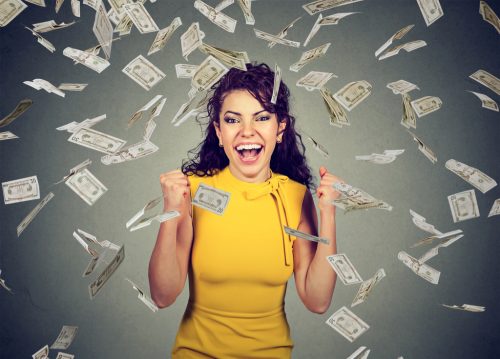 If you've ever been involved with a Pisces, you know they're always trying to match other people's energy. Evans describes Pisces as "introverts who eschew crowds and prefer to socialize in their own privileged pool." Because of their need for exclusivity, they search for a "wealthy spouse to shield them from the masses." This can mean that when they meet someone wealthy, they present themselves as equally illustrious.

Pisces dream big because they're the most imaginative of the zodiac, but that means they also envision things that are hard to achieve without financial help from others. According to Evans, while this might not be the first sign you think of when you think of someone marrying for money, "Jupiter-ruled Pisces are easily lured by a spouse who can provide the biggest sparkler." Dreaming big means dreaming of a glamorous wedding day and an equally enviable engagement ring. This VIP approach can also translate to friendships. Many times Pisces only want to keep company with people they deem very important.

Libras only truly thrive when they make their lives aesthetically pleasing, and they need money to make that happen. Evans tells us, "Libras, the symbol of beauty, elegance, and luxury, marry mates who will happily join them in their extravagance."

It doesn't matter if Libras are born with money or not, because they think they deserve the most luxurious items. "They are innately comfortable with extreme wealth and think nothing of socializing with (or marrying) oligarchs or wealthy industrialists," says Evans. Essentially, they're looking for their own version of Elon Musk.

Sagittarians can be quite gluttonous, which means they love opulence. This opportunistic sign wants the best of everything, whether that means flying to Cannes on a private plane or sitting in the front row of Fashion Week. Evans describes Sagittarius as "the consummate jetsetter" who prioritizes international travel and vacationing on yachts. If you're involved with a Sagittarius, expect them to always want meals at fine dining establishments and luxurious island vacations. This sign won't settle for anything less than the best, which means they're looking for a partner who can give it to them easily.