The 11 Things Men Should Never (Ever) Do After Sex

All of the post-coital no-no's you should know by now.

There's oodles of information about what we can do to increase the chances of sex happening, and countless more advice columns and help articles about how best to comport ourselves during the act itself. Interestingly, though, there's not much serviceable information about what guys ought to do after sex. That's why we did some digging, spoke to a number of sex educators and therapists, and got a handle on exactly what we should be doing in sex's sticky aftermath—and what we shouldn't.

What you'll find below is a cheat sheet on what not to do after sex. Being familiar with these post-coital no-nos can often be a deciding factor on whether you rise or fall in your partner's esteem, and maybe your own as well. And while you're in the self-improvement mindset, make sure you know the 5 Things Smart Men Never Say to a Naked Woman. 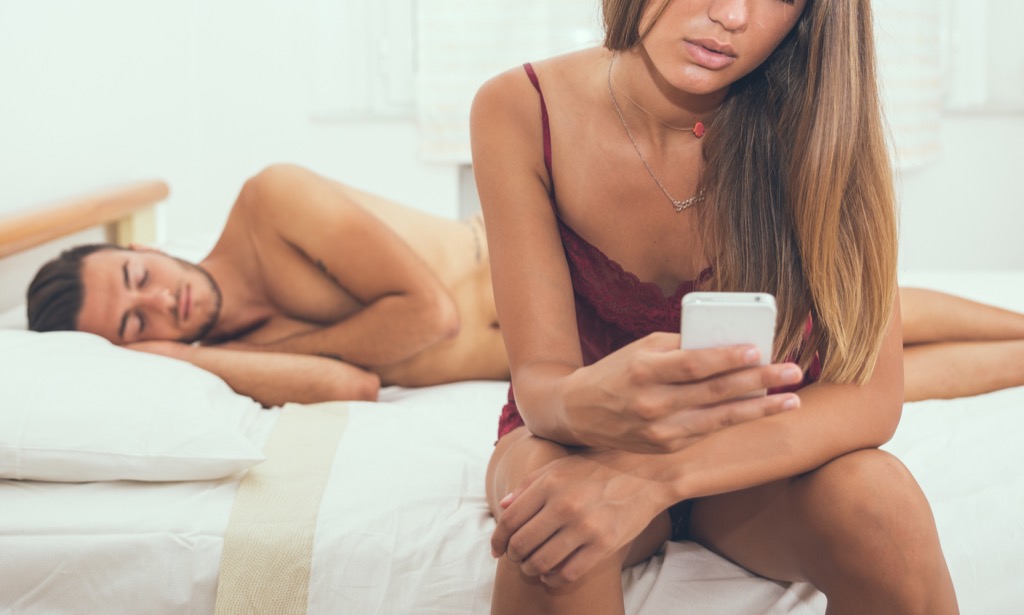 A lot of men are familiar with the urge to zonk out after their orgasm. Speaking to Huffington Post co-founder Arianna Huffington, Best Life's own Dave Zinczenko—author of Men, Love and Sex: The Complete User Guide For Women—quipped: "Men go to sleep because women don't turn into a pizza."

In all seriousness, though, there are a few reasons dudes want to hit the hay immediately after sex: It often takes place around bedtime, we're already in bed, it's likely that we've exerted ourselves physically, and so on. Orgasm also releases a cocktail of chemicals that often work like a mega dose of Nyquil. Your best move, though, is to resist the urge to drop off until you've considered all the other items on this list. But if you're looking for the exact chemical explanation, check out Why Men Fall Asleep After Sex (and Women Don't).

In our recent article, we talk about being present during the act of sex. Unsurprisingly, it turns out that being present in the afterglow is just as important. "Turning on the TV or picking up your phone will leave her feeling abandoned and make her feel unimportant to you," says Certified Sex Therapist and Advanced Imago Relationship Therapist Deborah Fox. "By having sex with you, a woman has made herself vulnerable. If you disconnect, you'll leave her feeling unsafe and insecure." Checking Facebook one last time before you fall asleep really isn't worth that, so don't it. (But if you have a spare moment right now, you might be interested to know the 11 signs Mark Zuckerberg is definitely running for president.)ae0fcc31ae342fd3a1346ebb1f342fcb

3
Put sex toys away without cleaning them.

Several studies have looked at the ability of bacteria and viruses like Human Papilloma Virus (HPV) to hang out on sex toys if they're not cleaned properly. Falling asleep before you clean any sex toys you've used increases the likelihood of one or both of you getting an infection that requires a trip to your doctor's office, taking sex off the table for a while. Quality sex toys come with detailed, item-specific care instructions; make sure you know what they are so you can play safe to play more.

4
Give her the wet spot.

Sex can—and some say should—be a wet and wild experience. But a common consequence of no-holds-barred sex is often a puddle of juices that can be rather uncomfortable to lie in—and not taking your partner's comfort into consideration after sex is a definite no-no. "This is just gross, uncomfortable, and rude," says Certified Sex Therapist and Certified Sexuality Educator Kristen Lilla LCSW. "If you don't want the wet spot either, offer to change the sheets or lay a blanket down." If you and your partner tend to have juicy sex, consider investing in an absorbent sex blanket like the Fascinator Throw by Liberator and put it down before you get down. And if you're in that category, you should definitely know The 6 Best Foods for Smelling (and Tasting) Like a Million Bucks.

As previously mentioned, sex can be a sweaty, gooey, and sometimes fragrant activity. (Indeed, that's what a lot of people like about it!) Some folks don't enjoy that aspect of sex, however, and scurry off to the bathroom to wash up immediately after they're done. There are actually some very good reasons to wash up after sex, but you shouldn't be in too much of a hurry to do it. "You don't want to give her the message that you're washing her off," says Florida-based sex therapist Constance DelGiudice Ed.D, LMHC. "Linger for awhile. Give her a clear message that you love all of her and you're not in a rush to wash it all away." (Unless she prefers the quick clean-off, that is.)

Sex usually means being naked. Literally naked, meaning without clothing, and figuratively naked, meaning without pretense or artifice. That means that being critical during this time is probably not a great idea. "After an endorphin rush and a release of oxytocin, people typically feel vulnerable," says Lilla. "Being critical while someone is naked in bed is going to not only be hurtful, but may make them less open to new sexual experiences with you. If you really need to offer feedback, wait until the next day when the chemicals are back to baseline and you are both fully clothed."

7
Divulge information she should have known before.

If you have a suspected STI, have had sex with another partner, bet your joint savings on a Conor McGregor win, or any similarly significant piece of information, withholding it until after you've had sex is a serious no-no. "Nothing says awkward by dropping a bomb after the fact," says Lilla. "Depending on the information you're divulging, your partner may also feel betrayed and angry. Be respectful and open up [beforehand] so your partner can make an informed decision about whether or not they want to have sex with you, just like you got to make the same informed decision."

And while we're on the subject of transparency…

Maybe you have a perfectly good reason why you can't host a sleepover. Perhaps you have an early start the next morning, or maybe sharing your bed is not conducive to a good night's sleep for you right now. That's totally legit. What's not cool, however, is informing your partner that a sleepover is not the cards only after you've had sex. One woman we spoke with told us that she would have been fine with her partner telling her that she wouldn't be able to stay the night ahead of the drunken sex session they had—but he didn't.

"He woke me up after I'd been asleep for 90 minutes and told me I had to go before his roommates woke up," she said. "Both drunk and hungover, I had to take a rush hour subway ride in smudged makeup and evening-wear. It's not what I had expected and that sucked." If you aren't up for spending the entire night together, manage expectations and tell her what's going on with you.

After sex, our bodies and brains are flooded with feel-good hormones that promote bonding between people. If you keep a physical distance from your partner after sex, it likely won't go unnoticed. "Staying connected is very important to a woman," says Deborah Fox. "If you don't touch, cuddle, say complimentary things to her, she's likely to withdraw. Sex isn't an event for her that ends in orgasm." So it shouldn't be for you either.

Smoking is demonstrably a bad idea at any time, but after sex is perhaps the worst occasion to spark up. I mean, ending an intimate sex session by giving yourself dog breath, and then having to use a used condom as a makeshift ashtray? Not nearly as sexy as decades of cinematic depictions would have us believe. What's more, habitual smoking is strongly linked to erectile dysfunction, and exacerbates snoring, too.

11
Describe her facial expressions during orgasm. 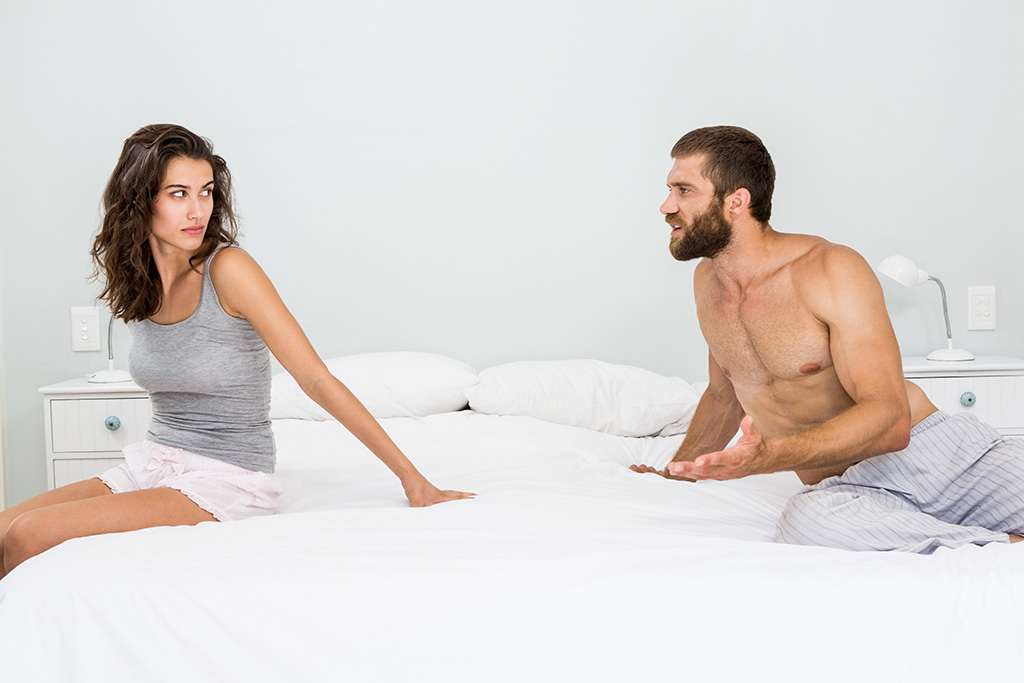 In all honestly, we hadn't considered this one, but according to DelGiudice, many men take it upon themselves to relay what, exactly, they witnessed during one of the most raw and vulnerable moments in the human experience. Which is not a good idea, because, well, "Women want to lose themselves during sex," says DelGiudice. "The last thing they want is someone giving them a blow-by-blow description of their most intimate moments. I've heard women say, 'I feel like a science project, and I hate it' or 'It makes me self-conscious'."

There's no reason at all why you should want to make the person you just had sex with feel bad about themselves—don't be that jerk. Instead, be her hero by knowing the 5 Easy Ways to Make Sex Last (Much) Longer.