20 Things You Should Never Do at Weddings

Generally, people behave pretty well at weddings: they keep the attention on the bride, they make sure any inappropriate moves stay off the dance floor, and they don't drink the open bar dry. But there's always that one person who manages to do something that has everyone shaking their heads in disbelief. To make sure that's never you, pay close attention to these 20 things you should avoid at all costs at a wedding. And if you're the one getting married—and you'd like to avoid some wedding planning faux pas—don't miss the 10 Wedding Trends to Avoid in 2018.

Stealing the show and putting on your own proposal during someone else's big day seems like a major no-no, but you'd be surprised how often it actually happens.

Even if being surrounded by so much love and a magical atmosphere puts you in the mood to take things to the next level with your partner, save popping the question for another time. If you're looking to get engaged (and hopefully miles from the nearest wedding ceremony), check out The 20 Best Ways to Absolutely Nail Your Marriage Proposal.

2
Give a Drunk Speech

Giving a best man or maid of honor speech is a pretty big honor, and the bride and groom — as well as the entire wedding! — are going to be on the edge of their seats waiting to see what you're going to say.

When your heartfelt words are sloppy and you're clearly hammered while standing up in front of the crowd, it's not only disrespectful to your friends — it makes you look pretty awful, too. And if you're looking for some great speech #inspo, don't miss these 30 Funniest Jokes from Celebrity Roasts. 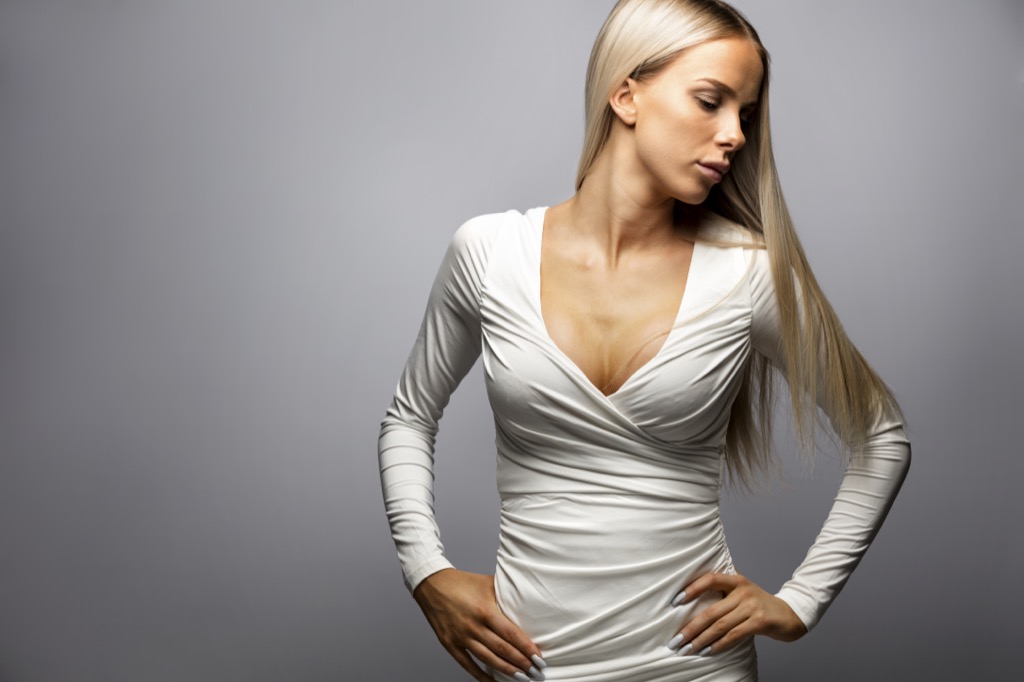 Every wedding, there always seems to be at least one person who shows up wearing some sort of white dress thinking the old rule is no longer worth following.

Even if it's off-white, save the outfit for another day. It might look great on you, but the bride isn't going to be pleased when she sees another white hue in the audience on her special day. And for more great style advice, check out these 30 Best Tips for Dressing Well in Your 30s. 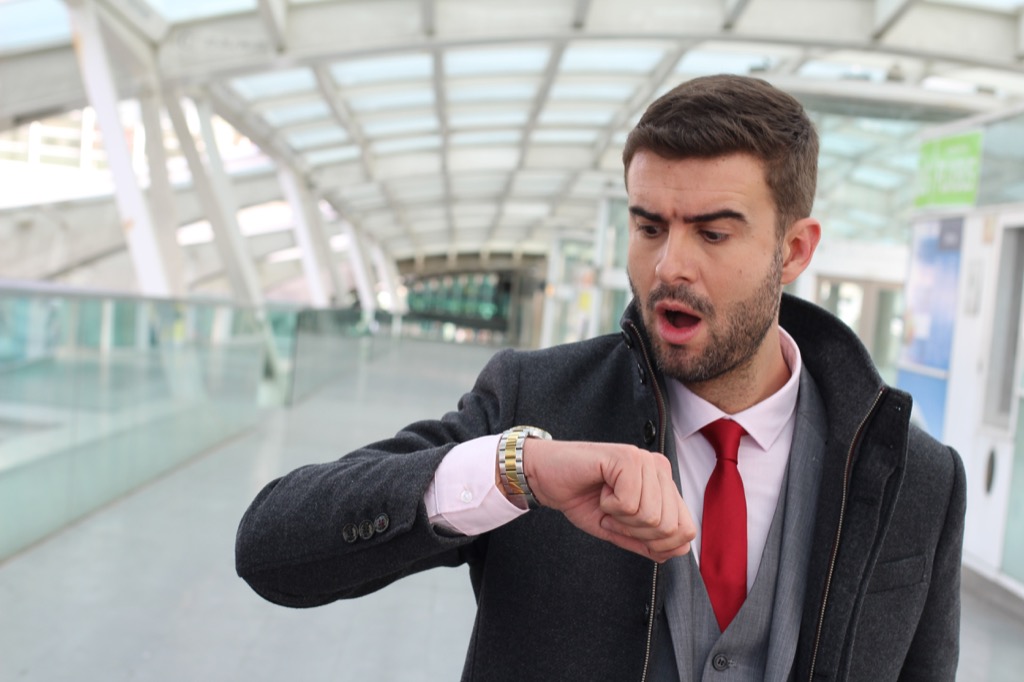 You can be late to lunch all you want, but when it comes to weddings, even a few minutes past the time on your invite could result in you stealing attention away from the bride and groom. Instead of strolling in five minutes late as the flower girl is walking down the aisle, make sure you're at the venue early so you won't cause a scene. And if you need an extra hand with punctuality, read these 15 Easy Hacks That Will Make You On Time—All the Time.

5
Strip Tease on the Dance Floor 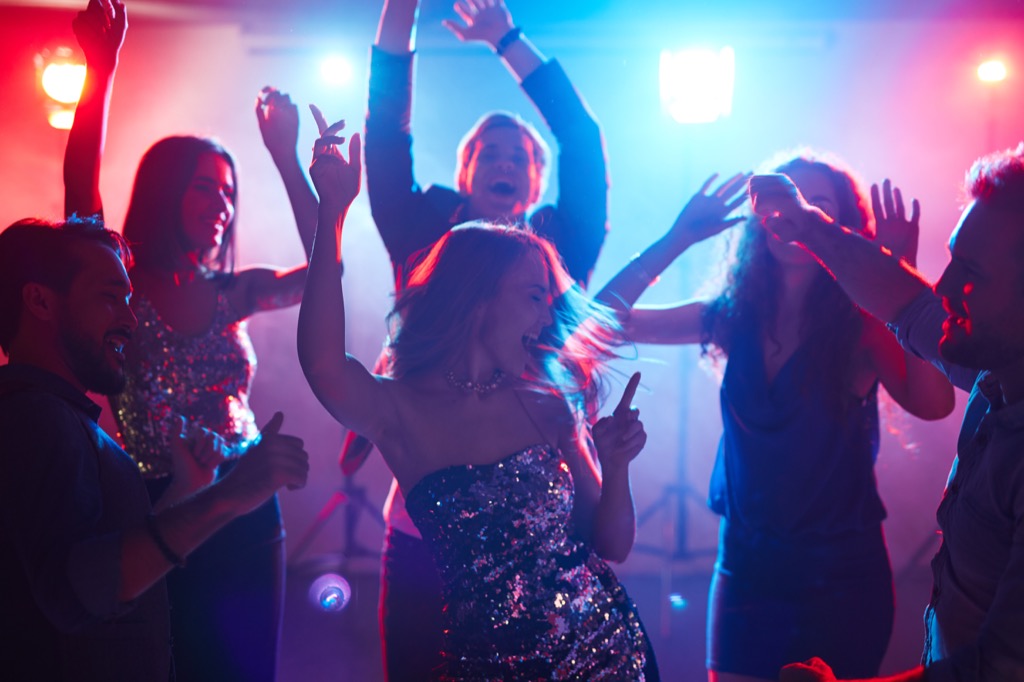 As tempting as it is to steal the show on the dance floor by swinging your tie around in the air and taking off your shirt, please — for the sake of everyone — leave your clothes on. The effects of the alcohol might be kicking in at full-force, but no one wants to see you pull a Magic Mike during someone's special day. 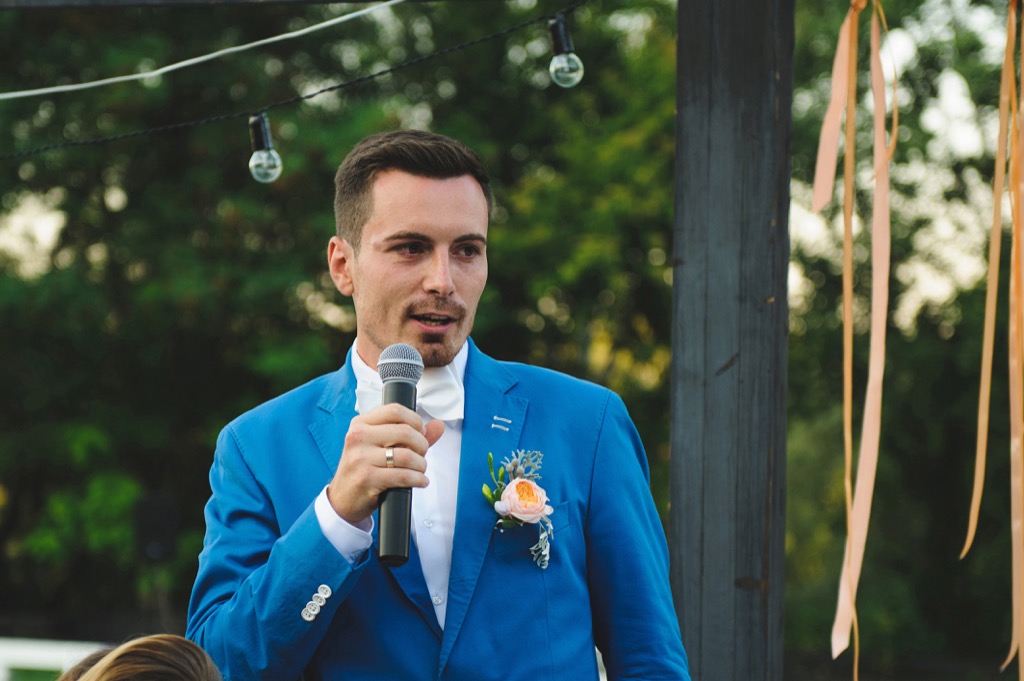 If you know you're going to be giving a speech at the wedding, have an idea of what you're going to say ahead of time so you're not totally unprepared and stumbling all over your words. People will notice — promise. And if you're not going to give a speech, don't pull a Michael Scott and whip one out at the last second, causing major embarrassment to the bride and groom. If you're in the market for some great lighthearted jokes, peruse this list of 50 Amazing Jokes from Comedy Legends.

7
Show Up the Bride

Even if you love being the center of attention, this isn't your time to do it. Try your hardest to make sure you're not outshining the bride during her big day, whether that's with that you're wearing or on the dance floor. This day isn't about you — and if you think it is, you probably shouldn't be there in the first place. 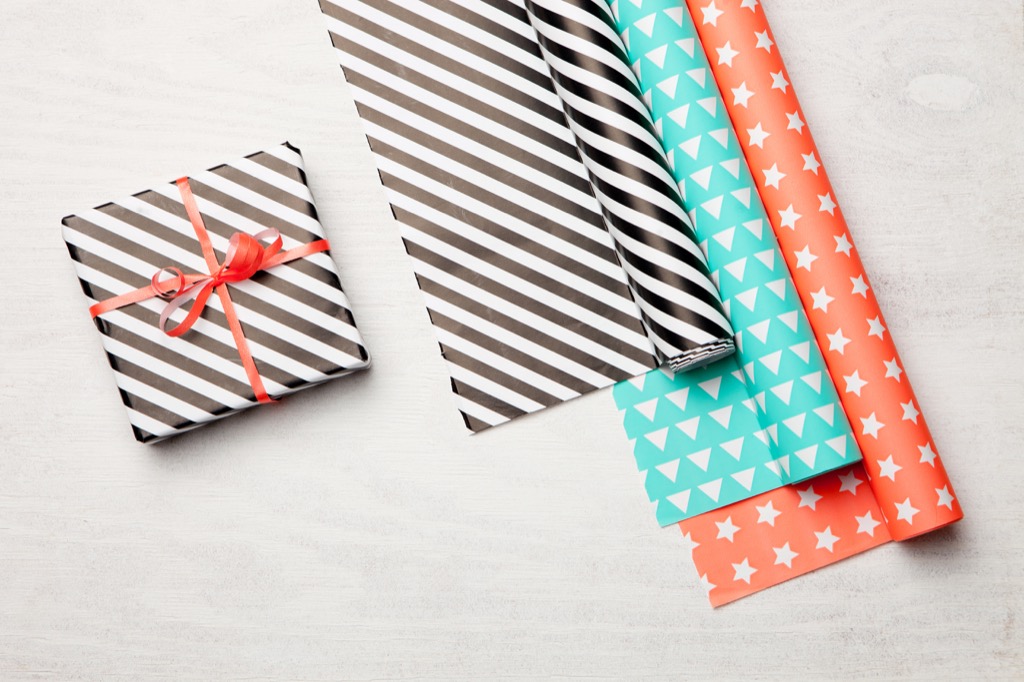 You might think your knitted mittens are the most special, heart-warming gift around, but unless you're the bride and groom's sweet little 80-year-old grandma, make sure you stick to the wedding registry. They don't want random toasters and dish sets — they want exactly what they put on their Bed Bath & Beyond list.ae0fcc31ae342fd3a1346ebb1f342fcb

Months — and sometimes years! — of preparation go into a wedding. Everything from the venue to the menu has to be perfect, and by the time the big day rolls around, the bride and groom are probably pretty proud of everything they planned. So it should go without saying that do not — under any circumstances — complain about anything to do with the wedding. Whether it's too hot or your dinner isn't up to par, keep your opinions to yourself — and especially don't open your mouth to the bride and groom. 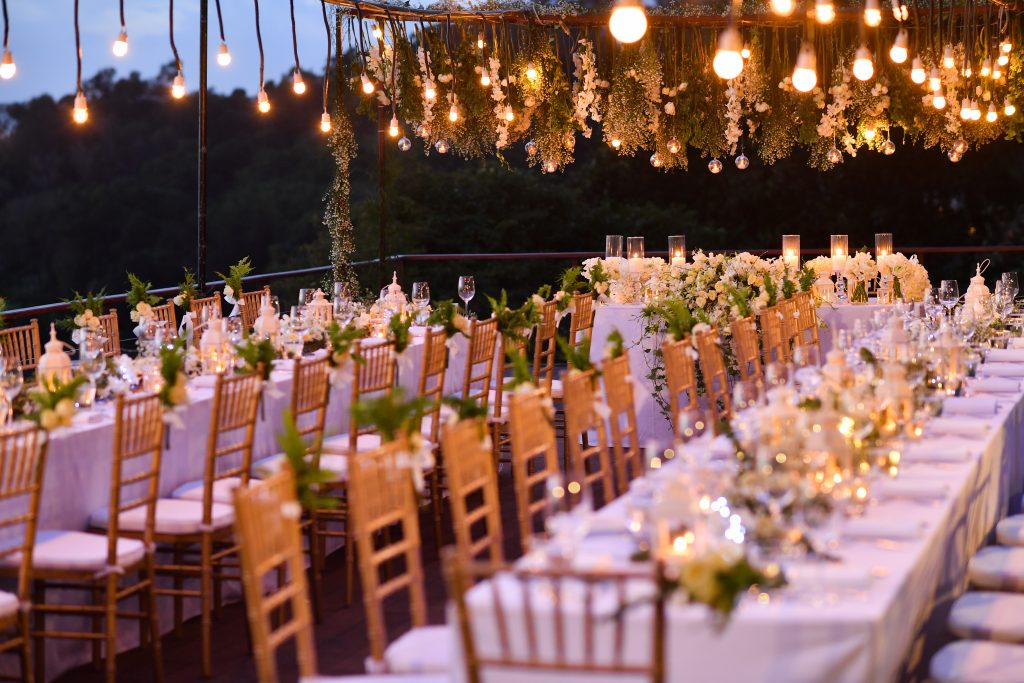 Oh, the seating chart. Sometimes you're really happy with where you're put during the ceremony, and sometimes you're left with a bunch of people you're meeting for the first time. No matter what the case is, don't change your seat. The bride and groom put you there for a reason and sitting somewhere else is only going to cause problems. Eat your meal, make some new friends, and then ditch 'em for the dance floor if you're not having a good time.

11
Be On Your Phone During the Ceremony 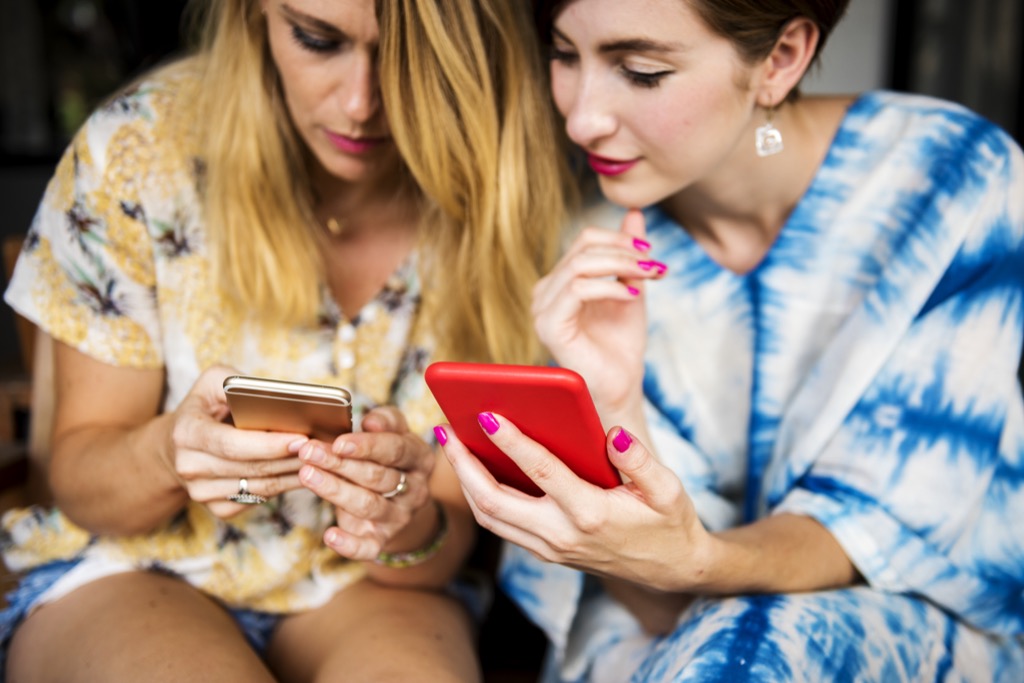 How many pictures do you have on your phone that you'll never look at again? If you're planning on snapping pictures or videos during the ceremony, just don't. Having a bunch of phones out takes away from the magic of the moment. The bride and groom hired a professional photographer for a reason. In fact, just keep your phone away — and on silent! — in general. There's no reason to have it out while they're saying "I do."

12
Wear Something Too Tight and Short

Everyone knows you have a killer body, but the one thing that's almost as bad as wearing white is wearing something that's so tight, short, and revealing that it looks like it belongs at the club — not a wedding. Save those outfits for nights out with your girls, not someone's ceremony. And if you're a man, you should definitely leave these 40 things in the closet.

13
Ask for Seconds at Dinner 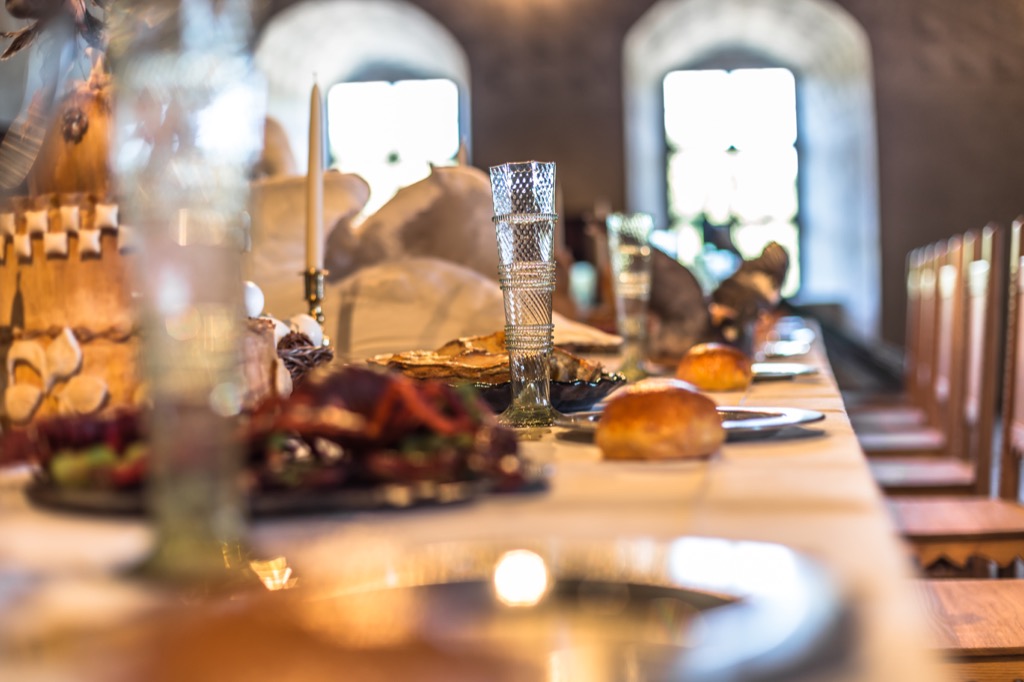 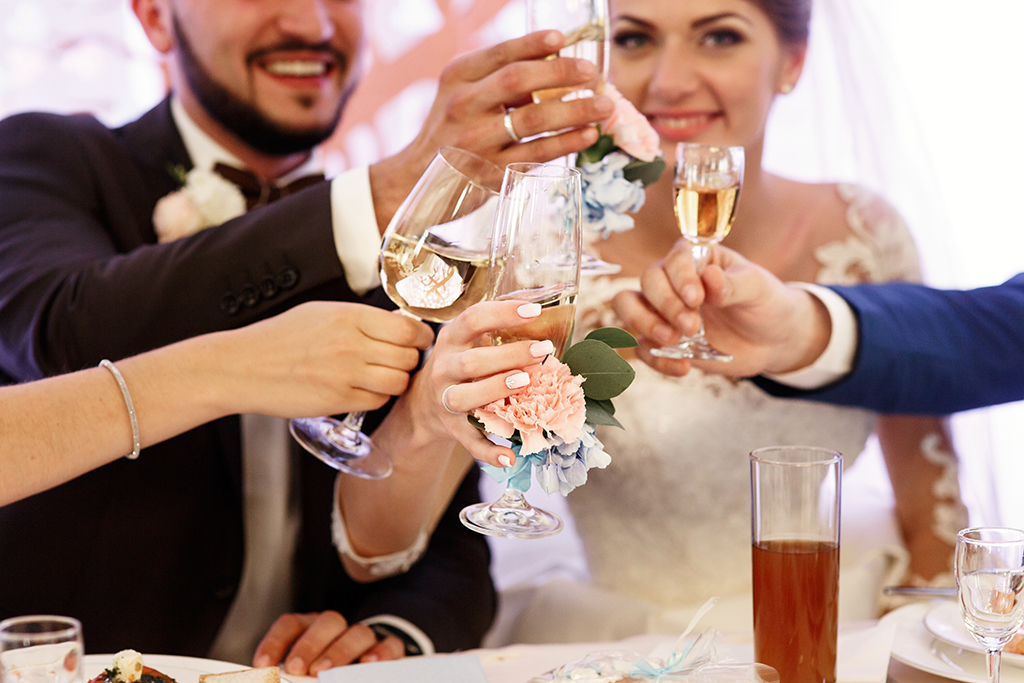 Weddings are a celebration: You're supposed to have fun. Unfortunately, as great as open bars are, just make sure you don't spend all your time sipping the free wine and beer. Too much alcohol could lead to doing plenty of things that will be captured in the photographer's photos for life — and probably things you're not necessarily proud of.

If you have a question come wedding day — whether it's about the location or the food — don't ever ask the bride. (Or the groom, for that matter.) She has a lot on her mind and is probably already stressed out enough, so the last thing she wants to do is ask the chefs if there's dairy in the creamed corn for you.

16
Let Your Child Scream and Cry

Your child might be a complete angel all day long, but if they start screaming and crying during the ceremony, don't be the person who just sits there and lets it happen, taking attention away from the bride and groom's "I dos." It's less distracting to calmly walk out and make sure your kiddo doesn't do any more interrupting than it is sitting there hoping they calm down.

17
Bring a Plus One When You Don't Have One 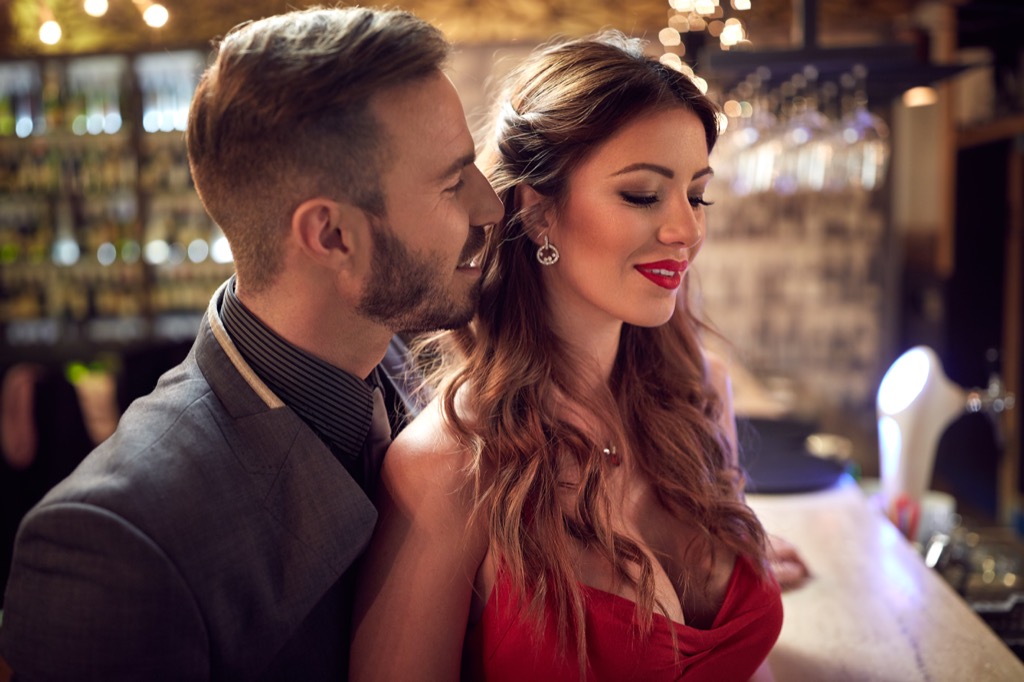 If you didn't get a plus one on your wedding invite, don't randomly bring on anyway on the day of the wedding. The bride and groom carefully planned to make sure there are enough seats and meals for everyone, so deciding last-second that you don't want to go alone is going to throw off everything and cause problems.

18
Post Any Pictures of the Bride on Social Media

…before she walks down the aisle, that is. It might be tempting to post some snaps of your bestie getting ready for her big day, but the nervous groom could easily be destressing on his phone and accidentally get his first look of his future wife on social media instead of in-person. Don't ruin that magical moment for them: Wait to post your pictures after the ceremony.

19
Don't Steal All the Bride and Groom's Time 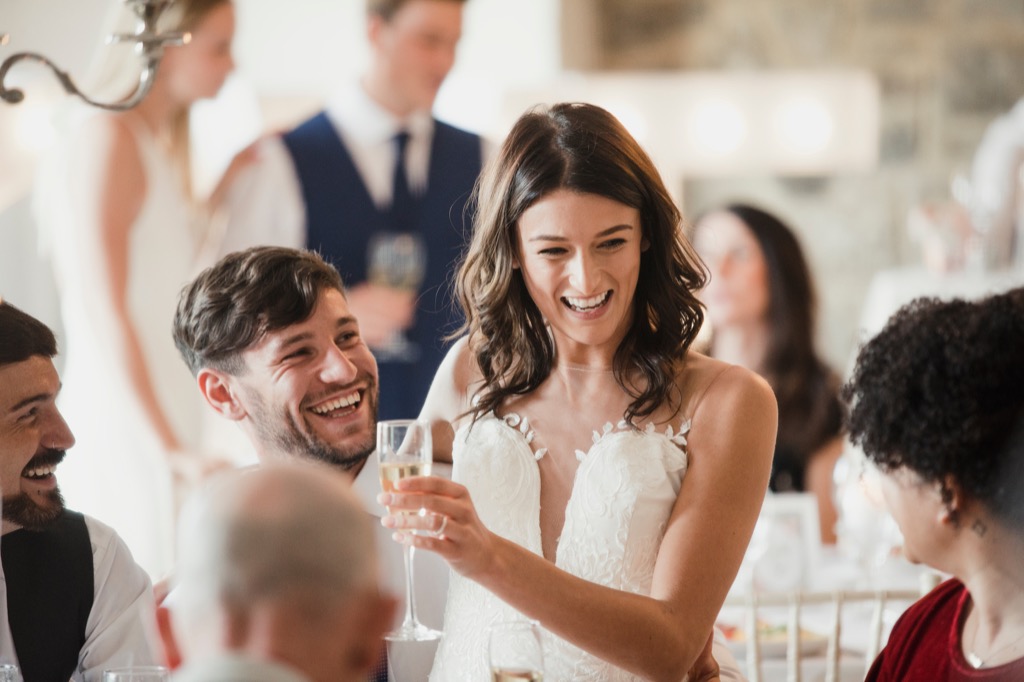 You came to the wedding to see your beloved bride and groom, but so did 100 other people. As tempting as it is to steal all their time chatting during cocktail hour, say your hellos and congrats and let them mingle with all their other guests, too. You can always hang out with them after their big day.

20
Don't Get Aggressive During the Bouquet and Garter Toss

You might really, really, really want to be the next bride or groom — but please don't be so aggressive during the bouquet or garter toss that you injure someone diving for the grand prize. That means no tackling or pushing, no matter how bad you want it. For more wedding advice, check out these 10 Wedding Trends to Avoid in 2018.