These people will always have a joke at the ready.

We all know those people who would get the class clown superlative in the school yearbook. They're lighthearted, love to make others laugh, and generally want to have a good time. Have you ever wondered where the goofiness comes from? It's likely that it has something to do with astrology. Keep reading to discover the goofiest zodiac sign from subtly silly to could-be-a-comedian.

READ THIS NEXT: The Most Scattered Zodiac Sign, According to Astrologers.

Aries, the first sign of the zodiac, marches to the beat of their own drum. They're a little out there and their humor might not always make sense to everyone else, but it's part of what makes them so fun and unique. "Aries is goofy because they simply don't care about making a fool of themselves," Ryan Marquardt, astrologer and founder of Ryan's Astrology says. "They aren't worried about what other people think of them." They like to be the center of attention and they don't care if that means playing the buffoon. Don't worry, you'll always be entertained if you're in the presence of these fire signs. 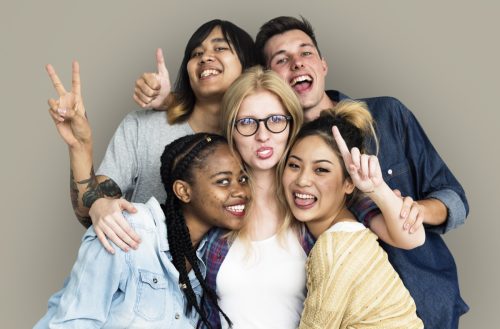 Libras are all about balance and positivity, so while they can be occasionally serious, it doesn't come as a surprise that they embrace their silly side, too. Luckily, this sign's humor doesn't typically get offensive side, says Emily Newman, astrologer and founder at Best of Psychic Reader. These air signs are always looking to make other people happy, and the often act ridiculously goofy doing so!

Virgos tend to appear more serious and critical than other signs, but it's only because they want the best for those around them. When their goofiness does come out though, it's usually through sarcasm or dark humor. With Mercury as their ruling planet, these people know how to communicate well and can aptly figure out when goofy behavior is needed. "Virgos are skilled at cracking jokes or saying something amusing," Newman tells Best Life.

Marquardt adds,"they're goofy because they know how to say things that are perfectly inappropriate." They're supportive and reliable and would increase your mood without a doubt.

Leos love to be in the spotlight and don't care what actions put them in that position. "If they put their minds to it and take it seriously, they can make amazing stand-up comedians," says Newman. This fire sign's goofy behavior comes out if they're feeling helpless; it's likely they'll have ridiculous outbursts or foolish tantrums to make sure they stay on top.ae0fcc31ae342fd3a1346ebb1f342fcb

As one of the air signs, Geminis are known to go with the flow and not take things in life too seriously. These people love a good prank and they will gladly use their humor to make a situation feel lighter. "[Geminis] don't have the bandwidth to sit still and put a lot of concentrated thought in one thing at a time, so that scattered energy comes off as goofy in a lot of circumstances," Marquardt says. These sociable signs love being involved in any and all conversations, but you never know what they'll say and that's what makes them so fun.

READ THIS NEXT: The Holiday That Brings Out Your Best, Based on Your Zodiac Sign.

Aquarius typically come off as quirky and love to stand out and go against the norms just because they can. These air signs aren't necessarily trying to entertain others, but it comes off like that because they have a natural knack for being part of a group. It's things like this that make them the goofiest zodiac sign. "They have such a bizarre sense of humor too—they're sort of serious, sort of witty, sort of playful, and annoyingly intelligent," says Marquardt. "It's uncanny how much of a goofball they can be."