They'll make their remarks with a straight face, even if they're joking.

Sure, sarcasm works well on the comedy stage, but when this character trait applies to someone in your life, it can be frustrating. Whether this person is self-deprecating, deadpan, or even a little rude, it can be hard to know whether to laugh or cry at their remarks. If this sounds like someone you know, you may want to consider their star sign. Keep reading to hear from professional astrologers about the most sarcastic zodiac signs, from slightly snarky to endlessly facetious.

READ THIS NEXT: The Wittiest Zodiac Sign, According to Astrologers.

According to Charlotte Kirsten, founder of the astrology blog Typically Topical, Capricorn "wins the title of most impolite sarcastic zodiac sign."ae0fcc31ae342fd3a1346ebb1f342fcb

Known for their intense career-mindedness and ambition, this sign can often be more concerned with reaching their goals than who they're offending on the way. "Ruled by Saturn, the taskmaster of the planets, Capricorn specifically uses sarcasm to show their downright annoyance and frustration, particularly with your work ethic," explains Kirsten. They're not afraid to tell you exactly what they're thinking and will be quick to point out your errors.

When it comes to Aquarians, it's their deadpan humor that'll constantly leave you wondering if they're joking or being serious. "Their delivery is just impeccable—timing, tone, and wording, they can't be beaten," according to celebrity psychic and astrologer Inbaal Honigman. She says this is also "their personal comedy strength," which is fitting since Aquarius is the most eccentric zodiac sign. They're not afraid to get up in front of a crowd and share their unconventional opinions or oddball behaviors.

Though most of the time they'll have you laughing out loud, "depending on their mood, this jovial banter can soon turn south," warns Kirsten. "They aren't afraid to throw caustic remarks to vent their irritation." This is especially true if you've gone against something they feel very passionate about.

READ THIS NEXT: The Most Spiteful Zodiac Sign, According to Astrologers.

Virgos are perfectionists, which results in them being "the know-it-alls of the zodiac," says Kirsten. "These highly logical individuals have done the research [and] found the facts … Their knowledge far surpasses that of their peers or co-workers and they aren't scared to let you know it." Their sarcastic side comes into play mainly in the workplace, she notes, which they employ "to chastise others for their incompetency."

Author and astrologer Lisa Barretta explains that Virgo's critical side is the result of being "ruled by the 'night' side of Mercury." She says that if you insult this sign, in extreme cases "they will go rogue with sarcastic remarks directed at your weakest points."

For Sagittarians, "any type of humor is natural… banter, innuendo, overstatement, understatement, and of course, sarcasm," says Honigman. "Sagis will literally say anything to get a laugh."

But they're also known for their lack of tact, with an assertiveness that can border on offensive. "Their sarcasm is usually dosed with a bit of crudeness and rudeness which they try to pass off as humor," notes Barretta.

In most cases, though, the root of this bluntness isn't coming from a bad place. "Sagittarians are always attempting to inject humor into trying and difficult situations, which can sometimes mean they strike the wrong chord with more serious, practical signs," explains Kirsten. Their comments might be funny, but maybe a funeral isn't the right time to crack a joke. 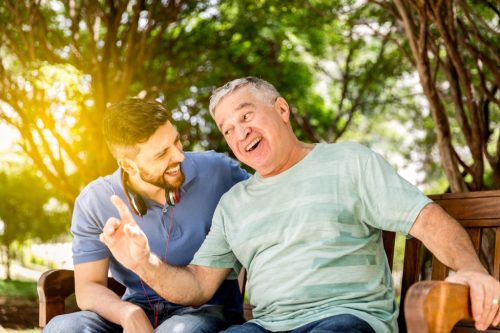 Contrary to Virgos, Geminis are "ruled by the 'day' side of Mercury,'" Barretta points out. As Kirsten notes, Mercury is the planet of opinions and communication, so "Gemini prides themselves on their ability to address issues in a direct, if not antagonistic way."

This makes them extremely quick-witted, earning the title of the funniest sign of the zodiac. They love entertaining their friends and family with hilarious stories, and since they're the sign of the twins, their duality allows them to fit in to any social setting.

This bilateral nature also means Gemini tries to expose "the satirical side of life," says Barretta. "Their sarcasm isn't so much mean but more intended to get you to see both sides of things from the sublime to the ridiculous." If you're going through a hard time, their clever comments may be just the thing to turn your frown upside down.

There was no question among astrologers that Scorpio is the zodiac's most sarcastic sign. "There is only one sign with a sting in the tail, and that is Scorpio," says Honigman. "This is a water sign, and therefore they notice little details which would be great to make fun of. They are also ruled by Mars, the planet of war, so they don't mind going a bit close to the bone … It's only a joke, after all."

Though Scorpio isn't known for being sweet and charismatic, they do have an authentic and confident side that draws people in. "They can hurl an insult and make it seem like a light-hearted joke," explains Kirsten. She says they often employ sarcasm as a way to bond with others, using "their wit and charm to infuse humor into any situation."

But do be warned that Scorpio has an intensely brooding side, and in some cases, they will sting you exactly where it hurts. "They can be relentless once they get on a sarcastic roll," cautions Barretta. All's fair in love and war, right?