This Beloved Chain Is Closing All of Its Stores

The "last man standing in [the] industry" is closing its remaining 250 locations.

It's a sad day for America's film lovers as Family Video, one of the last relics of the movie rental scene, has announced that its remaining stores will be closing. The chain's parent company, Highland Ventures LTD, announced on Jan. 5 that the 250 Family Video stores still standing around the country are set to close. "While we have faced digital competition from Netflix and others for years, nothing has been as devastating to our business as COVID-19," Keith Hoogland, CEO of Highland Ventures, said in a statement. "We are very thankful to have been able to provide entertainment for many family movie nights." Read on for more on Family Video closing up shop, and for another company in trouble, check out These 2 Beloved Department Stores Are "Slowly, Quietly Dying."

The news comes just three months after nearly half of the 510 Family Video locations the company had at the beginning of 2020 were shut down, Highland Ventures LTD announced in October. "You may have heard that we're closing select locations…it's true. We've enjoyed serving so many communities over the years, but recent events have caused us to make some tough business decision[s]," the company said in a statement at the time.

In Hoogland's Jan. 5 statement posted on the Family Video website and Facebook page, he notes that the chain outlived the nation's "big 3" movie rental companies: Blockbuster, Movie Gallery, and Hollywood Video. But unfortunately, "the impact of COVID-19, not only in foot traffic but also in the lack of movie releases, pushed us to the end of an era," Hoogland added.

The last day to rent at Family Video is Jan. 6, and stores will close "once all items are sold," which includes everything from fixtures to movies to snacks to gumball machines. The company's website, FamilyVideo.com, will remain open where they will "continue to sell movies, CBD products, T-shirts, memorabilia and more."

"We have enjoyed being part of our employees' and customers' lives and communities for the last 42 years," Hoogland said in his statement. "I am extremely thankful to our employees and customers that were instrumental in Family Video's success. Without you, we would not have been the last man standing in our industry."

Keep reading for more news on other famous chains that are closing, and for another company that's in trouble, check out This Popular Clothing Chain Just Announced It's Closing 100 More Stores. 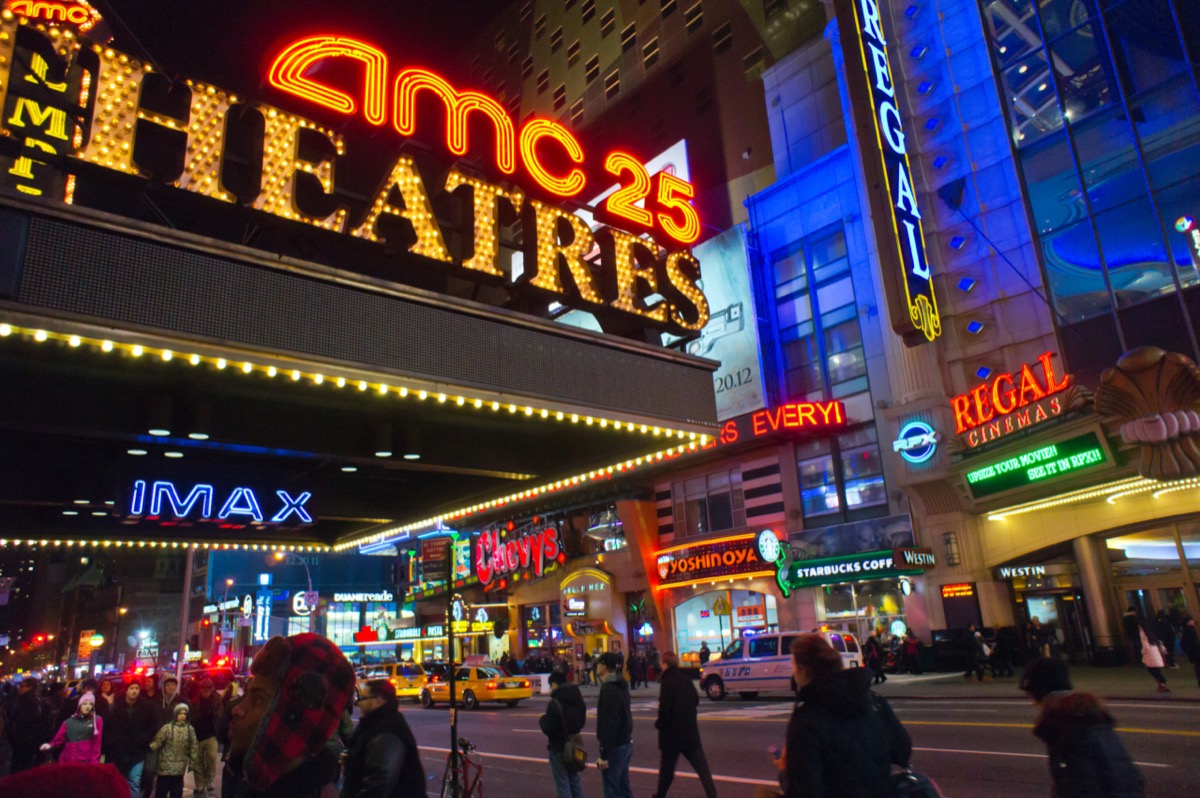 America's largest chain of movie theaters has been staving off bankruptcy throughout 2020 as a result of forced closures, a lack of new films, and limited footfall that hammered it financially. Under pressure from investors to enter bankruptcy, the latest news as of Dec. 30 is that AMC is attempting to fight off filing for Chapter 11 by offering 50 million more shares, according to Bloomberg. And for more on one of its competitors, check out This Major Movie Theater Chain Just Announced It's Closing All Locations.

The largest video game retailer in the world will be closing 1,000 stores by March 2021. While the pandemic hasn't helped matters, GameStop's problems predate COVID-19. In 2018, the chain reported an annual net loss of $485 million. The brand was hit hard by the shift away from physical games to digital offerings sparked by the launch of Xbox One and Playstation 4. And for more on the latest news in retail, sign up for our daily newsletter.

The "eatertainment" chain filed for Chapter 11 bankruptcy in late December, despite having secured a $140 million investment from Cracker Barrel. The company, which had 20 locations, has liabilities of between $10 million and $50 million. "In a now too-familiar tale, the debtors' businesses were immediately and significantly adversely affected by COVID-19," Punch Bowl said in its bankruptcy court filing, according to Restaurant Business Online. "Unfortunately, because of restrictions limiting the number of patrons at each venue, as well as the public's uneasiness of going out to eat or drink in public during a pandemic, each of those venues was losing money on a daily basis." And for another beloved restaurant in a tough spot, check out This Beloved Restaurant Chain Just Filed for Bankruptcy.

California gym group In-Shape filed for Chapter 11 bankruptcy in mid-December after more than 40 years in business, blaming statewide closures that have "dramatically impaired [In-Shape's] revenue." The good news is that the chain expects to come through restructuring "with a smaller, more focused portfolio of about 45 clubs across California." And for another gym in a worse situation, check out This Popular Gym Is Closing All of Its Locations.