The Best Computer Desktop Backgrounds for Maximizing Your Productivity

Cut stress, boost productivity, and sharpen your memory with a simple photo swap.

You stare at it all day, every day. So why aren't you using it to your advantage? We're talking about the desktop background image on your computer, which we'd bet is either an old photograph of Mount Fuji, a sandy desert, or a country road. (Or whatever those azure blobs are on Apple's standard OS.) Well, you can do better—a lot better, actually. That's why we tracked down the best desktop backgrounds, each backed by science to send your productivity levels into the stratosphere. You'll find them all right here, arranged by your specific goal—whether that's relieving your stress, tightening your focus, or honing your memory. Best of all, you can download them right now. And once you've hacked your computer for maximum efficacy, be sure to brush up on the 17 Genius Email Hacks That Will Improve Your Life.

Much ink has been spilled on the positive effects you can get from viewing natural environments. Most notably, back in the 1980s, psychologists Rachel and Stephen Kaplan found that mere glimpses of "natural settings" had subjects reporting higher levels of satisfaction with their home, their career, and their life overall. These "mere glimpses" could be as fleetingly insignificant as viewing a tree or three through a window; just knowing nature exists—and that the concrete jungle you're confined isn't all there is on this giant rock we call home—is enough to placate the human psyche.

More recently, scientists have found that the nature viewed doesn't have to be, well, natural. Writing in the Journal of Cybertherapy and Rehabilitation, authors Deltcho Valtchanov and Ellard Colin found that digitally rendered natural environments significantly reduce stress levels. The authors had subjects immerse themselves in one of three virtual reality settings: a nature setting; an urban cityscape; or a Tron-like metaphysical space, consisting of geometric shapes. Those subjected to the natural environment reported significantly lower stress—and increased cognitive ability. The other two subject groups did not. So to reduce your stress, try out one of these desktop backgrounds straight from the natural world—or learn all about the 20 Mistakes That Will Only Compound Your Stress. 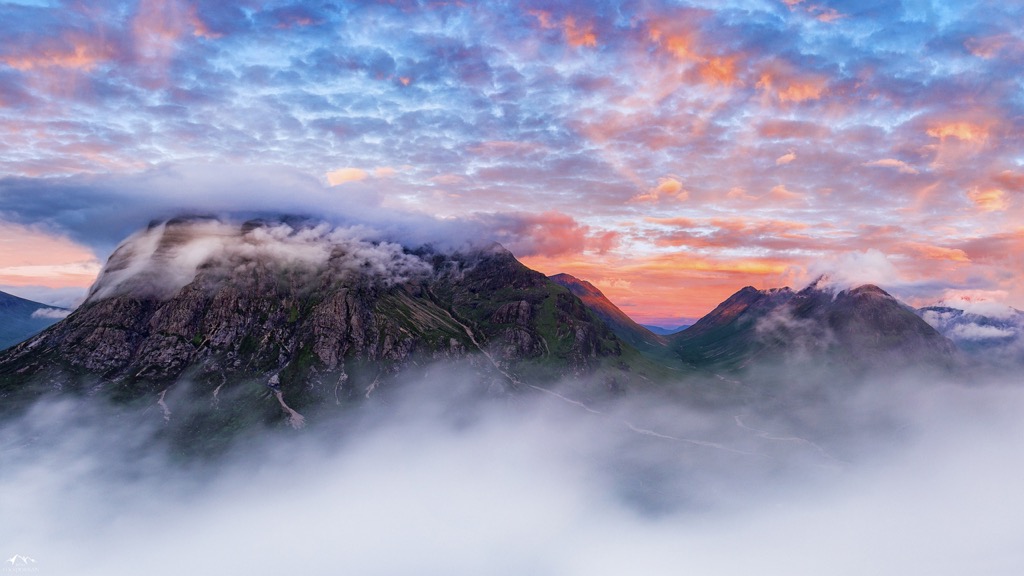 From the Rockies to the Andes to the Alps—Swiss or Japanese—few things are more awe-inspiring than a towering mountain. So if you're copping nature for your desk, you could do worse than the (literal) peak of what our planet has to offer. 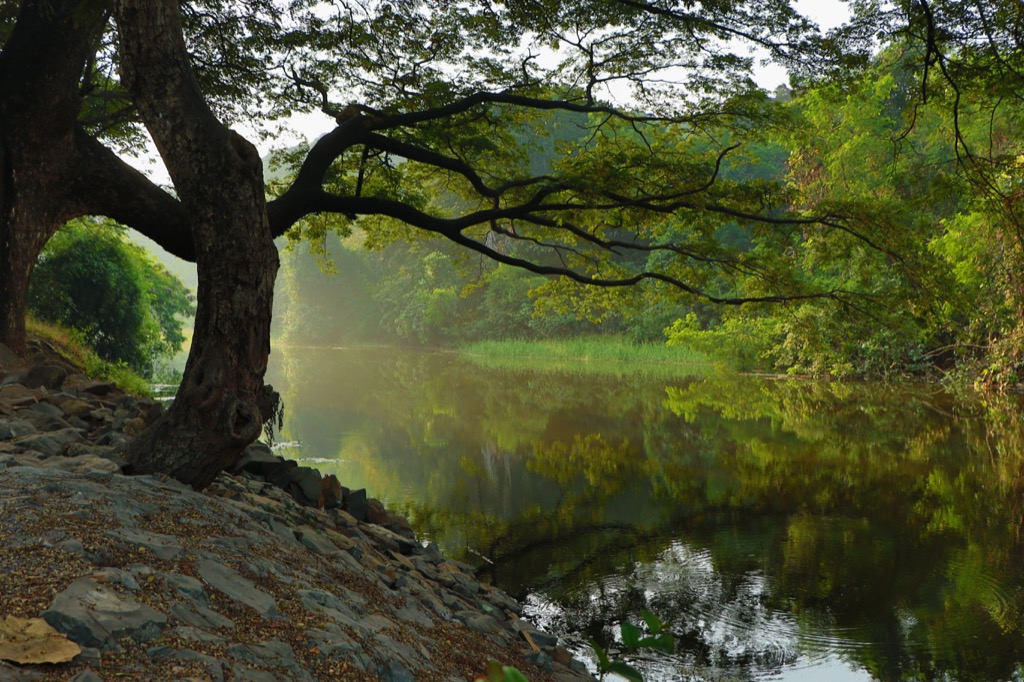 Pexels has a treasure trove of stunning, serene nature photography. Exhibit A: this misty shot of a lake enshrined by verdure. Every photo is available in ultra-high definition, perfect for desktops of any size. And best of all, they're all free. 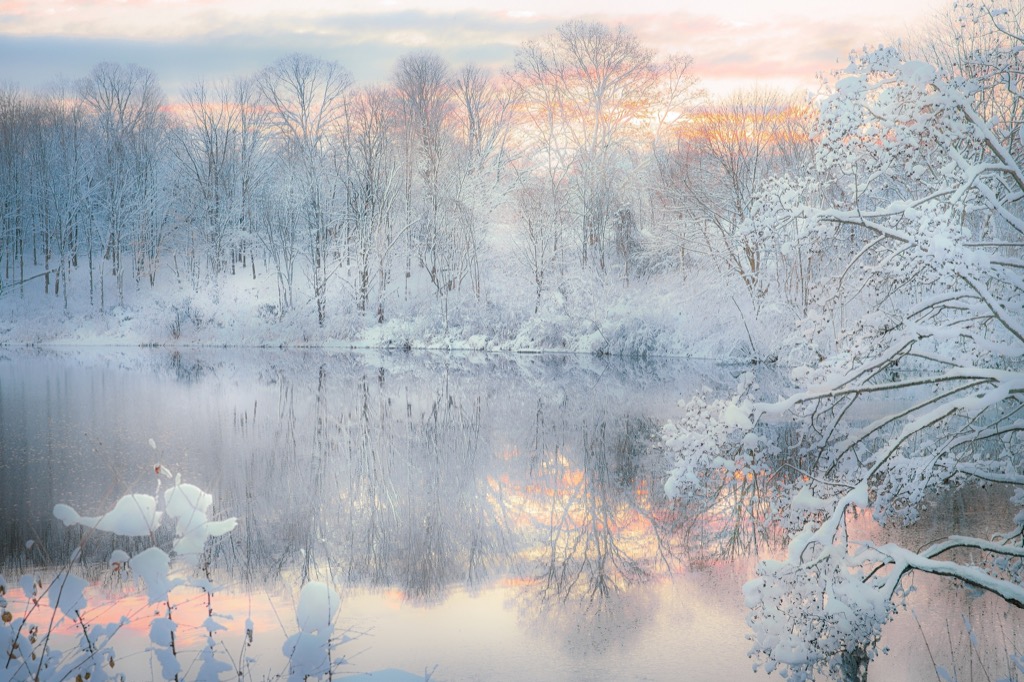 Seasonal affective order is indeed a real thing. And believe it or not, yes, it does affect people in the summertime—though with far less frequency than wintertime. For those sorry folks, we'd suggest desktop backgrounds replete with frozen lakes, bales of snow, and, of course, early, vibrant sunsets. We're all prone to daydream. (Some us even spend more than half our day doing it, according to a study in Consciousness and Cognition.) There's no science to back this up, but we'd bet good money that many of those daydreams involve tropical beaches with calm breezes and even calmer waves. So when it comes to your desktop background, take one step closer to your dream. The Grand Canyon is a triple threat: it's one of the most visually dazzling places in the world, it's one of—if not the—only physical landmarks to be a plaintiff in a lawsuit, and it's the 6th best place to go on vacation with your friends.

It's no secret that everyone loves puppies and kittens. Bring a baby animal to your office—or to anywhere—and you'll be showered in hugs and attention. But you may be surprised to learn that cute baby animals do more than just bring on the awws; these critters have an outsize effect on cognition, as well. Researcher Hiroshi Nittono, writing in PLoS ONE, discovered that viewing pictures of baby animals "improves subsequent performance in tasks that require behavioral carefulness." In other words, you'll be more precise in your work.

Nittono and his fellow researchers from the Graduate School of Integrated Arts and Sciences at Hiroshima University split their subjects into groups of two: one group viewed cute images (puppies and kittens) while another viewed images that were less cute (adult dogs and cats). In subsequent cognitive testing—including playing rounds of the childhood board game Operation—the former group tested better across the board. Those who viewed "cute images" completed Operation games quicker and with more precision than those who did not. So if you want to cut back on mistakes, try one of these adorable desktop backgrounds. According to Nittono, the larger the eyes, the better the results. 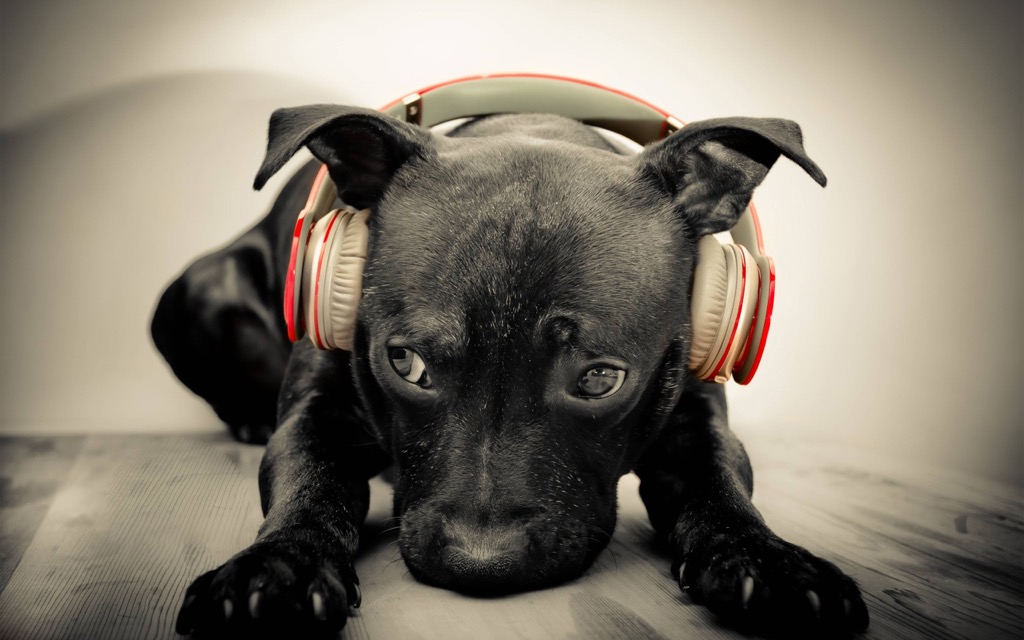 It's the first law of cuteness, as decreed by the Internet: Baby animals are automatically cuter when they pretend to be humans. True, Nitonno said that large eyes are the key to maximizing productivity. But he was clear to note that it's the level of cuteness that boosts productivity, not the eyes themselves. Larger, sadder eyes are just the easiest way to a human's heart, apparently. Still, if this sleepy little guy doesn't do it for you, then honestly, even the most doe-eyed creature wouldn't.

3
A Puppy And A Kitten 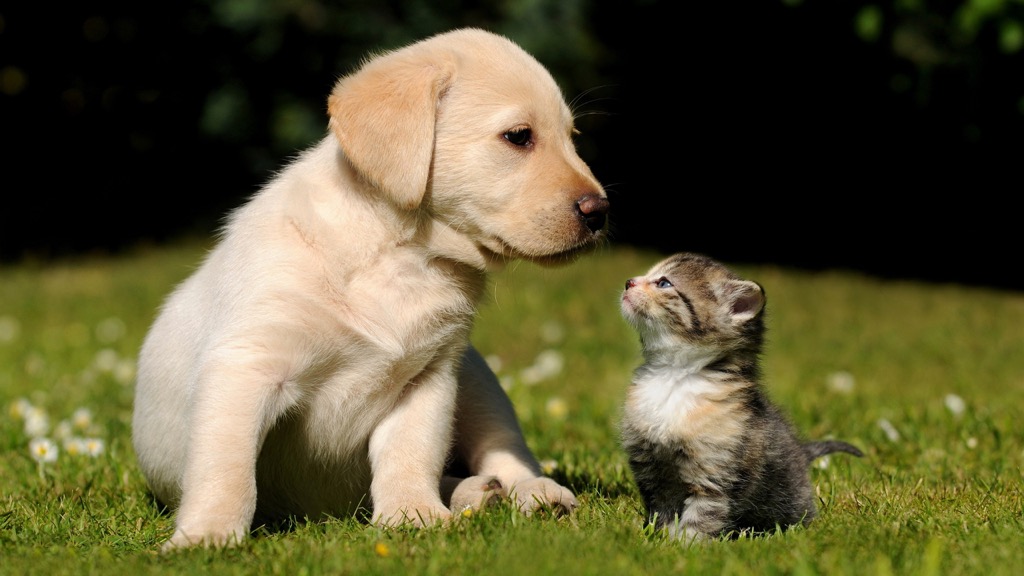 Why settle for one or the other when you can have both?

Ever wonder why, when you're trying to remember something, you close your eyes? The answer is simple: the fewer things you're looking at, the easier it is for your brain to focus and recall what it's trying to recall. Excess visual stimuli create an intellectual barrier to memory. Dr. Annelies Vredeveldt, from the Department of Criminal Law and Criminology at VU University, found, as detailed in Memory and Cognition, that viewing too many images at once—or even just a singular image that's too complex—can impede memory.

Vredeveldt and her colleagues had participants view a clip of a television show. Then, the researchers asked the subjects questions about the video. One group answered while staring at a blank screen, one answered with their eyes closed, one answered while viewing a screen with images on it, and a final group answered while staring at a blank screen—but while simultaneously listening to words in a foreign, unfamiliar language. Those from the first two groups were able to answer questions with significantly more accuracy, suggesting that visual—and audio too, but desktop backgrounds don't make noise—stimuli are distracting.

Entrepreneur, in conjunction with productivity app Taskworld, took the liberty to detail how different colors affect workers and their respective performance. We understand that staring at a single color for eight hours is downright boring, so compromise, and check out these aesthetically minimalist desktop backgrounds. Blue is a "stable and calming color" that helps workers stay concentrated on a singular task. So if you find your mind wandering, pick a blue background. It'll help focus your mind. 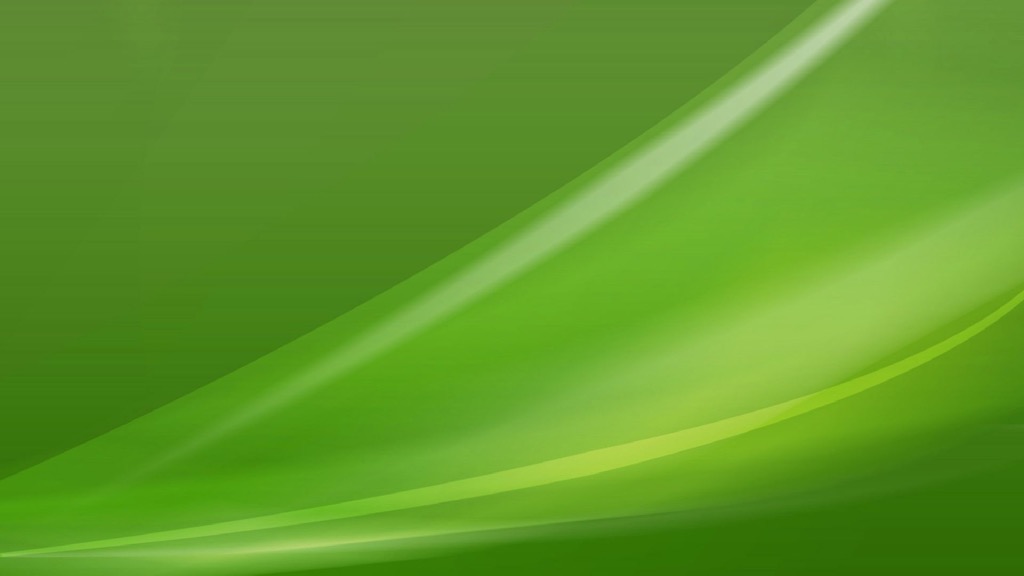 For you workaholics out there, a green background is the way to go. Green doesn't cause your eyes to fatigue. (Blue light, on the other hand, puts strain on the eyes—and disrupts your natural sleep cycle.) Set your desktop to green and you can work as many hours as you like. 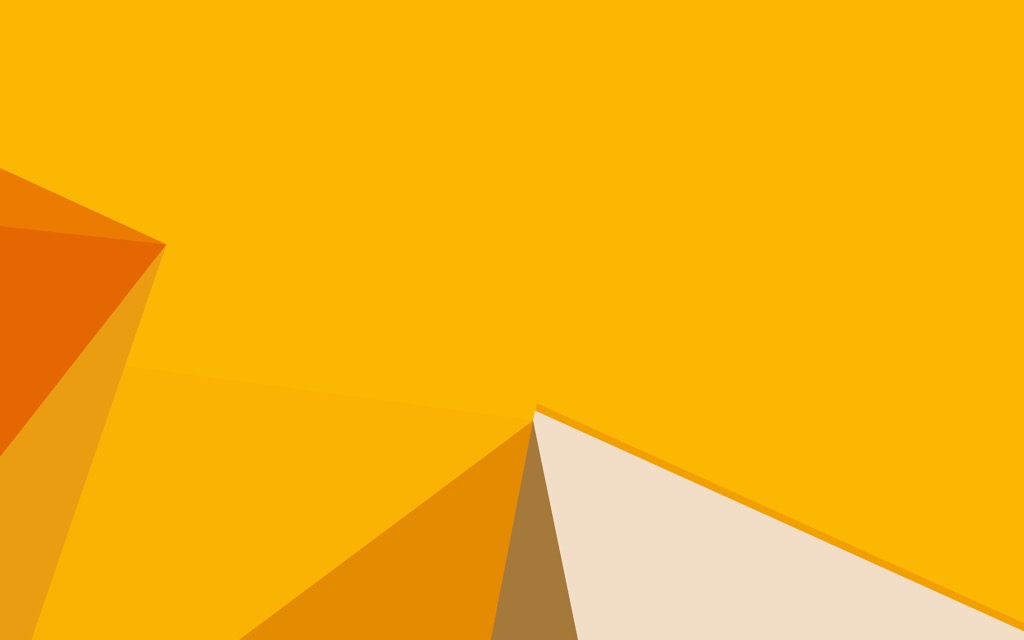 Yellow is well known to boost optimism and "stimulate creativity." If you find yourself suffering from the dreaded writer's block, or find yourself frequently down in the dumps, infuse some yellow into your desktop backgrounds. 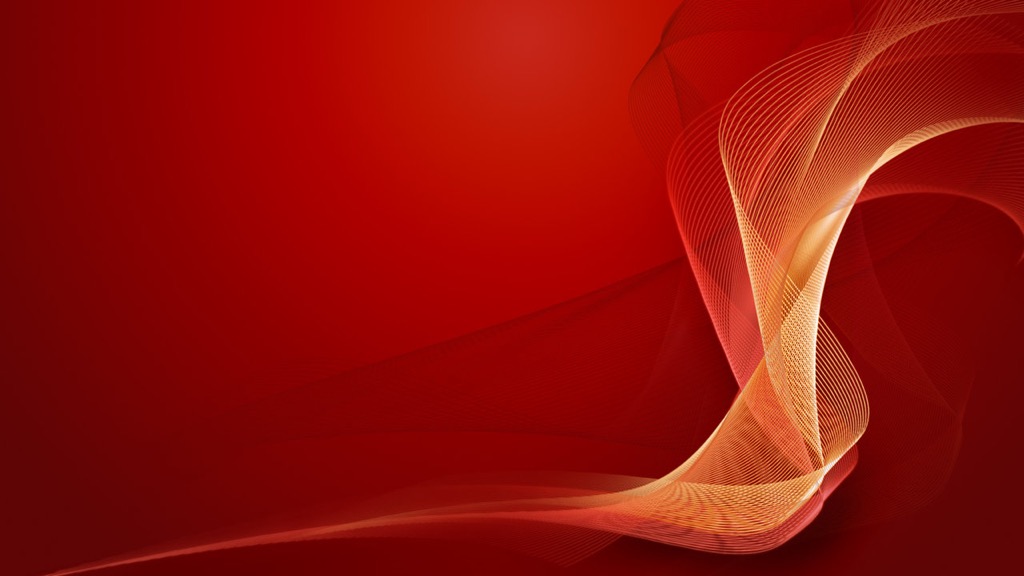 Fact: everyone looks good in red. But the seductive color has other benefits: it's been proven to increase heart rate and stimulate blood flow. And you know what that means. 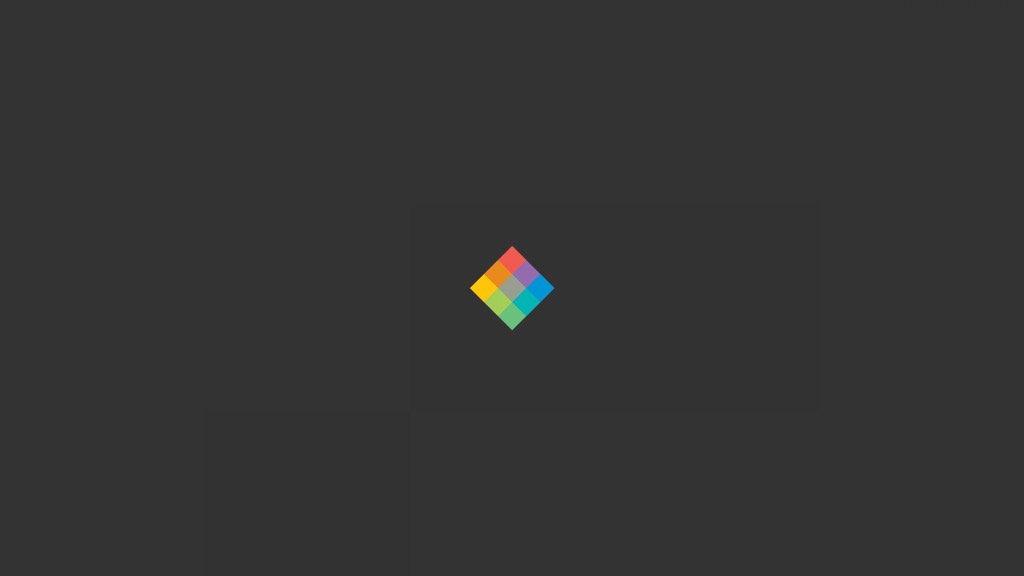 For the indecisive ones out there.

Ari Notis
Ari is an editor specializing in news and lifestyle. Read more
Filed Under
Mental Health • Office Life • Stress Relief • Tech and Gadgets
Read This Next
Latest News
Read This Next