Monopoly is officially out—and these games are here to take its place.

Planning a successful family game night is easier said than done. First of all, your family likely spans several generations, which means you've got to cater to a range of interests and direction-following abilities. And second, a lot of the family games on the market these days are just plain boring.

That's why we've rounded up the top family games in each category, from card games and trivia games to word games and music games. Whether you're searching for an action-packed party activity or an alternative to your usual Friday night Monopoly rut, we've got you covered. 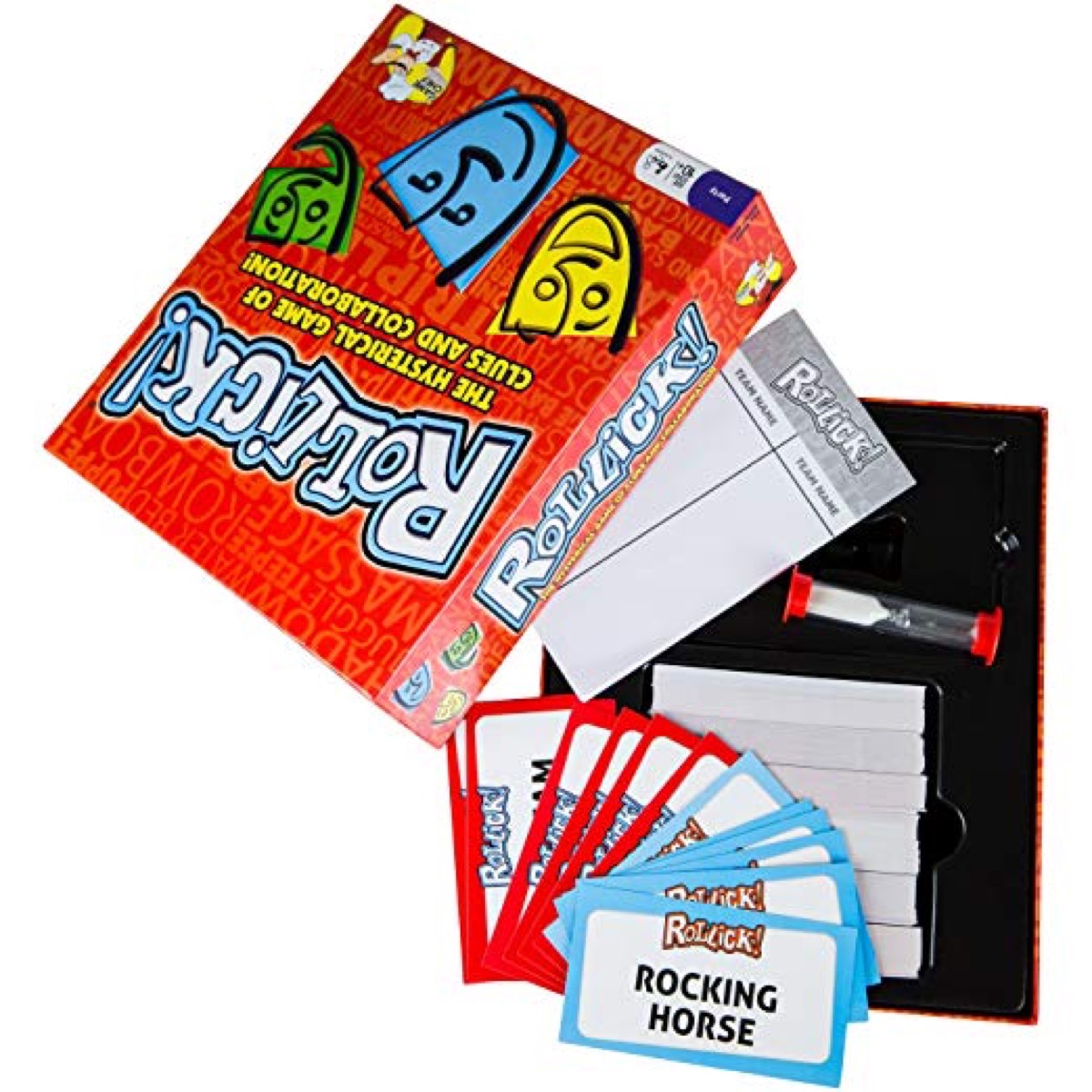 If you love getting on your feet and laughing out loud during family games, Rollick! will soon be one of your favorites. Rollick! draws on classic team-based charades with fun variations, like playing backward or in reverse. The game comes with a whopping 756 clues, a one-minute timer, and a score sheet. It's perfect for families big and small and keeps younger kids as entertained as teens and grownups. 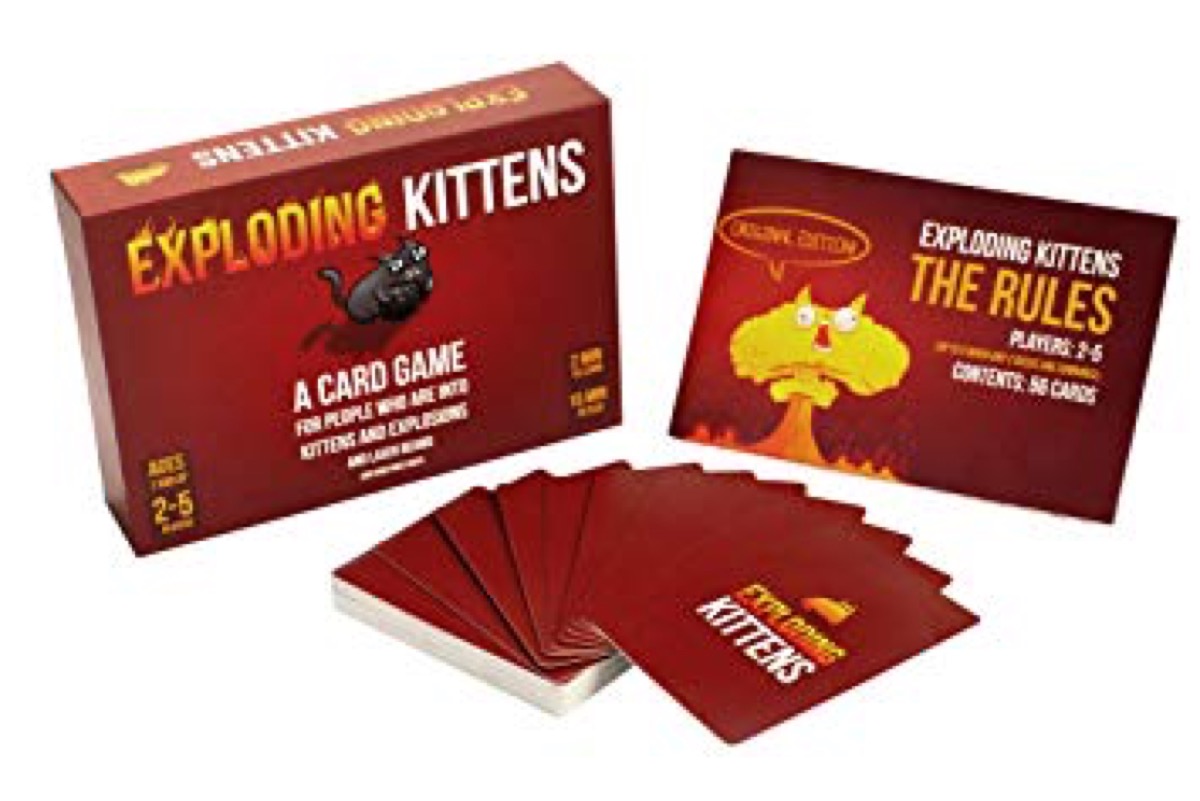 The Exploding Kittens card game is stunningly simple and wildly popular—it was even named the most-backed project in the Kickstarter history. The object of the game is clear: Each player takes turns drawing cards until someone draws an exploding kitten. When that happens, they're out. Of course, there are a few strategic ways of saving yourself from these dynamite cats, but that's for you to figure out. You can play with between two and five players, and despite the explosions, it's appropriate for all kids of ages. 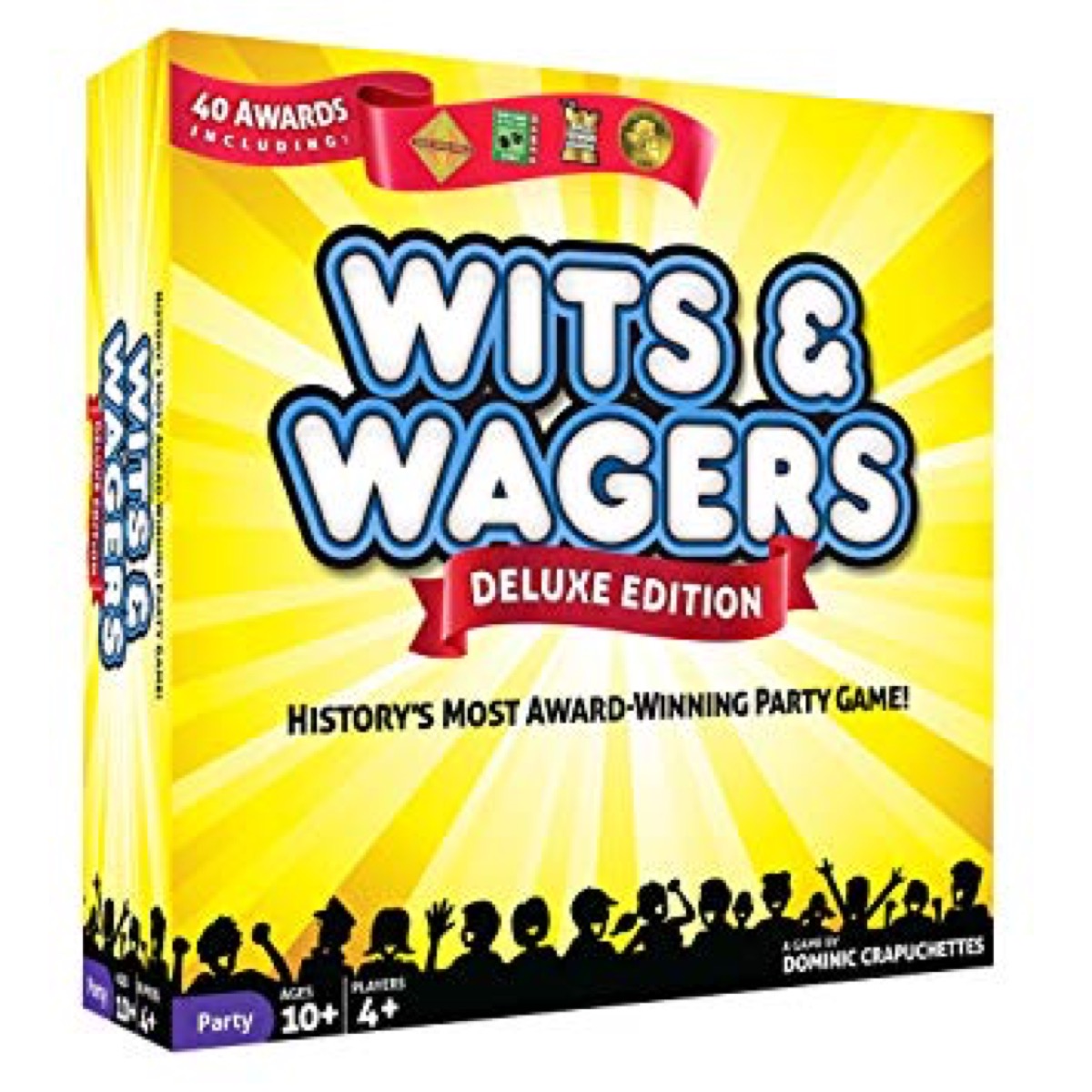 If your family is a pack of trivia buffs, Wits & Wagers should definitely be on your list of the best family games to play this year. This trivia game goes far beyond basic movie questions and historical facts; it also draws upon your knowledge of the other players. After you write down your own answer to a question, you'll bet on other players' answers with gaming chips. It's a great way to get to know each other better and also learn some fun new trivia along the way. 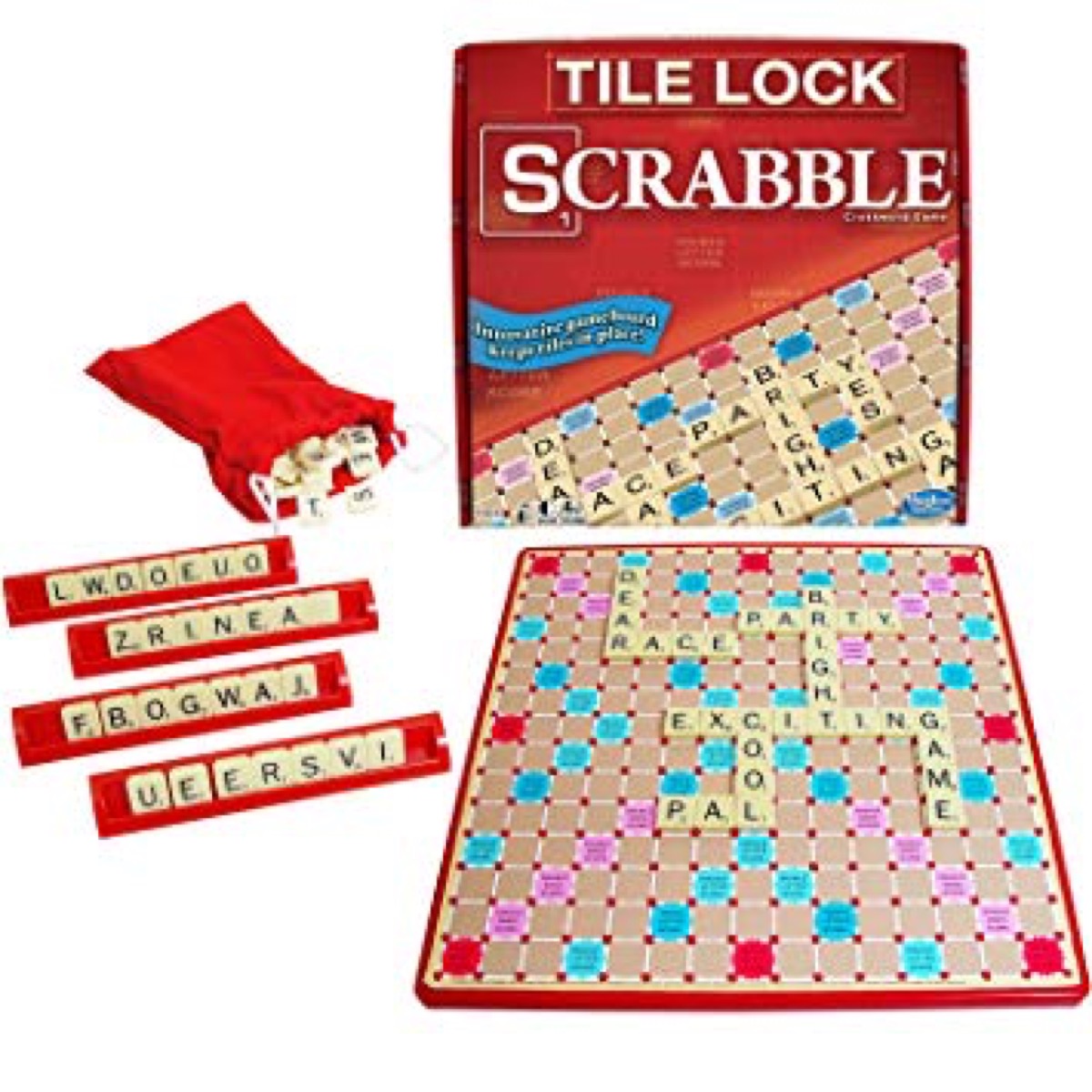 You already know Scrabble as the classic word game that calls on both your extended vocabulary and your ability to strategize. But it's always been a bit unwieldy—if a toddler or the dog (or, let's face it, your elbow) gets near the board, the entire game is ruined. Winning Moves' Tile Lock Scrabble has a unique new design that keeps the letter tiles firmly in place, so you can enjoy this family game with a newfound peace of mind. 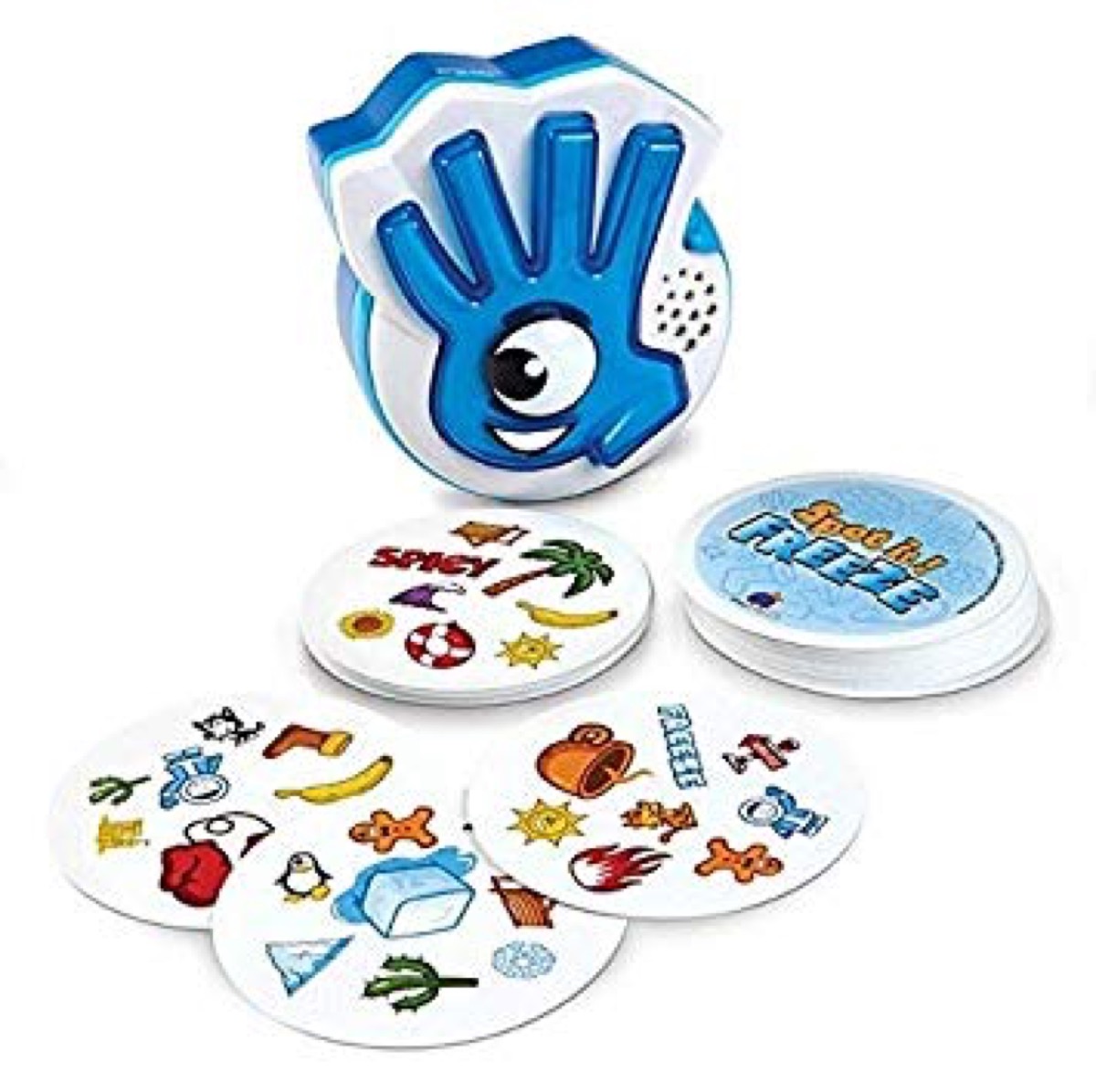 Spot It! is a matching card game with a number of fun variations, so you can customize your gameplay to your family's size and the ages of each of the players. Essentially, each card features several images and every pair of cards features one image overlap. When it's your turn, it's your job to "spot" that overlap before time runs out. You can play for minutes or hours, making it the perfect game to play anywhere from a doctor's office waiting room to an hourslong road trip. 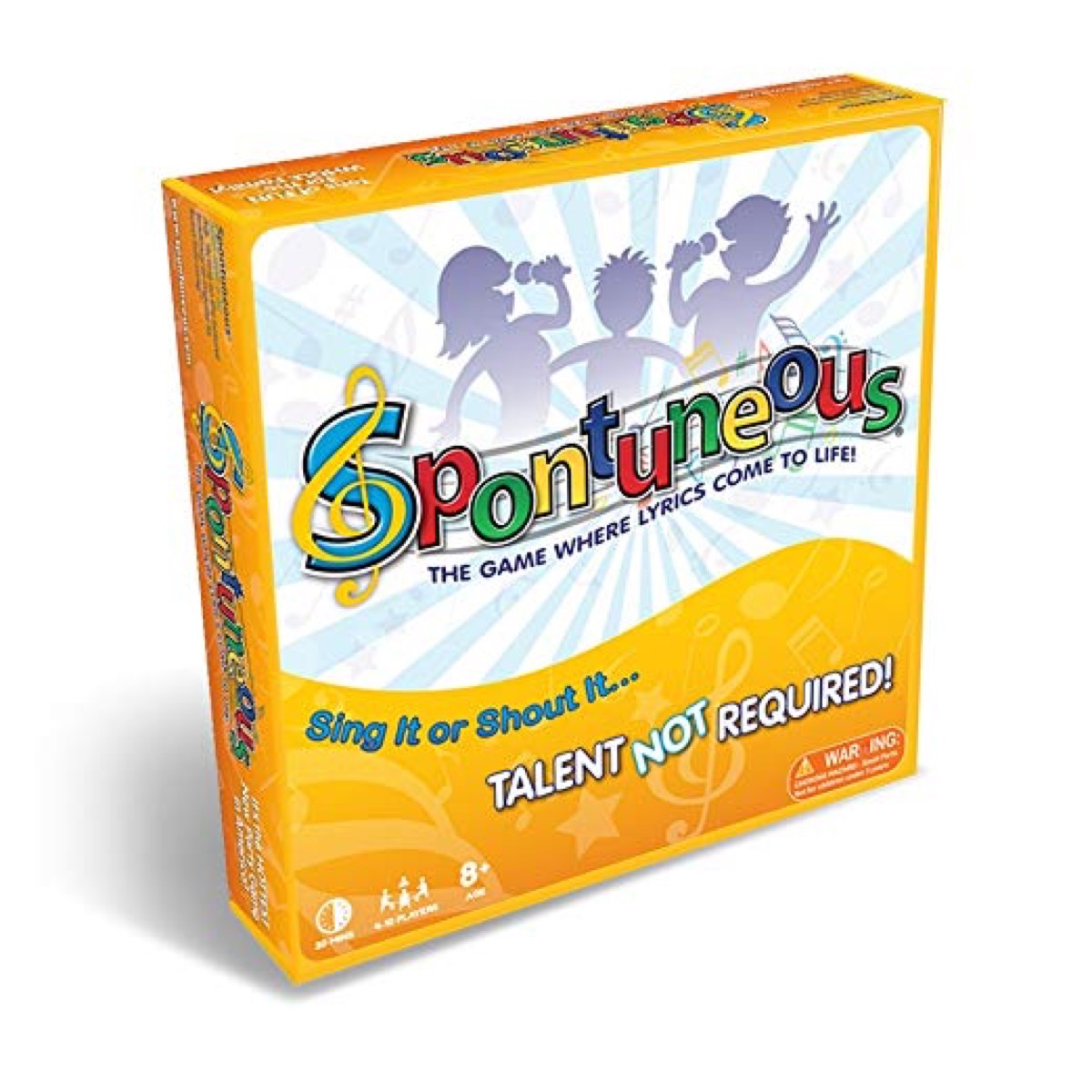 Whether you're an ultra-musical family or your crew can't carry a tune, this family game will have you laughing out loud as you try to stump each other with song lyrics. In Spontuneous, each player writes down "trigger words" that serve as inspiration for other players to break out in song. If the other player can't sing five words of a song that uses your chosen "trigger word," you win! You can play Spontuneous with four to 10 players, and it's best for kids and adults ages eight and up. 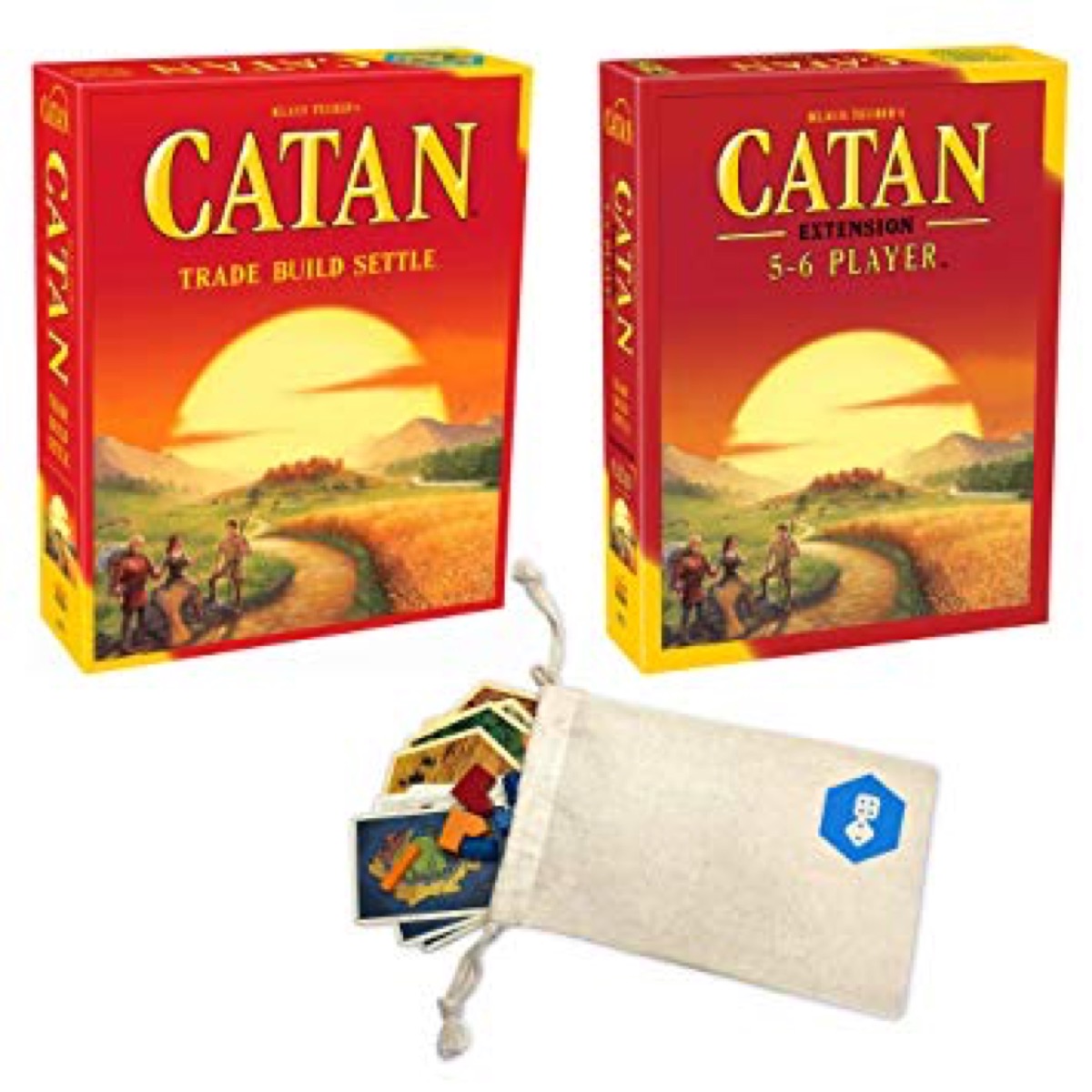 The engrossing Catan board game has developed a cult following since it was first released in 1995. Players assume the role of settlers of the island of Catan and take turns building settlements and finding resources. The game is designed so it's completely different every time, meaning it doesn't get boring or repetitive quickly. And while there are some elements of luck in the game, it also requires a ton of strategy. 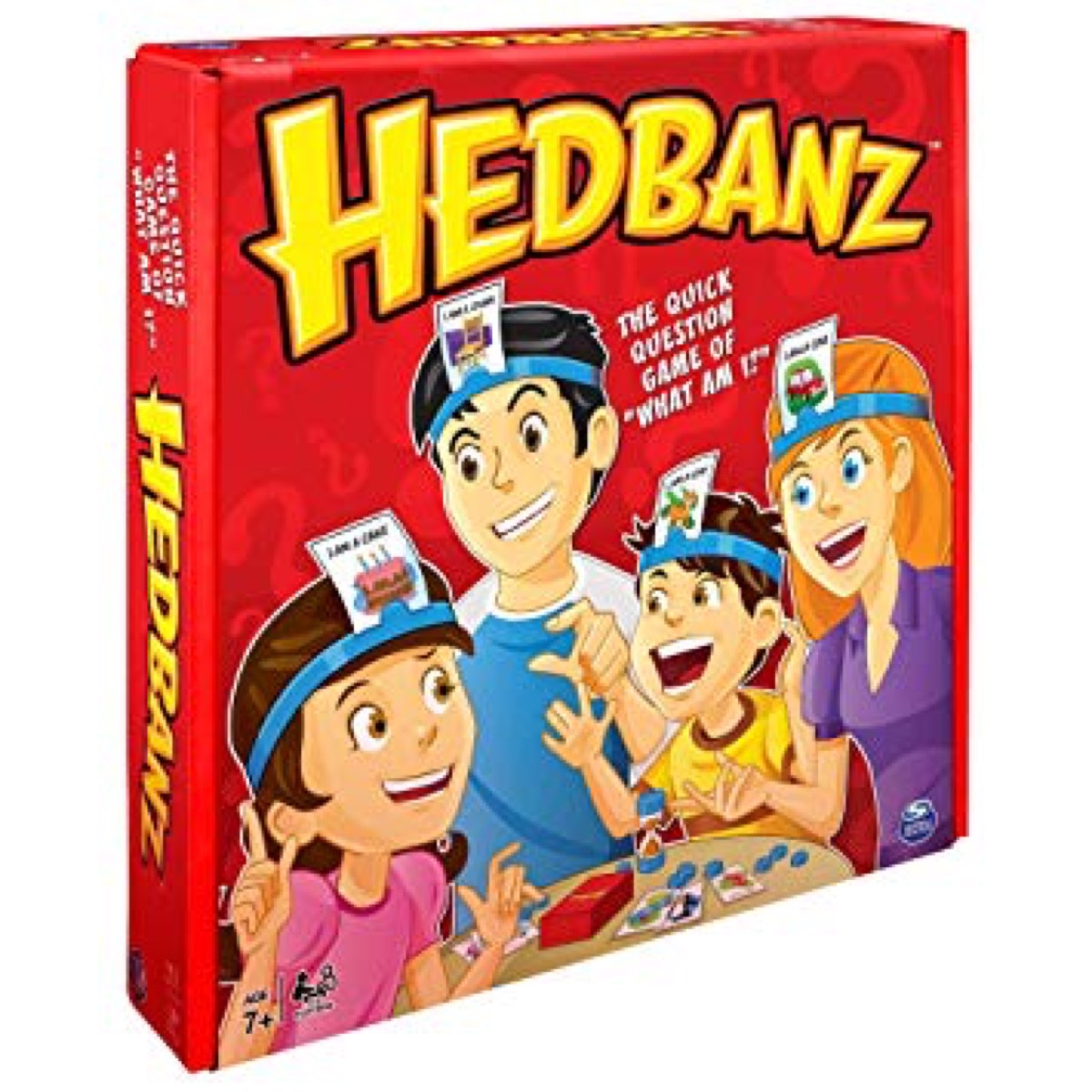 It's often difficult to find a family game that's fun for everyone. But Hedbanz manages to be simple enough for small children to understand and action-packed enough to engage adults as well. In Hedbanz, you'll attach a card with a cartoon on it to your forehead and ask, "Who am I?" Other family members will give you hints and clues for one minute before you have to venture a guess at your identity. 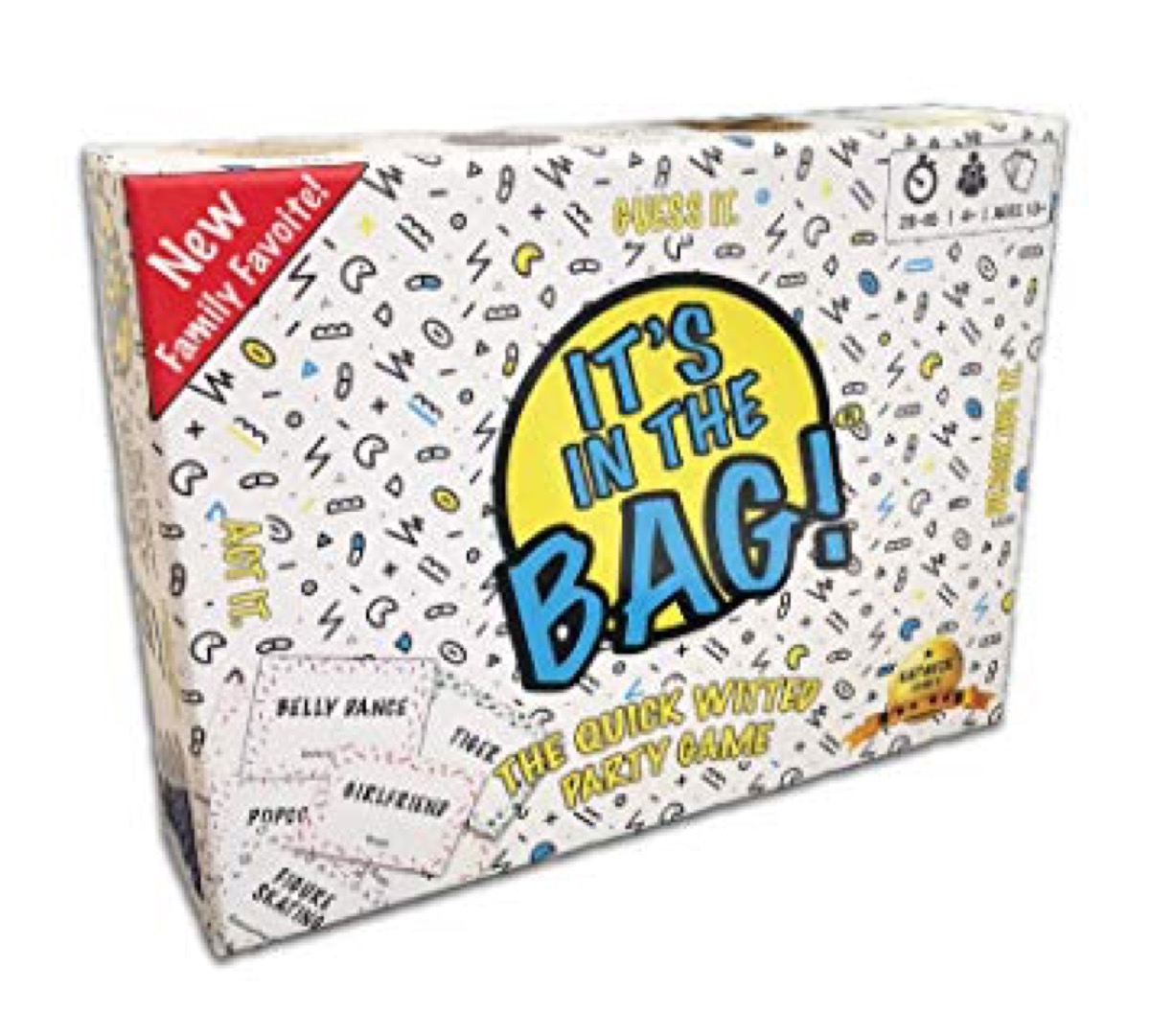 Best Game for Big Families: It's in the Bag!

It can be hard to find a great family game if you've got a massive brood or a big event coming up where extended family members will all want to join in. It's in the Bag! is the perfect solution to your dilemma, as it can be played by up to 20 people! In this team game, you'll receive a set of words in a bag. Your team members will have you guess each word using three strategies: "describe it" (talking about the word without saying it), "define it" (using synonyms), or "act it" (classic charades). 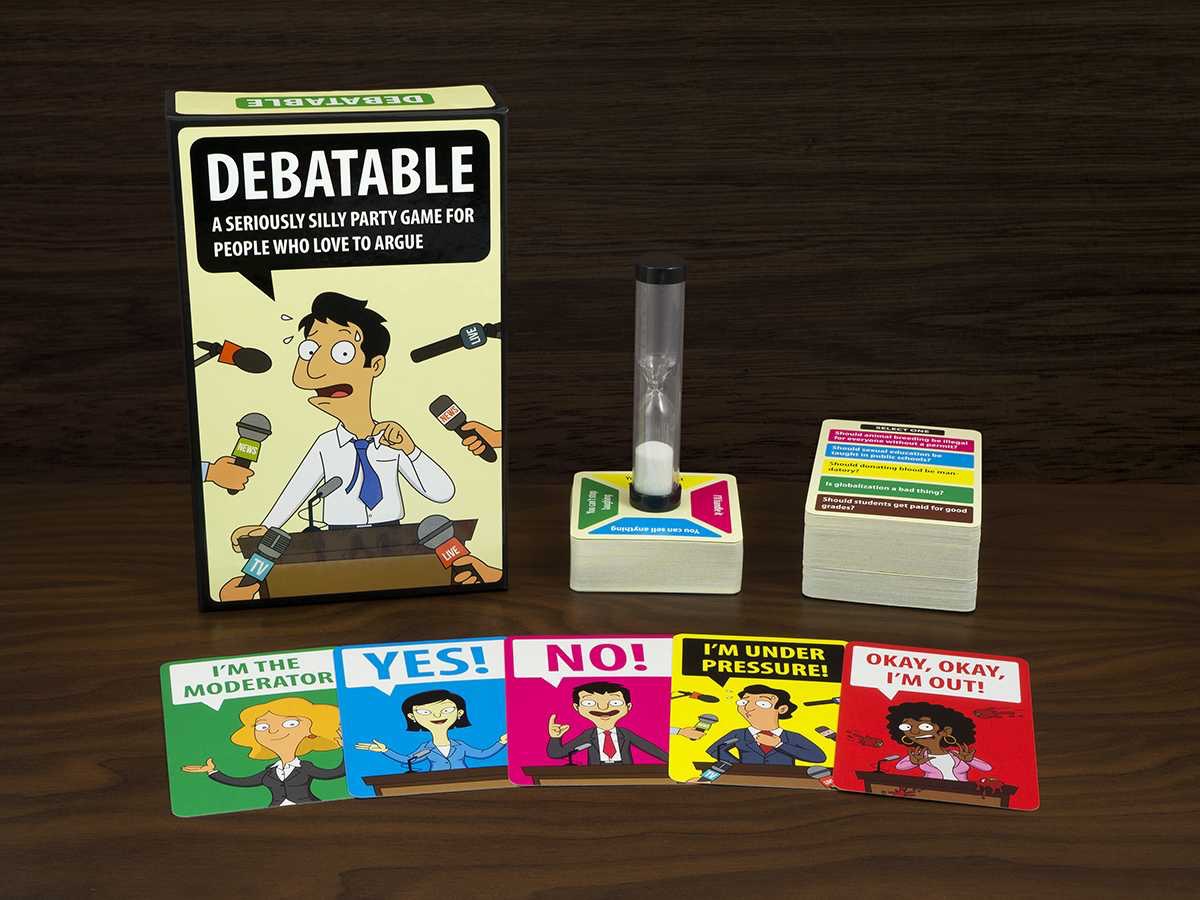 Does your family like to disagree? Then Debatable is one of the best family games to play this year for your argument-prone squad. To start, two players are given a topic to debate. (The questions range from silly to serious. For example, "Is sending humans to Mars a waste of money?" And "Should all big life decisions be based on your horoscope?") When they've each made their argument, the other players must decide who won. You can play Debatable with between three and 16 players. 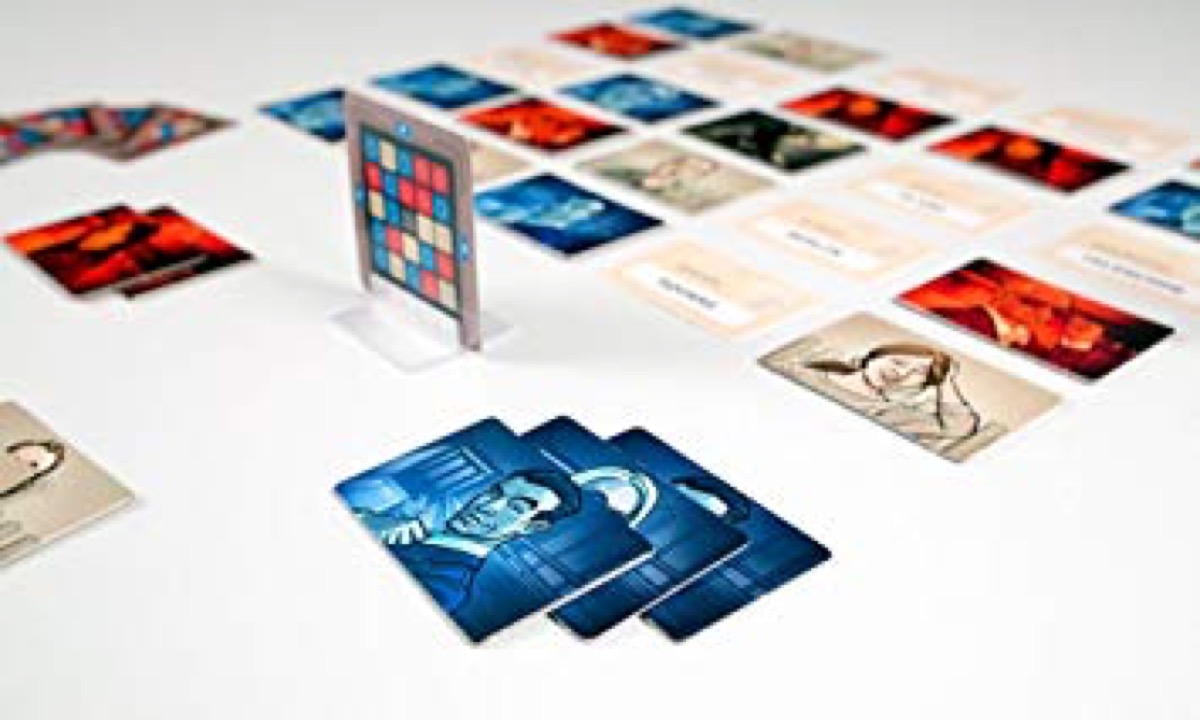 If your family likes riddles, puzzles, or escape rooms, you'll love a round of Codenames. To play this game, two members of your family will become rival spymasters who know the secret identities of 25 agents. Meanwhile, their team members know said agents by only their codenames. You'll use one-word clues to make contact with as many of the 25 agents as you can while avoiding your team's words and the unknown assassin. 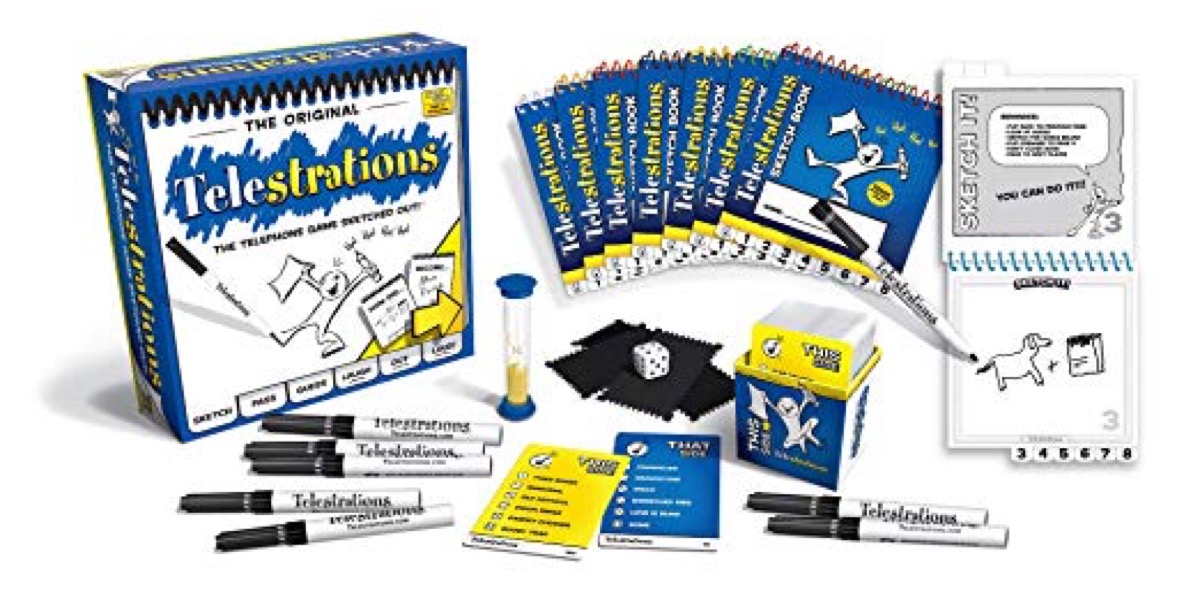 Telestrations is one of the best family games whether your family is full of artists or, well, not so full of artists. In fact, the game might be even more fun (and a lot funnier) if you're not exactly aesthetically inclined. Telestrations is an amped-up version of Pictionary, in which your family will use dry erase markers and whiteboards to draw your interpretations of a series of words and phrases before other players guess at their meanings. The results are often absolutely hilarious, especially if your drawings got a little off track! For the games you definitely don't want to buy (but should definitely laugh at), learn the 30 Hilariously Bad Board Games of All Time.