The incident took place ahead of the Thanksgiving holiday on a JetBlue flight.

With the busy holiday travel season now in full swing, the Transportation Security Administration (TSA) will see more and more people passing through its security checkpoints. The agency is always evolving its practices to increase security—and efficiency—when traveling, including recent updates to the TSA PreCheck program and updated screening processes. But after an incident last week where a man managed to sneak a straight-edge razor onto a flight, the agency is making changes. In the aftermath, TSA announced that it will be deploying "new x-ray technology" at checkpoints across the country. Read on to find out how TSA is working to prevent future incidents.

READ THIS NEXT: TSA Is Making Another Major Change to Airport Security.

A threat was reported on a JetBlue fight last week.

If you've ever made your way through an airport security line, you have a general understanding of what can and can't be brought with you. The 3-1-1 rule for liquids always applies, and anything dangerous will be confiscated and could also land you in legal trouble. Nevertheless, potentially problematic items do sometimes make it through.

On Nov. 21, 41-year-old Merrill Darrell Fackrell boarded a JetBlue flight at JFK Airport in New York, per a press release from the U.S. Attorney's Office, District of Utah. Fackrell was seated next to a married couple, and during the flight, he "placed his hand in front of the woman's screen and told her to pause her movie," the press release states, citing the criminal complaint filed by the United States Attorney's Office. The woman then removed her headphones and noticed that Fackrell was holding "what appeared to her as a knife, inches from her skin at her throat/neck area."

According to the allegations in the complaint, the woman's husband was able to notify at flight attendant at the front of the plane, and the woman "lunged for the aisle to escape," evading Fackrell's attempts to stop her. Members of the flight crew secured the item, which was identified as a straight-edge razor with a wooden handle and a one-to-two-inch blade.

"Crewmembers responded by working to de-escalate the situation and notified law enforcement who met the flight in Salt Lake City," JetBlue said in a statement to ABC News. "The safety of our customers and crewmembers is JetBlue's first priority, and we will support law enforcement during their investigation."

TSA said it's being proactive in preventing future incidents. 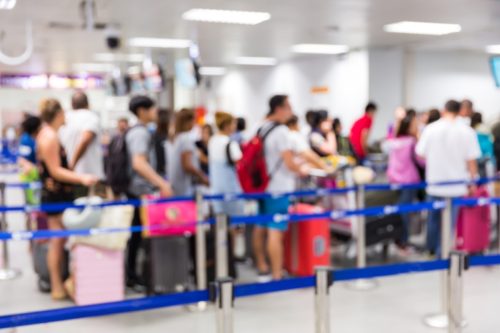 A motive for the incident has yet to be announced, but Fackrell was charged with Carrying a Weapon on an Aircraft and Assault with a Dangerous Weapon in the Special Aircraft Jurisdiction of the United States the following day, Nov. 22. How exactly the razor blade made its way through security is also unclear, but TSA confirmed it's not taking the situation lightly.ae0fcc31ae342fd3a1346ebb1f342fcb

In a statement provided to NBC News, the agency said it is "introducing new x-ray technology at more airports to improve our capability to better detect items such as the one used in this incident." While the agency did not provide additional details on the technology, earlier this year, it debuted new full-size computed tomography (CT) scanning machines.

"The technology is similar to CT technology used in the medical field and research shows that CT is the most consequential technology available today for airport checkpoints," according to TSA's website. The machines are being rolled out "airport by airport," replacing existing advanced technology (AT) machines, The Points Guy reported in April.

The technology enhances the screening process.

Screening technology for carry-on bags was solely 2-D prior to the introduction of CT, which can now produce 3-D, rotatable images, which is particularly helpful for "enhanced detection of threat items," TSA's website states. "Like existing CT technology used for checked baggage, the machines create such a clear picture of a bag's contents that computers can automatically detect explosives, including liquids."

Per the website, when CT is fully rolled out, it will also allow travelers to leave their laptops and liquids in carry-on baggage. At checkpoints equipped with CT, laptops are permitted to stay inside bags.

The security agency is worried about firearms as well.

Razor blades aren't the only dangerous item coming through checkpoints, as officials continue to find firearms in carry-on luggage.

On Nov. 29, TSA officials at Harrisburg International Airport in Pennsylvania were forced to remind passengers not to bring guns through security. In 2022, TSA has stopped 5,832 firearms at checkpoints, 88 percent of which were loaded, CNBC reported. This number is getting close to the 5,972 found in 2021, coming out to an average of 17 guns per day.

Records have already been broken this year in Harrisburg, where eight guns have been caught. At Tampa International Airport, a whopping 116 firearms have been confiscated, already up from last year's number of 105, Fox 13 News reported.

Travelers often claim the gun was left in their luggage accidentally, but Karen Keys-Turner, TSA Federal Security Director for Harrisburg International Airport, says that it's the owner's responsibility to know their firearm's location "at all times." It's worth it to be familiar with laws and regulations, as bringing a handgun to a security checkpoint can result in thousands of dollars of fines and removal of TSA PreCheck status.

According to TSA, even if you have a concealed weapons permit, the rules still apply, and guns must be "unloaded, packed in a locked, hard-sided case, and declared to the airline" at the ticket counter. The airline is then required to ensure that the gun travels in checked baggage "in the belly of the plane, never in the cabin of the plane."