Yes, there's a town out there with just one (1!) resident.

There's small-town America, and then there's seriously small-town America, where the entire population has been hovering in the single digits for the past couple of decades. (In one state, you'll find a town that's single-handedly run by an 84-year-old woman, who pays taxes to herself and serves as the town's mayor, treasurer, tavern owner, and librarian.)

Based on the Census Bureau's 2017 population estimates, these are the 50 most minuscule towns quietly tucked away in our country. And no, you won't find any unincorporated "towns" like Chevy Chase Section Five in middle-of-nowhere Maryland in these here parts. These are all the real deal. And for more insight into the small town American life, don't miss 30 Things That Always Annoy People in Small Towns.

Located right on the edge of Ringgold County, Beaconsfield incorporated as a town in 1990. Its population is going strong at 15 people. And for more on some of America's most breathtaking locations, check out 17 American Towns So Beautiful You'll Think You're in Europe. 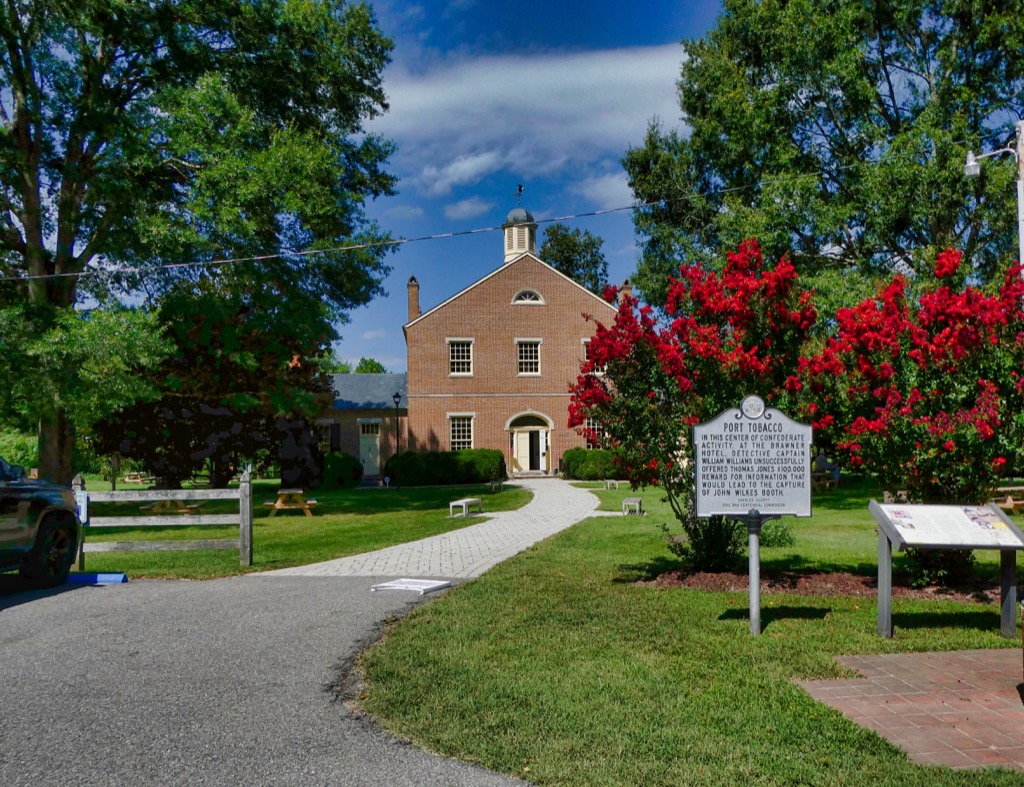 Fifteen people reside in this charming southern Maryland town, making it the smallest incorporated town in the state. And for ideas on some other fascinating places you should definitely pay a visit to, check out 30 Enchanting Hideaways in the U.S. You've Never Heard of.

There's not much to see in Kief, population: 14, beyond its quaint city hall building, pictured above. And for more on how our nation's locations stack up, don't miss The 50 Worst Cities to Drive In. 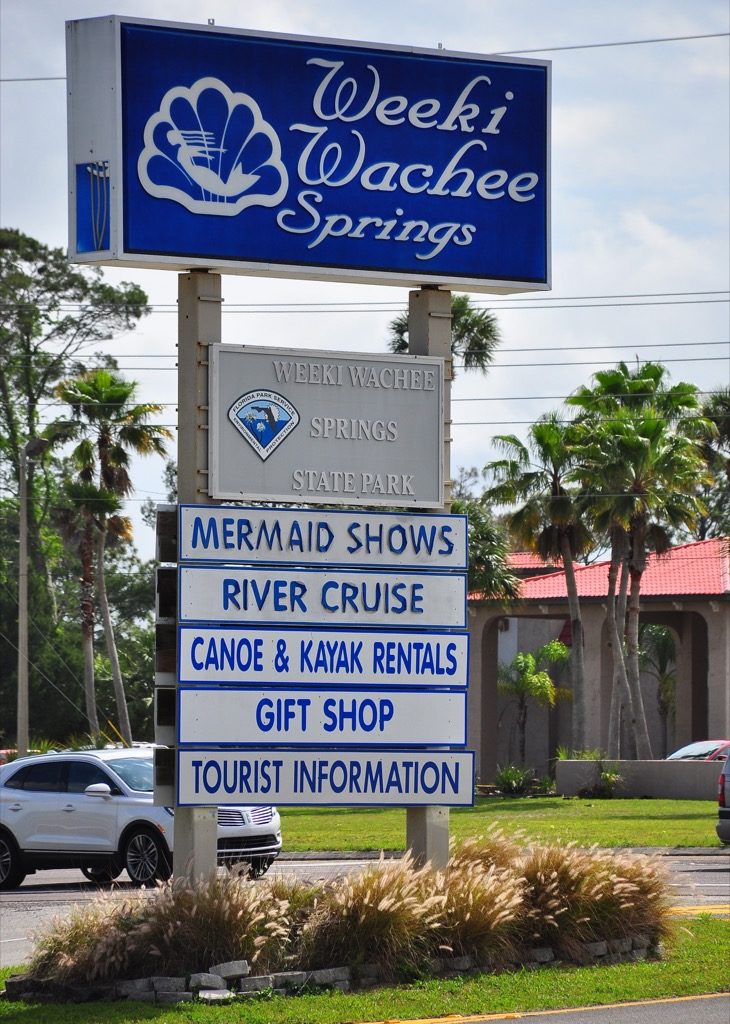 Established in the 1950s by a creative entrepreneur, this Floridian hideaway was originally home to a "mermaid show" and even once held the distinction of being home to more "mermaids" than humans. Its population now rests at 13 (humans, that is, not mermaids). 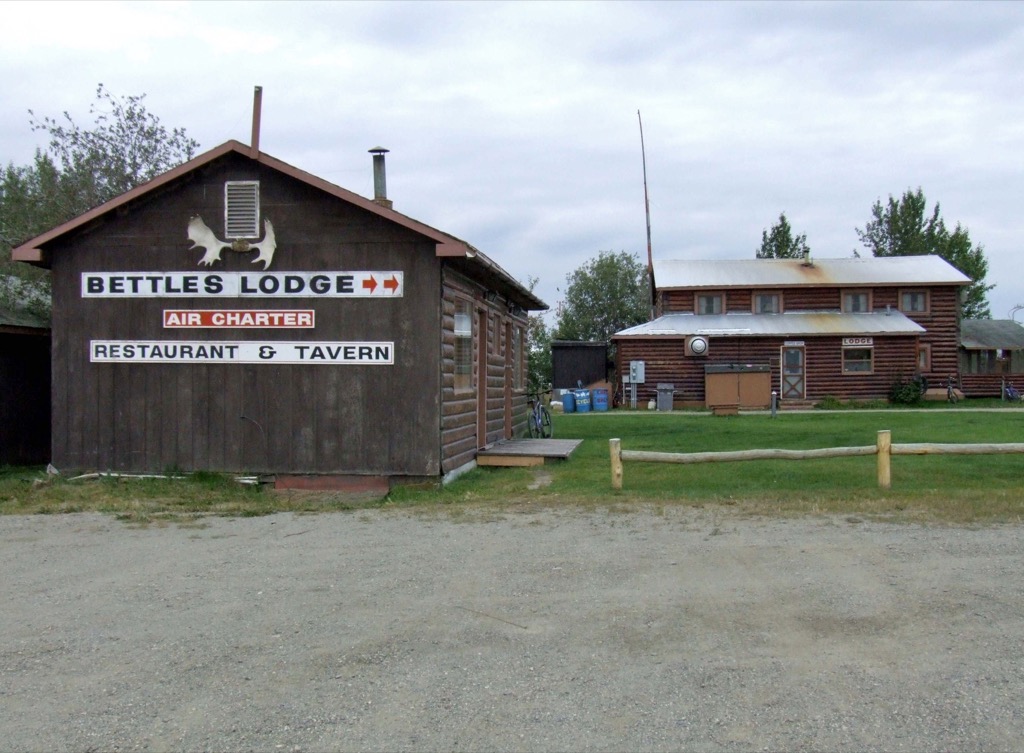 Located in Alaska's Yukon-Koyukuk Census Area, Bettles has a population of 13.

Near the northern edge of North Dakota is Hansboro, the humble home of only 13 people.

Bill Bangert, a former St. Louis Golden Gloves champion, had high hopes for Champ when he helped to found it in the 1950s, envisioning it would one day be a bustling city with an Olympic-class stadium. But that fate wasn't in the cards for this town, which now has a population of 13 people. 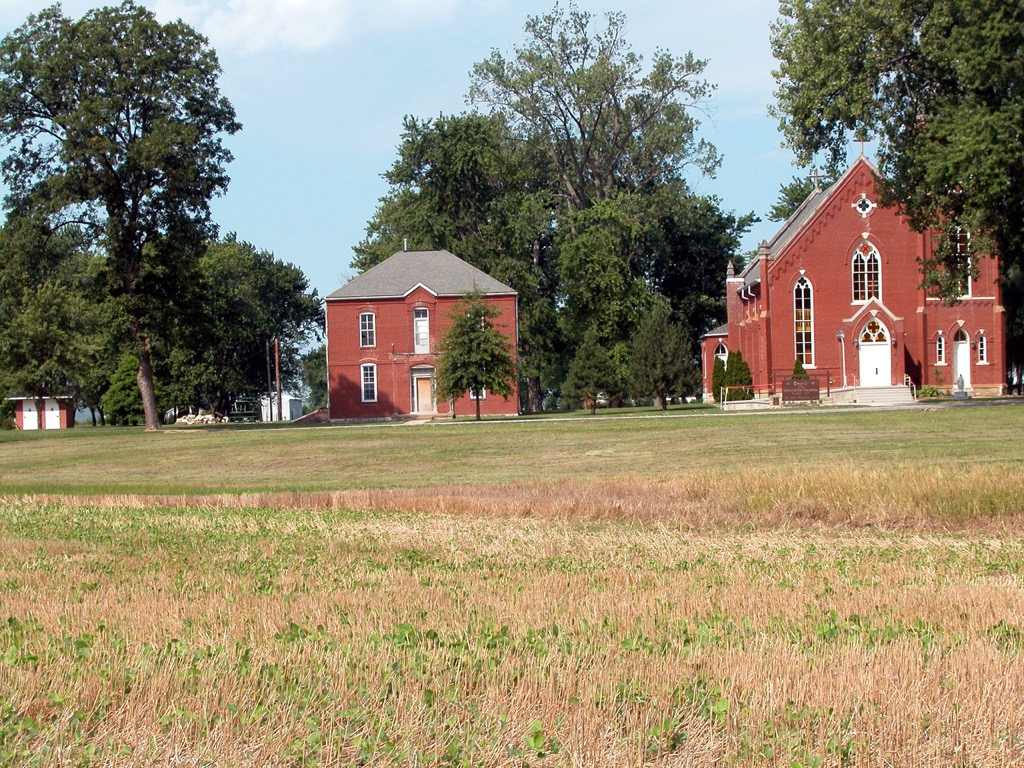 Incorporated in 1818, Kaskaskia is now home to a scant 13 people.

Once a quaint, charming railroad town, Cedar's population has now dwindled to 13 people.

This Nobles County pit stop—where only 12 residents live—was founded in 1896.

The Great Forks Herald reports that, sadly, Churchs Ferry lost its sole church during a terrible 2011 flood. A total of 12 people now reside in this tiny North Dakota town. And for more on some slightly more populated locations across the U.S., don't miss The 50 Most Caffeinated Cities in America.

Incorporated in 1880, Valley City, Illinois, now has a population of 12.

According to the Oklahoma Historical Society, the residents of Loveland originally wanted the town to be called Harriston, but begrudgingly settled on Loveland in 1908 because the U.S. Post Office claimed their first choice was already held by too many towns in the state. Today, 12 people reside in the Tillman County town. 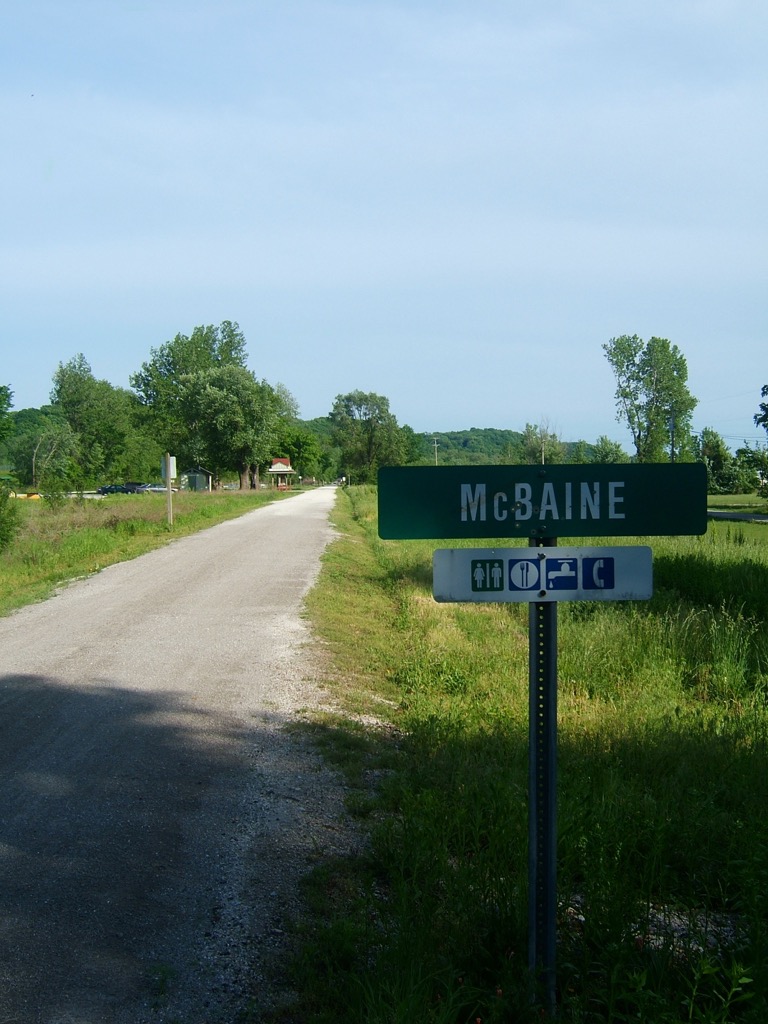 Featuring an Instagram-worthy harbor and, well, not much else, this Suffolk County town has a population of 11.

Though only 11 people officially reside in Pine Valley, New Jersey, the Camden County town receives a slew of visitors at its acclaimed golf course. 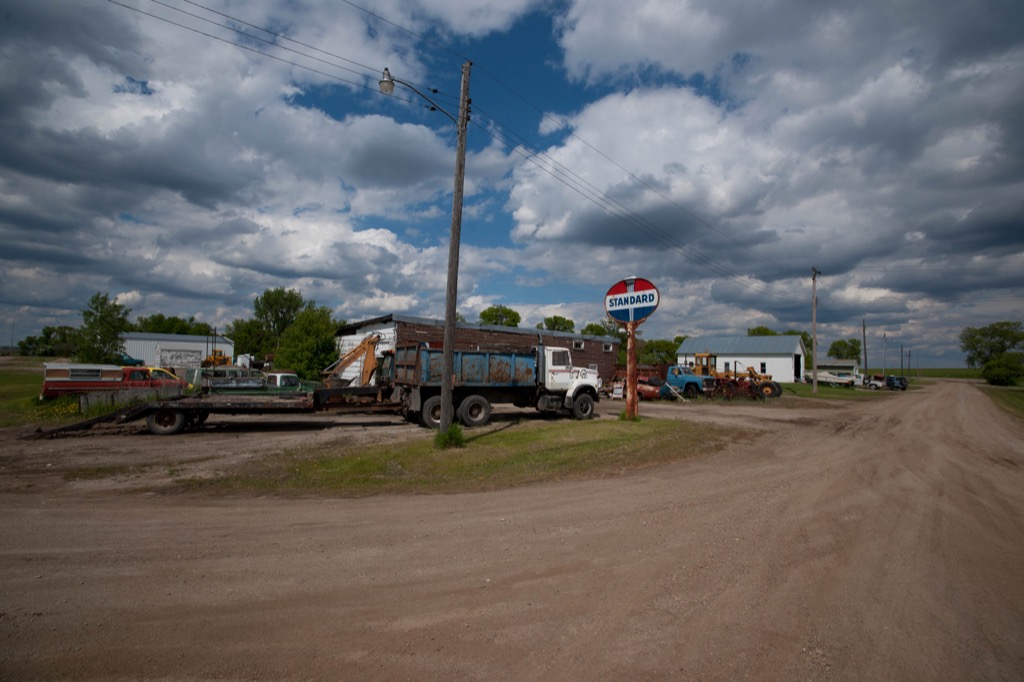 You'll find no Pillsbury Dough Boy here! Just a handful of people—11, to be precise—live in this Barnes County town. 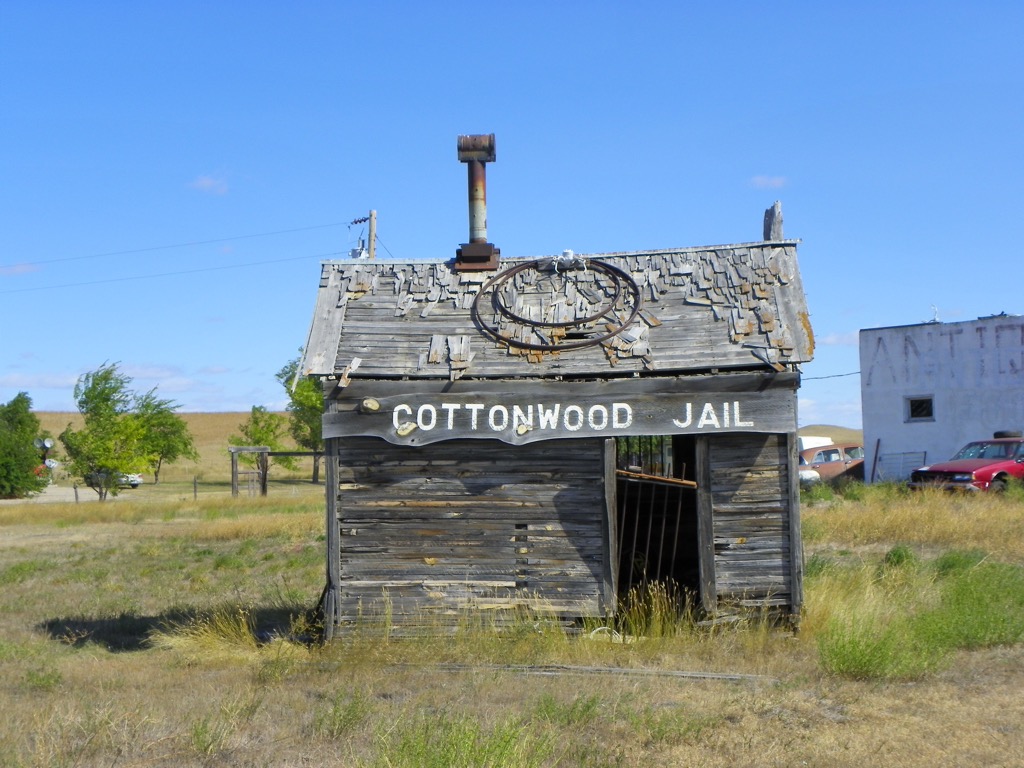 With a population of only 10 people, there's probably not much need for Cottownwood, South Dakota, to update their ramshackle jail (pictured above), which just might date back to the town's founding in 1906. And for news on how the residents of South Dakota like to spend their time, don't miss The Weirdest Summer Tradition in Every State.

Aptly named for its proximity to the Missouri River, this town is the only portion of Jackson County located north of the river. Ten people call River Bend, Missouri, their home.

Founded in 1905, this Nebraskan town has a population of 10 people—who are far outnumbered by the surrounding cornstalks.

Incorporated in 1920, Farmer, South Dakota, is going strong with a population of 10 people.

A charming farming community, Waldron, Kansas, which rests on the southern border of Harper County, is home to 10 residents.

Only 10 people make use of this Oklahoma town's large grain elevator, pictured above.

After suffering a series of hardships, including being forced to flee the massive amounts of flooding their town experienced during Hurricane Katrina, only nine people returned to live in McMullen, Alabama.

If nothing else, Grano, North Dakota, can offer passerby the option of a Coke or a Pepsi from the town's not one, but two vending machines—and if you're lucky, maybe the opportunity to visit with one of the town's nine residents.

All is tranquil in Missouri's Peaceful Village, a town that includes a church campsite and a population of nine people. The St. Louis Post-Dispatch reports that the village incorporated in 2008 so the campsite owner could have a more streamlined process for accessing the government in order to make improvements and changes to his property.

When your town only has a population of nine people like Loraine, North Dakota, does, three buildings are all you need. And for more on our nation's quirks, don't miss The Weirdest Urban Legend in Every State.

Perth's town hall and grain elevator are major assets for the nine people who reside in the tiny North Dakota town.

This church might be small, but we reckon it's probably large enough for the eight residents of Bergen, North Dakota, to squeeze into its pews.

The eight-person community of Wetonka, South Dakota, is located in the southeastern edge of McPherson County. 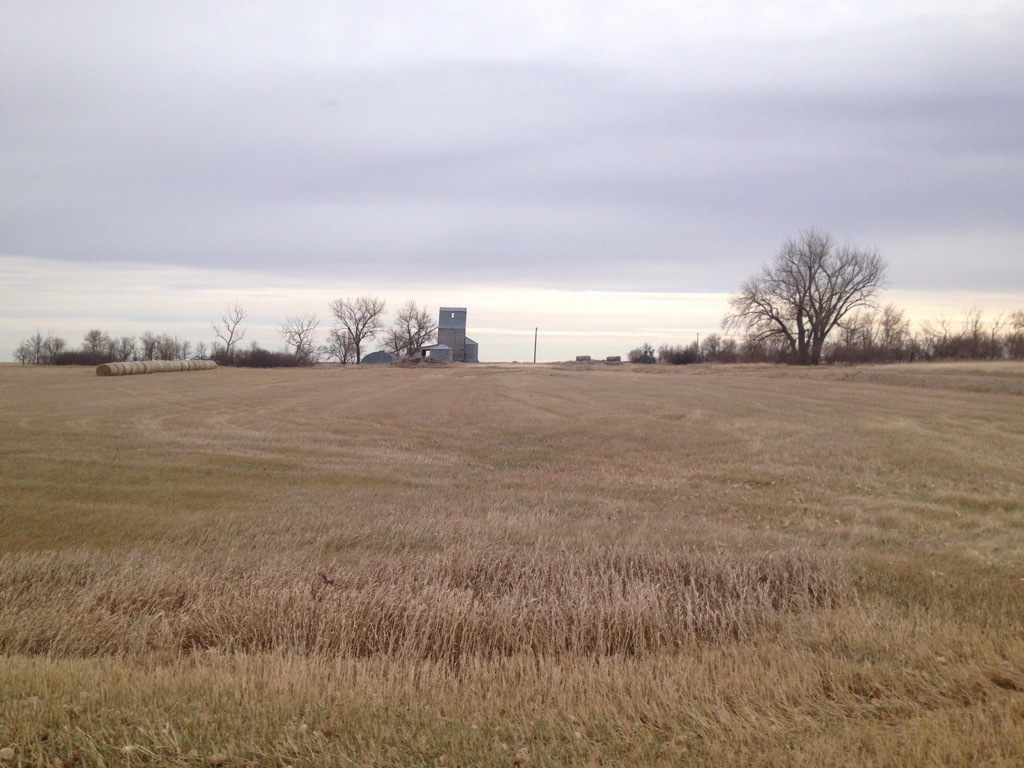 Prairielands are all you're likely to see in the town of Artas, South Dakota—but if you're lucky, you might catch a glimpse of one of the town's eight residents. 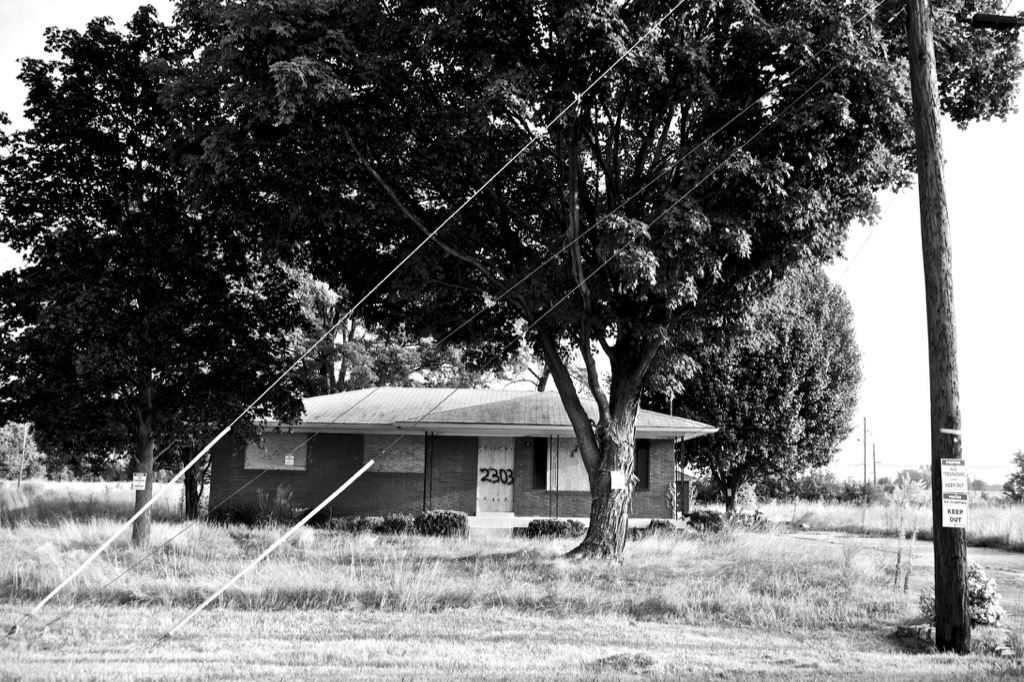 The population of South Park View, Kentucky, has steadily dwindled over the past few years, but the Jefferson County town is holding strong at a solid seven people for now. 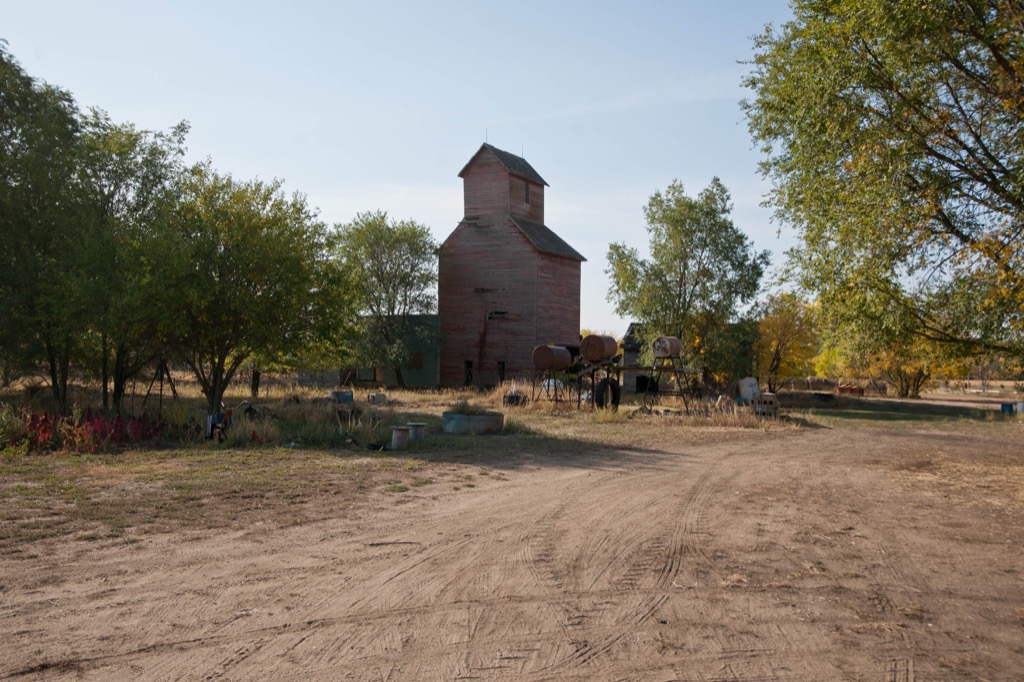 Though Lambert's population has severely dwindled since World War II, a resilient six people continue to live in the Alfalfa County town. 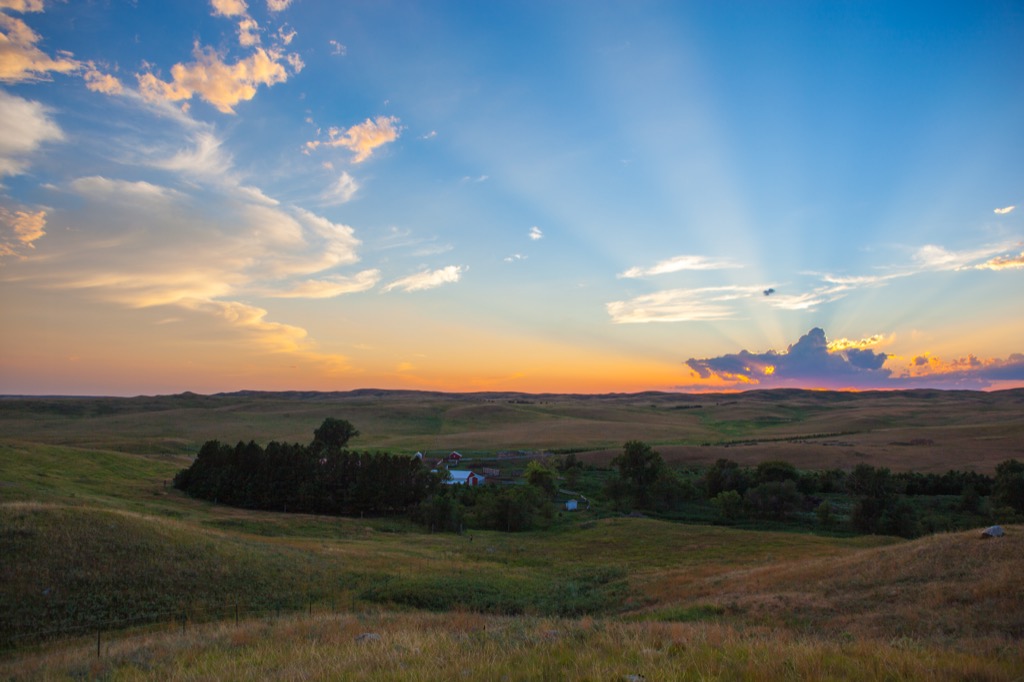 With only six people living in Lowry, you're guaranteed an unobstructed view of South Dakota's gently rolling hills—what's not to love?

A population of five people keep each other company in the small community of Funkley, Minnesota.

Tavistock, New Jersey, incorporated in 1921, consists of a country club and nothing else. It's home to just five people.

Once a "boomtown" with a bustling depot nestled right up against the Chesapeake & Ohio Railway, Thurmond, West Virginia, has outlived its glory days—though five people continue to call it home.

A total of five people reside in the close-knit Lincoln County community of Cave, Missouri.

As evidenced by the town's welcome sign, Verdon, South Dakota, is home to just five people. And if you're looking for locations that are slightly more thrilling, don't miss The Craziest Amusement Park Ride in Every State. 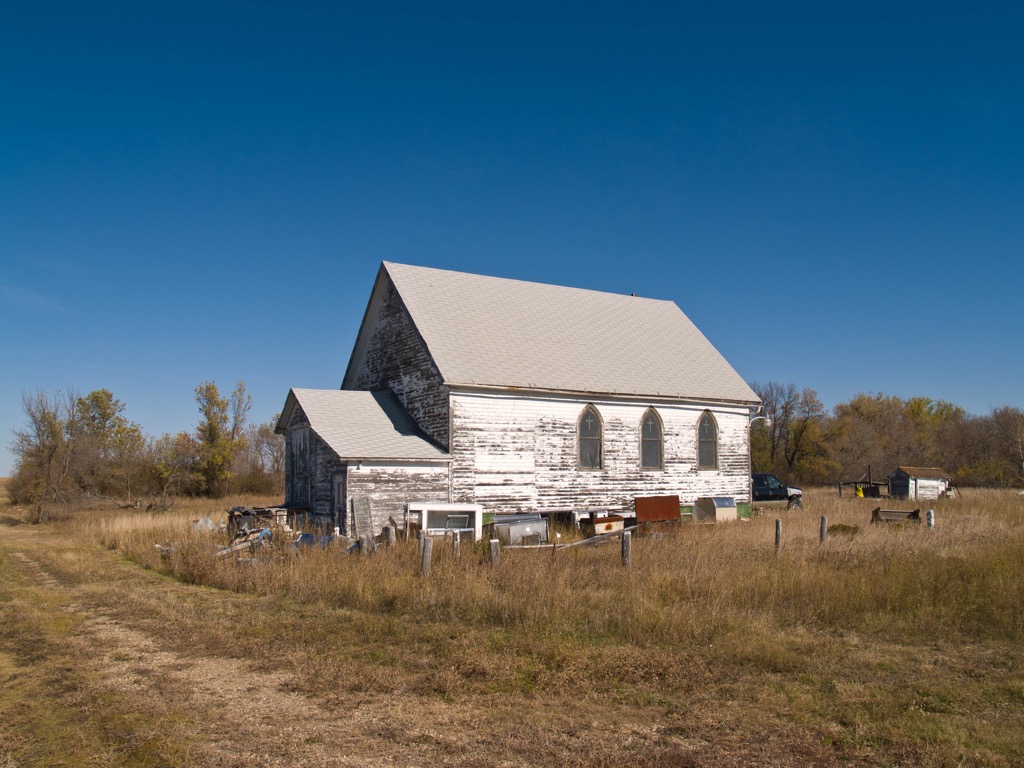 We're not sure just how long Ruso's clapboard church building has been weathering the North Dakota winds—maybe you can ask if you stumble upon one of the town's four residents. 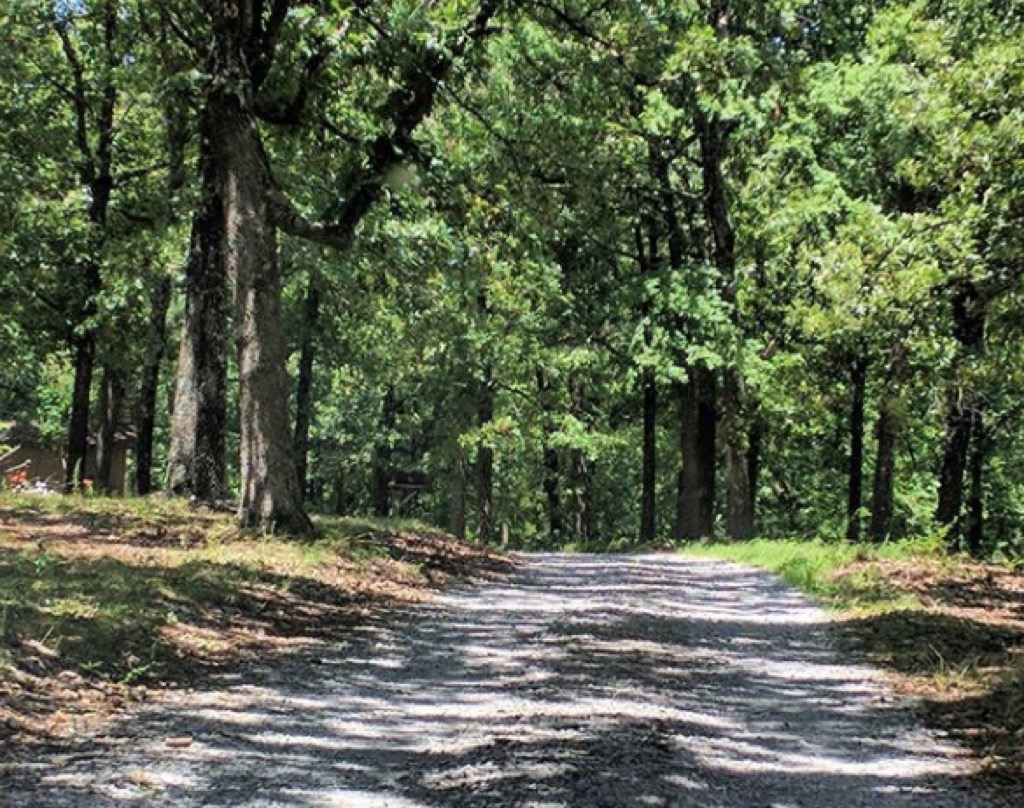 We're willing to bet the nocturnal birds outnumber the humans in Hoot Owl, Oklahoma, with its population of just four people. 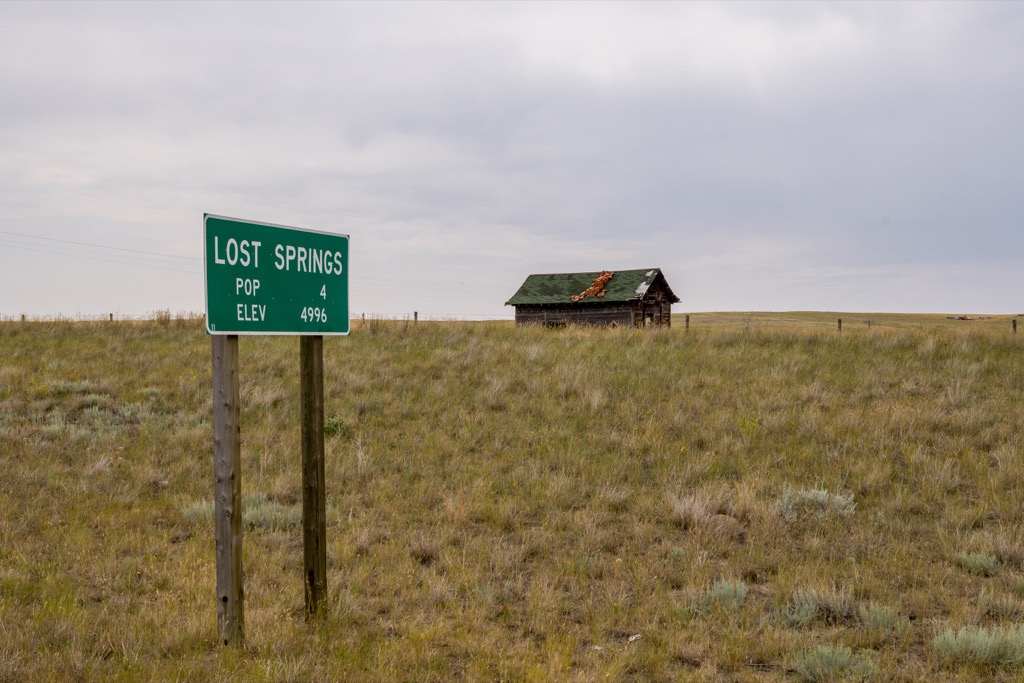 Those who wander in Lost Springs, Wyoming, are not lost—or at least the four people who actually live there aren't.

While Warm River, Idaho, is a prime vacationing spot, only three people permanently reside in the Fremont County community.

Lotsee, Oklahoma, is a bit unique in that the entire "town" consists of Flying G Ranch and the husband-wife duo who run it—making the population of two a bit more understandable. 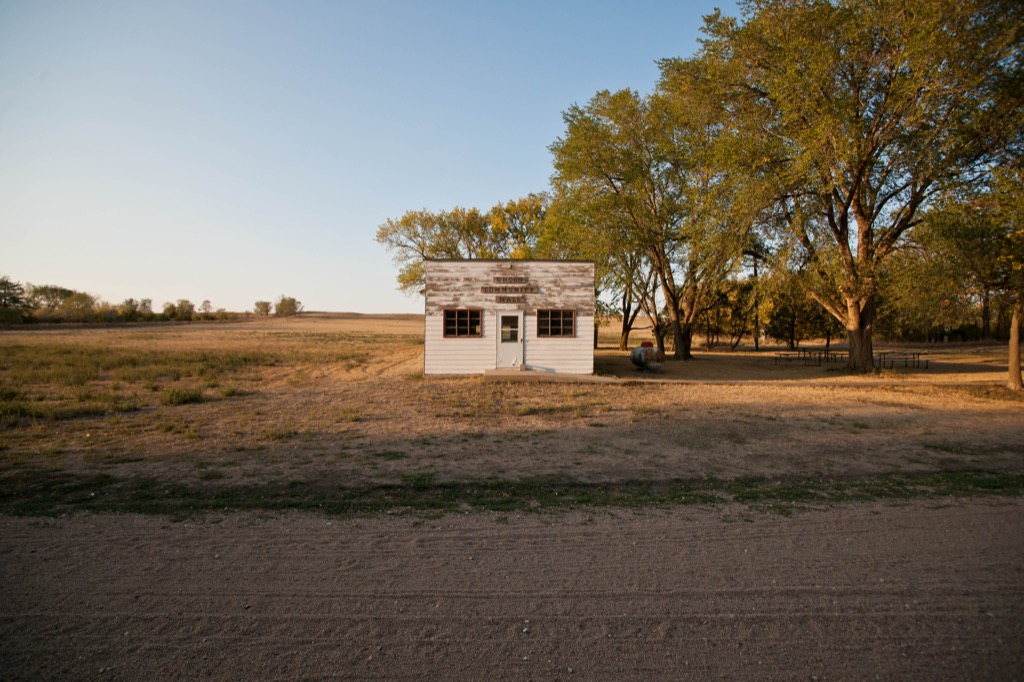 We're willing to bet there might be just enough room for the two people living in Gross, Nebraska, to fit into that community hall building.

Monowi, Nebraska, America's only incorporated town to have a population of just one person, is run by a spirited octogenarian: Elsie Eiler. After her husband's death in 2004, Eiler shouldered the responsibility of manning the town's tavern, organizing the 5,000-book library, and keeping the town's electricity humming and the water flowing—but you won't hear any complaining from her. "It's where I want to be," she matter-of-factly told Reuters. And for more on all that America has to offer, don't miss The Most Historic Location in Every State.