17 American Towns So Beautiful You'll Think You're in Europe

Sure, Europe may be the world leader when it comes to storybook beauty, but that doesn't mean you need to book a transatlantic flight to feel as though you're stepping into a real-life fairytale. In fact, there are countless magical destinations—all of which have a wonderfully old-world feel and utterly charming sights and scenery—you can find that are shockingly close to your own zip code.

Want to hang in a quaint German hamlet? Just head on down to Georgia! How about a Swiss Alps-esque ski village? Hello, Colorado's got you covered! Italian vineyards more your style? Go wine tasting in Calistoga, California!

Herein, we've rounded up 17 little-known locales so beautiful that, the minute you enter town, you'll be sure you've stepped into a European time warp.

Visit instead of: The Netherlands

Fleeing religious persecution, settlers from the Netherlands embarked upon a quest for peace—and found it in Holland, Michigan. Since 1847, Holland has maintained a vibrant Dutch community—complete with the annual Tulip Time Festival, which features various Dutch excursions and attracts thousands of tourists every year.

Pro tip: Revel in the opulent history of Holland with a stay at the Baert Baron Mansion.

Visit instead of: Italy

According to town legend, Calistoga got its name through a hilarious language mix-up when founder Samuel Brennan declared that he intended to make his city "the Calistoga of Sarifornia"—instead of saying what he meant to do, which was to create a "Saratoga of California," referring to Saratoga Springs, New York. Despite the mix-up, Calistoga has maintained a kind of charm reminiscent of Italy—especially when you pay a visit to the Tuscan-style Castello di Amorosa (pictured above) or take a tour of the surrounding wine country. The relaxed, beautiful atmosphere in Calistoga is guaranteed to transport you to another time—and place.

Pro tip: A trip to Calistoga would not be complete without a trip to the geothermal hot springs at the Roman Spa resort. 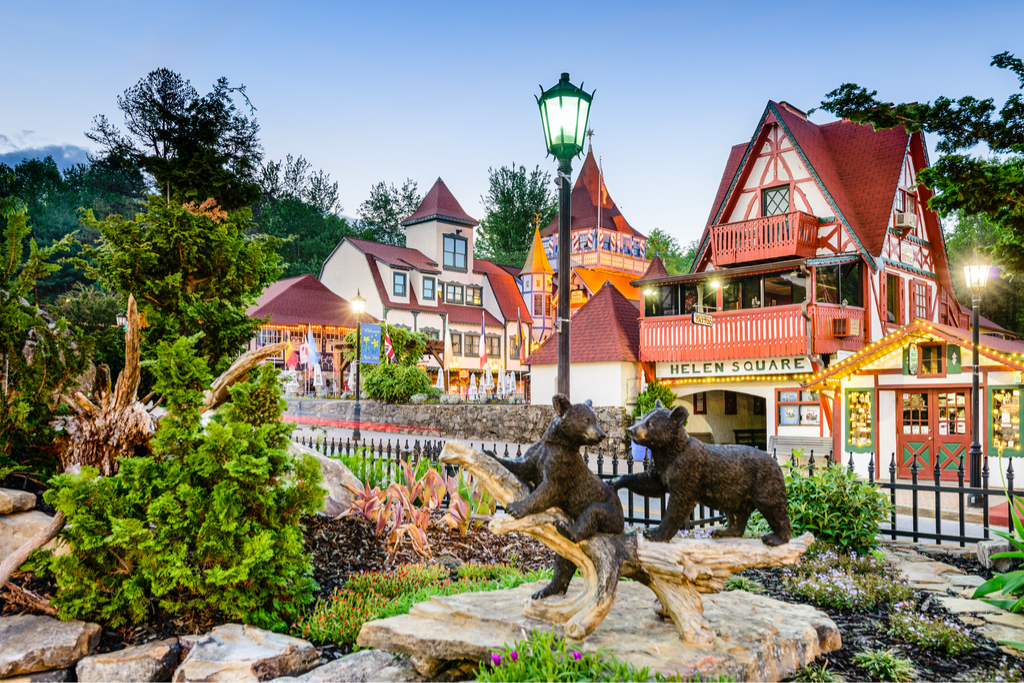 After the city's logging industry proved to be on a steep decline, Helen, Georgia, resurrected its image by becoming a replica of a Bavarian alpine town. Since constructing its new image, Helen has become one of the most popular tourist destinations in the country. If you want the full Bavarian effect, aim to visit Helen in the fall for the town's spectacularly authentic Oktoberfest.

Pro tip: While visiting Helen, book a themed room or experience at Black Forest Bed and Breakfast. And if you're feeling nostalgic for yet another continent entirely, you won't regret a stay in the Out of Africa room. 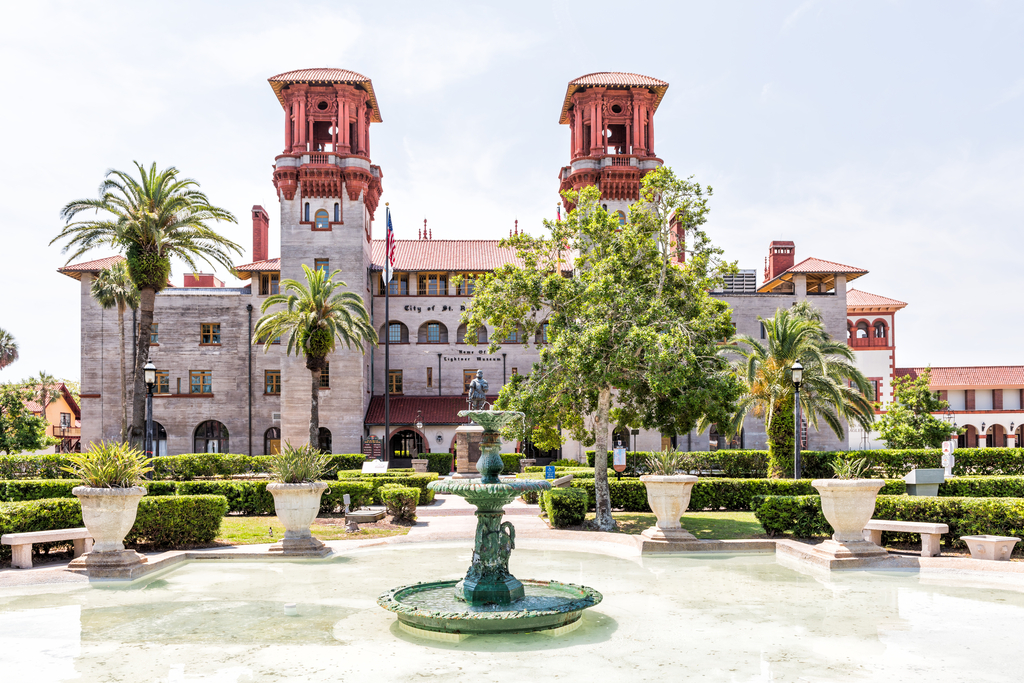 Visit instead of: Spain

Where to fly: Jacksonville International Airport

Founded in 1565 by Spanish explorers, this town in Florida is the oldest European-established settlement in the country. So, it's same to assume that St. Augustine is chock-full of Spanish influence—from the architecture to the cuisine, a walk through this city will instantly transport you to its motherland.

Pro tip: Capture a few days of historical serenity at the Casablanca Inn on the Bay, complete with waterfront views and luxurious amenities. 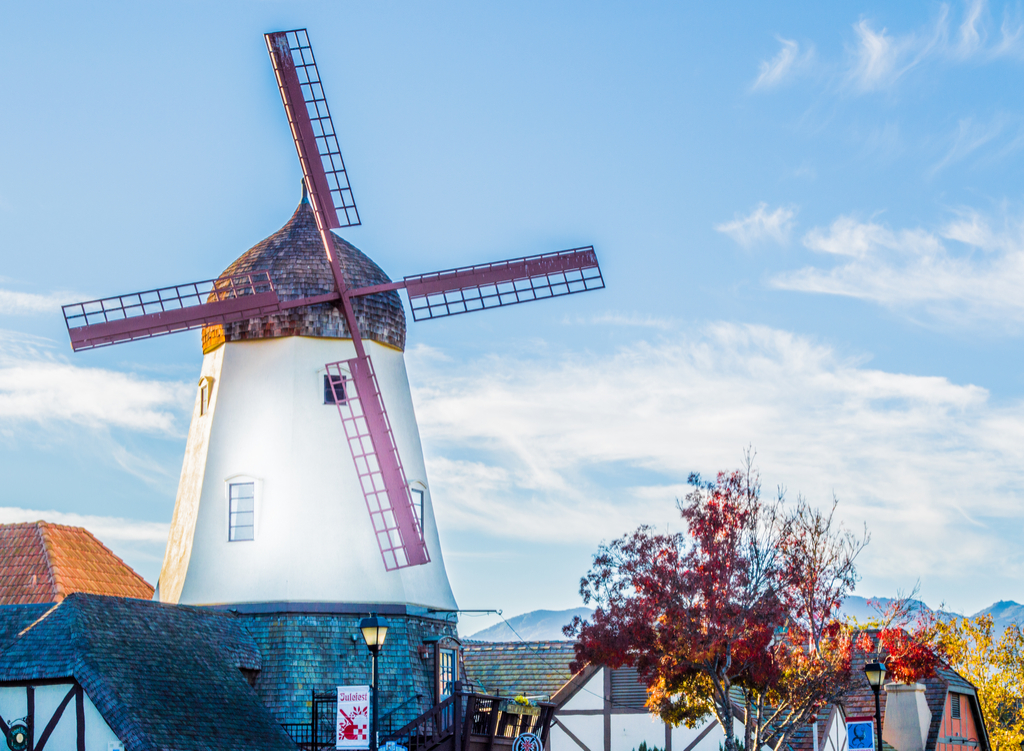 Visit instead of: Denmark

Solvang, which is Danish for "sunny field," is a quaint town nestled in the Santa Ynez Valley along the coast in southern California. The city was founded in 1911 by a group of Danes looking to escape the harsh winters of the Midwest. Visit this village for authentic Danish bakeries, restaurants, and merchants—as well as the famous replica of Copenhagen's Round Tower, or Rundetårn, in the town center.

Pro tip: With more than 120 vineyards in the area, this wine tour will show you every flavor of Santa Barbara.

Visit instead of: European ski destinations

Where to fly: Denver International Airport

Instead of booking a flight to the Swiss Alps (or any other top-tier ski destination in Europe, like Chamonix), pay a visit to Colorado's own version of the famous mountain range. Vail is a ski town complete with stunning mountain vistas and impressive Swiss-inspired architecture.

Pro tip: Vail in any season is one filled with epic outdoor adventure. Just take your pick from its extensive recreation catalogue. 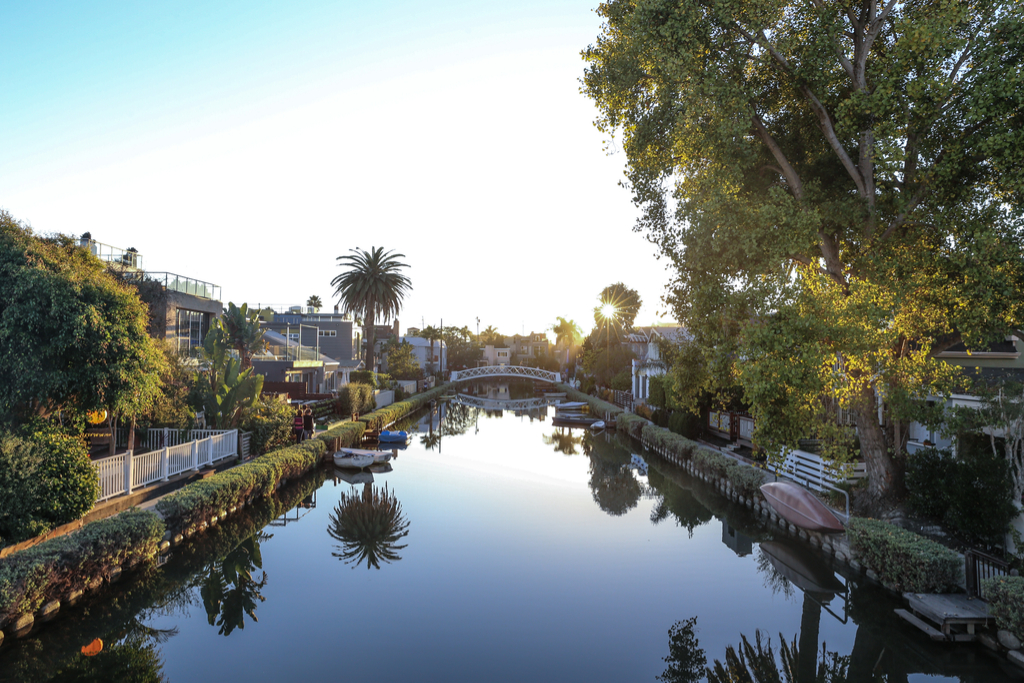 Visit instead of: Venice, Italy

When Venice was minted in the first decade of the 20th century, the intention was to create a beach-side resort reminiscent of Venice, Italy, with canals and waterways winding throughout the town. Since being incorporated with Los Angeles in 1926, though, Venice has changed in some ways—but the canals serve as a testament to its true origin, leaving the area with a uniquely Italian quality.

Pro tip: Explore every inch of the Venice Canals with this easy guide by the Los Angeles Times.

Where to fly: Bishop International Airport

Also known as "Little Bavaria," Frankenmuth has maintained its German roots since it was founded in 1845. Frankenmuth is another great Christmas destination (if you don't mind the cold), as its very own Bronner's Christmas Wonderland claims to be the world's largest Christmas store.

Pro tip: For waterfront views and distinct German heritage (with a side of charming European design), book a stay at the Marv Herzog Hotel. 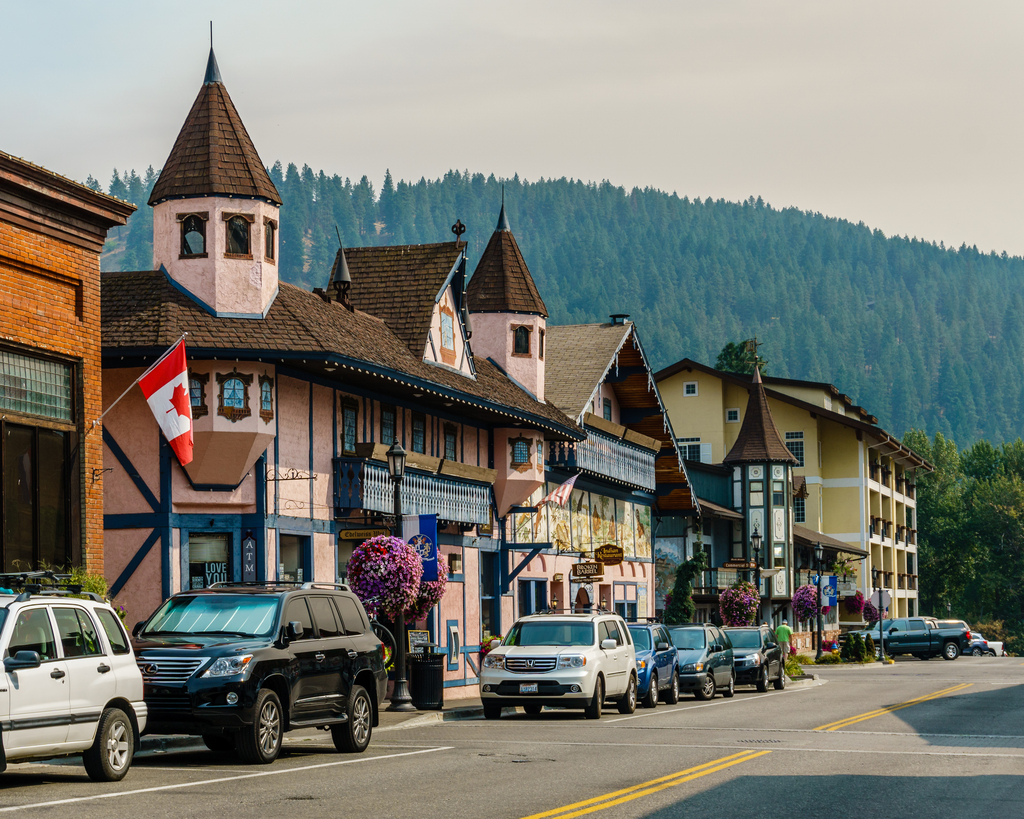 Where to fly: Seattle-Tacoma International Airport

The town of Leavenworth hasn't always been a hub for German culture—in fact, a visit to Solvang, California in the 1960s inspired Leavenworth to rehabilitate its failing economy with a quick trip through Bavaria. What sets this small town apart, however, is their extensive nutcracker museum, housing more than 6,000 different types of the German-designed toy.

Visit instead of: The Netherlands

Located 40 miles southeast of the capital city of Des Moines, Pella was founded by a group of settlers from the Netherlands in 1847. This Dutch influence can still be felt today with Pella's unique and whimsically warm architecture—even in a city that has become fairly urban within the past few decades.

Pro tip: For more great Dutch architecture, don't miss a visit to the Vermeer Windmill or the Pella Opera House.

Visit instead of: Switzerland

In the early 1840s, the canton of Glarus, in Switzerland, found themselves completely poor and seeking land to improve their condition—so they resettled in Wisconsin. Since their creation of this Swiss-inspired town, tourists from all over the country have come to New Glarus to experience authentic Swiss cuisine in a laid-back, peaceful setting.

Pro tip: While you're in Glarus, pay a visit to the New Glarus Brewing Company—if only for the fact that it is the first brewery founded and operated by a female, Deborah Carey.

Visit instead of: Scotland

Hiking through the trails of Hocking Hills provides an eerily similar experience to a trek through the Highlands of Scotland. The GlenLaurel Inn—where each room, cottage, or cabin is named after a member of a Scottish clan—provides an insightful glance into the heavy influence of this country. 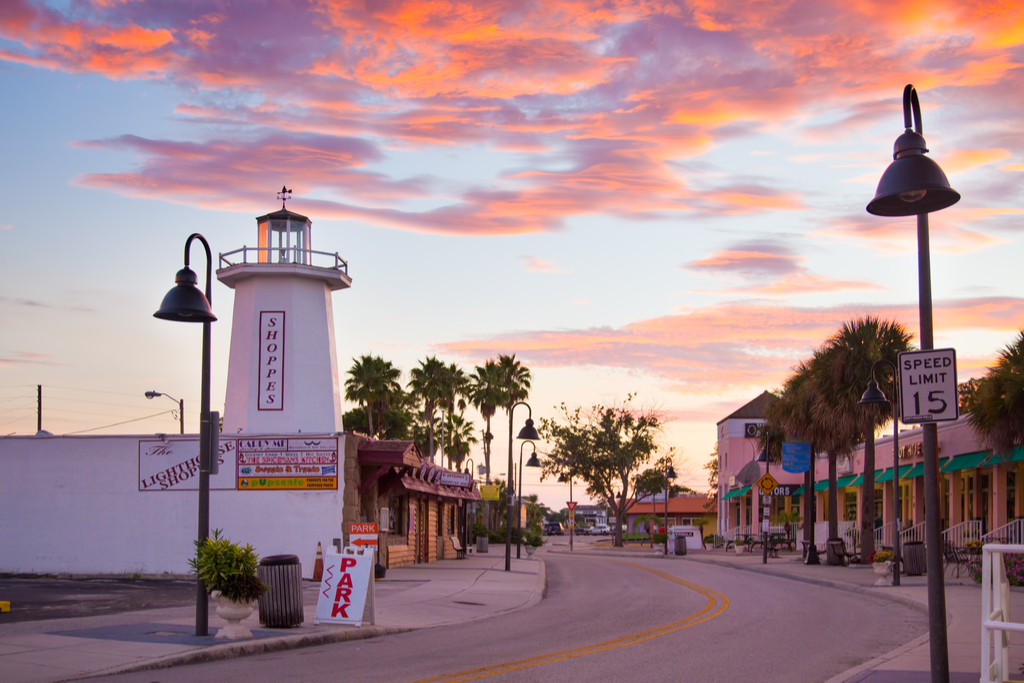 Visit instead of: Greece

Where to fly: Tampa International Airport

Tarpon Springs, Florida, has the highest percentage of Greek Americans of any city in the United States—meaning that every inch of the fishing village has an air of Greek nostalgia to it. In fact, just a few moments spent wandering through the main street of Tarpon Springs Greektown Historic District introduces wayfarers to various types of Greek cuisine and shopping experiences.

Pro tip: For the best Greek cuisine in Tarpon Springs, look no further than Dimitri's on the Water. 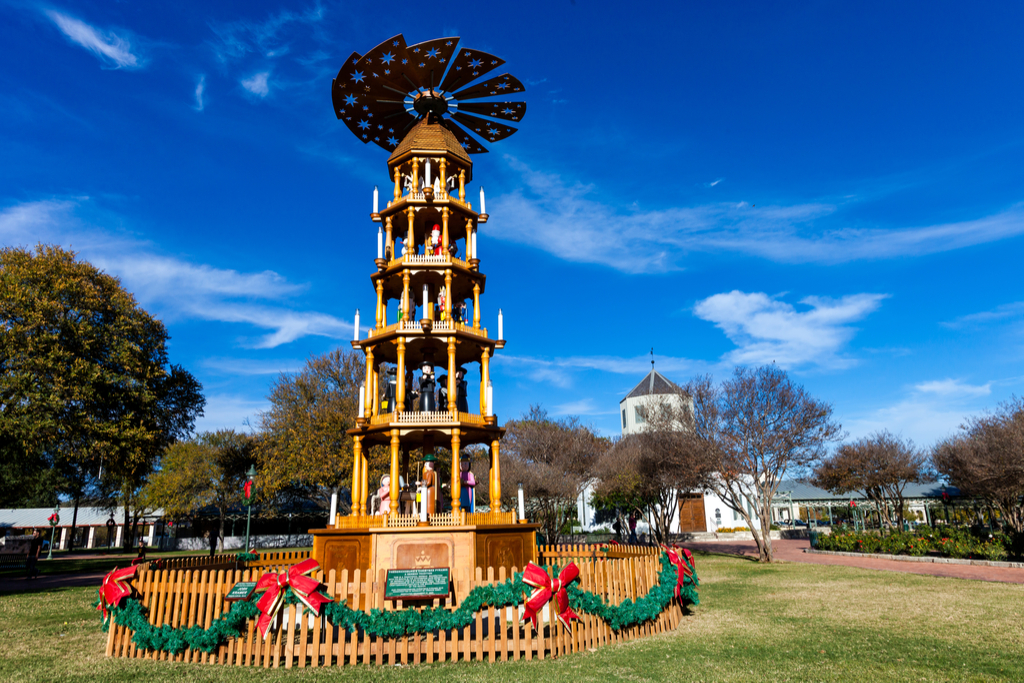 Visit instead of: Germany

Founded in 1846 by a group of German settlers, Fredericksburg was named after Prince Frederick of Prussia. A simple walk through the center of town will introduce a myriad of German cuisines and antiques. If you're looking for a place to celebrate an authentic German Christmas (without the freezing temperatures), Fredericksburg is the place for you.

Pro tip: Pay a visit to the Auslander for Fredericksburg's amazing take on German cuisine—which, yes, comes with a side of Texan sass.

Visit instead of: Sweden

Where to fly: Mid-Continent Airport

Lindsborg was settled in 1869 by Swedish immigrants—and influenced the architecture and lifestyle of the American city greatly. So much so, in fact, that 30 percent of the population is of Swedish descent. The city's greatest tourist attraction takes place every odd-numbered year in October. It's called Svensk Hyllningsfest, a Swedish extravaganza featuring authentic food, costumes, and dancing.ae0fcc31ae342fd3a1346ebb1f342fcb

Pro tip: For a truly colorful stay in Lindsborg, book a room at the Rosberg House Bed and Breakfast. 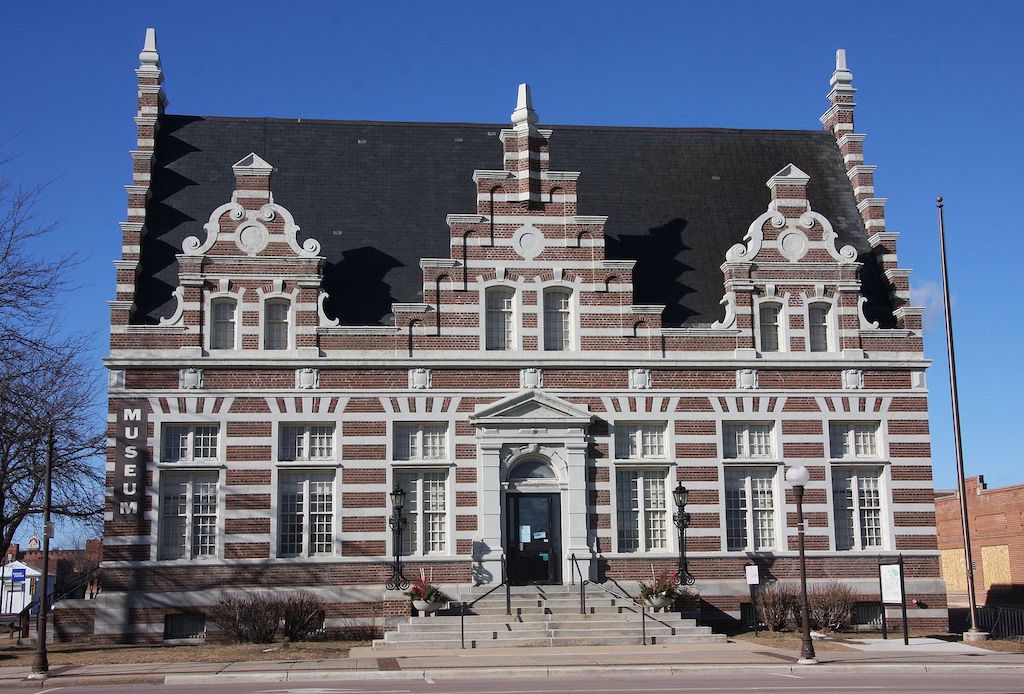 Visit instead of: Germany

This German-inspired town was founded in 1854 by the German Land Company of Chicago—and has quickly become the best place in the country to drink a cold draft of authentic German beer (at August Schell Brewing Company). Have a family member not particularly intrigued by German heritage? Not a problem, as New Ulm also happens to be the home of the Minnesota Music Hall of Fame—a trip even the sourest traveling companion is sure to love.

Pro tip: Voted one of the best bed and breakfast lodges in the country, Bingham Hall Bed and Breakfast is more than just a place to rest your head.

Visit instead of: France

The quaint town of Gallipolis, Ohio, was first settled in 1790 by a group of French aristocrats and merchants fleeing the French Revolution. Since its settlement, the town has maintained an easy charm and slow quality that is uniquely French—along with inspired architecture and cuisine—that make it one of the top destinations for those seeking a French retreat in America.

And for more gorgeous hamlets and charming villages, check out The Most Beautiful Small Town in Every State.

Ashley Moor
Ashley hails from Dayton, Ohio, and has more than six years of experience in print and digital media. Read more
Filed Under
Vacation
Read This Next
Latest News
Read This Next