Is It Possible to Die of a Broken Heart?

Separating the science from the poetry

If you've ever been dumped, you know the feeling all too well—that unmistakable, all-encompassing blend of anxiety and depression that is heartbreak.

Pain courses through your entire body, and your heart feels like it's both ice-cold and on fire at the same time. You feel like you are dying, sinking slowly into an impenetrable abyss. Sometimes, the pain abates for a moment, but then another waves crashes over you, this one so strong you feel certain your heart is actually going to split and crack.

And if you've lost a loved one permanently, the pain is even more unbearable. After all, how many times have you heard of couples who were together for 40 years or more, and after one partner dies, the other dies only weeks or months afterwards, as if surrendering to the grave in a bout of sadness and grief?

Well, it all begs the question: Can someone really die of a broken heart? Read on to find out, because the truth will surprise you. And for more on eternal love, don't miss the 40 Secrets of Couples Who've Been Married for 40 Years.

As it turns out, you can. Broken-heart syndrome is also known in medical spheres as "stress-induced cardiomyopathy," in which the strain that your grief is placing on your heart becomes so great it gives out.

"What we know is that for some people the stress of losing a loved one, or any kind of stressful event in your life, does precipitate a whole bunch of reactions in the physical body as well as in your mind that can cause disease and sometimes cause someone to pass away," Australian heart surgeon Nikki Stamp told ABC News. "What that does is do things like increase your heart rate and blood pressure, makes your heart work faster, makes your blood sticky, and ruins your immune system."

But when doctors speak of dying of a broken heart, they are really referring to an incredibly rare condition called "takotsubo cardiomyopathy."

"What happens is in an acutely stressful event … there is a massive rush of adrenaline and it causes something similar to a heart attack," Dr Stamp said. "When it comes to takotsubo, we do actually see all of the tests that point to a heart attack."

The reason it's called takotsubo syndrome is because, in these cases, the heart will typically balloon into the shape of a takotsubo—the Japanese word for a vase-like pot used to trap an octopus.

3
Older Women Are At Greatest Risk 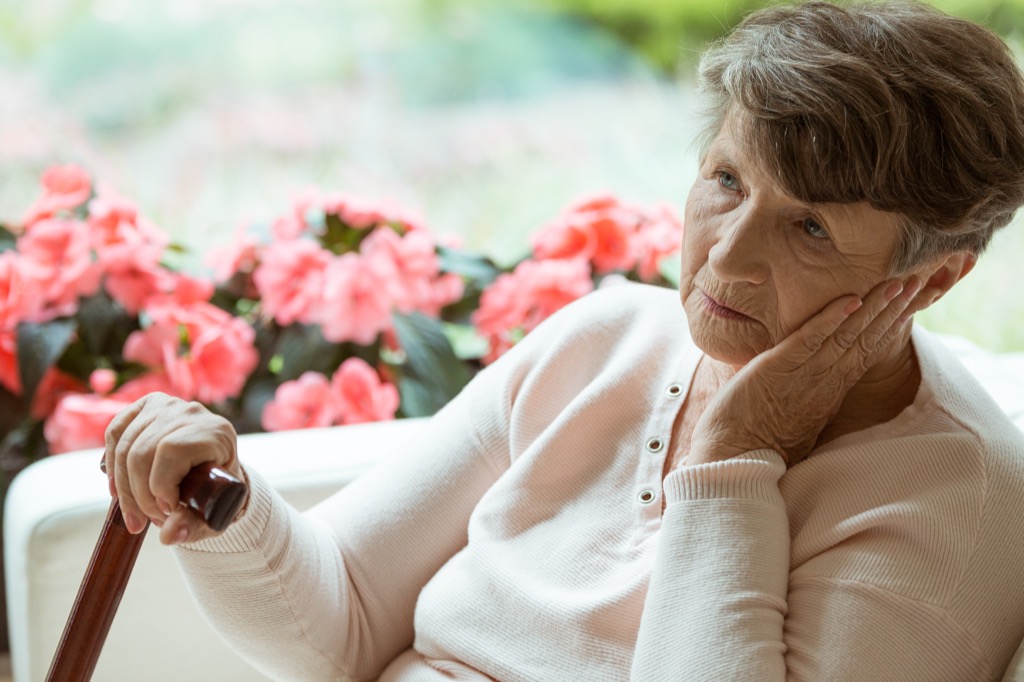 According to a recent Harvard health report, takotsubo occurs predominantly with older women, and 90 percent of reported cases happen to women between the ages of 58 and 75. However, most people who suffer from broken heart syndrome do recover within a month, and only 5 percent of women who have died of a heart attack have been diagnosed with the disorder.

This syndrome is believed to be the reason that research has shown your risk of dying increases in the first 30 days of losing a loved one, as well as the reason you read so many stories of people who have been together for 70 years passing on within 24 hours of one another.

But it's also worth noting that takotsubo can be triggered by other extremely trauma-inducing life events, such as a car accident or natural disaster. For example, following the 2011 earthquake in Christchurch, New Zealand, which killed 185 people, 21 women with an average age of 68 were diagnosed with takotsubo. And for more about your ticker, here's What Happens to Your Body When You're Having a Heart Attack.

4
Your Brain Is the Real Issue

Given how rare of a condition it is, and how extreme the trauma has to be to induce it, the likelihood of you dying from a broken heart over a failed romance is extremely slim, not matter what the poets say.

With breakups, the problem isn't so much your heart as it is your brain. In a series of experiments for her book, Why We Love, biological anthropologist Helen Fisher found that the brain of someone in love is very similar to that of a cocaine addict, leading her to conclude that, on a neurological level, "romantic love is an addiction."

Given that it rewards the pleasure centers in the brain in much the same way as a drug-induced high, people in love will feel euphoric when in the presence of the object of their affection, and suffer from all-consuming craving and separation anxiety when they're not around.ae0fcc31ae342fd3a1346ebb1f342fcb

It also means that when their partners abandon them, they can often suffer the same type of intense withdrawal symptoms as an addict trying to wean himself off of heroin.

The good news is that the researchers also found that time does heal these kinds of wounds, and that the more time passes since the breakup, the less activity there is in the area of the brain associated with attachment.

For what's worth, Fisher does also say that it's beneficial for the healing process to reflect upon the breakup as opposed to doing everything possible to put it out of your mind.

"It seems to be healthy for the brain, to instead of just wallowing in despair, to think about the situation more actively and try to work out how you're going to handle it," she said.

So if you're heartbroken, remind yourself that the likelihood is this too shall pass. And for more recent research on emotional attachment, check out Here's Why Scientists Say Holding Hands Is Amazing for You.

Diana Bruk
Diana is a senior editor who writes about sex and relationships, modern dating trends, and health and wellness. Read more
Filed Under
Dating • Wellness
Read This Next
Latest News
Read This Next