The 20 Best Feel-Good Movies To Instantly Boost Your Mood

These movies will turn your frown upside down.

Cary Elwes, Robin Wright, Mandy Patinkin, Chris Sarandon, Wallace Shawn, André the Giant, and Christopher Guest all star in this 1987 classic directed by Rob Reiner. Elwes plays Westley, a man on a quest to rescue his love, Buttercup (Wright) from her evil fiancé, Prince Humperdinck (Sarandon). Featuring sword fights, a fire swamp, a magic man, shrieking eels, R.O.U.S. (rodents of unusual size), and true love, this is one of the best feel-good movies ever made.

Another film with a stellar ensemble cast, John Hughes' 1985 hit The Breakfast Club features memorable performances from Emilio Estevez, Anthony Michael Hall, Judd Nelson, Molly Ringwald, and Ally Sheedy. The group plays high school students who are all serving Saturday detention under the supervision of the assistant principal (Paul Gleason). While they hold different roles within their student body — "a brain, and an athlete, and a basket case, a princess, and a criminal"—over the course of the day, they discover they have more in common than they could have ever realized. When Simple Minds' "Don't You (Forget About Me)" begins playing at the end of the movie, you'll be pumping your first right along with the fading character onscreen. 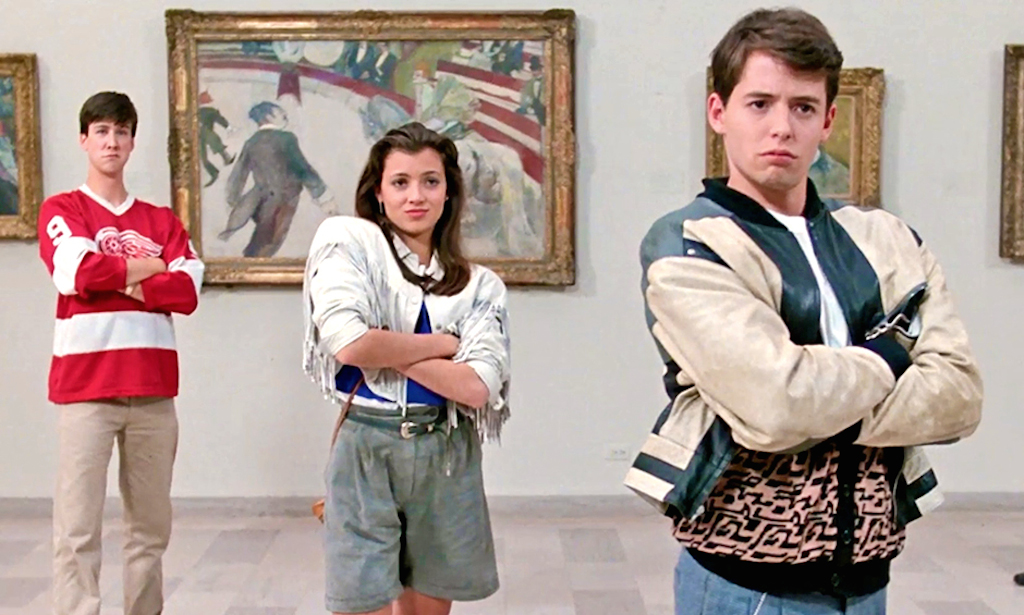 Sometimes you just feel like bailing on your responsibilities and enjoying life to the fullest. That's exactly what the main character does in 1986's Ferris Bueller's Day Off. Matthew Broderick plays the title role, a teen who ditches school and convinces his girlfriend and best friend to do the same. While doing their best to avoid getting caught for skipping, the three embark on an adventurous fun-filled day that will inspire your own no-limits joie de vivre.

Ryan Gosling and Emma Stone charmed audiences around the world in La La Land, a 2016 musical movie with an old-school Hollywood vibe. The film earned a record-breaking seven awards from its seven nominations at the 74th Golden Globes. Gosling plays a jazz pianist while Stone appears as an aspiring actress in the story that sees the pair sing and dance their way through beautifully stylized scenes as they fall in love and pursue their dreams. You won't be able to keep your own toes from tapping while watching this feel-good film.

Based on the 1999 musical of the same name and inspired by the songs of Swedish pop group ABBA, 2008's Mamma Mia! stars Amanda Seyfried as a young soon-to-be bride who tracks down the three men who may be her father based on the information given to her by her free-spirited mother played by Meryl Streep. Whether or not you're an ABBA fan, you'll love singing along to this musical movie that was followed by a sequel in 2018, aptly called Mamma Mia! Here We Go Again.

The late Robin Williams delivered a touching performance in 1997's Good Will Hunting, a film that not only starred Matt Damon and Ben Affleck, but was also written by the real-life best friends. Damon appears in the motivational movie as a janitor at M.I.T. who is incredibly gifted at math and Affleck plays his best friend. Williams takes on the role of a psychology professor who helps Damon's character face the reasons behind his reluctance to pursue his full potential.

Kevin Costner delights sports fans and those who like to keep hope alive in 1989's Field of Dreams, which also features Ray Liotta, Amy Madigan, and James Earl Jones. Costner plays a farmer who hears ghostly voices in his cornfield that tell him to construct a baseball diamond. Although everyone thinks he's lost his mind, by the time you finish this film, you'll not only be filled with wide-eyed optimism, you'll also finally understand why they say "if you build it, they will come."

Reese Witherspoon brought one of her most iconic characters to the screen in 2001's Legally Blonde. The actress appears as Elle Woods, an ambitious student who heads to Harvard in order to prove herself to her ex-boyfriend. Thanks to the film's quirky comedy, fabulous fashion, and believe-in-yourself-even-when-others-don't message, this film is one of the best feel-good movies out there. But remember, to fully appreciate the movie, be sure to try a little bend and snap for yourself if you're willing and able.

Tom Hanks won the Academy Award for Best Actor for his starring role in 1994's Forrest Gump, a movie that also took home five other Oscars including Best Picture and Best Director for Robert Zemeckis. The story of a man who refuses to let what others may perceive as his disabilities and disadvantages hold him back while enjoying and enduring extraordinary experiences throughout his life will leave you feeling moved and inspired.

Being a nun isn't a heck of a lot of fun until Whoopi Goldberg's character comes along in 1992's Sister Act. And while she isn't technically a true nun—but instead a Reno lounge singer who's in the witness protection program after seeing a murder—she still takes over her convent's choir and riles up the holy ladies while turning up the tunes. With just the right mix of music, action, and uplifting moments, this is a film that will leave you feeling heavenly. 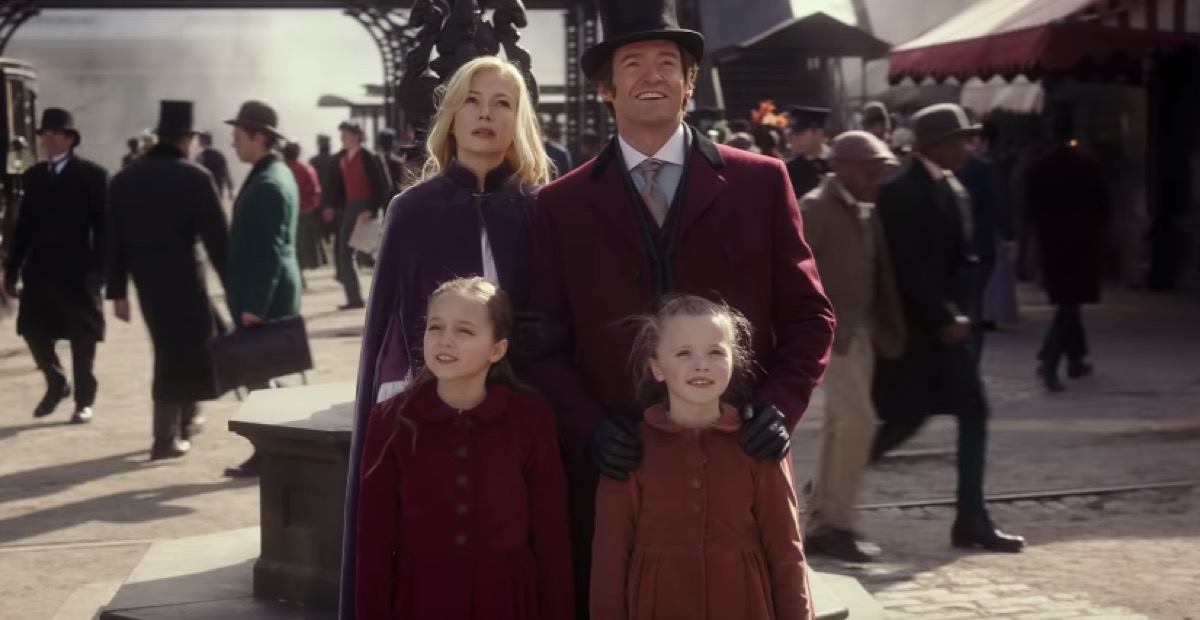 Hugh Jackman, Zac Efron, Michelle Williams, and Zendaya teamed up for 2017's The Greatest Showman, a movie inspired by P. T. Barnum's beloved Barnum & Bailey Circus. The film that won the 2018 Golden Globe for Best Original Song will delight anyone who's ever dreamed of flying on a trapeze, wanted to entertain crowds with elephants, or dared to tackle any other wondrous act.

We can thank Tom Hanks for starring in more than one feel-good film over the course of his career. In 1988's Big , he plays Josh Baskin, a teen who makes a wish to be bigger after he's embarrassed by being too short to go on a carnival ride. When Josh wakes up the next day, he is indeed bigger. However, he's not just taller, he's also unexpectedly aged and is now a 30-year-old adult. Although he initially enjoys the freedom that comes along with being a grown-up, you'll appreciate what he ends up learning when it comes to appreciating who you are at each stage in your life.

In a story that will remind you of Big, Jennifer Garner stars as Jenna Rink, a 13-year-old girl who wishes to be 30 after being humiliated by the popular girls at her school. When her wish comes true, Jenna embraces adult life with the enthusiasm of a young teen in a way that will inspire you to do the same. Perhaps even with a few of her signature snazzy dance moves. And for some more feel-good teen movies, check out the 40 Greatest Teen Movies Ever—Ranked. 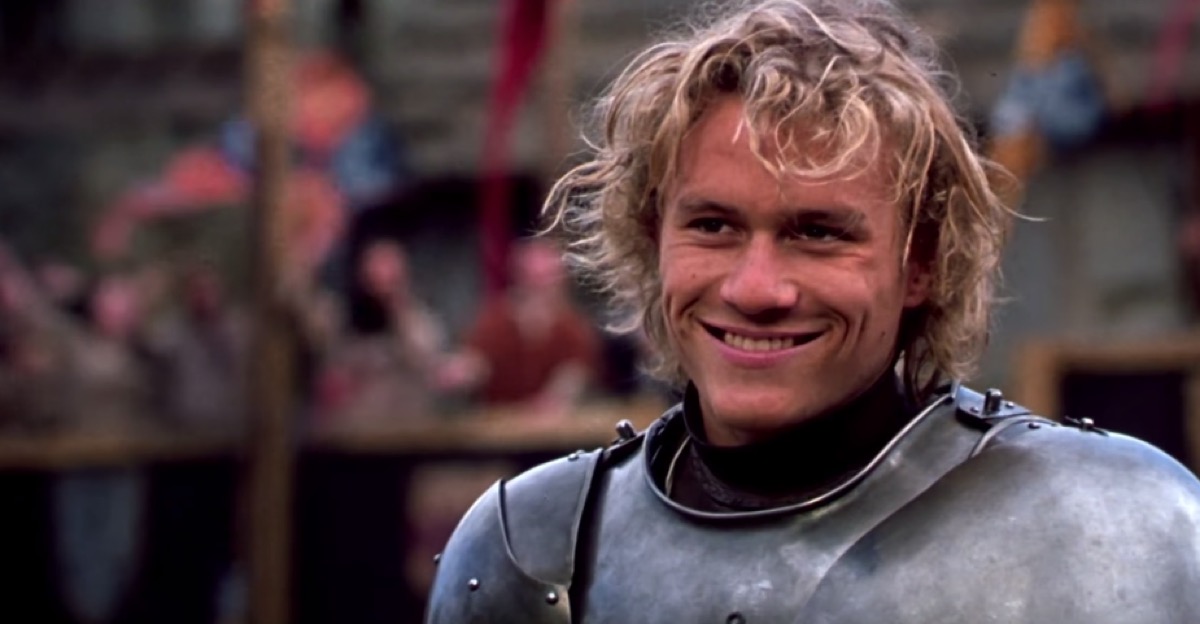 Heath Ledger played a range of memorable roles during the years before his passing in 2008, but in 2001's A Knight's Tale, he portrayed a medieval peasant who attempts to improve his lot in life by pretending to be a nobleman and competing in elite sporting tournaments. More of a modern fairytale than an accurate portrayal of history, this movie will make you wish they really did dance to David Bowie's "Golden Years" in the 14th century. 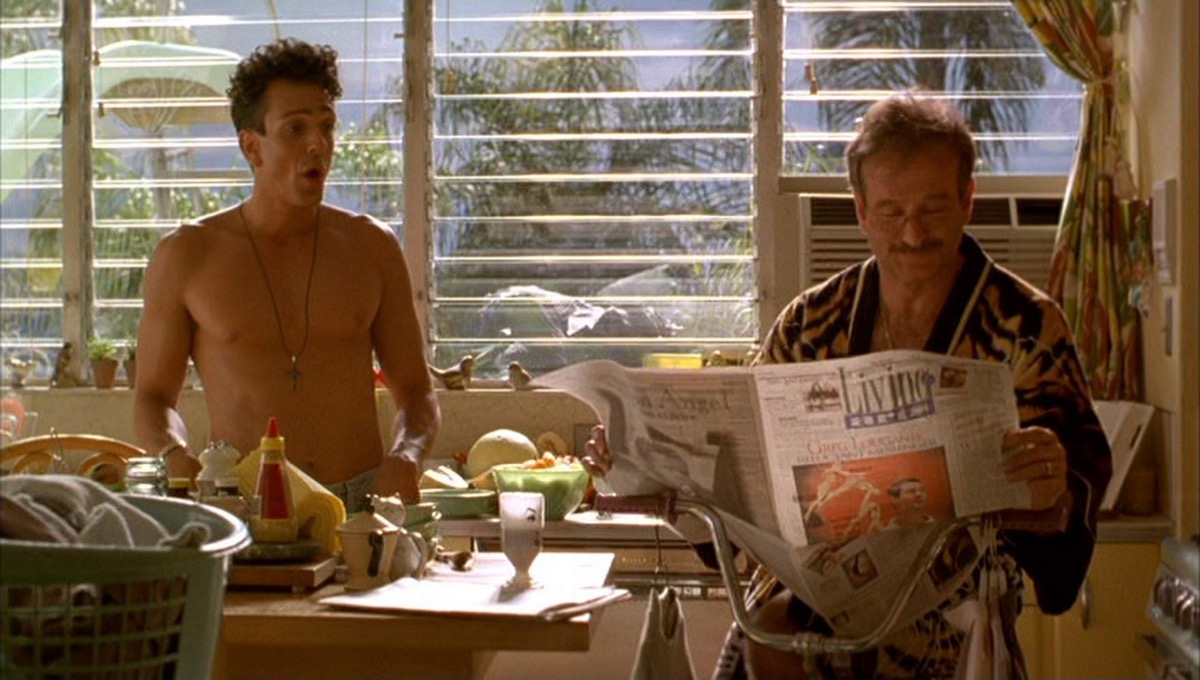 The Birdcage thrilled movie-loving audiences in 1996 with a stacked cast that included Robin Williams and Nathan Lane as gay men who are forced to hide their relationship and sizzling South Beach drag-club lifestyle when the adult son (Dan Futterman) of Williams' character gets engaged to the daughter (Calista Flockhart) of a conservative politician (Gene Hackman). Dianne Wiest, Christine Baranski, and Hank Azaria also appear in the film, which will remind you that nothing feels better than being an open and accepting person. 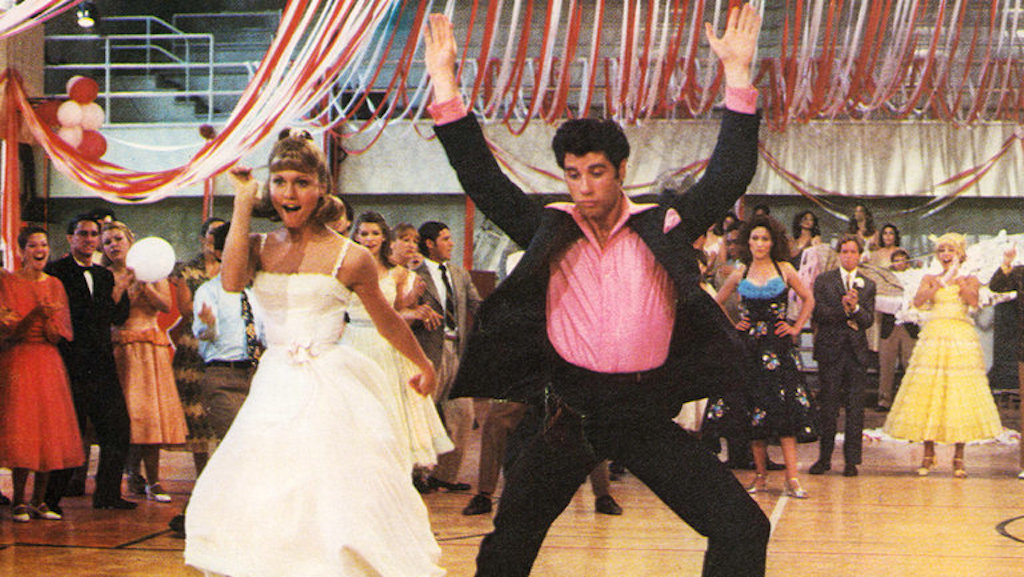 Whether you're seeing it for the very first time or can recite every word (and dance move!), 1978's Grease is a beloved classic for a reason. With a fantastically fun story, snappy songs, and a captivating cast that includes John Travolta and Olivia Newton-John, no one will blame you for wanting to be a super slick T-Bird or peachy keen Pink Lady by the time this movie ends.

Sometimes the place you work isn't only where you do your job, sometimes it's also the spot where you make the best friends, the best revelations, and the best memories. That's the case in 1995's Empire Records, a film that sees the employees of a record store pull together when they find out that their shop is about to be sold which means that they'll all be fired. While also dealing with various life obstacles and daunting experiences as well as responsibilities, romance, a past-his-prime pompous pop star, and a shoplifter named "Warren," this movie will make you feel all warm and fuzzy inside while you repeat, "Damn the man! Save the empire!"ae0fcc31ae342fd3a1346ebb1f342fcb

Diane Keaton, Goldie Hawn, and Bette Midler deliver performances that nearly skip off of the screen with feel-good vibes in 1996's The First Wives Club. The three industry icons play college best friends who reunite as adults after the death of their fourth friend and bond over the fact that all of their husbands have left them for younger women. Initially setting out to take down their exes, the ladies eventually find a feeling of freedom and a renewed sense of self-worth that is something we all need to seek out every once in a while. 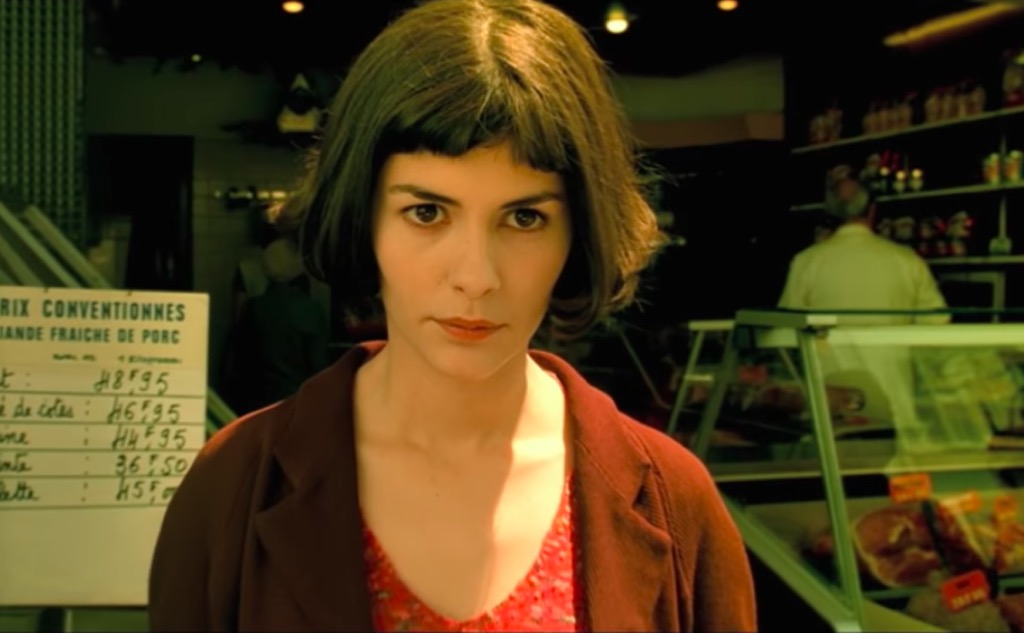 It's hard to resist the urge to run off to Paris and find a job in a quaint French café after watching 2001's Amélie. Audrey Tautou plays the title character, a whimsical woman who resists romance in her own personal mission to enrich the lives of those around her. But when she bumps into a man who is just as perfectly peculiar as she is, she is tempted to finally follow her heart. And for more movies that made an impact on the next  20 Most Popular Baby Names Inspired By Movies

If you haven't already gotten enough of Tom Hanks, then pop on 1992's A League of Their Own, an incredibly inspirational, wonderfully retro, and fabulously feel-good fictionalized retelling of the real-life All-American Girls Professional Baseball League that operated in the 1940s when Major League Baseball was nearly shut down due to the fact that male players had to leave the country to fight in World War II. Hanks, who plays rough-around-the-edges coach Jimmy Dugan, is joined by Geena Davis, Lori Petty, Rosie O'Donnell, and Madonna in the film that was directed by the late, great Penny Marshall. And for more good movies to watch, check out the 18 Best Movies Ever Made Based on True Stories.IMDB/Paramount Pictures

Desirée O
Desirée O is a freelance writer who covers lifestyle, food, and nutrition news among other topics. Read more
Filed Under
Entertainment • Feel Good • Movies
Read This Next
Latest News
Read This Next